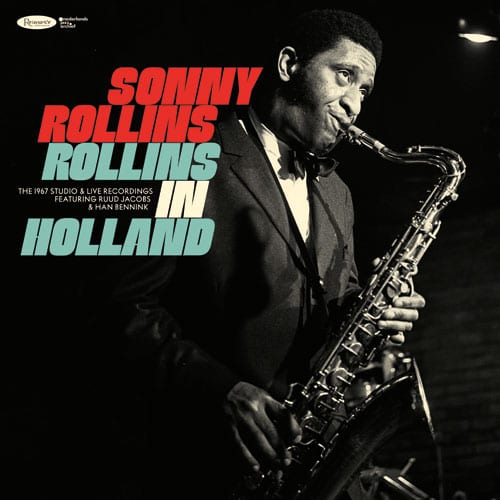 Rollins in Holland documents three previously-unreleased Sonny Rollins performances from May 1967. Resonance Records has exhibited an attention to detail that’s second to none with this 2-CD or 3-LP set that includes a 24-page booklet with photos, extensive liner notes, and interviews. The vinyl was mastered by Bernie Grundman and pressed at RTI.

Historically the recordings help fill an important gap, as Rollins didn’t release any albums between 1966 and 1972—but he kept playing music. In the spring of 1967, he toured Holland, where he performed with two musicians from that country, bassist Ruud Jacobs and drummer Han Bennink. Some of those performances are captured here, and they mark—at least as far as recordings are concerned—the end of an era. When Rollins recorded again in 1972, he started adding instruments like electric piano, electric bass, percussion, and fusion-style electric guitar. So Rollins in Holland can be seen as a new capstone to the slate of recordings by the saxophone colossus in the all-acoustic trio format during the 50s and 60s.

That begins to tell you why Rollins in Holland deserves your attention, but there’s more—much more, in fact. This trio never rehearsed. This isn’t to suggest that the musicians freely improvised, as they were performing compositions that were standard repertoire for Rollins, and surely Jacobs and Bennink would have been familiar with songs like “Four,” “Love Walked In,” “Three Little Words,” and “Sonneymoon for Two.” Nonetheless, asking the trio to perform without rehearsing was a tall order. When soloists sit in with rhythm sections, as is common in some jazz clubs, the musicians sometimes exercise restraint until they become familiar with each other’s playing, and the pianist helps hold things together. But there was no pianist in this group, and this is Sonny Rollins we’re talking about, an artist who wasn’t known for playing it safe.

As it turns out, the same could be said of the musicians who joined him on the tour. When, in the liner notes to Rollins in Holland, Rollins says that the trio adopted a “take no prisoners” approach on the bandstand, he’s not engaging in hyperbole. With his big tenor sound and endless flow of ideas, Rollins plays in the exuberant and life-affirming manner that made him such a titan on the tenor. A force of nature himself, drummer Han Bennink pushes hard underneath, constantly driving the trio to new heights. With his big, fat, woody tone on the bass, bassist Jacobs stays in the pocket and provides a bulwark of support, offering a necessary counterbalance to a train that’s so high-powered it seems like it could fly off the rails at any moment.

I wish I could say the recordings are all of audiophile quality, but that’s not the case. There’s some good news, though. The first side of the album has clean sound with plenty of separation between the instruments, and when I listen to the unaccompanied tenor sax introduction to the opening track, “Blue Room,” I’m stunned by its presence and the beauty of Rollins’ playing. Sonically the May 5th concert performances are a notch above the May 3rd performance, but the May 3rd recordings are where the band really goes all out, with three performances over 19 minutes in length. Sonny Rollins fans will have their minds blown once again.

The Three Sides of Sufjan Stevens