Rather than being a blog in the purest, truest sense of the term, what follows is more an annotated picture album—a pastiche designed to give you a bit of the flavour of the Hi-Fi+ team’s recent trip to the Rocky Mountain Audio Fest in Denver, Colorado. This section of our album focuses on loudspeakers.

An RMAF banner hangs above the entrance to a gathering space located below the central atrium of the Marriott Denver Tech Center. On many evenings throughout the event, this space becomes the spot where a veritable who’s who of high-end audio comes to meet. 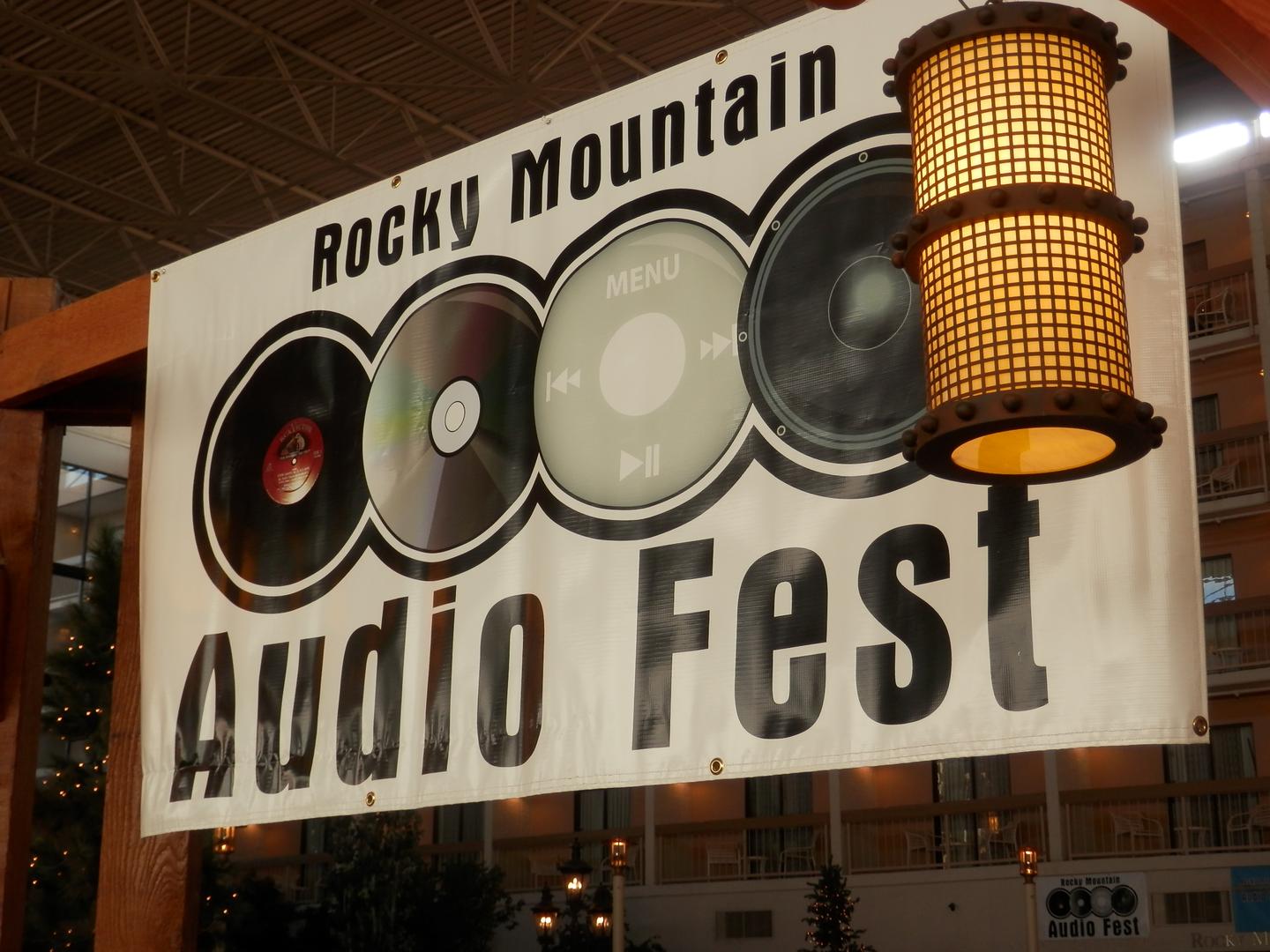 Most knowledgeable audiophiles agree that our industry owes a huge debt of gratitude to RMAF organizer Marjorie Baumert, whose tireless efforts have made the show the enduring success that it is. 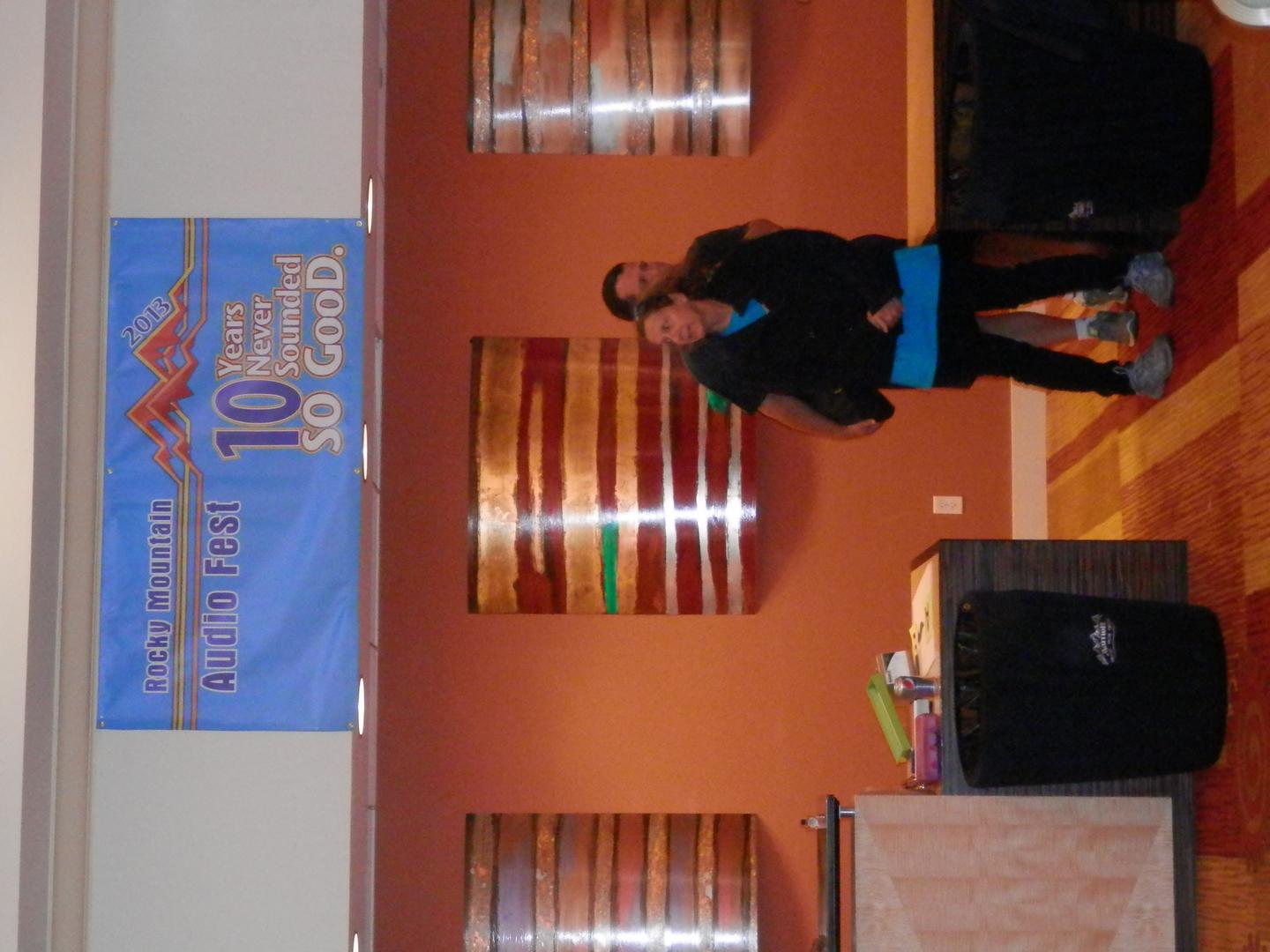 Live music is very much a part of RMAF, as shown by these images of a piano/violin duet and of an R&B-oriented blues band. No matter how good hi-fi gets, there’s no substitute for experiencing the real thing—a point that RMAF founders never forget. 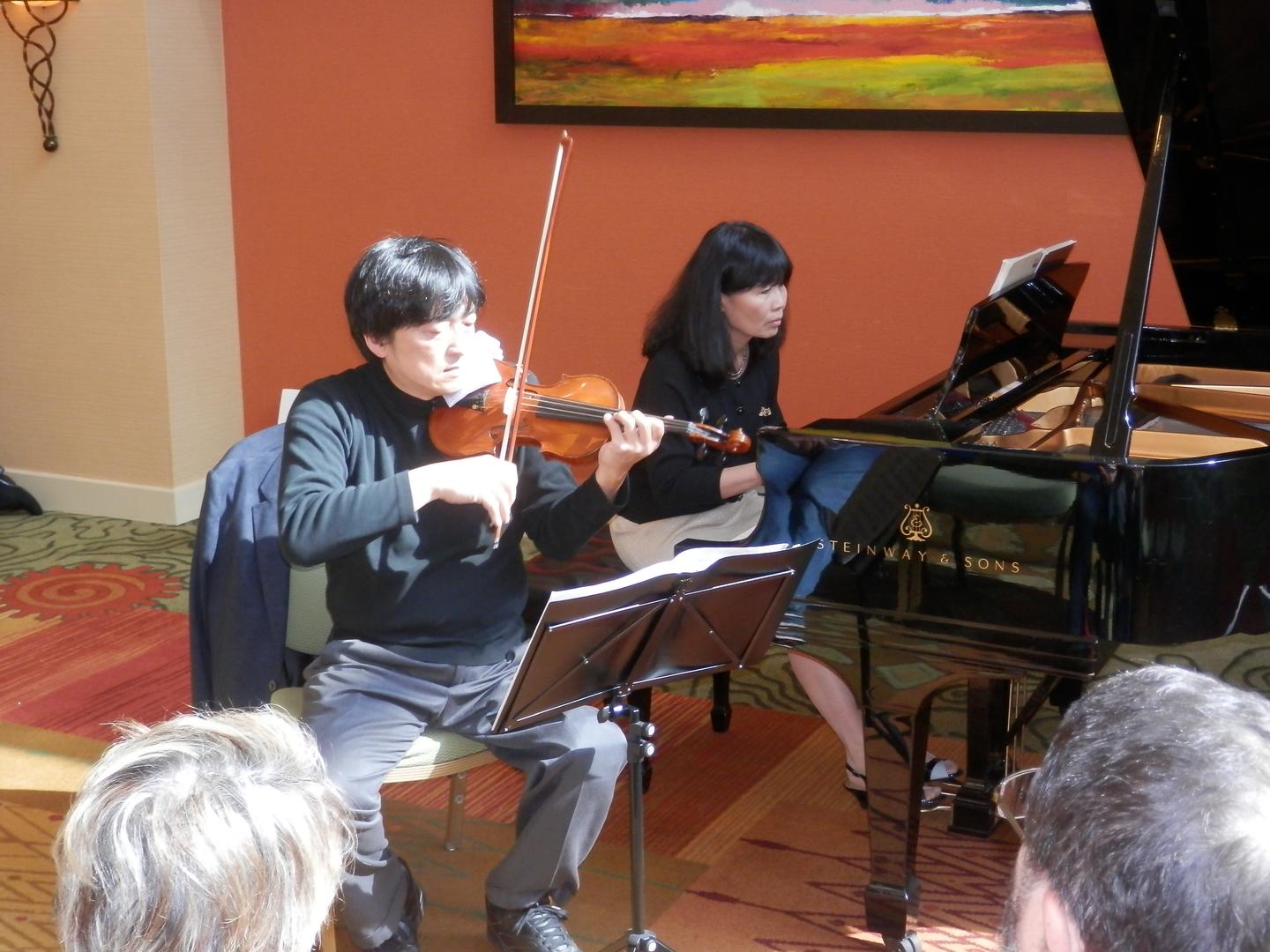 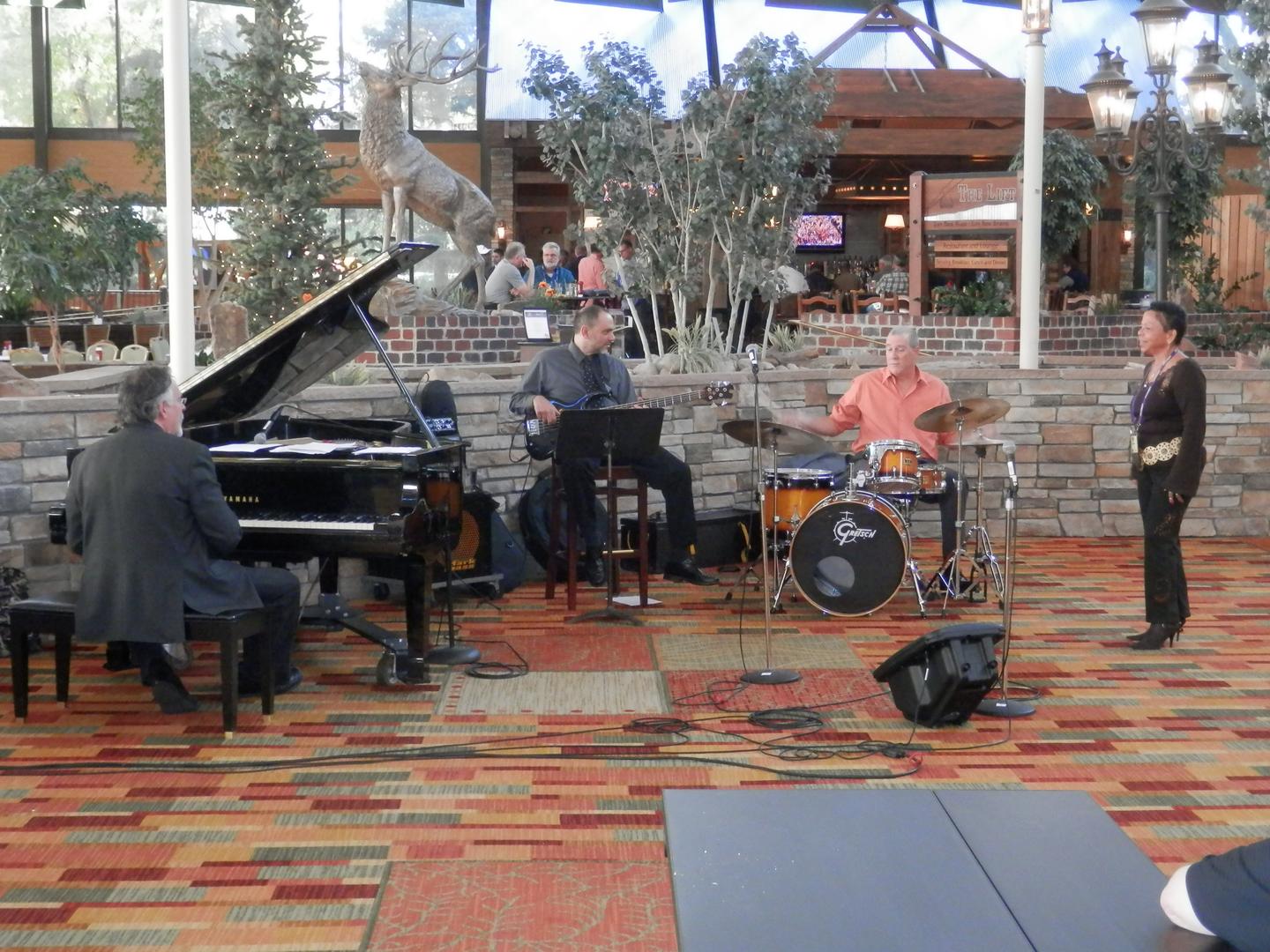 We’re audiophiles and proud of it: This year marks the 10th anniversary of RMAF, as commemorative event T-shirts proudly proclaim. 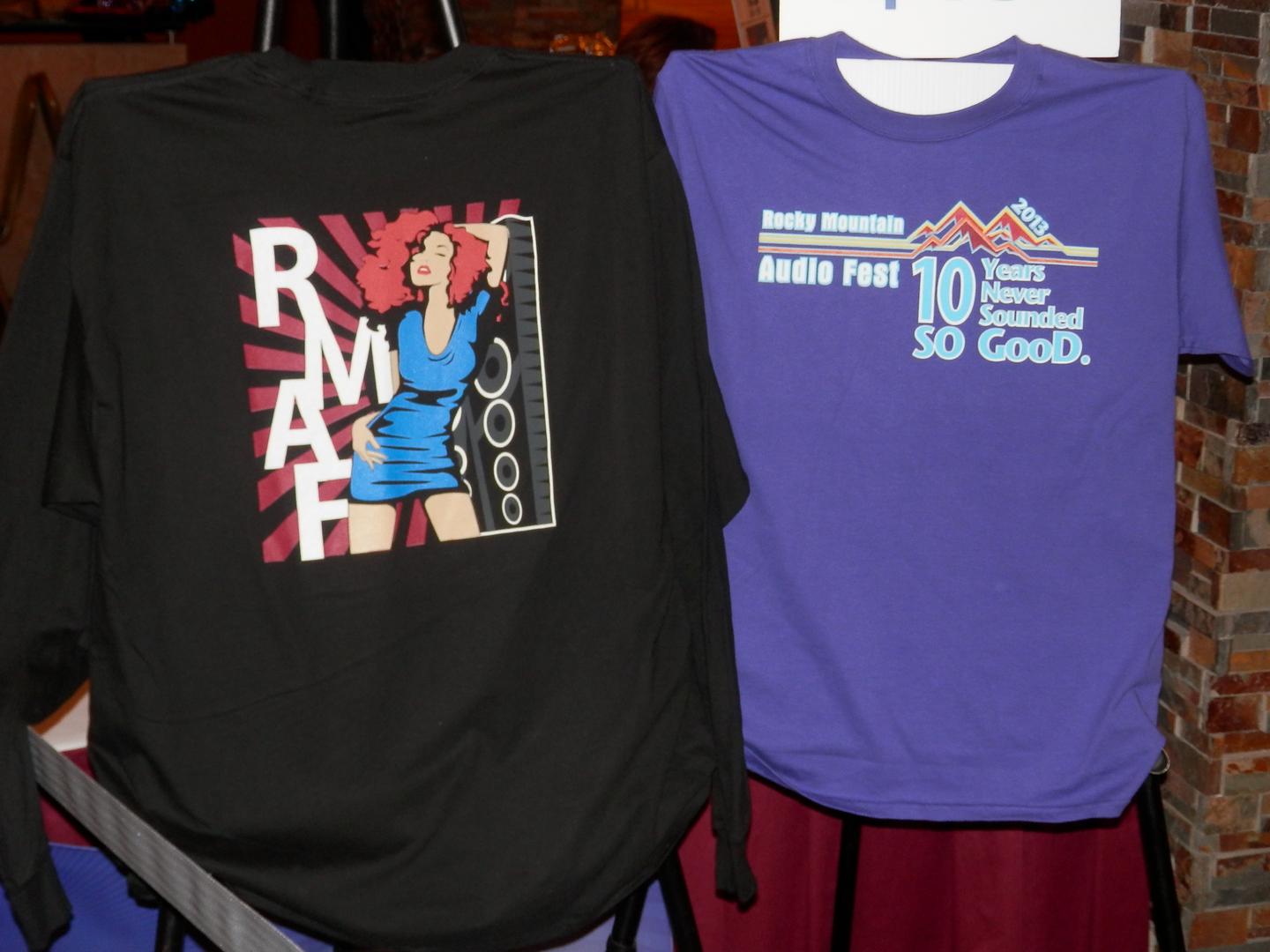 Most people associate the name Astell & Kern with terrific, high-res, pocket-size digital music players, but here we see something completely different from the firm: namely, the exotic and costly Castor monitors ($25,000/pr.), which feature ceramic mid-bass drivers, diamond tweeters, and enclosures made of billet-carved aluminium and composite materials.

Brodmann was a piano maker of note, who joined forces with Bösendorfer in the early 19th Century. The speakers that carry his name are equally noteworthy, with their genuinely piano-finished undamped, unbraced designs with resonant side panels owing more to musical instrument than loudspeaker design. They sound wonderful on the end of some good Electrocompaniet electronics

In the US, the British firm Naim Audio and the Scandinavian loudspeaker manufacturer DALI share a common distributor: The Sound Organisation, headed by British expat Steve Daniels. Thus, the firms teamed in a demo room highlighting Naim’s evolving family of NAIT-series integrated amplifiers and the DALI’s new Epicon loudspeakers. 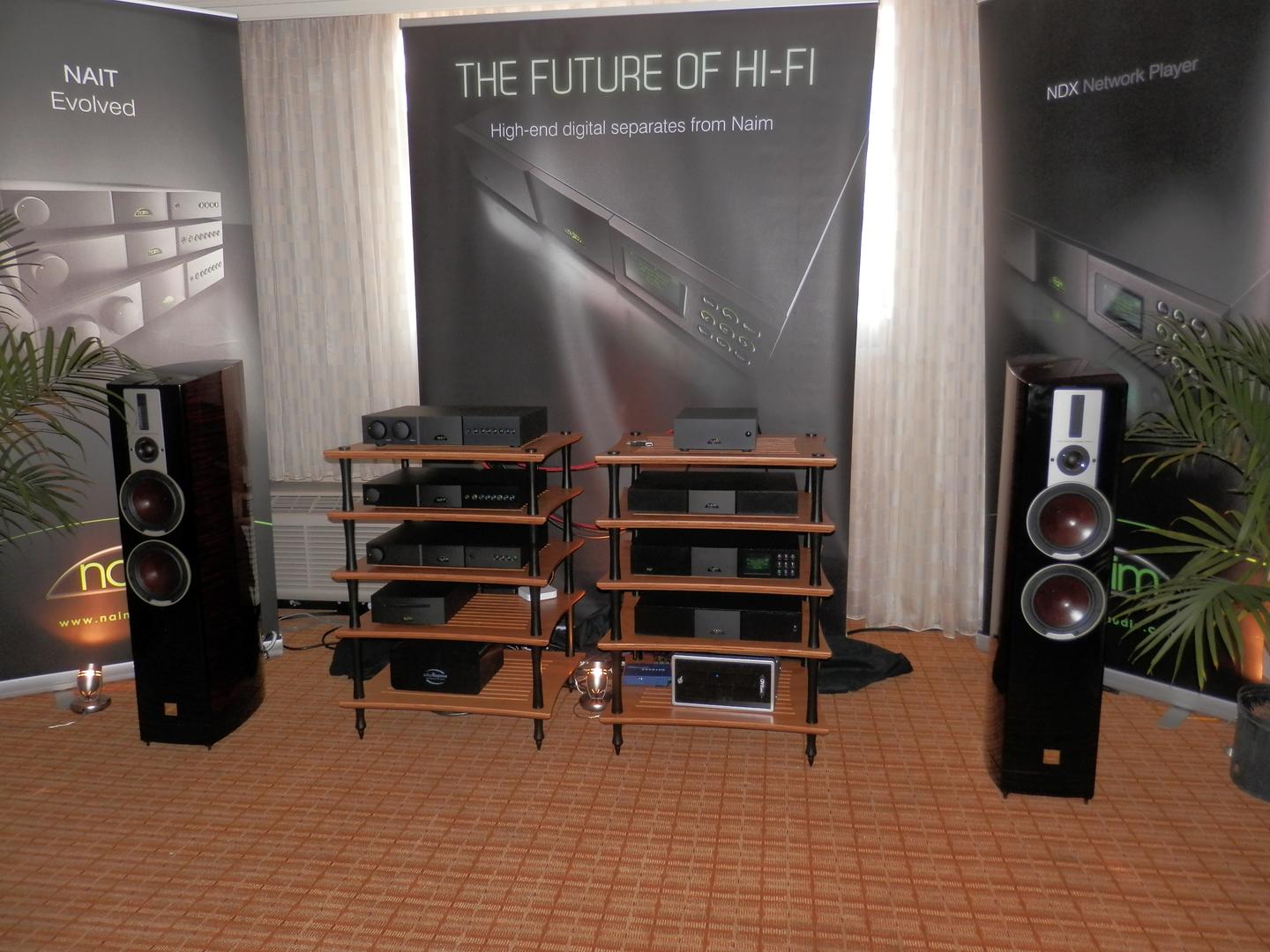 Though not as widely known as they perhaps deserve to be, Eficion’s F300 modular floorstanders consistently sound superb at show after show and they pair particularly well with Exemplar electronics, as shown here. 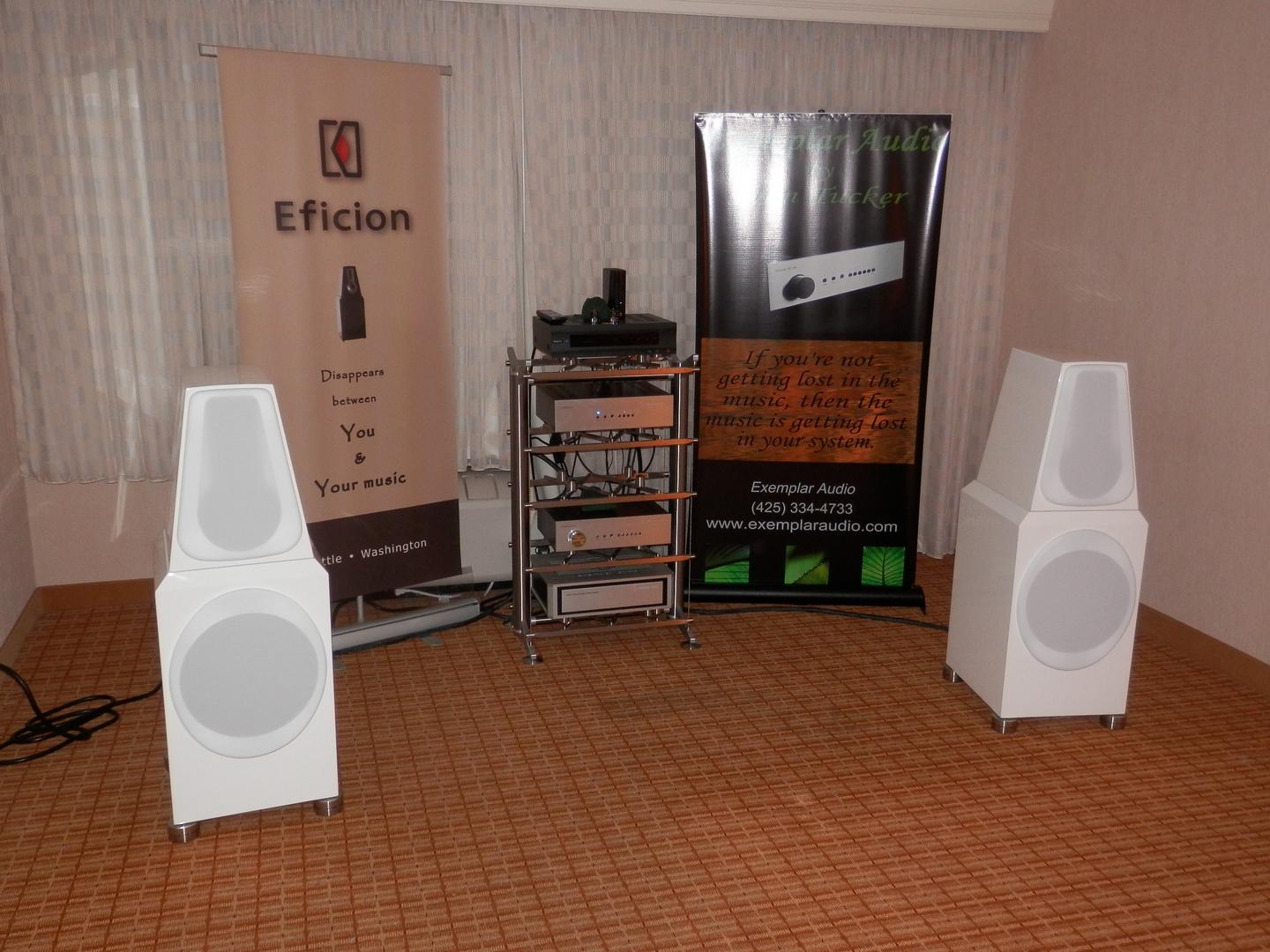 ENIGMAcoustic had two demo rooms, one of which featured the firm’s famous Sopranino electrostatic super-tweeter ($3,690) paired with a set of Magico V3s and the other featuring the firm’s first-ever full-range speaker called the Mythology M1 ($15,000/pr.).  The Mythology M1 played much, much bigger than it looks and sounded very promising indeed. 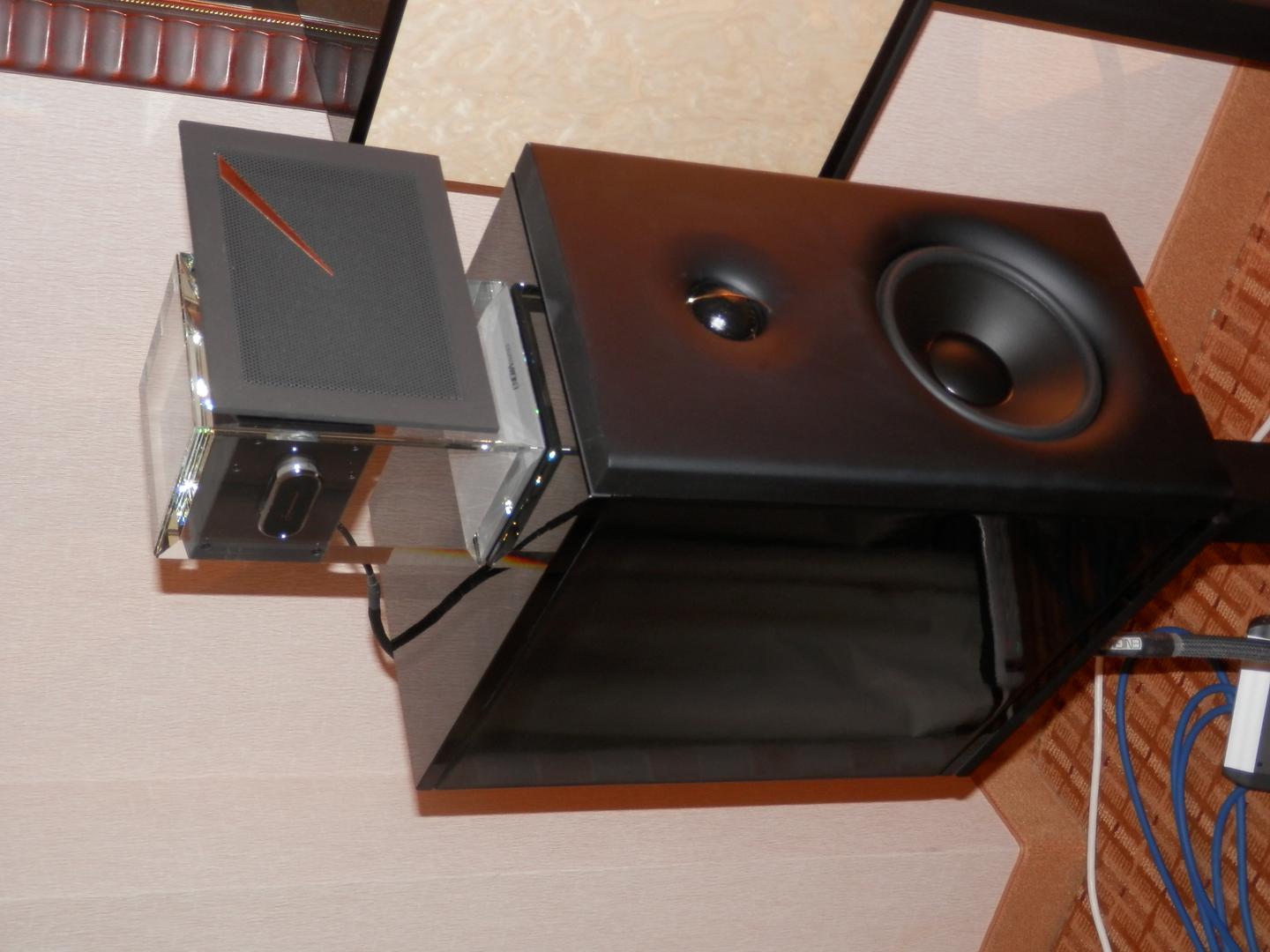 Emerald Physics speakers are controlled-directivity, dynamic-driver-equipped dipoles that come with DSP-driver electronic crossovers and typically are meant either to be bi-amplified or else used with powered subwoofers (depending on the Emerald model in question). 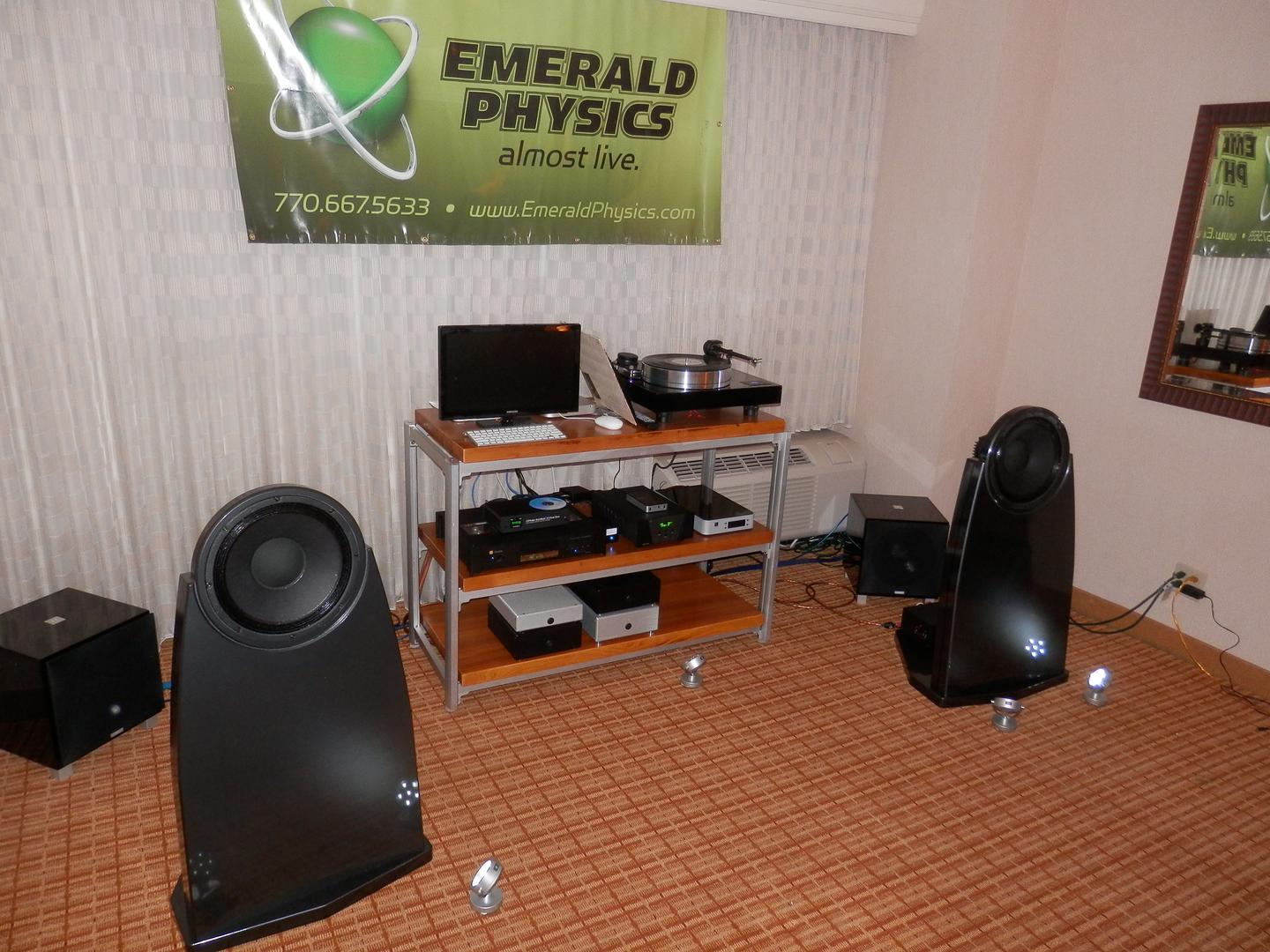 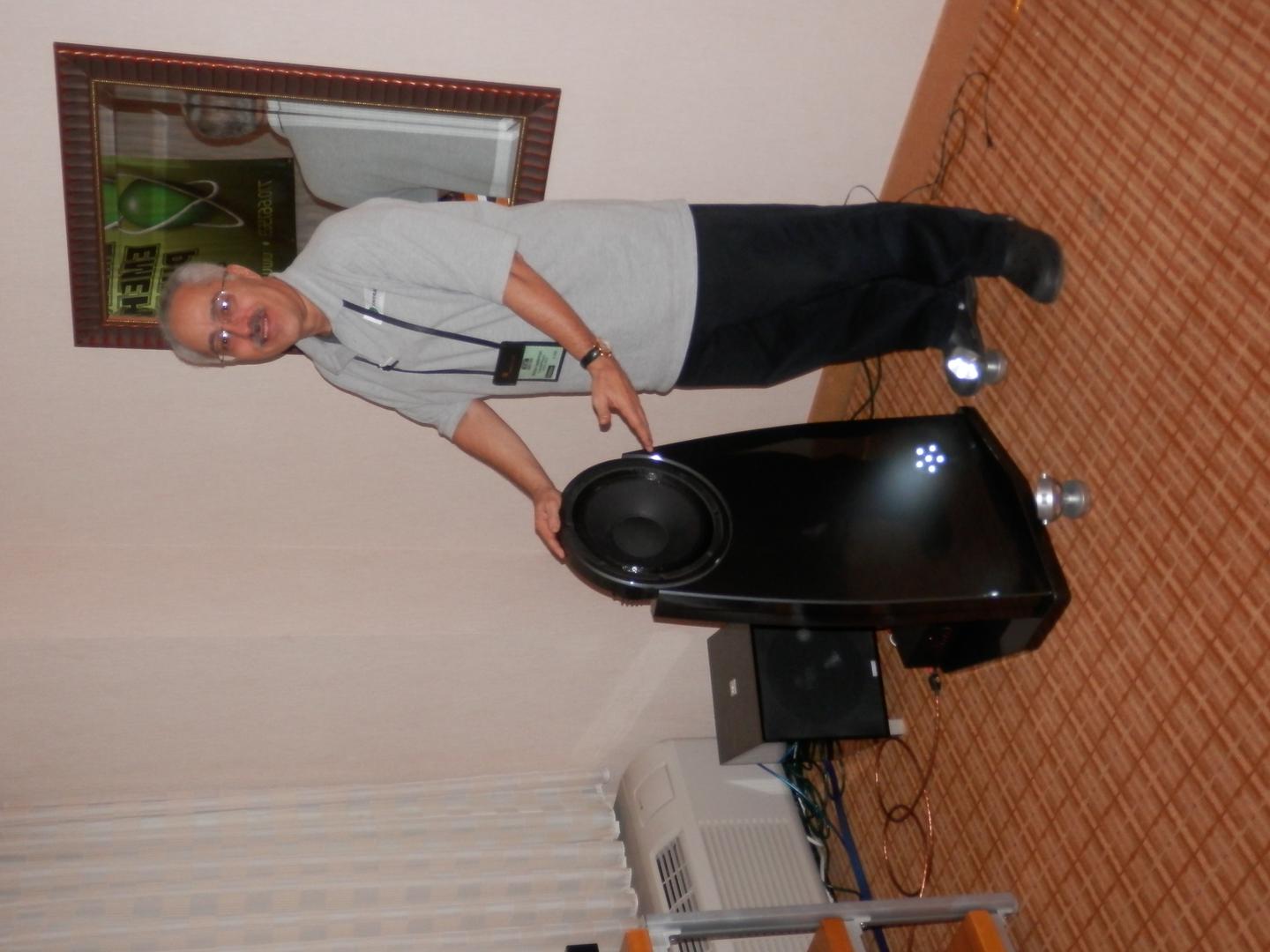 One example of Liedermann’s marketing innovations involves the fact that he often quotes two prices for any given Emerald Physics model: one price for buyers who are certain they want the speakers and another (higher) price for those who would prefer to buy with the right to return the speakers after a brief home trial period.

New from Focal for the show is a range of speakers that use the firm’s fascinating new Flax-based driver (and no, they haven’t gone on a high-fibre diet). Basically, Flax grasses are used, along with man-made glass-fibre materials, as the matrices within the composite materials used for the speakers’ midrange and mid-bass drivers. 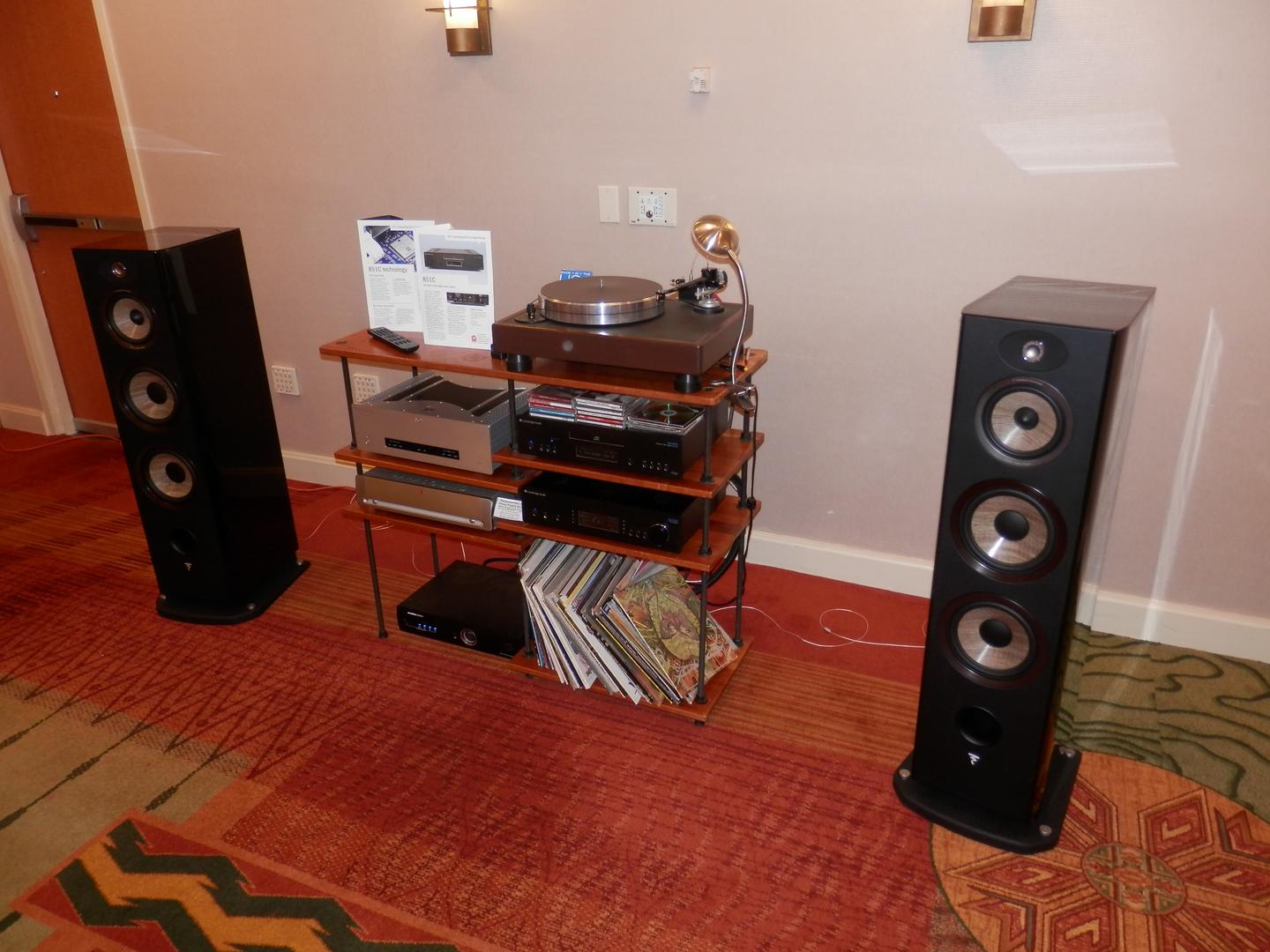 Focal’s US distributor, Daniel Jacques of Audio Plus Services, stands beside one of Focal’s new Flax-driver-equipped model and the Devialet 170 amplifier/DAC used to drive it (Jacque is also the US distributor for Devialet). 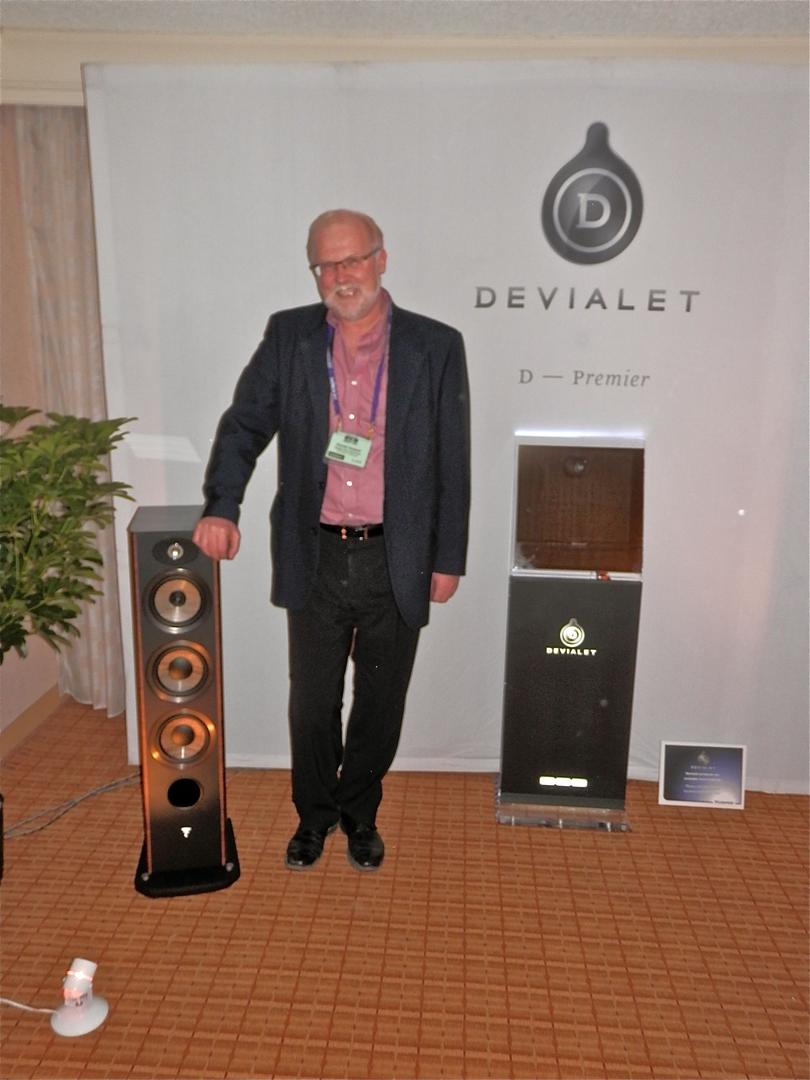 German Physiks showed a set of its Unlimited Mk II omnidirectional loudspeakers (as recently reviewed by Alan Sircom in Hi-Fi+), which were sounding lovely indeed. Listeners of a certain age will look at the German Physiks models and be reminded of the 1970’s vintage Ohm F loudspeakers with Walsh drivers, but the fact is that German Physiks has as this point taken the performance of the Walsh-type driver to far higher levels than inventor Lincoln Walsh might ever have imagined. 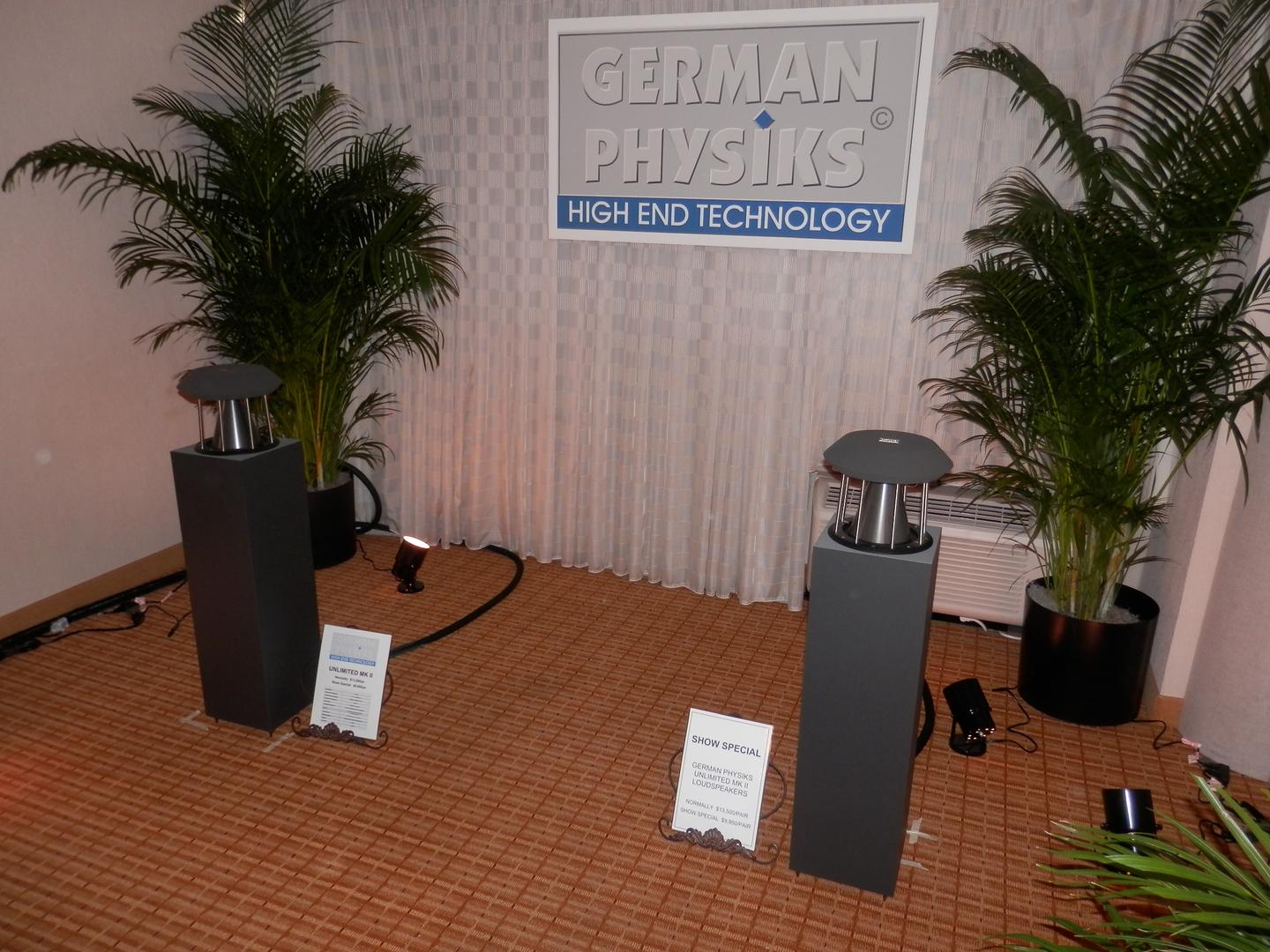 David Janszen shows off the JansZen zA2.1 hybrid electrostat, which—from now through the end of the year—can be purchased factory direct for $7,495, or from authorised dealers after the end of the year at a price of $8,750/pr. The zA2.1 features two electrostatic panels (of which Mr. Janszen in holding a sample in the photo shown here), a side-firing ring-radiator-type ambience driver, and two 7-inch mid-bass drivers. 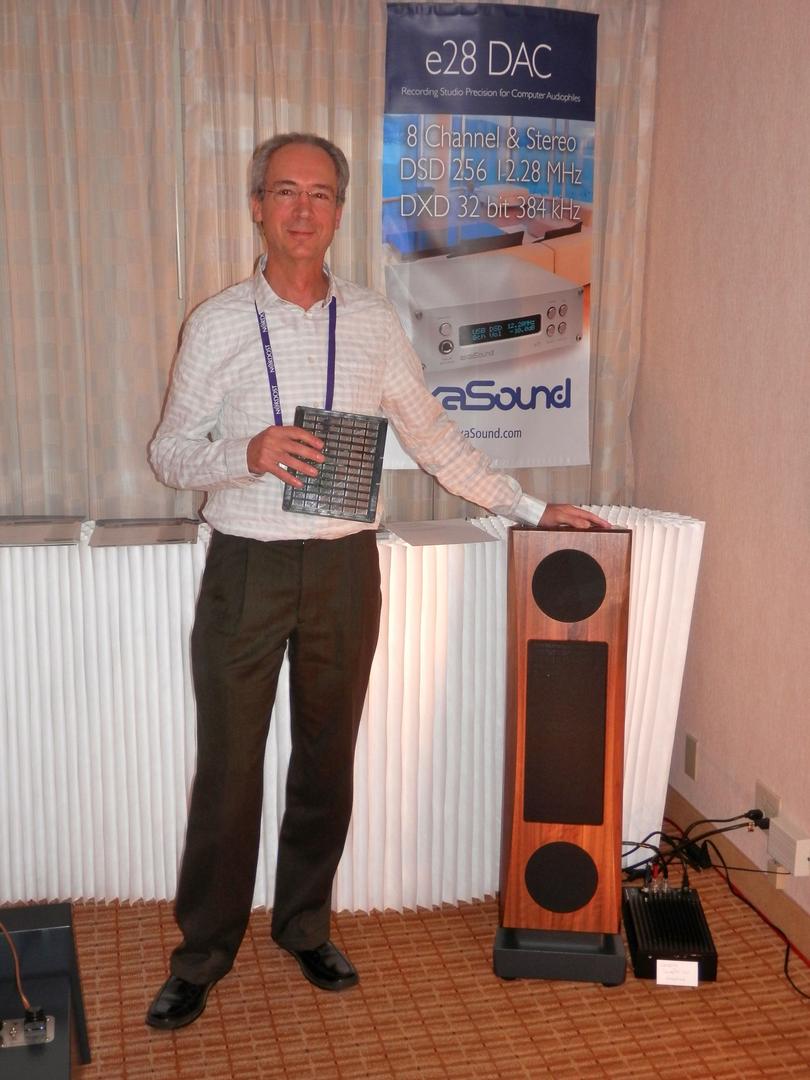 The German firm Lindemann (electronics, source components) teamed with the loudspeaker maker Manger (specifically, a manufacturer of active—and not merely “self-powered”—loudspeakers) to create a demo of uncommon sonic purity and great beauty.  In fact, we found a visit to the Lindemann/Manger room afforded a welcome respite from the sonic bombast and hoopla so often prevalent at hi-fi shows.  Because the Manger speakers have built-in amplifiers, electronic crossovers, etc., they really need nothing more than a preamp and source components(s), which functions are beautifully addressed by Lindemann’s very cool Music Book 25. 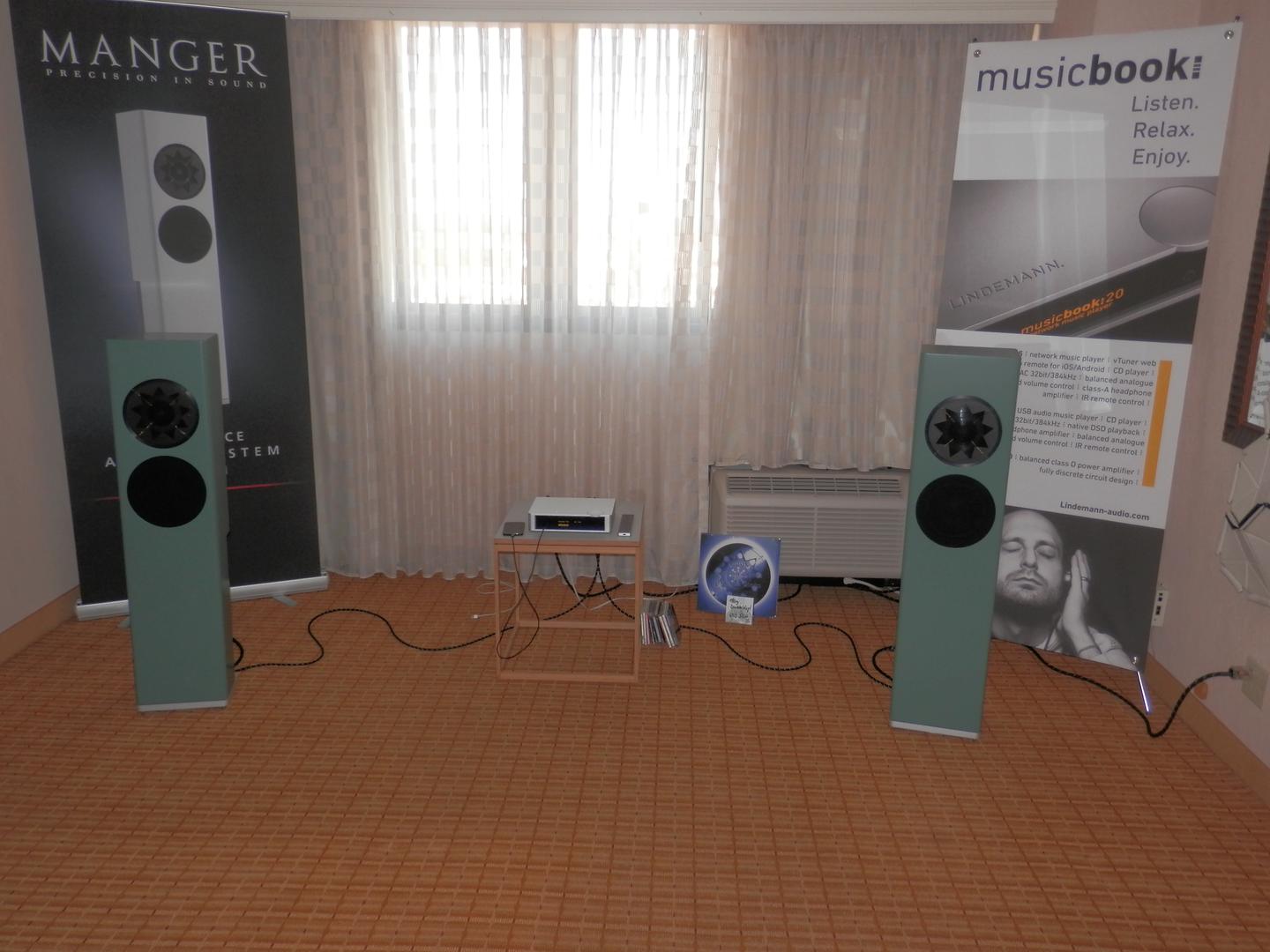 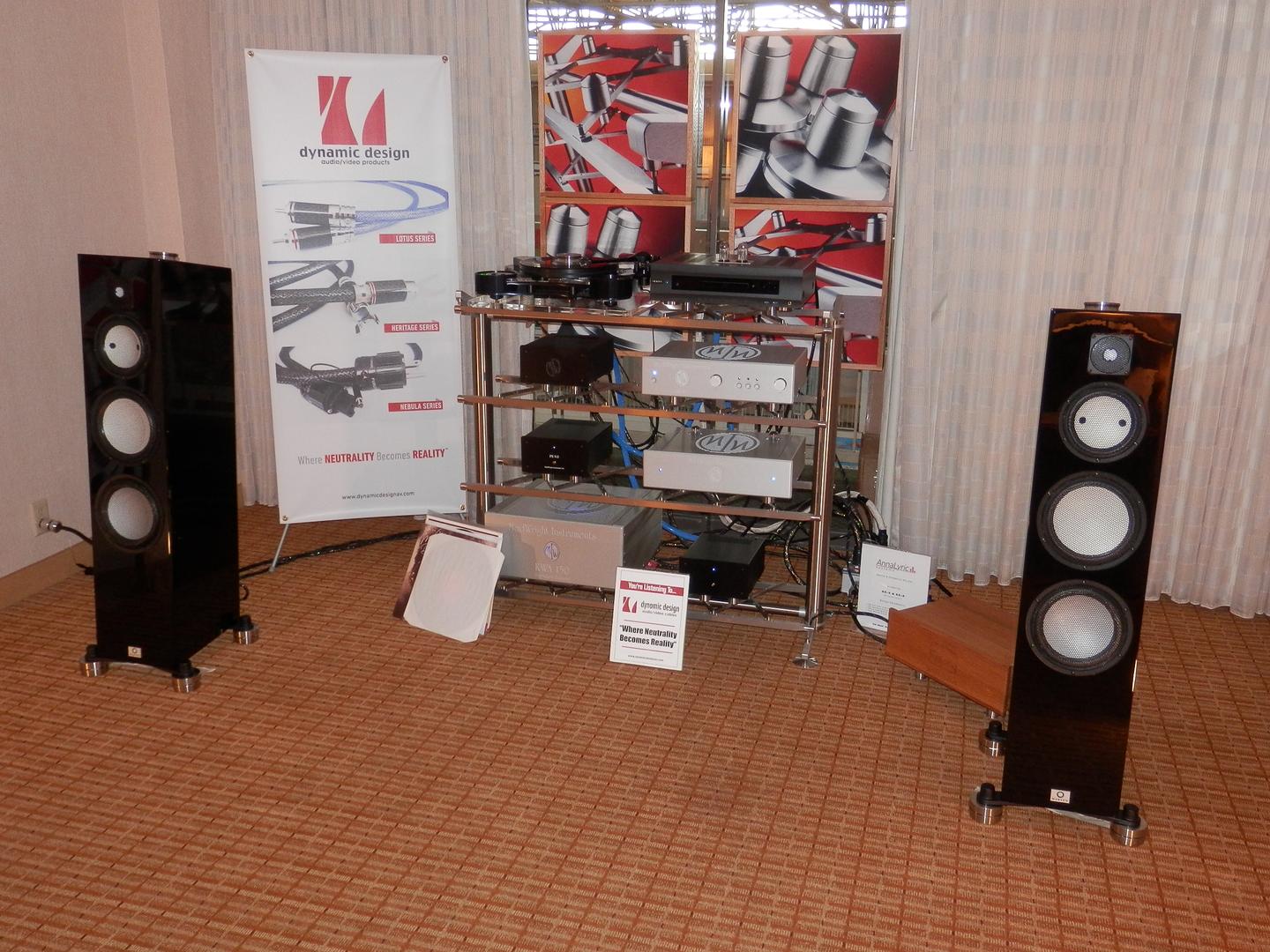 MBL North America, headed by Jeremy Bryan ably assisted by his wife Tara, put on a terrific demonstration featuring MBL 116 loudspeakers, Corona-series monoblock amps, the Corona preamp, and a wondrous United Home Audio reel-to-reel tape deck. Trust us on this one: you really haven’t lived until you’ve heard a dub of a master tape of Rush’s “Red Barchetta” played at or very near concert volume levels through the ever-capable MBL 116s. Wow! Can you say “dynamic headroom to burn?” Yes, indeed we can. 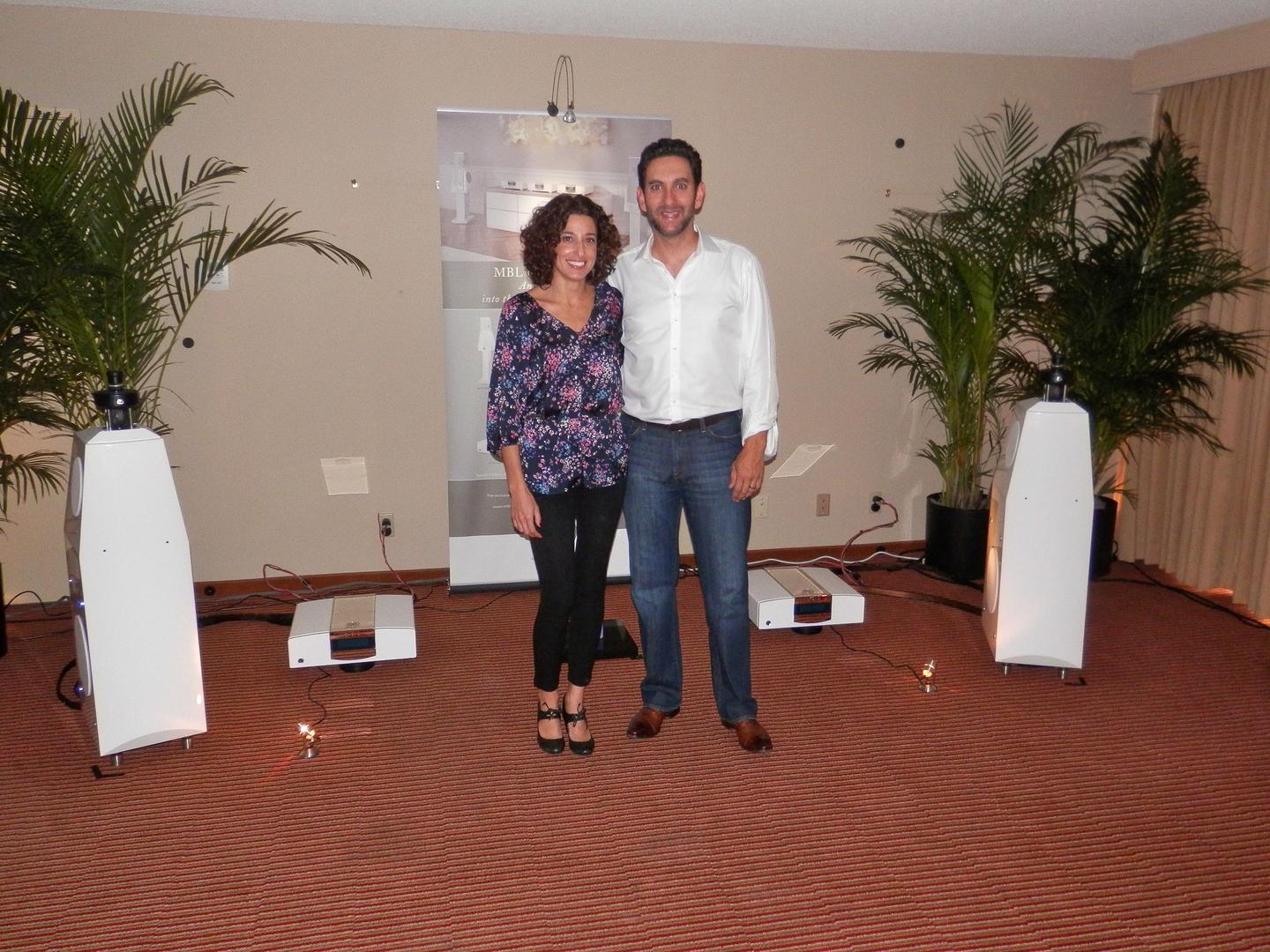 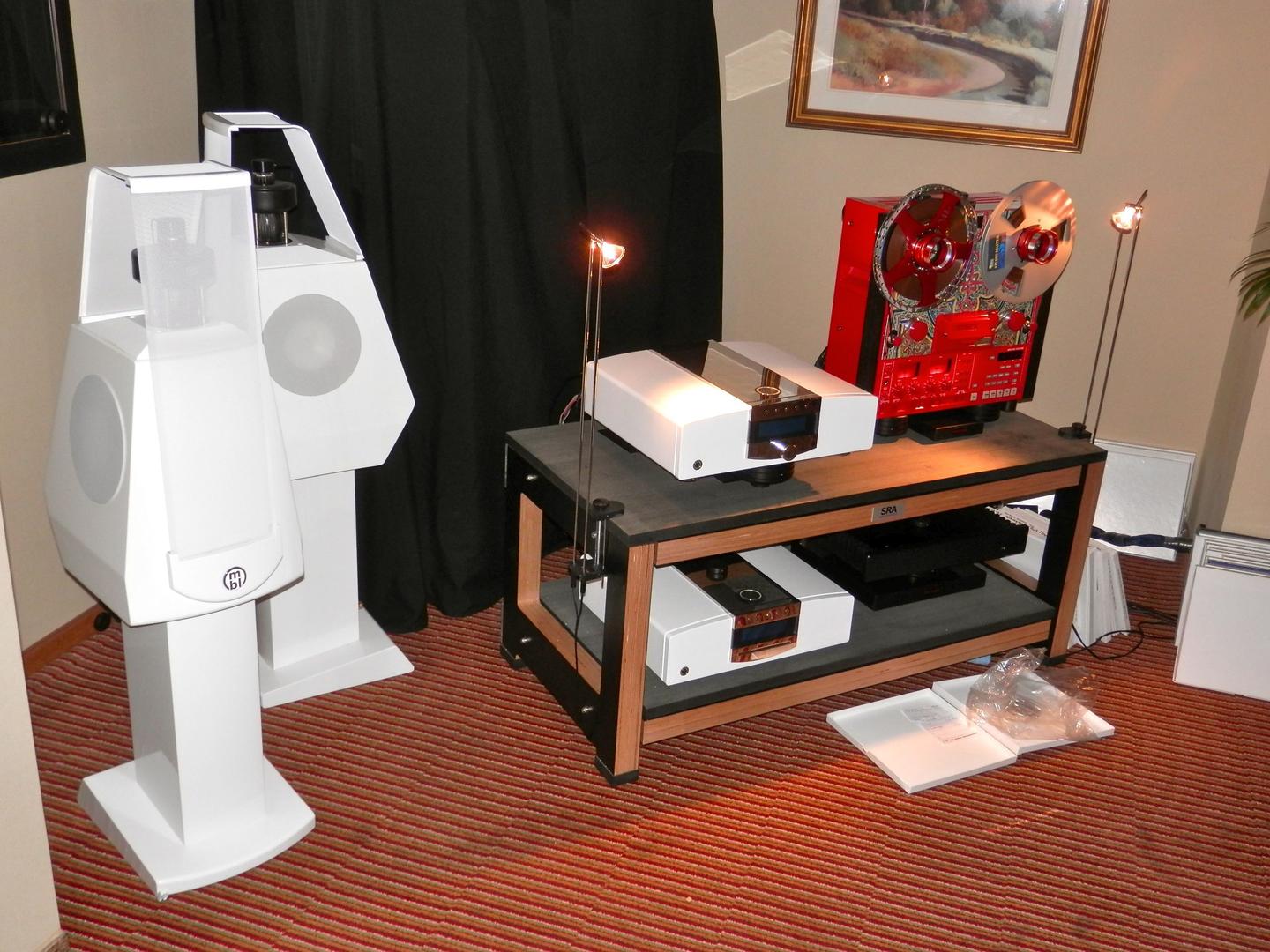 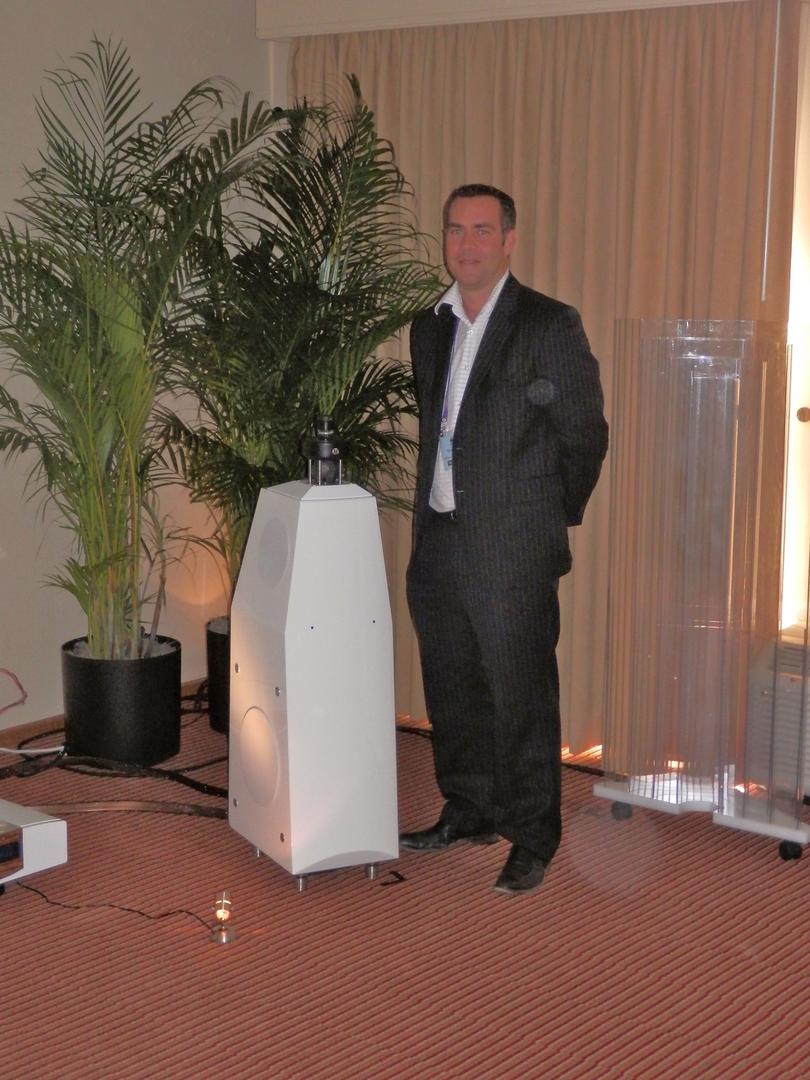 For RMAF Neat Acoustic ran two demo rooms, one highlighting the superb Ultimatum XL10 and the other showing the new-to-the-US Motive SX range.  Here we see US distributor Paul Manos stands besides a set of Motive SX 2s that undeniably (and quite literally) look “pretty in pink.” 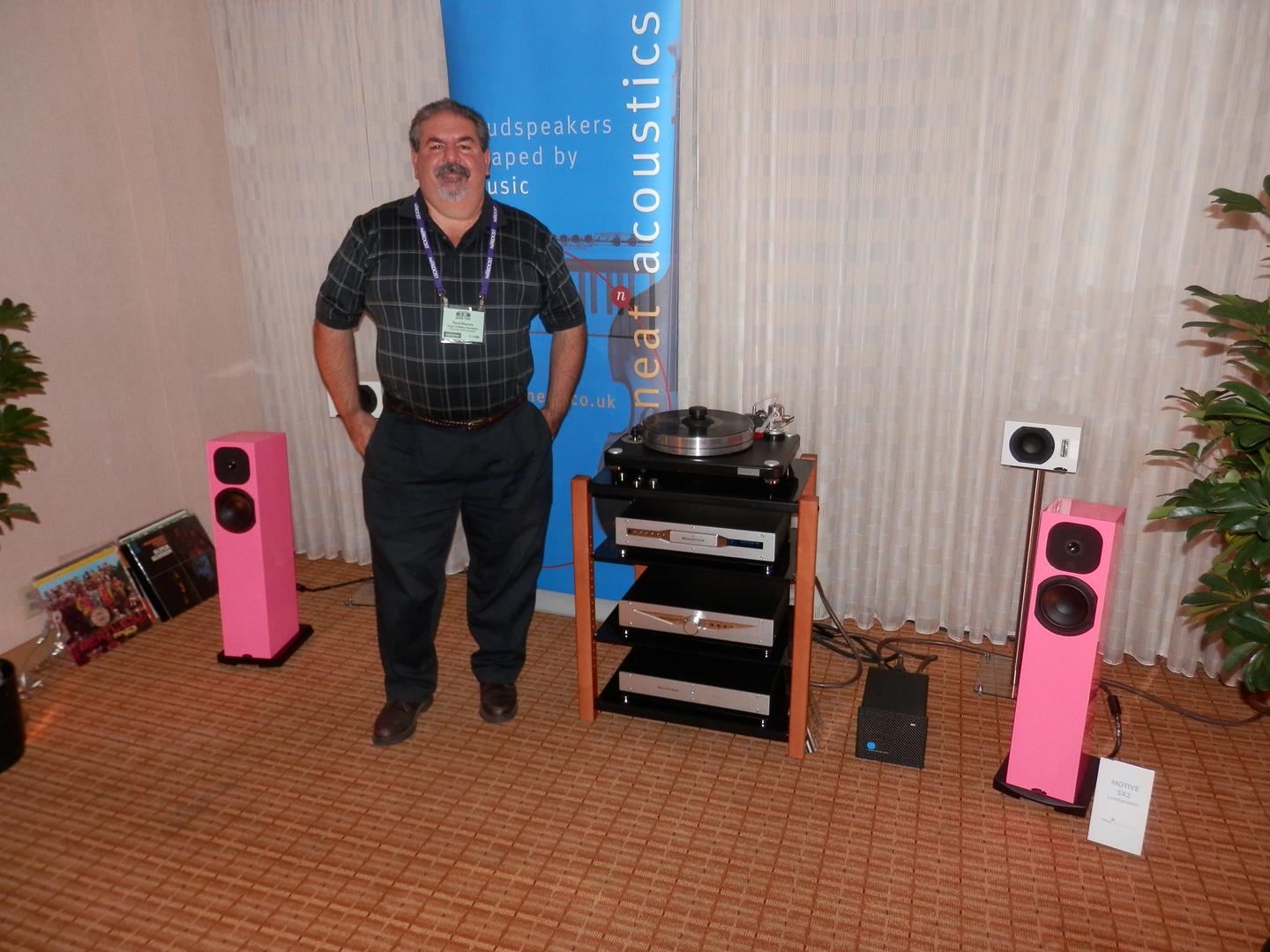 As the SX2s played, a pair of Motive SX 1 and SX3s at the side of the room awaited their turns in the demo system. 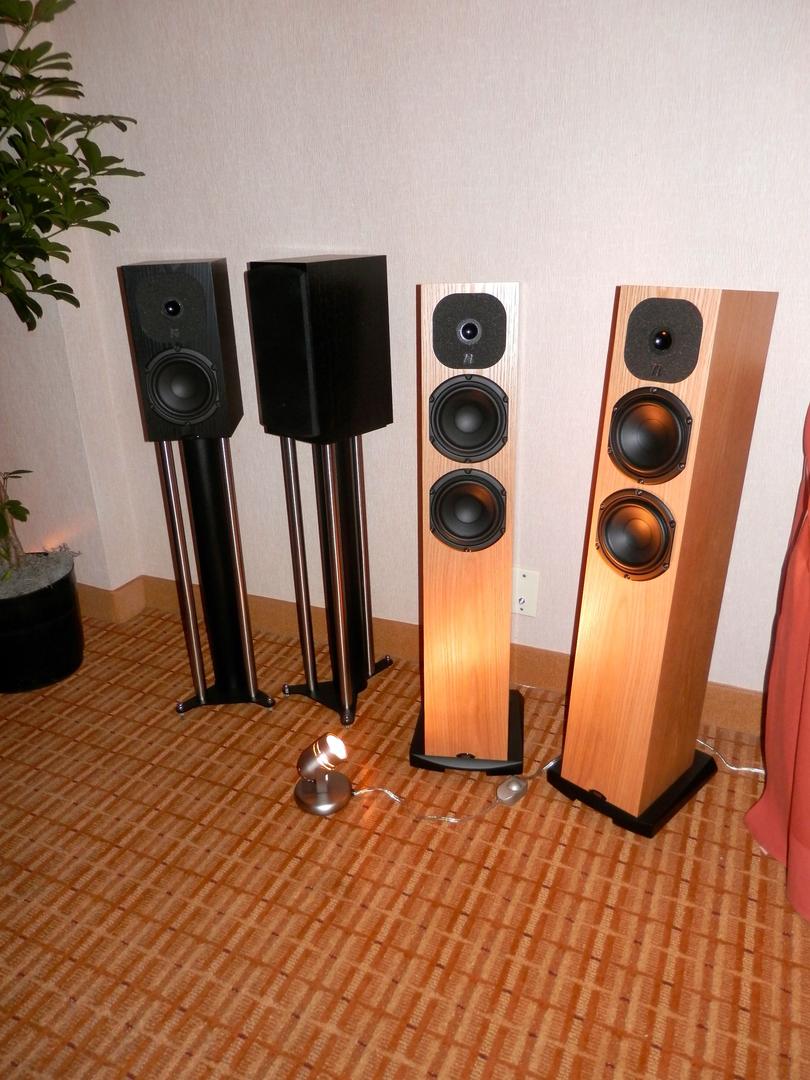 Launched earlier in the year, NOLA’s Metro Grand Reference Gold is designed to bring the performance of the Concert Grand and Grand Reference Gold speakers into a loudspeaker size that is suitable for smaller rooms. That said, the $33,000 loudspeakers were making a great sound through NOLA’s usual system choice of Audio Research electronics and Nordost Odin cables.

Vandersteen 7s have consistently sounded great at recent shows; this demonstration in the Audio Research Corporation/Vandersteen room was no exception. 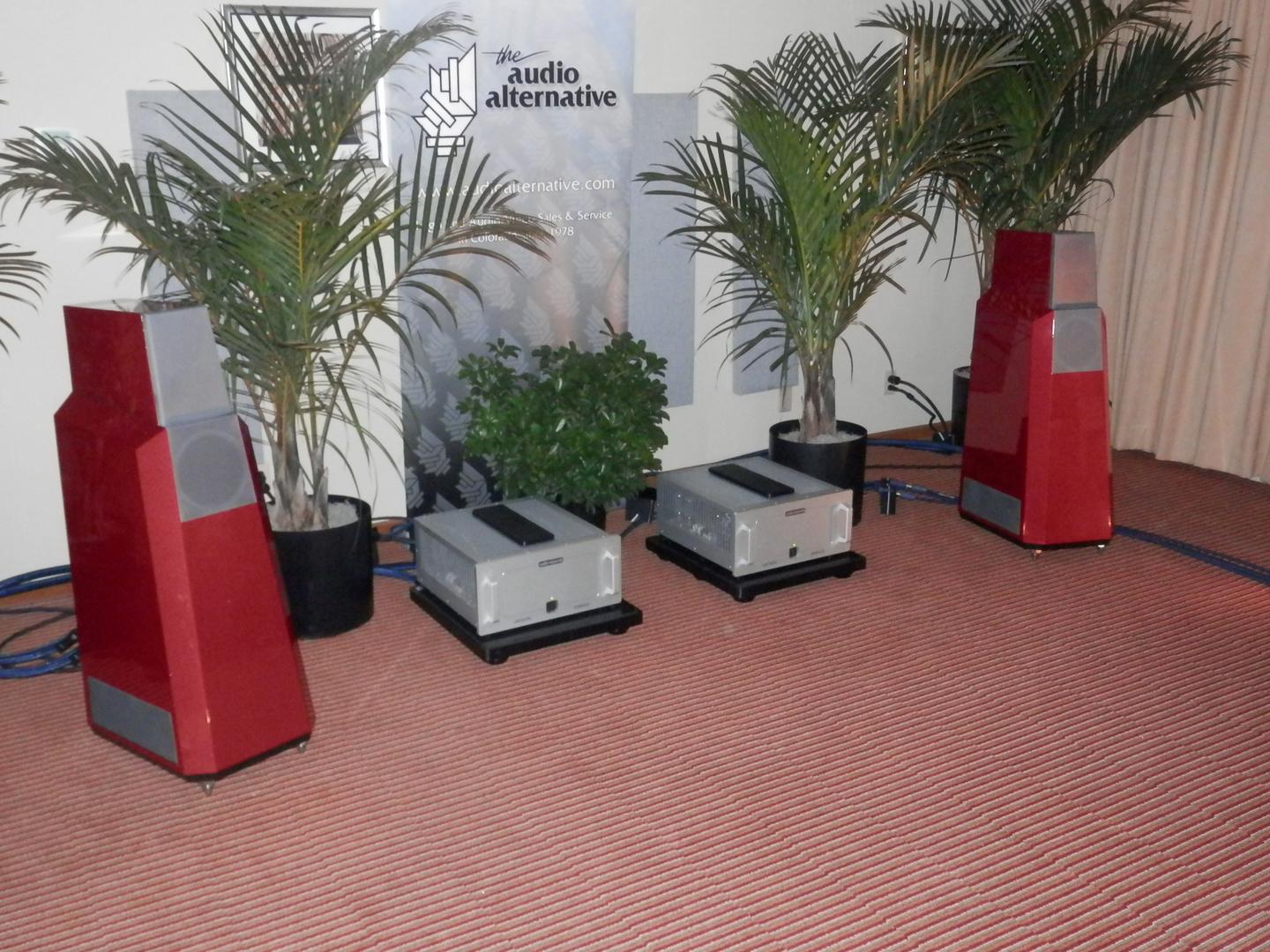 Von Gaylord loudspeakers have perhaps not found their way to the UK just yet, but that may change in the not too distant future. In the meantime, you can come to RMAF to hear the sweet-sounding 2-way Von Gaylord VG-8 stand-mount monitors. 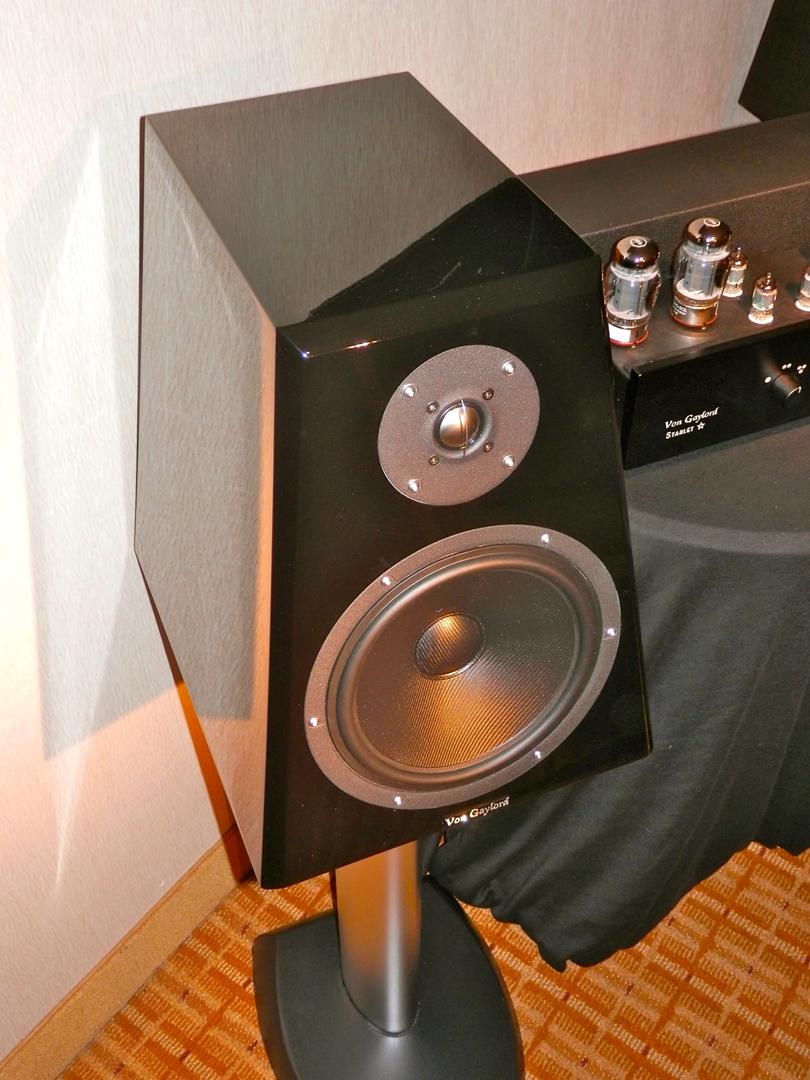 RMAF 2012 marked the debut of Wilson Audio’s Alexia loudspeaker, but in our estimation it has rarely sounded better than it did at this year’s shows when driven by Luke Manley’s spectacular new VTL S400-MkII fully balanced valve-type amplifier. For some, in fact, there was the keen sense of finally being able to hear the true potential of the Alexia design realized. 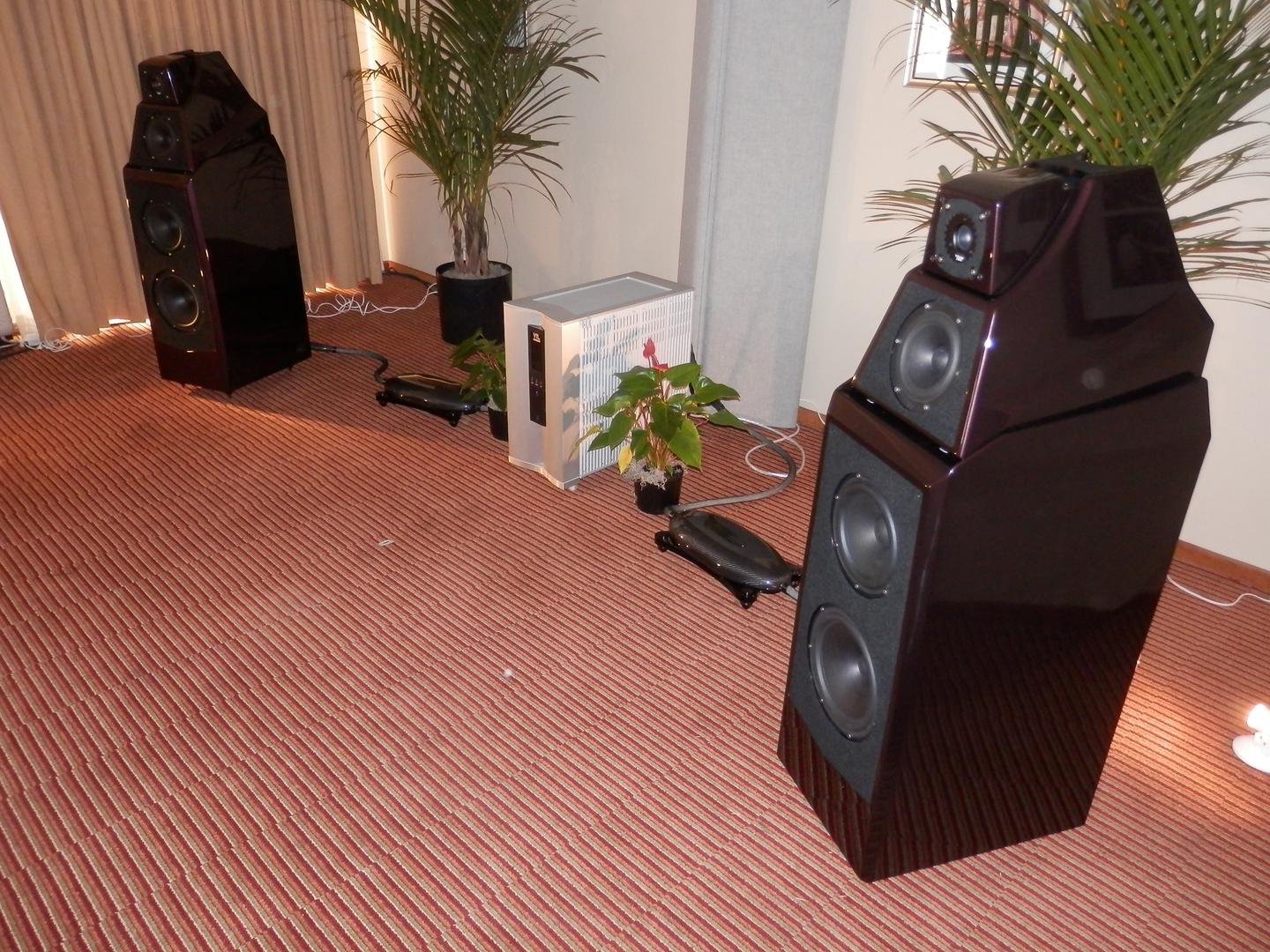 YG Acoustics joined forces with Mola-Mola electronics and Kubala-Sosna to create what many in attendance felt was one of the most compelling demonstration rooms at RMAF. The demo featured YG’s new two-piece, full-range Sonja 1.2 loudspeakers, which share a similar core platform with the firm’s even larger Sonja 1.3. The 1.2s, however, were all the speaker needed to fill the relatively large Marriott demo room in which they were placed and they synergized beautifully with the Mola-Mola electronics and Kubala-Sosna cables to produce a sound at once highly transparent and very sharply focused, yet full of natural warmth and dynamic life (a balance that is very difficult to achieve). 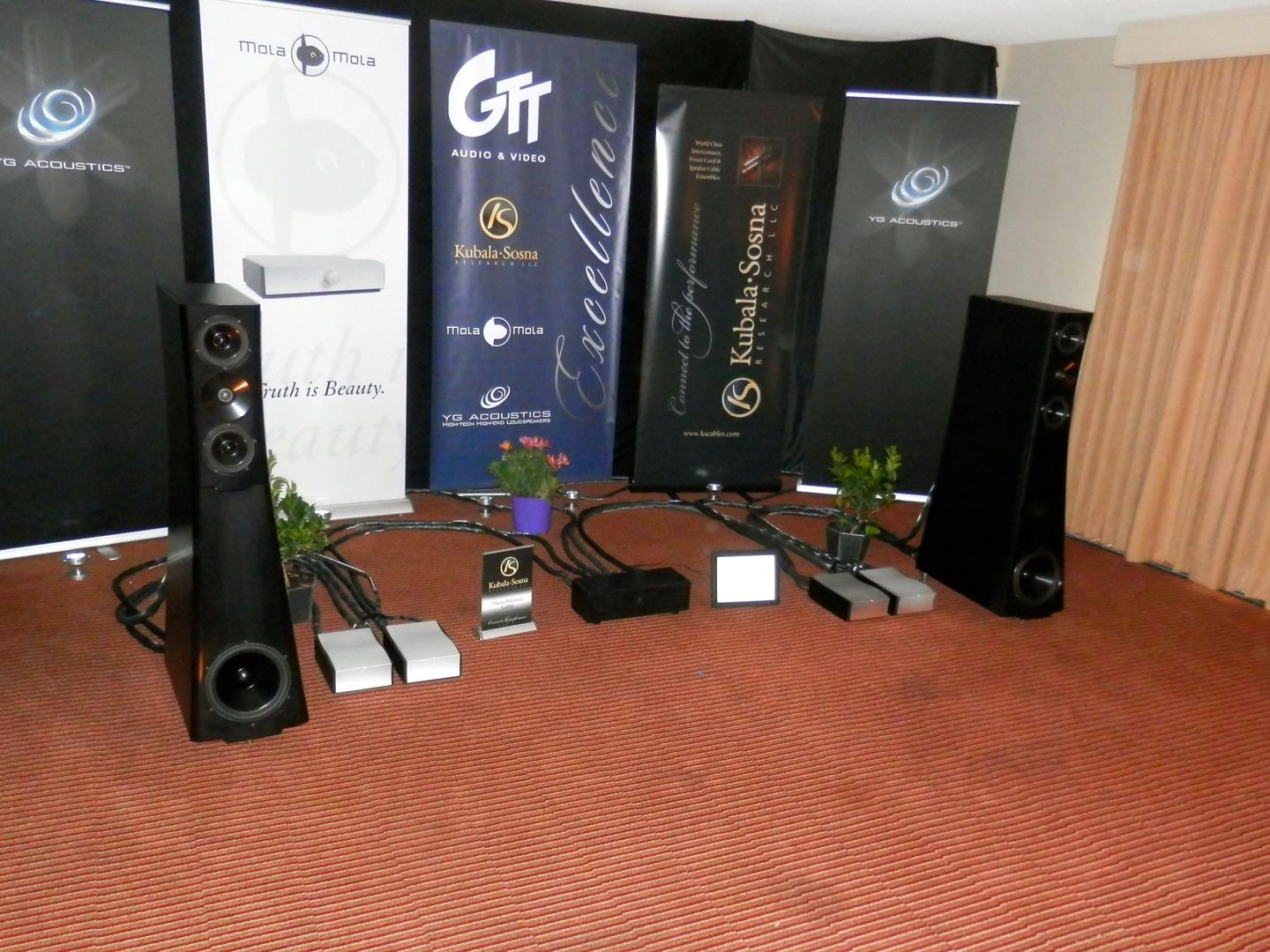