“Wow, this baby’s loaded,” I muttered to myself as I scanned the back panel of the Simaudio Moon i3.3 and its sister, the CD3.3, which was idling nearby. I do my own fair share of high-end tire-kicking, but the Canadian firm’s latest mid-priced integrated amplifier and CD player caught me off guard. Particularly the amp, with its four digital inputs plus an on-board DAC to service them. It turns out this DAC is only one of three options that Simaudio offers to prospective i3.3 buyers—packages that when fully installed transform a handsome 100Wpc integrated amplifier into a system hub for sources that might include a satellite TV, a computer, a turntable, and more. (For technical particulars see the accompanying sidebar.) However, there are two items that seem to be standard equipment on every Simaudio I’ve reviewed—rewarding sonics and surefire performance. The i3.3 and CD3.3 certainly follow suit here.

The i Has It 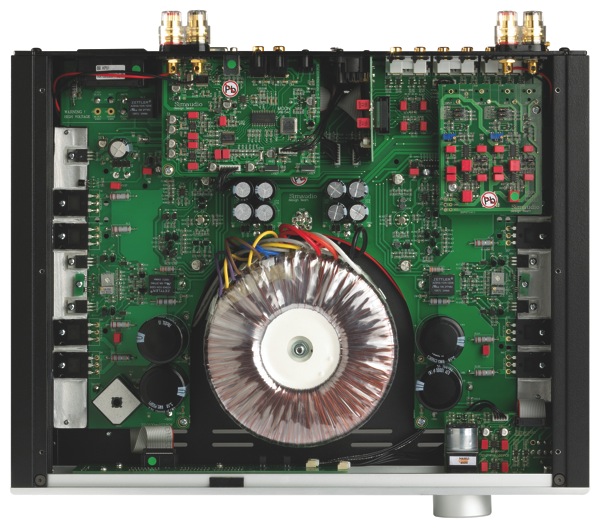 Simaudio and I have a history. Beginning with the Celeste PW-5000 integrated amp, and later the Moon Equinox CD player and Moon Evolution SuperNova, I’ve listened to and written in admiration about the consistent musicality and fidelity of Simaudio gear. Sonically the new i3.3 and CD3.3 remain faithful to Simaudio virtues. What’s even more interesting is that you can hear what is basically the same sonic signature in both the amp and the player, which is why, unless otherwise noted, my impressions are mostly an aggregate of listening to both.

Like a lit fuse the Moon 3.3 Series embodies a familiar sensation of eagerness relative to the reproduced signal. Call it Jonathan Valin’s jump factor, or a freedom from lag time, or a lack of leading-edge distortions, or all three, but the Moon 3.3 launches rhythmic volleys, percussive accents, and transient cues with the speed and smoothness of Usain Bolt bursting from the starting blocks. And it’s not adding a scalpel-edge analytical signature to produce this impression. It’s not grafting etch or grain onto leading-edge transients. Rather, it reproduces them as a continuous and organic part of the entire instrument or voice.

Whether driving a full-range loudspeaker like the new Sonus Faber Liuto (review to come) or my own ATC compacts the i3.3 had terrific bass control, good extension, and a smooth, refined top-end. Instruments seem to pop out of the blackness and silence of the soundstage with a purity and lack of noise that foster an almost addictive involvement in every performance. Although I’ve usually felt that Simaudio amps had the “speed thing” down, my experience suggested that the earlier amps tended to lean a bit toward the cooler side of the harmonic spectrum. I believe this has changed with the i3.3. On Clark Terry’s “Just For A Thrill” from One on One [Chesky], Geri Allen’s piano has all the drive and energy that I recall from the 3.3’s predecessors but also a warmer expression of tonality and dynamics, as if the player had found a greater range of tonal colors that revealed more of Allen’s inspired touch.

On orchestral works the Simaudio tandem are nothing less than spirited, high-output performers. Even at sometimes extreme levels during the Korngold Concerto for Violin and Orchestra [DG], the duo maintained an iron-fisted command and control that culminated in a final deep crescendo that seemed to settle in the hall’s foundations, gradually vaporizing into the earth below. Did the i3.3 have quite the terrifying impact of the 300Wpc Plinius Hiato integrated that I’ll be reviewing soon? Well, maybe not, but believe me, it was a horse race.

Sidebar: The Goodies and Extras

Options for the i3.3 fall into three categories—a digital package which includes inputs for USB-2, two for S/PDIF, a TosLink, plus a built-in DAC, in this case a Burr-Brown PCM 1793 24-bit/192kHz convertor. The Old School package is an internal RIAA phono preamplifier with circuitry and layout derived from the Simaudio LP3. It’s selectable for impedance. capacitance-loading, and gain adjustment for either moving magnet or moving coil. Finally, a set of balanced line-level jacks is offered as an option on both the i3.3 and CD3.3. Available singly or in any combination, these options can be acquired either at the time of purchase or as future upgrades.

However you fill out the order form—fully loaded or box stock—the Moon i3.3 and CD3.3 player are beefier versions of the Moon 1 series that Wayne Garcia reviewed last year. Gone are the softer rolled chassis and cylindrical side panels of the past—replaced by the more masculine square shoulders of the current Moon Series. For the i3.3 the key visual differences are the deeper heat sinking along its flanks and the large display on the front panel. Under the hood, the i3.3 does business with a 100Wpc into 8 ohms, a figure that doubles to 200Wpc into 4 ohms—a robustness contributed by the four bipolar output devices in each channel of the amp section and the oversized power supply featuring a custom toroidal transformer of Simaudio design. There are five line-level inputs including a front-mounted 1/8″ mini-jack for personal media players. There is also a 1/4″ headphone jack.

The Moon CD3.3 uses a proprietary CD drive system with in-house developed hardware and software. Its drive system is mounted on Simaudio’s M-Quattro gel-based 4-point floating suspension for vibration damping. In fact, Simaudio has always paid significant attention to resonance control, and both units utilize rigid chassis construction that minimizes the effects of external vibrations. The CD3.3 includes a digital input for use with a PC, music server, or standalone transport, a digital output, and optional balanced analog outputs (also available for the i3.3). Other specs include internal upsampling with 24-bit/1.411MHz processing, a Burr-Brown PCM1798 ultra-high-resolution 24-bit/192kHz DAC (used in Simaudio’s premium Moon Evolution SuperNova player), an 8x oversampling digital filter, and a precise 25ppm digital clocking system.

For both components, Simaudio’s customary attention to detail, fit, and finish abounds. For example, the PCBs feature copper tracings and gold plating, which yields low impedance characteristics. Buttons and dials and rear-panel connectors have a quality feel. Only the generic plastic remote control puts a momentary damper on the fun. However, adding to the units’ already superior connectivity, both the amp and CD player have a SimLink controller port, which allows for two-way communications between them and other compatible Moon components. For example, I could hit play on the CD player and the integrated would instantly switch inputs to CD. Nice touch. –NG

For those with analog playback systems the optional phonostage proved itself a very capable unit. On Ricki Lee Jones’ scrumptious cover of “The Second Time Around” from Pop Pop [Geffen], the Simaudio duo exhibited a full and slightly forward midrange. Its extension, though solid, softens slightly at the frequency extremes so that the cumulative sonic picture has just a slight midband emphasis. Although not up to the ultra-quiet, lush, layered standards of my reference JR Transrotor, it’s a surefire mid-level option that will please most vinyl fans. Uncompromising analog die-hards, on the other hand, should keep the Simaudio LP5.3 in mind—a 2009 Editor’s Choice Award and 2008 Product of the Year winner.

Sonically the i3.3 doesn’t make a conspicuously wrong move, and where it misses the mark it does so without undermining the essence of the music. At times I could perceive a slight foreshortening of soundstage depth—a minor quibble—which created an audience perspective a row or two back from the “seat” I’m accustomed to. The amp’s a little casual in delineating complex groupings of images and a little lightweight on certain demanding high-output deep bass cues, or when an orchestra throws its full energy behind a finale. However the i3.3 never loses its composure. Rather, when pushed really hard on a track like Steve Winwood’s “The Finer Things” from Back In The High Life [Island], it slightly softens the aggressive energy of the snare and crash cymbal and loses a bit of subterranean punch and timbral information on the massive downbeats. Or on an acoustic track like Tierney Sutton’s “Alone Together” from Something Cool [Telarc], the string pop from the stand-up bass loses a certain resonant sustain while the harmonic details tighten up ever so slightly, like the winding up of a mainspring.

As rock solid as the i3.3 is, it’s even harder to imagine wanting much more in a Red Book CD player than the CD3.3. It’s that good. While the i3.3 and the CD3.3 share a house sound, there is even more potential to be mined from the CD3.3 in the company of a no-holds-barred amp. (Simaudio offers a broad lineup of high-powered models.) In such company, it can dig a little deeper, reach a little higher, and sound more open in ultimate extension. “The Finer Things” regains much of its stomach-churning punch on the drummer’s downbeat. And during the Korngold the sound of the CD3.3 loosens up just a hair and finds inner dynamics hitherto hidden—like the gathering strength of the harp beneath the orchestra as the concerto nears its end. Anna-Sophia Mutter’s violin is all the more effortless as it glides and soars above the orchestra. Sure, at twice the money, players like the Esoteric X-05 and Simaudio’s own Moon SuperNova slip past the CD3.3 with a bit more top-end air and transparency, but it doesn’t take a genius to figure out where the bargain is amongst this trio.

By way of another comparison I listened to the same material through the onboard DAC of the i3.3 via the CD3.3 transport and S/PDIF, as well via a USB input from my Mac. It’s close, but the CD3.3 with the higher-spec Burr-Brown DAC is the hands-down winner. On a track like Jen Chapin’s “Renewable” from ReVisions [Chesky] the sound via the i3.3 DAC is a little glassier and loses some of the organic warmth and dimensionality of the standalone CD3.3. The space and the air flowing over the reed of the baritone sax is not quite as silken, its texture a bit coarser. USB was a similar story—highly listenable but spatially there was just a bit less elbowroom.

When a company is on a roll as Simaudio has been, it might seem that nothing can slow it down. Like the line goes, nothing succeeds like success. But that’s not entirely true—complacency kills. And failure to read the market is equally deadly. So kudos to the smart cookies at Simaudio for listening at every level. For listening to the iTunes junkie, listening to the server-surfer, or just the pure-analog Old Guard like me. The Moon i3.3 and CD3.3 have what it takes to make audiophiles of us all.