You can find a report on my first hands-on encounter with Shunyata Research cable and power products in Issue 239. Back then I was reviewing the company’s most basic setup—a starter kit for first-time upgraders—the Venom PS8 power distributor, Venom Defender chassis-free plug-and-play power conditioner, and Venom HC power cords. For under $1300 its performance and resolution surprised no one more than me. Truth be told, I’ve had a conflicted past relative to this segment of the market—its claims and costs. It’s fair to say that I considered myself reluctant, but persuadable. However, Shunyata’s Venom system refined my system’s overall voice to an extent I couldn’t have predicted. As I concluded then: “In as little time as it takes to plug in a couple power cords, I’ve gone from skeptic to believer.”

Venom NR uses the same AC connectors, fluorocarbon dielectrics, and VTX hollow-core conductors (to minimize skin effects and eddy currents) found in its higher-priced stuff. The Venoms also use OFE Alloy-101—the highest grade of copper with a minimum 99.99% purity—and the Kinetic Phase Inversion Process or KPIP (Shunyata’s own processing technique that eliminates the need for burn-in and cryogenic treatment). Venom is available in three gauges: NR-V12, 12-gauge conductors designed for all components; NR-V10, which uses larger 10-gauge conductors better suited for amps, preamps, DAC’s, and phonostages; and Venom 14 Digital (14-gauge) for use with digital-output devices, clocks, and servers. 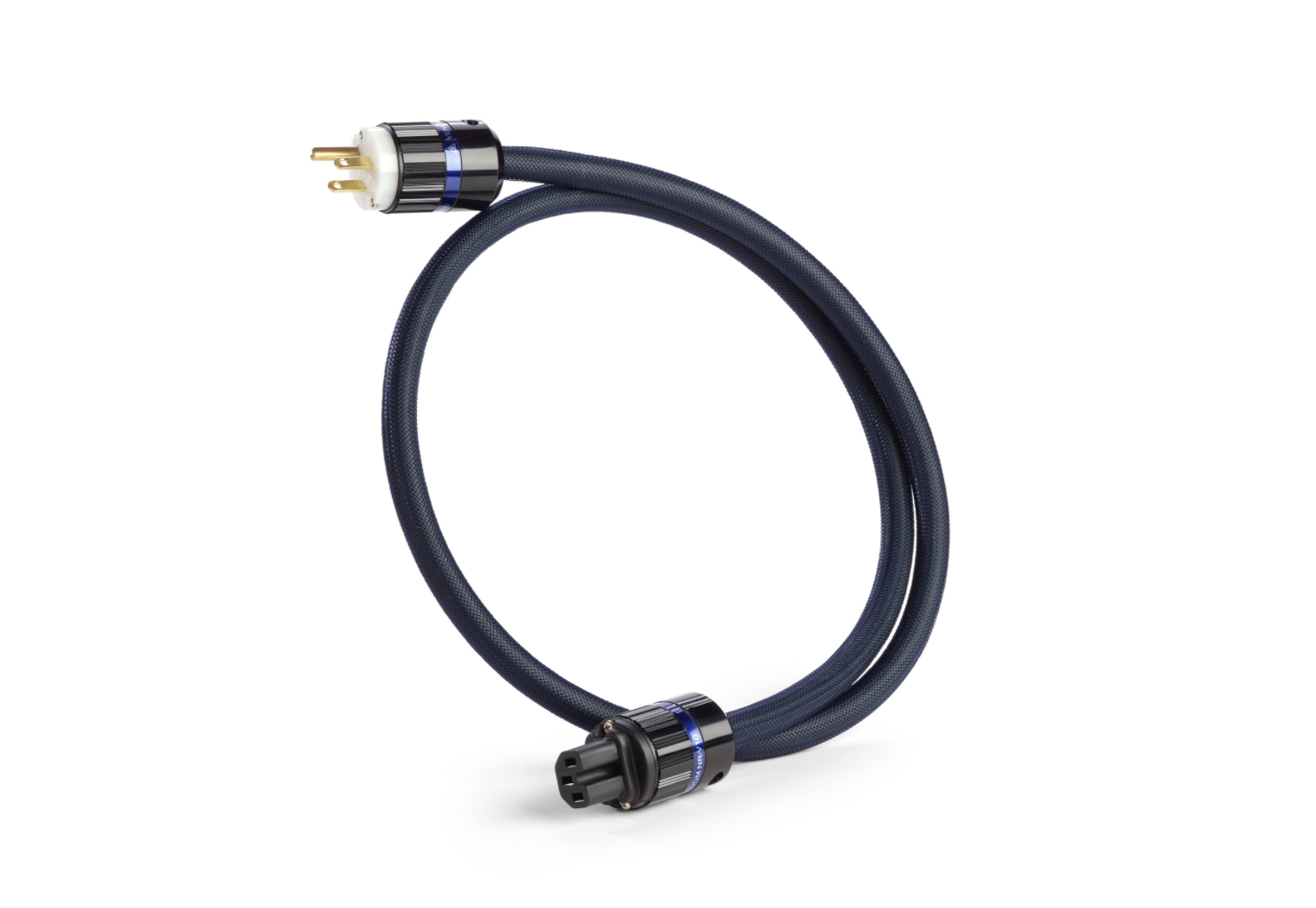 An interesting side note is that V14 Digital is a spin-off from Shunyata’s medical division, Clear Image Scientific (clearimagescientifc.com), which manufactures similar power cords and power-distribution boxes for electrophysiology, heart surgery, neuroscience, and medical-imaging applications. These cables are designed to eliminate the parasitic noise generated by computer devices and network peripherals. The CIS website includes some case studies and third-party measurements. (Note to self: If I ever get another MRI, ask the technician if the lab goes with Shunyata)

Contemporaneous with the development of Venom NR, was the debut of the Hydra Delta D6 power distributor. Housed in a full-sized chassis, it’s rated at 20 amps of continuous current. It’s been designed to deliver power to more demanding systems, including those with high-powered amplifiers. While typical conditioners use fuses or thermal breakers, Delta D6 employs superior electromagnetic breakers, plus massive buss and 8-gauge ArNi conductors (also treated with KPIP for a period of eight days), and Hubbell outlets that use a triple-wipe contact system equipped with broad contact areas to grip a plug from three different sides.

Shunyata takes isolation very seriously. All chassis panels and internal structures are treated with vibration-dampening materials, and many electrical components are treated in Shunyata Research’s own advanced computer-controlled cryogenics lab. The outlets are isolated from the chassis with gaskets that reduce vibration conducted through the AC cables. All internal modules, filters, and electronics are encapsulated in a vibration-absorbent compound. Hydra Delta D6 also uses Shunyata Research’s Cable Cradle solution to mitigate against heavier power cables pulling away from outlets. Shunyata Research’s vibration-dampening footers come standard; these footers may be optionally upgraded to SSF-38 stainless-steel.

I evaluated the D6 and Venom cords across two different systems in separate listening rooms. The smaller room has eight-foot ceilings and houses a compact system based around the two-way ATC SCM20SL loudspeakers, augmented by a pair of REL T5i subwoofers. The estimable Aesthetix Mimas integrated supplies the power. Sources are the Lumin S1 Media Player and dCS Puccini SACD player. For cables I alternated among Wireworld Silver Eclipse 8, Audience Au24SX, and MIT Evo One. The second system is in a medium-sized space with ten foot ceilings. The loudspeakers are active three-way ATC SCM50SL towers driven by a Pass Labs XP-12 preamp. Cables are XLR versions of the aforementioned brands. The source is the dCS Bartók streaming DAC. With six outlets at the ready, Hydra Delta D6 is an ideal size for smaller systems that comprise a CD player and media player/DAC, a phono preamp, and perhaps an integrated amp. Although I spent most of my time listening to Delta D6/Venom NR as a system, each is sold individually, so you can add components as your budget permits. Indeed just adding NR power cords provided a clear improvement over Venom HC cords, but the results were not nearly as transformational as running the products as a complete system.

My listening impressions of the Venom NR/Delta D6 combination essentially picked up where my previous encounter with Shunyata power conditioning products left off. Since I still had the Venom PS8/Defender and HC cords on hand for comparison, there was no doubt left in my mind about the extent to which the Shunyata team has improved the breed. Those improvements included a more expansive sense of dimension and acoustic space, as well as greater amounts of transient and low-level detail. The tonal palette was also refined—I heard a wider contrast of instrumental timbre and increased micro-dynamic resolution. The impression of extended reverberation times, of longer sustains and decays, was also quite apparent. The overall effect was akin to the way your eyes seem to perceive a more vivid array of colors and contrasts on the sunny day following a cleansing rainstorm. I observed, for example, during Dave Brubeck’s Take Five the sheer naturalism of Desmond’s saxophone—a near-ideal balance of reedy attack and trailing harmonic sweetness. Peter Gabriel’s and Kate Bush’s vocals during “Don’t Give Up” from the Tidal MQA stream sounded less constrained, and there was more air between the duo. Massed voices, whether in a large chorus or in groupings of backup singers, were also enhanced in specificity and individuality.

Among the most noteworthy sonic achievement was the expansion of spatiality and the ease of presentation. I’m referring to spatiality in both the micro and macro senses. In the macro, the orchestral stage seemed to expand into a fully continuous, seamless fabric of sound. Images were better localized revealing more of the personal ambient space around the players themselves.

At the micro level, images were pocketed within halos of ambience that were stitched into the soundspace, These micro cues led to a more finely focused presentation that reinforced the almost eerie lack of noise and distortion that the Shunyata bundle was bringing to my system. The creaky piano stool and “shh” during the famous 45-second piano chord decay at the end of the Beatles’ “A Day in the Life” is one of my favorite bits of low-level minutiae. Another occurs near the close of Kissin’s performance of Glinka’s “The Lark,” when a stage door slams along the back wall of the auditorium. Although it’s low in volume, the way that door slam ambushes the ear makes me jump every time I hear it. With the Shunyata in the system, it was all the more surprising, thanks to the way the lower noise floor clarified “found-sound” gaffes.

If I were to summarize the strongest apparent “effect” of Shunyata’s Venom/Delta D6 package it would be the way it lifted the music out and away from my loudspeakers. For instance, during Diana Krall’s cover of “L-O-V-E” from Turn Up The Quiet the piano hovered just outside and behind the speaker, but not in a vague or fleeting way. It was firmly grounded in space and sat there utterly immovable. This may the highest compliment I can give the Shunyata Delta D6 and Venom components: They made my rig less about electronics and more about music.

Suffice it to say that there is no guarantee that your results will mirror mine. You may even be of the belief that your system doesn’t need any help in the first place. I hear you. I’ve been there. As I said at the outset, with power products I’ve always been reluctant, but persuadable. So if you’re new to this segment, ask for an in-home audition of Hydra Delta D6 and Venom NR and see if you too are persuaded. If you already own original Venom HC power cords, my advice is to stick with them—they remain one of the best deals in audio. However, if you’re want a fairly major upgrade for a relatively modest expenditure, you may find Shunyata’s latest effort is among its best yet.