Schiit has all the answers. Or at least they have enough reasonably priced products to furnish a full system (sans loudspeakers), whether it be on the desktop or full two-channel. It’s an impressive line of products, and one that has largely remained in the sub-$1k range, which in itself is worth talking about. It’s also all made in America, and its designs are admirably consistent across component categories. I’ve wanted to review a full Schiit system for a while now, and recently settled for a nearly full Schiit system instead: the Freya+ preamplifier ($899) and the updated Bifrost 2 DAC ($699).

Starting out and working my way in, the Bifrost 2 is a “True Multibit” DAC, employed in conjunction with Schiit’s custom in-house digital filter. The Bifrost 2 also incorporates a new proprietary USB input, called Unison USB. Beyond that, Schiit took the original Bifrost and gave it some upgrades. It changed out the power supply, switched to a new 18-bit Analog Devices AD5781ARUZ D/A converter, swapped in that new custom USB, and made future updates easier. The Bifrost2 also includes a remote control (for source switching and phase inversion) and balanced outputs, which is nice. It accepts formats up to 24/192 on all inputs (USB, coax, optical). But truth be told, I’m not much of a digital person, and a lot of the technical jargon goes above my head, and I suspect that holds true for the majority of hi-fi listeners. So to simplify just a bit, the Bitfrost 2 is a serious DAC with the ability to play a wide range of files, accepts USB, coax, and optical inputs, and works on most platforms.

Next up is the Freya+ preamplifier. It functions in one of three modes: passive; differential solid-state buffer for balanced outputs; and differential tube gain for that sweet, syrupy tube sound. Which also means that if the tubes ever go out, you can switch over to the solid-state mode while they’re being replaced. And let’s be honest: Tubes do go out. They start making weird sounds; they hiss, fart, burp, and make all other manner of very rude noises. It’s just the nature of the tube. Schiit claims the Freya+ tube stage is “whisper-silent,” and I found that to be more or less accurate, but tubes are never going to be perfect. 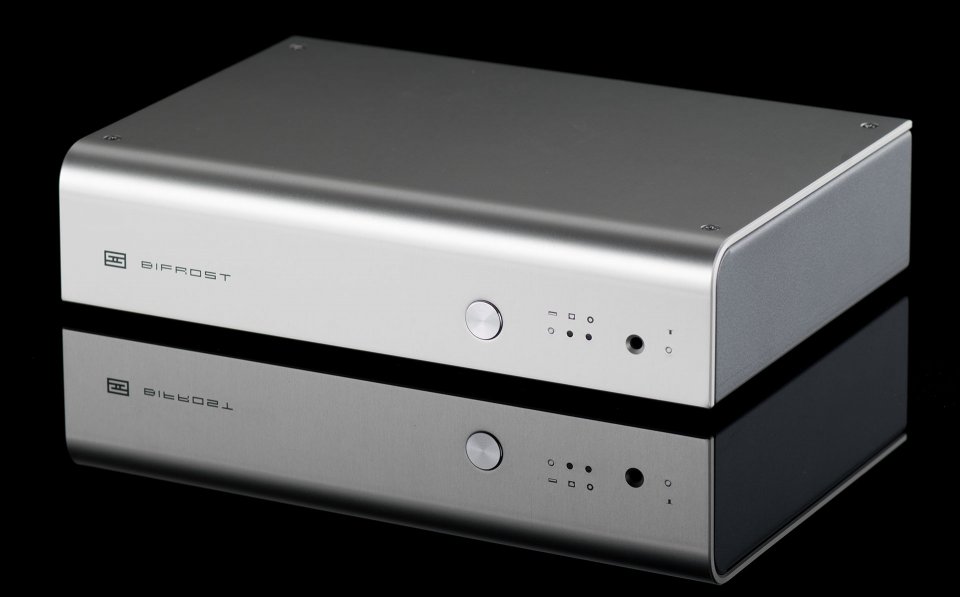 There are a total of five inputs, two balanced and three unbalanced, along with one balanced output and two unbalanced outputs. The volume control uses a relay-switched stepped attenuator; so there’s some fun clicking when it turns. And finally, most important of all, there’s a remote, a very nice, heavy slab of aluminum with mute, volume, output mode selection, and input selection. Historically, Schiit remotes have been a little on the boring plastic-afterthought side, but this is a nice little hefty thing. So good job, Schiit.

Overall, both the Freya+ and the Bifrost 2 exemplify Schiit Design Theory Principles. They both feature the curved sled front, where the front face and the top plate are one single bent sheet of aluminum that slides on to cover the bottom, sides, and back, where the guts reside. Both my units are industrial silver, which I always prefer, although the Bifrost 2 does come in black. The volume control knob on the Freya+ and the source selection buttons on both units are very shiny, which I know is a primitive small-brain sort of thing to point out, but in general I don’t find Schiit to be all that great about aesthetic details. But here, those shiny knobs give Schitt’s otherwise very basic forms a slightly more elevated look. Schiit gear generally shies away from fancy LEDs, soft-touch buttons, and big fat chunky faceplates with intricate racing stripes, and favors high-quality components that hopefully sound good. At least that’s the theory, anyway.

Getting set up was pretty straight forward. I connected my Cambridge Audio CXN v2 to the Bifrost 2 via coax, connected the Bifrost 2 via unbalanced RCA to the Freya+, and ran the Freya+ into my Parasound Halo Integrated 6 in home-theater bypass mode, which essentially turned it into a power amp. Later on, I swapped out the HINT 6 for a more traditional power amp, the Emotiva A-150. However, I actually preferred the sound I got from my HINT 6 over the Emotiva, so all my listening notes will be based on that setup, unless otherwise noted. I also stuck with the supplied 6SN7 JJ tubes, frankly because I don’t feel like tumbling into the tube-rolling money pit again, but rolling is a real thing and worth trying out if you have unlimited cash, patience, and a masochistic streak.

Okay, all of that out of the way, I powered everything up. And my first impressions were very positive. Schiit claims the Freya+’s tube stage is quiet, and it’s definitely right about that. I’ve had some noisy, hissy, angry tubes in my system, but I can hear absolutely nothing at a moderate volume from my listening seat through my fairly sensitive GoldenEar Triton Three+ speakers.