Love and marriage, peaches and cream, Homer and Jethro—some things just go together naturally. Schitt Audio has added another potential combination to this pantheon of duos, the Modius DAC and Magnius preamplifier/headphone amp. Each priced at $199, these two mini-priced and -sized components were designed to make beautiful music together. Are they worthy of the august pages of this publication? Do bears listen to Schiit in the woods? (Sorry.) I think we’ll turn these devices on, and find out.

Unlike many manufacturers who attempt to bury a prospective purchaser under a mountain of technical literature and “white papers” Schiit is less effusive with technical minutiae, though it does supply the essential stuff in its FAQs. For the USB input of the Modius, Schiit has its own proprietary “Unison USB” input connection, while for SPDIF the AKM 4113 chip is used. Both feed an AKM 4493 DAC chip, which supports PCM from 16/44 up to 24/192. Because of Schitt’s parts choices and philosophy, the Modius does not support MQA or DSD, but it does support Roon as an endpoint. The analog sections of the Modius use an LME49724 IC for balanced output, and an OPA1662 IC for SE output. (These balanced and single-ended outputs are independent of each other.) Precision thin-film resistors, film capacitors, and DC coupling are found throughout Modius’ circuitry. The Modius does not offer a menu of different digital filter options. Instead the digital filter is fixed, so you can’t alter the Modius’ sound.

Schiit is justifiably proud of its proprietary USB input scheme, which is not based on XMOS or C-Media technology. According to Schiit, the company spent the equivalent of two person-years on the USB development process. And while Schiit feels its USB is a better solution than an off-the-shelf chip, it does have some limitations compared to a standard USB implementation. As I mentioned earlier, the Mobius does not support MQA decoding or DSD files. If you wish to play MQA your playback application must do any and all unpacking before the file is sent to the Modius; otherwise it will still be 44/16 regardless of its unpacked bit-rate. To play DSD files through the Modius you will need to convert them to PCM before their data are sent to Modius. With the playback apps I use regularly—Roon and Audirvana+—I could do the first MQA unpacking via software, and I changed settings to convert DSD to PCM easily. Granted, you won’t get that final decode from MQA or pure DSD, but you will get a signal that should (and did) sound quite acceptable.

A preamplifier, any preamplifier, is only as good as its volume control scheme. Most $200-and-under preamplifiers do not have high-quality volume potentiometers. Inexpensive pots often cause channel imbalances, especially at lower levels, along with reduced long-term reliability. Schiit decided on a well-above-average volume pot, the Alps Blue Velvet RK27144, which is a 4-gang, 27mm-diameter volume control that supports true balanced operation. It’s the same part used in Schiit’s Jotunheim R preamplifier. And while it lacks a gold-plated or highly polished silver knob to telegraph its quality to everyone within eyeshot, it is extremely smooth in function, and should hold up to many years of twisting and turning, which is an especially good thing since there is no remote control to share volume-adjustment duties.

All internal switches are also made by Alps, while the XLR connections are manufactured by Neutrik. The Modius has two different output signal chains. The balanced outs utilize a LME4972 differential op amp. The Modius gain stage consists of composite amplifier technology that employs an OPA1688 in feed-forward to drive the LME49724 differential as well as the TPA6120A2 output stage. 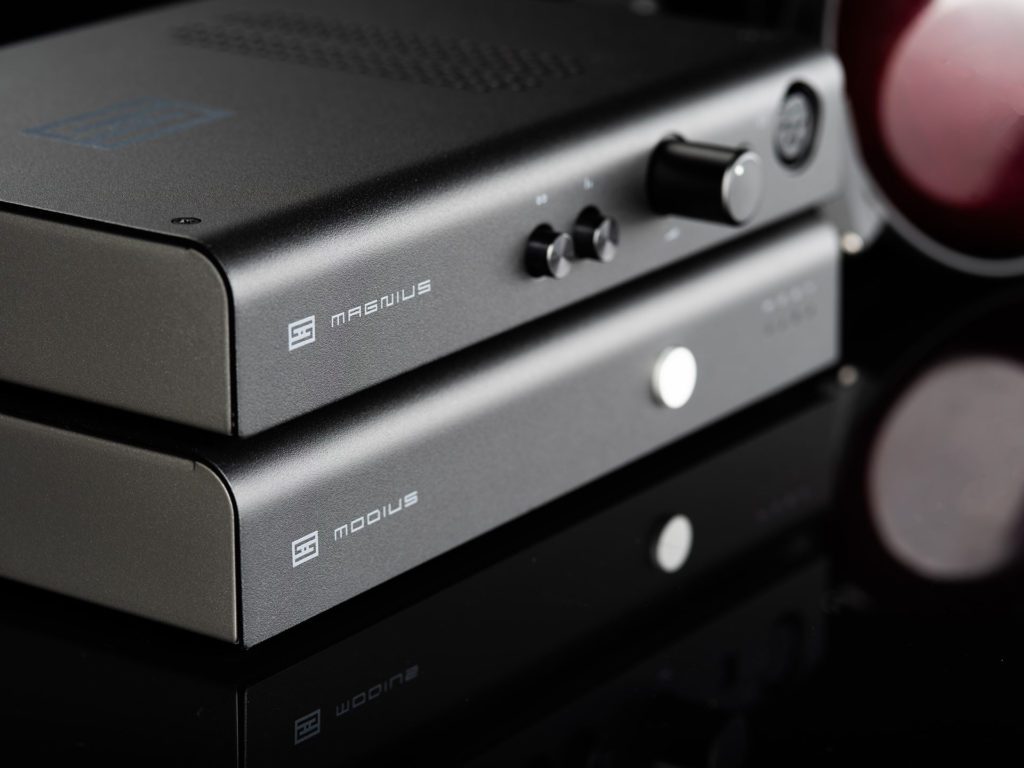