Ninety-nine dollars. What does that buy you these days? If you focus solely on high-performance audio gear, it buys you some pretty cool stuff. I can think of at least a half-dozen more-than-listenable earphones for that amount, or less. And companies such as FIIO have players that support up to 96/24 FLAC files for under $100. But what if you want a headphone amp that can drive difficult headphones? Well, Schiit Audio has that covered, too, with its new Magni 3 headphone amplifier. Schitt claims its Magni 3, which costs less than a C-note, can not only power hard-to-drive headphones, but is also quiet enough to use with in-ear monitors. Let’s see if this Schiit is for real.

Technical Details
The Magni 3, while inexpensive, is not some cheaply made, replace-as-soon-as-possible component. Even its metal case sports a better-quality finish and more robust construction than the vast majority of “entry-level” components I’ve seen. While I didn’t try this, I suspect that you could run over the Magni 3 case with a Ford F-150 without damaging its inner workings. 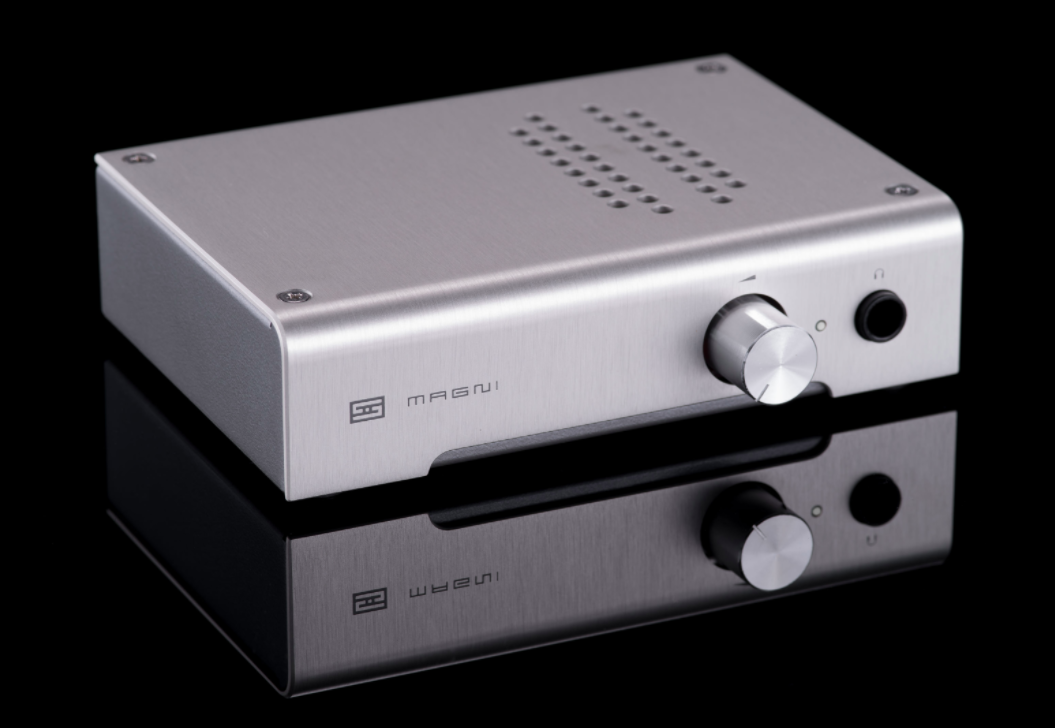 On the tech side the Magni 3 has some excellent specifications. With less than 0.001% total harmonic distortion from 20Hz to 20kHz at 1 volt RMS, and less than 0.02% at 5 volts RMS into 32 ohms, its intermodulation distortion figure is under 0.001% CCIF. Signal-to-noise is a very quiet 108dB unweighted at 1 volt RMS. Crosstalk is -70dB down whether the gain is set for 6dB (low) or 17dB (high).

Schiit calls the Magni 3 a “fully discrete, fully complementary, all-bipolar, symmetrical current-feedback design with no capacitors in the signal path and DC servo.” The power supply is a wall-wart style 24VA/14VAC transformer that is regulated to produce +/-17-volt rails with over 6000uF filter capacitance.

As its name suggests, the Magni 3 isn’t the first Magni that Schiit has produced. The Magni 3 replaces the original Magni and the Magni Uber. The Magni 3 has double the output power of the original Magni and adds the preamplifier outputs and aluminum top from the Uber. Other differences include the new fully discrete gain stage, faster shutdown due to a new muting circuit, and an improved potentiometer curve with a slower ramp-up from low volume. For those inclined to modify and tweak everything they buy, one word of caution: Don’t try replacing the stock power supply with a “better” one without first checking the specifications; the Magni 3 uses an AC wall-wart, not the far more ubiquitous DC version.

Ergonomics and Setup
The front panel of the Magni 3 has three elements: a volume knob, a white LED, and a standard ¼” stereo headphone output. The Magni 3’s rear panel has one pair of RCA single-ended inputs, one pair of single-ended RCA outputs, an on/off switch, a high/low gain switch, and a connector for the power-supply cable. The variable-gain RCA outputs make it possible to use the Magni 3 as an analog preamplifier, which you can connect to either a pair of powered loudspeakers or to a power amplifier. The Magni 3 supports the standard convention—when you plug in a pair of headphones the preamplifier outputs on the back of the unit are muted.

I used the Magni 3 in several different setups. For a good part of my listening it was tethered to Sony’s flagship portable player, the NW-WM1Z. I also used the Magni 3 with several other players including the Onkyo DP-X1, Astell&Kern KANN, and Questyle QP1R. Because my AC power is rather noisy I used the Magni 3 connected directly to the wall for the first week before connecting it through the Audience aR2p ($695) power conditioner for much of the rest of my listening. (With my most sensitive in-ears I felt the noise floor was slightly lower with the Magni 3 plugged into the Audience AC device.) I also used the Magni 3 connected to the output from the Sony TA-ZH1ES headphone amp/DAC so I could compare it with that unit. I got to the point where I could do a switchover in seven seconds. Finally, I used the Magni 3 in my desktop system, fed from the analog output of the Mytek Brooklyn DAC, and outputting to the Optoma/Nuforce STA-200 power amplifier driving either the ATC SCM 7 II or Audience 1+1 loudspeakers. Setting up this system with a subwoofer required using splitters from the two RCA outputs to supply the sub with a signal.

During the review, I came to appreciate Schiit’s gradual ramp-up for the first two-thirds turn of its volume knob. Matching levels and getting that perfect volume were much easier with the Magni 3 than with the more rapidly ascending gain controls found on many headphone amps. I also was impressed by the build-quality of the headphone output hardware. I plugged and unplugged the Magni 3 plenty of times, and its connections felt just as tight and secure by the end of the review period as they were at the outset.

Sound
As with power amplifier and loudspeaker pairings, the sound of earphones and headphone amplifiers is a merging of the sonic signatures of both. Discussing the “sound” of any amplifier is often more about the synergy and control (or lack of it) between the amp and a particular transducer. That said, the Magni 3 is the electronic equivalent of a Universalist Unitarian—it got along with everybody. High-sensitivity in-ears, including the Ultimate Ears 18+, Empire Ears Zeus, and EarSonics S-EM9, all presented a quiet “black” background with a lack of noise, hum, hiss, or other amusical electronic artifacts. On the other side of the coin, tethered to my most power-hungry cans, the Beyerdynamic DT 990 600-ohm version and second most-power-hungry HiFiMan HE1000 V2, the Magni 3 had enough clean gain to provide room to spare on its volume knob, even on my own live concert recordings (which are about 6dB less loud than most commercial releases to allow for unfettered dynamic peaks).

But, really, you wonder, how does it sound? To help me string together sufficiently pithy adjectives I spent several hours A/B’ing the Magni 3 compared to the Monoprice 16154 stereo tube headphone amplifier ($299), which has a classic “tube-like” sonic character. I used the HiFIMan HE1000 V2 for this comparison. On some music, especially tracks with a lot of out-of-phase information, the Monoprice produced a slightly larger soundstage, but it did not have the same degree of precision in its lateral focus. The Monoprice also had a slightly warmer harmonic signature, with a bit more lower midrange energy. The Magni 3 had far better bass and sub-bass control, pitch definition, and drive, as well as a more dynamic upper midrange. On some selections, some listeners might prefer the Monoprice’s presentation, but the Magni 3 was more harmonically neutral and had greater dynamic contrasts than the Monoprice amp.

Going from comparing a $99 headphone amp to a $299 one, to comparing a $99 to a $2199 headphone amplifier seems like quite a stretch, but that was my next A/B. As I mentioned earlier the setup had the analog output of the Sony TA-ZH1ES feeding the Magni 3. This way the Sony and Schiit had the same DAC source. Also, the Sony was set for fixed output so its volume adjustment was out of the circuit. Once I got the volume settings matched I could switch from one amp to the other in seven seconds. After several listening sessions over several days I could only conclude that with my current (and only) set of ears I could not reliably tell a difference between the two headphone amps using a wide range of ’phones including the HiFiMan HE1000 V2, Sony MDR-Z1R, and Acoustic Research AR-H1, as well as the Ultimate Ears 18+ and EarSonics S-EM9 in-ears.

When I used the Magni 3 as a preamplifier, getting an analog feed from the Mytek Brooklyn, I could not do a fast enough switchover to the Mytek directly feeding a power amplifier to do any A/B listening. But, during longer listening periods I did not feel that the Magni 3 as preamplifier was a noticeable step backwards in fidelity compared to the Mytek by itself. Both sounded exceedingly clean and inner detail was exceedingly well defined.

Competition
I had originally planned to include the JDS Labs Objective2 headphone amp ($129) in this review, because it has for several years been a well-regarded entry-level model, is similar to the Magni 3 in price, and is also made in the U.S.—plus I happen to own one that I acquired through a Massdrop offering. But when I hooked up the Objective2, it worked for about a half an hour after which I was greeted with silence. I tried a recharge, but the fancy rechargeable batteries were dead, Jim. So, instead of a sonic A/B we will look at how the two amplifiers’ features differentiate them. Yes, they both drive headphones, but the Objective2 uses internal batteries for its power supply, so it can be used untethered from a power source. The Objective2 also includes a simple crossfeed circuit. In power output, the Magni 3 produces 230mW into a 600-ohm load while the Objective2 only produces 8mW. The Magni 3 also has better signal-to-noise figures, with an SNR greater than 108dB at 1V RMS, while the Objective2’s measured S/N figure is 105dB at only 400mV.

If desktop use will be the primary application for your headphone amplifier (and if you also need or want an analog preamplifier) I feel the Magni 3 would be a better option. But if you require a headphone amp for portable and travel use, the Objective2 has a far more useful feature set. Finally, the Magni 3 comes with a five-year warranty, while the Objective2 has a two-year one.

Summary
I suspect there are very few budget-priced mass-market components that can, if compared in matched-level A/B testing versus more bespoke options, acquit themselves as well as the Schiit Magni 3. For $99 it provides a simple and cost-effective way to drive a wide variety of headphones at or near their optimum sonic potential.

And while the idea of tethering a $3k+ pair of headphones to a $100 headphone amp might seem like a mismatch, if that component is the Schiit Magni 3 you would be surprised at how synergistic such a pairing can be. With Schiit’s 15-day no-questions-asked return policy, why not try it at home, for yourself, with your own hard-to-drive cans? I suspect that you, too, will be impressed. I’ve been around the audiophile block a few times, and I’ve seen more than a few so-called giant-killers in my day, but the Magni 3 could be the one of the savviest, high-value, high-performance audio purchases you will have a chance to make in your lifetime, or mine.