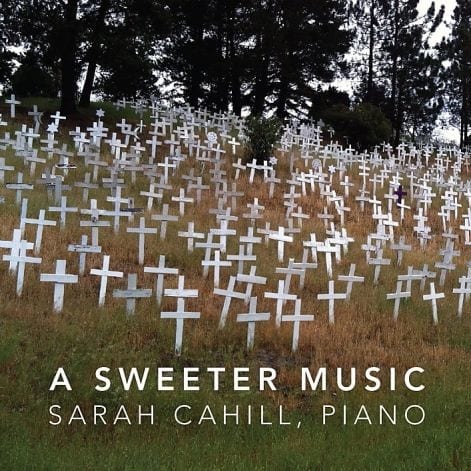 Everything Sarah Cahill has done as a champion of 20th-and 21st-century classical music in the San Francisco Bay Area—as a music journalist, radio programmer, and concert producer—pales in comparison to her solo piano recordings. A Sweeter Music, its title drawn from a Martin Luther King, Jr. lecture, is the first volume of pro-peace music the Berkeley native commissioned for concerts she performed in 2009 in California and then throughout the country. On the program are works by nine composers: Terry Riley, Meredith Monk, Frederic Rzewski, Kyle Gann, Carl Stone, Phil Kline, Yoko Ono, and the Residents. The selections are variously rooted in ragtime, minimalism, electronic music, post-modernism, and experimental/theatrical rock. Cahill approaches this eclectic repertoire with emotional and technical equanimity: Her playing is romantic but never florid or showy, precise but never cold or remote. A few tracks are augmented—Stone contributes electronics to his “Sonamu,” Cahill reads text from a 1933 speech, “War Is Just a Racket,” while playing Gann’s music, and the Residents add narration to their anti-war closer “drum no fife.” But Cahill’s pianism—diamond reflections on the surface of a fathomless ocean—embodies the message in its purest form.