The Continuum S2 integrated amplifier from the Jeff Rowland Design Group represents the latest chapter in the iconic brand’s pursuit of the state of the art, in this instance within the more rigid confines of a “single-box” integrated amplifier. Unlike a great artist working on a smaller canvas, confinement is not how I would describe the picture that Rowland has created here. This 400Wpc, fully balanced Class D design is an exemplar of refinement and scope for an electronic segment that has seen an explosion in popularity in recent years. In a conversation at CES, Jeff Rowland posited some reasons for the current trend toward integrated amplifiers. Simplicity for one—busy audiophiles searching for the performance of separates but disenchanted with their size and complexity. There’s also real-estate downsizing among empty-nesters. Condo living, however lavish, is vastly more conducive to smaller-footprint solutions. Compared with separates, premium integrated amps make for a better fit in a wider variety of applications.

Visually, the Continuum S2 is pure Rowland. The vault-like chassis is precision machined from aircraft-grade 6160-T6 aluminum, well known for its low resonance and structural rigidity. Set off by the optical elegance of Rowland’s trademark prismatic faceplate is an in-line series of small pushbuttons and indicator lamps for input selection, bypass, polarity reversal, and mute. A large, legible display accompanied by a volume wheel is offset to the right of center. The striated and matte-finished aluminum top and side panels are affixed via robust Allen bolts. Don’t go looking for massive external heatsinks or vents—the Continuum S2 circuits run cool, and are so efficient that the chassis can be completely sealed for high RF and EMI isolation. The back panel provides analog connectivity in the form of a pair (each) of balanced and RCA inputs, plus a pair of unity-gain inputs that can be converted via internal jumpers to a set of normal inputs. A set of balanced and unbalanced outputs is provided, as well. Cardas’ excellent clamping binding posts ensure a tight connection for speaker cables. 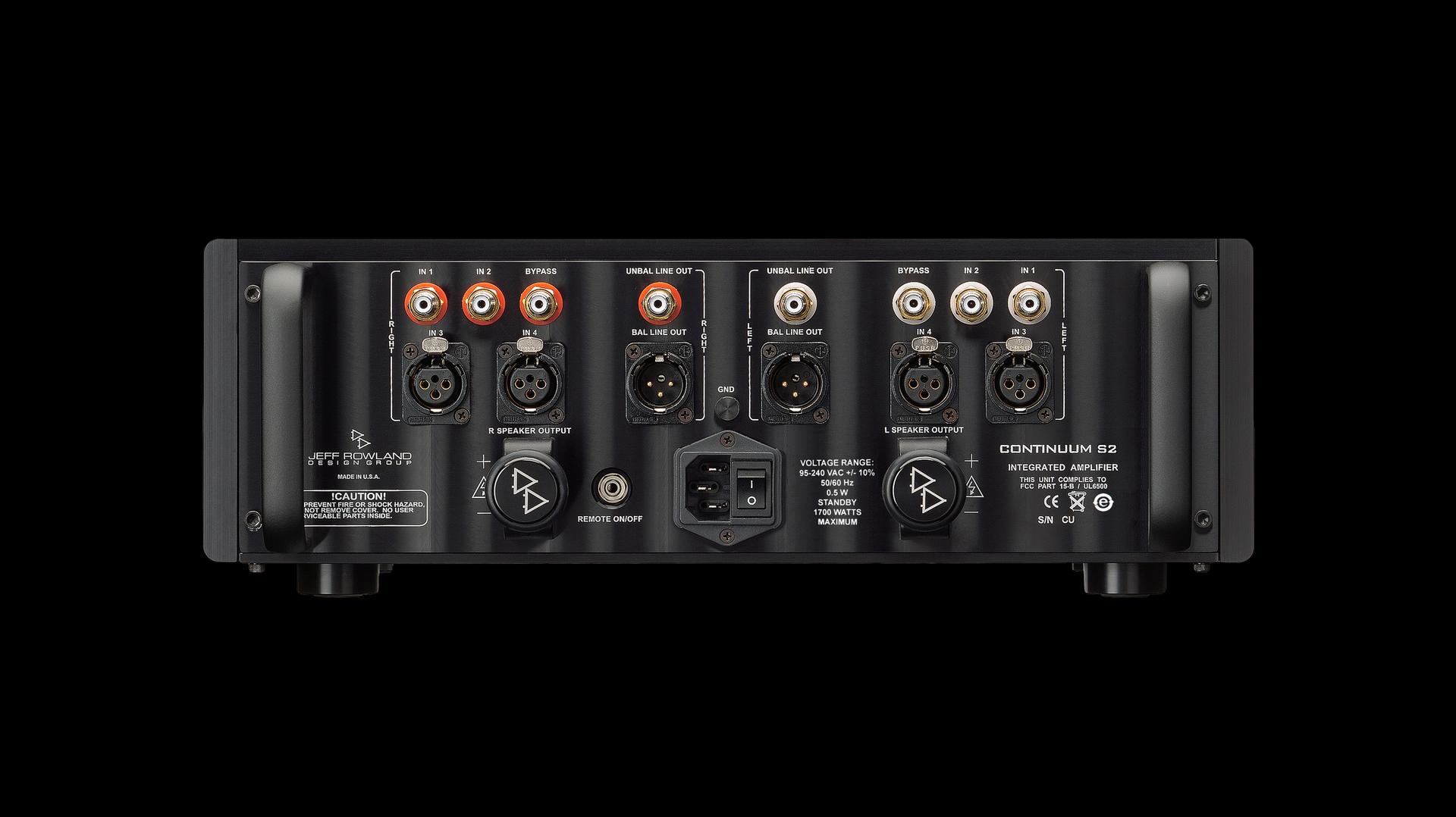 The nicely weighted volume control incorporates a noiseless optical encoder, has an excellent tactile feel, and is speed-sensitive to user input. Level adjustments occur over a nearly 100dB range and can be implemented at two speeds—rapid turns adjust the volume in 1.5dB steps, while normal spins are for ultra-fine 0.5dB changes. In contrast, the plastic remote control is more of an afterthought than an extravagance. But it’s usable and ably handles basic functions. (You might slip it into a drawer before giving your audiophile friends a tour of the Continuum S2.)

The Continuum S2 linestage is based on the topology of Rowland’s Capri 2 preamplifier. This circuitry is housed on one side of a four-layer circuit board to allow for continuous, unbroken, low-impedance ground and power-supply distribution planes. Signal path lengths have been minimized. Input circuitry is transformer coupled, which virtually eliminates ground loop noise and RFI/EMI, while also ensuring identical overall gain with all inputs. All resistors are of the 0.1% thin-film type, for extremely low thermal noise. The power amp section uses an ultra-high-efficiency power-conversion module. Sourced from Pascal of Denmark, it yields 400 watts per channel into 8 ohms, doubling into 4 ohms, with a peak current of 21 amps. A regulated, high-speed, low-noise, auto-ranging switch-mode power supply accepts all worldwide mains voltages. The role of the Continuum S2 can be expanded beyond its traditional linestage function via a pair of optional plug-in cards, specifically a phono card and a 192/24-bit DAC card. Choose wisely, however, as interior space dictates that only one of these can be installed at a time. The DAC card accepts SPDIF in sample rates up to 192kHz and bit depths of up to 24 bits. For the phonostage there are three gain and loading options to accommodate moving-magnet, moving-coil, and high-output moving-coil cartridges. Although installation is best left to the dealer, it’s easy to drop in either card. Take the phono card, for example: Simply remove the six Allen bolts and the bottom plate of the Continuum, select the load (100 ohm, 400 ohm, 47k ohm) and gain (40, 50, 60dB) settings on the left- and right-channel modules, remove jumpers, and then slip each one onto the waiting pins of Input One. A small bolt secures the modules onto the input board.

Tonal neutrality prevails in modern solid-state amplification and in much of the contemporary tube world. The Continuum S2 is no exception. In tonality and fidelity to the source, the S2 is a down-the-middle straight-shooter. Treble performance is lucid, with just a hint of dryness but absolutely no grain. Strings sing; brass is a mixture of lightning-bolt transients and honey-gold bloom. Soundstage width and depth are the only areas that seemed underrepresented by the Continuum, which is solid here but not transcendent. Still and all, the S2 reproduces music with an overarching clarity and definition whereby images seem to physically pop from within the soundspace—a characteristic that I noted time and again as I listened to the plucked harp and chamber ensemble that introduce Audra McDonald’s “Lay Down Your Head” from How Glory Goes [Nonesuch]. This Rowland separates out low-level information and defines the surrounding acoustic in a manner so convincing that even Felix Unger would drop his Swiffer in admiration.

A key S2 attribute is the dark silent backgrounds that the Rowland confers on acoustic recordings. There’s a complete absence of electronic hash—no veiling and no sense that a fine layer of dust needs to be brushed away from an acoustic image. The benefits that this lower noise brings are finer gradations of micro-dynamics and greater contrasts in tonal color and richness. The Rowland serves up a symphony orchestra with neat-freak orderliness, every instrument placed just so, but also with the ability to hone in on each instrumentalist without losing connectedness across the soundstage.

Lower mids and bass reproduction are superb in pitch and timbre. Bassoon, cello, and contrabass are darkly burnished, harmonically ripe, and pitched with tuning-fork precision. Bass control is as tight as the proverbial drum, and only as loose as a loudspeaker allows it to be. While the S2 doesn’t quite have the imposing, saturnine weight of big monoblocks, there is little sense of any attenuation of dynamic energy. I repeatedly listened to the orchestral kettledrums from Copland’s Fanfare for the Common Man and the rhythmic beat from Mick Fleetwood ’s drumkit on Fleetwood Mac’s Rumours, and in both instances bass was tightly controlled, punchy, and absolutely pitch perfect.

The performance of the S2’s internal DAC is very, very good across the board, and will likely satisfy all but the most finicky digital devotees. Throughout Peter Gabriel’s New Blood—a collection of orchestral versions of the singer’s classic hits—the Continuum teased out low-level details with ease, from the large-scale and spookily immersive atmospherics of “Don’t Give Up” to the harmonic sustain of the triangle motif on the tender “Mercy Street.” Equally compelling were the delicate metallic ring and sustain of the distant mandolin played during John Gorka’s “Let Them In” [AIX Records]. Of course there are an infinite number of pricier outboard DAC options from third parties, but keeping sources under one roof, so to speak, is what makes integrated amplification so appealing in the first place.

However, the last thing I expected was that the performance of the phonostage would catch me on my heels. Perhaps the analog audio gods were smiling on me, but shortly after I plugged in the phono card the Julie London classic 1958 Liberty Records LP, Julie Is Her Name, Volume II, arrived from Analogue Productions. It was the first record that the Continuum S2 phonostage saw. As I listened to “Blue Moon,” I heard that this early stereo disc had all the hallmarks of the day—from the reassuring tape hiss to the widely panned guitar and standup bass, and, of course, the seductive, satiny, “come hither” vocals of Ms London. It made an interesting contrast to Boxstar Records’ remastering of the earlier (1955) original mono release, Julie Is Her Name, which featured the astounding guitar fills and flourishes of the legendary Barney Kessel. Like all good mono LPs, especially those remastered by great engineers like Bernie Grundman, songs such as “Cry Me a River” and “I’m in the Mood For Love” sonically transcend the supposed limitations of the monaural medium and embody the dimensional aspects and image focus that we presume only stereo can capture. Listening to Holly Cole’s “Frank’s Theme”—a spare piano and harmonica piece—image specificity on a stunningly realistic and engrossing level emerged from the soft acoustic pockets on stage. While the S2’s phonostage can’t match the tonal density, three-dimensionality, and micro-dynamic nuance of a near-reference-level standalone unit like the Parasound JC 3+, it is still pretty darn good. And like the DAC option, it is a genuine bargain.

Perhaps the most striking statement the Continuum S2 makes pertains to the overall musicality of Class D amplifiers. Just a few years ago, the argument asserted in these very pages was that Class D wasn’t ready for prime time—the primary gripe being that it lacked extension, air, and transparency on top. True enough then, but that argument has been firmly laid to rest by a component like the Continuum S2. I asked Jeff Rowland what had changed. He replied that Class D is only as good as its implementation and integration within a greater amplification strategy—just as the engine in a Formula 1 car is only as powerful as the chassis, suspension, drive train, and transmission allow it to be. Rowland, a man whose knowledge about electronics is matched by few others in the high end, still feels that much of the Class D debate is like complaining about the first Prius while standing next to the Tesla P85D. You have to just get in and drive it. In the case of the Continuum S2, I couldn’t agree more. It’s elegant, poised, powerful, and a pleasure to experience. High fidelity just doesn’t get much better than this.