It’s funny how, when you think of a song by one of today’s female pop stars—Katy Perry, Taylor Swift, Selena Gomez, Demi Lovato—it’s never the voice that you remember. Your mind can conjure the tune and the words (assuming they’re at all memorable, and they usually aren’t) but rarely anything unique about the voice or the delivery. That’s because there isn’t anything unique about these singers. They are interchangeable.

Now think back to a Linda Ronstadt song—any Linda Ronstadt song. What your mind hears first and foremost is that voice: its power, its richness, its range. Next you hear the delivery, often highlighted by softly caressed verses segueing into grittily belted choruses. Stylistically, Ronstadt skips easily between pop, country, R&B, folk, bluegrass, standards, and even opera. Finally, you hear the song itself. Ronstadt isn’t a songwriter, but she has an unerring instinct for great material. And when she sang a song, it became hers exclusively, inseparable from its singer. Just try to imagine “You’re No Good,” “Blue Bayou,” or “Heat Wave” being sung by anyone else.

Tragically, in the early 2000’s, Ronstadt discovered that she had Parkinson’s Disease. One of the first functions the illness claimed was Ronstadt’s ability to sing. She officially retired in 2013 but hasn’t performed in nearly 20 years.

Yet now comes a new album, Linda Ronstadt Live in Hollywood, which captures a 1980 concert taped for an HBO special. For many reasons, my expectations ran high. Ronstadt herself selected the tracks, and the concert’s took place when she was at her peak. Furthermore, of all the Ronstadt compilations out there—and there’s a ton of them—this is her first live set. Finally, the download’s 24/96 resolution portended good sound.

There’s good and bad to report, so I’ll start with the good. From Live in Hollywood’s first note it’s evident that Ronstadt was in peak form for this performance. Her tone and trademark delivery are in gloriously full view. So what’s the problem? With further listening, it’s clear that the album doesn’t cover any new ground.

The best live concerts are an opportunity for an artist to stretch out: to take chances trying new material, to expose the crowd to unreleased and “deep” album tracks, or to re-imagine their hits. When it works, the artist sounds invigorated and the listener discovers new shades of both the performer and familiar works.

Unfortunately, Live in Hollywood offers almost nothing in the way of surprises or new insights. The album could just as easily have been titled Linda Ronstadt’s Greatest Hits: Live, because it’s essentially a compendium of her most well-known songs. Too, the singer is backed by her tried-and-true supporting band and backup vocalists. This could have been an opportunity to channel their superb musical talent into new arrangements; instead, they deliver note-perfect, less fleshed-out replicas of the studio versions. What was the point?

There are two exceptions to the above criticism. The encore, a cover of the Eagles’ “Desperado,” departs completely from the highly-produced studio version. Here it is sung accompanied only by a piano. It’s the most intimate, affecting song on the album. The other surprise is an extended instrumental jam in the middle of “You’re No Good,” which affords the band some time to strut their stuff.

However, these two divergences from the predictable aren’t enough to compensate for the rest of the album. Nor is the sound, which is good but doesn’t crackle with a live aesthetic. Aside from the crowd noises, from a sonic viewpoint—as with the arrangements—this could be a studio recording. 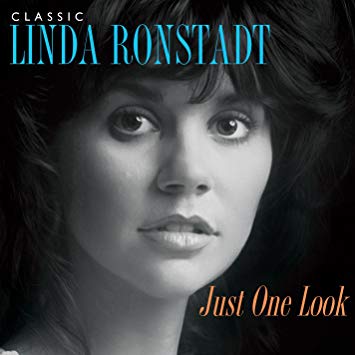 With no unreleased or even less familiar tracks, wholly familiar arrangements, and sonics that don’t stand out, this album is hard to recommend. Nonetheless, Live in Hollywood serves perhaps a higher purpose; it reminds us of what we’ve been missing without Ronstadt. It’s a prompt to rediscover her, or for neophytes to make her acquaintance.

For that I would refer you not to Live in Hollywood but rather to another fairly recent release, 2015’s Just One Look: Classic Linda Ronstadt. Here we have all the originals in a double album that covers a much broader span of Ronstadt’s career, including some of her earliest and last work, as well as a few non-hits that deserved to be.

The sound of the 24/96 download is quite good, too. Of course, sonics vary from track to track as they’re taken from different albums. But in general John Boylan did an able remastering job. So let’s welcome Live in Hollywood for reminding us how essential Ronstadt was and remains. But when it comes to making a purchase, there’s a better alternative. Just One Look is the perfect Ronstadt introduction or refresher.