The tenth installment of the Rocky Mountain Audio might have seen a dip in overall attendance–depending on who you ask–but there was no lack of enthusiasm. Bracketed by Cedia and CES, manufacturers typically don’t choose RMAF to debut new products but I found more than enough newbies or at least very recently introduced gear to make RMAF more than worth the flight. This year the buzz that was orbiting the show was the resurgence of DSD as downloads, and the newly introduced DACs required to support the once-left-for-dead format.  Finger’s crossed that the re-rollout of this format is given a second chance by consumers. Nobody wants to go through the DVD-Audio/SACD fiasco again. Speaking to that point, more than a few manufacturers I polled suggested that DACs are going to be a primary focus going into CES 2014. Similarly, we’re seeing greater high end attention paid to the popular headphone market. Headphone jacks are starting to pop up in the most unlikely of places. Witness the new ARC SP20 preamp (a first for that esteemed brand) if you want further corroboration. My beat this year was electronics. It’s a vast range and I was kept busy.  Here’s my first snapshot of highlights. 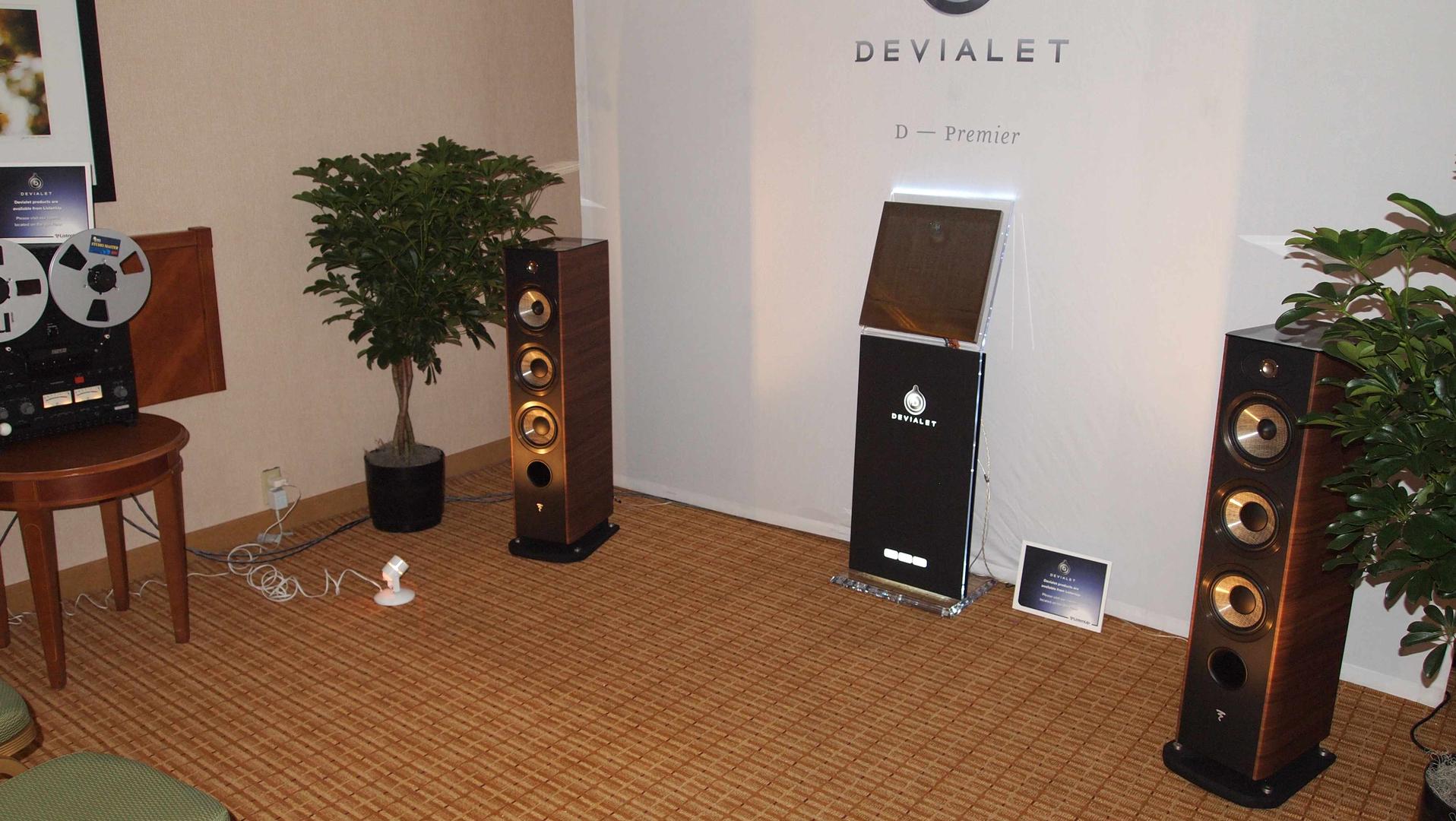 The expanding Devialet line (pictured above) of ultra svelte wall mountable and highly configurable DAC/WiFi, preamp/amp solutions debuted three new models at Munich but this was my first peek at RMAF. The models are the 110 ($6500), the 170 ($9495) and the 240 ($17,500) A master/slave version, the Double 240 is $32,500.  In this computer media application the 170 was driving the new Focal Aria 926 ($3295, an impressive sounding 2.5-way that sports Focal’s innovative flax fiber cone technology. The near full range output of the 926 was very very good but what delighted me most was the interdriver coherence of the presentation and the smooth integration of the tweeter. A quick road test of the Devialet iPad app and the ability to configure DSP and crossover settings via Ethernet continue to underscore the unique niche Devialet has carved in the electronics segment. A quick aside about the Focal;  I’d heard about the health benefits of flax fiber for sometime now but this was the first time I’d received its benefits sonically. I left the room a happier and perhaps healthier reporter for the experience. 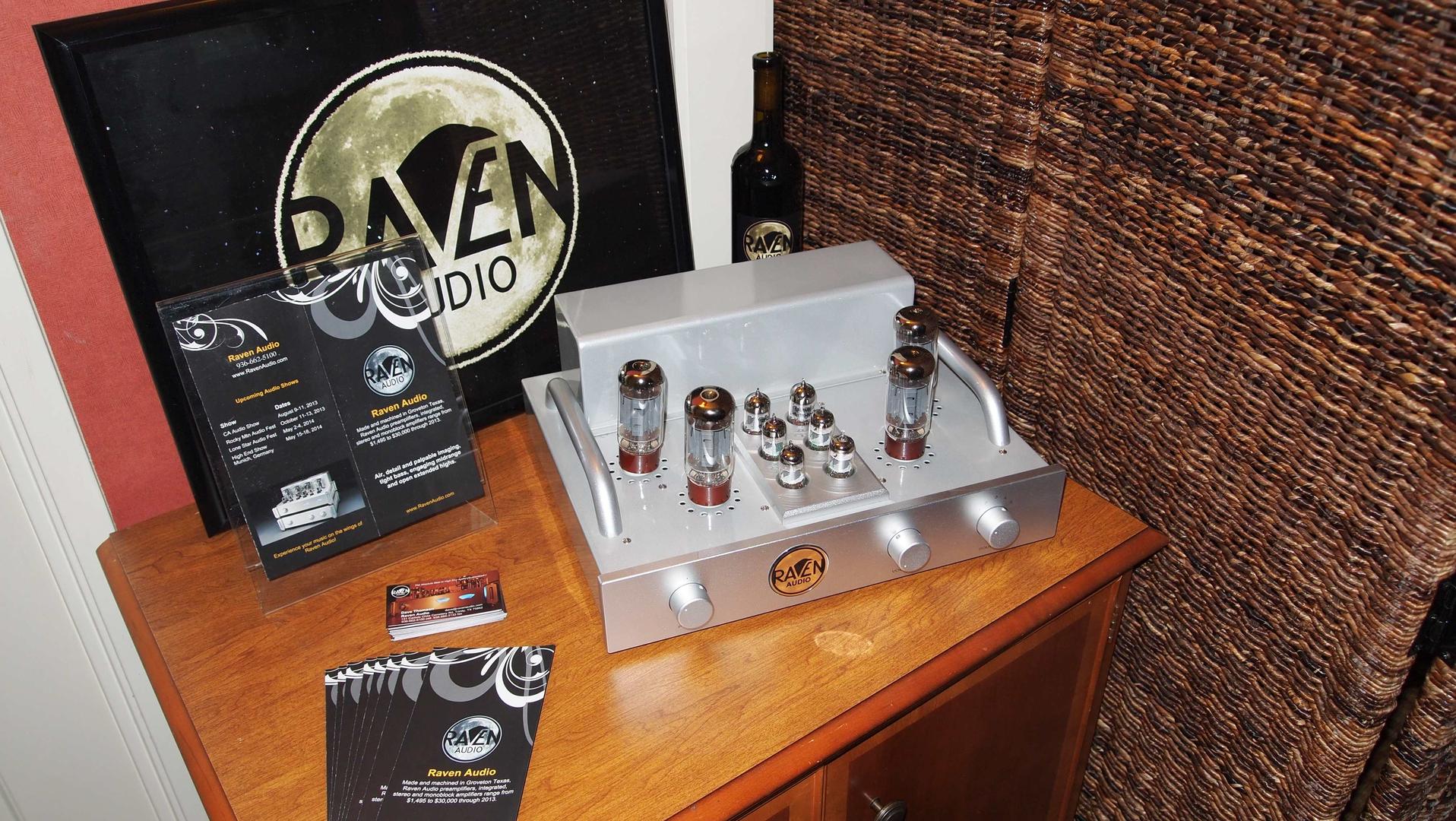 Raven Audio initially drew me into its room with Linda Ronstadt’s charming album “Canciones de mi Padre” disc playing through the Joseph Audio Perspective loudspeakers and RA’s Silhouette monoblocks and preamp (with built-in phono!) the amps use an all tube rectified power supply and can be biased for 655, KT88 all the way up to KT 120 valves. $13,000. Also on display were a stunning pair of integrated amps, the Reflection $6995 and the sweet, and petite Nighthawk(pictured above), a nimble 20Wpc at a persuasively blue-plate-special price of $1500. 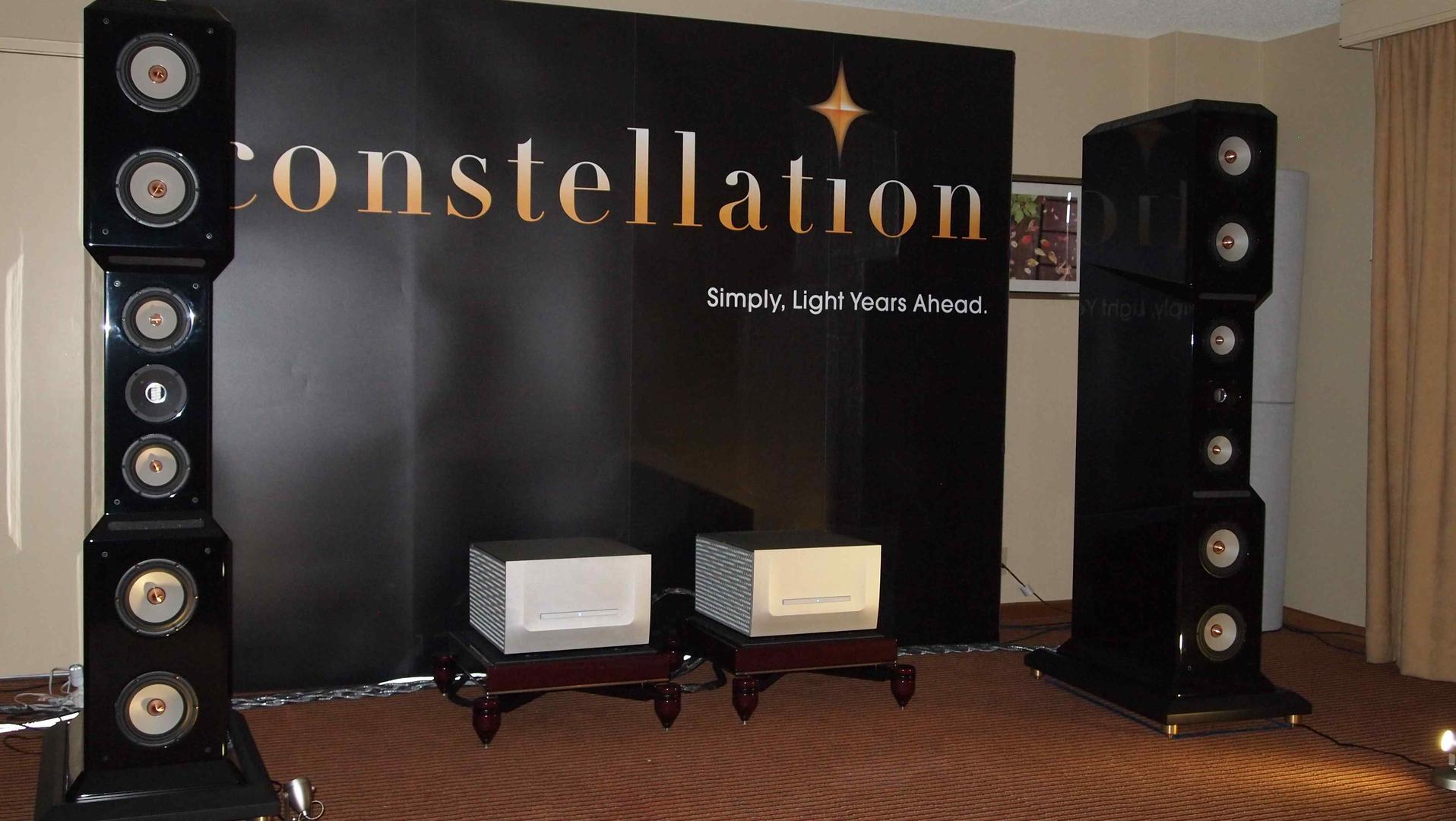 Constellation gear (Cygnus media player $29k, Virgo II preamp $24k, Centaur monoblocks $54k/pr) atop Critical Mass Systems racks was driving a gorgeous pair of piano black Von Schweikert Universe  VR-100XS loudspeaker (pictured above, $140,000) but as grand as the sonics were, that wasn’t the news that caught my ear. If all the stars align properly Constellation is looking to debut its first integrated amplifier for CES. Named the Argo, the 125Wpc unit uses, for all intents and purposes, the topology and innovation of the big Centaur amps but scaled down to roughly a quarter of that amp’s output. It will include its own discrete headphone amp and will be equipped with a pair of expansion slots for an optional DAC  ad phono stage ( both MM and MC) Price remains on a TBA basis but something in the vicinity of $19,000 is likely. 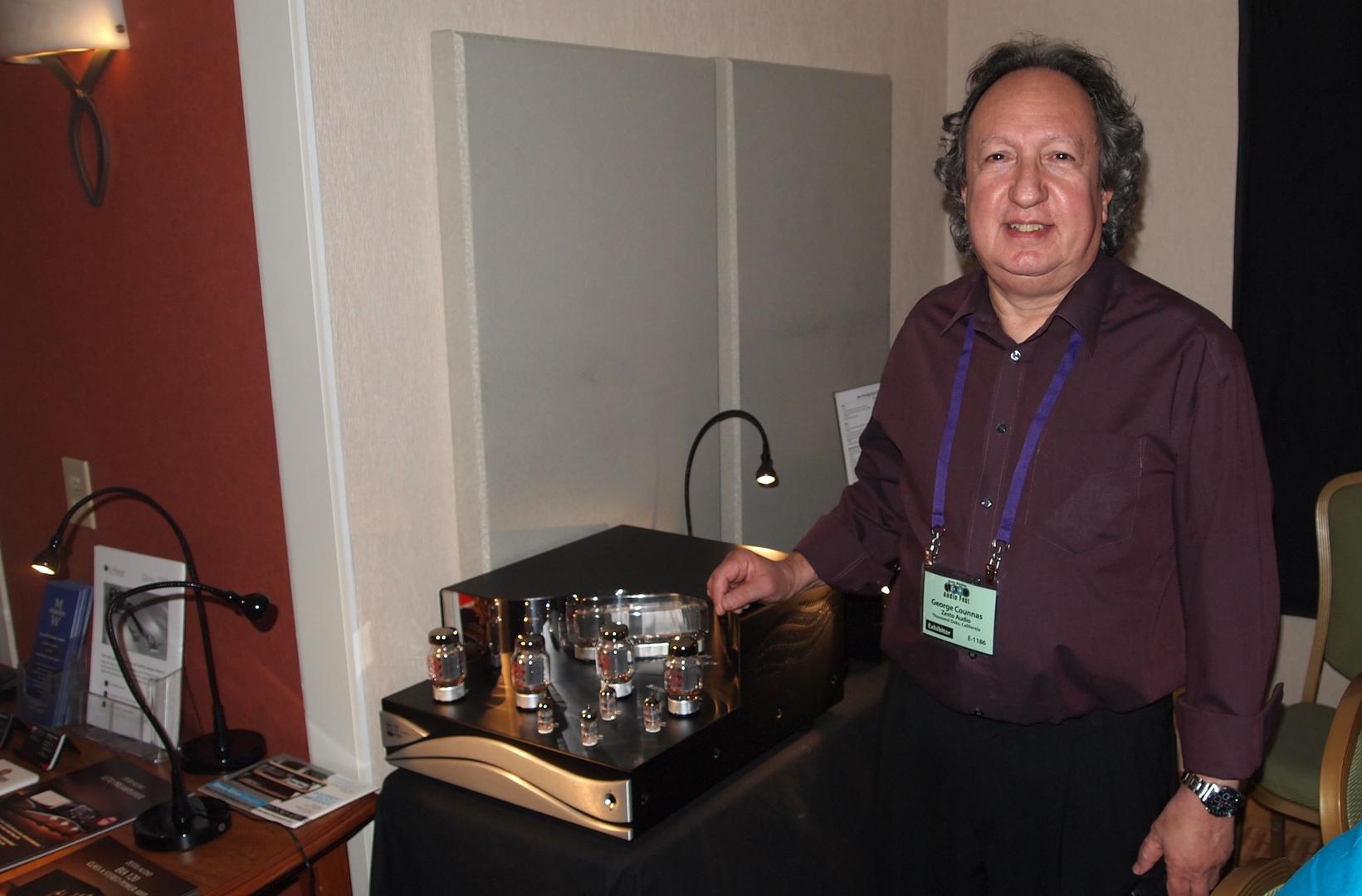 Zesto Audio debuted the final link in its electronic chain with the Bia 120 amplifier ($12,500). Joining the Andros PS1 phono stage and the Leto preamp, the Bia is a pure class A  design (push-pull, ultralinear) outputting 60Wpc from its dual mono chassis.  It’s equipped with auto bias to accommodate either KT88 or 120 tubes. As I listened to a range of music from the Merrill Williams/Tri-Planer/Dynavector XX2 front end including jazz piano what impressed my most was the wide soundstage the system created in the  relatively small exhibit room. It’s combination of power and control really complemented the propulsive, full-range dynamic energy and extended frequency response of the TAD Evolution 1 loudspeaker.  Yet, the E1’s also seemed a bit more relaxed overall, smoother with a greater suggestion of upper bass/midbass warmth than I’ve noted with solid-state. Cabling was courtesy of Wywires. 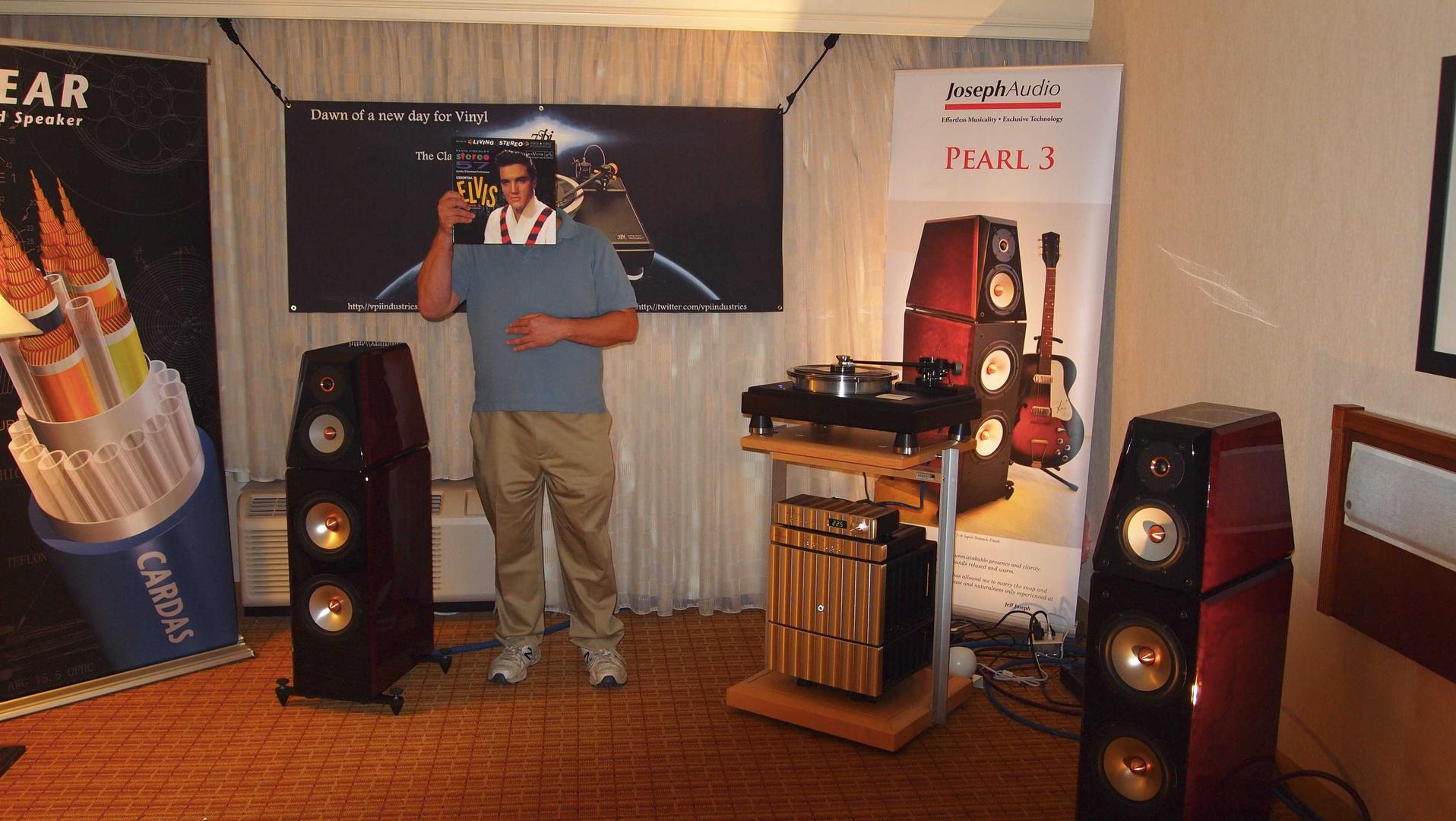 I had a few opportunities to listen to Jeff Rowland gear at RMAF but the Joseph Audio room seems to always manage to let electronics shine at their very best. Thanks to Joseph’s Pearl 3 ($31,500) perhaps his most persuasively naturalistic effort yet, I was lured into the room as if by tractor beam by the rich buoyant and involving sounds of Elvis singing “Peace in the Valley”-one of Acoustic Sounds superb new pressings, naturally. Power was courtesy of Rowland’s mega, 160 lb,  400Wpc, switch mode, 825 amp ($32,000) with Aeris DAC and Capri preamp ($4300 with phono!) the high contrast sonics conjured up dark walnut tones, the stunningly warm and discrete chorus images and of course  the effortless highs and top end air that didn’t always appear in such abundance in early Class D. However the same certainly cannot be said of that segment now-at least at Rowland levels.