Another year, another Rocky Mountain Audio Fest, and another wave of new digital audio gear. To experience all the new products required more walking and talking, and less listening, than I would have liked. I also saw far more new and just-revised digital products than I could possibly fit into this show report, so anything that was introduced previously at the Newport Show won’t be included here. Also any new digital products that were shown at CANJAM will be part of Chris Martens’ CANJAM report. So, let’s begin.

Lynx products are well known in the pro-audio world. Its new Hilo DAC ($2495) may make Lynx equally ubiquitous in high-performance audio. With a unique touchscreen interface, beefy headphone amplifier, and USB interface on an L-Slot expansion-port system that allows for interchangeability, the Hilo delivers four separate and discrete audio channels that permit simultaneous analog-to-digital and digital-to-analog conversions of a two-channel source. That makes he Hilo a perfect tool for vinyl enthusiasts who want to transfer their collection to digital. 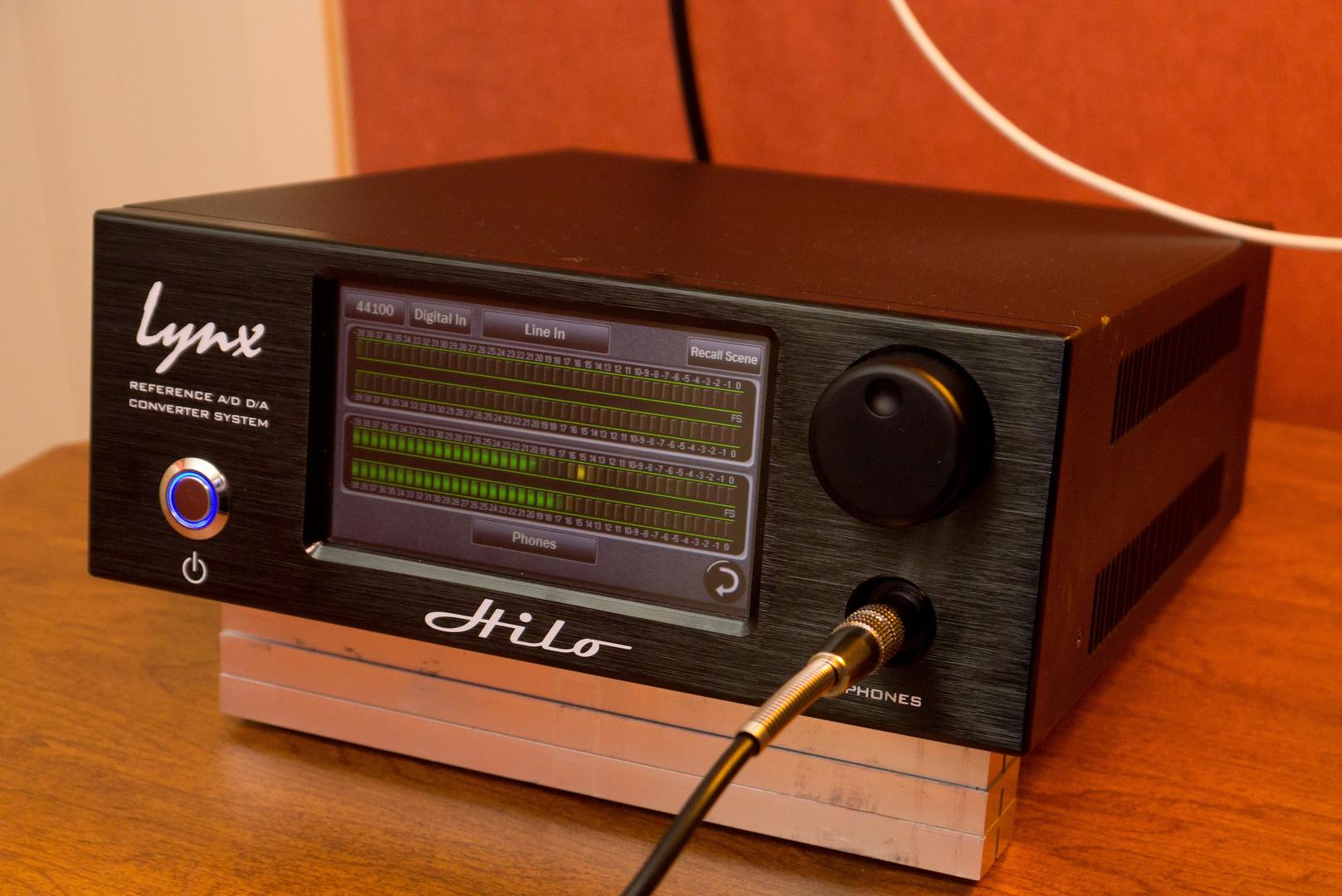 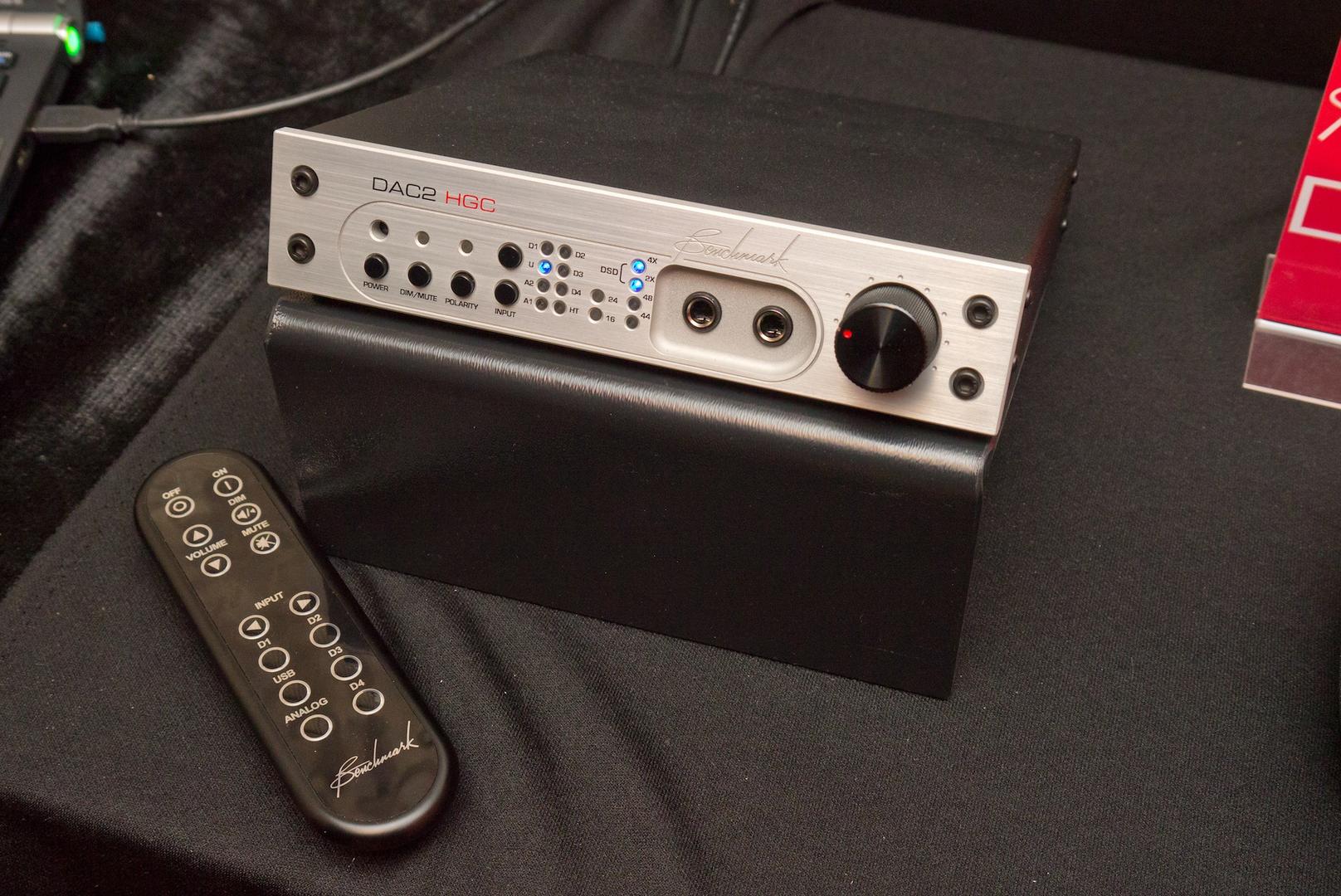 The ifi Micro line from AMR is a fine example of trickle-down technology. Based on what it has learned from its flagship models, AMR has developed four small-footprint, low-priced “micro” components. All share the same 6” by 2 ½” by 1” dimension and chassis shape. The iUSB ($199) is a power isolator/regulator that goes between a computer and your USB DAC to reduce any noise or interference from your computer’s power supply. The iDAC ($299) is an ESS Sabre-based DAC with headphone amp. The iCAN ($249) is a headphone amp with 400mW Class A output. Finally the iPHONO ($399) includes six built-in EQ curves, between 40 and 66dB of gain, and 90dB S/N with moving-coil carts.

Mytek is another manufacturer better known in the pro-audio world than among audiophiles, but its new Stereo192-DSD DAC ($1695) is going to change that in a big way. The Stereo 192 comes in three versions—one with front-panel status LEDs, one without, and one with a set of DSD input and output connections in lieu of an analog connection. All versions include DSD playback capability, 128dB dynamic range, programmable 1dB stepped analog attenuation, a relay bypass mode for direct digital output, and a high-quality built-in headphone amplifier. 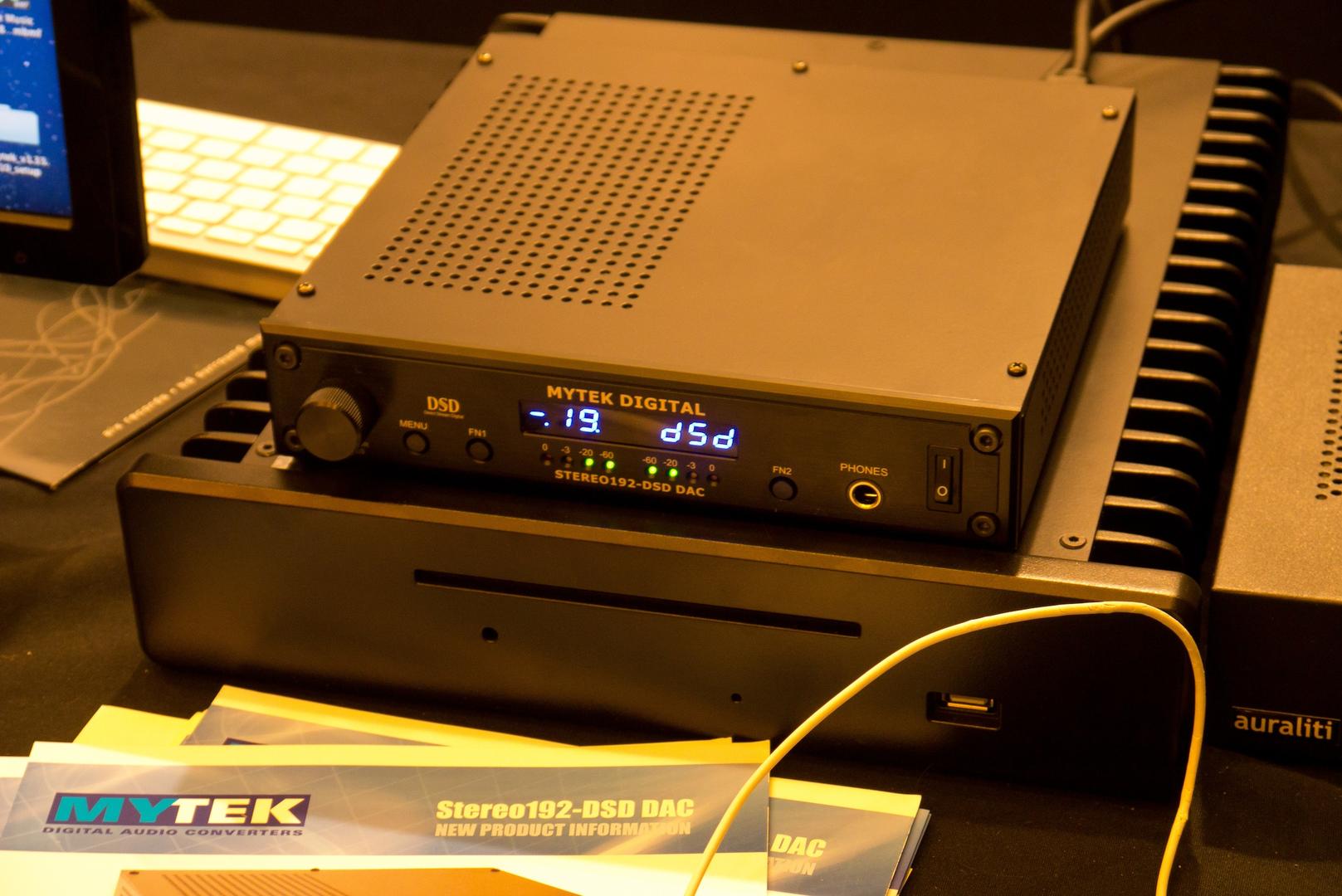 Unlike previous years, when Empirical Audio was in one of the lobby rooms, this year it showed up in Vapor Audio’s room on the fifth floor. The first production model of Empirical’s two-piece Overdrive SE DAC ($5995) featured BNC/SPDIF, Asynchronous USB, and I2S inputs, balanced XLR and single-ended RCA outputs, and a built-in “world-class” volume control to directly drive power amplifiers without the need for a separate preamp. Empirical also had the latest version of the Off Ramp 5 ($1295 base) and Synchro-Mesh Asynchronous Reclocker ($599) on display. 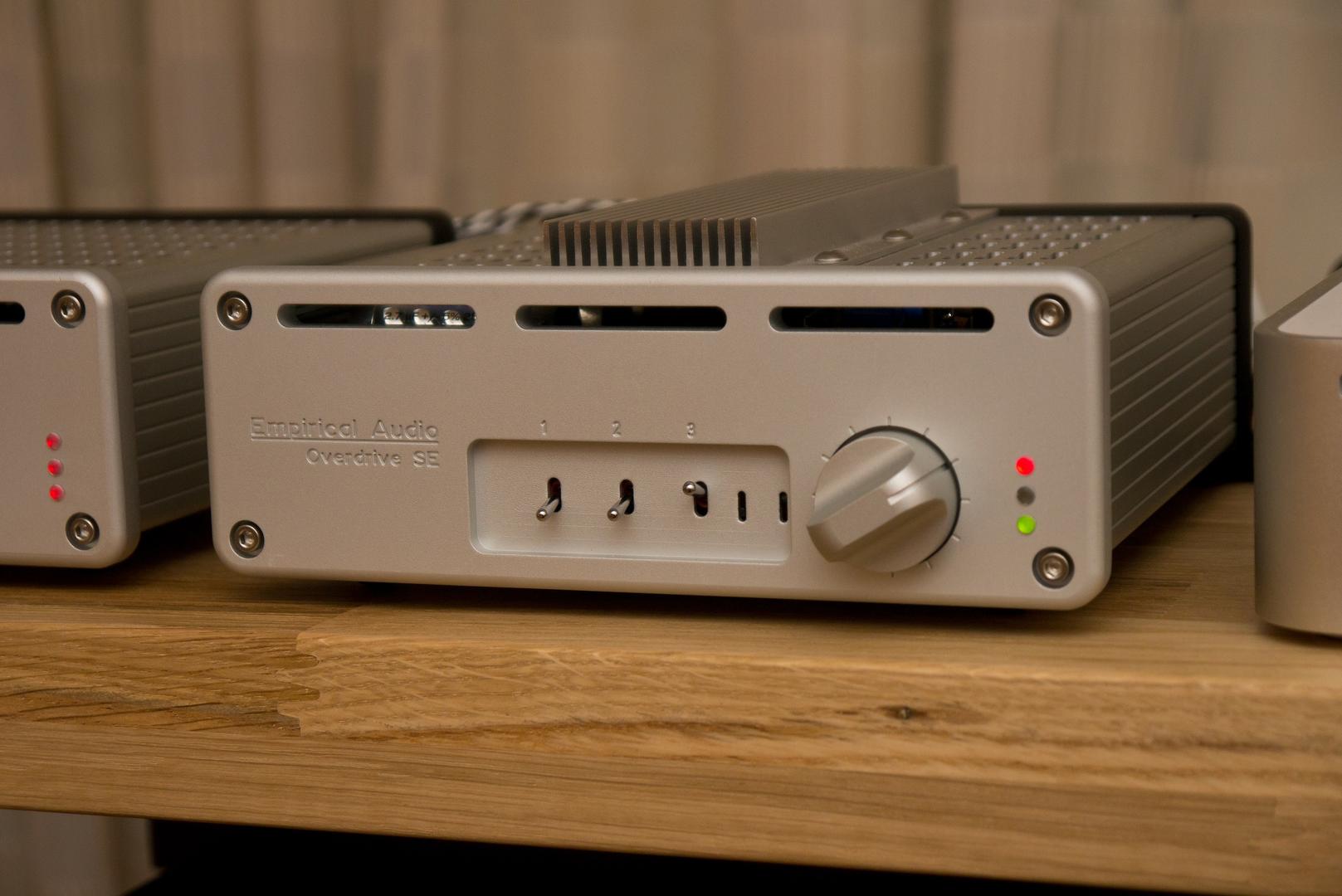 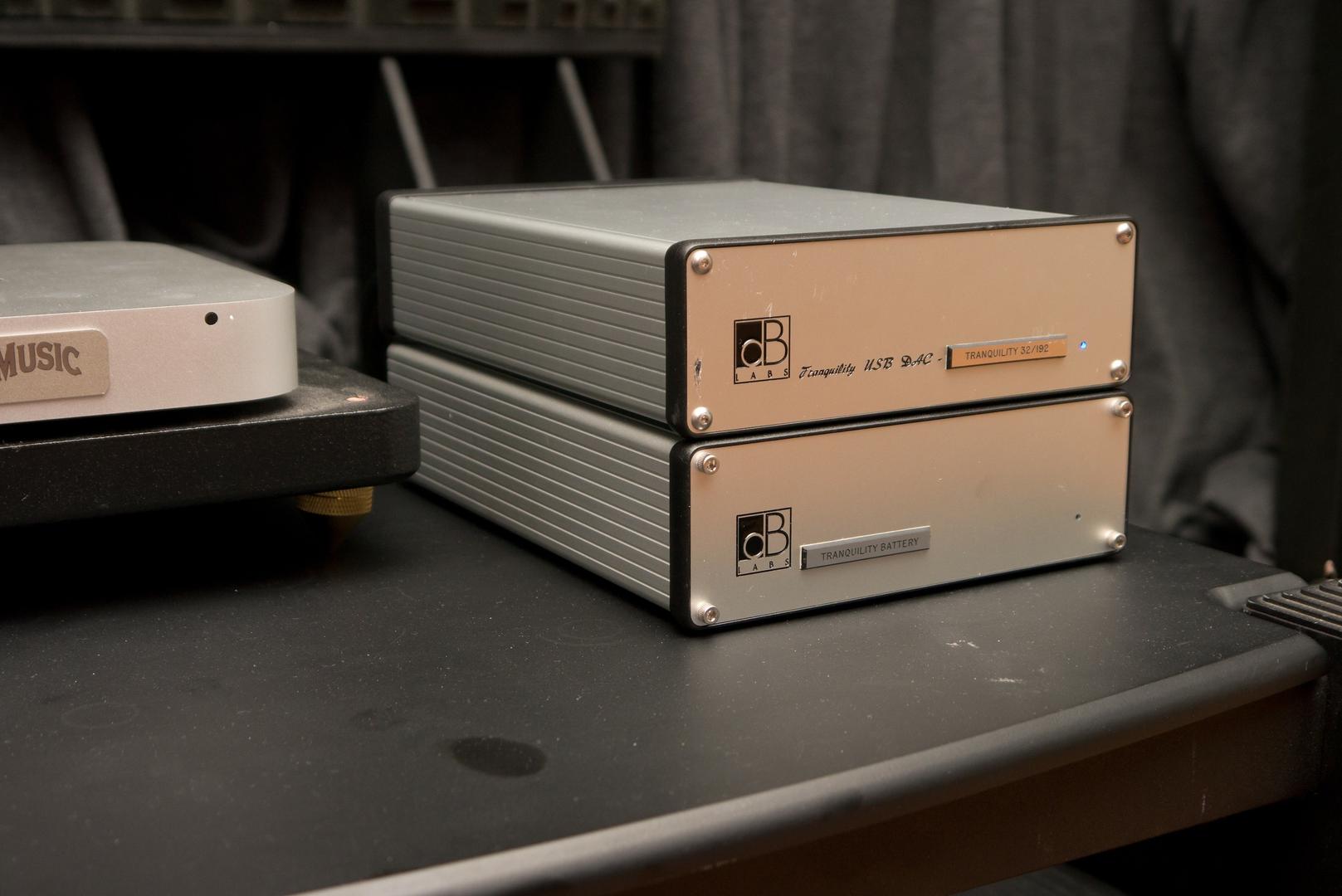 Japan’s Triode Corporation unveiled its TRV DAC 1.0 ($2499), which features both a tube and solid-state analog output stage. It uses the XMOS chip for full USB 2.0 compatibility, has a built-in headphone amplifier and dynamic range greater than 100dB along with greater-than-90dB channel separation.

Sim Audio displayed its latest DAC, the Moon 380D D/A ($3900). It was designed around Simaudio’s M-AJiC32 asynchronous jitter-reduction system, which operates in true 32-bit asynchronous mode using an ESS Sabre chip. With eight digital inputs the 380D should be able to handle even the most ambitious digital music system.

Wyrd4Sound rolled out three new digital products at RMAF, the mPre, the uDAC-HD, and the uLink. The mPre ($1099) is a fully balanced dual-mono design with three analog inputs as well as a built-in 192/24 USB DAC, headphone amplifier, and even a remote. The uDAC-HD ($499) is a small box with USB, TosLink, and S/PDIF in on one side and a set of single-ended RCA analog outputs on the other. The similarly sized uLink ($299) converts USB to S/PDIF. 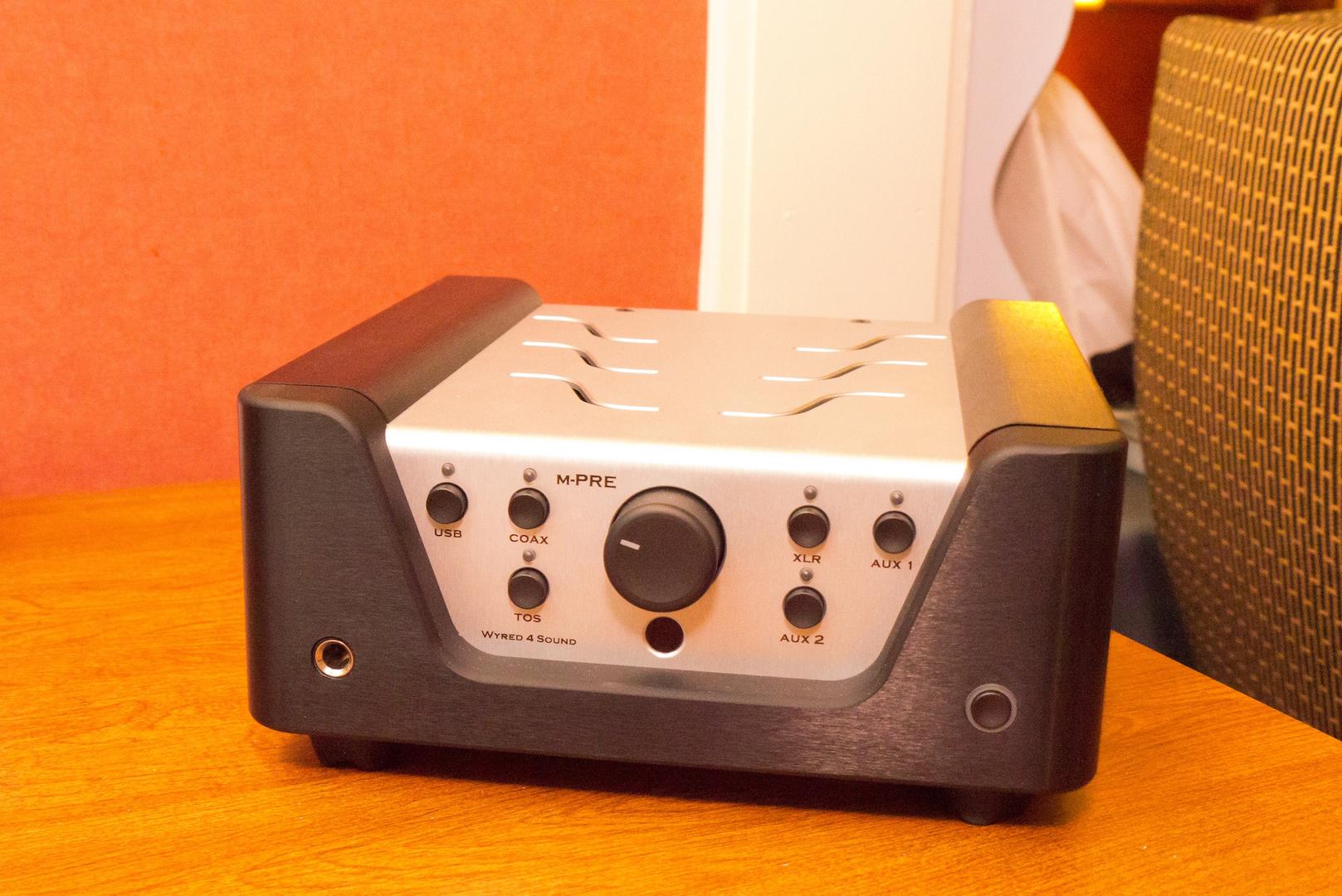 I would be remiss in my duties if I didn’t include dCS’s new Vivaldi “stack” made up of the Vivaldi Upsampler ($19,999), Vivaldi DAC ($34,999), Vivaldi Master Clock ($13499), and Vivaldi Transport ($39,999). Combined with VTL electronics driving the Wilson Audio Alexia speakers, the overall presentation and level of sonic finesse was unassailably state-of-the-art.

If an award existed for most visually arresting display of a new product at RMAF, it would go to Da Vinci’s 384K USB DAC ($20,000 base price). The passive demo had a solid Lucite case that was artistically lit to expose all its inner workings. Claiming to be “the world’s first bit-perfect asynchronous USB 2.0 DAC,” the Da Vinci chassis weights 61 pounds and is constructed of CNC-milled aluminum blocks. With a residual noise specification of better than-108dB, the Da Vinci DAC promises to sound as good as it looks. 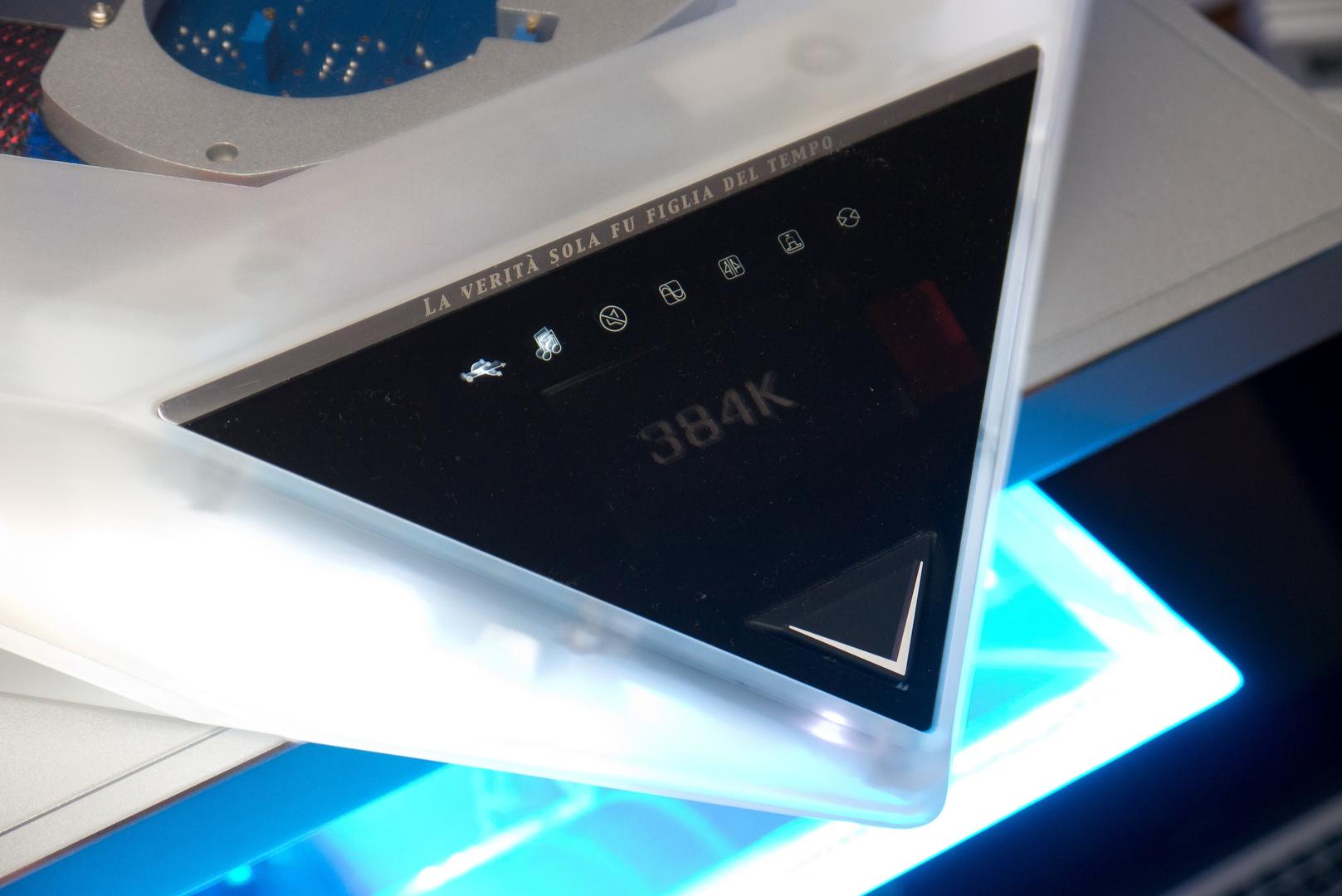 Salk, which is better known for its high-value speakers, unveiled a production model of the Salk Stream Player ($1295). According to Salk, “It contains nothing more than the absolute minimum hardware and software required to play audio through a USB port.” The control software can run on an iPod, iPhone, or Android device, and the initial set-up interface works via an Internet-based “expert system” program that walks a new user through the set-up process.

AntiPodes had two new music server products at RMAF, the Music Server ($,300 to $2500) and the Media Vault ($2200). The music server is a fanless stand-alone digital audio transport system with USB output, while the Media Vault is a streaming and ripping device that supports AppleTalk, Bonjour, NFS, DLNA, and SMB sharing.

Plinius Tiki Network Audio Player ($4775) has more than just a groovy name, it’s a DNLA-compatible digital audio renderer with Ethernet connectivity. This wired device has both single-ended and balanced analog outputs and a single Ethernet input. It supports up to 192/24 files, and FLAC and AIFF formats. An iPod controller app is available.

Teresonic and Baetis used Baetis’ new Media Server ($3000), which provides bit-streaming of all major audio file formats without DSP. This includes WAV, ALAC, FLAC, and HDCD. The server is based around an Intel iCore Sandy Bridge processor with integrated audio circuitry, and jRiver Media Center.

Besides supplying the front end for Ray Kimber’s always-impressive demo on the main floor, Meitner Audio introduced its new MA-2 integrated playback system ($11,000). It incorporates a slot-loaded transport with a DAC that supports up to 192 PCM as well as DSD formats. Inputs for USB, AES/EBU, TosLink, and S/PDIF, as well as both single-ended and balanced outputs, make for a complete and very flexible digital playback device.

Playback Designs’ MPS-5 CD/SACD/DAC ($17,000) was making beautiful music in The Sound Environment room. The MPS-5 will even play 2x (5.6MHz) DSD files. With five digital inputs and three sets of analog outputs, the MPS-5 should be able to handle even the most elaborate digital music system.

Prima Luna’s Prologue Premium CD player ($3999) has the world’s first tube-based data-clocking device, the SuperTubeClock. It also has a USB input that employs M2Tech’s USB methodology, making the Prima Luna a unique and mellifluous combination of digital and tube technology. 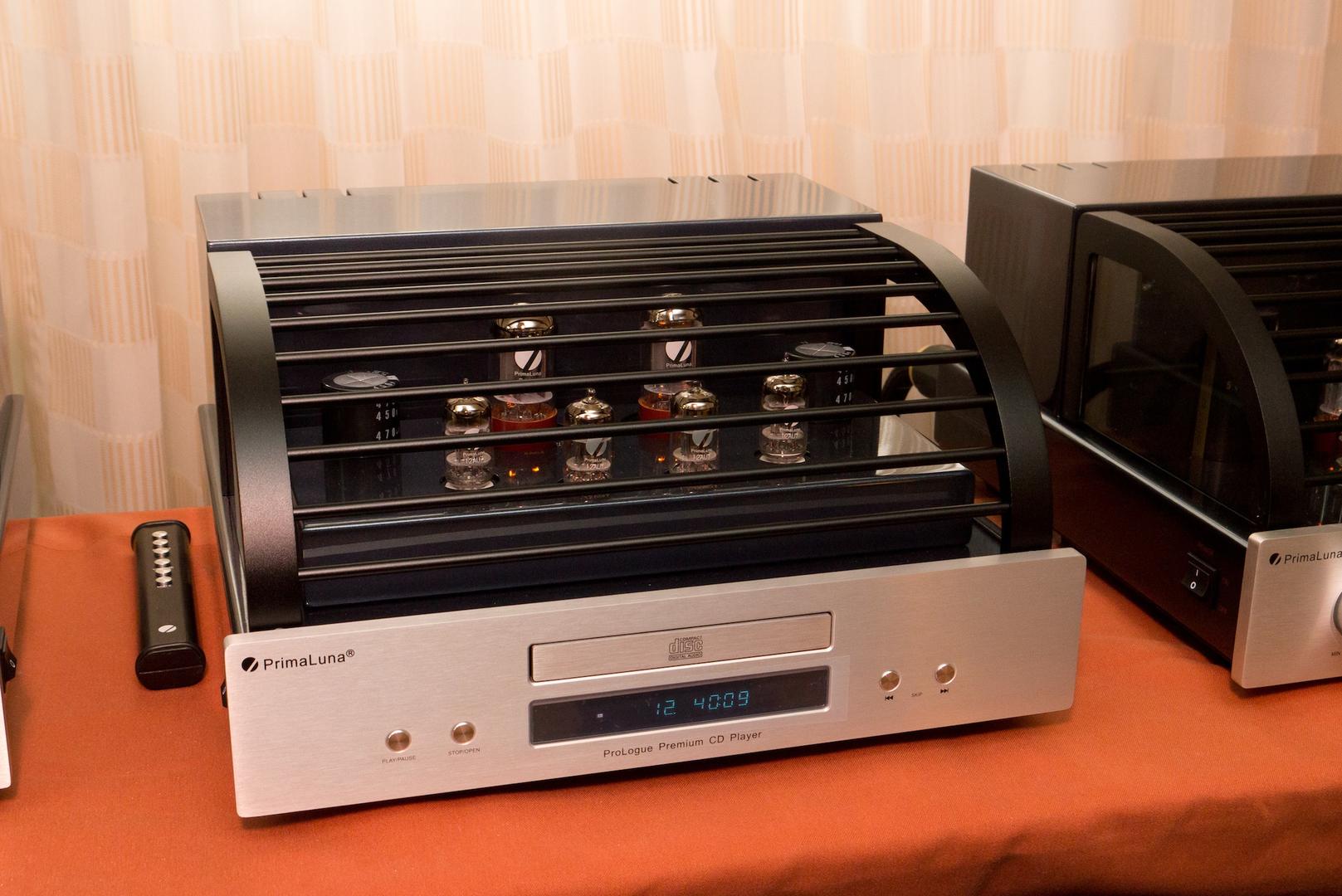 If a tricked out Mac is more to your liking, Mojo Audio demonstrated its Universal Media Server ($1000–$2200). It starts with a user-supplied Mac Mini, which Mojo Audio optimizes for audio by installing an external power supply and configuring it for dedicated music playback using Audirvana. Mojo offers a free OS X Mountain Lion optimization guide at www.mojoaudiofiles.wordpress.com.

Larry Diaz’s High End Palace had its own unique proprietary computer audio solution in the Nirvana Ref Playback Computer System ($8500 to $50,000). Custom-built from the ground up to each customer’s specifications, the Nirvana price includes extensive in-home setup and training.

Australia’s DEQX used its new DEQX Mate processor ($4500) to demonstrate how much better a speaker can sound when it’s been properly time-aligned. Using a pair of Gallo Ref 3s as well as a pair of truly mediocre horn-based PA speakers, DEQX dramatically improved the imaging and detail of the already excellent Gallos, and turned the PA speakers from a sow’s ear into at least a good polyester purse.

The M2Tech Joplin 384kHz/32-bit ADC ($2495) was designed to work with any of their 384-capable products including the E-Young DAC, E-Vaughn DAC and Palmer Power supply. With sixteen EQ curves, plus anti-rumble and anti-hiss filters built-in, the Joplin is designed to make digital files from LPs sound as close as technologically possible to the original sources.

Once again, the VTL/Wilson/DCS/Transparent Audio Room on the second floor (2030) garners my vote for best sound at the show. It was my first time hearing the Wilson Alexia speakers and I was more than slightly gobsmacked by the system’s ease and power. Comparing Peter McGrath’s recording of Gershwin’s Rhapsody in Blue with my own recording over the system was a revelation. I’ve never heard a more revealing, yet still musical, system. The reproduction chain seemed virtually non-existent as we compared microphone placements and listening perspectives of the two recordings.

This year the new Emerald Physics CS 2.P ($3000 to $3600) combined with Emerald’s EP100.2SE digital amp ($2200), DAC2 ($299), DSP2.4 digital crossover ($850), and Peachtree Audio Nova DAC/Pre ($1119) gets my vote for best high-value system. The cable was from Spatial, its Quantum Field wire ($500 for an eight-foot pair). Total system price without cable was only $6200. I was impressed not only by the system’s speed and detail, but also by its ability to convey the weight and power of an entire orchestra—all without exciting any pernicious room resonances.

The inclusion of DSD capabilities in several new DACs from prosumer companies such as Benchmark, MyTek, and Lynx (soon to be included in the Hilo). Whether DSD capability will lead to a rash of DSD offerings from any of the major labels is doubtful. But smaller labels, such as Blue Coast Music, already have quite a few DSD offerings in their catalogs. And anyone who uses a Korg or Tascam DSD recorder will now have a way to play back their music files natively on something other than the machine that made them. For next year’s RMAF I’ll bring some DSD music files since by then we should see even more DACs with DSD capability.

Benchmark’s DAC1 was the product that made it OK, and perhaps even cool, for audiophiles to use gear from the pro-audio side. Its new DAC2 HGC ($1995) raises the bar by including Asynchronous USB 2.0 and DSD support, as well as several proprietary new technologies including a hybrid gain-control circuit, higher headroom DSP, UltraLock jitter-attenuation system, quad 32-bit balanced D/A conversion, and distributed power regulation.