Everyone loves a cliffhanger. And as I flew into Denver for RMAF’s latest installment I was about to find out how this one was going to shake out. Specifically, the change of venue, and the transposition of show dates from mid-October to early September (this year only), elements that are fraught with all kinds of risks—and potential rewards. The brand-spanking-new venue, the Gaylord Rockies Resort and Convention Center, certainly provided a distinct adjustment from the homey if increasingly ramshackle Denver Tech Center. A stone’s throw from the airport, the mammoth, full-featured, and convention-friendly Gaylord hit me like “Las Vegas in the Rockies” minus the smoking and gambling. The speedy elevators made up for the fact that most of the exhibit rooms were spread over eight floors of the tower section. Ballrooms and halls however were at the opposite and verydistant end of the hotel. Exhibitors seemed pleased with the sound (and the WiFi) while I found rooms less boomy than those at the old DTC, and more supportive of authentic low frequencies. And since the hotel is built more robustly and exhibitor rooms were rarely placed next to each other, there was little bleed-through during demonstrations. While I cannot vouch that this reboot broke any attendance records, the exhibitors were enthusiastic about the traffic they were seeing. Many expressed trepidation at the outset—Gaylord room rates ain’t cheap—but the quality of buyer reportedly coming through the door seemed to have brightened the mood by show’s end. Indeed, though it might be too early to proclaim “mission accomplished,” clearly a potential disaster was averted. Though its future is still a cliffhanger, I’m betting that RMAF should live to fight another day. October 2020 will tell the tale. My beat this year was loudspeakers. Here’s my take. Pricing is per pair.

The WAMM a little too rich for your blood? May I suggest Wilson’s new Chronosonic XVX at a cool $329,000 (subwoofer optional, $37,500 each). Designed by Daryl Wilson, who was personally on hand to take the wraps off this “simpler” WAMM, the XVX should comfortably fill the wide gap between XLF and DAW’s masterpiece. Displayed but not demoed, the latest Wilson is shorter at 6’4″ but cuts a similar heroic profile. The woofers have been adapted from the WAMM, but much is new including the in-house designed and manufactured crossover capacitors, the 7″ Alnico midrange driver, carbon-fiber crossover enclosure, the nifty connecting spades/binding posts and LED lighting for rear-panel ministrations. Naturally, the tweeter and midrange modules are infinitely adjustable for time domain accuracy. Its 90dB sensitivity is just slightly less than the XLF’s. Simply, a stunner. 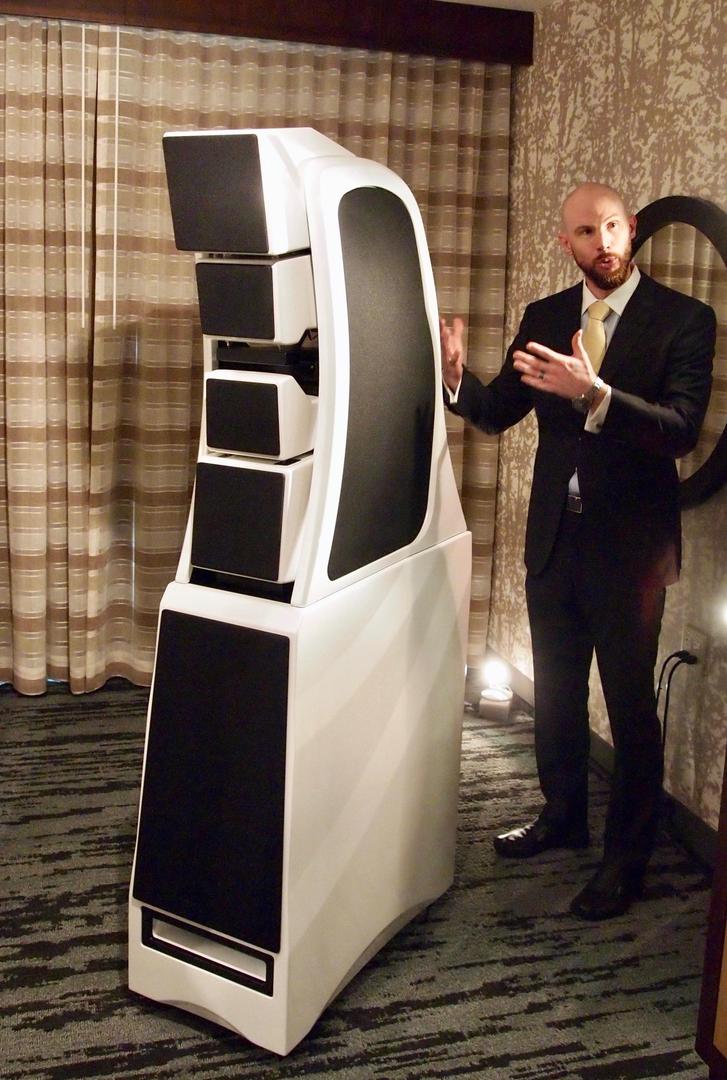 Vandersteen’s formidable 5A Carbon is not an easy to act to follow but to these ears, its successor, the four-way, 47″- tall Kento Carbon ($37,500) has done it with performance that just flat-out sings. Beyond the refreshed, handsome cosmetics, there are now dual 9” side-firing subwoofers and 400W linear amps plus a high-pass filter that’s adjustable up to 200Hz for more flexible room placement. In demonstration with AMG, Aurender, VTL phono and pre, Vandersteen monoblocks, AudioQuest cables, and HRS stands the Kento Carbon featured brilliant orchestral dynamics, a swing-for-the-fences musicality, and bass response that’s rich, pitch-precise, weighty but not plodding. Its sense of balance, authority, and tonal realism was breathtaking and among the best in the show. 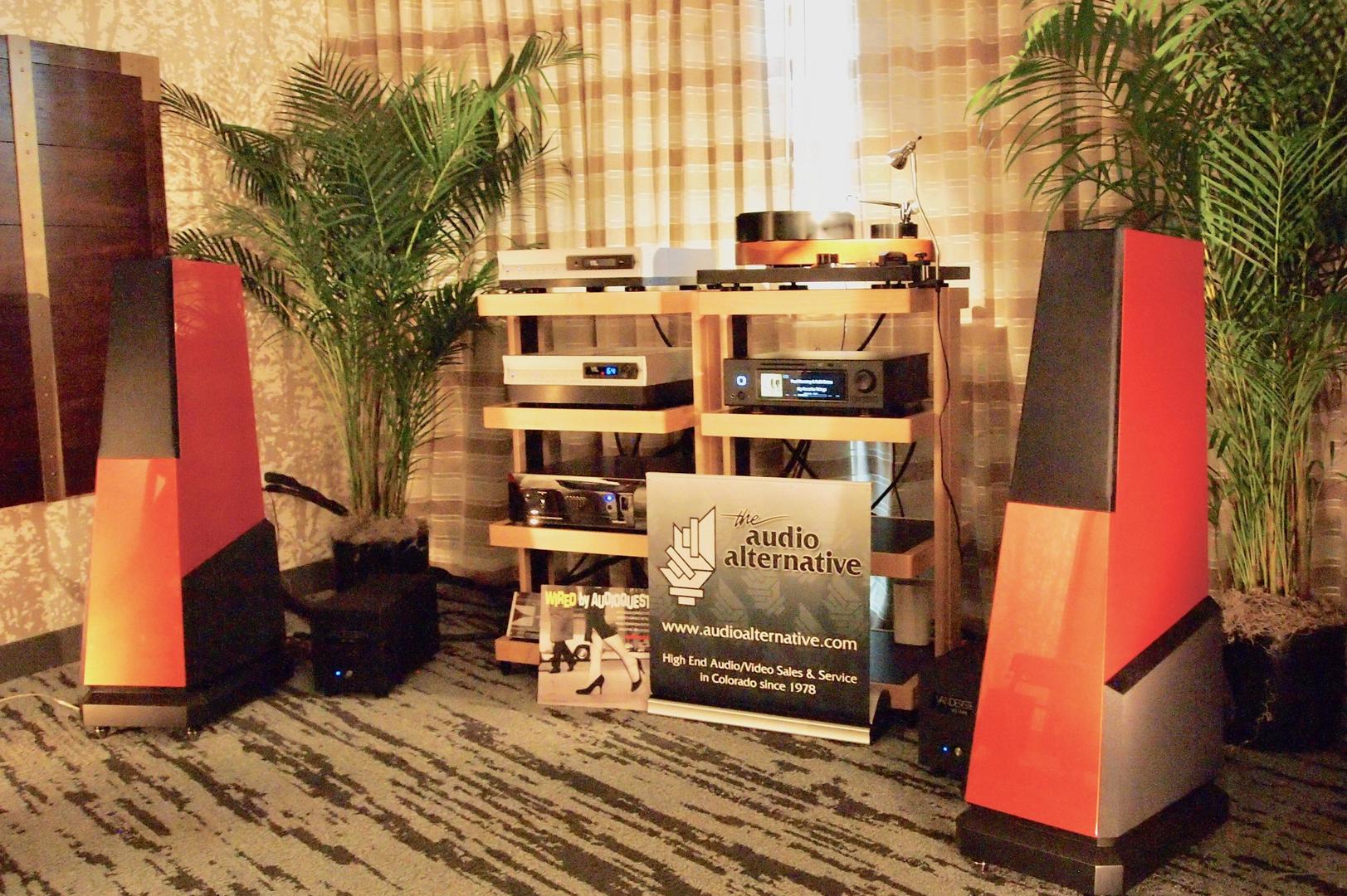 The newly introduced Revel F226Be ($7000) stakes out the much-needed middle ground in the Performa Be lineup. Filling the gap between the M126Be compact and the broad-shouldered F228Be floorstander the 41” tall, three-way, bass-reflex design sports the line’s beryllium tweeter in a new generation waveguide. Driven by Mark Levinson electronics and sources, its sonics were vigorous and upfront as Revel products tend to be. Never wallflowers, the speakers reproduced vocals articulately and honestly, though did so on the cooler side. Revel bass response was lighter and less extended than in the F228 but was fast and controlled. 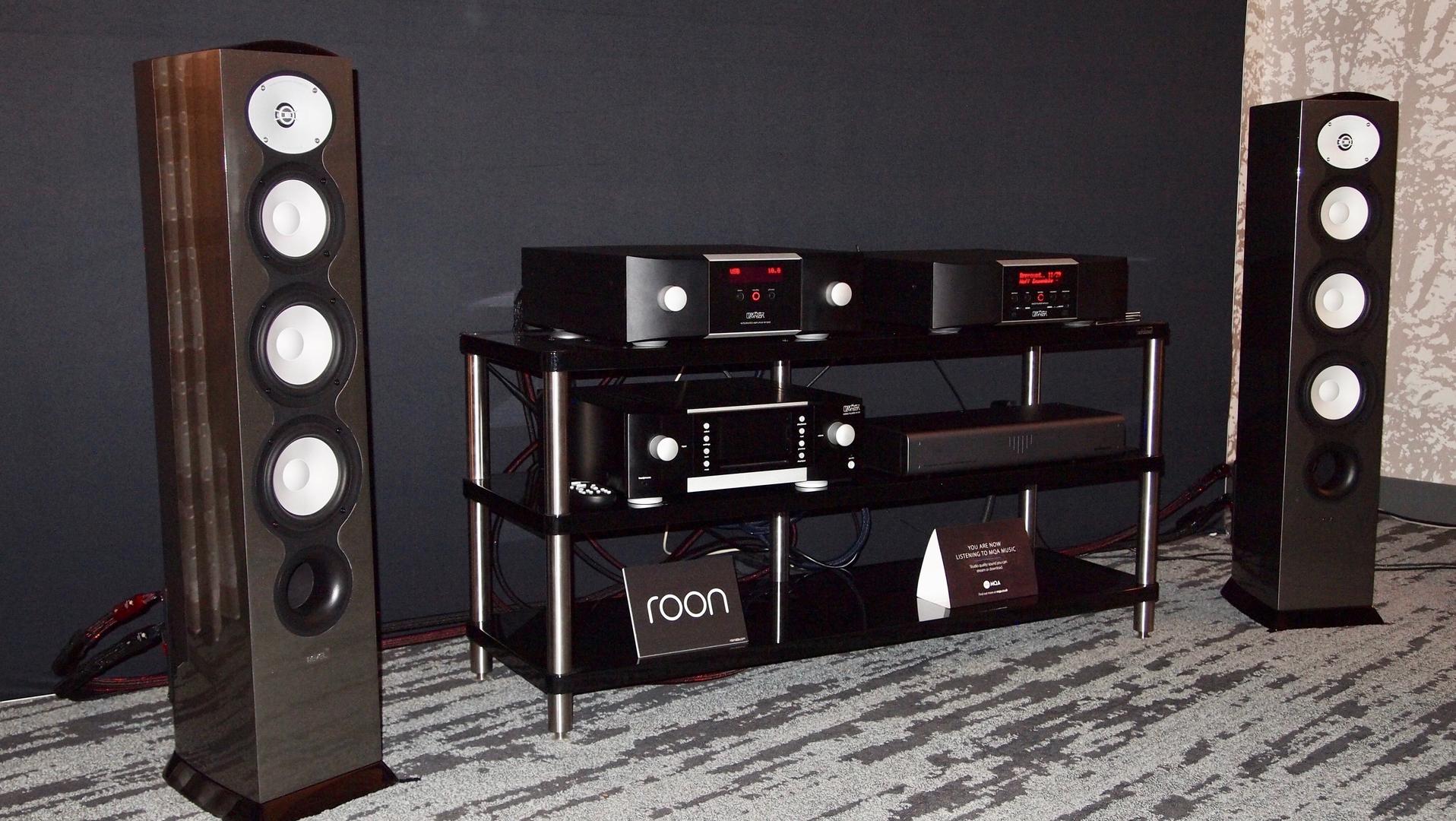 The peripatetic Elac team have yet anothernew compact loudspeaker. Based on the entry-level Debut series, Debut Reference features a modified tweeter, a woofer that has received an aluminum-cast basket in place of stamped steel, a more sophisticated crossover, and revised front venting. Once again the sound was formidable, with a wall of midrange detail that takes the lead, joined by a smoother top-end and a superior bass response. Overall an effortlessly listenable quality that few speakers in this segment can manage. Available in two snazzy finishes, oak with satin white accent and walnut with satin black. Partnered with the Elac Discovery DS-A 101 WiFi streaming 40Wpc integrated amp ($750), this was high-value performance at its best. 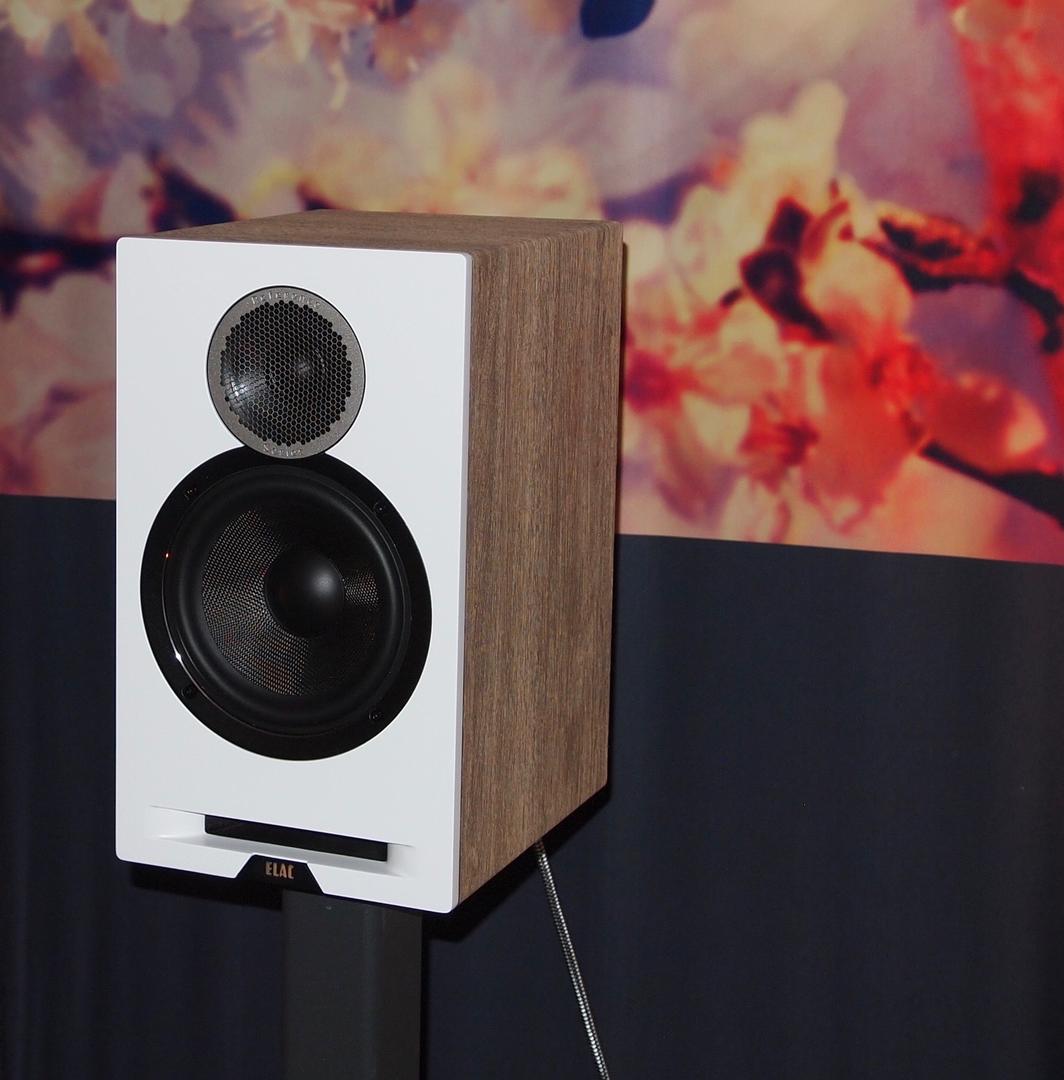 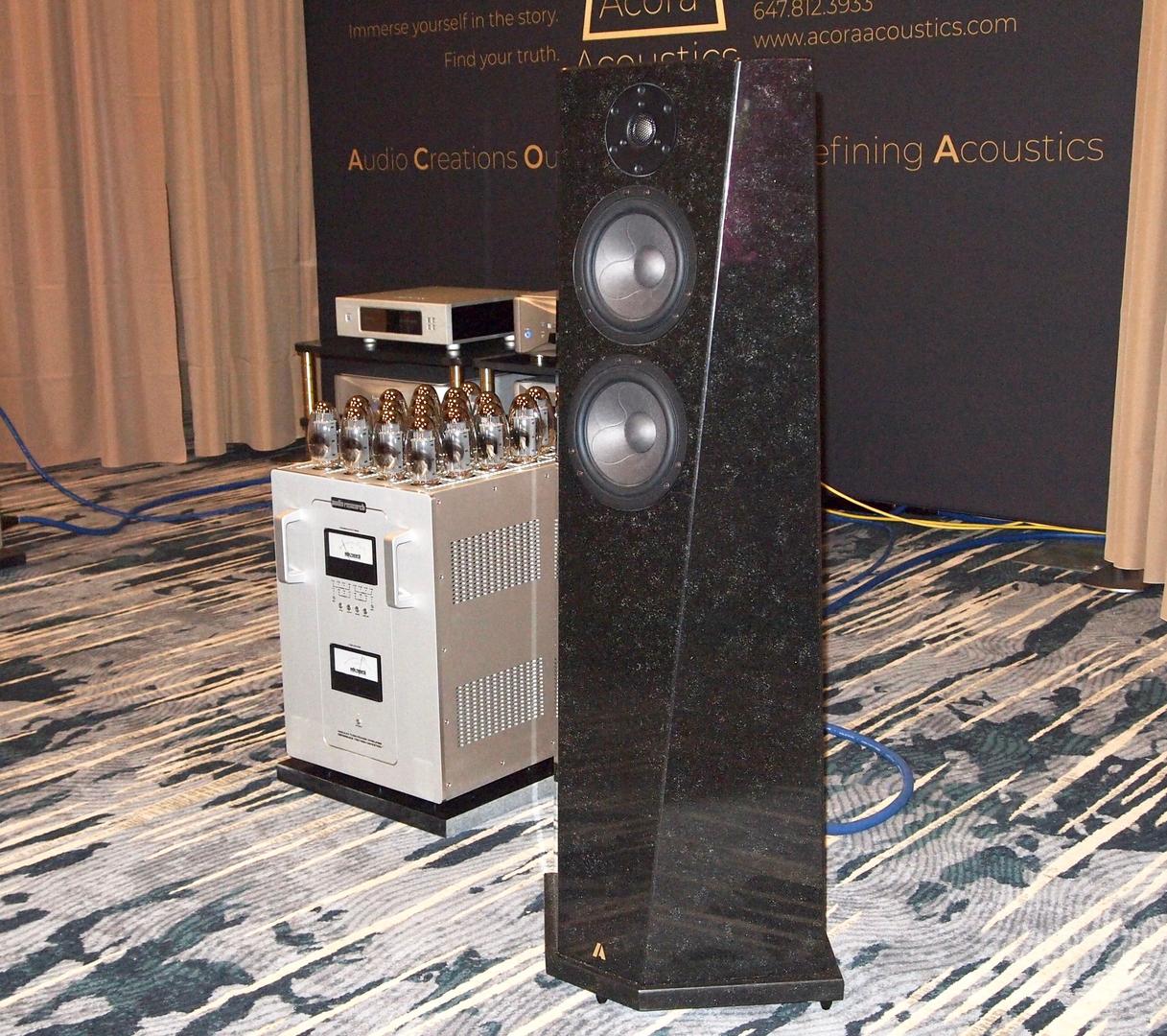 The first loudspeaker from the much-anticipated Arnie Nudell-inspired series, the AN3 is 51″ tall, a four-way hybrid with rear-firing tweeter, double magnetic-gap woofer, coaxial AMT tweeter and planar-magnetic midrange, plus dual 300W active mid/bass drivers and 12” active sub driven by 700-watt ICE module power. I heard full-range speaker “attitude” with near-limitless vocal eloquence, tonal color, and dynamism—and extreme lack of cabinet noise. The top end was hair-trigger quick and without coloration. Later next year comes the larger AN2 and the massive AN1, 7.5-foot towers! Price: TBD (likely in the range of $15–20k) 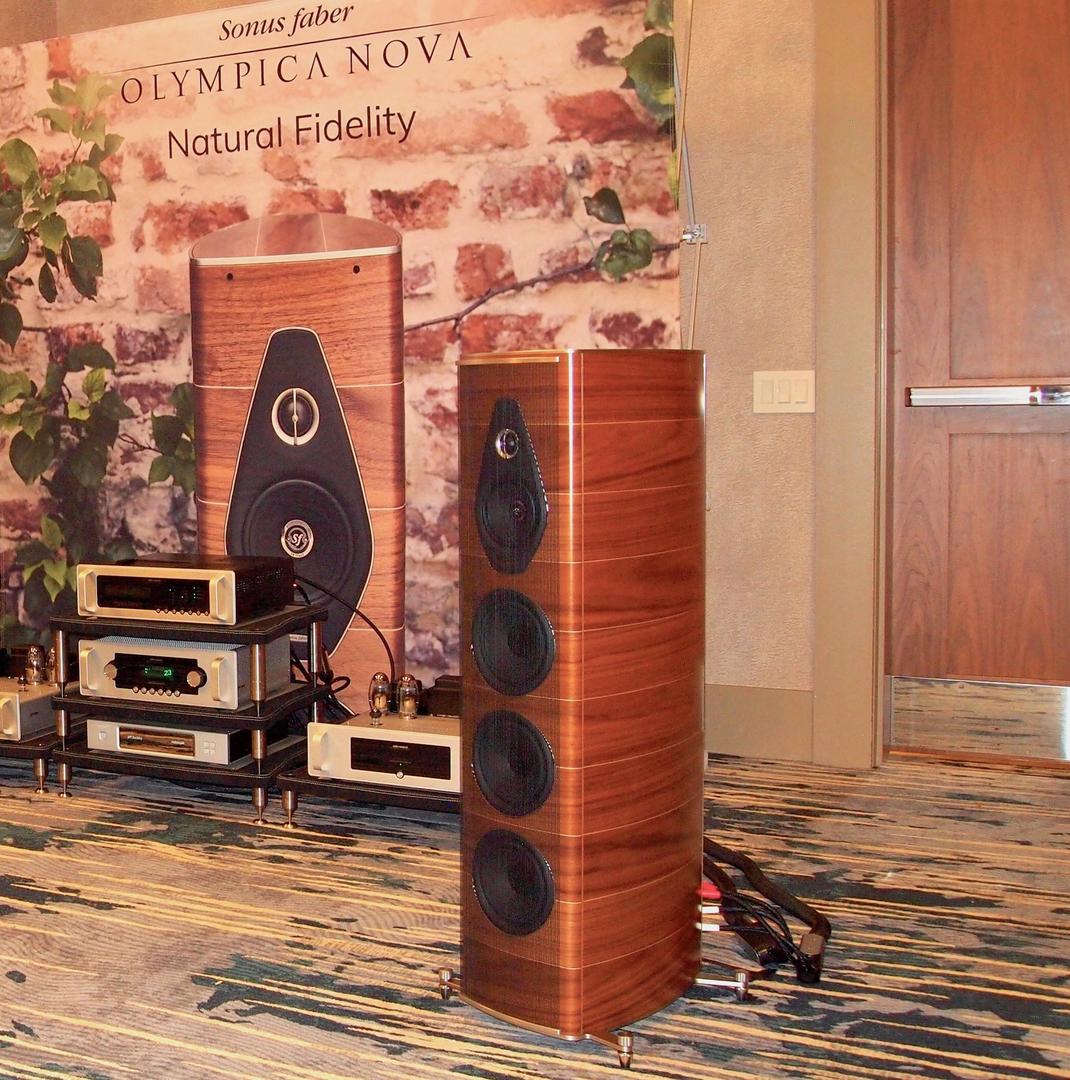 Nova retains much of what made Sonus faber’s Olympica a feast for the eyes including the sensual asymmetric shapes, but internal tweaks have made the series evermore musical. Improvements to cabinet rigidity are reflected in revised venting, new aluminum top and bottom caps, a new stiff laminate frame, plus refreshed drivers and crossovers. Prices for the new series models range from $6500 for the Nova 1 stand-mount to $16,500 for the Nova 5 flagship floorstander. Driven by an Aurender source, ARC Reference gear through Shunyata Research cabling, the triple-woofered Nova 5 threw a huge orchestral soundstage during the Saint-Saens’ Danse Macabre. It reproduced brass and wind air and dynamics with brio. Wonderful clarity and extension. Some stridency crept in on top but given the sheer volume of the ballroom it was trying to fill, understandable. 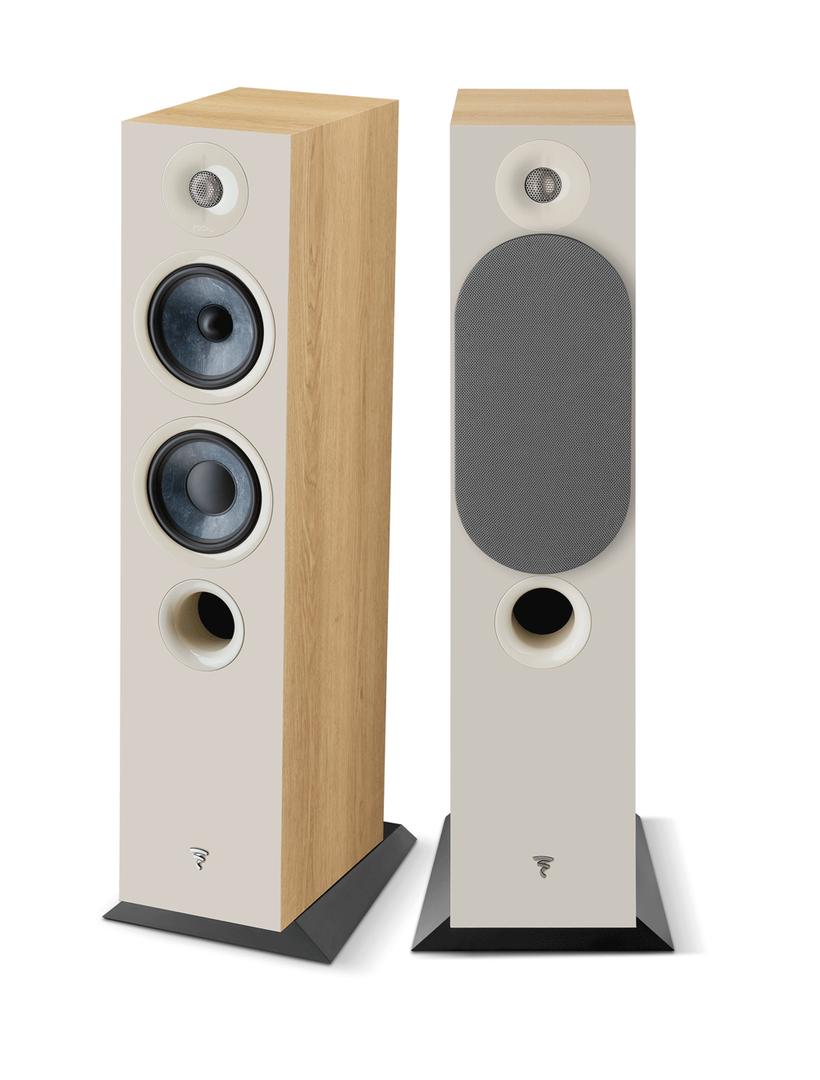 The successor to Chorus, Chora is an aggressively priced, six-speaker line built around Focal’s newly developed Slatefiber cone material. The “slate-effect” diaphragm is thanks to thermoplastic polymer, with non-woven recycled carbon fibers achieving damping rigidity and lightness beyond what Focal has achieved before at these points. Chora consists of the three-way Chora 826 ($2000), the two-and-a-half-way 816 floorstander ($1600), and the 806 compact ($900). All bass-reflex designs, in addition to the Slatefiber speaker drivers, these models integrate a TNF aluminum/magnesium tweeter—another Focal signature. On static display for this show, the speakers’ fit and finish appeared excellent. Available in black, and light and dark wood finishes. The line will expand further in 2020. 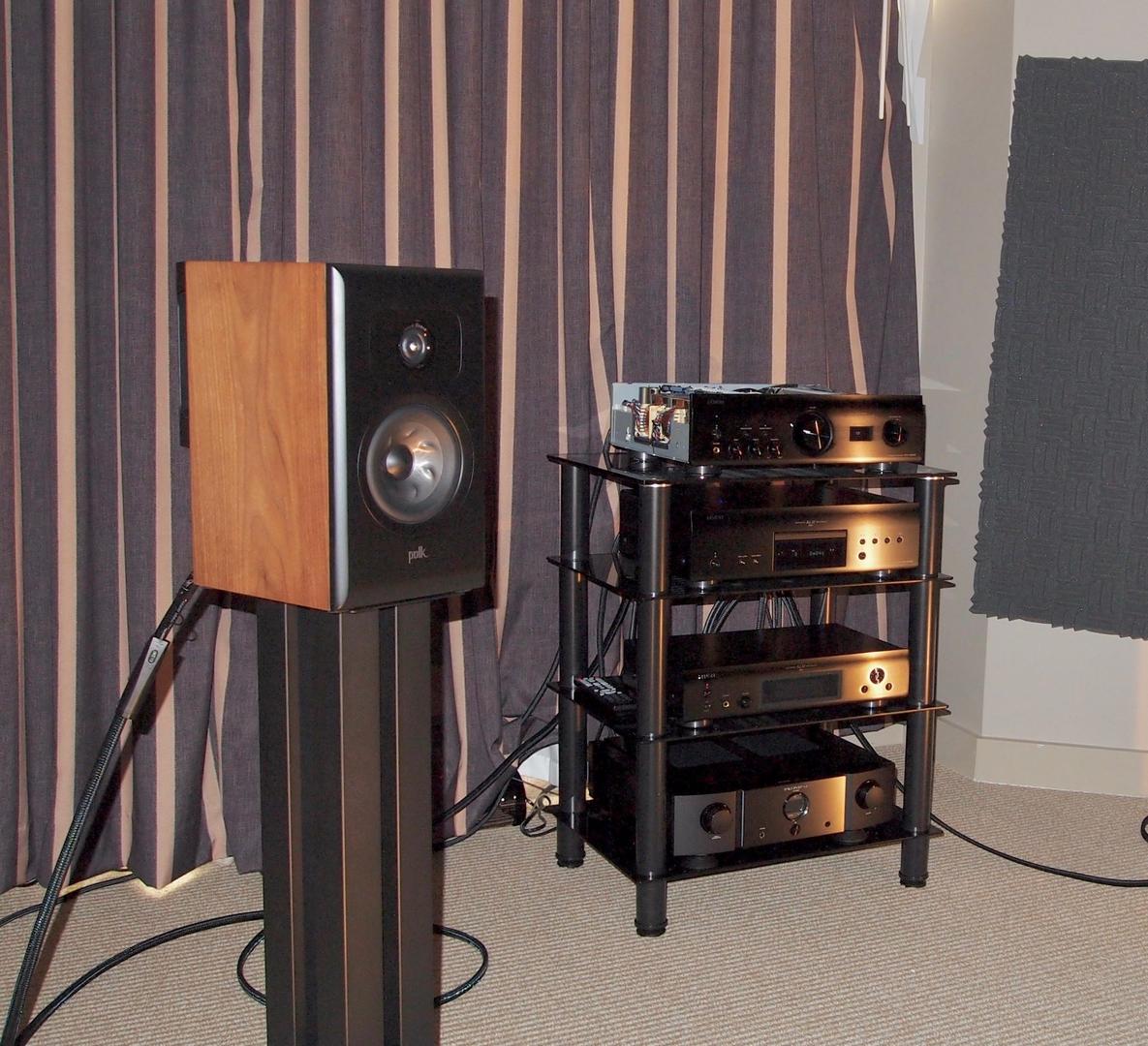 Polk’s new Legend series is made up of six models ranging between $1199 for the L100 mini-monitor ($1199) to the L800 ($5998).For the company’s flagship line, engineers improved upon nearly every aspect of the speaker, including the tweeter, mid/bass driver, woofers, bass port, stereo dimensional array, cabinet design, and crossover network.The full-range, three-way L800 employs the latest iteration of Polk’s Stereo Dimensional Array technology or SDA, a technology that reduces interaural crosstalk (IAC) by employing a “Head Shadow” filter in a dimensional array. Across a variety of demo’d source material the soundstaging was spacious, and imaging was highly focused and unsmeared. Special kudos to the dynamic and high-energy output from the two-way L100 compact too.

It was a blissful first encounter with the YG Acoustics Sonja 2.3 ($112,800). Driven by VTL flagship electronics including Siegfried Series II monoblocks, dCS Rossini player, and Nordost cabling, this superbly integrated system produced a deep well of ambience from the center stage and projected outward into the large room. The sheer height of the speaker also produced music on a grand scale that especially complemented orchestral layering and larger groupings of musicians. Close-miked solo images tended to balloon in scale accordingly too, but tailoring the volume down a bit returns a natural perspective that’s almost eerie in its holography.

Audio Solutions put on quite a show with the bold and brawny footprint of the Virtuoso M floorstander ($32,000). The three-way, four-driver system was paired with the new Vitus Audio SIA-30 (30Wpc Class A/200Wpc Class AB), United Home Audio R2R tape deck, and Ansuz Acoustics cables. Listening to an assortment of Brubeck, Prince, Stevie Ray, the large-scale sonics combined a richly textured midrange, solid imaging and soundstaging with great low-end slam. There was a hint of treble shading but that was likely due to the enormity of the ballroom.  And what would an audio show be without a full-range ultra-premium planar-magnetic? Fitting the bill was Spain’s AlsyVox Botticelli ($89k, add $25k for outboard crossover). In spite of the ballroom’s immensity, the six-footer produced classic planar characteristics: luminous highs and light-speed transient attacks during Paul Simon’s “You Can Call Me Al” and a very vibrant and well-constructed mid-bass during the hurtling electric bass solo of Bakithi Kumalo. Rated at 94dB sensitivity and driven by 100Wpc of Omega Audio Concepts power. 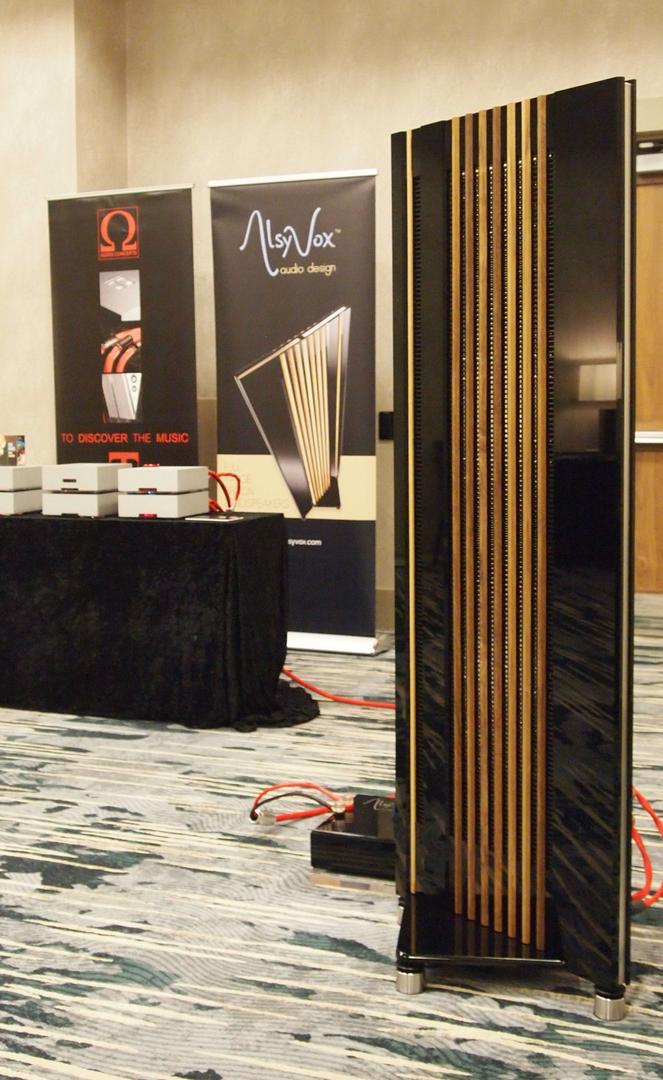 This was my first listen to the Joseph Audio Pearl 3 20/20 Graphene ($37,995), pictured below, aided by the smooth, svelte sonics of Doshi Audio V3 electronics and monoblocks, Berkeley Audio Design digital, J. Sikora turntable, and Cardas cabling. The three-way Pearl 20/20 Graphene includes a newly designed magnesium cone midrange with a graphene coating. The crossover has also been upgraded and optimized around this state-of-the-art driver. The midrange has an entirely new motor system with larger magnets and a new suspension. Sonically this was high-end sound without artifice, of superb wide-range musicality and harmonic richness. With a playlist selection that included a bit of Massenet, female vocals, a Spanish guitar bass and percussion tracks, the system will certainly breathe better in a larger room but the balance of imaging specificity and soundspace delivery coupled with true symphonic tonal balance made this demo top-notch. Beautifully weighted in the upper bass and lower mids with control and grip. 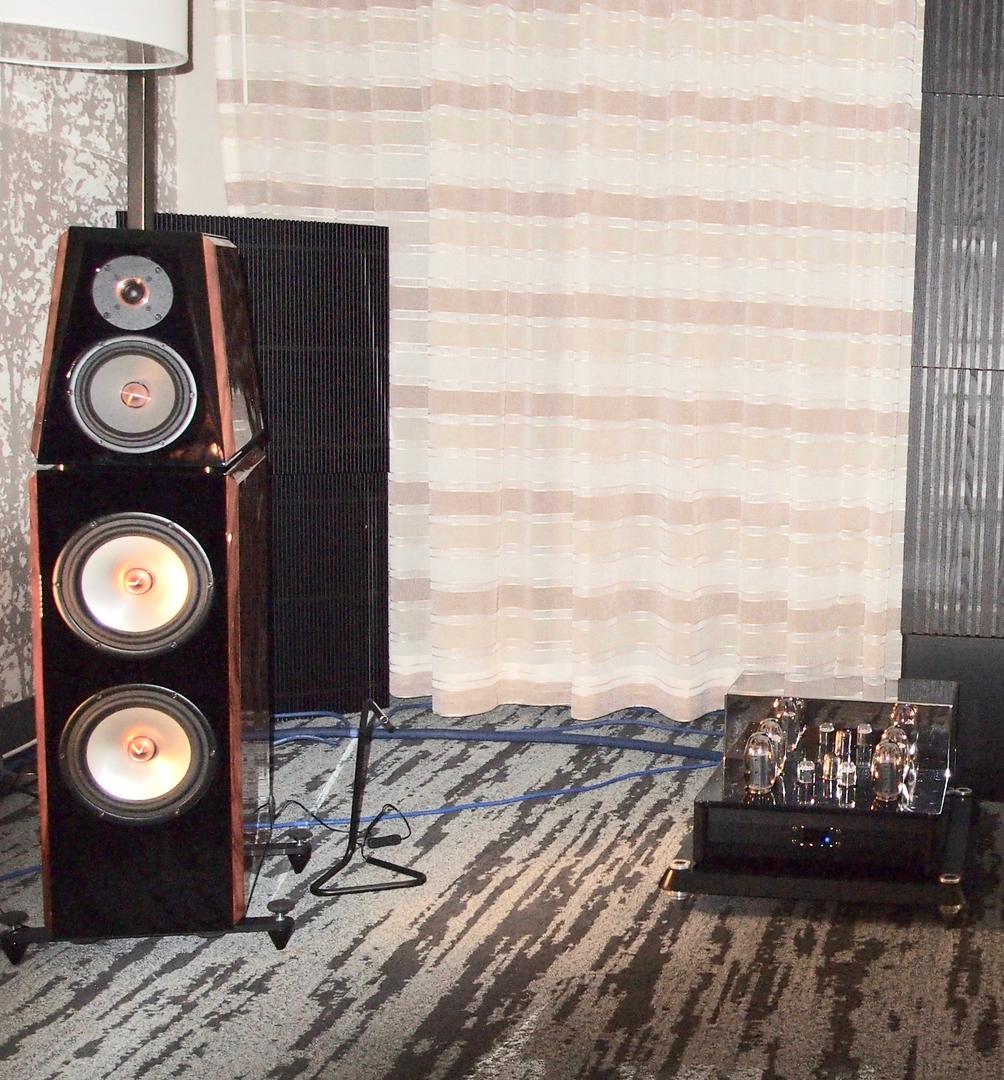 Spendor upgraded its D Series to D.2 status with some cosmetic changes such as new magnetic grilles but more significantly it’s the internal tweaks that really made the difference. Spendor added some extra bracing for reduced resonances and modified the drivers to reflect the changes in cabinet response. The result was a warmer signature, more harmonic bloom, and treble openness. Prices for the D7.2 and D9.2 floostanders are $6795 and $11,495 respectively. Fyne Audio, which was launched about four years ago by a group of ex-Tannoy employees, displayed speaker lines that spanned the high-value gamut from the two-way 300 Series mini-monitors to floorstanders beginning at $300. Tannoy-like coaxial drivers are used throughout the 500 Series and upscale 700 Series with compacts beginning at $425 and $895. Floorstanders like the F1 Series flagships include Fyne’s unique bass-diffuser system as well. Built in Scotland. 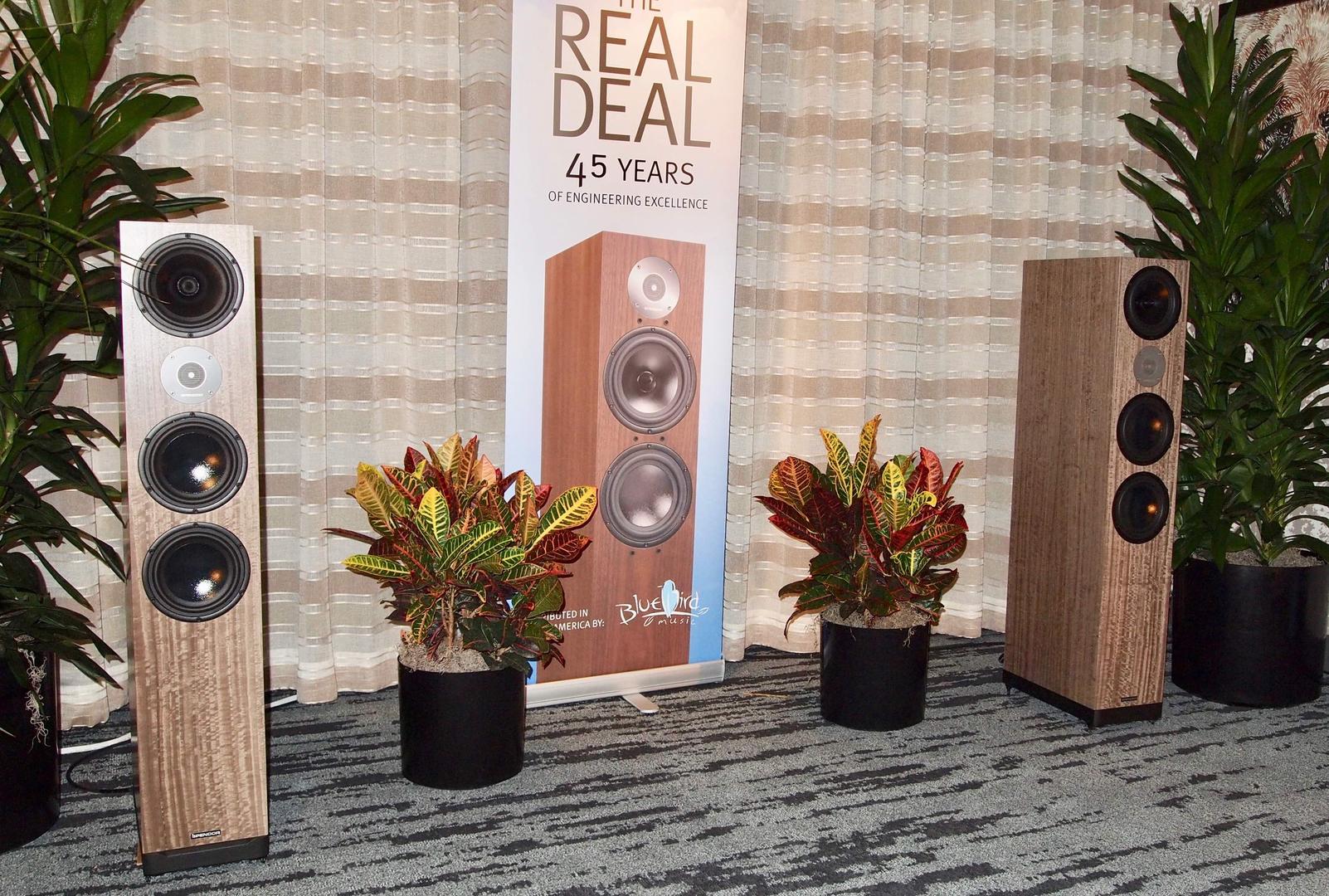 Wilson Audio Chronosonic XVX. Like father, like son. Doing his father proud, Daryl Wilson follows DAW’s lifetime masterpiece with a statement of his own.

Welcome to the new and ever-expanding Roon-iverse.

I could have gone Vandersteen, Wilson, or YG but my heart kept returning to the Joseph Pearl 3 with Berkeley Audio Design sourcing Doshi Audio power. Even in a smallish room the sound was effortless, and brimming with musicality and warmth. Take my money, please.

When you take a show from a hotel that’s been […]