Year Twelve of the annual Rocky Mountain Audio Fest was to be my first ever visit to this thriving, exciting show in the “Mile High” city. Held in the sprawling Marriott Tech Center in the Greenwood Village area of Denver, I found the 2015 event to be much bigger than I had anticipated. Unlike the annual industry-based Consumer Electronics Show held in Las Vegas every January, the “Fest” is open to the public.

With over 160 exhibit spaces, and representing more than 400 hundred companies from North and South America, Europe, Australia, and Asia, short of the aforementioned CES, this is the largest U.S. show I’ve had the pleasure of attending. While there is no question that covering such a show with the intent of producing a report is serious work, I also had more fun at this event than any other I can recall in perhaps the past decade. If you’re inclined to be in Denver in the fall, this just may the show for you! 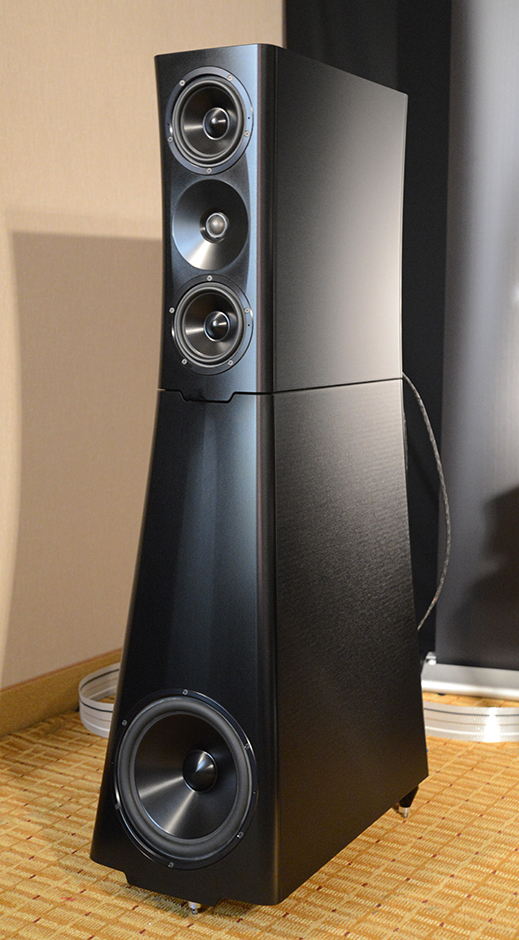 When playing LPs like 88 Basie Street or the cut “Spinning Wheel,” from the Blood, Sweat, & Tears remaster, the Sonjas offered superb texture and detail, all infused with an undeniable sense of body, bloom, and space. They simply breathed music with a sense of ease and lucidity, effortlessly casting their spell on me, allowing me to completely forget I was listening to an electro-mechanical system and to just disappear into the music. While the Sonja 1.2 may not be the last word in deep bass extension (can you say Sonja 1.3), and the set-up choice in this large room left center images slightly diffuse, the exhibit was, to my ears, the most unfailingly musical presentation at this event. 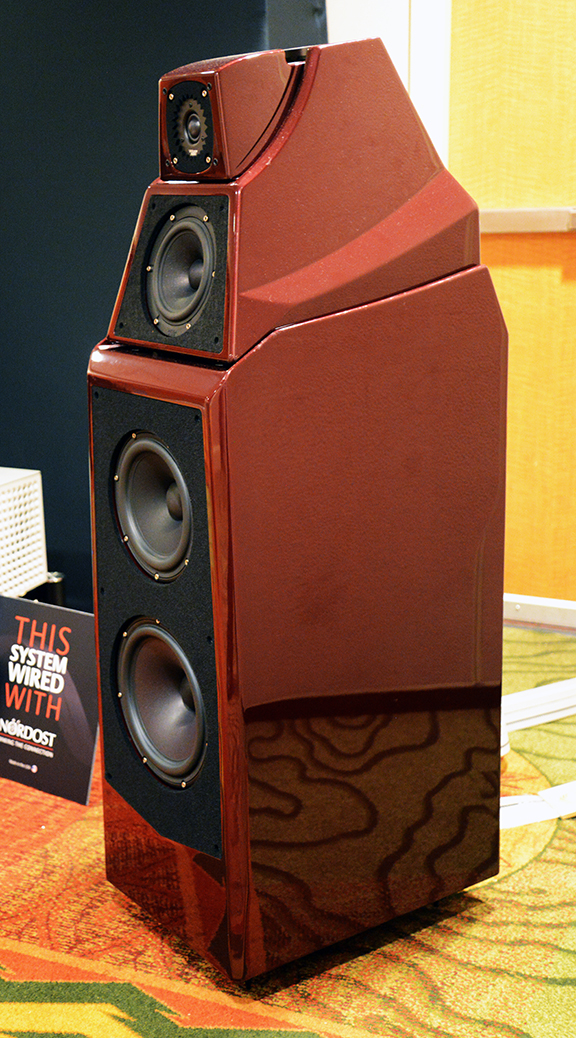 Wilson Alexia
Several rooms were showing the Wilson Alexia ($52,000/pr.). In the Audio Alternative hosted room on the 9th floor, either a Brinkmann Balance Turntable ($23,700), with the Brinkmann 12.1” ’arm ($7500), and Lyra Atlas MC cartridge ($9500), or the dCS Vivaldi CD/SACD transport ($39,000) with the dCS Vivaldi DAC ($34,999) serving as sources. Electronics were all Dan D’Agostino’s Momentum gear, the Preamp ($34,500) and Mono amplifiers ($60,000/pr.) ran the Alexias, with the Classic Stereo amp driving the pair of Wilson Watchdog Subs ($9500/ea.). Cabling was AudioQuest throughout, and everything rested on Harmonic Resolution Systems isolation stands and bases. The Wilsons’ dynamic expression, amazing neutrality, and unflappable effortlessness were very hard to resist. 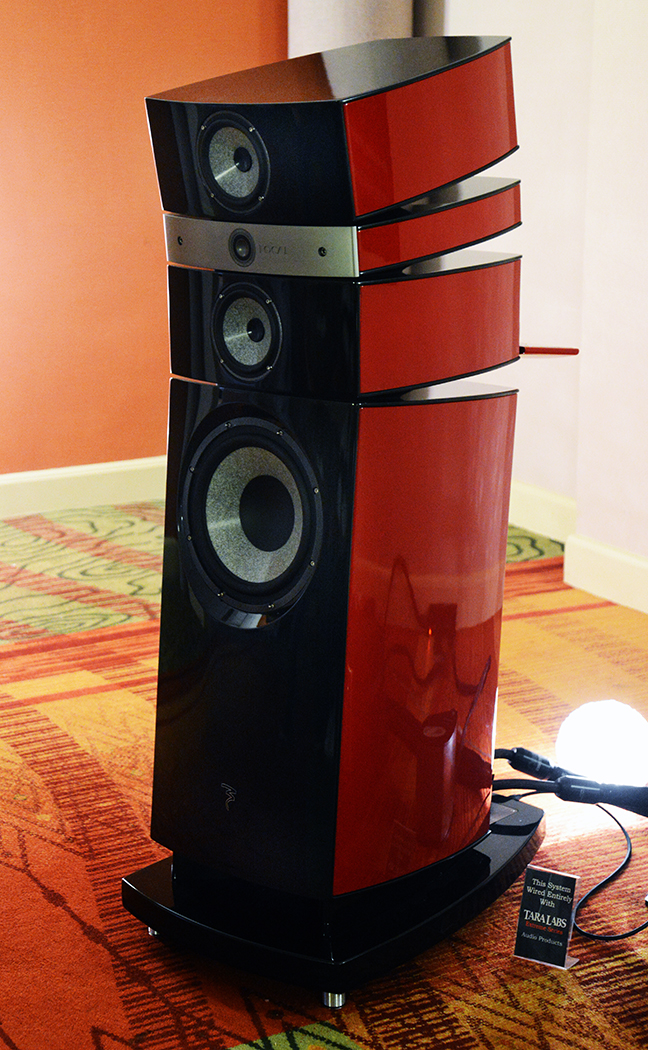 Driven by over $500,000 worth of Soulution, Accuphase, and Air Tight electronics and sources, using all Tara Labs cabling, resting on Critical Mass stands and footers in the Blanca Peak room, this speaker literally spoke to me. Its ability to render fine detail and micro-dynamics made it engagingly musical. With an unrestricted sense of air and space, offering uncanny dimensional accuracy, scintillating tonal color and texture, these gorgeous speakers were breathtakingly fast and dynamic. 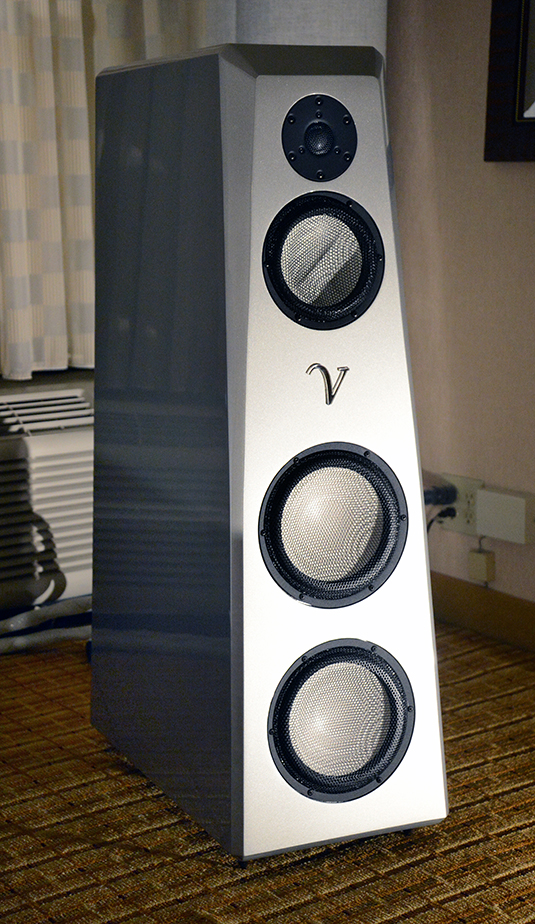 The YFS Ref 3 music server ($13,500) or YFS DT-100 transport ($2000) fed the EMM Labs DAC2x ($15,500), while the Constellation Virgo 2 preamplifier ($29,000) and Centaur amplifier ($27,000) completed the electronics; wiring throughout was with MasterBuilt cables. The result was blisteringly fast transients, uncanny pitch definition, intrinsic correctness of tone, daunting resolve, incredible impact, a visceral, palpable midrange, and clear, crisp, and delicate, articulate treble. These speakers deliver the musical goods at a level of sonic performance well beyond what they have any right to offer at their price. 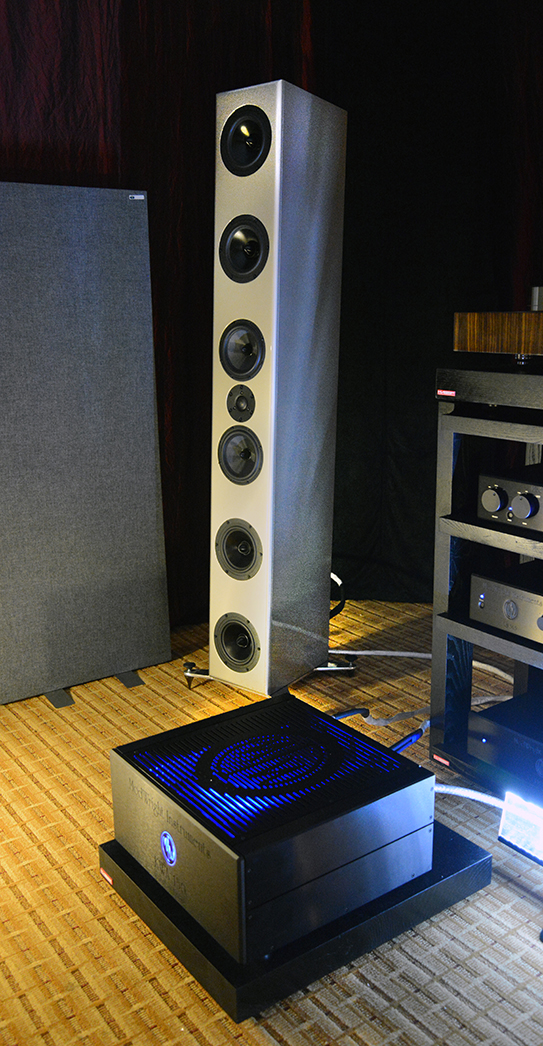 Endeavor Audio Engineering E5
The Endeavor E5 ($35,000/pr.) is a 7-driver, 3-way tower, using 4 seven-inch anodized aluminum woofers, 2 six-inch Kevlar midranges, and a Scan-Speak one-inch damped beryllium dome. This system, pared with Constellation electronics managed to leave me almost speechless at AXPONA last April. This year, the presentation got off to a rocky start Friday due to an amplifier mismatch.

Once paired with the equally overachieving ModWright KWA 150 SE solid-state amplifier, using all Skogrand Beethoven cabling, the Endeavor’s class-leading transparency, faithful timbre and pitch definition, transient capability, and outstanding imaging and soundstaging showed it to be the outstanding performer that it is. It was almost impossible to sit still in this room after the change brought the system to life. 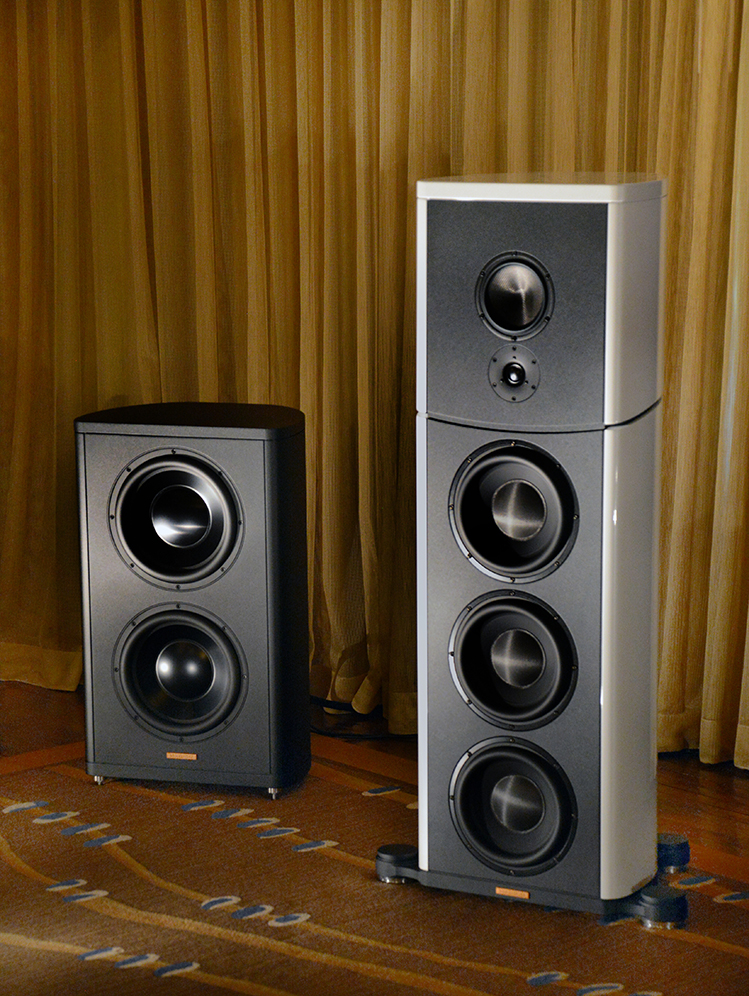 Leveraging lessons learned from M Project and some of the technology formerly too costly to use in any systems other than the Q series, namely the copper “O-ring” coupling system between the woofer drivers and the speaker cabinet, this speaker uses three 10″ aluminum cone woofers, a new 6″ Arkema Multi-Wall nanotube midrange, and Magico’s diamond coated 1″ beryllium tweeter. While listening on 11th floor Presidential Suite at the Hyatt Regency, I got to spend some time discussing their genesis with Alon Wolf.

At a cost of about one fourth of the flagship Magico Q7, sans the S SUBs, they are, in a word, stunning. Their transparency, accuracy, detail, extension, air, and purity of tone were captivating. Lighting up the new S SUBs, only served to multiply the spaciousness, air, and extension, affording an even more authentic sense of rhythm. They are much more reminiscent of the Q7 Mk II than their price tag represents. 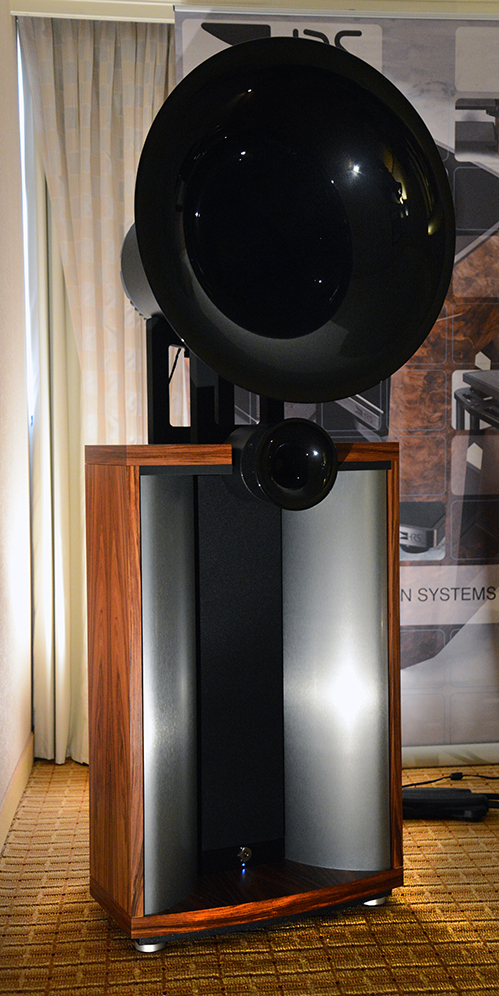 Using the Bergmann Audio Magne air-bearing turntable and ’arm ($20,000 in white finish), the Sutherland Argentum phonostage ($14,000), and the new Avantgarde Acoustics XD Series XA integrated amplifier ($18,800), with all Transparent Audio cabling and Harmonic Resolution Systems isolation stands and bases, this striking-looking speaker really sang, surprisingly so, given its size and the smallish room it was in. Saxophone tonality was intoxicating, rendered with an exquisite balance of brass and reed. And obviously, transient speed was exhilarating. 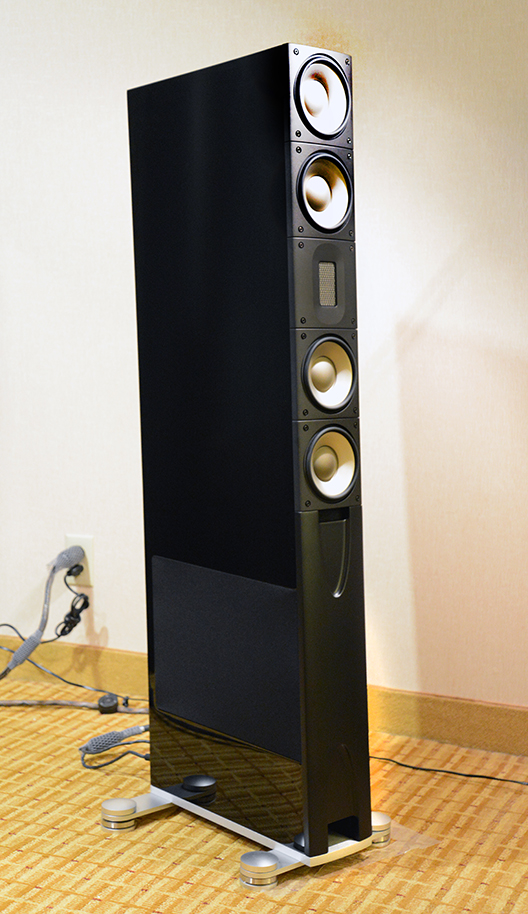 Raidho Acoustics XT-3
Raidho Acoustics introduced the XT-3 ($36,500), supplanting the very similar X-3 as the pinnacle of its entry-level X series of products. The difference denoted by the T moniker change is that the ceramic mid/bass drivers are treated with a finely deposited layer of Titanium.

Driven by the new Raidho Aavik U-300 integrated amplifier, which is a phonostage, DAC, preamp, and amplifier all in one, and using all Ansuz Acoustic cables, the XT-3 impressed me more that I would have expected. Lightening transients, near see-through transparency, and a tonal balance that was very hard to fault tells me Raidho has yet another hit on its hands.

Joseph Audio Pearl
The Joseph Audio Pearl3 ($31,500) looks similar to many speakers in its class, yet it consistently speaks to me with its tone, clarity, and vibrancy. This year was no exception when playing vinyl in Suite 1130 using the new VPI Industries Avenger “Magnetic Drive” table and a pair of twin 12.7″ Classic 4 ’arms, or the new JMW 12″ 3D printed ’arm (≈ $30,000). The primary cartridge was the Miyajima Laboratories Madake ($5995). The phonostage was the enchanting Dynamic Sounds Associates Phono II ($13,500), linestage duties were performed by the DSA Pre I, the Halo by Parasound JC-1 monos ($9000/pr.) provided power, and everything was cabled with Luminous Audio products.

The sound was warmly textured, immediate, and so tonally pure and honest, that I was simply drawn to the message of the music being played.

Classic Audio Speakers
John Wolff’s line of horn loudspeakers is named Classic, and for good reason. As at AXPONA in April, the Classic Audio T-1.5 ($72,950), a very large floorstander with front-firing and down-firing 15-inch woofers, a midrange with a 4-inch beryllium diaphragm, and a Fostex super tweeter, all using John’s field-coil technology, was on hand.

Showing with Ralph Karsten’s Atma-Sphere Novacron amps ($19,200/pr.), and the Purist Audio Design Neptune series of cables, there is no denying the synergy. I sat utterly rapt in Stevie Ray Vaughn’s guitar work, and simply have to marvel at the ability John’s speakers have to delve into and release music in one of the most dynamically and harmonically correct presentations you’ll hear. 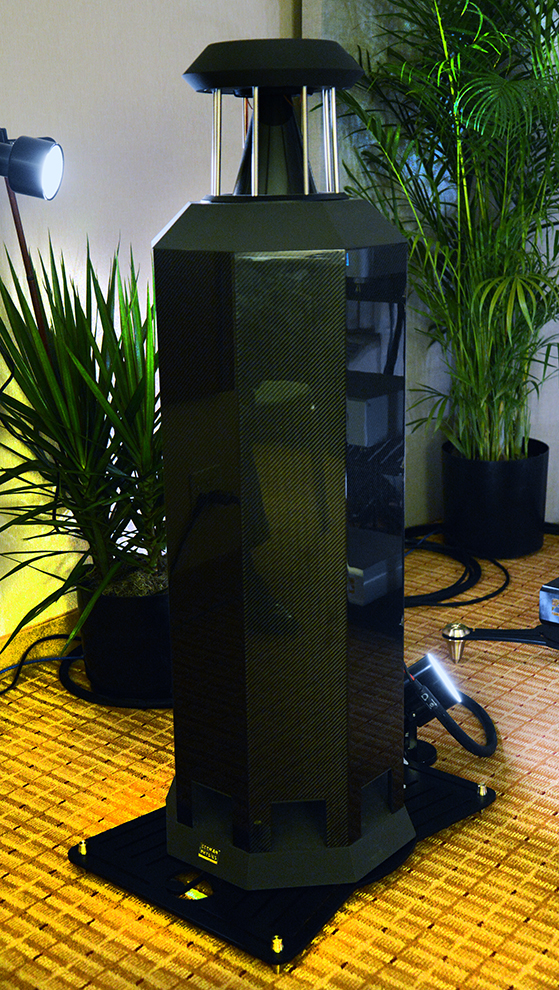 I was very taken by the German Physiks Carbon Mk IV ($31,350/pr.), which uses a 12″ cone woofer crossed over at 190Hz to its signature carbon-fiber cone DDD driver, all in a new carbon-fiber-reinforced cabinet in an attempt to raise the bar on resolution and dynamics for a system of this size. Sourced with the Ayre CX-7eMP CD Player ($3950), feeding the Merging Technologies NADAC ST12 ($10,500) DAC, preamplification was the Ayre KX-R Twenty ($27,000), amplification was via the Ayre MX-R Twenty monos ($29,500/pr.), and all cabling was Purist Audio Design. The result was a remarkably coherent sound with an enormous yet very well focused sound field.

The GamuT RS7 ($39,990/pr.) floorstanders really got my attention. Sourced with the Pear Audio Blue Kid Thomas/Cornet 2 tonearm and optional power supply ($9995) and Ortofon Cadenza Black cartridge ($2729), using all GamuT electronics and cabling, it turned in an amazing performance. Bold dynamics, smooth balance, accurately sized and located images and staging queues, and purity of tone were no problem for this system.

Philip O’Hanlon’s “On A Higher Note” hosted the Longs Peak Room on the Mezzanine level. Listening to 2-channel or 5-channel surround (by employing a phantom center mode) in this room was a very musical experience, featuring Laurence “Dic” Dickie’s Vivid Giya G3s ($40,000/pr.) in the front, and the Vivid Oval V1.5s ($7990/pr.) for rears. Analog playback was handled by a Luxman PD-171AL table ($6200), Schroeder “Alto” tonearm ($TBA), with a SoundSmith “Hyperion” cartridge ($7500), and the Luxman EQ-500 vacuum-tube phonostage ($7990), while the new Merging Technologies NADAC multichannel DAC ($11,500) decoded ones and zeros. Electronics were all Bruno Putzeys’ Mola-Mola gear, featuring the Makua preamp ($13,450), internal phonostage ($2500) and DAC ($5000), and Kaluga power amp ($18,000). Simply one of the most dimensional, spacious, and highly coherent presentations I’ve had the pleasure of experiencing.

The Kii Three speaker system, new from Bruno Putzeys, was another showstopper. Though the Kii Threes are just over $16,000 a pair with stands, they are the most serious excursion into the potential of powered loudspeakers I’ve yet heard. They use four 6.5″ woofers, a 5″ midrange, and a 1″ wave-guide tweeter, in a sleek, compact 8″ by16″ by 16″, 33-pound package, with Active Wave Focusing crossover filtering, and a listed frequency response of 20Hz to 25kHz, +/- 0.5dB! Each Three contains six channels of DSP D/A conversion, as well as six channels of 250W NCore Class D power amplification. They delivered a confident, full, rich, focused, and detailed sound that would serve to convince anyone unable to see them that they were a good-sized floorstanding speaker.

Best Sound (Cost No Object)
YG Acoustics Sonja 1.2, driven by all Audionet electronics, sourced by the Kronos Pro with Air Tight P-1, all hitched together magically with Kubala-Sosna Elation cabling exuded, to my ears, pure musical enjoyment and involvement.

Best Sound (For the Money)
Andrew Jones’ new Elac F-5, at less than $560 per pair, were even better than I had expected. How he hits this level of transparency and bloom at this price is beyond me!

Most Significant Product Introduction
I have been dying to hear D’Agostino Momentum Phono Stage since the first time I saw it on static display. The wait was worth it! I’m hoping to take a closer listen to it soon.

Most Significant Trend
The continuing momentum of the resurgence of analog playback. So many rooms featured turntables and vinyl that I was shocked!

Most Coveted Product
Dan D’Agostino’s Momentum Phono Stage. After only being permitted to drink it in visually at static displays over the past six plus months, it was an absolutely captivating listen.