Attending RMAF since 2007, I’ve come to look forward to this yearly pilgrimage to the mile-high city. What I most enjoy about this show in particular is the relaxed atmosphere that surrounds the event. I’m of a strong opinion that if anyone reading the show reports of this event hasn’t attended a consumer show like this—and is really interested in “seeing” what this is all about—should make plans to attend. The ability to communicate with manufactures, dealers, reviewers, and fellow audiophiles in addition to listening to audio components rarely available in any single dealership is a priceless experience not to be missed. Even with my history of attending RMAF, I always find new things, meet new people, and never have time to cover everything I want to see, including my areas of focus (new introductions of analog and solid-state electronics) for reports. With that said, here we go… 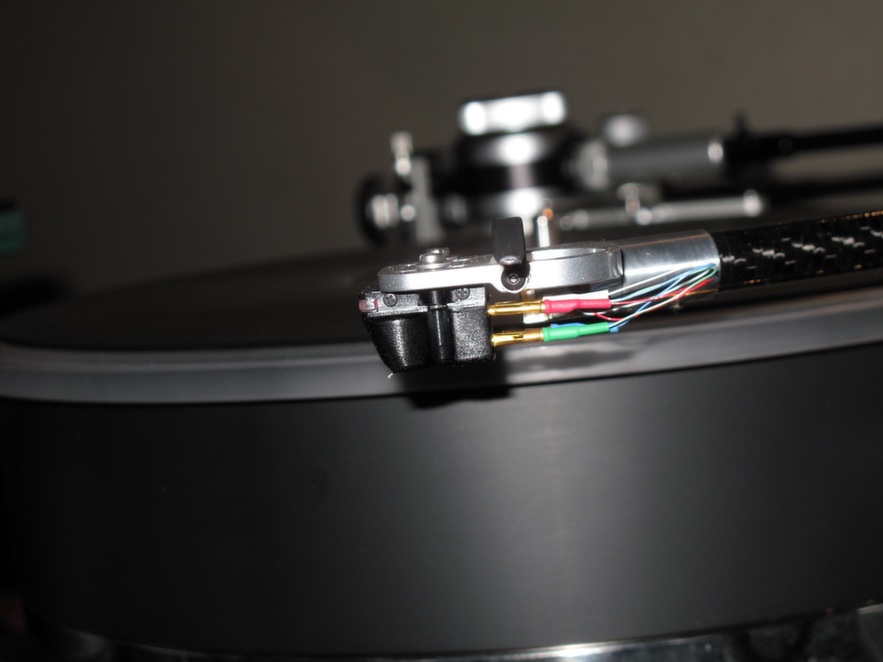 DS Audio
Handling distribution for North America, Musical Surroundings introduced the DS Audio DS-W1 Optical Phono Cartridge and Equalizer to the North American shores in Denver, Colorado. DS Audio, headquartered in Japan, is a subsidiary of the parent company Digital Stream Corporation. Some of you may be familiar with a few of their product development involvements like the Microsoft optical mouse and gaming devices along with Blu-Ray and optical disc testers. The DS-W1 cartridge is housed in an aluminum body and weighs 6.5 grams. The tracking weight range is between 1.3 to 1.7 grams with 1.5 grams being optimal. The cantilever is made from solid boron and it holds a Shibata stylus. The sound produced was very quick and incisive with what seemed like a healthy dose of macro-dynamic capability. The expected price is targeted to be between $8,000-$10,000 for the DS-W1 cartridge and equalizer. 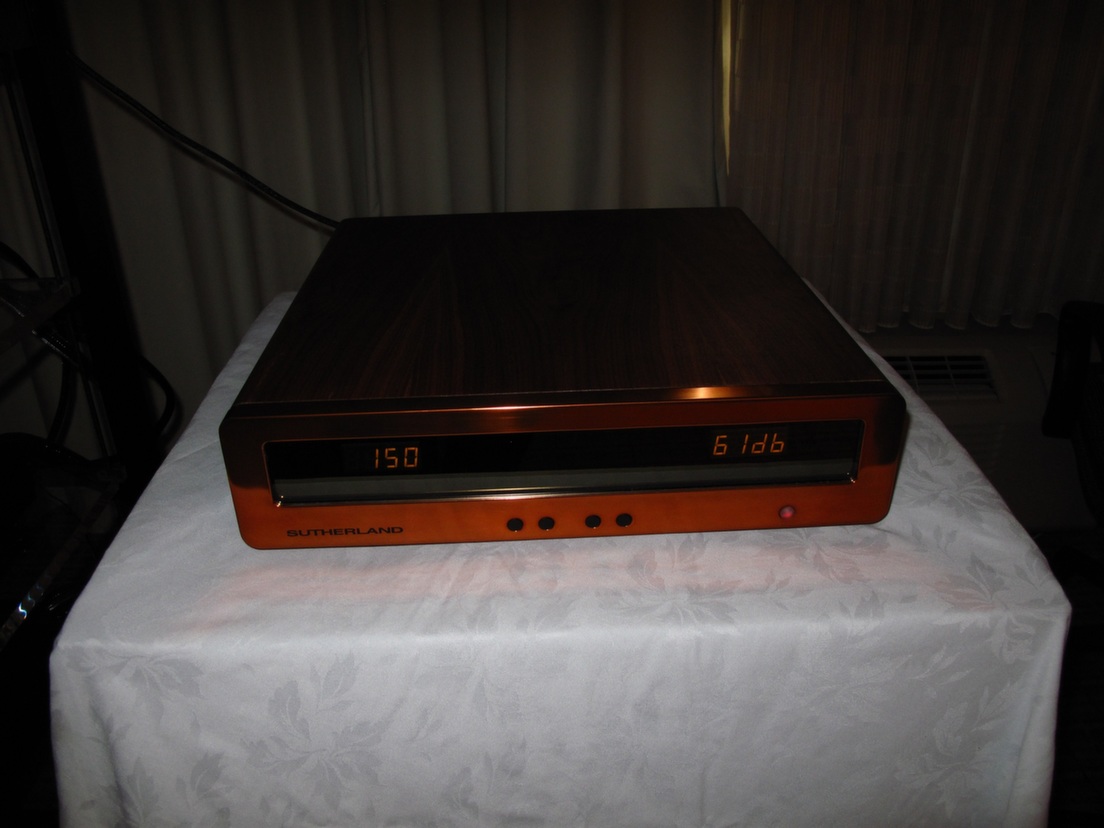 Sutherland Engineering
Ron Sutherland of Sutherland Engineering is mostly a straight-forward, no-frills type of audio designer. He tends to stick to fundamental design principles without venturing into exotic parts or excessive over-the-top design practices. This time, however, Sutherland Engineering decided to venture into that arena and the results are the Spatial ($25,000) phonostage. The unit features adjustable loading from 10 Ohms to 1270 Ohms in 10 Ohm increments, gain settings from 55dB – 67dB in 3dB increments along with 71dB and 74dB settings, front panel LED brightness, and LED “RGB like” color adjustments so users can create the LED color and brightness of choice. The rear panel allows for single ended or balanced inputs as well as outputs of the same choice. These are all nice features but what’s inside includes vertical and horizontal PC boards in a 3D arrangement with complete handcrafted point-to-point solid silver wiring and Teflon insulated standoffs for components, solid copper power and ground planes, 1/8” thick fiberglass PCB foundational board layers, and a very healthy amount of film and electrolytic decoupling capacitors for the power supplies. 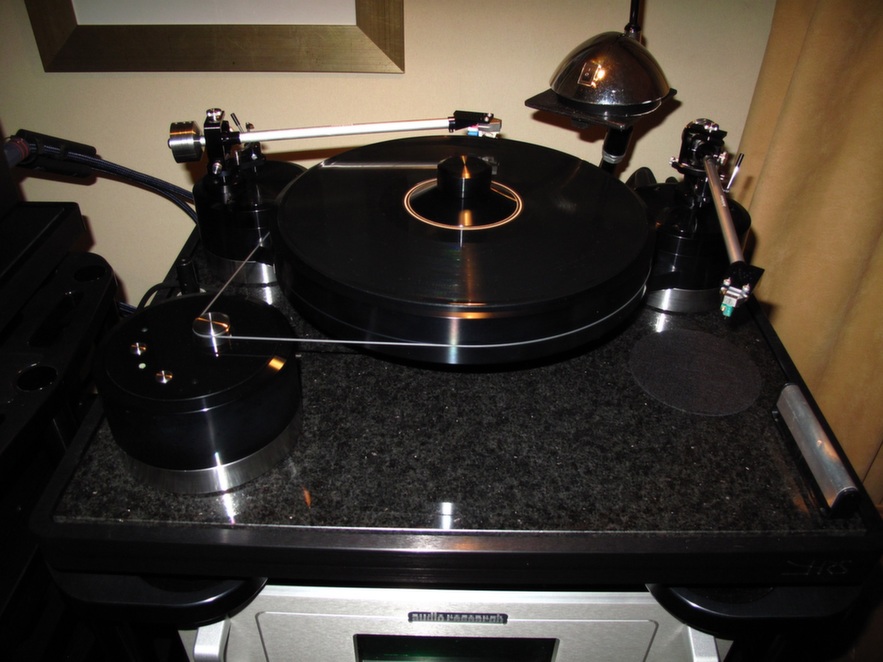 Brinkmann
The Brinkmann Spider made its first appearance at RMAF this year. The Spider features the capability to handle up to four 9”-12” tonearms from Brinkmann or any other manufacturer. The tonearm collars are attached to the bearing housing via an attachment location which allows placement flexibility for user preference. The setup for RMAF featured two Brinkmann 10.5 ‘arms. The Lyra Kleos mono and Atlas stereo cartridges were being shown with the ‘table. The Spider features a 4-phase, 12-pole motor drive mechanism, external solid-state power supply (although the show unit had the optional RöNt II vacuum-tube power supply), a hydrostatic zero-maintenance bearing, and a 21.6lb platter. Using Spider ‘table with the Lyra cartridges, ARC electronics, Vandersteen amps and Model 7 speakers, allowed listeners to easily identify and select a preference during the Beatles Mono vs. stereo comparison I attended regardless of which cartridge was used to play the mono pressings. Additional listening substantiates the Spider’s ability to perform very well with high-quality cartridges. 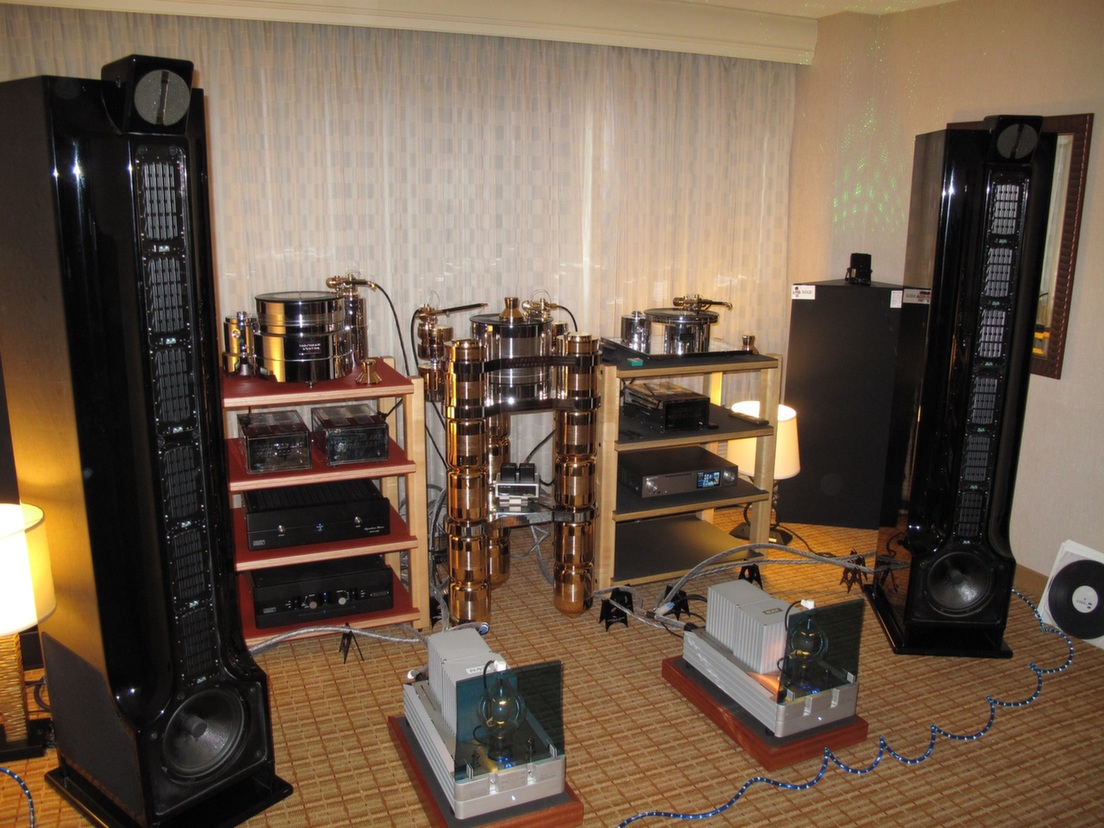 TriangleArt
Triangle Art unveiled the new 850-pound flagship Ultimate LE ($129,000) turntable at this year’s Rocky Mountain Audio Fest. While the information in the room was sparse, the physical size of the turntable is anything but. Sitting between the Signature ($15,995) and the Concerto ($3,995), which are on equipment stands, the sheer size of the Ultimate LE turntable is readily visible in the accompanying photo. Checking the information on TriangleArt’s website, the Ultimate LE can hold up to two tonearms, is made of brass and chrome metal composite, has a Crystal Digital Technology speed controller, a Hydro-dynamic oil fed bearing, and a 229 mm chrome polished composite platter. The new Appolo MC cartridge was mounted on the ‘table for listening. Due to my unfamiliarity with the performance of the speakers being used in the room, the Ultimate LE’s performance was difficult to judge. 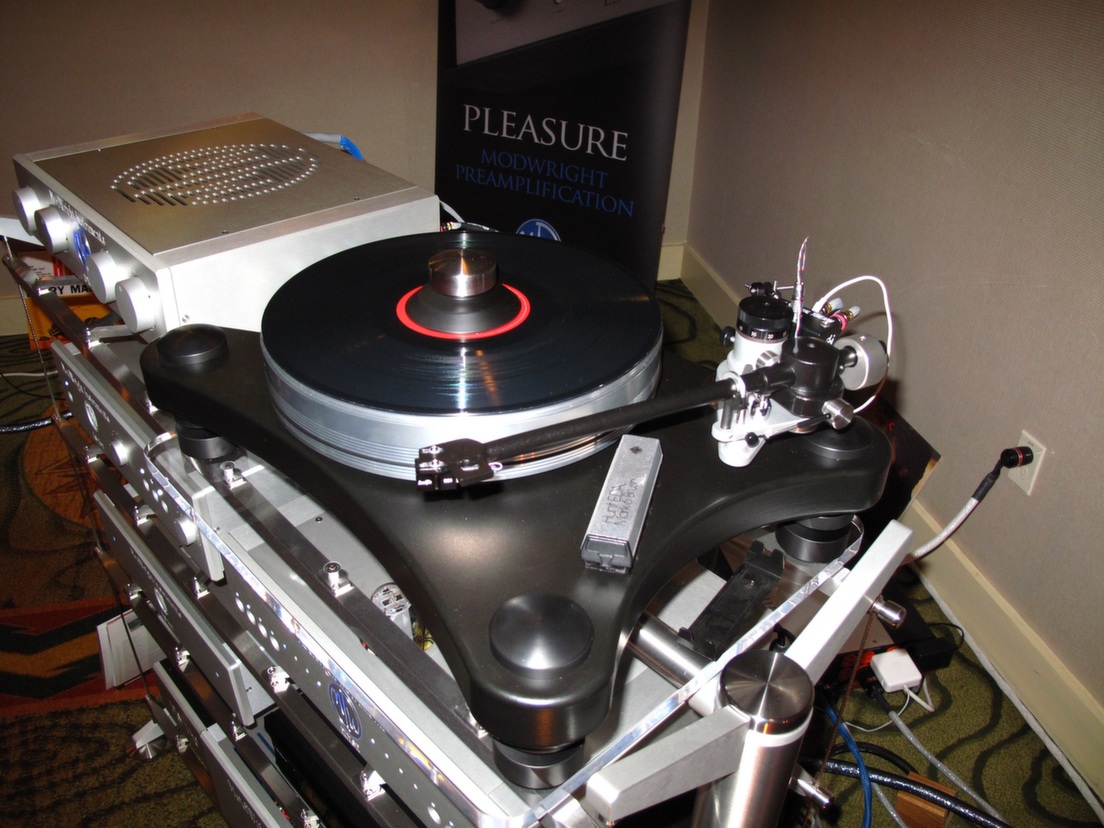 VPI
VPI showed its new Prime turntable in several rooms at RMAF. I listened to the ‘table extensively in the ModWright/Daedalus/WyWires room. The Prime which comes with the 3D printed ‘arm and outboard motor pod is priced at $3500. The Prime was equipped with a Shelter cartridge feeding the ModWright PS 150 Phonostage (which I mentioned at Axpona 2014 coverage). The complete system on whole produced a big, warm, and full sound. 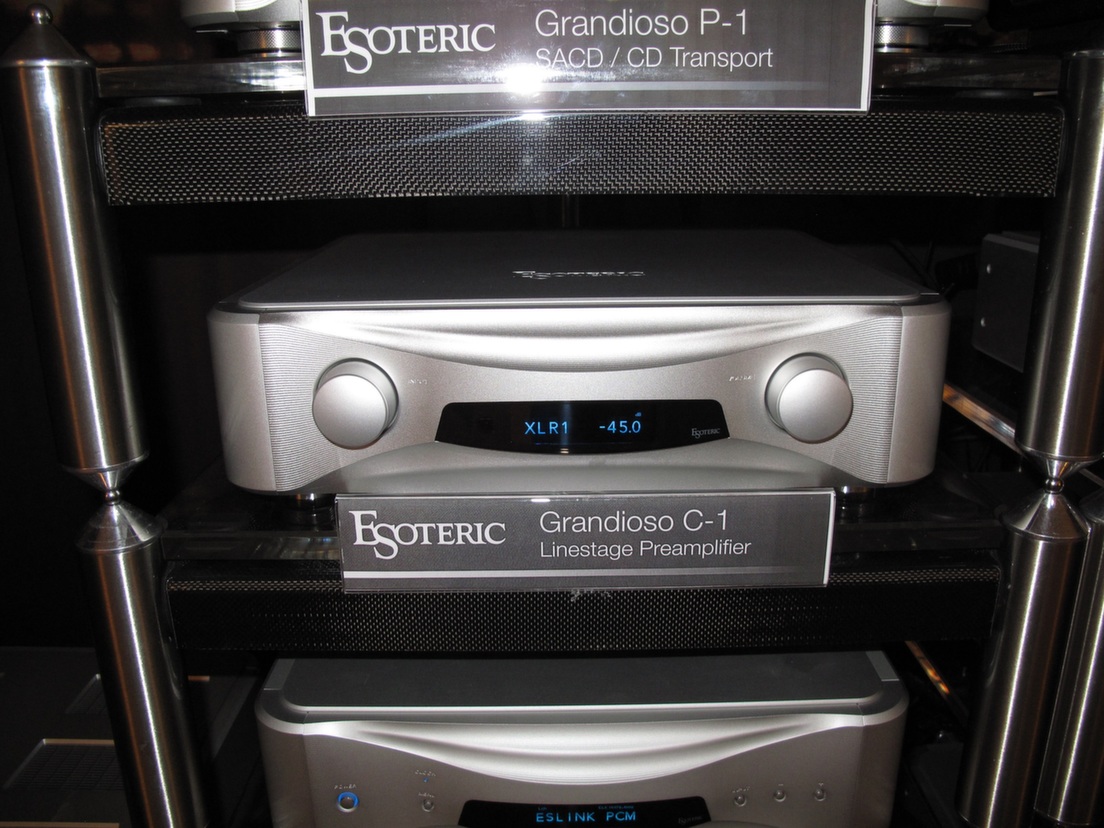 Esoteric
The Esoteric Grandioso C1 Linestage Preamplifier stitched together a complete Esoteric system that included the G-01 Master Clock along with Grandioso P-1 SACD/CD Transport, two Grandioso D-1 Mono D/A Converters and the Grandioso M1 Mono amplifiers. Digital files were sourced from a MacBook Pro and Cabasse Stream Source. The two-chassis C1 is designed with an internally isolated dual mono main unit and a separate dual mono (including AC input plugs) DC power unit. This extra attention to power isolation and channel separation is said to increase transparency and musical vibrancy. The C1 has two RCA and three XLR inputs with two RCA and two XLR outputs per channel. The unit also comes with a remote control. The front panel has a power switch on the DC power unit. The main unit has a front panel display, Input selector and Volume control knobs. The finish is elegant and appealing as was the sound produced by the Grandioso combination. 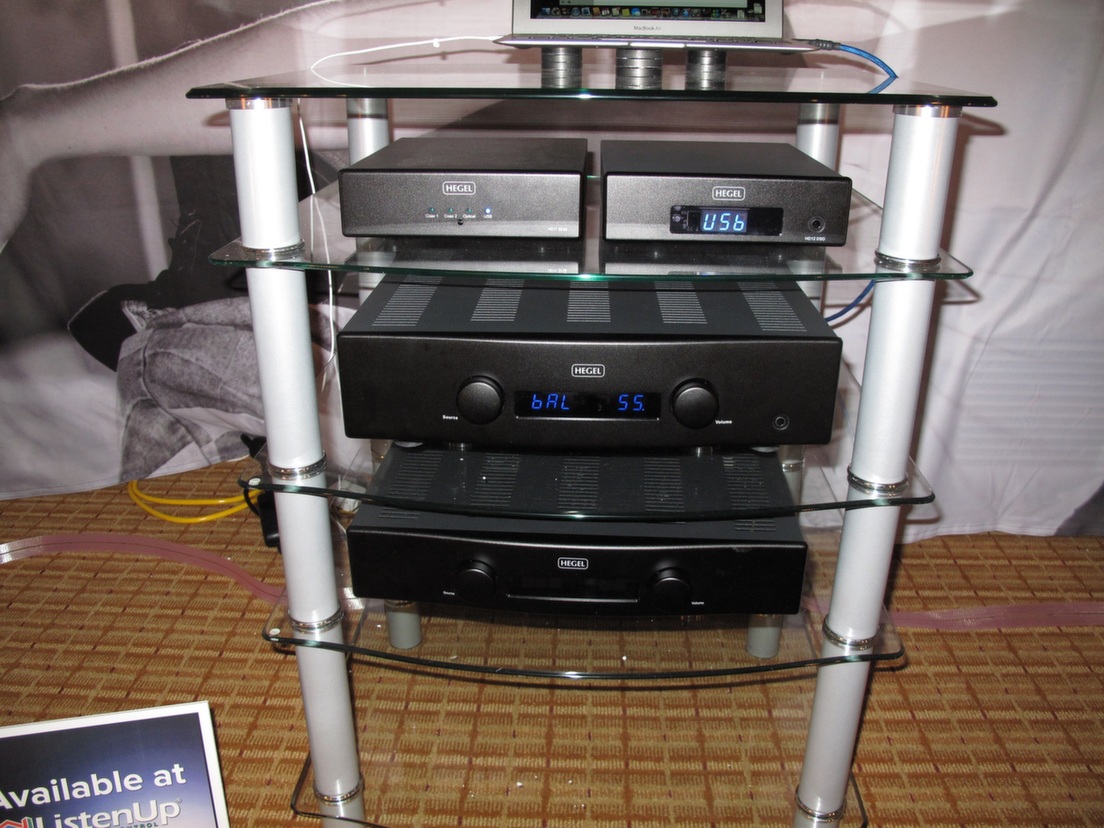 Hegel
Hegel introduced the H160 ($3,500) integrated amplifier. The newly introduced H160 features an upgraded preamplifier section said to be an improvement over the electronics in the H80 and has new output transistors that are faster than previous devices used. The new integrated also incorporates Apple AirPlay and DLNA for wireless streaming along with Ethernet, coaxial, optical, USB, RCA, XLR and Home Theater bypass inputs. The output power is spec’d at 150Wpc/250Wpc into 8 Ohms/4 Ohms. The sound of the all Hegel system feeding Magico S3 loudspeakers was a step above other Hegel demos I’ve heard in the past using speakers from the same manufacture. 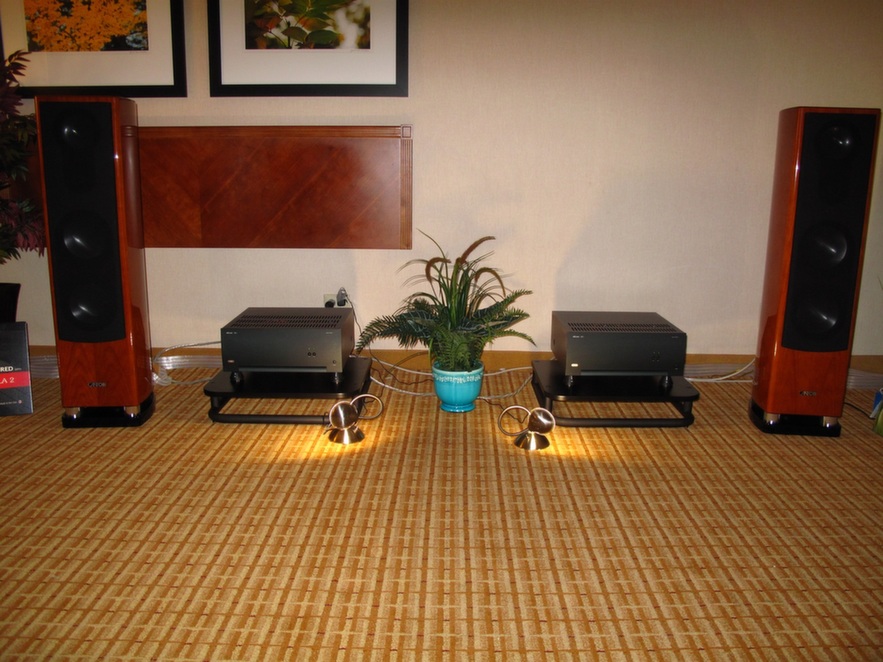 Arcam
The Arcam P49 is a new bridgeable class G stereo amplifier capable of producing 200/400 watts per channel into 8/4 Ohm loads. The low distortion P49 spend most of its time delivering up to 50 watts of class A power. When called upon to go further, the amplifier is capable adaptively switching the power rails (class G) via a preview circuit that delivers the extra power from higher voltage rails with large energy reserves sitting in standby until needed. The result is an amplifier that runs smoothly in class A with lower heat via low voltage rails until the higher voltage rails are needed to run the amps harder during the short peak power moments. 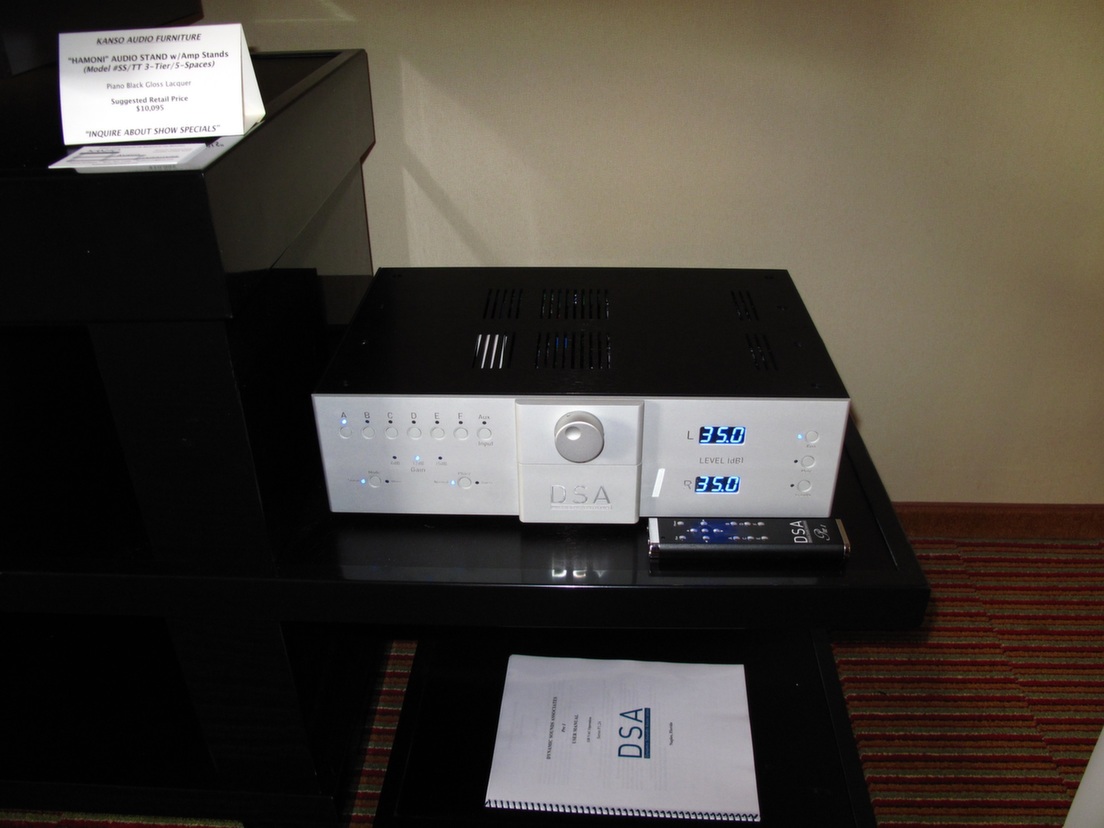 DSA Pre I
Dynamic Sound Associates added the Pre I Linestage Preamplifier to its line of products this year. The Pre I ($16,500) features six rear inputs (three RCA and three XLR) and one (AUX) front panel RCA input. Outputs include XLR and RCA with a fixed record/tape out and an included headphone jack on the front. Phase, Mono/Stereo, and 6dB-12dB-15dB Gain selection buttons are also included in order to maximize system performance and adapt source input levels. There is an included remote control and the Pre I features a dual (volume/balance) displays. 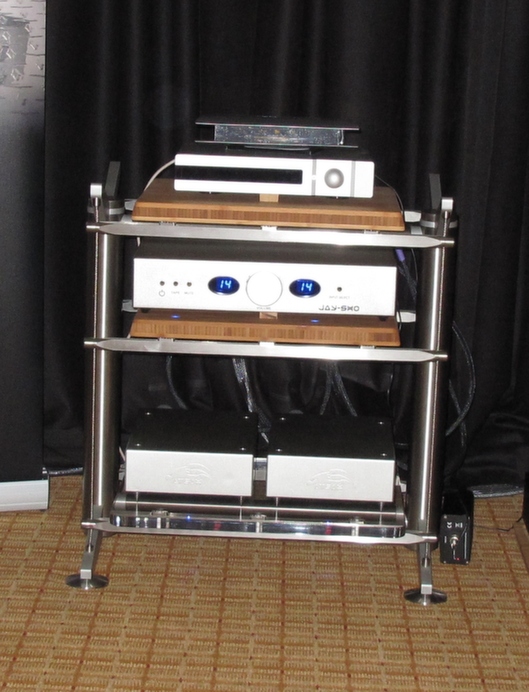 AcousticImagery JAY-SHO
AcousticImagery introduced the JAY-SHO balanced passive preamplifier to complement its Atsah monoblock power amplifiers. The JAY-SHO features remote control, a 100% passive autoformer based signal path, -52dB to +7dB in 1dB steps of attenuation/gain, balance control and mute capability. The JAY-SHO is fully balanced with six XLR inputs and two XLR outputs. The control section is powered by a 9Vdc input socket on the rear panel of the unit. On the front panel are dual volume/balance displays and a volume knob along with Input, Mute, Tape, and Power buttons.

Miyajima Laboratory
The Miyajima Madake stereo cartridge made a debut at RMAF this year. The Madake features a cantilever made of bamboo that is said to reduce resonances associated with cantilever. The cartridge features .23mV output, tracks at 2.5 grams, has a Shibata stylus, and a body made of African Blackwood. The sound of the cartridge was hard to pin down in the system it was being used in. I’ll look forward to an opportunity to hear the cartridge under better known conditions in the future.

Other Notables
Although there weren’t very many new introductions in the analog and Solid-State pre/amplifier arena to compete with CES-type introductions, I found enough to fill the most significant introduction sections of both areas of interest with a few extra debuts to boot! In addition to these, PS Audio showed a pair of still-in-development (PerfectWave Power Amplifier) hybrid Tube/MOSFET based amplifiers that are expected to be released around March of 2015. These amplifiers were driving the rarely seen Infinity IRS Beta speakers using the DirectStream DAC as a source. 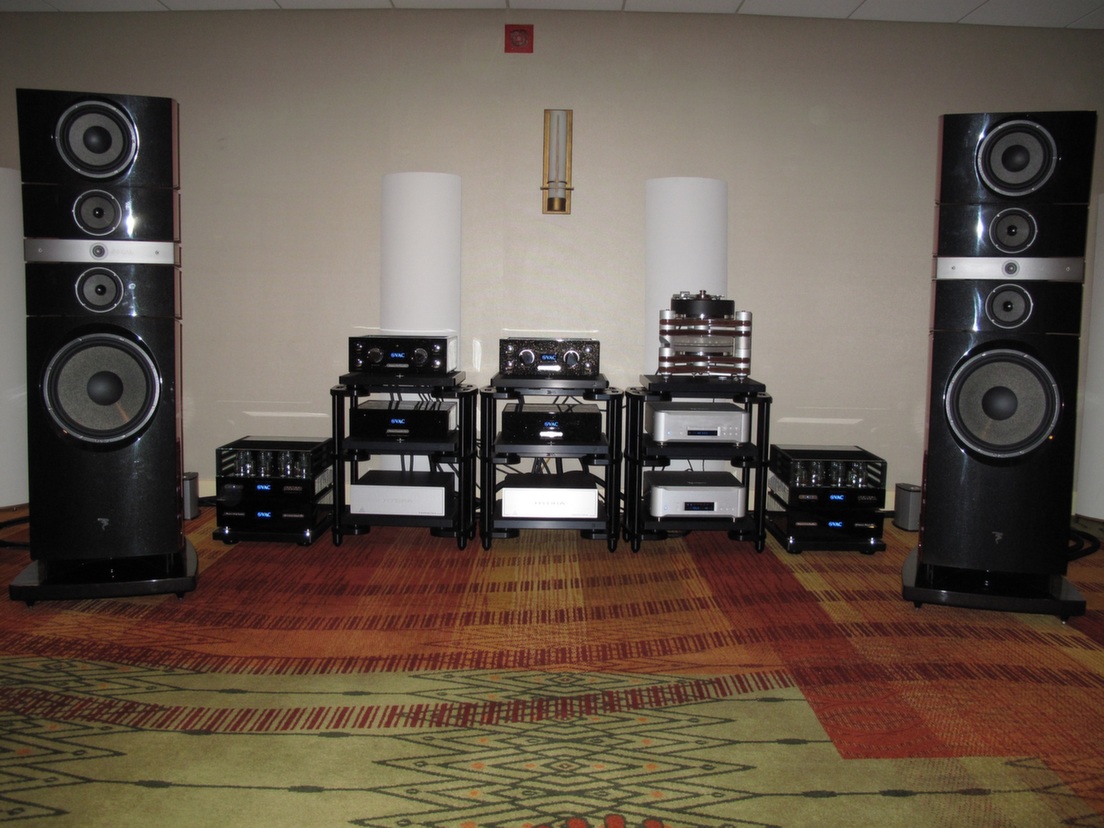 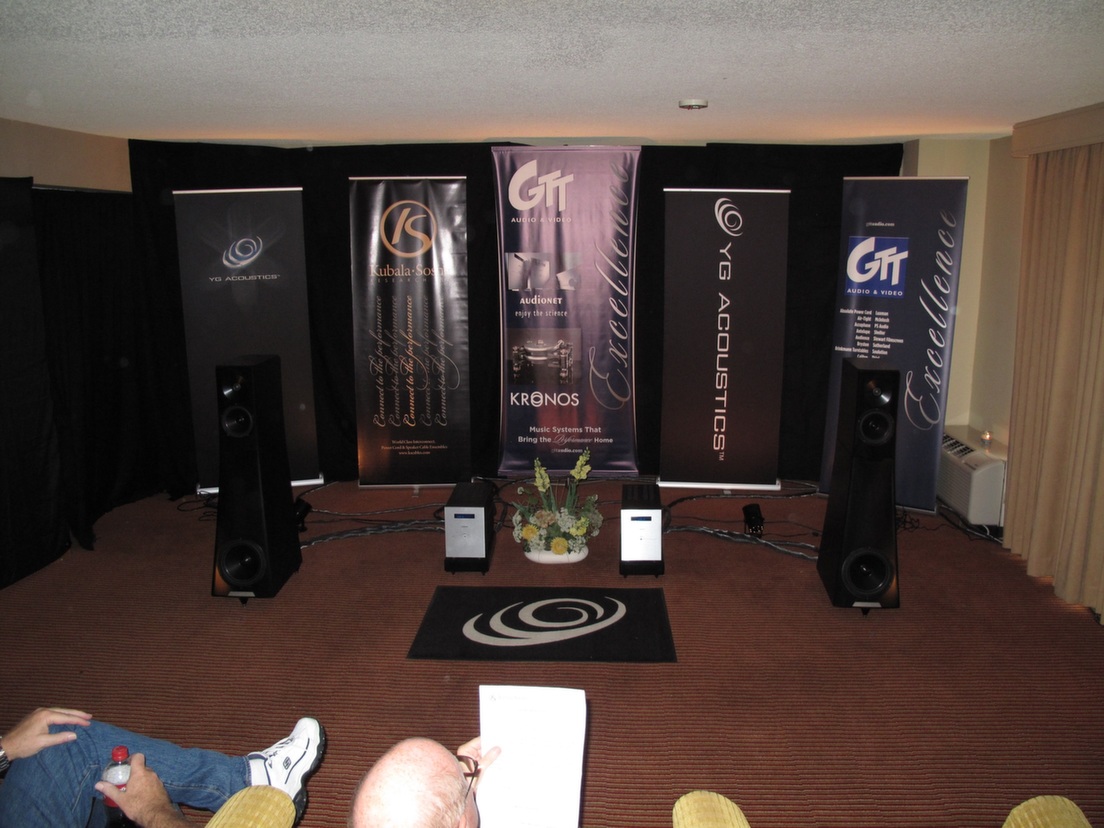 2) GTT Audio put together its best sounding room I’ve heard from the company at RMAF. Component contributions were from YG Acoustics/Audionet/Air Tight/Kronos/Kubala-Sosna.

3) VTL and Wilson Audio produced good music with the system consisting of components from Spiral Groove/Lyra/dCS/HRS/Transparent/Nordost. One note was the use of 2 Watchdog Subs, the Wilson Controller and 2 S-400 Series II Stereo Amps vertically bi-amped to drive the Watchdog with one channel and the Sasha II with the other.

4) The all Esoteric Grandioso system with Cabasse Speakers/Subwoofer produced surprisingly good sound with digitally sourced music. Listening at sane levels produced sound that could be absorbed for hours on end.

5) The supposedly “out classed” $2,300 Scansonic MB-1 speakers paired with the Constellation/Ansuz combo was a joy listen to this year. The MB1 speakers didn’t miss much at limited output levels with electronics and speaker cables costing more that the transducers. 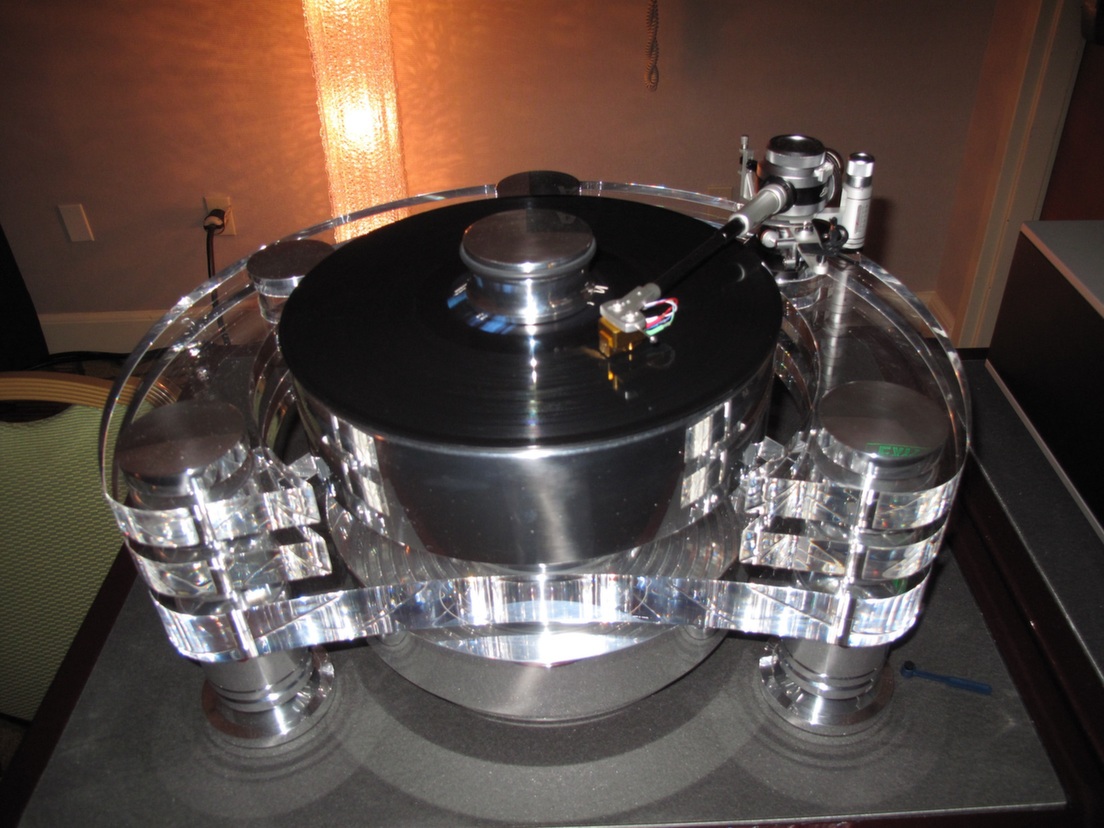 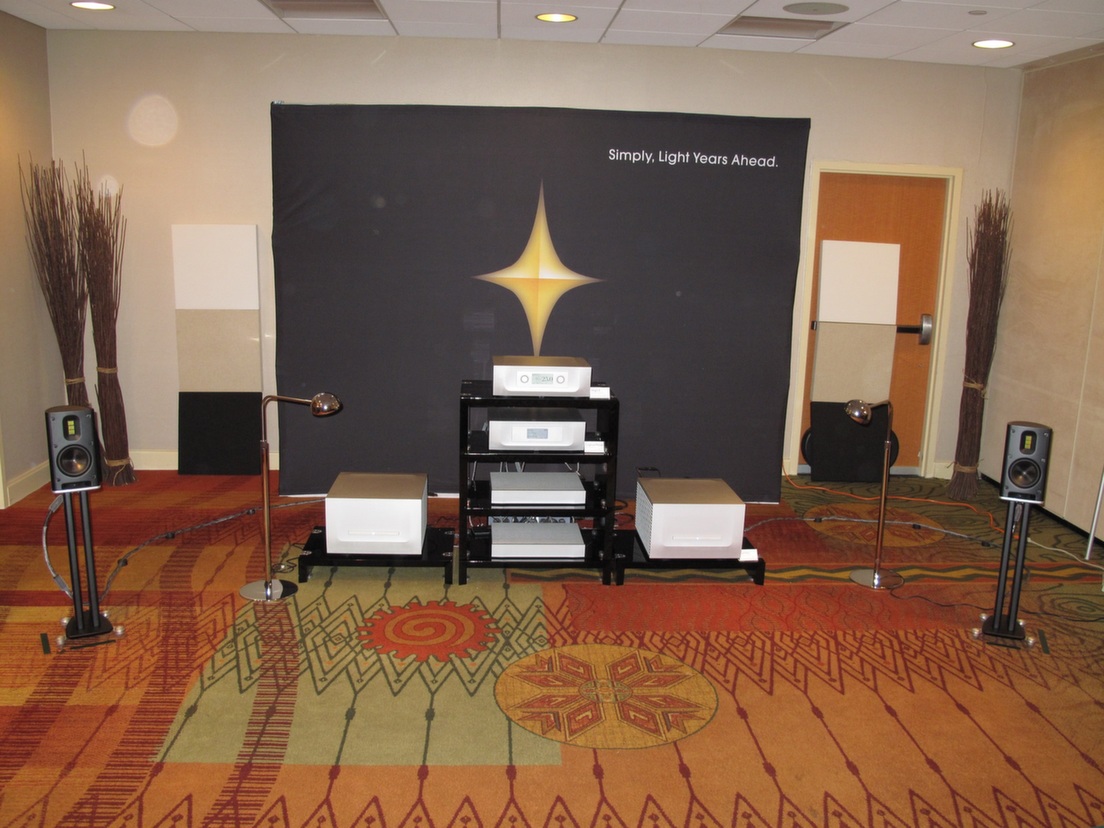 Best Sound (for the money)
Scansonic, MB-1 Speakers ($2,300) when coupled with high dollar Constellation Electronics and Ansuz cables carried the Raidho DNA into the affordable range. 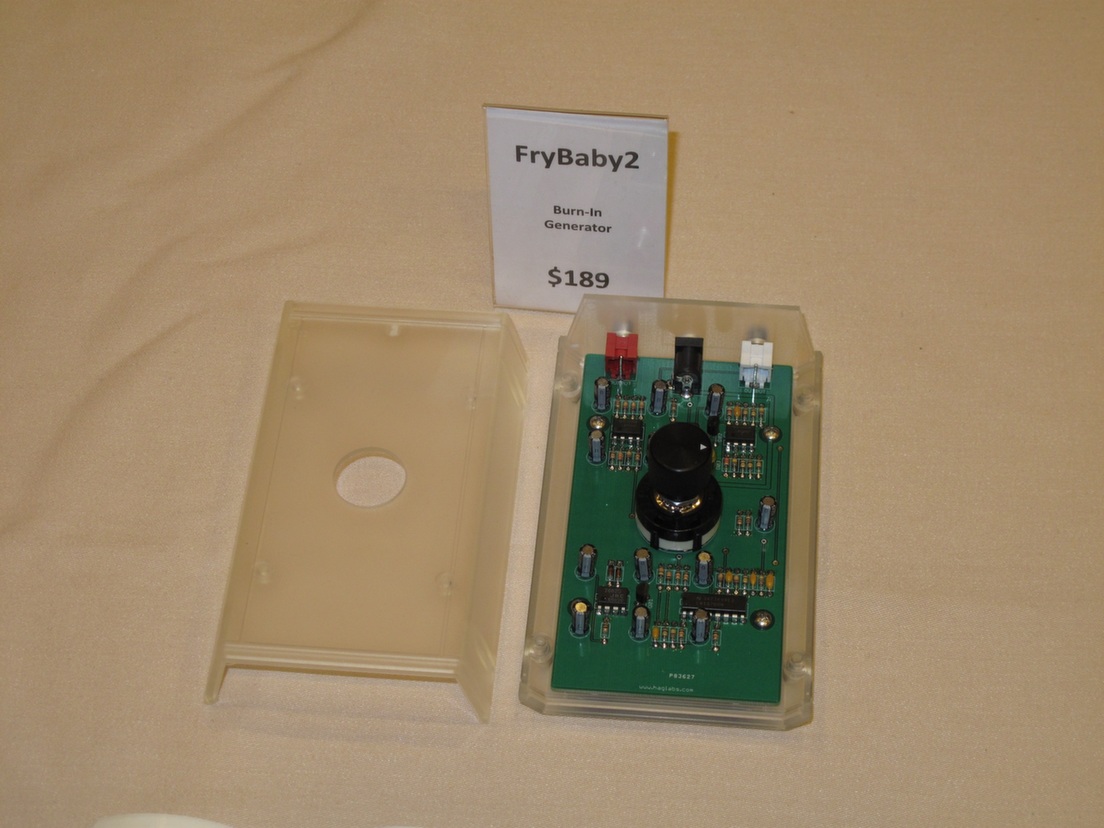 Most Technically Innovative Product
DS Audio’s DS-W1 Optical Cartridge and Equalizer with reads the stylus motion via optical sensing rather than electromagnetic detection within a magnetic field.

Biggest Surprise
The Scansonic, MB-1 Speakers, ($2,300) have Raidho DNA all over them, although power limited.

A Magical Hour at the Rocky Mountain Audio Fest