The Munich show has become the “must-visit” show on of the year for manufacturers, distributors, retailers, and journalists. One American manufacturer told me that if you’re not exhibiting in Munich, you’ll never break into the European market. That’s not surprising considering that this year more than 5200 trade visitors from 71 countries attended the show, not to mention the additional 11,000-plus consumers. 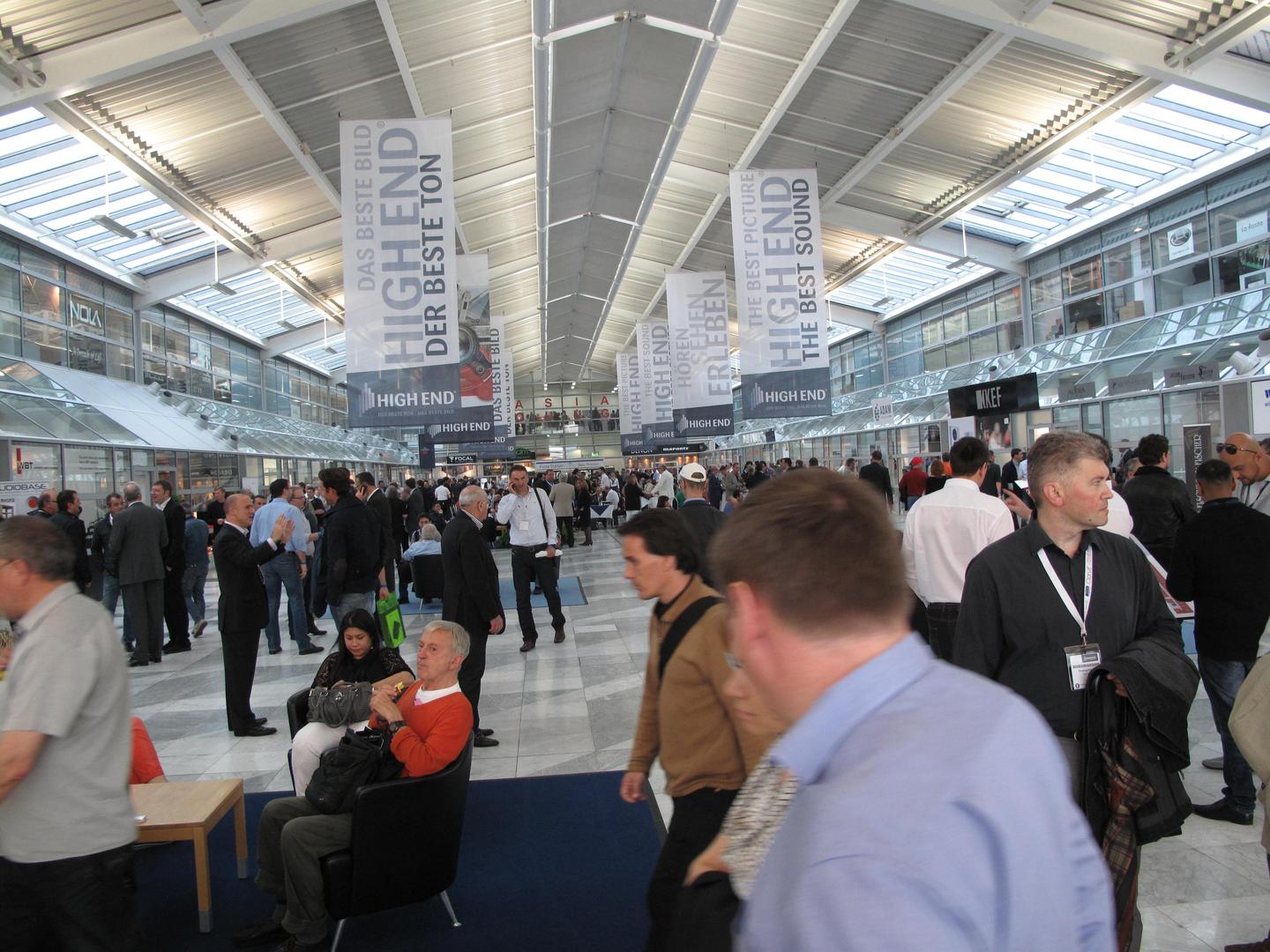 Munich has become the show for world premiers. Highlighting this trend, David Wilson of Wilson Audio was in Munich to personally present the new Duette Series 2 loudspeaker. The original Duette, an 8” two-way, was designed to fit in applications where a traditional Wilson floorstander wouldn’t—on a shelf, turned sideways, or on a stand positioned against the backwall. After six years of feedback on how customers actually used the Duette, Wilson redesigned the speaker to optimize its performance for the most common applications. For example, after discovering that the Duette was virtually never turned on its side, the new Series 2 was optimized for traditional vertical placement. The new Series 2 looks similar to the original, but with more elegant lines and a sloped front baffle for better time alignment. In addition to new drivers and an all-new cabinet made from X-material, the Duette Series 2 features the “low-jitter” crossover topology found in all Wilson speakers since the Sasha. The stands, which house the crossover, are also more attractive. The Duette Series 2 with the optional stand is priced in the same range as the Sophia Series 3—$15,000 without stand and $17,000 with. Wilson’s advice is simple; if you can position speakers on the floor out into your room, the Sophia 3 is the better choice by virtue of its larger cabinet and deeper bass extension. If your only placement options are against a wall or on a shelf, the Duette Series 2 will bring Wilson performance to that application. 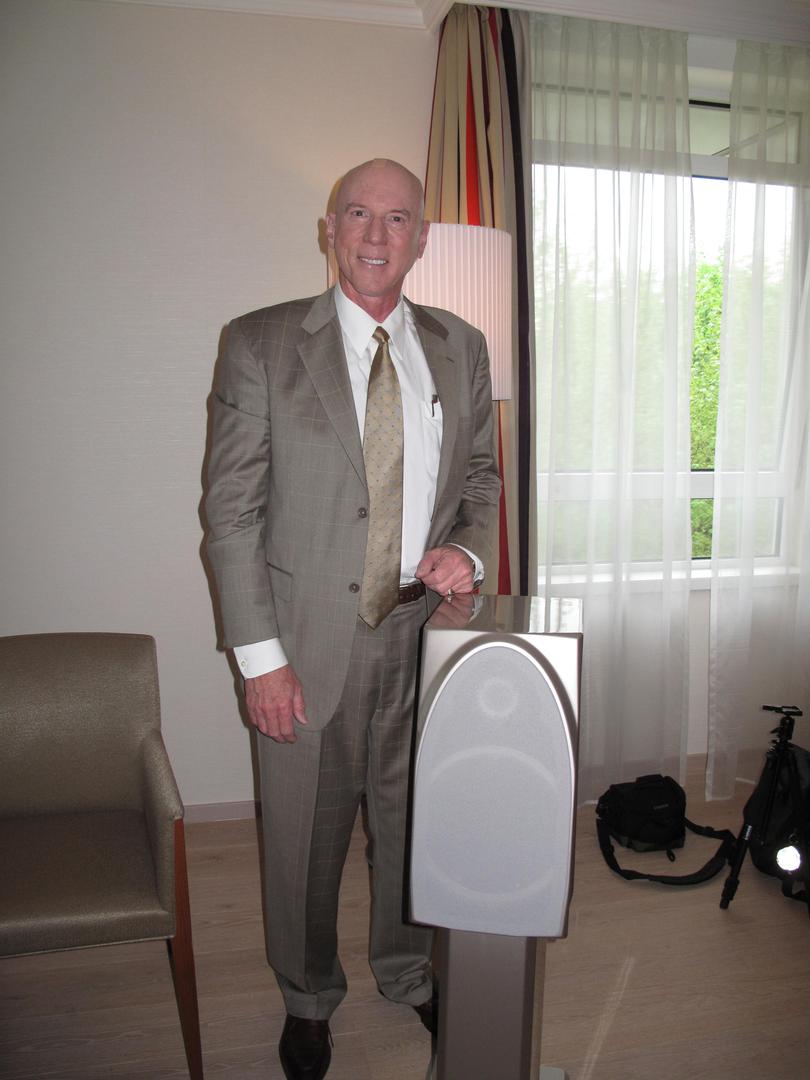 Focal has replaced the popular Chorus line of entry-level loudspeakers with entirely new versions. The Chorus line encompasses five models from the bookshelf Chorus 700 ($550) to the floorstanding Chorus 726 ($1849). Focal developed a new tweeter for this line that features a suspension system previously found exclusively in the Utopia series. The woofer/midrange units are Focal’s Polyglass, in which a cellulose diaphragm is coated with tiny glass spheres to increase stiffness while adding very little mass. The drivers are all manufactured in France, and were designed specifically for each product in the Chorus line. An optional new finish, called Black Style, combines high-gloss black with a textured black for a striking look. We’ve been big fans of the original Chorus line and expect great sound at affordable prices from the new series.

In other Focal news, the popular Scala Utopia (more than 1500 pairs sold of this $30k loudspeaker over five years) has been updated to the Scala Utopia 2. The new model features an entirely new woofer with a number of technical refinements that reportedly improve the bass performance. The price remains the same.

The German company AVM is on a roll, introducing 14 new products in Munich. The most interesting is undoubtedly the Music Library ML8T. This music server incorporates a whopping 1.2TB of SSD (solid-state drive) storage. The benefit? No hard drive, no hard-drive heat, no hard-drive failures, no moving parts, and the superior sound of solid-state memory. This drive is coupled to AVM’s top-of-the-line Ovation tubed linestage preamplifier stage and AVM’s Ultra DAC circuitry in the same chassis. The ML8T is controlled via an iPad app. It’s an interesting combination—1.2TB of solid-state memory coupled with a tubed output stage. AVM’s CD8T CD player combines the analog and digital sections of the ML8T, but in a CD player rather than a music server. The player also adds seven digital inputs with source switching, including a 192/24-capable asynchronous USB input. Five new streaming DACs also join the AVM lineup. The upper-end models incorporate the Ovation tubed linestage described above. Some of the DACs are identical except for the choice of a tubed or solid-state analog-output stage. 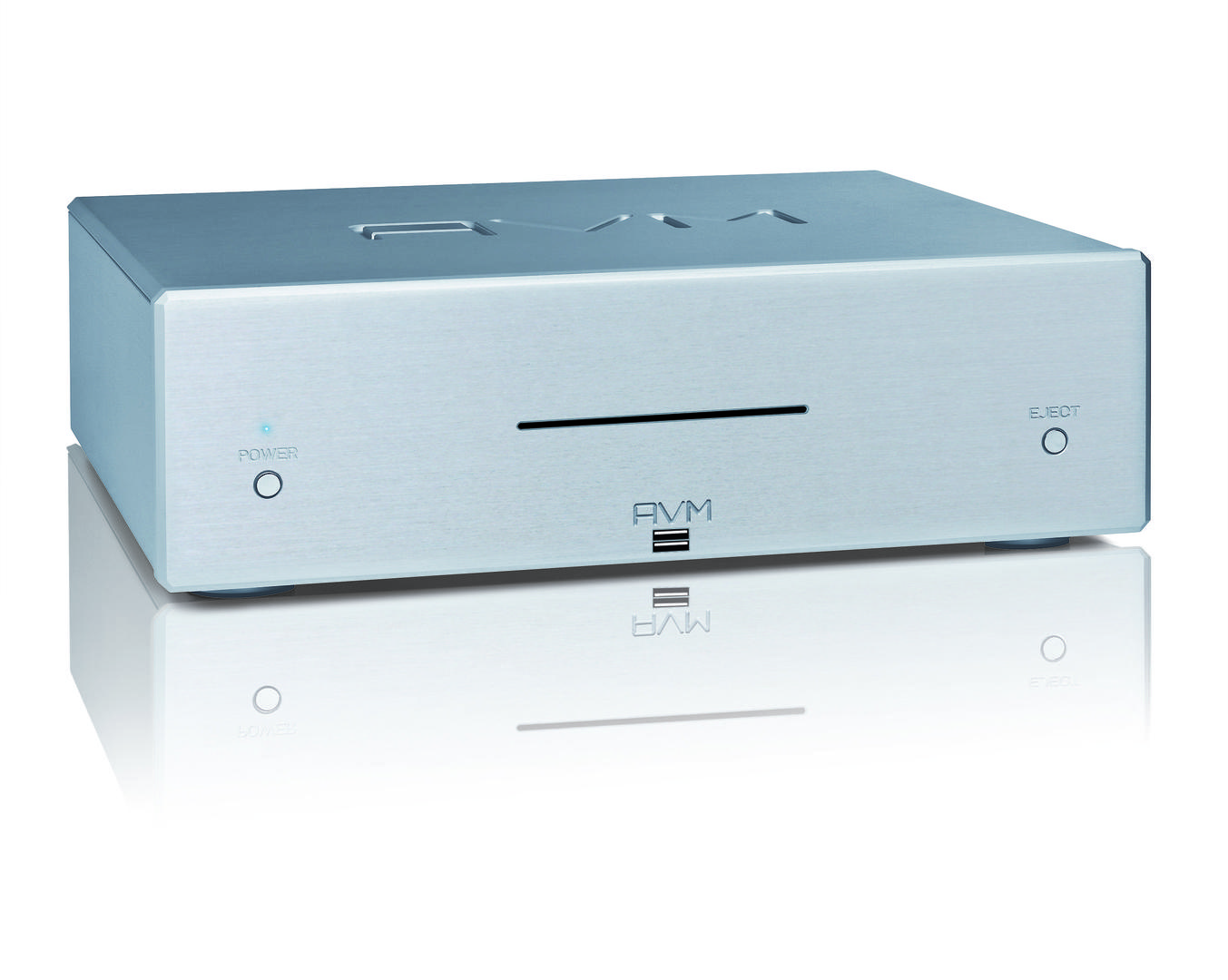 AVM hasn’t forgotten about its analog customers; the company showed the new P3.2 and P5.2 phonostages. Both tubed-based units have variable gain accessible from the front panel to accommodate a range of moving-coil and moving-magnet cartridges.

Danish loudspeaker giant Dynaudio used the Munich show for the world premier of the new Excite line. The four new models replace the well-regarded original Excite series. These are the X14 stand-mounteed monitor, X34 and X38 floorstanders, and the X24 center-channel. North American pricing has yet to be finalized, but I was told that the line would range from about $1500 to $4500 per pair when the products begin shipping in the third quarter. The line is based on all-new in-house developed driver technologies. A coated fabric-dome tweeter is coupled with woofers whose cones are made from ultra-light and rigid MSP (Magnesium Slicate Polymer). The Excite series was designed to present an easy load to an amplifier. Real wood finishes include walnut and rosewood, along with satin white and satin black lacquer. Visually, the new Excite looked considerably more modern and elegant when seen next to the outgoing models. 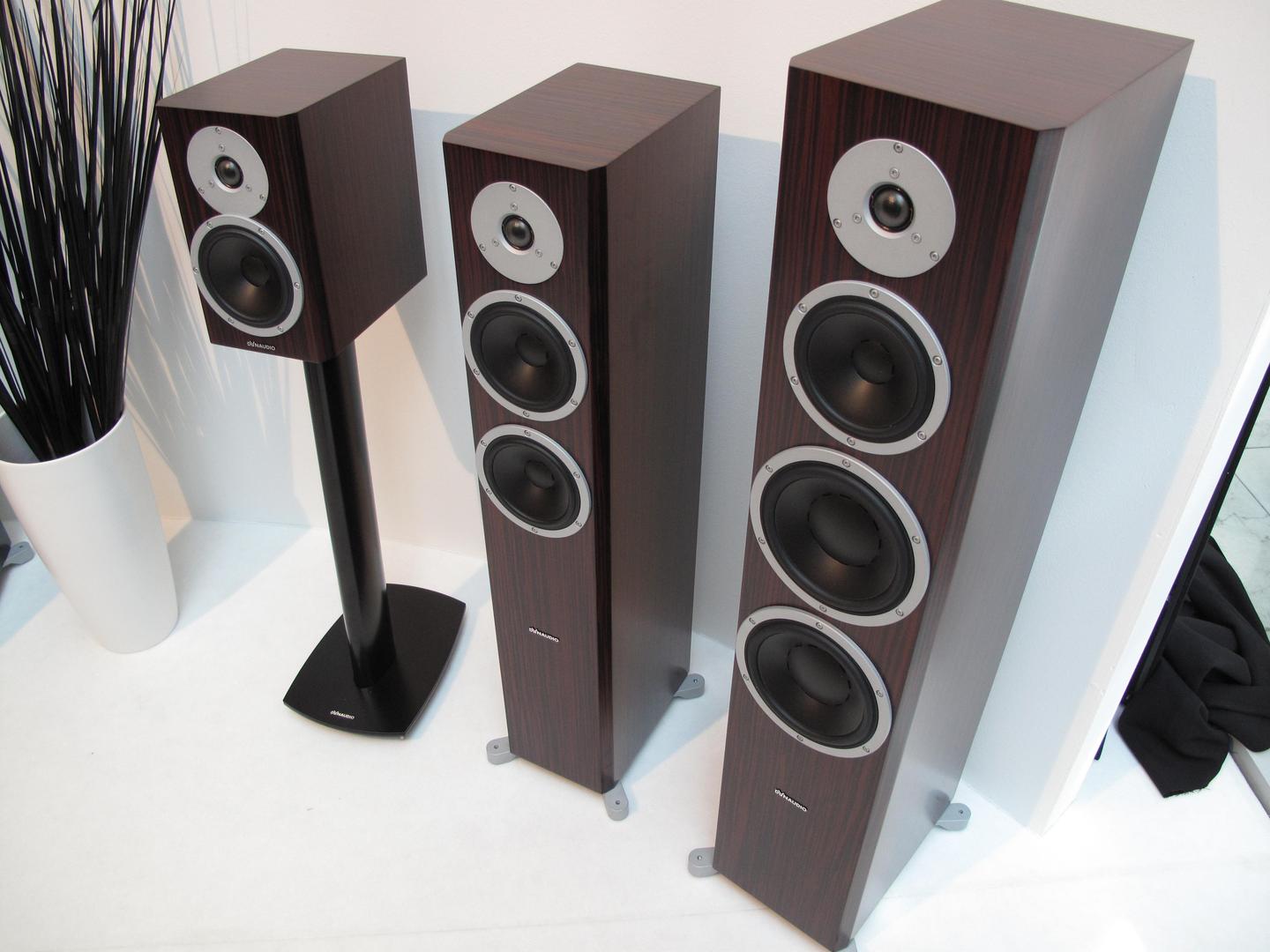 I got my first look at the stunningly gorgeous new Momentum preamplifier from Dan D’Agostino. The preamp is designed to complement D’Agostino’s well-regarded Momentum power amplifiers. The large illuminated front-panel meter indicates the output level, but it’s really there to visually match the power amplifiers and because it’s just plain cool. The large volume control, which surrounds the meter, has an amazing tactile feel. It’s one of those products you have to see and touch for yourself to appreciate. 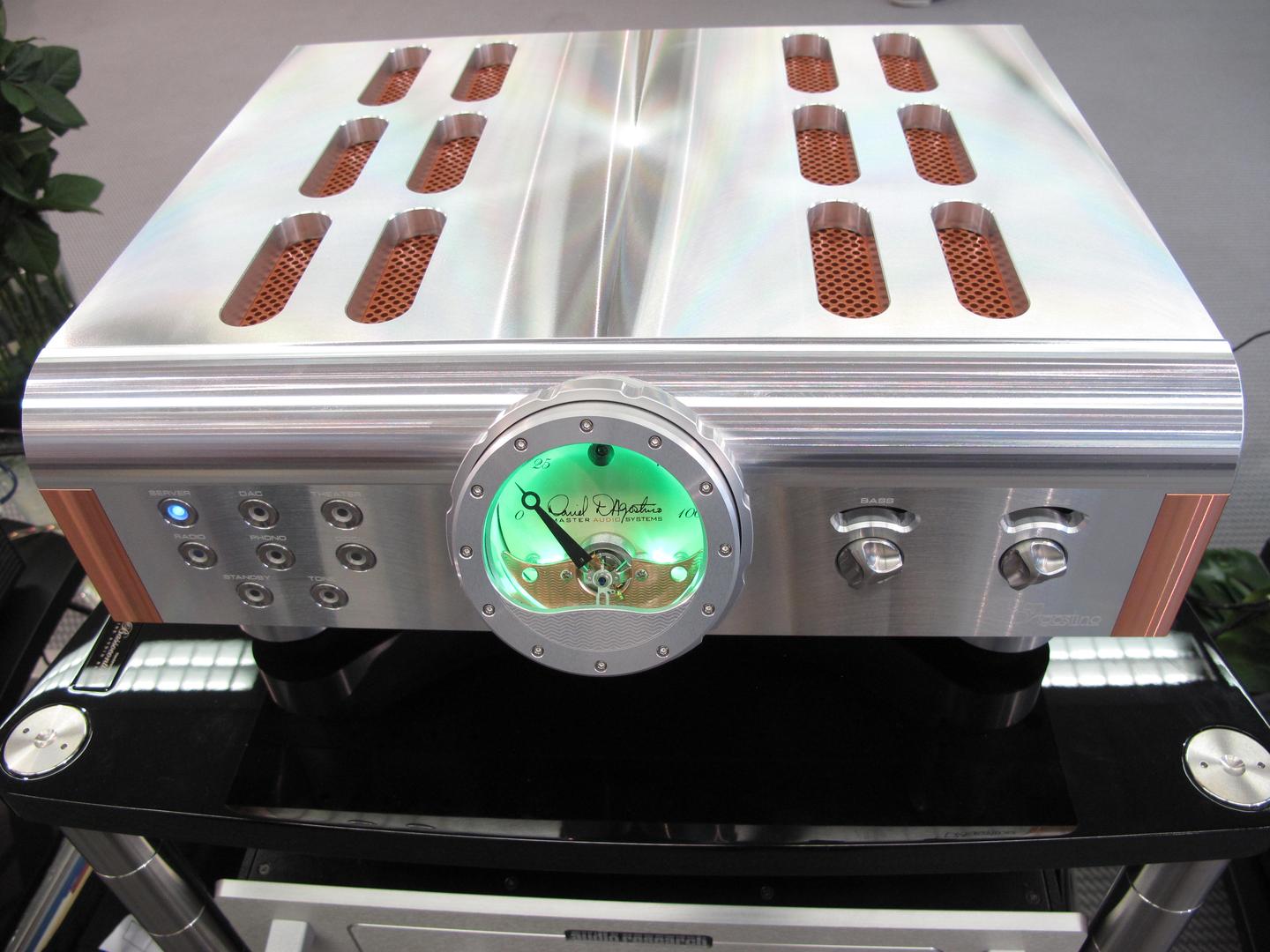 BMC introduced several new products, the most interesting of which is the PureDAC. The first in the PureLine Series, the PureDAC brings BMC’s high-end design techniques and build quality to affordable price points. The PureDAC combines a DAC, headphone amplifier, and preamplifier. The preamp’s digital inputs include USB, AES/EBU, TosLink, and coaxial SPDIF. Analog output is available on both balanced and unbalanced jacks. The preamplifier stage is integrated with the DAC’s current-to-voltage converter, eliminating the active gain stages of a traditional preamplifier. From looking at the features, technology, and beautiful build quality, I guessed the PureDAC’s price at $4000. I was way off—the PureDAC will sell for $1600 when it becomes available next month. BMC plans to introduce other high-value products in this series, including a phonostage and monoblock power amplifier. 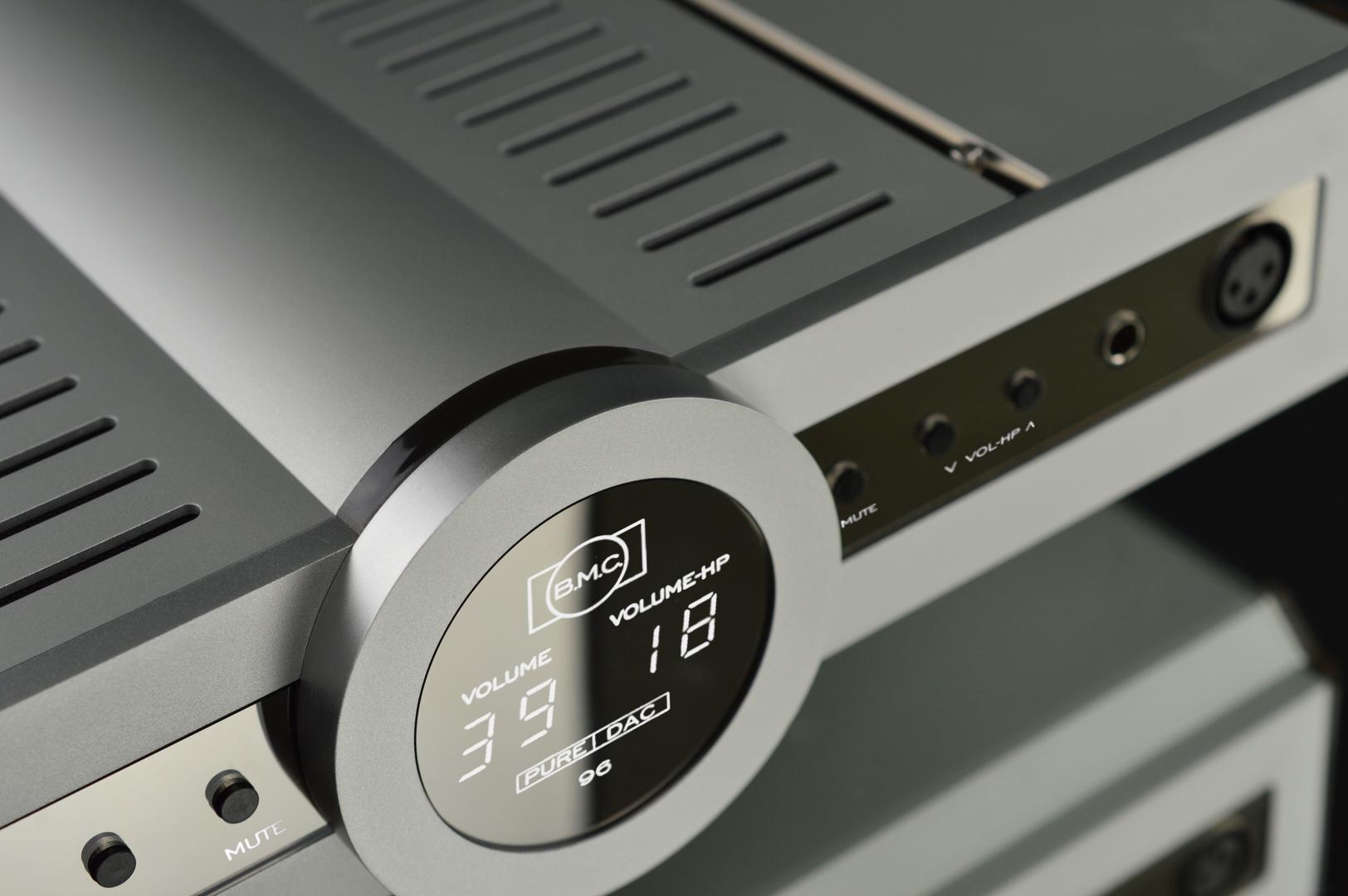 The single most interesting new product at Munich was undoubtedly the Zero 1 loudspeaker from Avantgarde Acoustics. The German company has married its core technology of horn loudspeakers with advanced new digital signal processing to create a very décor-friendly, attractive, and affordable active horn loudspeaker. Available in a wide range of colors, the Zero 1 looks from the front like a small version of the monolith in 2001, but with drivers recessed into the front surface. Standing 41” tall and nearly 20” wide, the Zero 1 is a three-way system with a 12” subwoofer operating up to 250Hz, a 5” horn-loaded midrange driver, and a 1” horn-loaded tweeter. The crossovers, implemented in the digital domain on a field-programmable gate array, have extraordinarily steep slopes—100dB per octave. The DSP also corrects any amplitude and phase errors, resulting in a perfectly smooth and time-coherent response at the listening position. The filtered bass, midrange, and treble signals are converted to analog by three BurrBrown 24-bit DACs (one per frequency band). The three analog signals then drive three power amplifiers, 400W for the woofer and 50W each for the midrange and tweeter. Note that in this architecture there are no inductors or capacitors between the amplifier’s output and the speaker’s voice coils—a major advantage. The Zero 1 is meant to be driven by a digital signal; inputs are USB, TosLink, SPDIF coaxial (x2), and AES/EBU. Analog input is an option. Avantgarde reportedly spent four years and more than one million euros developing this product. We’ll have the first English-language review of the Zero 1 later this year. No US price was announced, but expect it to be about $16,000. Remember that there’s no need for an outboard DAC or power amplifiers—just a digital source and the pair of loudspeakers. Avantgarde’s huge room was packed to capacity, so I had to settle for a quick listen standing off to the side. From what I heard, the Zero 1 is quite promising. 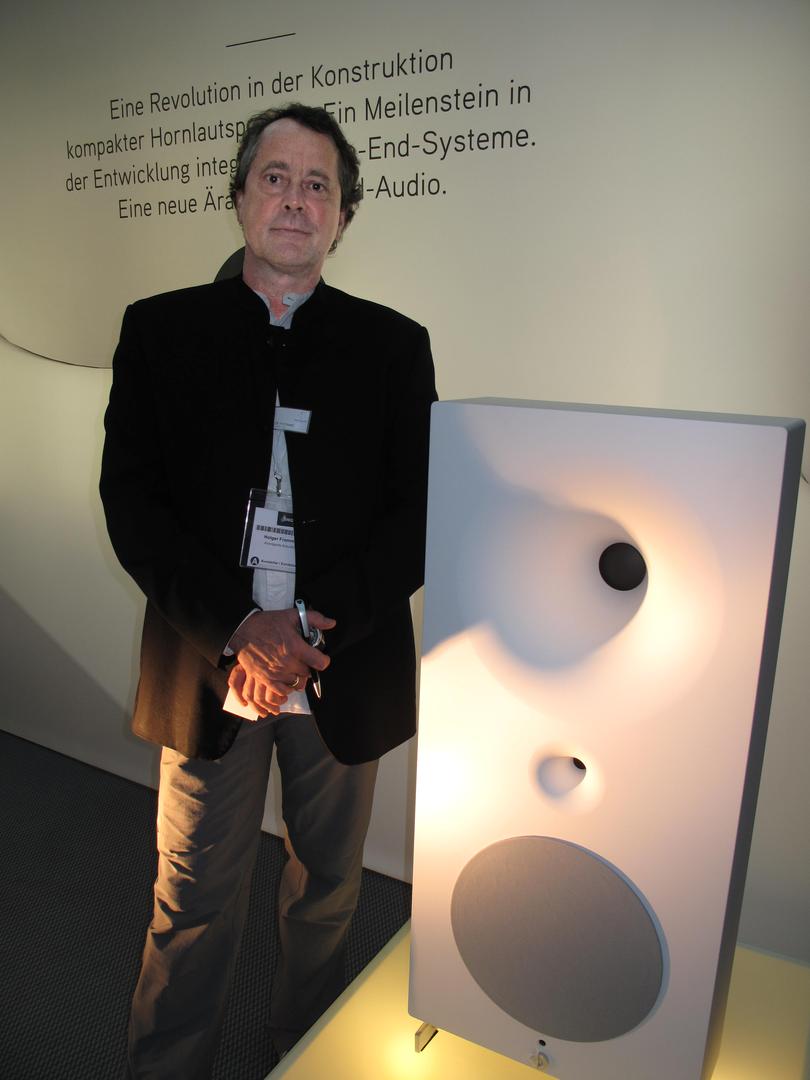 Sonus faber launched a new line of mid-priced loudspeakers called Olympica. The first three models of what will become a larger line were shown in Munich. All models in the Olympica line were designed from scratch, with no drivers or parts used from other products. All feature solid walnut wood and leather enclosures in a new asymmetrical shape that is reportedly an important design element. The enclosure shape eliminates parallel surfaces and also accommodates the new bass-reflex system developed for Olympica. The combination of walnut and leather is drop-dead gorgeous. 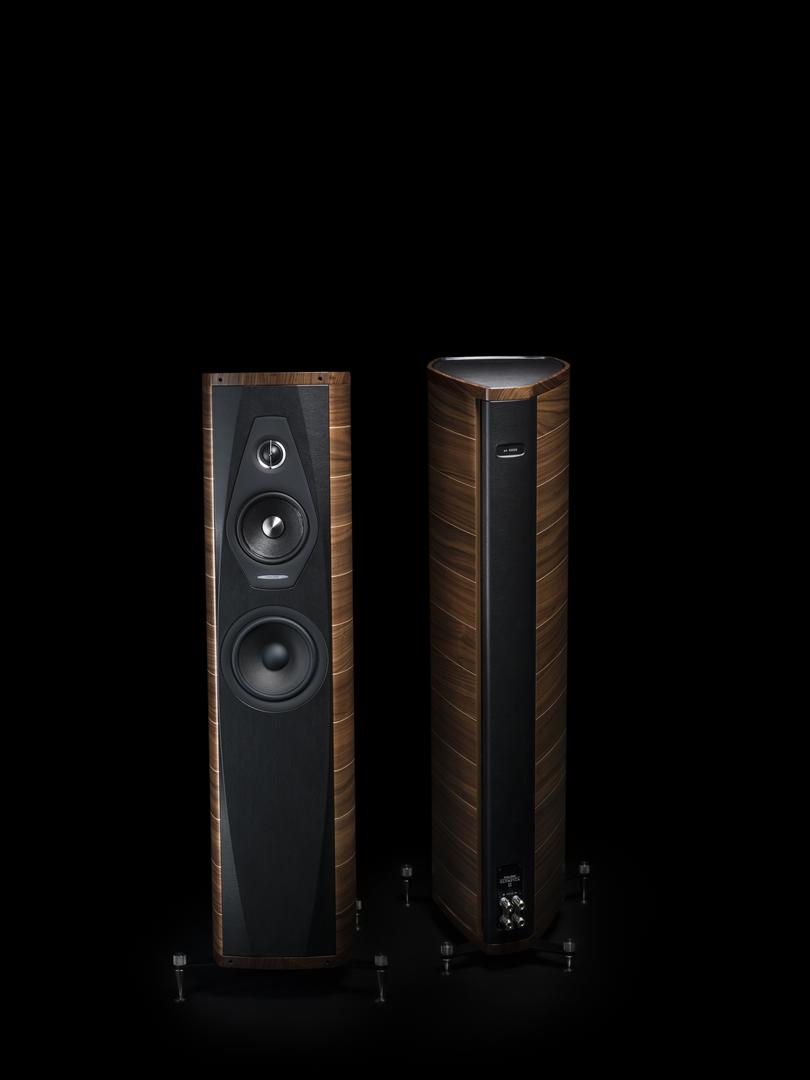 Despite hearing a wide range of products that were entirely new to me, the show’s best sounds were produced by familiar companies that have created great-sounding rooms at recent shows. The Focal Stella Utopia driven by the new Soulution 700-series electronics with support from Critical Mass Systems isolation racks and amplifier stands was stunning in its transparency, bottom-end weight and clarity, and its high resolution without treble etch. This system (but with Soulution 500-series electronics) got my vote for best sound at last year’s Rocky Mountain Audio Fest. Another great room was the Absolare Passion preamplifier and Passion 845 single-ended triode amplifiers driving Rockport Altair loudspeakers in the Absolare room. These electronics are not only glorious in the midrange and treble, but drove the Altairs in a huge room to quite high playback levels with outstanding bass extension and control. These electronics are quite special (see my review in Issue 234). The third room that stood out for me was the Raidho D1 minimonitor with the diamond-coated mid-woofer. This small loudspeaker plays big in every way; bass extension, soundstaging, and dynamics. It also exhibits a lack of coloration and purity of timbre that are world class by any measure. 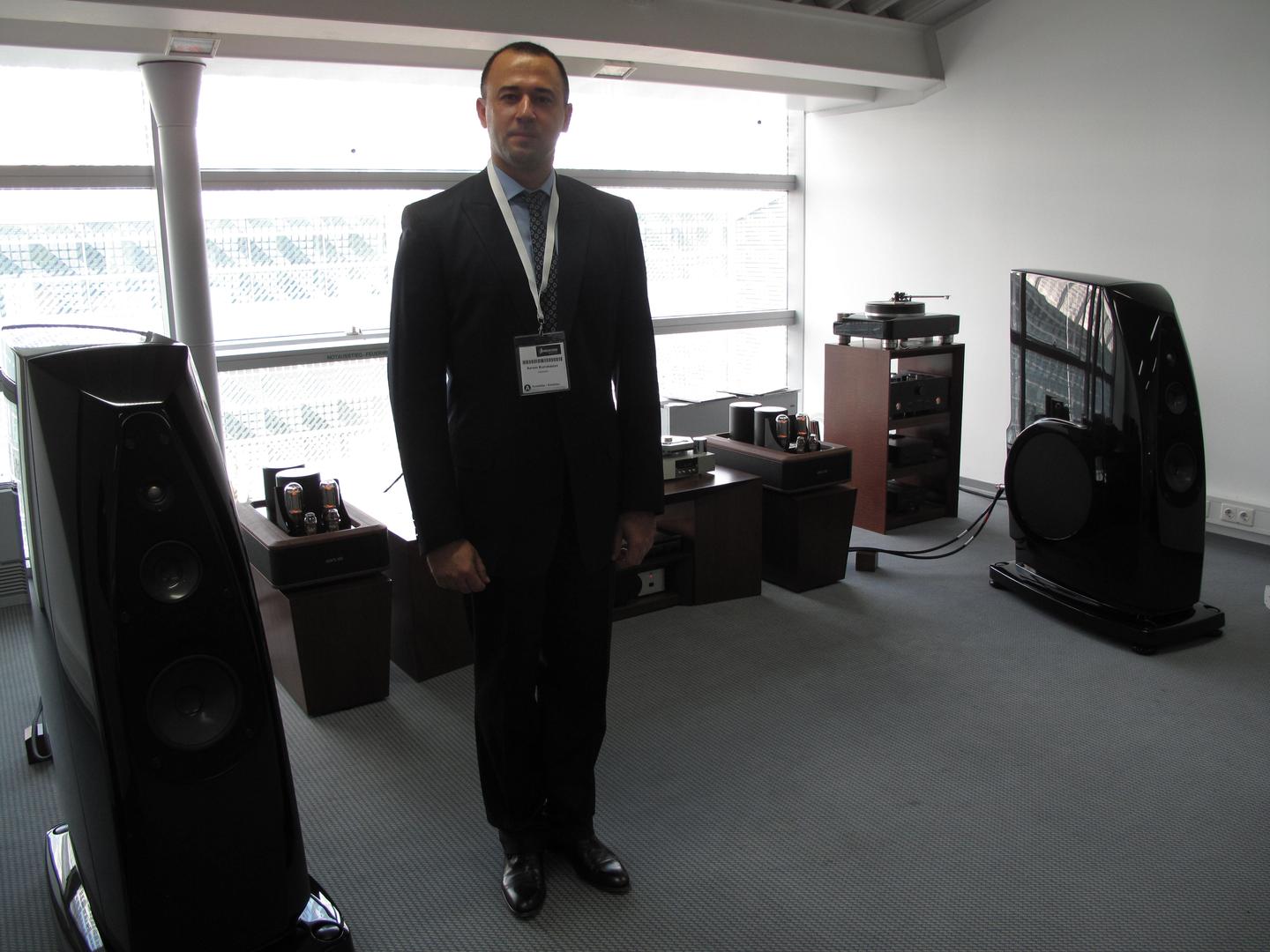