After 40 years of designing loudspeakers, Albert Von Schweikert received a dream commission: Build a custom one-off loudspeaker with no cost constraints. If Albert thought of aspects of the design or construction that would improve the sound, he had the freedom to realize that vision. The customer for this mega-speaker has owned every big Von Schweikert Audio loudspeaker over the years, but now wanted—and was willing to pay for—the ultimate in performance. This custom speaker, called the VR-111XS, would be the culmination of everything Albert had learned about loudspeaker design in his career. I live about 90 miles away from Albert’s design studio so I made the trip to see this work-in-progress mega-speaker firsthand. I also wanted to give an extended listen to VSA’s $140,000 VR-100XS that sounded so good at T.H.E. Show Newport a few months back. 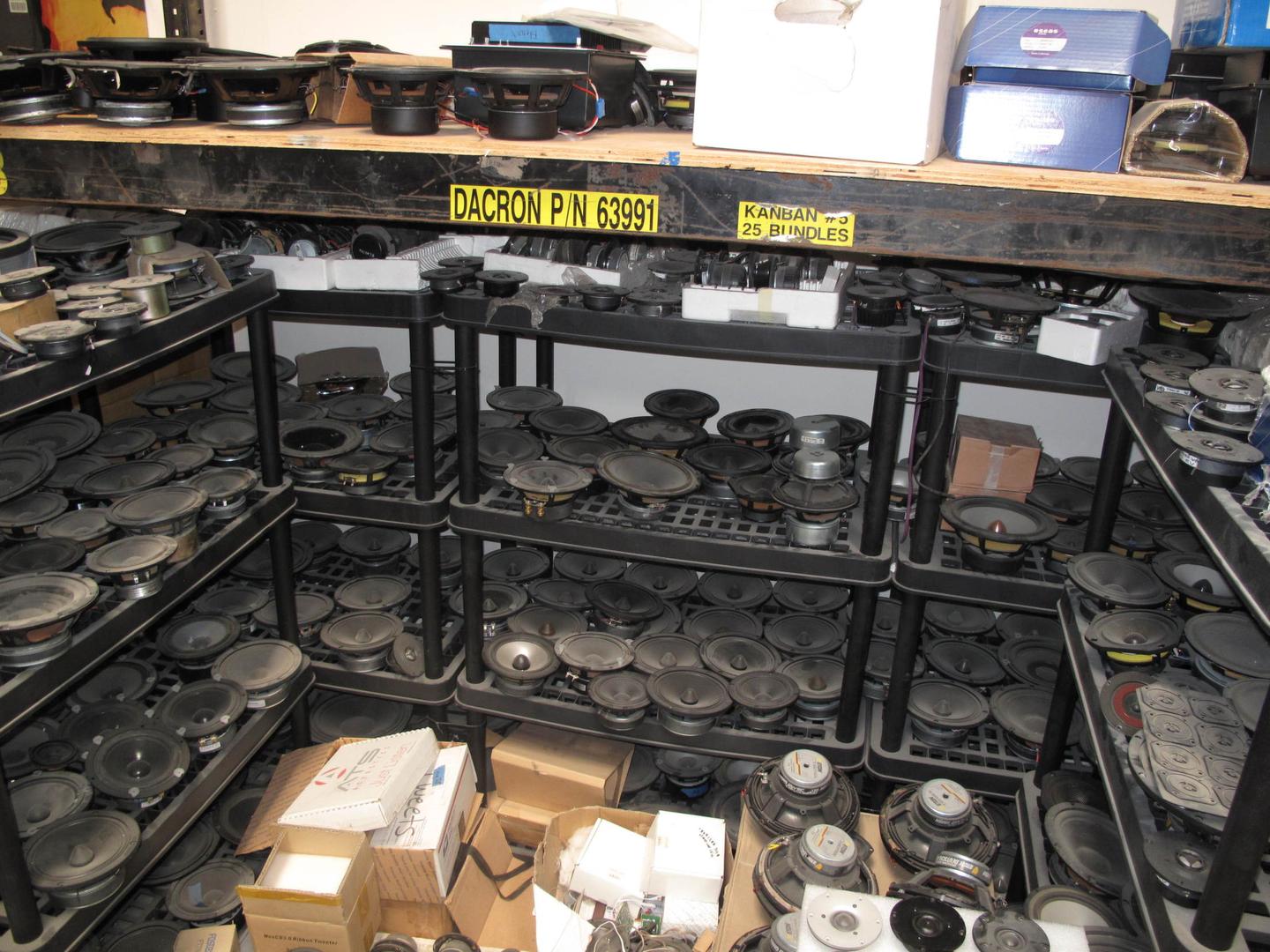 The design studio, located in an industrial park, occupies a space that’s large enough for a small factory. But this facility is used purely for design work; the VSA assembly shop is a few miles away. The huge space is a benefit when measuring loudspeakers; the bigger the room the wider the reflection-free time “window,” which extends the bandwidth over which the measurement is accurate. I saw a new VSA loudspeaker under development, the measurement station, and some customer loudspeakers awaiting updates. Albert also showed me a collection of several hundred drivers that he’s experimented with over the years, but discarded because they didn’t meet his requirements. 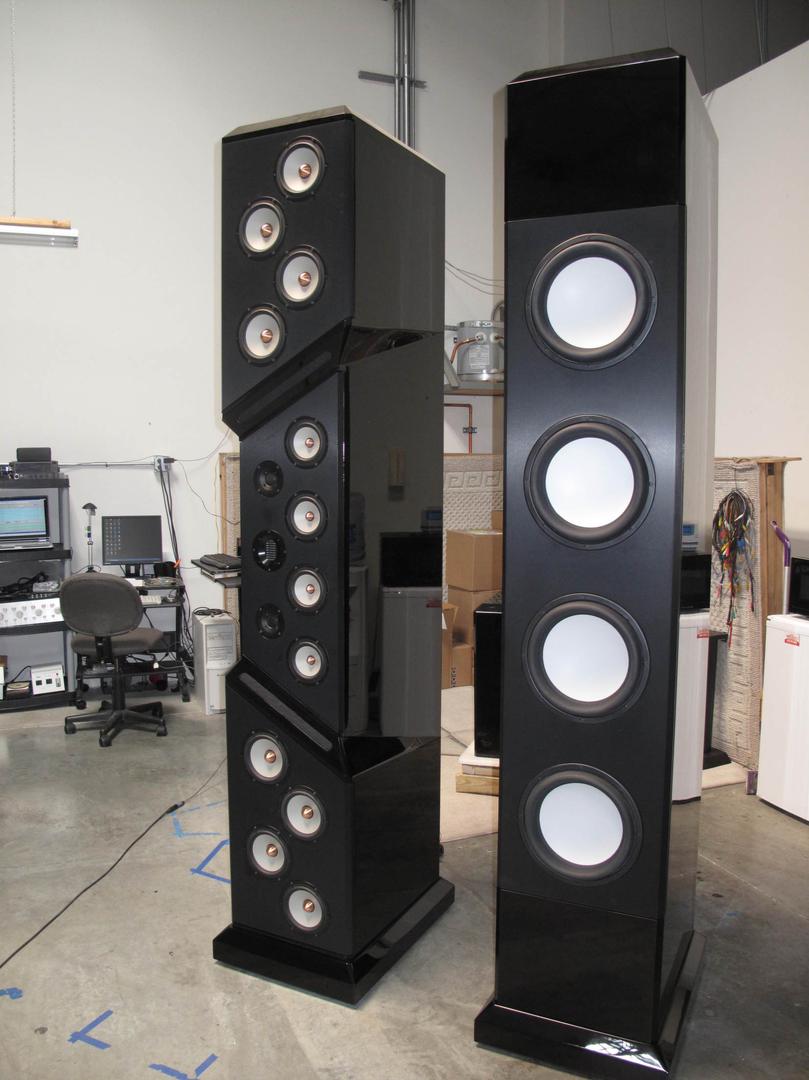 The star of the design studio was a massive four-column mega-speaker that’s been in the works for two years and is about three months from completion. One column (per side) houses four dual-coil 12″ woofers, each powered by its own integral 1000W amplifier. The woofers have a whopping 3″ of excursion (+/-1.5″). Extensive controls are built into the amplifier circuit, accessible via the column’s rear panel, so that the array’s performance can be tailored to the room. This column is reportedly flat to 10Hz. The second column features eight 7″ mid/bass drivers, four 6″ midranges, two horn-loaded magnesium-dome tweeters, and an Air Motion Transformer super-tweeter (the latter rolling in at 12kHz). The back of this column’s houses an additional pair of tweeters and AMT super-tweeter that can be adjusted in level and configured for bipolar (in-phase with the front drivers) or dipolar (out of phase with the front drivers) wavelaunch. The rear-firing tweeters are driven by an “ambience” signal extracted from the main signal fed to the loudspeaker. An external enclosure the size of a small refrigerator contains the crossover. 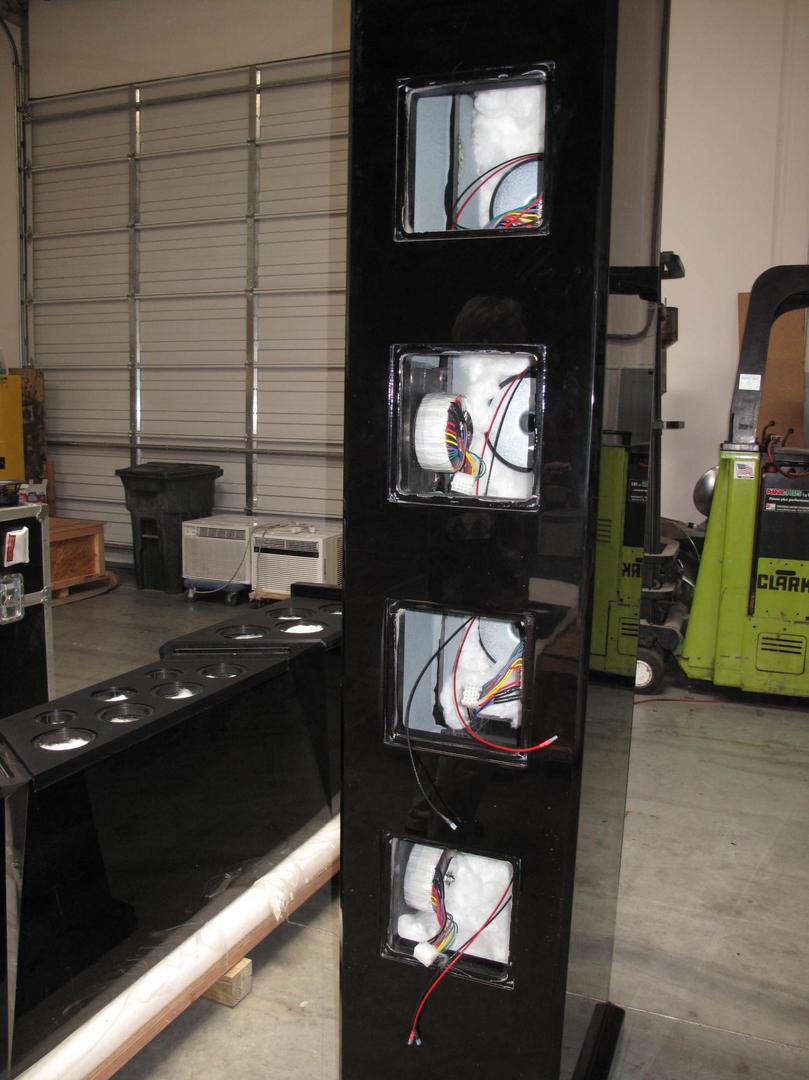 The 4″-thick, five-layer sandwich-enclosure that houses this massive driver array is unlike any I’ve encountered. The outer surface to which the drivers are mounted is a 1″-thick aluminum alloy that is bonded to a sheet of HDF (high-density fiberboard) with a damping compound used to silence submarine hulls. This damping compound is supplied in thin strips, which VSA weaves together into rope-like strings. When the entire structure is bolted together the damping compound compresses (you can see the uncompressed damping compound on the baffle in the photo, and compressed damping compound in the cabinet cross-section photo). The damping compound is so strong that once the structure has been assembled the aluminum front layer can’t be removed. The fourth layer down is a synthetic stone-like material. The final layer is a lightweight foam. The enclosure is stuffed with wool of progressively greater density toward the back of the cabinet. This stuffing reportedly completely absorbs the drivers’ back waves. 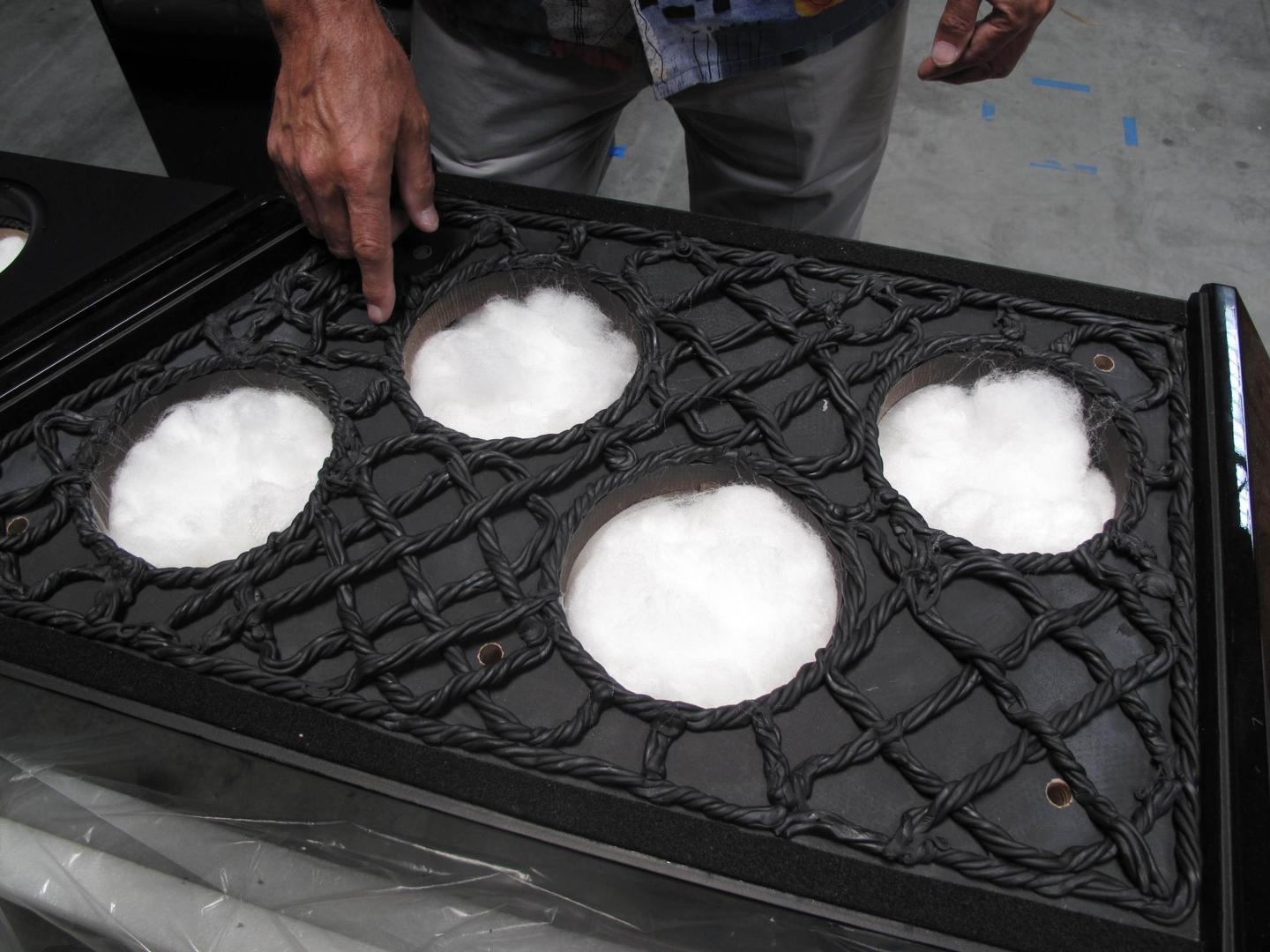 Each of the four columns weighs 1200 pounds for a total system weight of more than 2.5 tons including the external crossovers.

I obviously wasn’t able to hear this work-in-progress, but I did have some time with the VR-100XS, Von Schweikert’s production flagship driven by Constellation Virgo II preamplifier and Centaur stereo power amplifier. The “XS” in the model name signifies that the system employs external subwoofers, in this case two 12″ units (although only one was used in my demo). The room was quite small, which made the system’s bass performance all the more remarkable. Rather than use conventional external subwoofers, Von Schweikert drives the pair of external 12″ drivers below 40Hz with a signal fed from the main speakers that has been processed to take into account the effect of the main speakers’ back-EMF. He calls these external bass drivers, which are designed to be positioned behind the listening seat, “pressure equalizers.” The idea is to create smooth bass response without the usual room-induced peaks and dips. 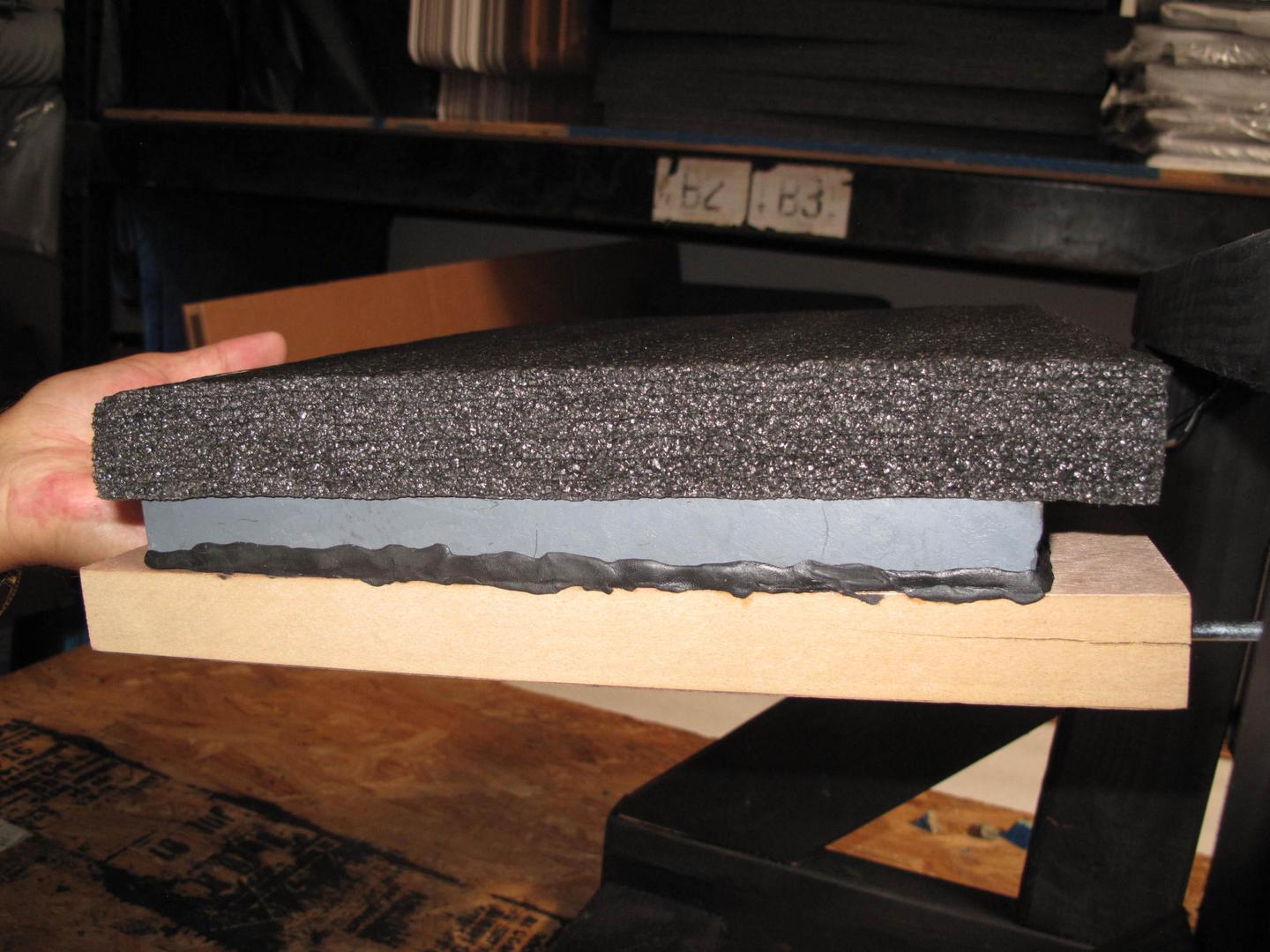 The sonic result was remarkably extended and powerful bass but without the thickness and bloat you hear when a room is overloaded. One of my reference discs for bass performance is Part III by Joey DeFrancesco, which features his amazing pedal work on the Hammond B3. Pitches were clearly articulated, and the bottom end didn’t congeal into a roar as it does in many systems. It was particularly remarkable considering that the VR-100XS reproduced the instrument with a full measure of weight but without a trace of thickness or room-induced coloration. Orchestral dynamics were sensational in their suddenness of attack and equally sudden decay. Acoustic bass lines in jazz were phenomenal in their pitch and dynamic articulation. (This bass performance would’ve been even better in a larger room and with two pressure equalizers rather than the single one used in the demo—two pressure equalizers are supplied with the VR-100XS.) Incidentally, VSA has applied for seven patents on the design techniques developed for the VR-100XS, including the pressure equalizers. 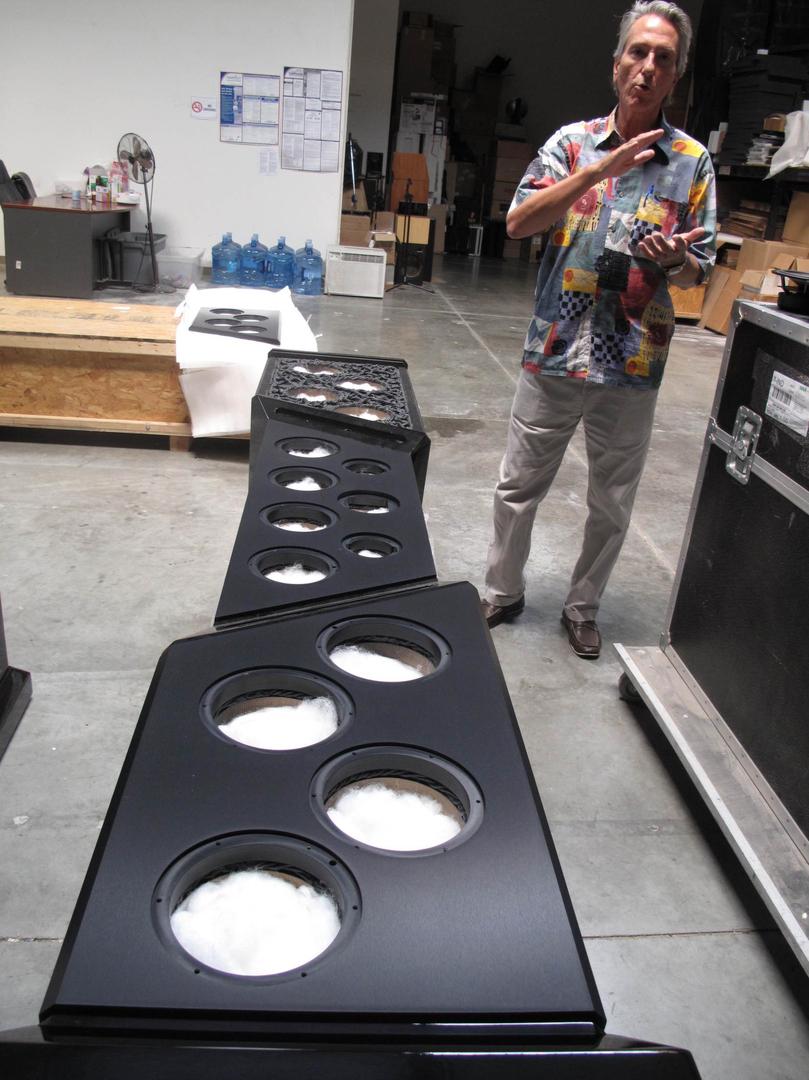 The sense of immediacy in the midband was palpable, largely because of the density of tone color and absence of distortion through the mids, along with the superb transient reproduction. Drums, acoustic guitar, and percussion all had a dynamic verve that made them sound more realistic. The top end was extended and airy with plenty of sparkle. Note that the ribbon tweeter’s output can be adjusted in 0.25dB steps. Rather than use a potentiometer or switched-resistor network, the VR-100XS employs an expensive Fostex autoformer from Japan, which offers 11 level settings plus a multiplier, for 22 possible tweeter levels. The soundstage was also impressive, and had the ability to dramatically change in size and scale depending on the recording. On a small-scale intimate acoustic trio recording, the VR-100XS’s massive bulk seemed to vanish; the speaker sounded like a mini-monitor. Conversely, the speaker reproduced orchestral music with an expansive soundstage and wide dynamic contrasts. It’s not easy for a big speaker to sound small when called for, but the VR-100XS did a disappearing act no matter what the music. 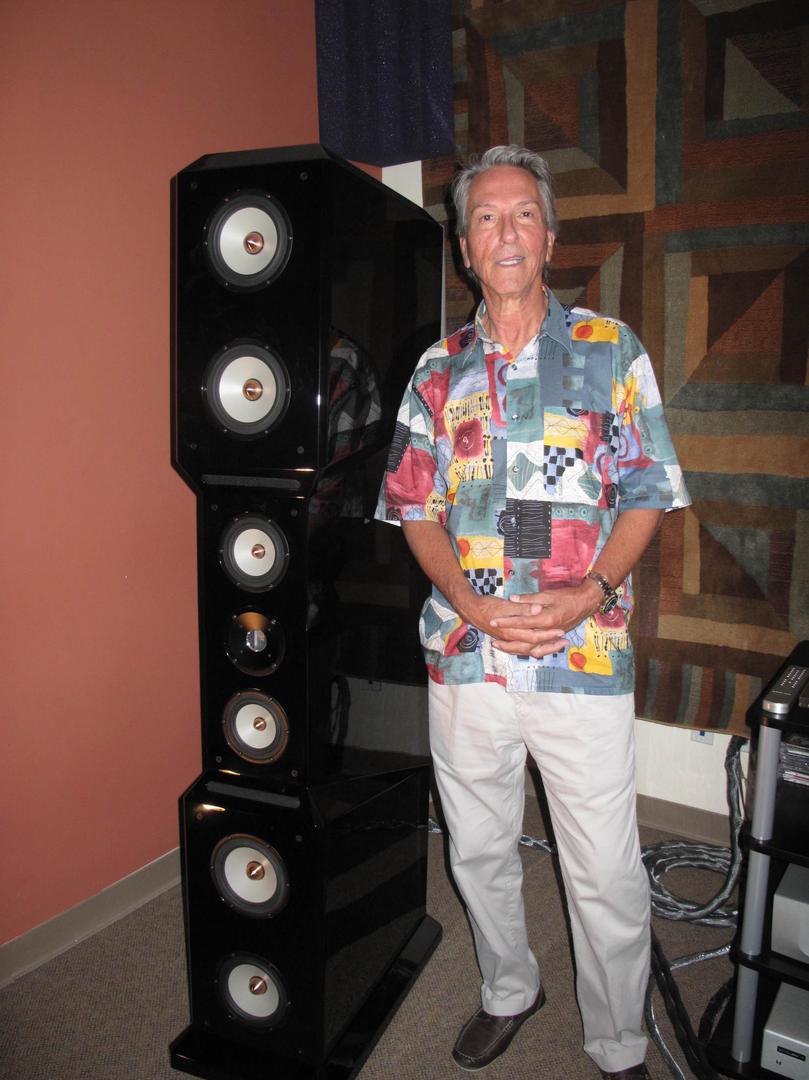 Overall, the VR-100XS is a loudspeaker of the first rank, but its ability to deliver a full measure of bass weight without bloat or loss of articulation in a small room is unique in my experience.

From the Editor: Summary Judgment

In this issue’s Letters column, reader Barney Vincelette laments the […]

Can you hear the difference in Synergisitc Research’s UEF Linear Power Supply?

On April 18th the high-end audio community lost one of […]

Derek Hughes has worked in the audio industry for over […]