Robert Harley on Digital and Electronics Under $15k

MQA Streaming on Tidal
The big news from CES was Tidal’s long-awaited announcement that it was finally streaming files in the MQA format. About 30,000 titles are expected over the next few months. If you have a Tidal HiFi subscription, you now have access to MQA under the “Master” moniker (MQA is available only on the desktop app at the moment, not on mobile or embedded apps). Better yet, Tidal includes an MQA decoder that will “unwrap” the file and send the 88kHz or 96kHz audio stream to your DAC (the Tidal decoder is limited to 96kHz). You won’t get all the benefits of a full MQA decoder implementation in a DAC, but the sound quality is significantly better than with no decoding (I’m listening to MQA via Tidal as I write this).

At a press conference, the Digital Entertainment Group announced that several other streaming services would offer “hi-res” streaming (including Pandora, HDtracks, Napster/Rhapsody). High-level executives from major record labels also stated their support for hi-res streaming, but inexplicably there was no mention of MQA and no opportunity for Q&A. I later learned that all these services will offer MQA streaming later this year. The MQA floodgates appear to have opened. 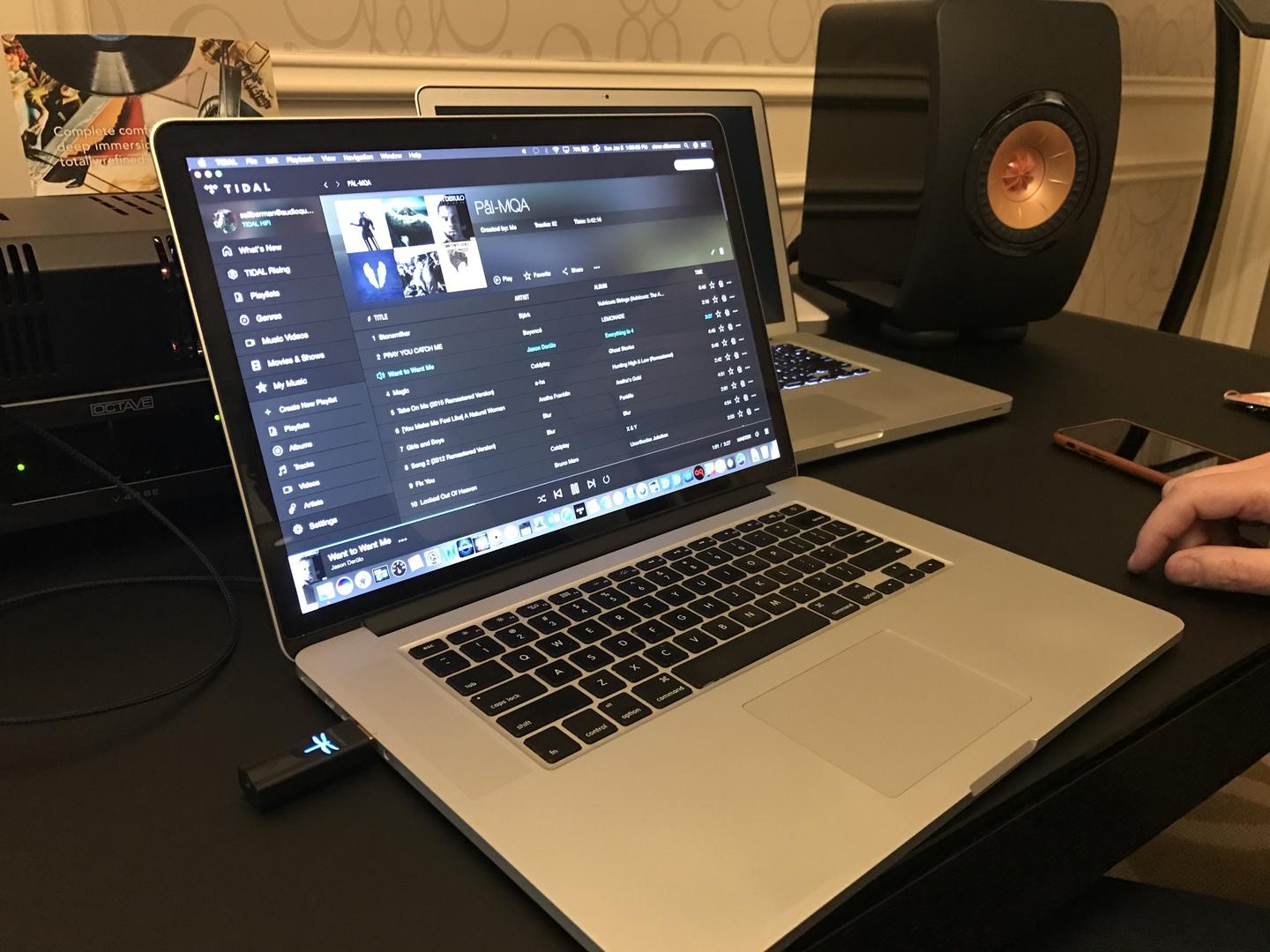 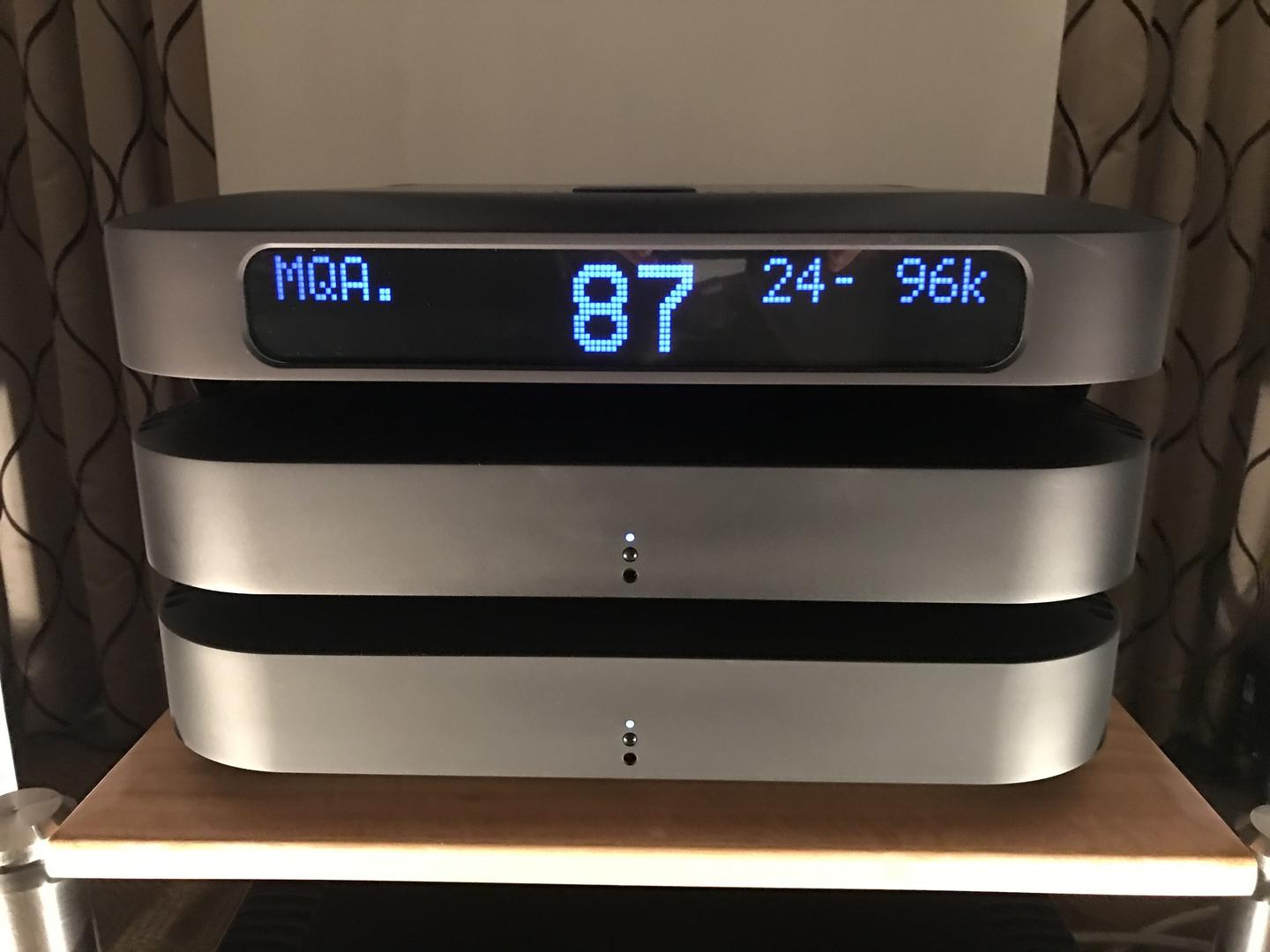 MSB Select DAC
MSB demonstrated the MQA upgrade to the company’s flagship Select DAC. The upgrade consists of a hardware module ($3995) that plugs into the Select’s open architecture, along with a software update. The hardware module also improves the performance of all USB sources. At the front of an outstanding-sounding system of MSB’s own amplifiers and YG speakers, the paired comparisons of MQA and non-MQA versions of the same music were stark. 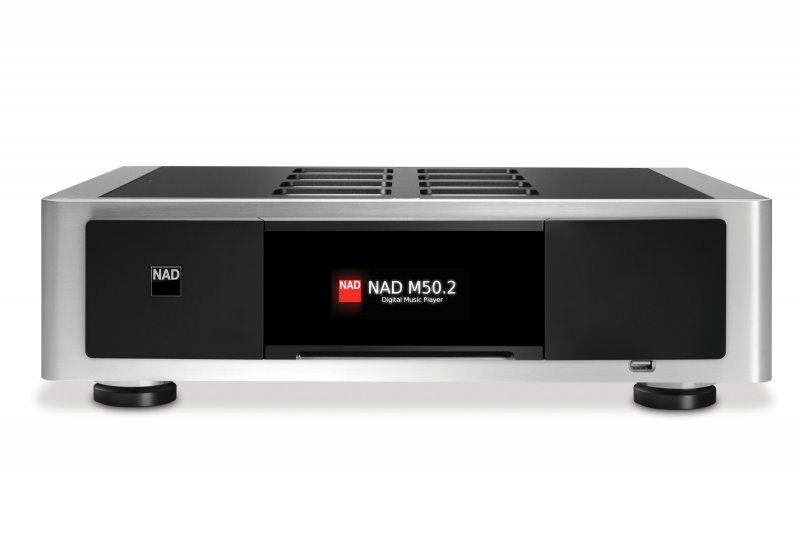 NAD Masters M50.2 Digital Music Player
NAD announced the MQA-compatible Masters M50.2 Digital Music Player ($3995), a networked digital player that allows you to access music from a wide range of sources (ripped CDs, a NAS drive, streamed music from Tidal, Spotify and other services) and play that music through any other BluOS-enabled components in your home. You’ll still need a DAC: the M50.2 has only digital outputs. 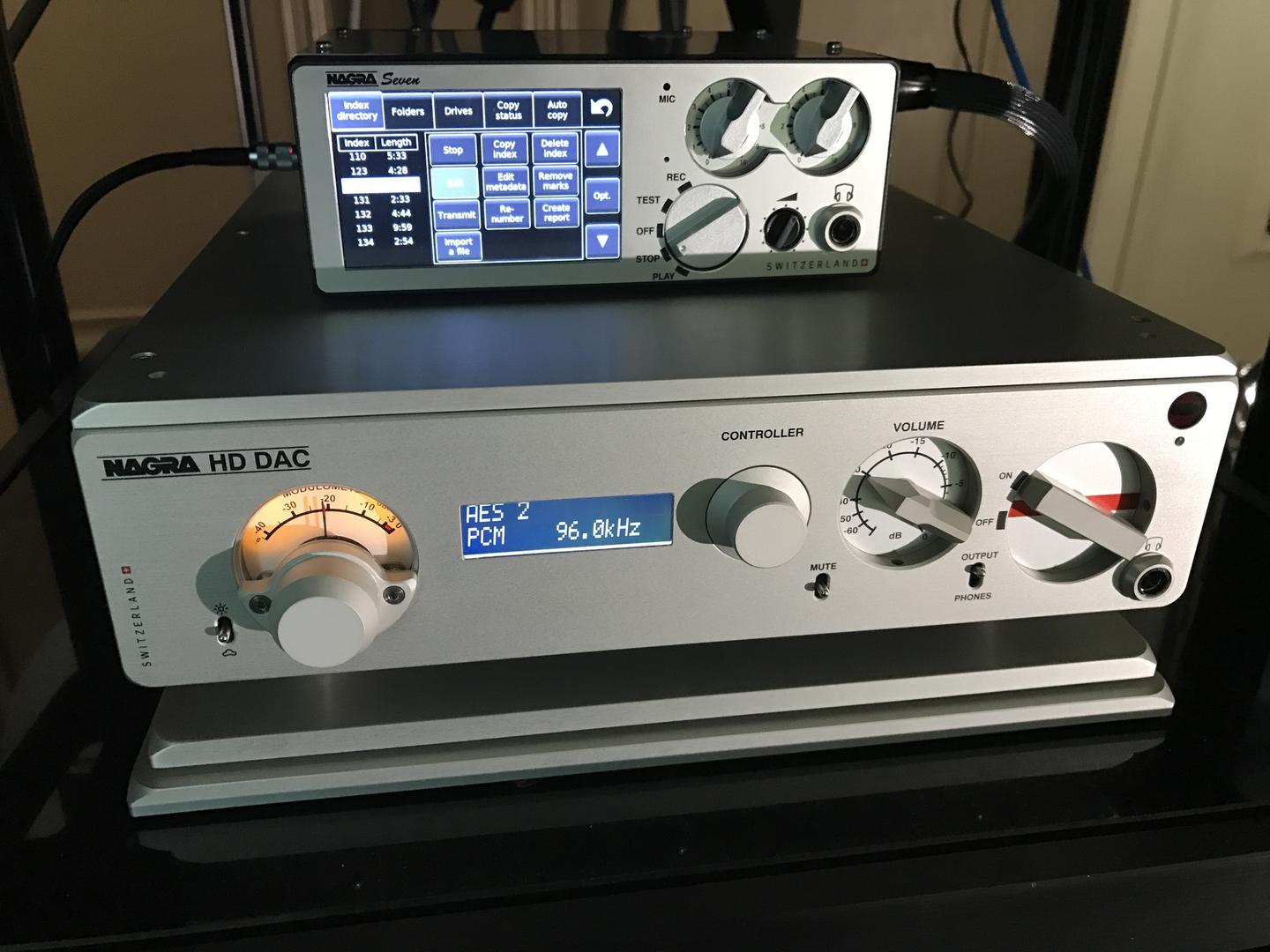 Nagra HD DAC and Classic DAC
Although not new at this show, I was greatly impressed by the sound, technology, and build-quality of Nagra’s Classic DAC ($14k) and HD DAC ($30k). The two units share identical digital sections; the difference is that the Classic has a solid-state output stage while the HD DAC features a tube output stage with a special inter-stage transformer built by Nagra. The DACs are a product of digital guru Andreas Koch’s expertise and Nagra’s long experience with analog circuits and power supplies. Each is powered by a whopping 25 separate power-supply stages. The HD DAC in Nagra’s system with Wilson Alexx speakers sounded as analog-like as any digital I’ve heard, and the Classic DAC in a different system with Nagra’s Classic Preamplifier and Classic Amplifiers driving YG speakers was one of the show’s highlights. 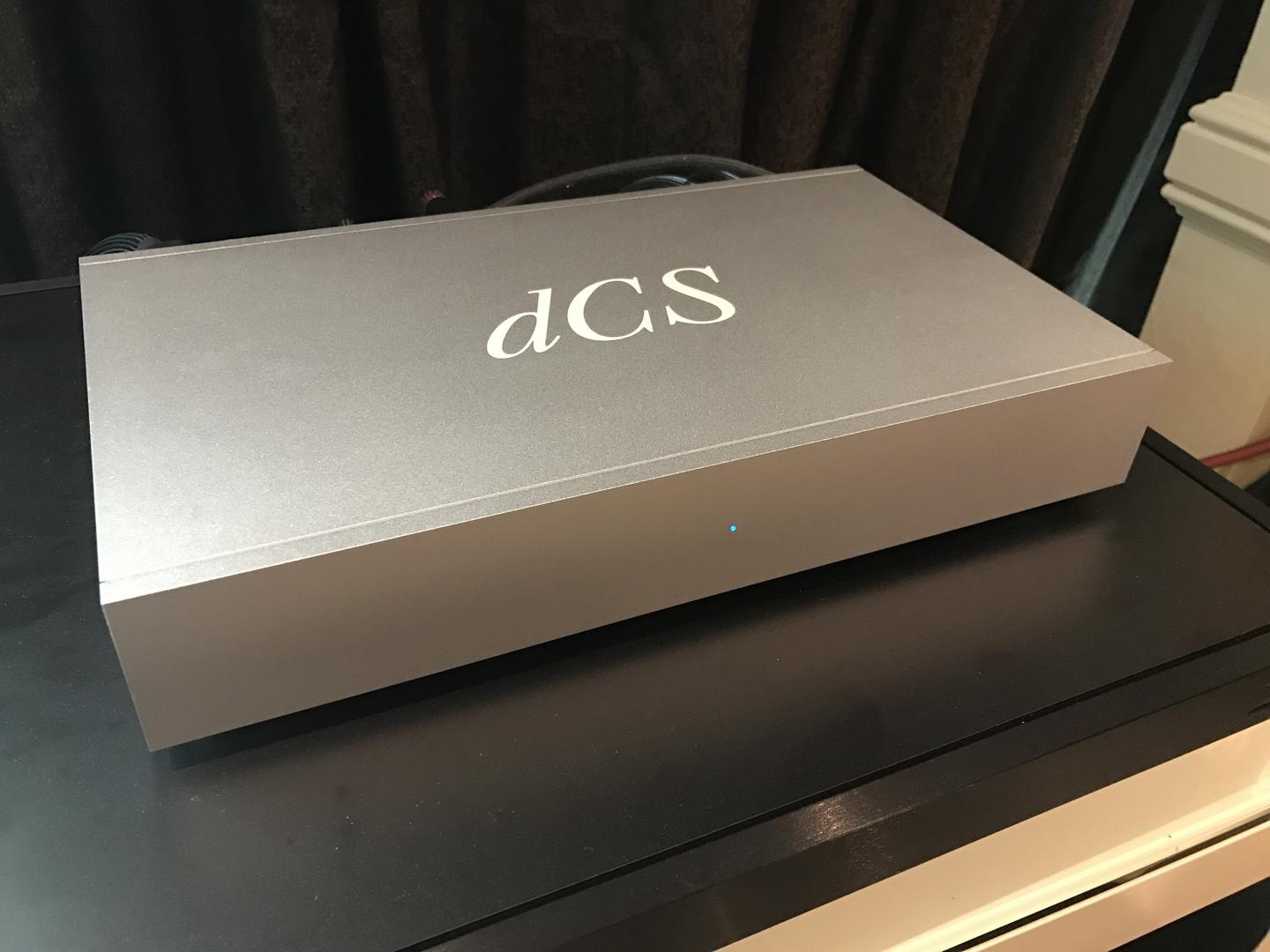 If you want to add network capability to your DAC, dCS has just the product: the Network Bridge. This $4250 device, derived from the company’s Vivaldi and Rossini, turns your non-networked DAC into a wireless streamer, offers a USB input for local sources, has clock inputs and outputs, is Roon-ready, and comes with dCS’s music-management app. 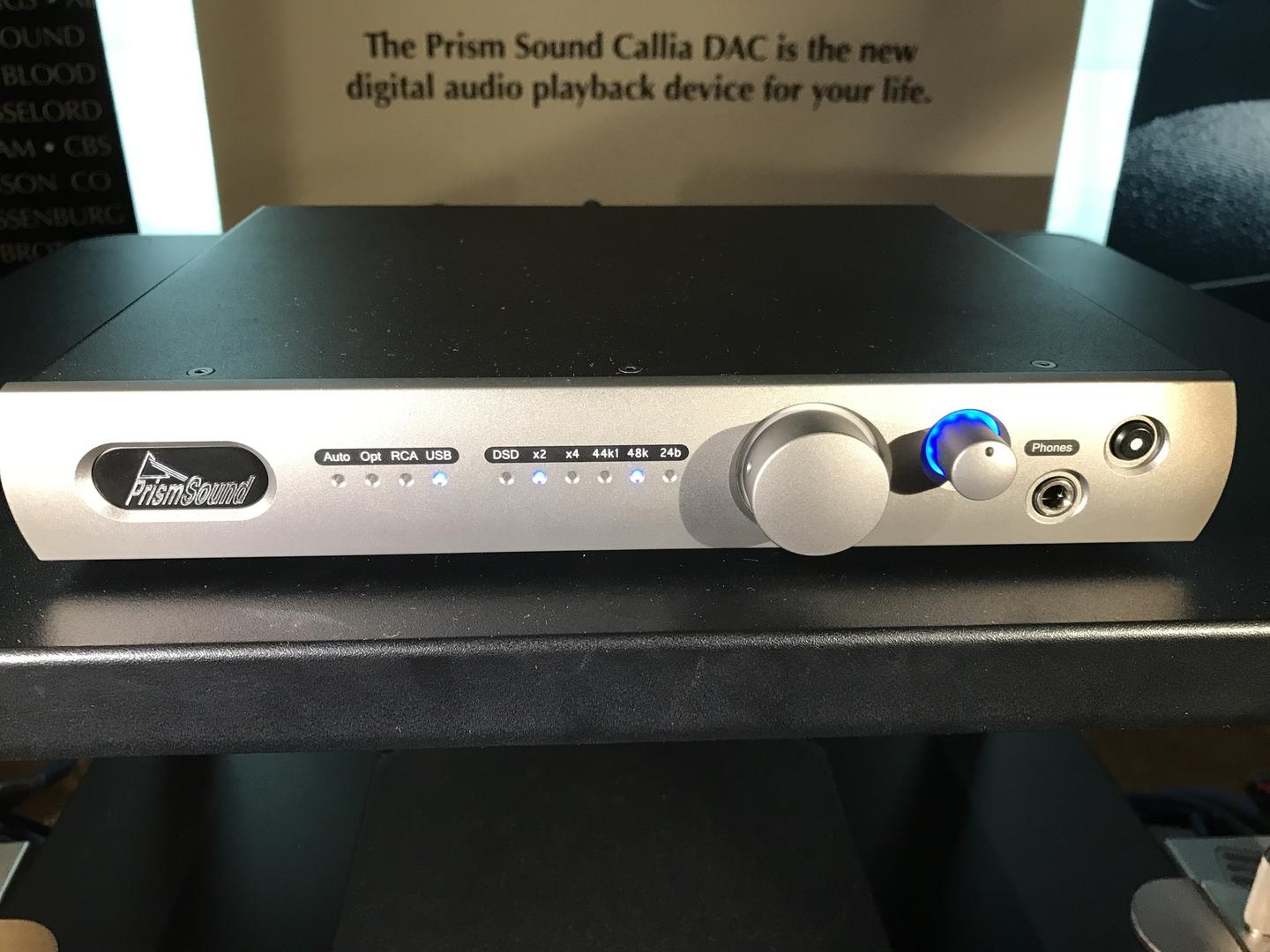 The British professional audio manufacturer Prism Sound, who has for more than 25 years specialized in making analog-to-digital and digital-to-analog converters, entered the hi-fi market with the new Callia DAC and headphone amplifier. The Callia will handle any PCM format as well as DSD up to DSD128. The headphone amplifier has three gain settings to optimize the volume control for any headphone. Price: $2750. 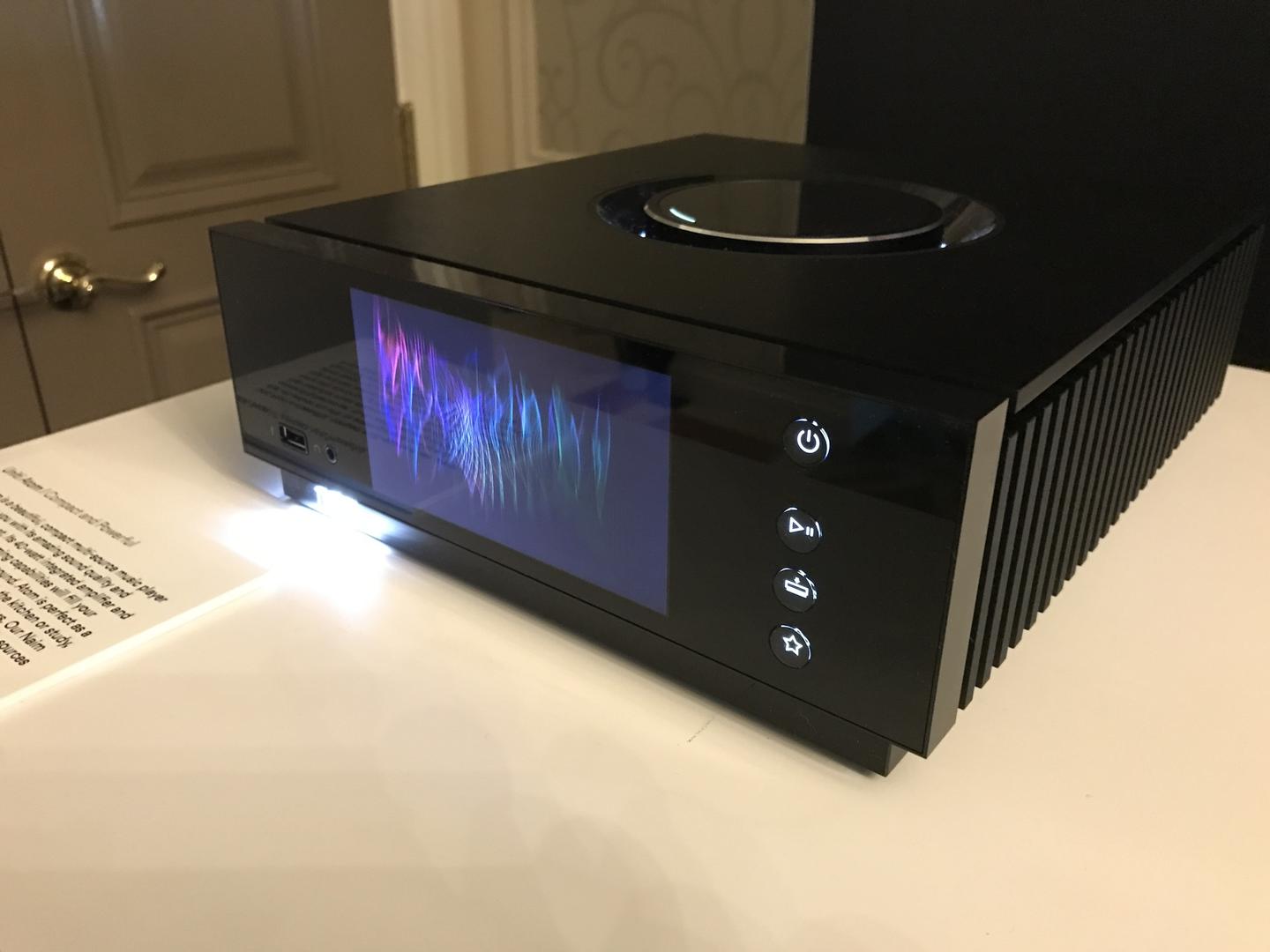 Naim Uniti Series
Naim unveiled three new products in the Uniti series that combine Naim’s sound quality with an all-in-one multi-source streaming music player. The entry-level Uniti Atom ($2995) offers an array of digital inputs and file-formats, and delivers 40Wpc. The Uniti Star (price TBD) ups the power output to 70Wpc and adds a CD drive for playing or ripping to a network-attached storage device. The top-of-the-line Uniti Nova (price TBD) features upgraded amplification and 80Wpc. The Uniti products can be controlled via the front panel’s full-color LCD display or through Naim’s music-management app. The Uniti can handle AirPlay, Tidal, Spotify, Google Cast, Bluetooth, and many more connection options. All three are designed to partner with Naim’s Uniti Core ($2495) network server and its integral CD ripping and file storage (up to 8GB of SSD or HDD). The build-quality appears first-rate, but the coolest thing about these new products in the large illuminated volume control taken right from Naim’s $265,000 Statement electronics. 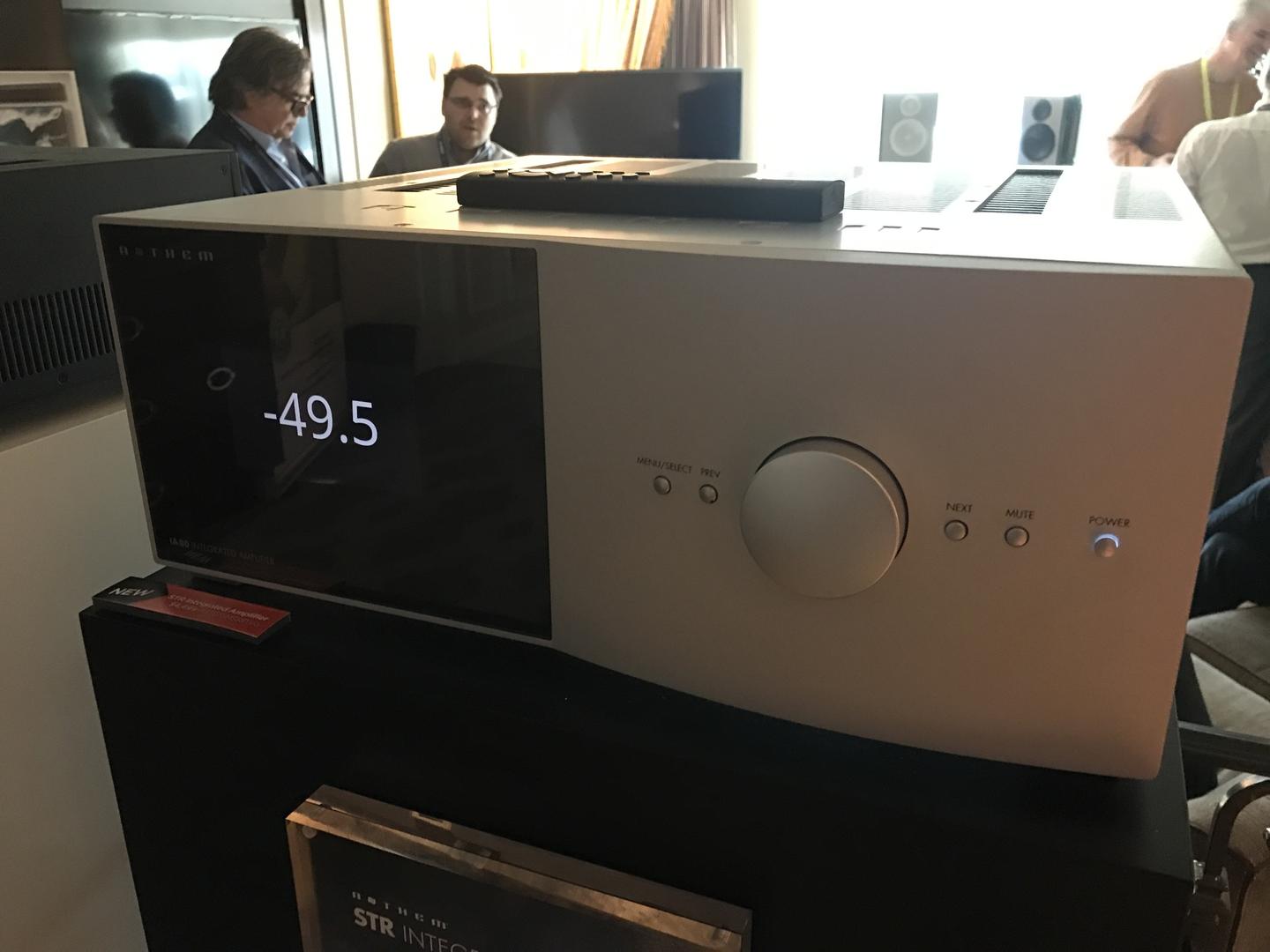 Anthem STR Integrated Amplifier
Anthem, best known for creating multichannel products, has made a major commitment to two-channel audio with the new STR integrated. This 200Wpc unit is packed with innovative features rarely found in the category. These include Anthem’s acclaimed Anthem Room Correction, bass management functions with dual subwoofer outputs (mono or stereo), and optional control via Ethernet or RS232. The STR is packed with an integral phonostage offering both mm and mc inputs, an Analog Direct mode, and a DAC section that can handle every format including DSD256. Judging from the power-output specs, the STR has a robust output stage; it is rated at 600Wpc into 2 ohms continuous. Finally, the industrial design is extremely elegant, set off by a large TFT display. The STR’s technology and casework are the foundation of other high-end two-channel products to come, including a preamp and power amplifier. Price: $4499.

NAD C 338, C 368, and 388 Integrated Amplifiers
NAD’s latest amplifier line incorporates wireless network connectivity and streaming DACs. The 50Wpc entry-level C 338 ($649) features an integral DAC and moving-magnet phonostage. The C 368 ($899) offers 80Wpc. The top-of-the-line C 388 offers increased power output of 150Wpc. All are based on NAD’s Hybrid Digital Amplifier technology. The top two models feature the company’s Modular Design Construction that allows you to configure the unit for your particular needs and to accommodate future hardware upgrades. Adding the optional BluOS Module to the C 368 or C 388 provides instant access to a local area network via Wi-Fi or wired Ethernet connection and adds hi-res streaming, including MQA (BluOS was one of the first MQA licensees). 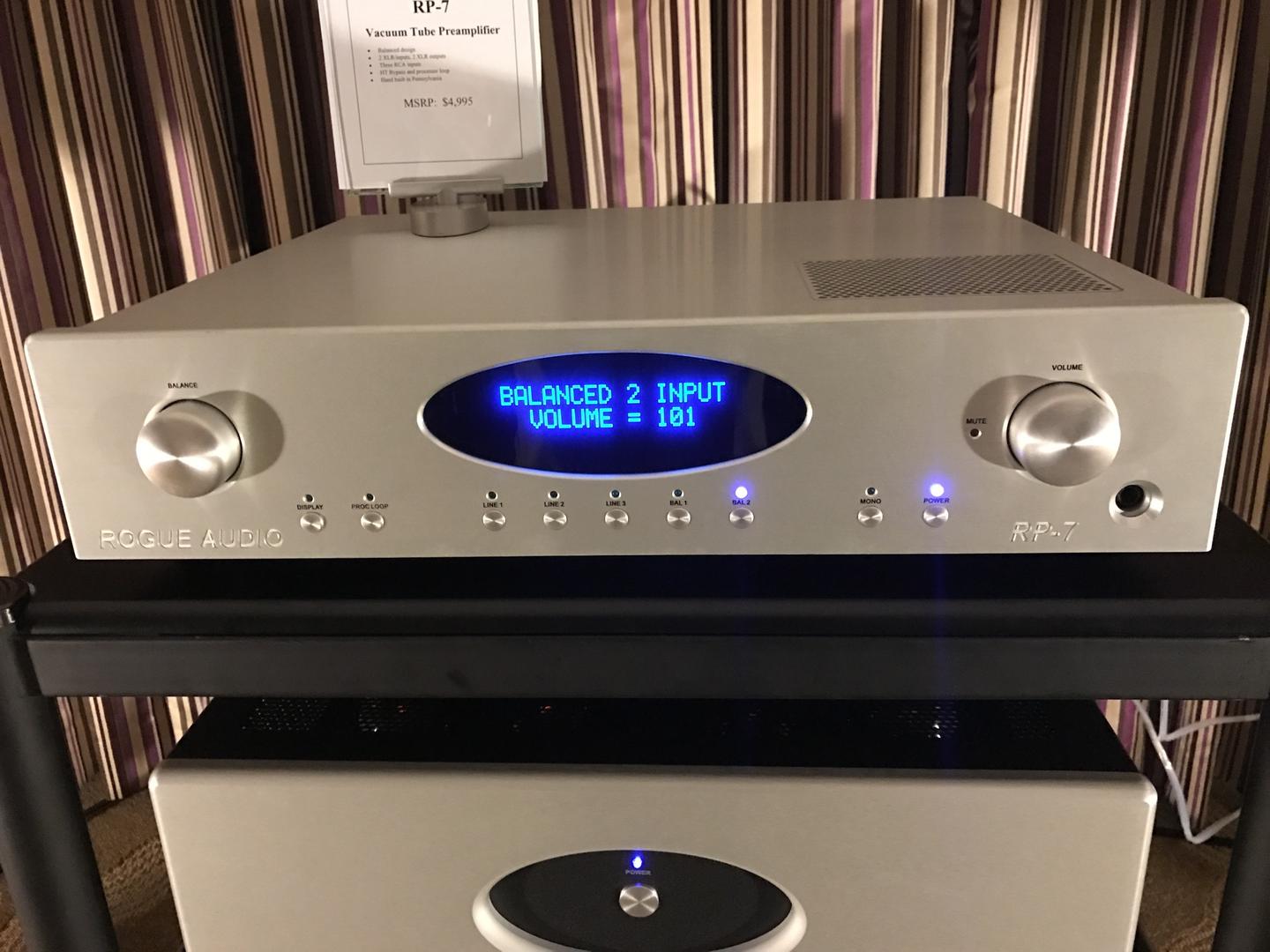 Rogue RP-7 Tube Preamplifier
Rogue Audio, known for making great-sounding and affordable tube gear, introduced a new top-level preamp, the $4995 RP-7. Features include three unbalanced and two balanced inputs, a stepped attenuator, Mundorf caps, a theater-bypass, OLED display, headphone output, and full-featured remote control. The optional phonostage has selectable gain for moving-magnet or moving-coil cartridges. The circuit is based on two AU7 tubes per channel. This new model also debuts a new hardware and software platform for future Rogue products. As always with Rogue, the RP-7 looks like a lot of performance for the money. 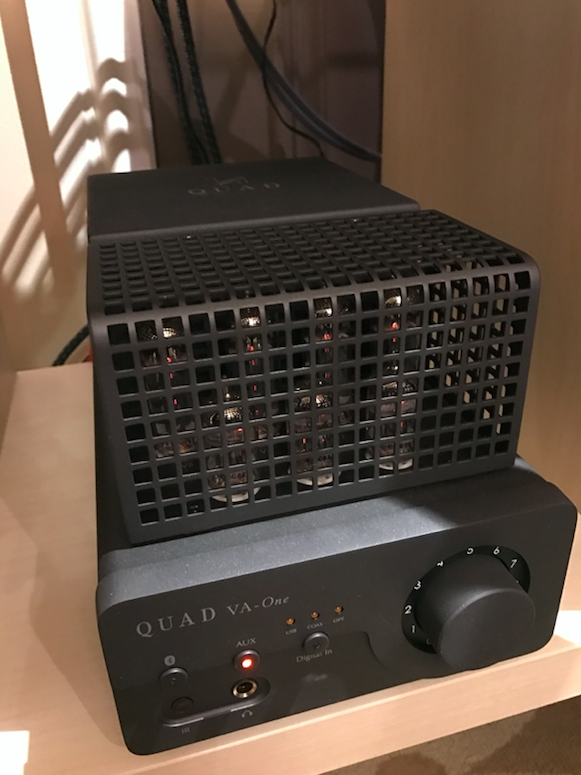 Quad VA-One Integrated Amplifier
MoFi Distribution showcased the VA-One, a tube integrated amplifier from Quad. The all-tube model is based on a pair of EL84 output tubes that can deliver 15Wpc. The product includes an integral DAC along with aptX Bluetooth connectivity (and wired analog and digital inputs). A motorized volume control and remote control round out the $1595 VA-One.

British manufacturer Musical Fidelity has finally found a home in the U.S. via distributor Audio Plus Services. Musical Fidelity has made some great products but on-again/off-again distribution has limited the brand’s reach in the States. The year’s CES exhibit showed Musical Fidelity’s vast array of products, from miniature entry-level headphone amplifiers to mega-sized monoblocks. Unfortunately, the distributor arrangement was so new that no information was available on any of the products. 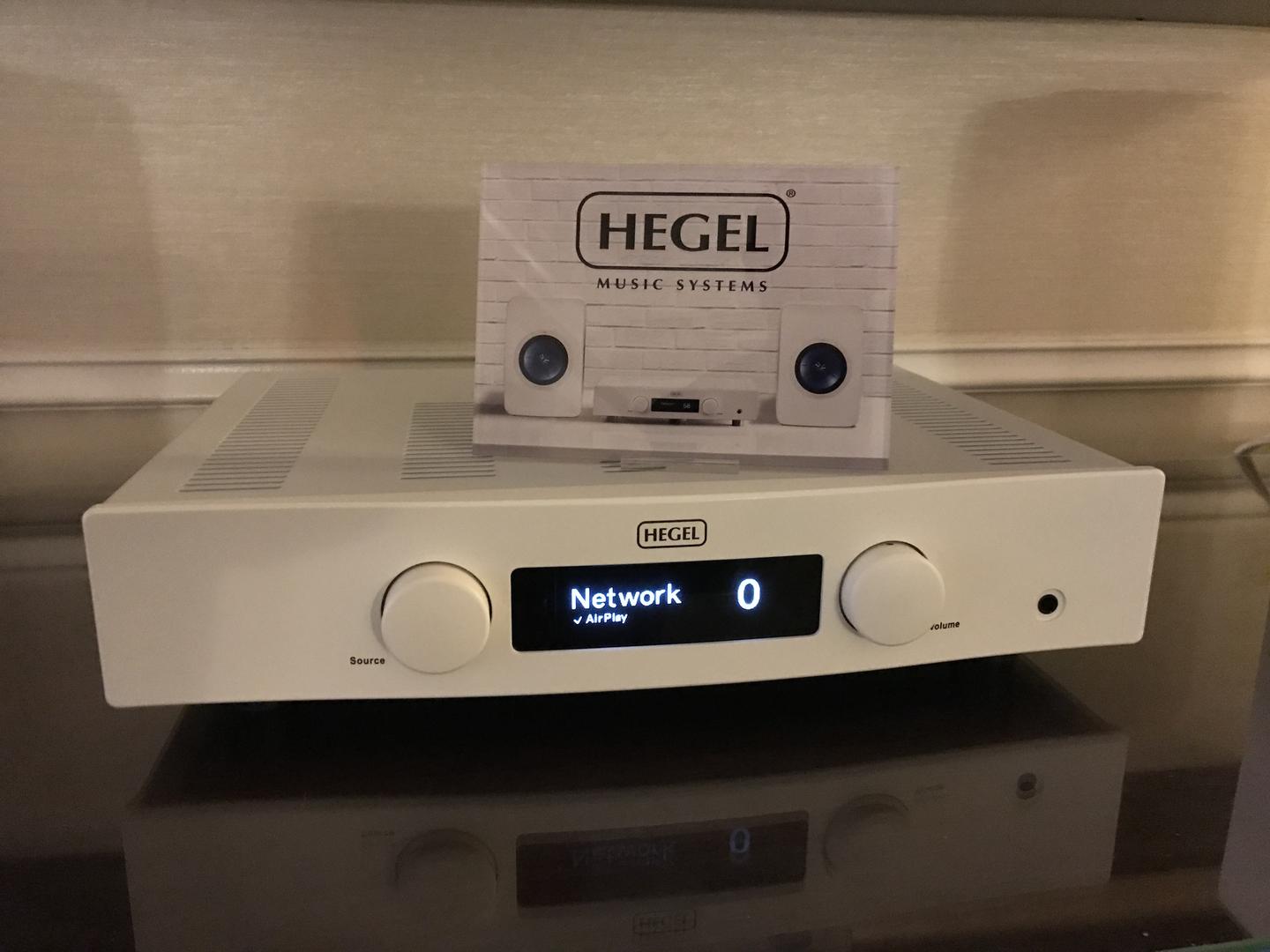 Although not new at this show, Hegel showed the Röst a 75Wpc integrated that features a newly improved implementation of Hegel’s innovative SoundEngine distortion-reducing technique. The Röst offers extensive connectivity, including a network port. Unlike Hegel’s other products, the Röst is offered in an elegant white finish. It sounded superb driving KEF LS50s. Price: $2995. 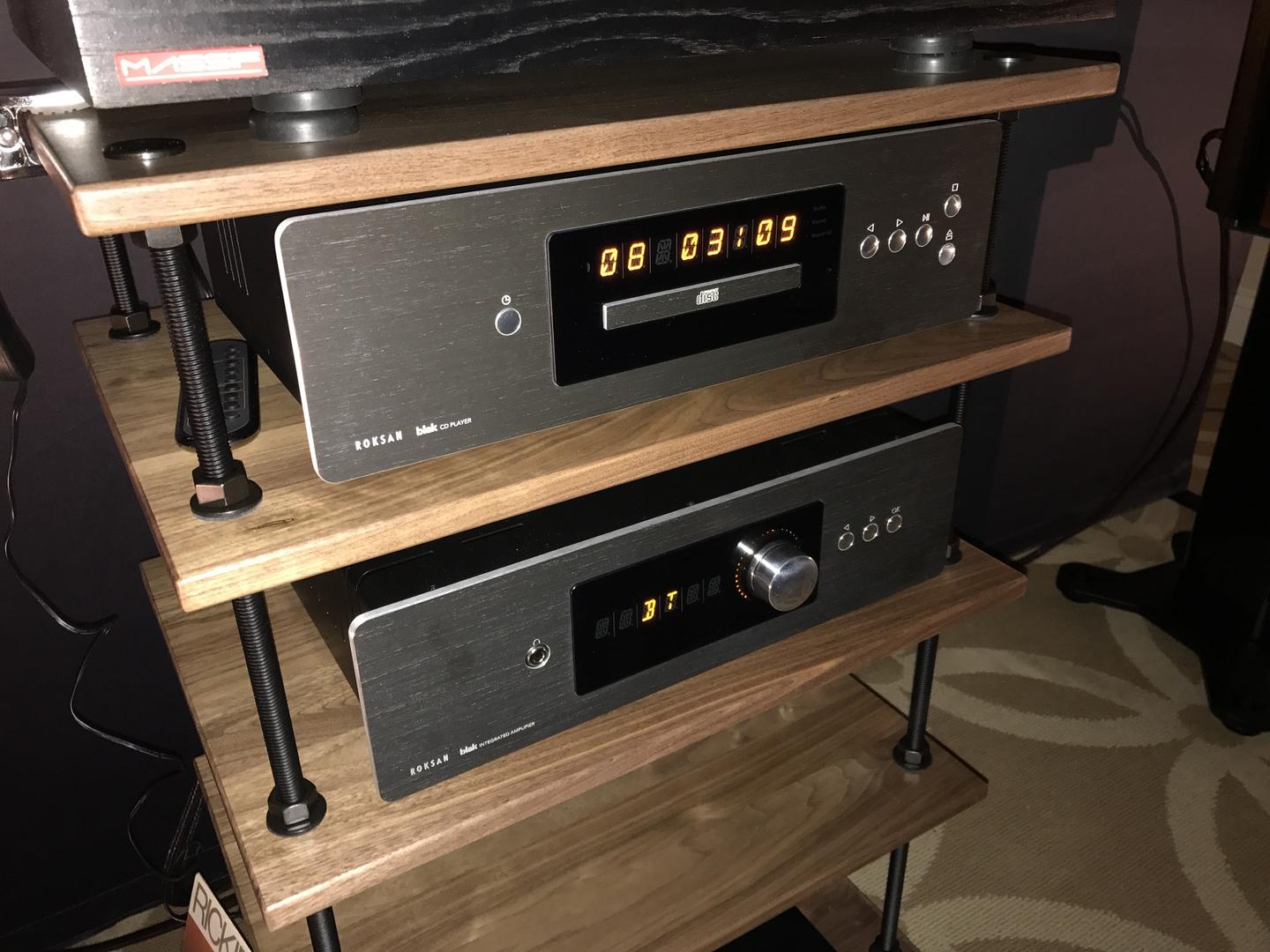 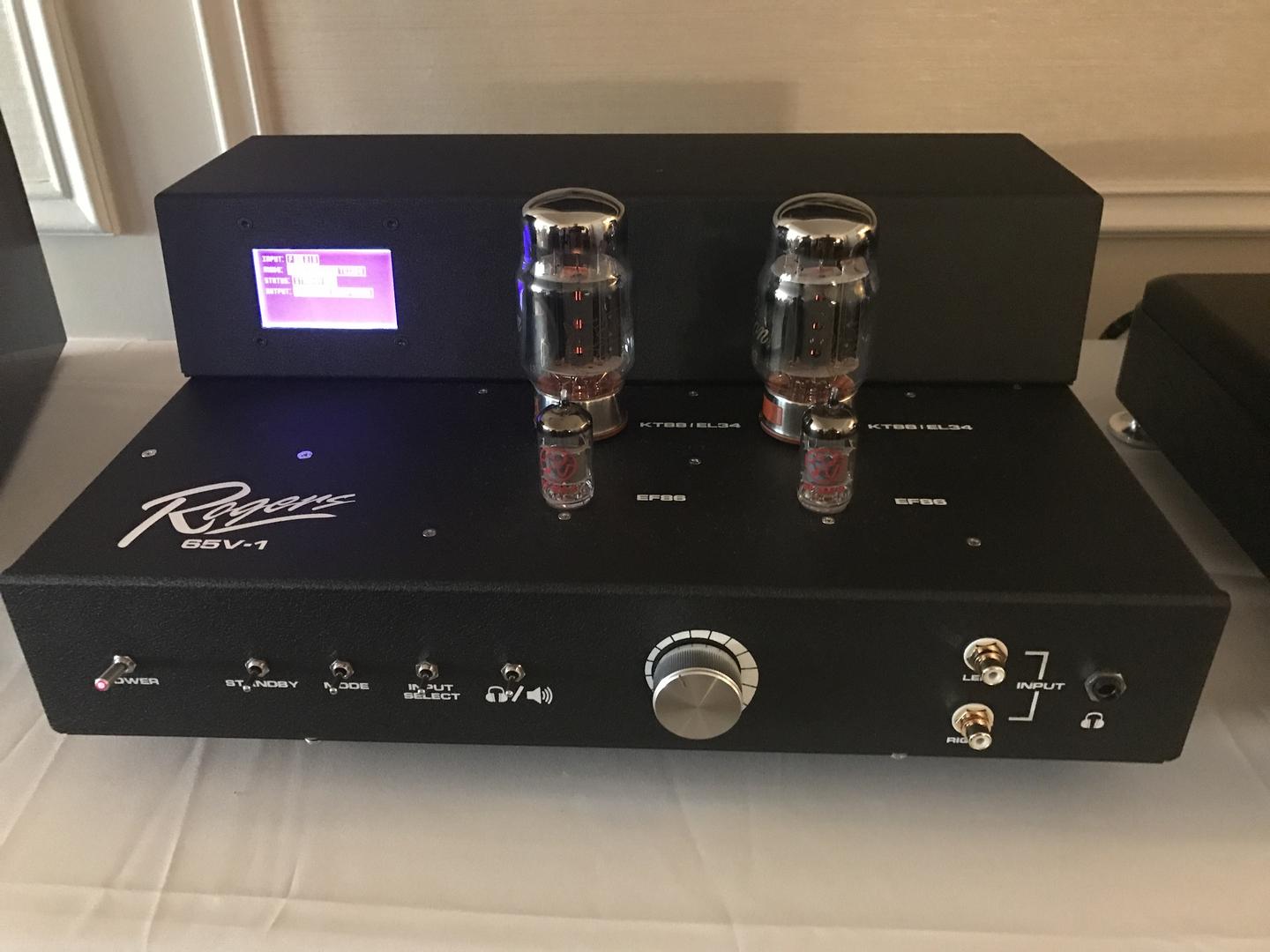 Rogers High Fidelity introduced a very sweet-looking and affordable all-tube integrated, the 65V-1. The $3995 65V-1 is built around a pair of KT88 output tubes (you can also run EL34s) for 25Wpc. A front-panel display shows the operating mode (ultralinear or triode) and other functions. The amplifier can be operated by front-panel controls or by Rogers’ iOS app from your iPhone. 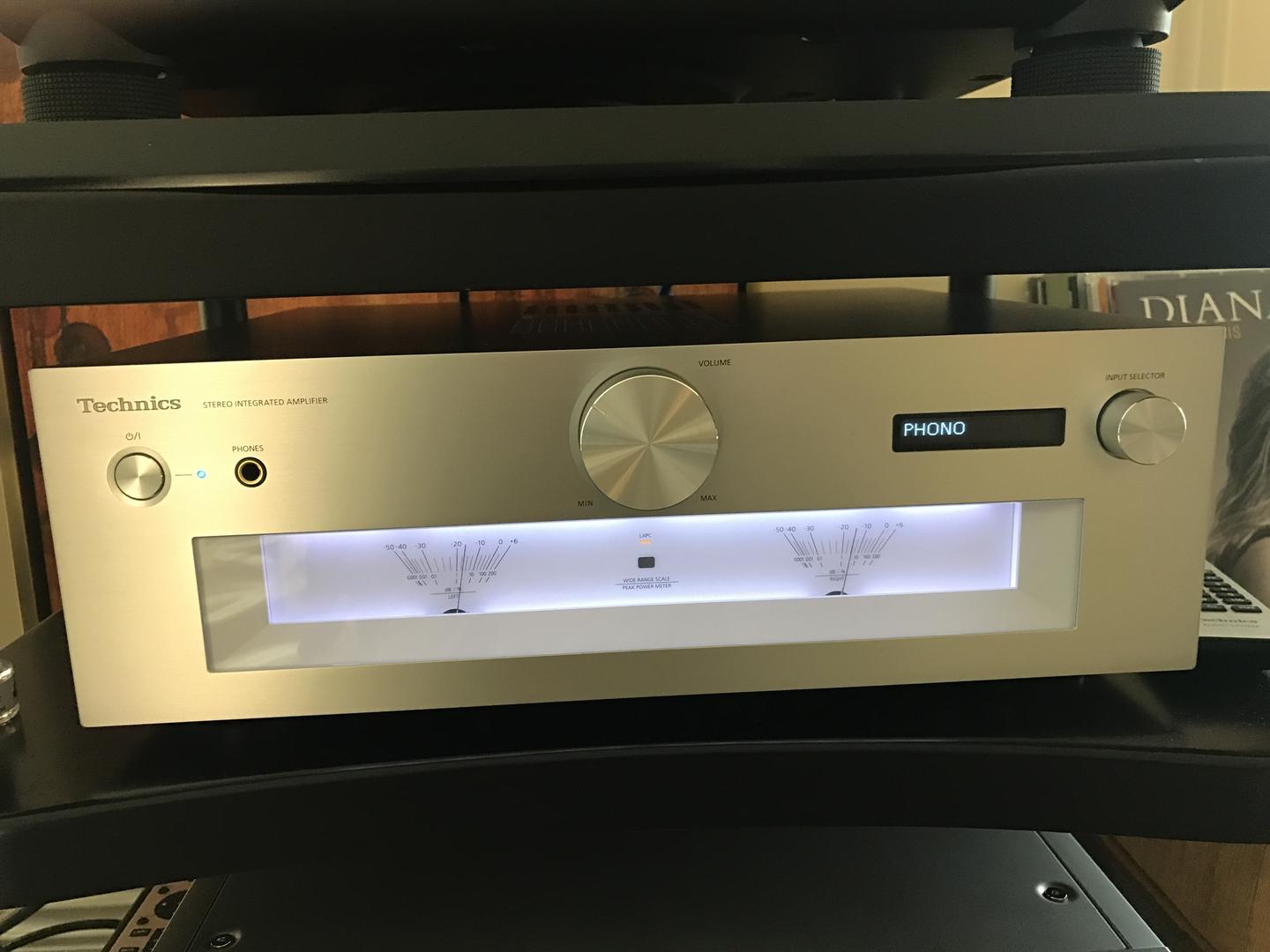 Technics showed an entire system positioned one step below the outstanding R1 Reference that Alan Taffel reviewed in Issue 265. It includes a new turntable, integrated amplifier, network player, and speakers. The system is still under development so details were sketchy, but the integrated amp will sell for about $2500 when the system launches later this year. 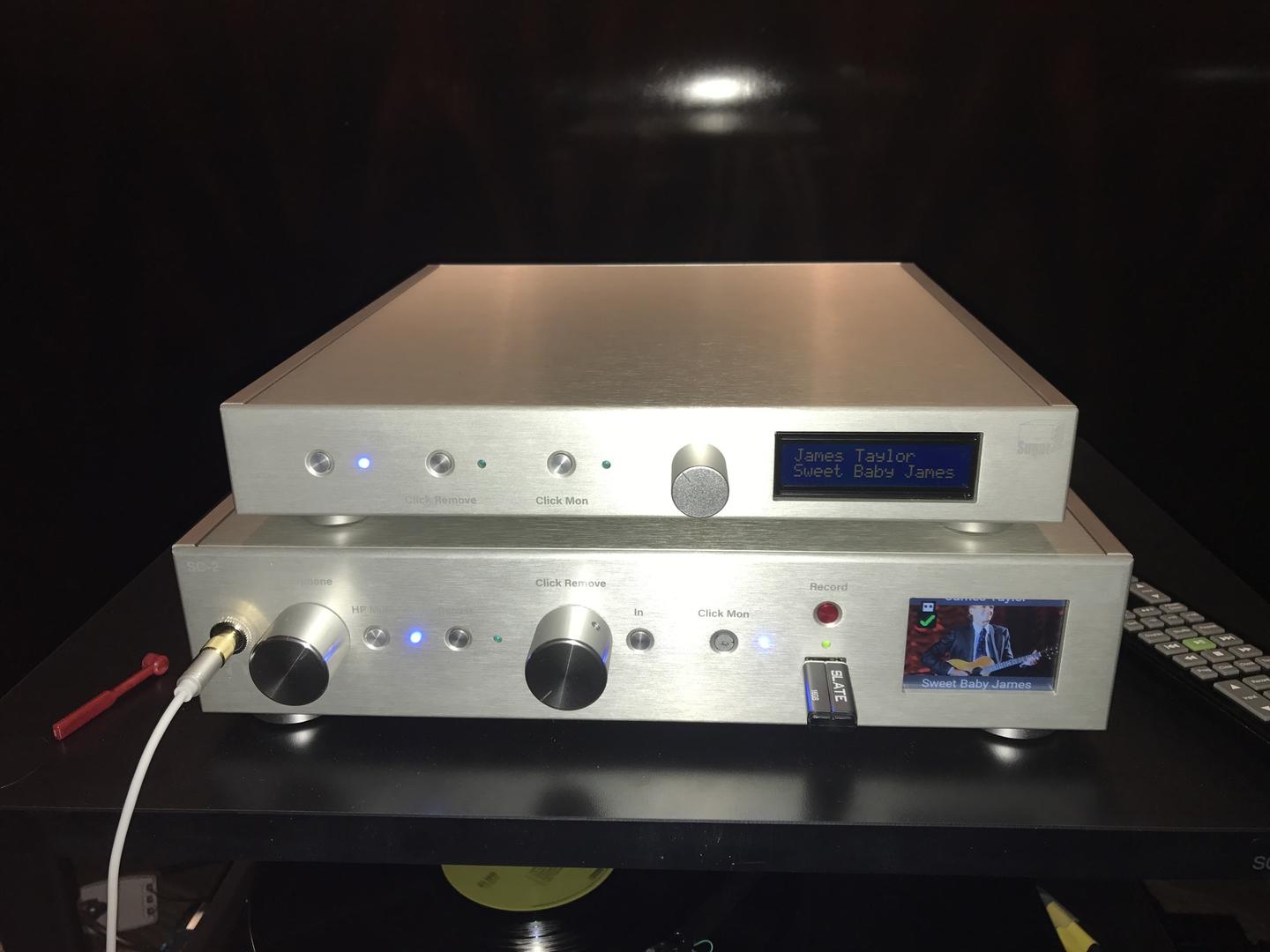 I’ve been tracking a company called Sweet Vinyl and its SugarCube LP tick-and-pop remover since it showed an early prototype at last year’s CES. The product has advanced considerably over that time, and the company plans to begin shipping the $1500 SC-1 in February and the $2500 SC-2 in April. The SC-1 is only a tick-and-pop remover; the SC-2 offers LP-ripping functions including automatic metadata retrieval. Every demo I’ve heard has been impressive; there’s a lot of technology—as much computing power as in a laptop—behind the scenes removing the pops. 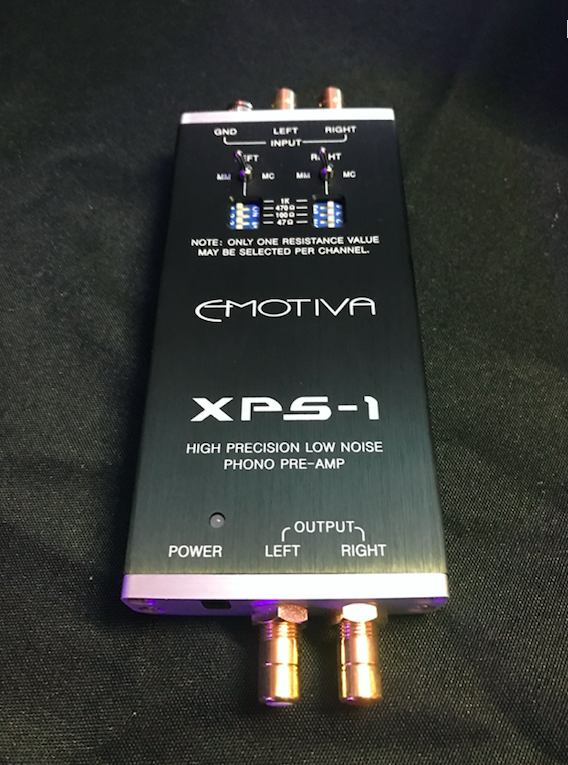 Emotiva launched no fewer than 16 new products, many of them lifestyle and home-theater oriented. A few, however, showcase the company’s high-end two-channel roots. The new Emersa line includes the EPA-1 preamp and DAC ($599), EPI-1 integrated amplifier that offers digital expansion options ($799), and the EDA-2, a 300Wpc power amplifier ($599). The company also showed a $179 phonostage with variable cartridge loading, all built into an extruded aluminum case. How do they do it for that price? The phonostage chassis is actually the extrusion for one of the company’s remote controls.

In cable news, Nordost demonstrated the effects of USB cables on an audio system by making comparisons between a generic USB cable and various models in its extensive line. Just going from a generic cable to Nordost’s entry-level USB was a massive step up. The improvements continued every step up the line, culminating in the new-at-the-show Valhalla USB. Although pricy at $3500, it sounded significantly better than any other cable.

Most Significant Introduction
The Elac Concentro is a major new statement in reference-level loudspeakers.

Most Important Trend
With Tidal’s launch of MQA and statements by other streaming services, MQA appears poised to realize mainstream adoption.

Most Coveted Product
AudioQuest DragonFly Red with MQA decoding—$199 and a Tidal subscription makes fabulous sound quality easily accessible to just about anyone.