Although it turns out I wasn’t on “official” assigment this year for RMAF, I’d made some plans to be in the Denver area to see family, friends, and yes, a concert at the same time as the show. Other TAS staffers who live closer by were assigned to cover the show this year—no problem. But since I was going to be in town anyway I didn’t want to miss the chance to check out RMAF and its swanky, palatial new venue, the Gaylord Rockies Resort and Convention Center not far from the Denver International Airport. Perhaps the show’s cost increases this year were worth the extra dough—it was quite a good-sounding show overall—and by all accounts attendance was strong. Maybe the improved sound quality had something to do with the newer, heavier-duty, and more upscale construction of the rooms.

Although traversing the distances between the larger Convention Center rooms and those in the hotel’s towers involved a pretty good hike, I didn’t mind the exercise. And since I wasn’t on “official” show coverage duty this time around, I didn’t attend the whole show or get to see all of the exhibits, so apologies to those I missed (there were many). (Accordingly I’m not including a Best of Show section this time.) What follows are some highlights and photos.

Italian maker Sonus faber introduced its brand-new Olympica Nova line of speakers, an overhaul of its best-selling mid-tier Olympica range first launched in 2013. In Italian the “Nova” in the name means both “new” and “star” (think supernova). Some updates include new internal bracing configurations, Sf’s proprietary Paracross Topology and upgraded capacitors in the crossover networks. The loudspeaker lineup consists of seven models, from the Nova 1 stand-mount to the Nova 5 flagship, alongside a couple of center-channel options (in pre-production but coming soon). As befits an Italian brand with a history of handcrafting, the speaker cabinets sport eight layers of wood and seven layers of lacquer with natural wood front baffles and hand-applied leather on top. 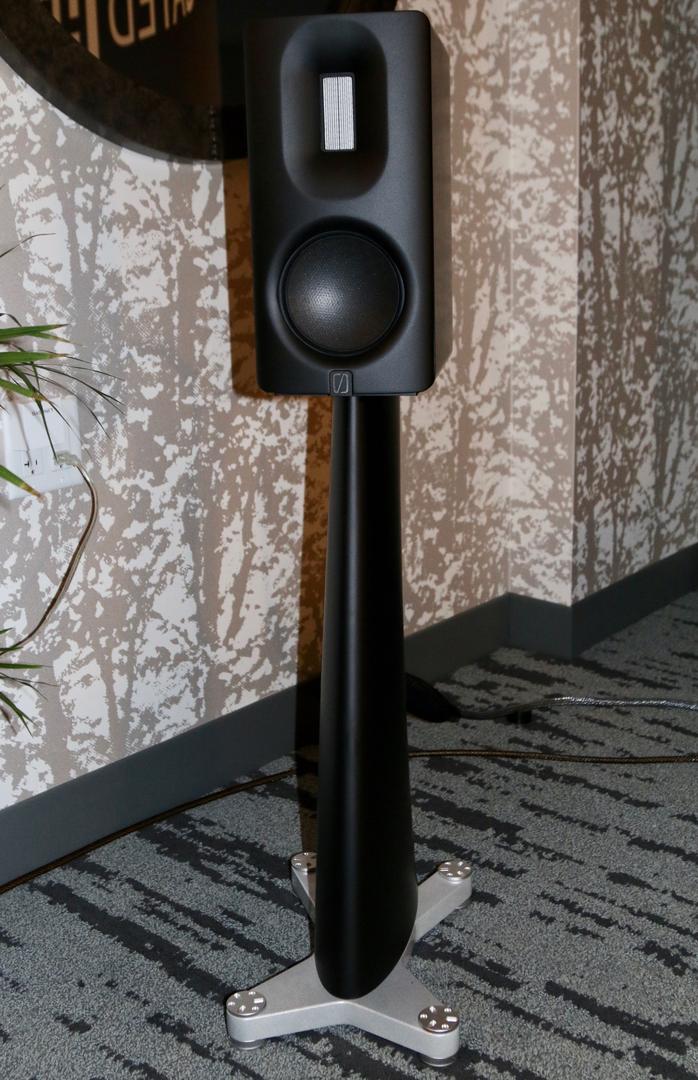 An unexpected introduction was a prototype for yet another new Børresen speaker: the Z01 (pictured above), a lower-priced stand-mount with the same ribbon tweeter as his other models plus a brand-new motor system and vented rear port, paired with a Naim streamer (using Ansuz Acoustics’ new Ethernet power switches) feeding into an Aavik Acoustics integrated’s DAC. 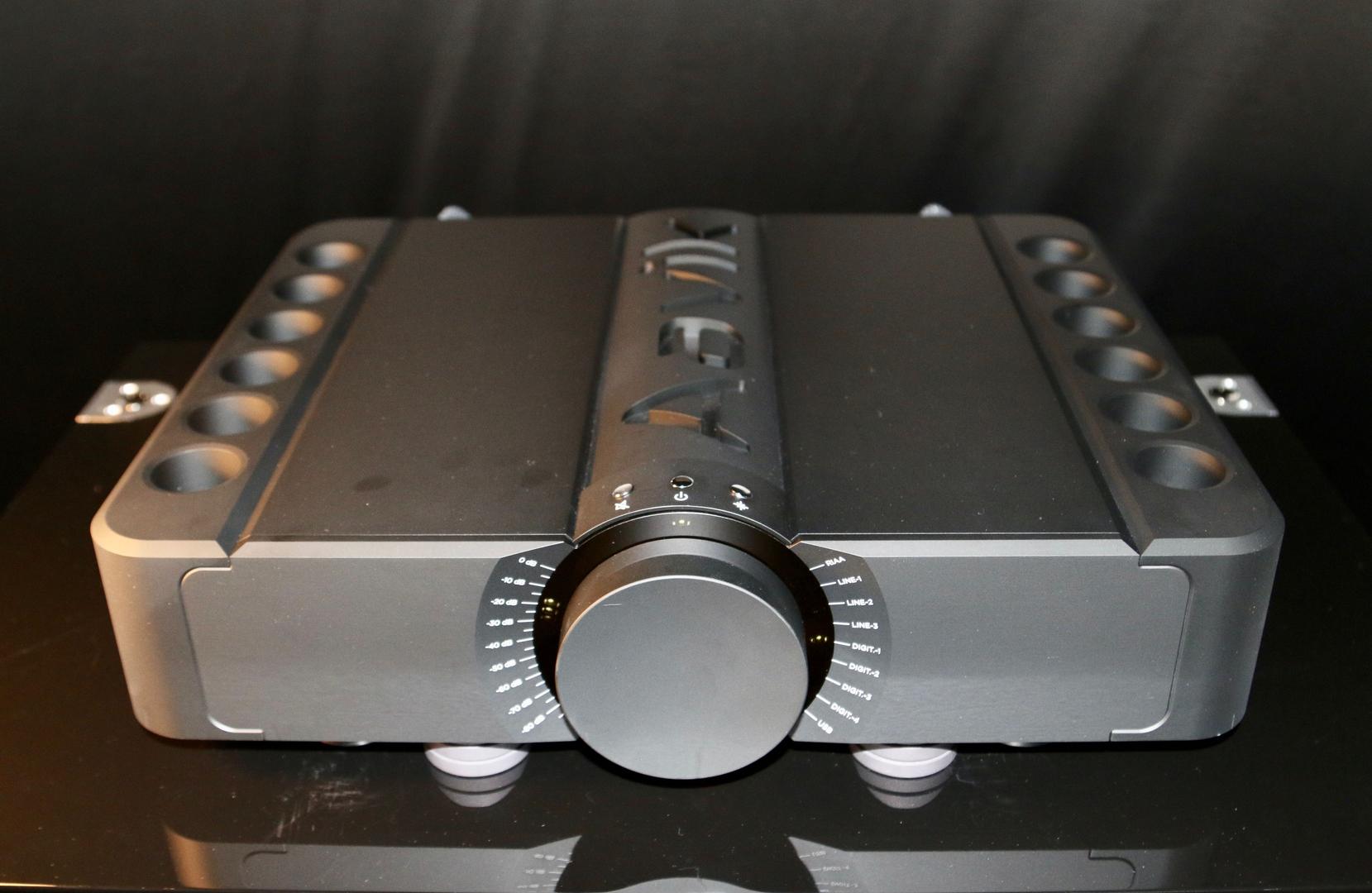 Next Level Hi-Fi of Chicago presented a trio of exhibits that included a couple of debuts: an Aavik Acoustics U-380 integrated amplifier that comes with your choice of three modules—you can choose dual DACs, one PCM and one DSD, and/or a phonostage or two. The unit also features a pre-amp out and a home-theater bypass for greater flexibility. It’s intended to be like a “Swiss Army knife” of an audio component. 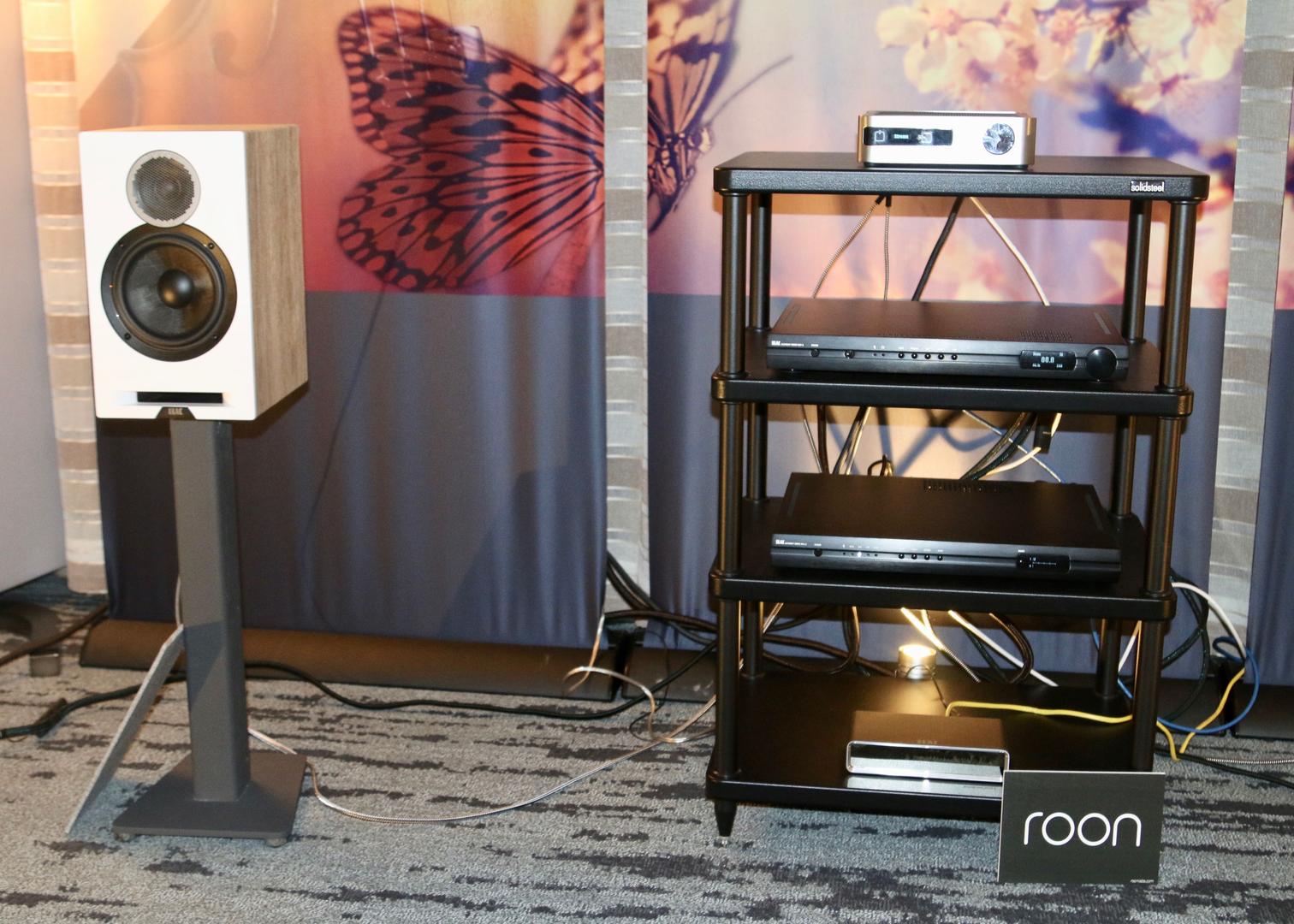 As usual Elac designers Andrew Jones and Peter Madnick presented super-sounding, affordably-priced systems, two this time. But they really outdid themselves with yet another brand-new Elac system that offers even more unbeatable bang for the buck: the Elac Discovery DS-A101 WiFi streaming integrated amplifier ($750) ahead of Elac Debut Reference DBR862 bookshelf speakers ($500/pr.). Quick math means that’s just $1250 for the basic system—a shoe-in for the best-sounding affordable system at the show. The Big Phat Band sounded, well, big and phat through these small speakers, and piano was quite well reproduced with remarkably natural timbre. 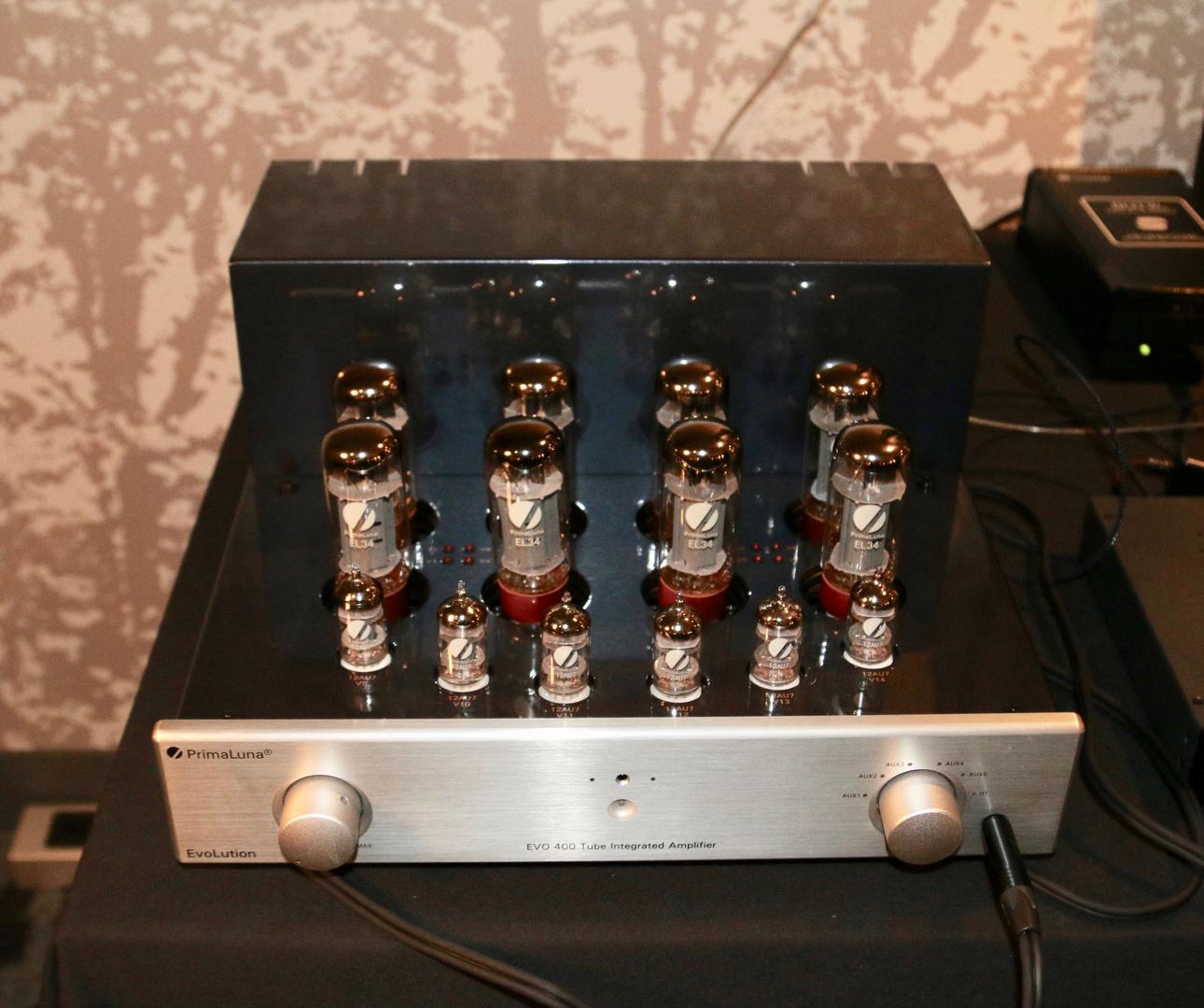 PrimaLuna introduced a baker’s dozen of new electronics at the show: four new preamps, four new power amps, four new integrated amps, and one new tube-rectified DAC.All feature adaptive auto-bias, PrimaLuna’s own tech development that is intended to make enjoying tube amplification easier/more enjoyable and more dependable than solid-state says Kevin Deal. Basically the tubes run at minimum voltage without going into crossover distortion to minimize wear and tear and help extend tube life. If a tube fails it gets noted and it goes into protection mode via a relay to prevent amp damage. 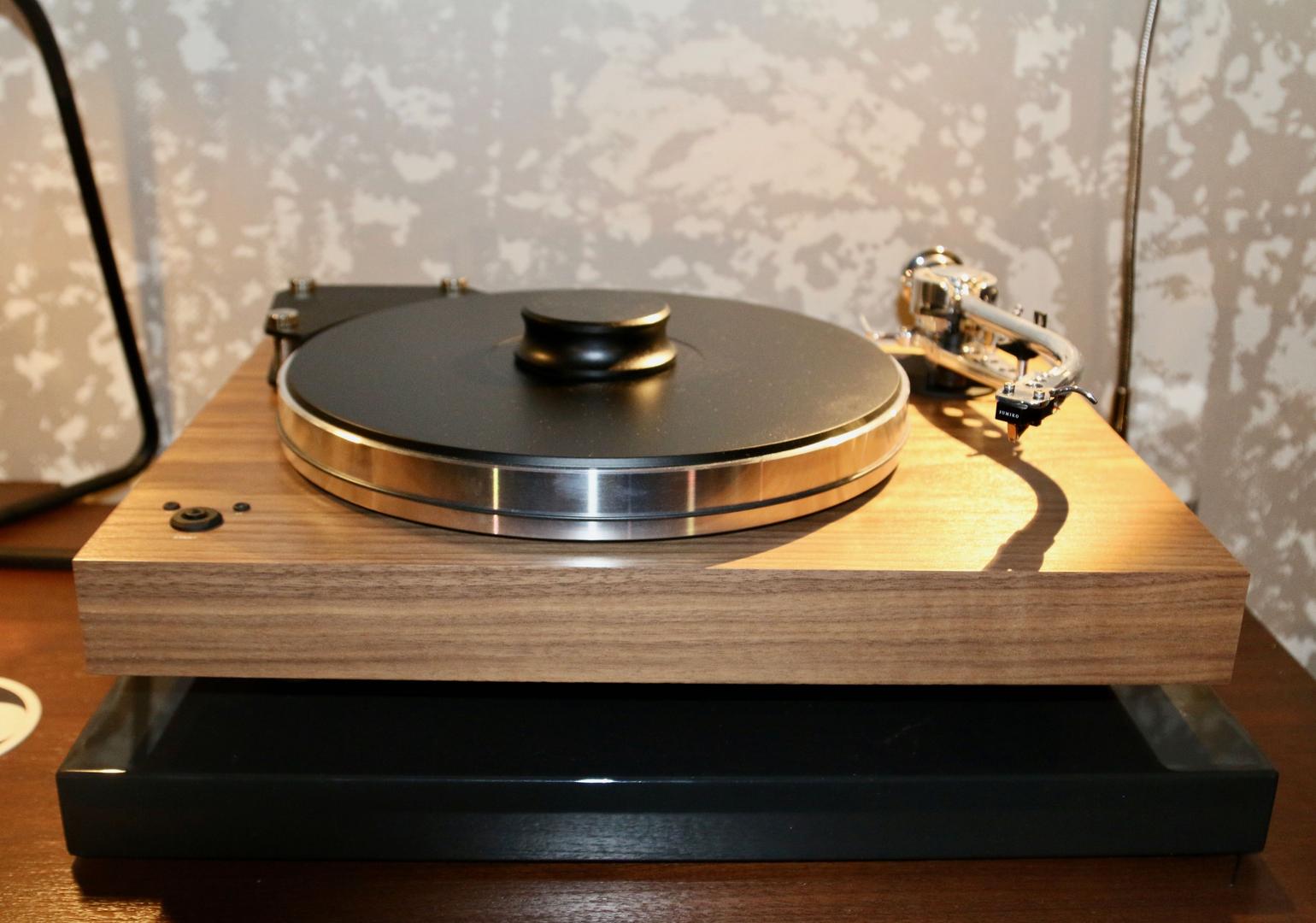 Pro-Ject introduced a trio of new ones: the more entry-level X1 ($899), the X2 ($1299) with an aluminum/carbon-fiber tonearm, and Classic Evo ($1700) with thermoplastic orbs embedded in the platter for better damping. The active system featured an RPM10 Carbon with Sumiko Blackbird cartridge ($3999 for the package with cart). 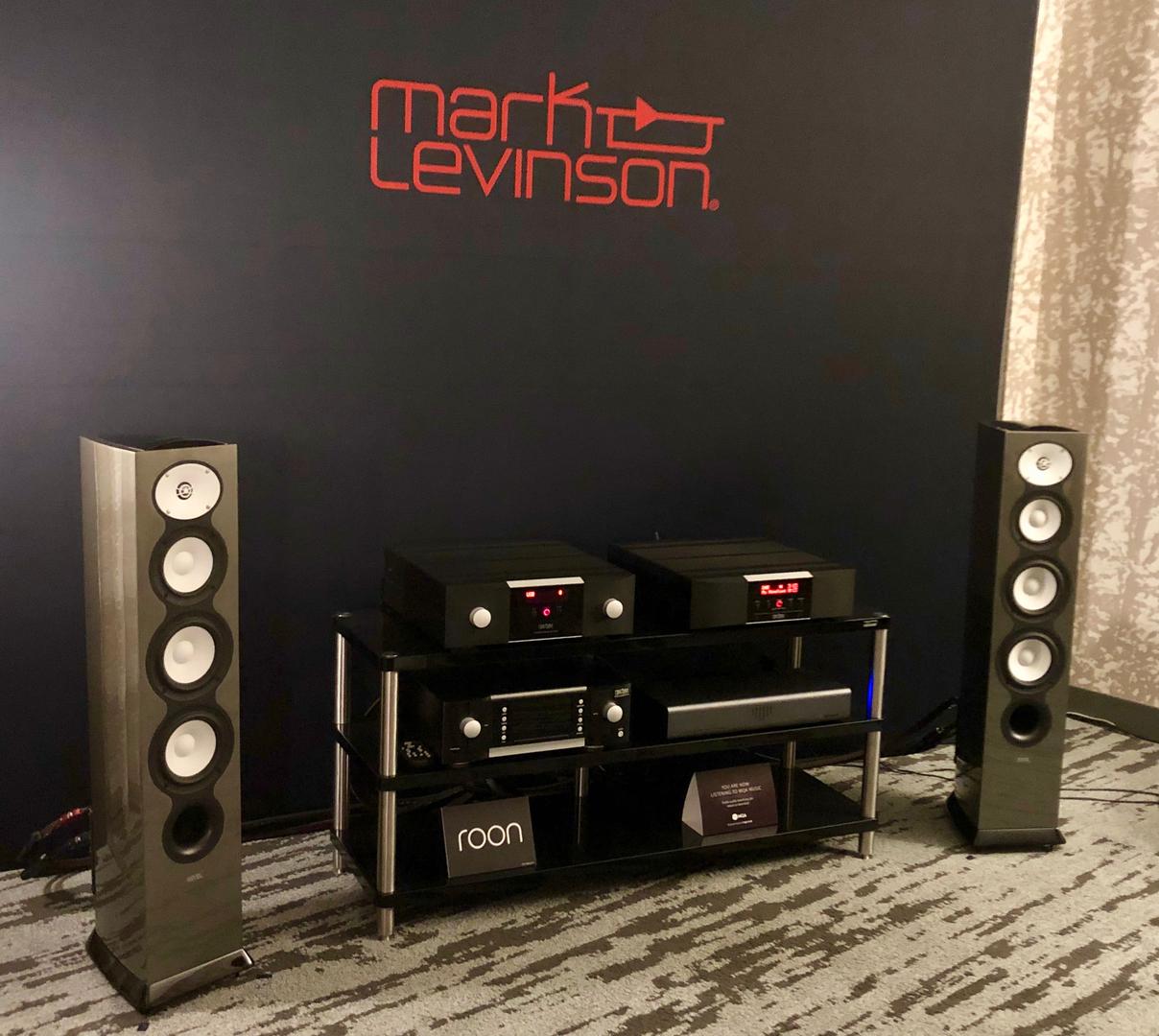 Revel introduced its new Performa Be F226 loudspeaker ($7k)—a three-way with beryllium tweeter, special waveguide, and front ports—at the show in a system with the latest Mark Levinson No. 5805 integrated amp and No. 5108 CD/SACD player that both debuted in Munich. 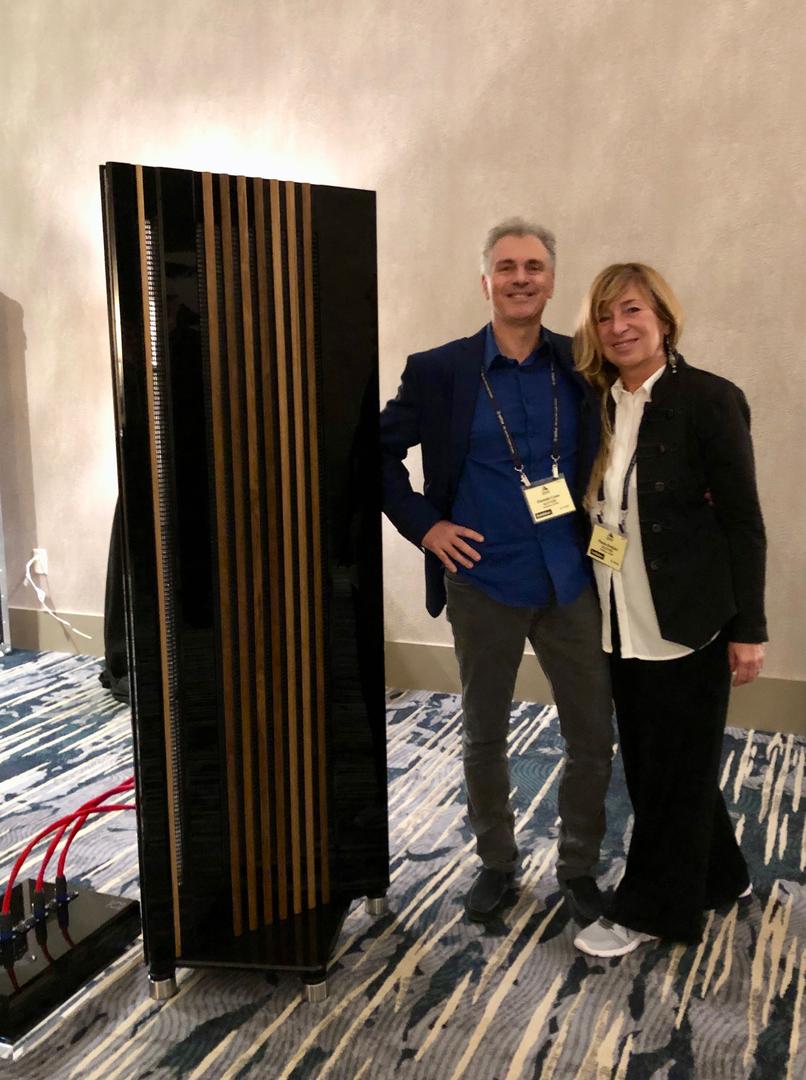 AlsyVox of Spain showed its strikingly elegant Botticelli planar-magnetic speakers ($89k/pr.) with true ribbon drivers and newly introduced external crossover units, pictured below (one per channel). Powered by a stack of Italian Omega DNA series electronics: a pair of monoblocks each containing an integrated preamp inside and an outboard power supply per channel ($20k/pr. in four chassis), DAC, ($9k) and CD transport ($12k), the three-way speakers astonished in their hard-hitting rapid-fire transient attacks and gorgeousness on Renaud Garcia-Fons’ “Palermo Notturno” and vocals from Jacintha and Holly Cole on CD. The makers of Alysvox speakers are Italian by origin: Daniela Coen and his wife Paola, an interior designer who helped guide the aesthetics of their speakers. 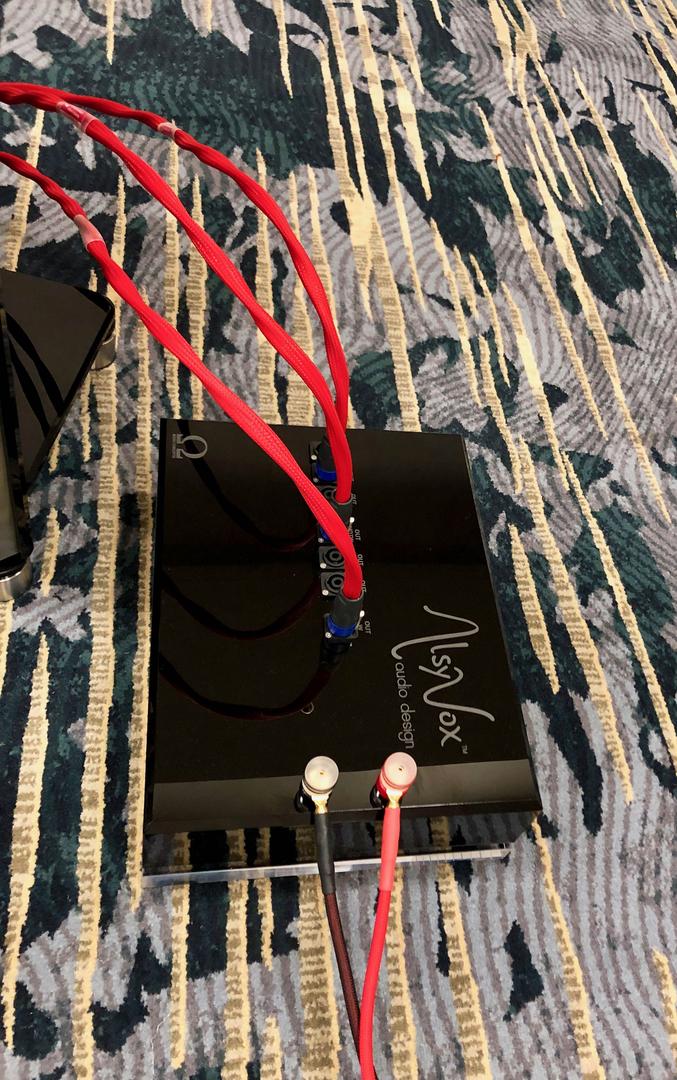 In the High End by Oz room, visitors were treated to the musical ministrations of the Vitus Audio Signature Series SIA-030 integrated amplifier ahead of Audio Solutions Virtuoso M 012 speakers. Founder Hans-Ole Vitus explained that his first challenge was how to make the new version of the integrated amp sound and perform significantly better than what they already had; a couple of reasons for creating the new 030 were manyrequests to fit a DAC or streamer into the 025, but also to make it a smaller footprint—though weighing 63 kg (almost 139 pounds) it isn’t necessarily lighter. He added regulated power supplies for input and output stages, which he says was tricky in terms of preserving dynamics for output. The SIA-030 delivers 30W of consistent Class A power (into 8 ohms RMS) and 200W Class AB switchable; heavy-duty 2.2kW transformers provide power to spare. A silver model was in the system and the cool Titanium Orange model seen and heard in Munich was on display. A United Home Audio UHA Ultima series tape deck served as a powerhouse analog source. 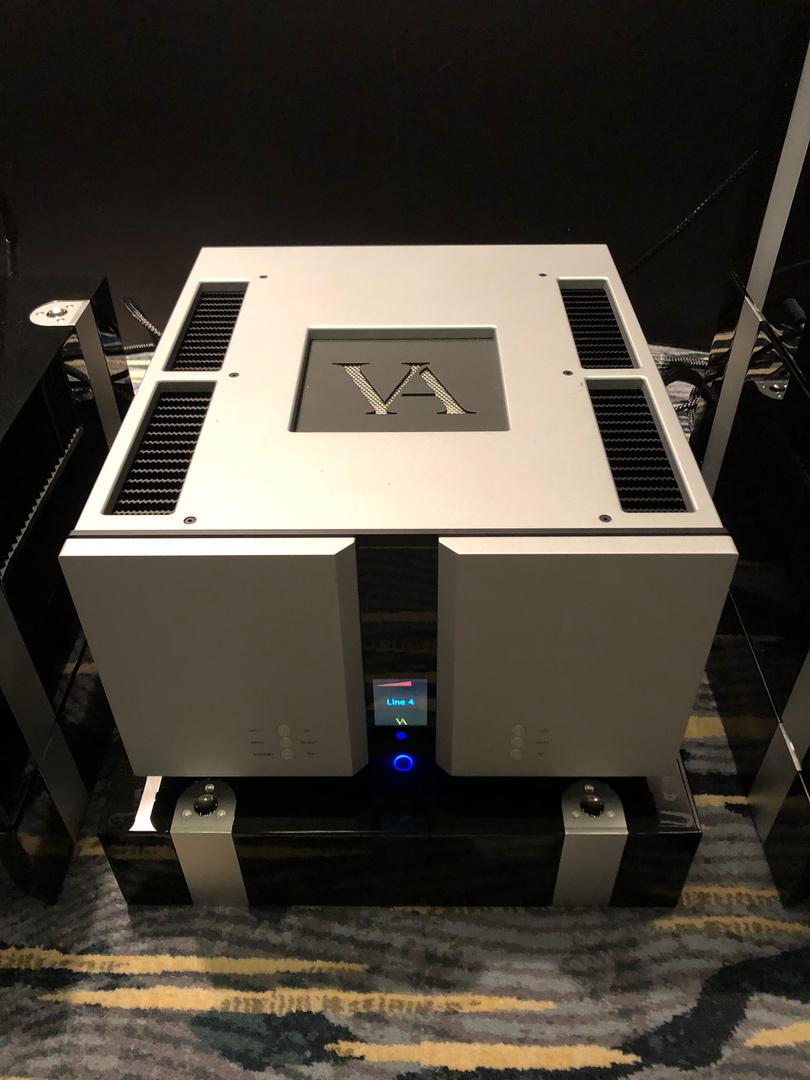 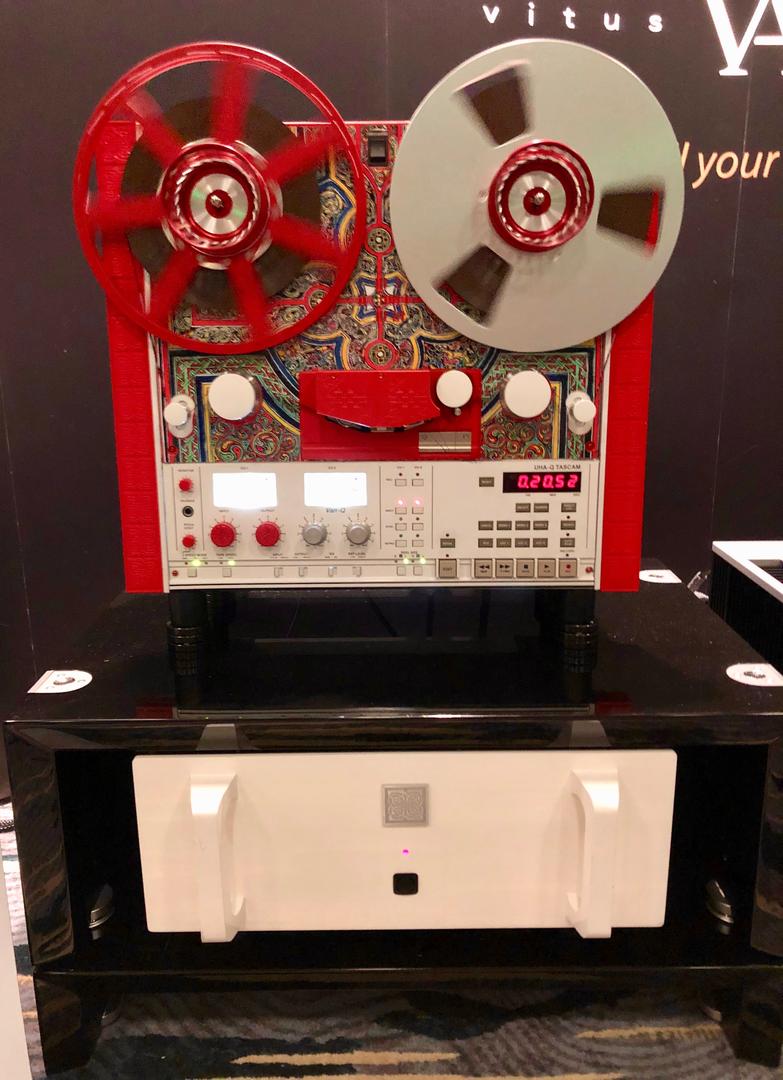 Technics showed the AL-G700 CD/SACD network player ($2999) with the latest-version AKM processor and options for getting your digital music fix almost any way you please: digital or balanced outputs, front and rear USB inputs, plus MQA, Spotify, Deezer, YouTube, internet radio, Bluetooth, etc. Of course all can be controlled by the Technics Audiocenter app (Chromecast operating system) for iOS or Android. Watch for an upcoming review from Andrew Quint. On the analog side I checked out the (not new but worthy) SL-1500C turntable, a coreless direct-drive model that contains a built-in phono preamp (with separate power supply) and line or regular phono outputs, and optically controlled auto-lift that’s defeatable. The cordless direct drive design removes vibration by having the platter mounted directly to the motor. And the tonearm tracked exceedingly well, even an extremely warped LP didn’t faze it; it just palyed back smoothly as you please. The SL-1500C is priced at $1199, complete with an Ortofon 2M Red cartridge (factory-installed and aligned).

Another cool turntable I was pleased to see again was Frank Schröder’s TG (pictured below), or Tiny Giant, demo’d in a system with Troy Audio Hellena Mk II speakers, first driven by Thrax electronics then later by a glorious stack of VAC tube amplification. 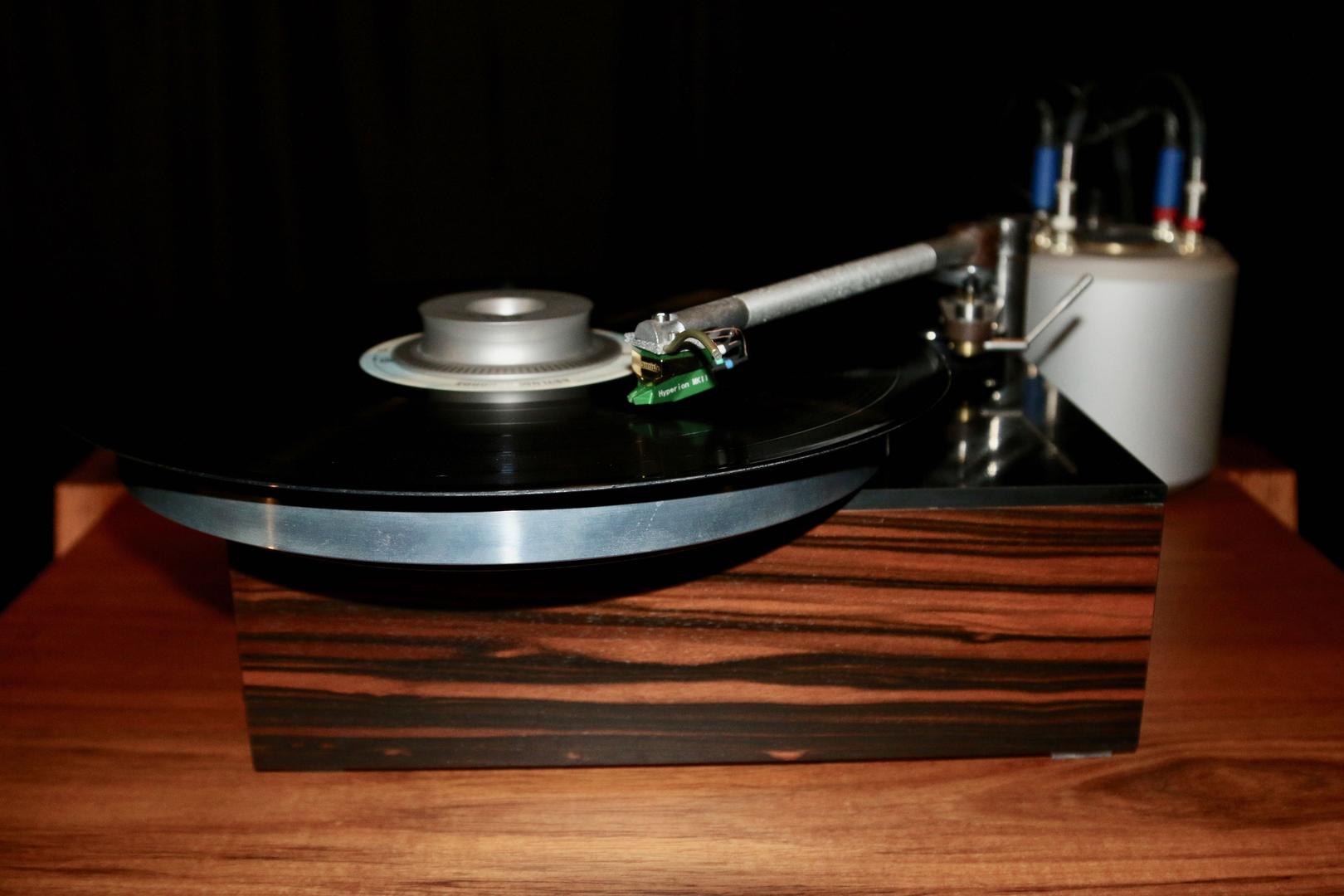 RMAF marked the U.S. debut of the Hegel H390 integrated amplifier ($3999) that was introduced in Munich and recently won an EISA Award. The full-featured amp powered Sonus faber Electa Amator III bass-reflexstand-mounts ($8500, $1500 for marble stands) in a setup that sounded remarkably big, full, and detailed—and bass extension exceeded expectations on the DubXanne version of “Spirits of the Material World.”

I happened upon an AudioQuest Folk Heroes cables, including Robin Hood and William Tell (their U.S. premiere after debuting in Munich) and ground-noise-dissipation demo in a great-sounding and less-than-astronomical system with Focal 40thAnniversary speakers alternating with Bowers & Wilkins 804 speakers with a Classé Sigma 2200i integrated amplifier, Moon LP 610 phonostage, and VPI turntable. Noticeable differences in openness, spaciousness, and far quieter backgrounds became apparent listening to a familiar cut off my Andrew Bird LP. 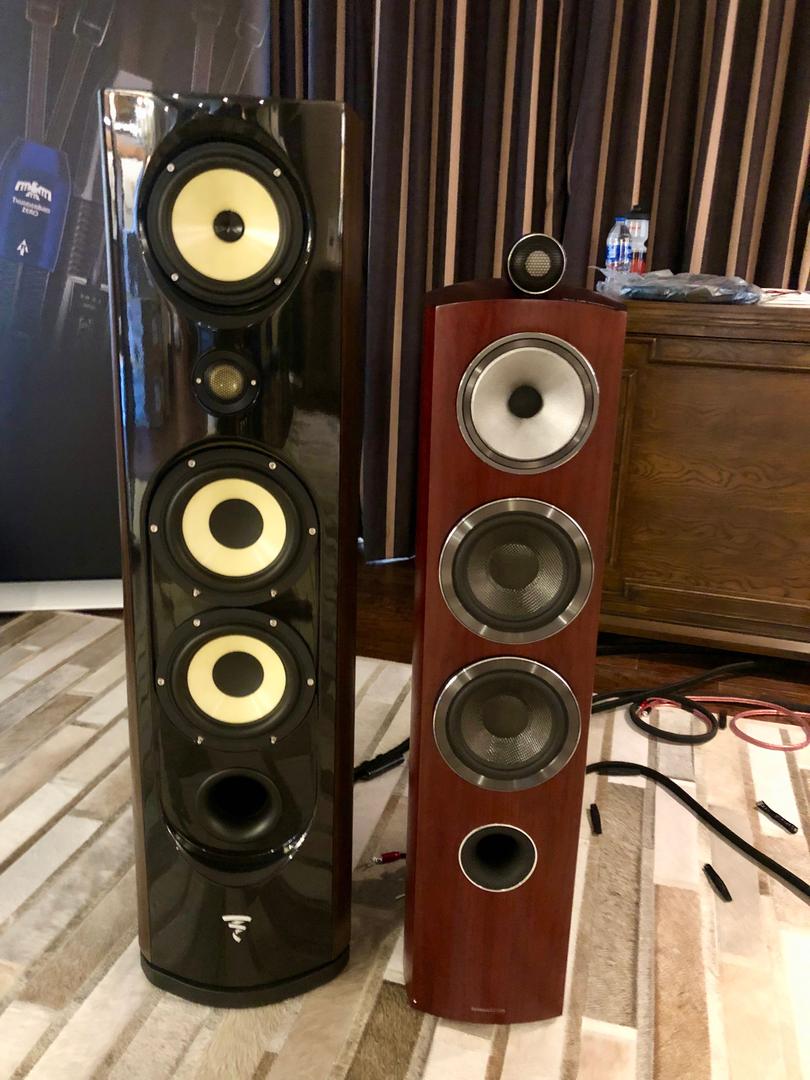 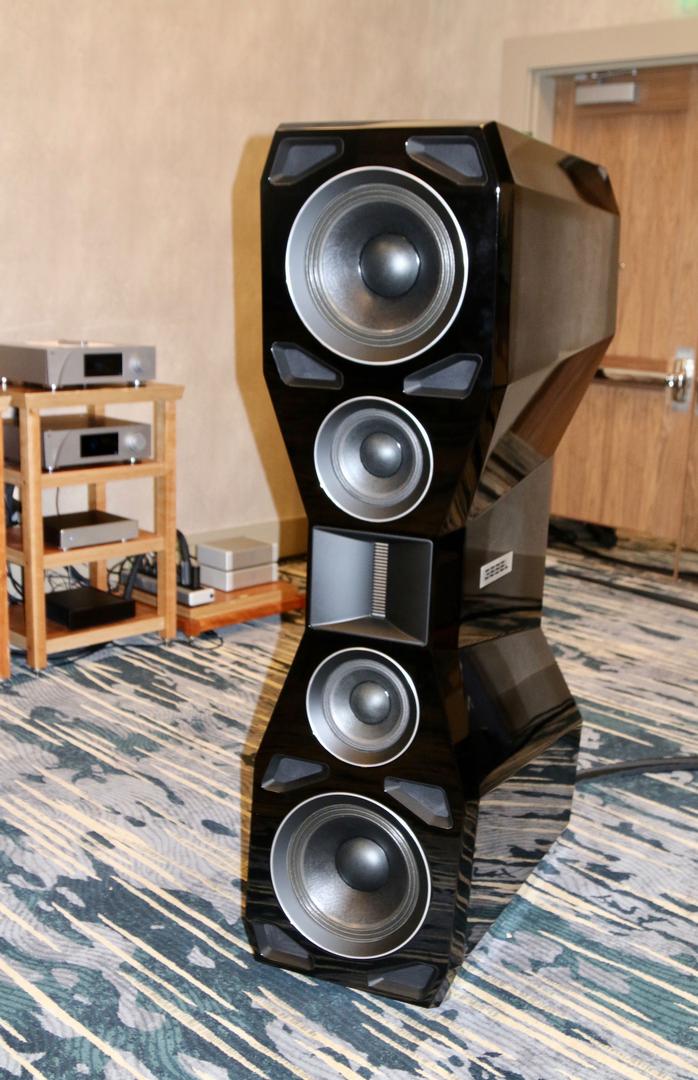 Although I didn’t get to visit nearly every exhibit room, among the best-sounding systems I heard at the show was an exhibit (presented by Musical Surroundings of Oakland and Soundings of Denver) with the debut of the AMG Viella Forte 12 Turbo Engraved turntable with Clearaudio Jubliee MC cartridge, Boulder electronics (1110 preamplifier, 1160 stereo amplifier, 2108 phono preamp, and 2120 DAC) ahead of Vienna Acoustics Liszt loudspeakers in rosewood finish and a “six-pack” of REL subwoofers. Listening to my 12-inch single of Yes’ “Owner of a Lonely Heart” yielded big fun, a guilty pleasure. Sadly I didn’t make it back there in time to hear them blare some other non-audiophile source material. (Bonus: It also happened to be one of the coolest-looking rooms with nice table-top displays of CNC-machined turntable and amplifier parts—plus it had a great view.) 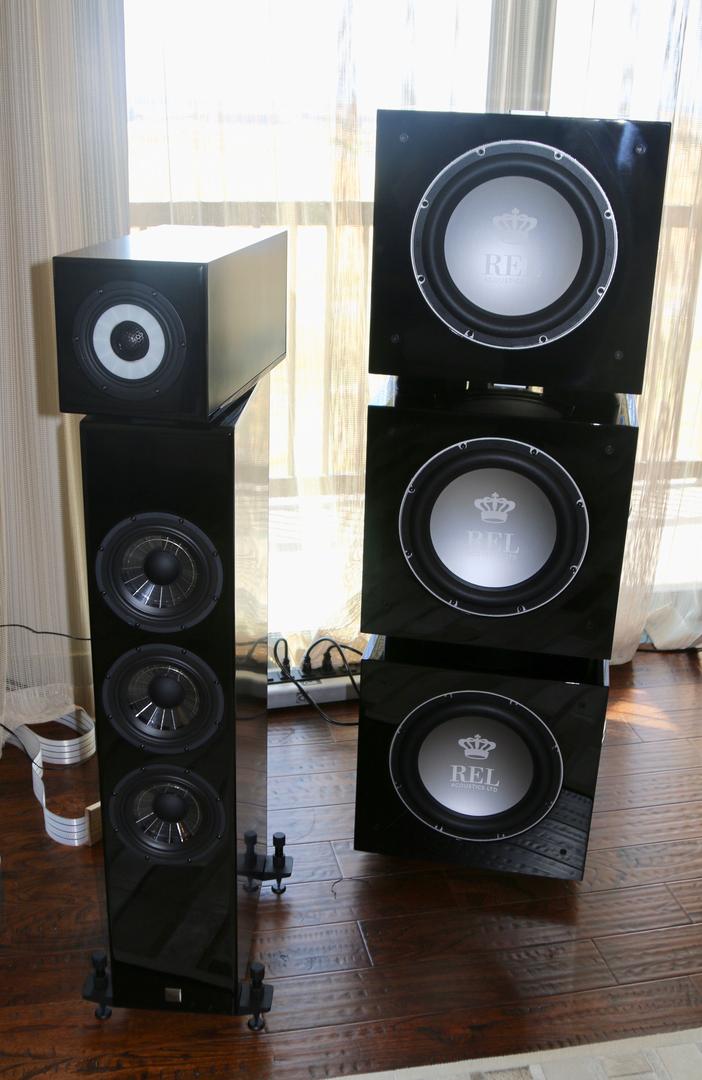 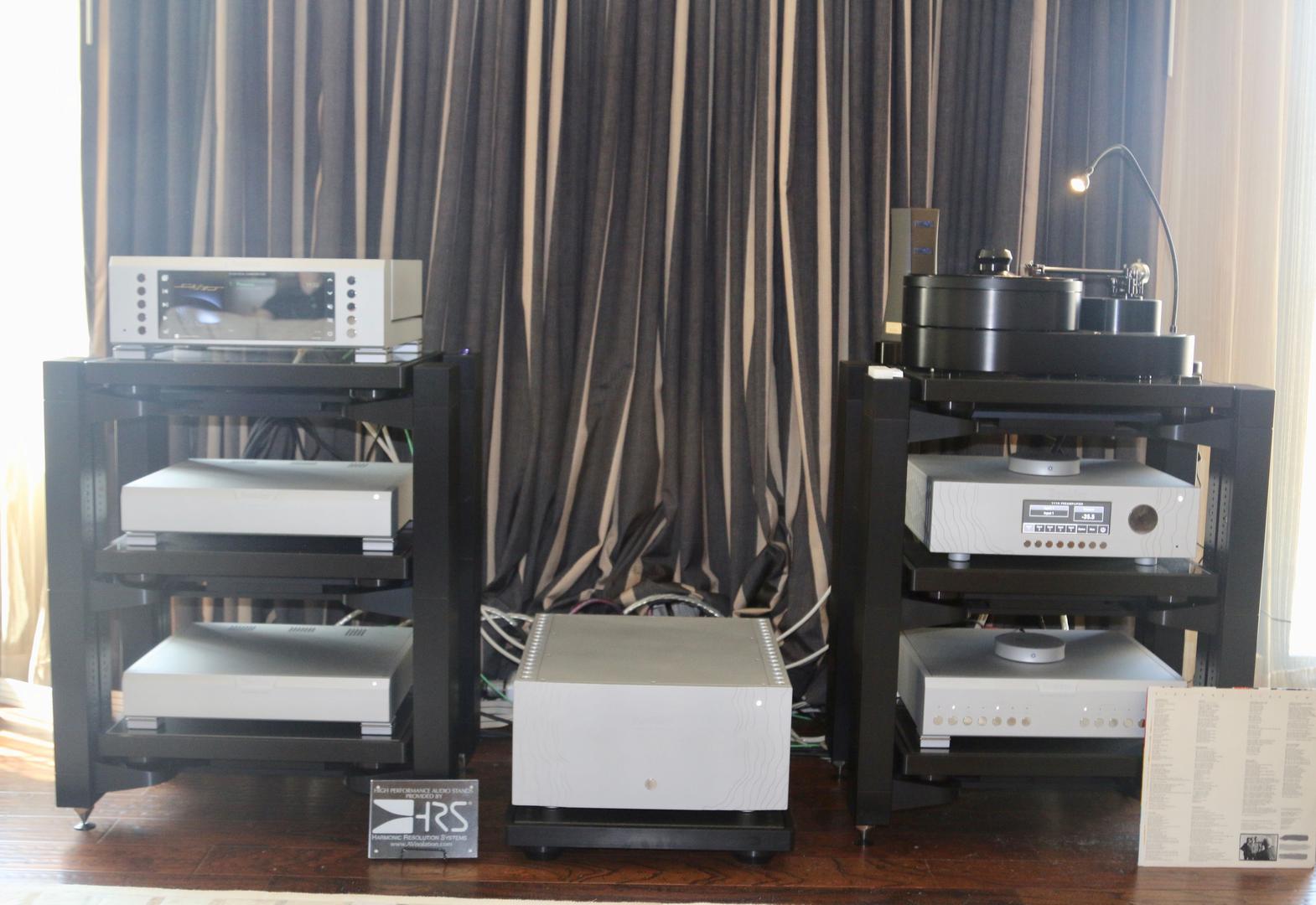 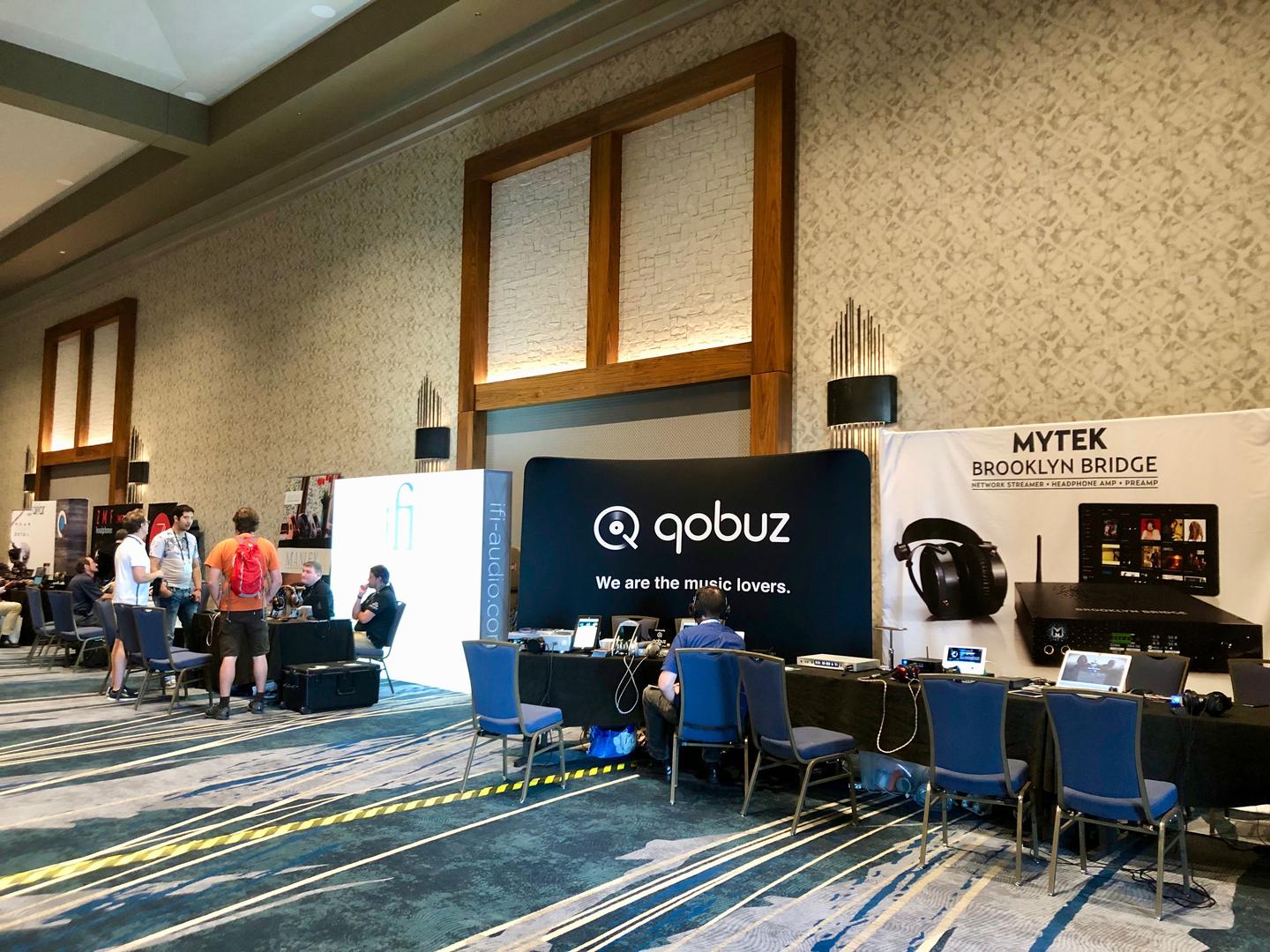