The analog renaissance appears to be stronger than ever with a number of new analog products making their worldwide or U.S. debuts at RMAF. While the sheer number of new offerings didn’t compare with the Munich Show (nothing does), there were still plenty of mouth-watering turntables, tonearms, cartridges, tape decks, and phonostages helping to produce some of the best sounds at the show. Better yet, several manufacturers and distributors were offering complete turntable packages with integrated tonearms and pre-fitted cartridges to help customers get going quickly, and these “ready-to-go” analog front ends were not limited to entry-level offerings. In addition, several new analog components appeared to be great values at relatively affordable prices.

With so much new gear debuting at RMAF, I may have missed a few items, but those I did uncover are sure to upgrade the performance of many fine audio systems.

Most Significant Analog Products at RMAF 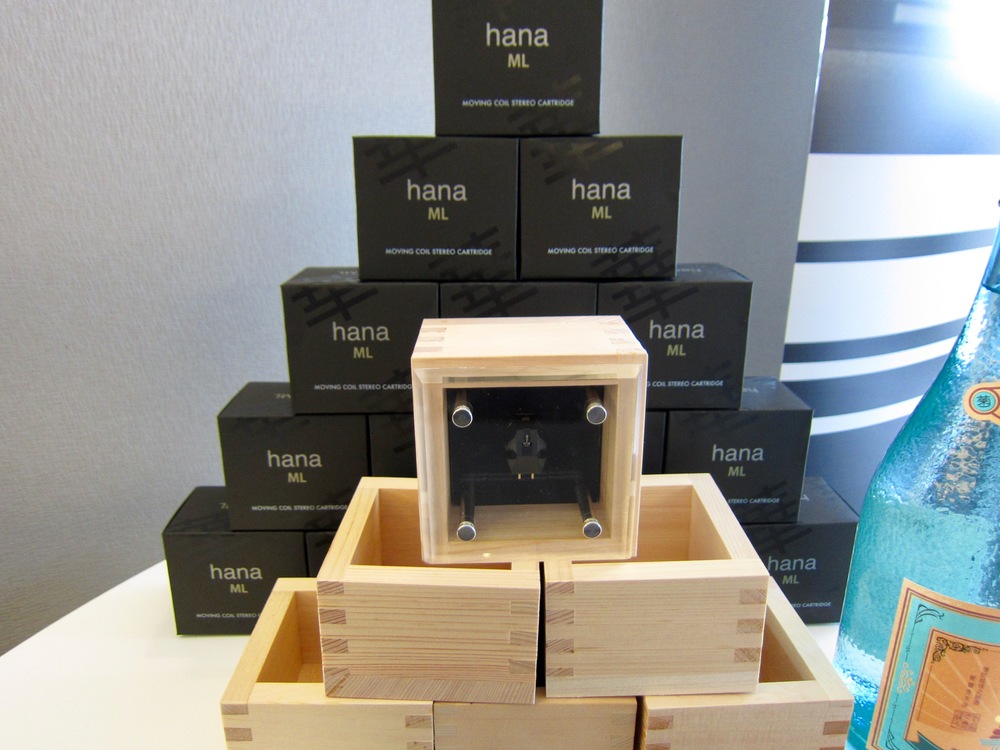 Hana ML moving-coil cartridge
As usual, Musical Surroundings debuted a number of enticing high-performance analog components at RMAF. Of particular note were its Hana “M-series” moving-coil cartridges, which feature Delrin cartridge bodies to dampen resonances and allow more low-level details to emerge, as well as nude microline styli, aluminum cantilevers, high-purity copper wire, and cryogenic processing of the front yoke and center and rear components. Hana’s M-series cartridges come in both high- and low-output versions. The low-output Hana ML ($1200) was not out of place in one of the best-sounding systems at RMAF, featuring the new AMG Viella V12 Doppio turntable, Audio Research electronics, and Sonus faber Aida 2 loudspeakers. The sound was big and bold on a Gershwin album and seductive on female vocals. I thought I was listening to a much more expensive cartridge, which makes the Hana ML a great value. 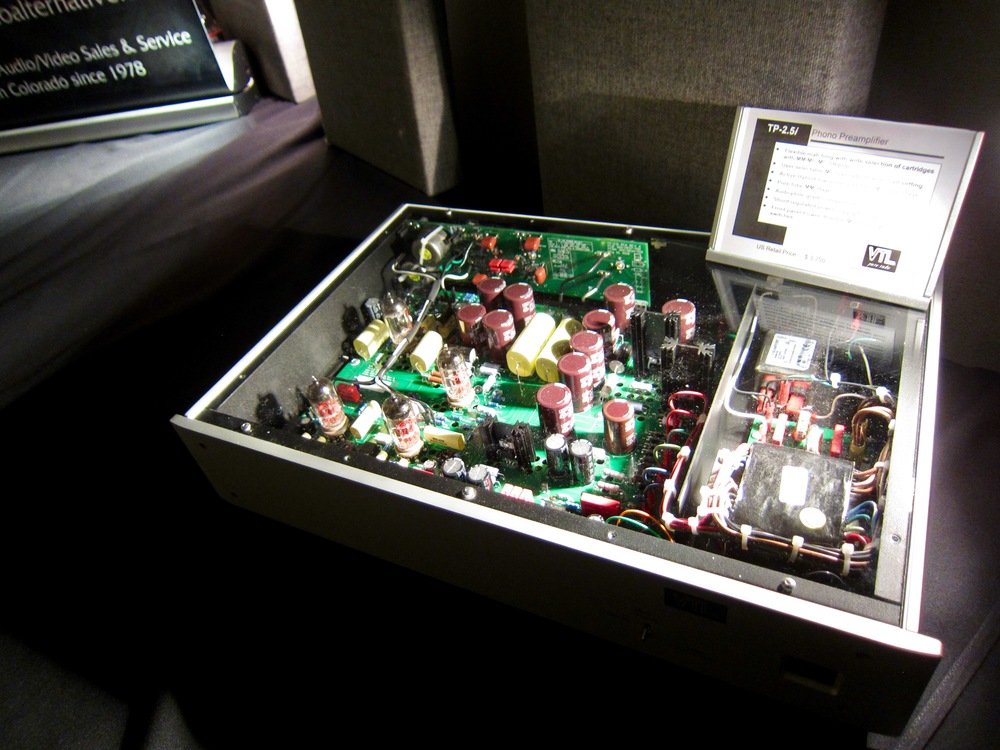 VTL TP-2.5i Performance Phono Preamp
VTL’s new TP-2.5i Performance Phono Preamp ($3750 including internal MC step-up transformers) is now in production. It offers a lot of the same outstanding sonic characteristics as VTL’s flagship phonostage, the TP6.5, and benefits from technology migrated from that reference unit. The “improved” version of the TP-2.5 offers user-adjustable impedance loading, two levels of gain, and inputs for both moving-coil and moving-magnet cartridges, plus a switchable rumble filter and a mono mode. In a system with an AMG Viella ’table with a 12JT Turbo arm and AudioQuest Lyra Atlas cartridge, VTL S-400 Series II amplifier, and Vandersteen Model Seven MkII loudspeakers and Sub Nine subs, the TP-2.5i helped produce very good deep bass extension and articulation, a rich sound with beautiful timbres, and appealing clarity without any edge or stridency. With either the VTL TP-2.5i or the VTL flagship TP-6.5, the system was among the best-sounding systems at the show. 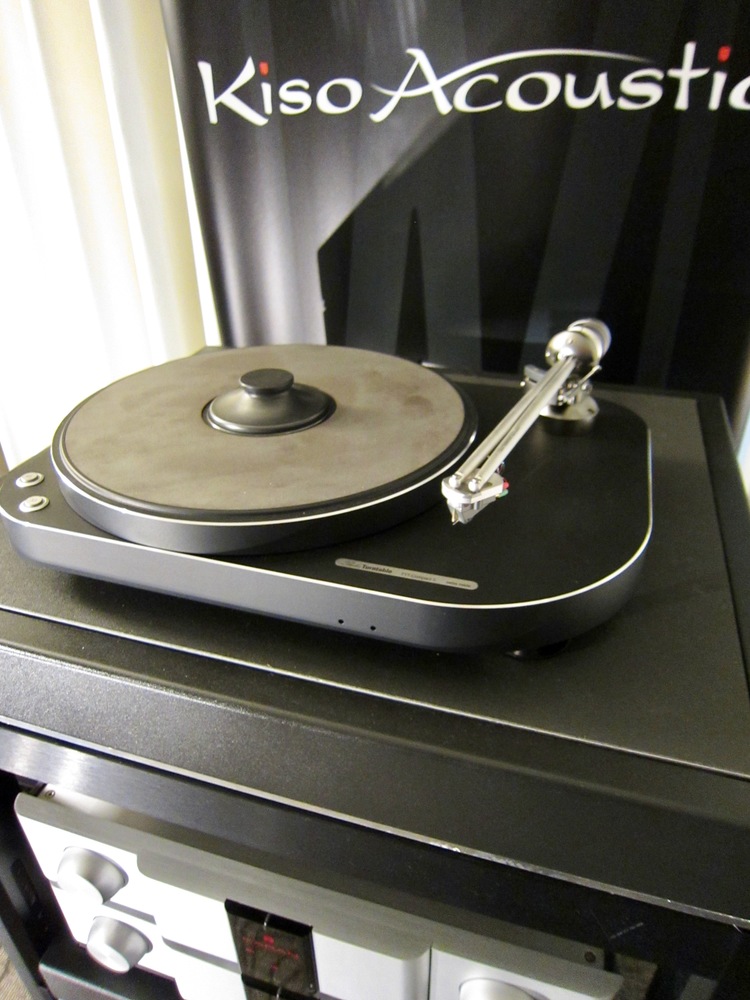 Thales Statement Tonearm
Built by former expert Swiss watchmakers, the Thales Statement tonearm ($21k) sounds phenomenal! Here’s a pivoted tonearm that has nearly zero tracking distortion—a maximum of 0.006 degrees. The sonic payoff is stunning clarity and openness. It’s like listening to a superb linear-tracking tonearm with rock-solid bass! The Statement offers easy cartridge swapping, as well as VTA and azimuth adjustment on the fly. The Statement uses “aged aluminum,” similar to some of the finest watches, which is reportedly stronger and acoustically superior. 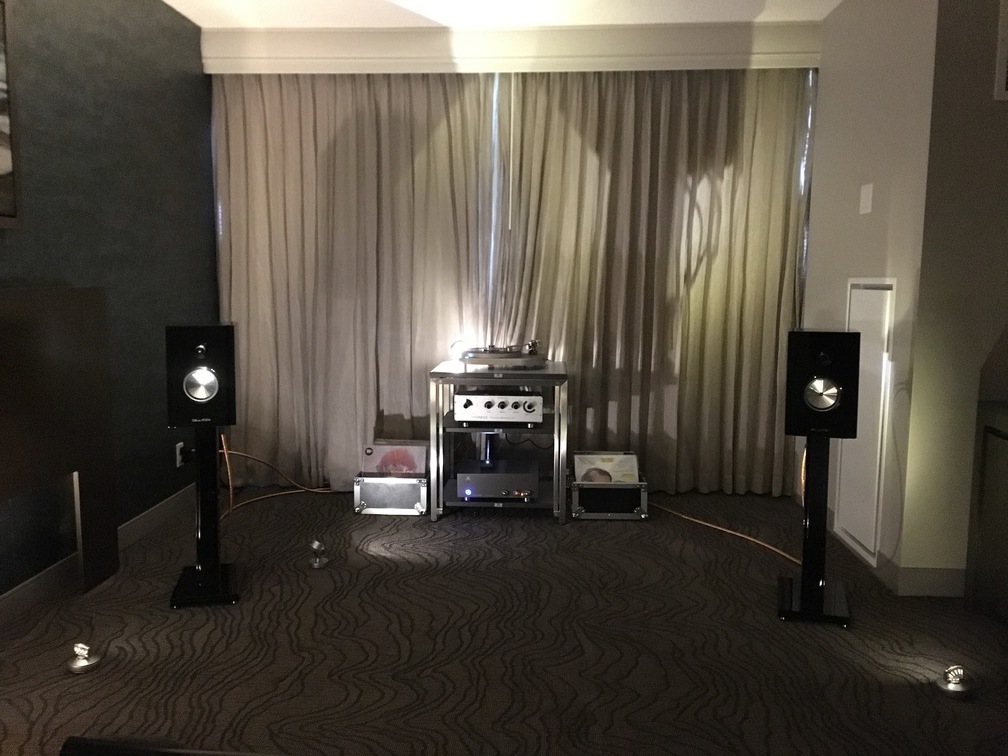 I heard the Thales Statement in two systems, both using a Thales TTT-Compact II turntable. The first was from Wynn Audio where I met Flaviano Carrapa, who showed me photos of the Statement in production. In a system with an EMT JSD-VM cartridge and Karan Acoustics electronics driving Kiso Acoustics HB-X1 speakers, I was amazed at the system’s clarity and fine detail retrieval. In the second system, the Thales combined with the amazing Zellaton Legacy loudspeakers, Ensemble Massimo Fuoco hybrid integrated amplifier, Fuuga-Miyabi MC cartridge, and a Thöress Phono Enhancer Mk2, Ensemble cables and rack, and a Schnerzinger Giga Protector to produce perhaps the best-sounding system at the show. Its stunning transparency, outstanding clarity, coherence, and openness captivated me, particularly on the last day of RMAF. 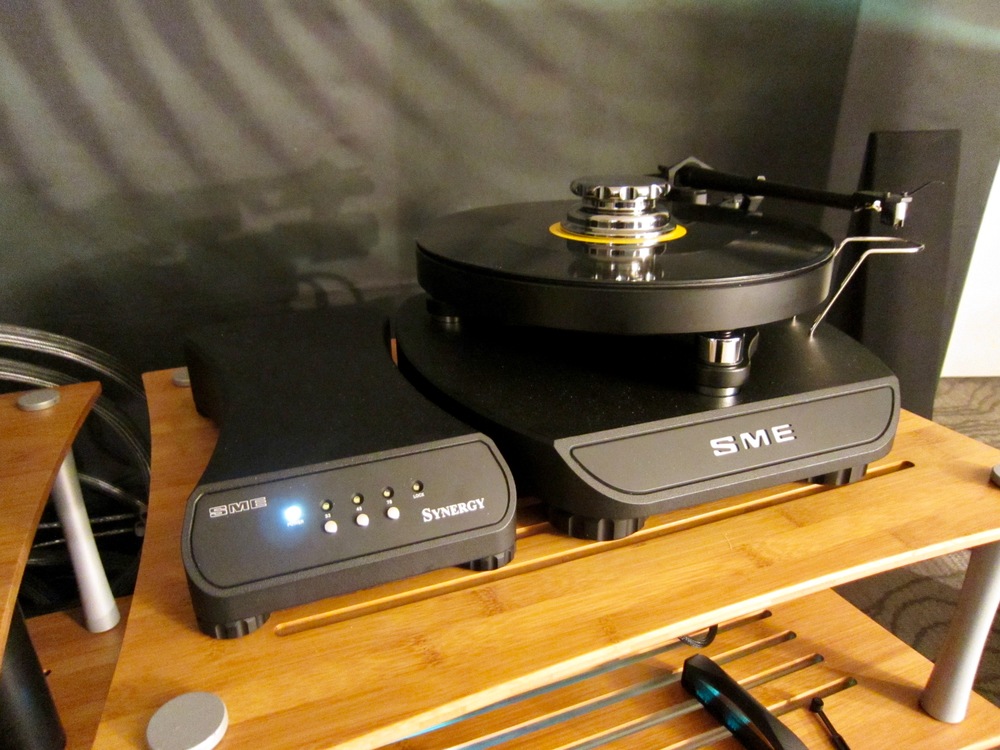 SME Synergy Turntable System
While shown in Munich, SME’s Synergy turntable system ($26,800) made its U.S. debut in Denver. It illustrates that preconfigured “ready-to-go” turntable systems are not just limited to entry-level products. The Synergy package includes a specially designed, built-in, battery-powered phonostage made by Nagra, and an Ortofon MC Windfeld Ti moving-coil cartridge. This new turntable design includes a main chassis precision-machined from a solid billet of aerospace aluminum, supported on four large polymer isolators inside adjustable feet, and a ten-pound platter machined from aluminum alloy. A tonearm based on the SME Series IV with Crystal Cable mono-crystal silver wire rounds out the package, along with an external electronic speed control. In a system with Chord electronics and Spendor D9 speakers, the sound was ultra-quiet and very smooth and detailed, with fast transients without smearing. The Staple Singers “I’ll Take You There” did just that! The SME Synergy is distributed in North America by Bluebird Music. 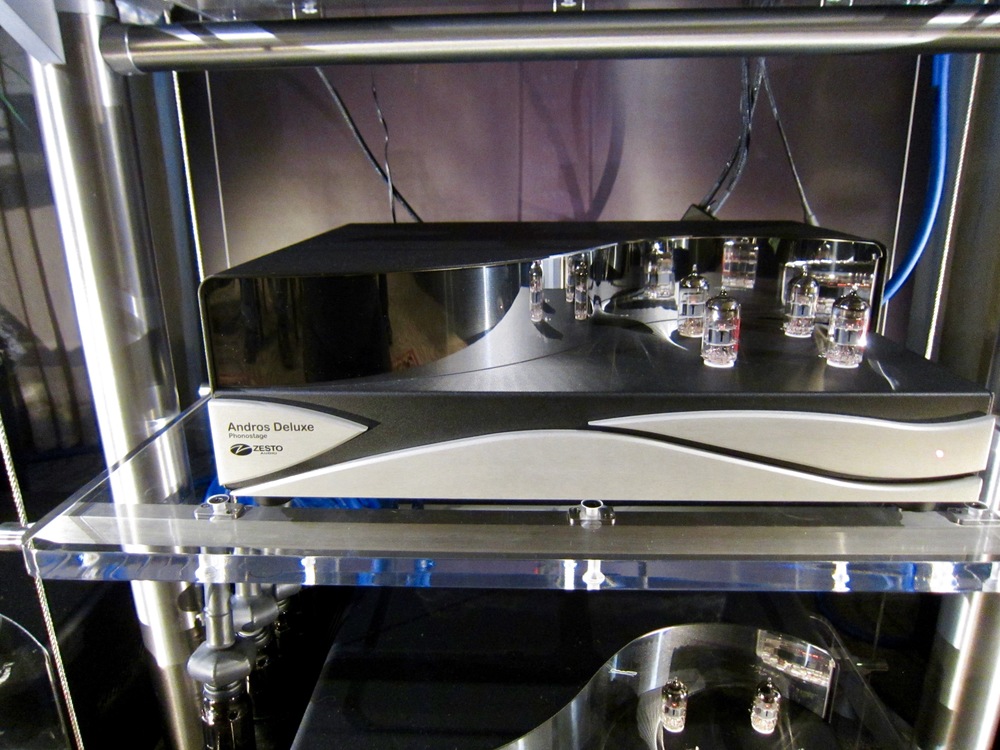 Zesto Audio Andros Deluxe Tube Phonostage
Zesto premiered its new Andros Deluxe Phonostage ($6900), which migrates technology from Zesto’s flagship Tessera Phonostage into a smaller package. It features a true floating-ground balanced output by using 12DW7 tubes, the same MC step-up transformers as the Tessera, and an entirely new output circuit. Like the Andros 1.2, it accommodates up to two tonearms and does not use any transistors in the signal path. Combined with the marvelous Merrill-Williams REAL 101.3 turntable, Tri-Planar U2 tonearm, Zesto electronics, and Marten Django L Black speakers ($10k), the Andros Deluxe helped produce another one of the best-sounding systems at the show, with lots of air, natural timbre, and fine details emerging from a jet-black background. 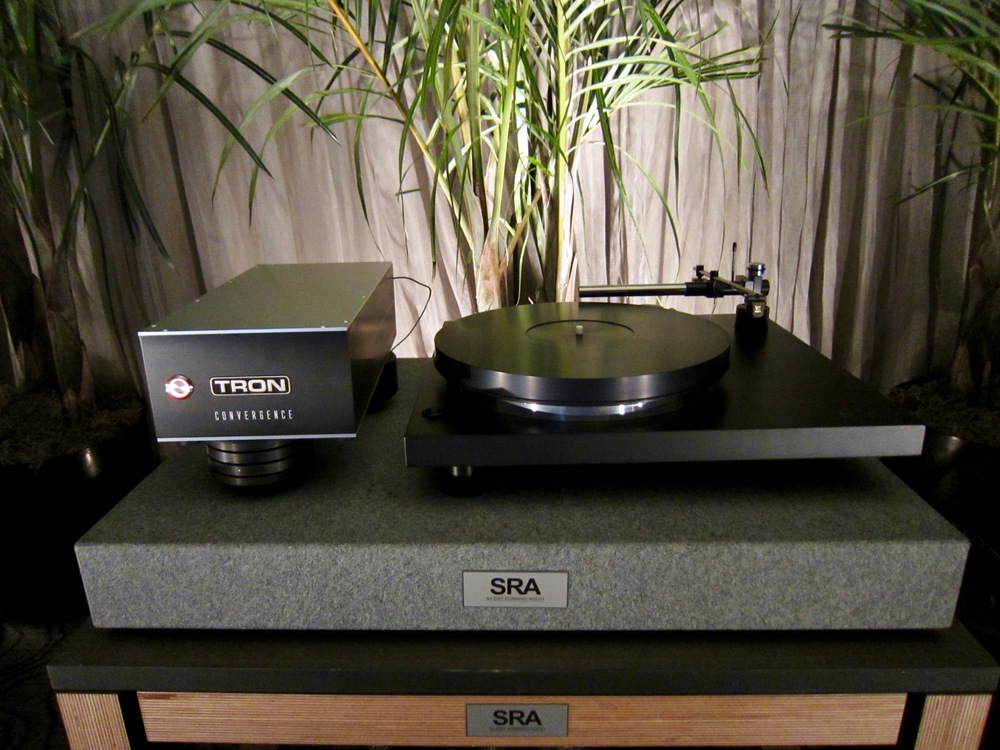 Holbo Air-Bearing Turntable System
While seen in Europe, High Water Sound introduced the Holbo air-bearing turntable system ($7500) to these shores. It includes an integral linear-tracking air-bearing tonearm and allows VTA adjustment while playing a record, as well as precise adjustments of tracking force, SRA, and azimuth. In a system with Cessaro Horn Acoustic Wagner speakers, Tron-Electric electronics, and a Miyajima Labs Saboten mc cartridge, the sound was very lively with great detail and beautiful timbres. Owing to the linear-tracking Holbo, soundstaging was holographic. This turntable system is a great value!

Boulder 508 Phono Preamp
Boulder’s massive two-chassis flapship phonostage, the 2108 ($52k), looked awe-inspiring, but it was on silent display, so it was the diminutive 508 phono preamp ($5k) that caught my attention in the Soundings room. The 508 reportedly is derived from Boulder’s 1008 phonostage and is meant to capture a lot of its larger sibling’s sonic performance. In a system with the TechDAS Air Force III turntable with a Graham Phantom Elite tonearm and Boulder 1110 preamp and 1160 amplifier driving the Rockport Atria, the diminutive Boulder 508 phonostage ($5000) held its own, with very good soundstaging, dynamics, and bass articulation. 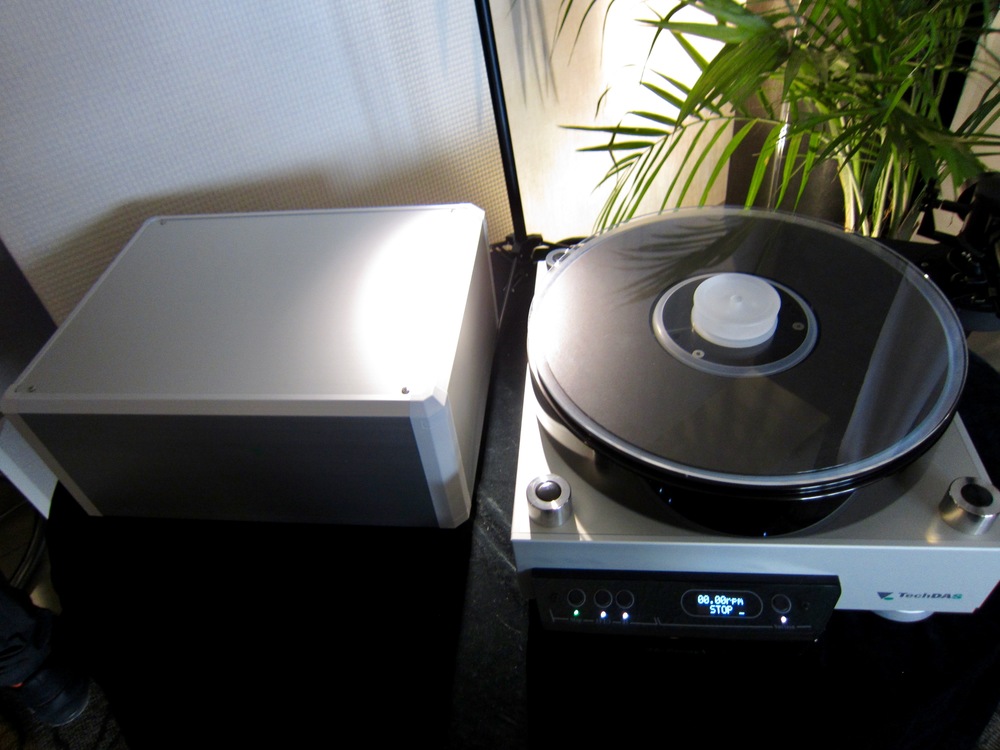 TechDAS Air Force V
TechDAS introduced a less expensive, more compact version of its remarkable Air Force turntable. Like its bigger brother, the Air Force V ($18,500 or $22,500 with the Graham Phantom tonearm) uses both an air bearing that allows the platter to float on a very thin layer of air, as well as a vacuum hold-down system to couple the LP onto the platter. A separate air pump unit controls both functions. Two 150-watt DC power amplifiers drive its synchronous motor. Unfortunately, it was on silent display.

NAD C 588 Belt-Drive Turntable Package ($799)
NAD has been producing high-value audio components for decades. (Like many, I began my audio journey with an NAD integrated.) At RMAF, NAD premiered its new C 588 belt-drive turntable package, which includes a factory-installed Ortofon 2M Red phono cartridge mounted on a carbon-fiber tonearm with both VTA and azimuth adjustments. The package includes an electronic speed control to isolate the C588 from nasties in the powerline and ensure precise speed. Its massive MDF base sports specially tuned vibration-damping feet to help isolate external vibrations; it also includes a thick non-resonant dust cover.

TW-Acustic Raven AC-1
While it’s not new, the TW-Acustic Raven AC-1 ’table ($15.5k) with Raven 10.5 arm and Transfiguration Proteus cartridge deserves high praise. It produced a highly engaging and naturally detailed sound in a system from The Voice That Is that included the new TIDAL Vinberg Mino speakers, and TIDAL electronics and cables. The reproduction of massed strings and voice were gorgeous with lots of air and detail. 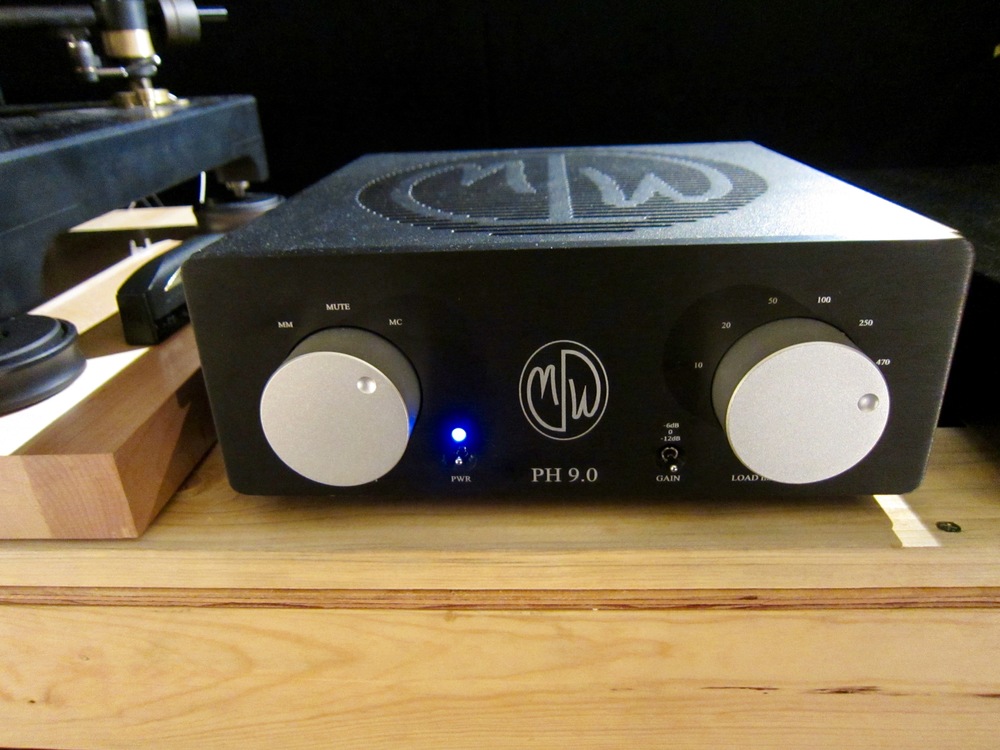 Best Sound (for the money): ELAC scored another win with its new Navis ARB-51 powered monitors with ELAC Alchemy DDP-2 and DS-2101-G. At somewhat more money, the Golden Ear Triton Reference driven by Hegel’s new H590 integrated and Mohican CD player with AudioQuest cables and Niagara 1000 was another winner.

Most Significant Trend: Preconfigured turntable packages from the ELAC Miracord ($499) to the SME Synergy ($26,800) make it easy for music lovers to enjoy high-quality analog reproduction without set-up fuss.