Covering digital products at RMAF requires spending more time listening to specifications and technology spiels than to music. And it means I must visit almost every room at the show. This cuts the time I can spend listening to music in any one room. But the rewards of covering the latest digital products far outweigh the downsides of truncated listening time.

RMAF provided enough new digital products to fill a show report several times over. Rather than a comprehensive report with abbreviated descriptions that have more in common with a laundry list than a show report, I’ve concentrated on the products I felt were the most important and will have the most impact on our audio future.

For most part, the stand-alone CD player is dead, but some manufacturers have revised the “CD player” into a DAC that can also read discs. One example of this is the Rega Saturn-R DAC + CD transport ($2995US). The Saturn-R includes four S/PDIF and one asynchronous USB inputs as well as a top-loading CD transport. It uses a Wolfson WM872 DAC that can handle PCM up to 192/24, and it comes with a dedicated remote control.

Sim Audio added the Neo 260D CD transport ($2000US) to their Moon series. Using Sim Audio’s proprietary CD drive mounted on a four-point floating suspension system, the NEO 260D has both S/PDIF and AES/EBU digital outputs plus both balanced and single-ended analog outputs. You can add a digital-to-analog converter ($1000US) that deliverss true 32-bit asynchronous processing along with two S/PDIF, two Toslink, and one USB inputs.

Marantz SA-14S1 Super Audio CD player ($2495US) includes two digital inputs, two digital outputs, and one USB input which allows it to function as both a transport and a DAC. It even has a USB-B port on the back that allows the SA-14S1 to support DSD over PCM. The SA-12S1 utilizes Marantz’ proprietary HDAM (Hyper Dynamic Amplifier Module), newly developed center-mounted disc drive mechanism, and torroidal power transformer made with oxygen-free copper secondary windings. 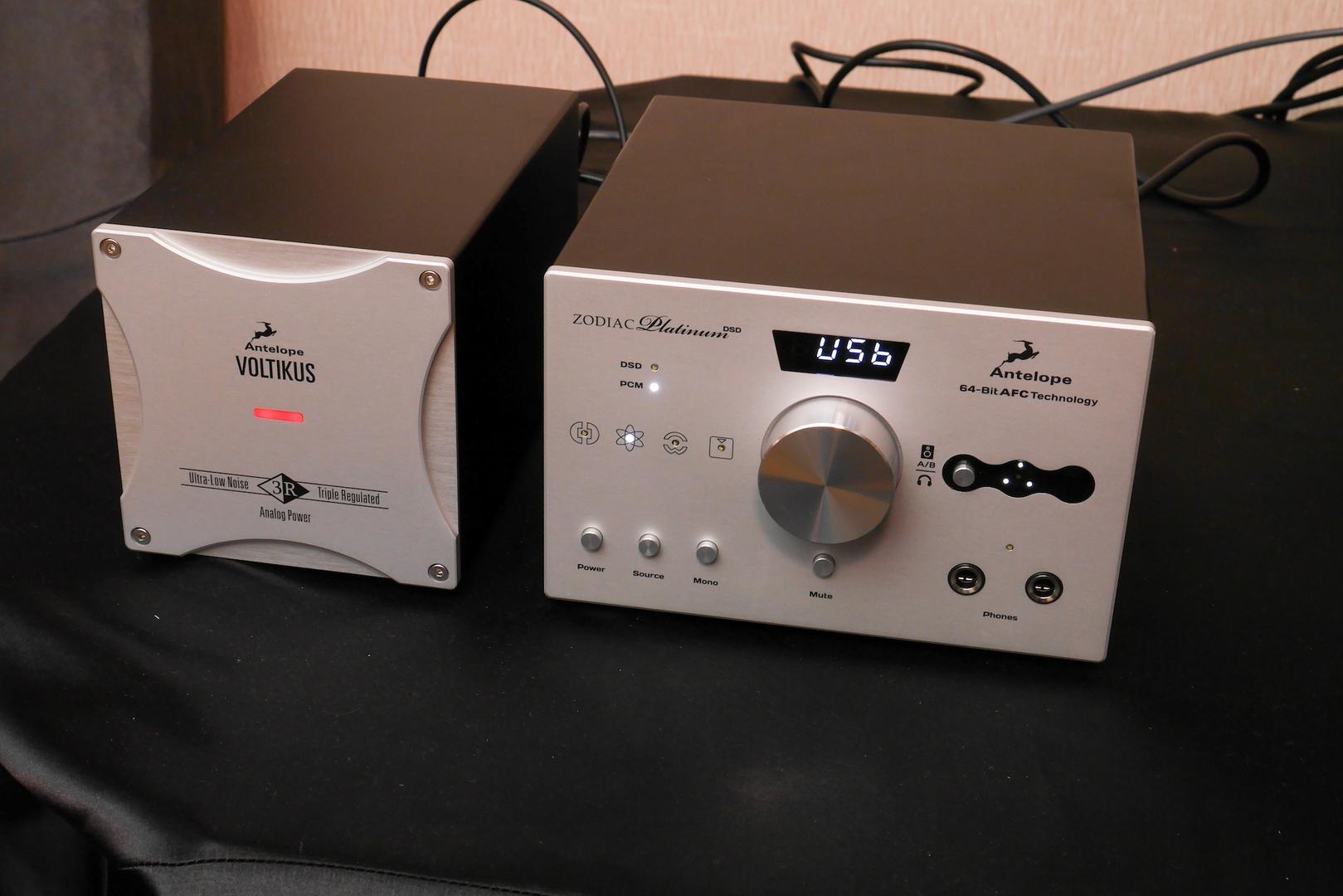 Bel Canto has gone upmarket with their new “Black” line of components. Designed to be used together, The Asynchronous Stream Controller ($20,000US) and PowerStream Monoblocks ($20,000US each) represent a new way of arranging components in an audio system.  With three boxes and only two connections, the Black system uses Bel Canto’s proprietary XStream fibre cable to connect the Stream Controller to the PowerStream Monoblock amps. With six digital inputs and balanced XLR analog as well as XStream outputs, the Asynchronous Stream Controller represents Bel Canto’s designer Jon Stronzer’s latest thinking on how to build a low-noise digital hub. 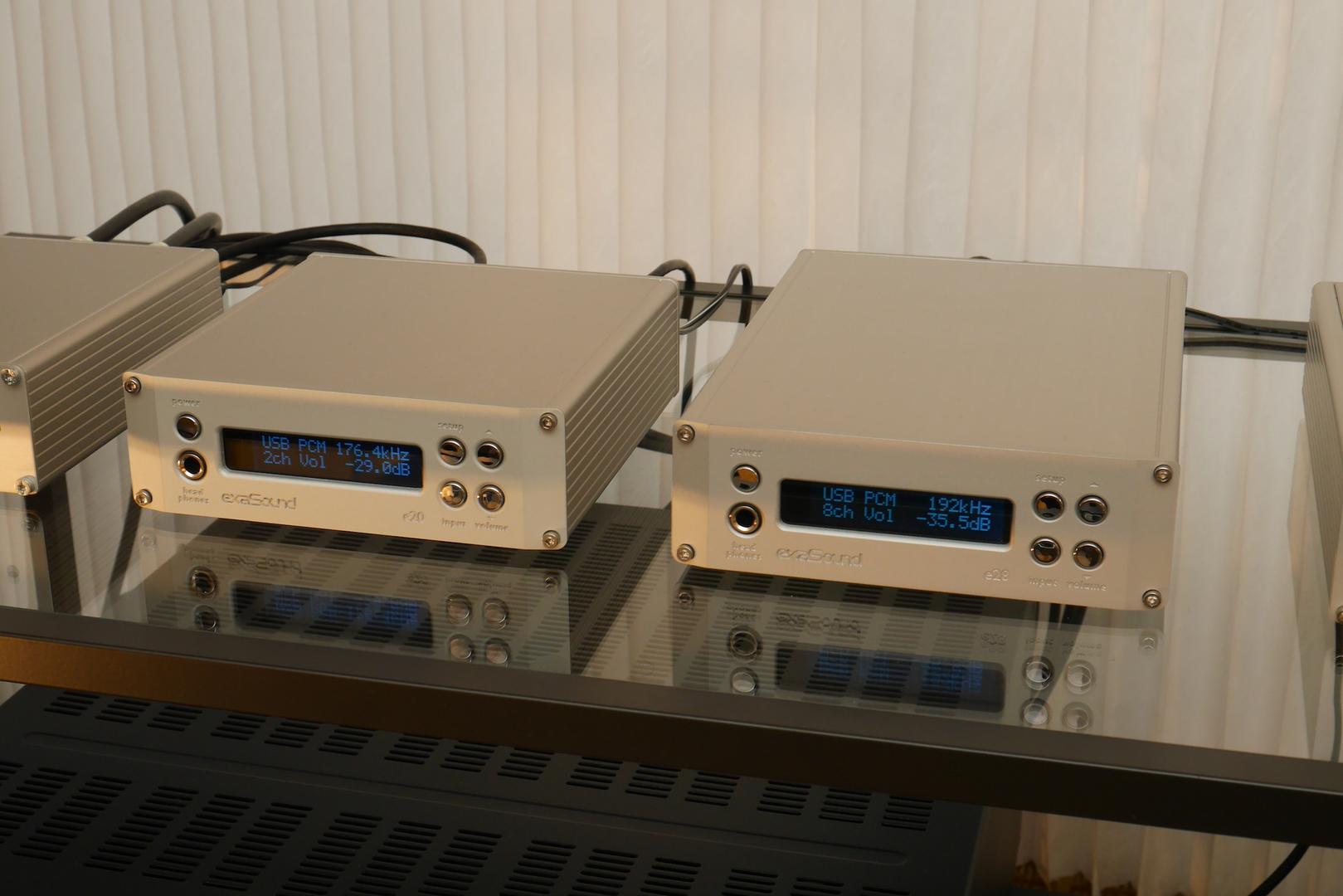 Building on the technology of their E20 DAC ($2899US), ExaSound’s new E28 DAC ($3299US) is the world’s first multi-channel DSD DAC. It supports DSD up to 12.28 MHz, DXD up to 352.8 kHz/ 320bit, and PCM up to 384/32. With automatic rate and sample switching, a bit-perfect custom ASIO driver for Windows, galvanically isolated USB, and an asynchronous USB interface, the E28 is based on the ESS9018 Sabre 32 reference DAC chip and offers eight discrete channels of analog outputs.

Hegel Super Headphone DAC ($399US) has a noise floor lower than 140 dB and supports up to 96/24 PCM. It has two outputs, one mini-headphone and the other optical digital, so it can serve as a USB to S/PDIF convertor as well as a headphone amplifier. With Hegel’s proprietary re-clocking and generous power supply, the Super is designed to drive even the most difficult headphones.

Resonessence Lab’s second new DAC introduction, the Herus ($350US), is a portable DAC that delivers big capabilities and sonics. It supports DSD 64x and 128x as well as DXD and PCM up to 382/32. It has no buttons or knobs, merely a USB input on one end and a ¼” stereo headphone output on the other. With better than 100 dB S/N, THD into 32 ohms of less than .005%, and a maximum output of 2.4 VRMS the Herus could replace many full-sized DACs.

AudioEngine’s latest DAC , the D3 ($189US), features support for up to 96/24 files via USB. Based around an AKM4396 DAC chip and LME49726 audio amplifier the D3 uses asynchronous USB and requires only 5 volts and 200 ma of power via USB to produce a maximum output level of 2.0 volts. It had no problems driving a pair of Audeeze LCD-2 headphones. 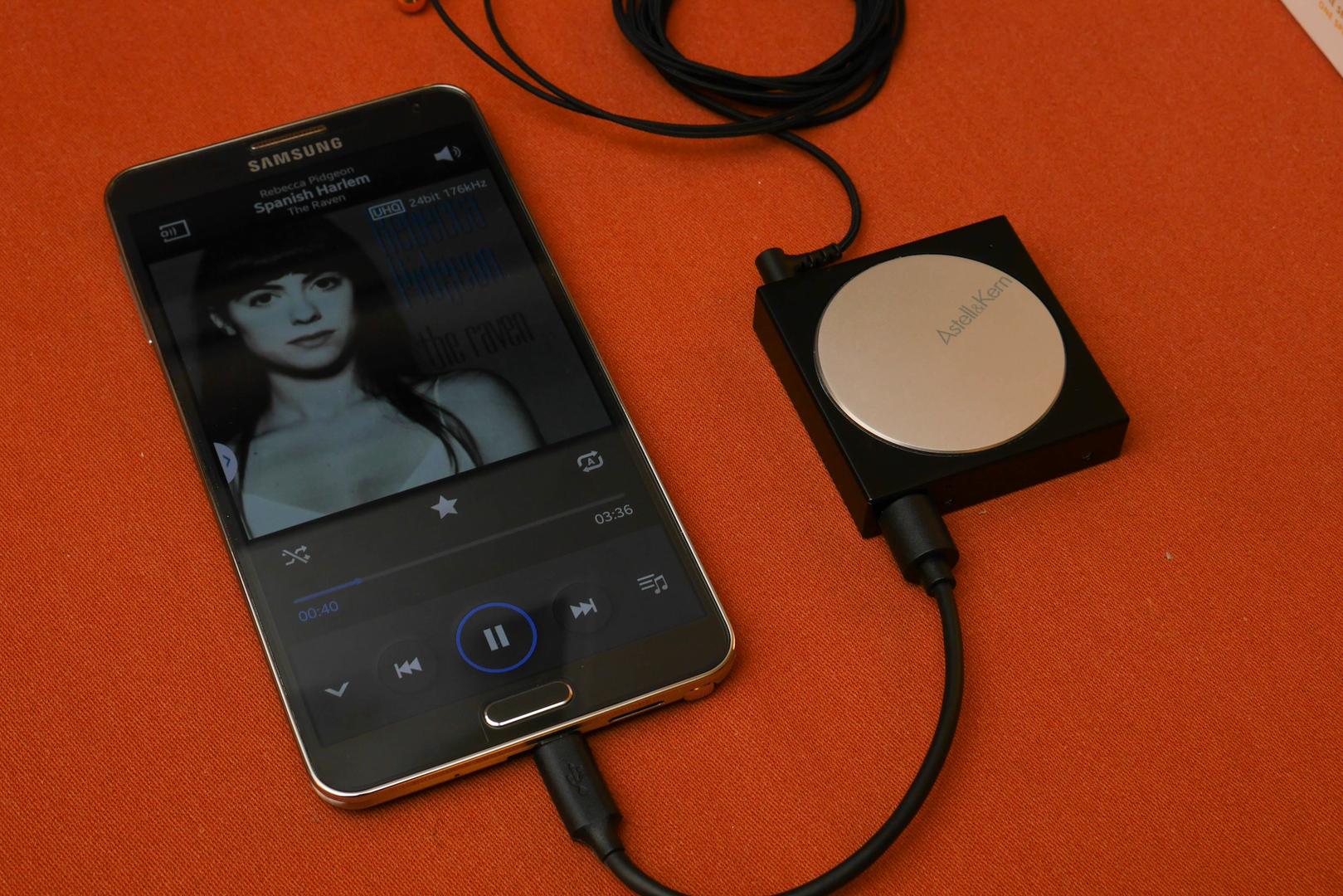 Astell & Kern’s AK10 ($299US) was designed to work with smart-phones. It has both iOS lightning connector as well as a micro USB for Android phones. With a built-in 1100mAh battery the AK10 delivers 11 hours of playback time and recharges in less than 3.5 hours.  Its Wolfson WM8740 24-bit DAC supports up to 96/24 files and delivers a maximum output level of 1.7 rms with an output impedance of 1.1 ohms.

ifi unveiled a raft of new digital devices including the iTube ($299US) tube preamplifier, iLink ($249US) USB to S/PDIF converter, iDSD (TBD – under $200) DSD/DXD/PCM battery-powered DAC, iPurifier ($99US) USB audio and power purifier, and iCAN (TBD less than $200US) battery-powered headphone amplifier. The iDSD and iCAN are part of ifi’s new Nano line of battery-powered, completely portable devices.

The first time I saw Blue Smoke Black Box was at the 2009 CES. Since then Blue Smoke has further refined their dedicated audio computer to the current Black Box II ($3995US) and companion USB to S/PDIF 382/32 Digital Output ($2995US.)  Based around a Haswell i7 Intel processor, Black Box II is fanless with an SSD drive and 8 GB of RAM, and runs on Windows 7.1 OS. The USB to S/PDIF unit works with any computer and operating system that outputs audio to USB.

The latest version of the Baetis Revolution II media computer ($2995), wired with Snake River Audio cables, looked and sounded like a serious audiophile product. With a published motherboard S/N figure of 108, the Baetis uses a S/PDIF rather than USB output and claims lower noise figures than any stock factory computer.

Sound Science’s Music Vault has evolved since I reviewed it in 2008. The current model, the M7 ($5500 w/3TB drive, $6600 w/6TB drive), supports local cloud back-up and streaming of Internet sources. Sound Science uses internal data storage instead of external NAS drives (although it supports NAS for back-ups) because according to designer Neal Van Berg, “Internal storage provides demonstrably superior sound.” The Music Vault supports USB 3.0 and 2.0 output as well as Firewire and even has a S/PDIF output.

The Channel D Seta Piccola DAC Buffer/Attenuator ($1599US) isn’t a digital product per se, but was created to be used with variable output DACs and DAC/preamps so that they can work without truncating bits due to excessive volume attenuation. The Piccola has 6 dB steps that deliver between -6 and -30 dB of volume reduction. It uses the same battery power system as the Seta phone preamp and has only 20 Ohms of output impedance.

PS Audio NuWave Phono Preamp ($1895US) delivers a one-box solution to archiving and playing LPs. It combines a state-of-the-art phono preamplifier with an A/D that supports both PCM and DSD digital outputs. With built-in cartridge loading, a passive RIAA curve, and balanced XLR analog outputs as well as line-level inputs, the PS Audiio NuWave Phono preamp can serve as the analog to digital hub for any audiophile who wants a high-quality bridge between their analog and digital sources. 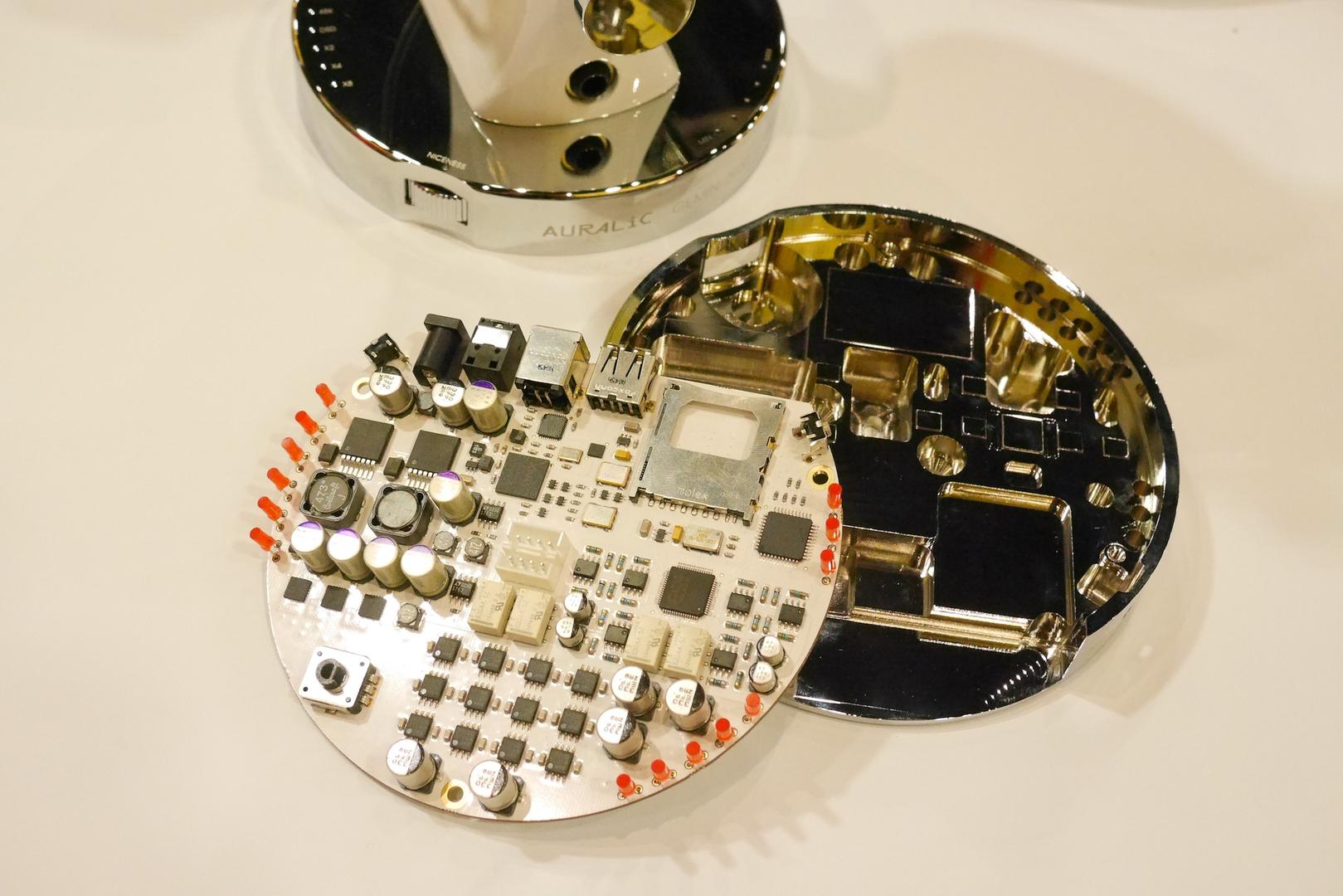 AURALiC’s Gemini 2000 ($1995US) combines a headphone stand with a DAC and headphone amplifier that can put out 2000 mW.  The Gemini 2000 supports DSD 64x and 128x as well as PCM up to 384/24. It has inputs for USB, Toslink digital, analog via mini-stereo, and a SD card reader slot. Available in five colors, the Gemini 2000 is much more than a beautiful object – it also sounded great.

Soon it will be easier for consumers to buy DSD music. Native DSD Music announced their new Internet site, www.nativedsd.com,  dedicated to high-resolution DSD music downloads. The PR kit included a USB card with sample files, many from Channel Classics. The site promises world-wide availability and multi-label availability and expects to be “live” by the time you read this in print.

Best Sound (cost no object) – The best sound I heard at the show was from a live concert sponsored by Ray Kimber and Kimber Kable that featured Jan-Ya Ling on piano and the Formosan Duo of Dr. Shi-Haa Wang and Dr. Yu-Jane Yang. The sound from the second floor balcony was glorious. 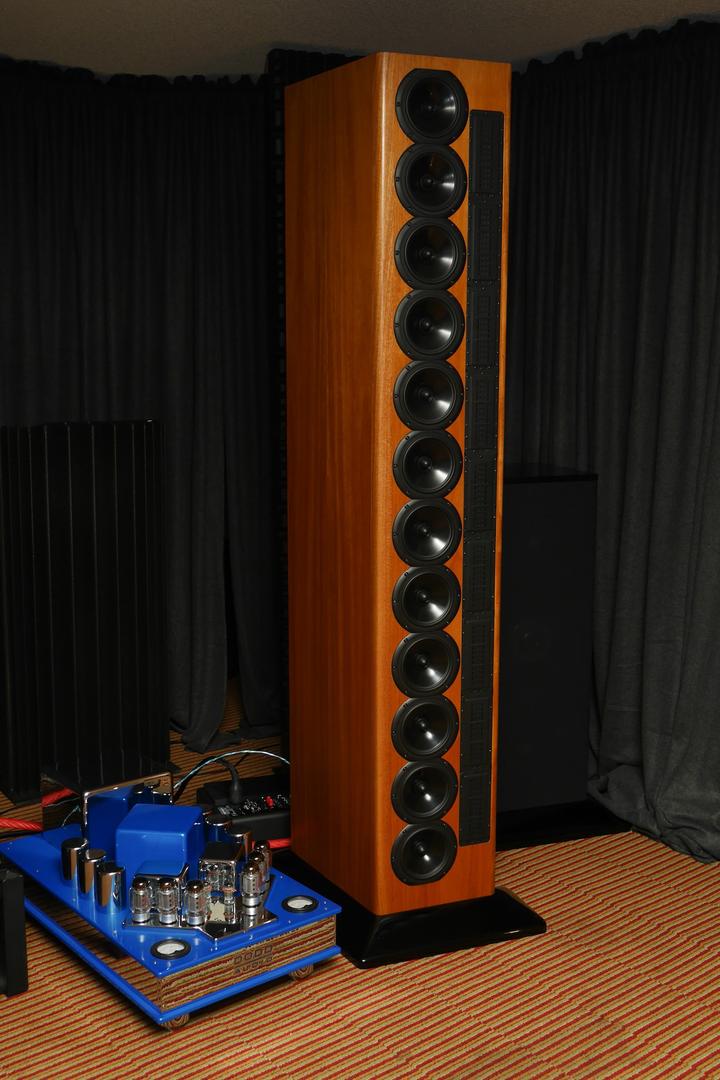 Best Sound (highest value) – The best budget sound at the show was in Marriot tower room 6009 on Friday at 10:30 PM when I hooked up the new Resonessence Herus ($350) USB DAC to my MacPro portable and played my own 5.6 DSD recordings. As I listened through a pair of Audio-Technica AW-3000 headphones I was transported back to the moment the recordings were made. The Herus produced a level of sound quality that rivaled any DSD DAC I’ve heard, regardless of price.


Most Important Trend – The inclusion of DSD capability in a majority of new DACs. It’s not a question of which is better, DSD or PCM, but making high-resolution music, regardless of format, readily available in its native format to consumers.