One of the highlights of THE Show Newport wasn’t a six-figure mega-system, but rather the show’s most modest hi-fi—the Riva Turbo X. Smaller than a loaf of bread, the Turbo X is a portable, self-contained audio system with Bluetooth streaming.

But why get excited about a wireless speaker system when this category has become synonymous with commodity-grade audio? Because the Riva Turbo X is as far from a commodity product as you can get; it embodies thoughtful design combined with a high-end aesthetic. The Riva makes good sound accessible to the masses, serving as an ambassador carrying the message that better sound equals more musical enjoyment. It also makes a great bedroom, kitchen, office, garage, or vacation system for audiophiles.

The Riva Turbo X was created by a group of people who are passionate about music (see sidebar). They envisioned a product that communicated the musical experience in an affordable and accessible product. The Riva Turbo X is all that and more. In fact, the Turbo X is a high-end system in miniature, masquerading as a lifestyle product. It’s also reasonably priced ($299), portable, and can run on its internal rechargeable battery for up to 26 hours. 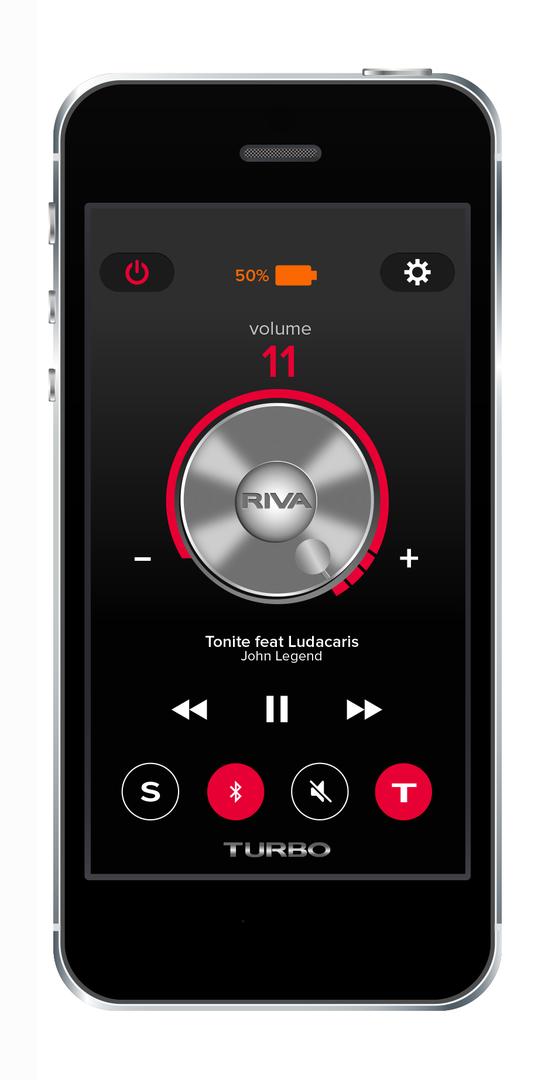 Operating the Turbo X is straightforward. A row of touch-sensitive capacitive “buttons” (actually depressions in the top panel) turn on the power, select the source, set up Bluetooth pairing, and adjust the volume. The depressions allow the unit to be operated by hand, and the capacitive aspect makes the top water-resistant. In a nice detail, the buttons illuminate when you bring your fingers near the unit. You can also control the Turbo X via a free app. It’s possible to disable the Riva’s top-panel buttons so that the unit is controlled only by the app—a nice feature if you have small children. Inputs include wireless Bluetooth streaming, a USB input (with an “A” type connector, which works with the USB cable supplied with an iPad or iPhone), and a stereo Aux input. A mini-USB jack is provided for software updates. The Aux input is great for connecting to a portable player such as an Astell&Kern (which is how I did most of my listening). There’s even a mode for increasing the analog input gain, a feature useful when connecting a lower-output source such as an inexpensive turntable that has an integral phonostage. The Turbo X can also function as a soundbar for multichannel audio (it has a dedicated “Surround” mode), and even as a smartphone speaker. Finally, you can charge your phone or tablet from the Turbo X’s high-capacity internal battery.

A top-panel button marked “T” engages “turbo” mode, which allows the system to play louder, but at the expense of battery life. This mode engages, in DSP, compression of frequencies below 160Hz so that the drivers aren’t overloaded by excessive excursion. Without this compression (non-Turbo mode), the Turbo X will produce an SPL of 92dB at 1 meter. With Turbo mode engaged this figure is increased to 99dB. Other than this “smart” reduction in dynamic range below 160Hz to protect the drivers when in Turbo mode, the Riva employs no other compression or equalization. My only complaint about operation is that the gimmicky “swoosh” sound when you engage the “turbo” can’t be turned off. I was also confused by the charging system, specifically the rear-panel “Battery” button. It must be in a certain position for the Turbo X to charge, but I could never tell if it was in charging mode or not.

The build-quality and execution are outstanding. The Turbo X has the look and feel of a product that has been refined through many iterations—not the first product from a new company. I particularly liked the rugged Cordura travel case ($29.99), which has a separate zippered pouch for the power supply.

The Turbo X employs three active full-range transducers, one front firing and one each firing to the left and right sides. Two passive radiators on the front and two on the rear round-out the driver complement. Three speakers may seem like an odd number, but the Turbo X is designed around one of the company’s core technologies, called Trillium, for which they were just granted a patent. Trillium uses digital signal processing to create a third channel from the incoming left and right channels, with the goal of creating a soundstage larger than is possible from conventional stereo.

All the drivers and electronics were designed in-house. The transducers are 60mm units with dual neodymium magnets, 25mm voice coils, and a frequency response of 60Hz–16kHz. The passive radiators have full frames, bobbins, spiders, and surrounds so that their motion remains pistonic. Many inexpensive passive radiators are simply diaphragms covering a hole. The drivers face in opposite directions (left and right active speakers, front and rear passive radiators) to cancel vibration. The enclosure is braced as well so that most of the energy generated by the transducers is launched into the room as sound rather than as enclosure vibration. Each of the three active drivers is powered by a 15W Class D amplifier from Texas Instruments.

So what caught my ear at the Newport show demo? For starters, this tiny system effortlessly filled the hotel room with full-bodied sound. There’s a cognitive disconnect when you look at the tiny Turbo X and hear truly deep and well-defined bass along with wide dynamic expression and a huge soundstage; it seems to defy the laws of physics. Not only that, but the Turbo X had a smooth and natural balance that seemingly conveyed lots of musical detail. It sounded like a quality separates system, not a $299 wireless speaker.

Exploring the Turbo X at home, I became even more enamored of this diminutive audio system. Not only does the Turbo X offer surprising bass extension and dynamics for its size, it has an extremely resolving and nuanced sound that beautifully communicates musical expression. The tonal balance is just right, with a clean and subtle treble. The top end lacks the hard sizzle (and rapid listening fatigue) of other compact portable systems. Despite its subtlety, the treble was surprisingly refined and resolved. Cymbals sounded like metal shimmering, not aerosol spray cans. The midrange was truly exceptional, with very low levels of coloration. Vocals seemed to “get out of” the Riva’s tiny enclosure, existing in space. This midrange clarity is no doubt due in part to the full-range nature of the drivers; there’s no crossover or discontinuity between disparate drivers. I listen to a lot of music on my desktop through a single full-range driver system (the amazing Audience 1+1 V2+) and I greatly appreciate the virtues of a full-range crossover-less transducer. The Turbo X has a coherence and openness in the midrange that you really have to hear to believe.

I noticed a significant difference in the bass response depending on where the Turbo X was located. When out in the open on a table, the bass was adequate. But with a wall behind it, such as on my desk, the boundary reinforcement really helps the Turbo X achieve its full bottom-end potential. Riva recommends placement near a wall or corner. On my desk, even a hard-rocking album like Jeff Beck’s Performing This Week . . Live at Ronnie Scott’s, with Vinnie Colaiuta’s cannon-like kick drum and Tal Wilkenfeld’s center-of-the-earth bass guitar, didn’t faze the Turbo X. Usually, turning up a portable speaker system results in mushy bass, clipping, enclosure vibration, and other signs of distress. Not the Turbo X—it reproduces bass and dynamics better than some small bookshelf speakers. Commendably, the bass was clean and articulate, with good pitch definition. I could hear individual notes, not just the fuzzy mush that is typical of small wireless speaker systems.

Another amazing thing about the Turbo X is that its tonal balance doesn’t change much when you are off-axis from the unit’s front. You can walk around the room and hear essentially the same balance no matter where you are. There’s a bit more treble sparkle and openness if the Turbo X is positioned near ear level, but I suspect that the system was voiced so that you don’t need to be on-axis.

The Riva Turbo X is fun to use, rewarding to listen to, and makes a great second system for audiophiles. But more importantly the Turbo X is a glimpse into the high end for the mass-market listener. It brings audiophile values to a product that fits the way in which many non-audiophiles listen to music.