During several recent audio shows, Revel has teased out what I would term a “slow reveal” of elevated-performance versions of its mid-priced Performa3 series. To Revel’s credit, the intro of these new speakers was not accompanied by the “limited” or “signature edition” puffery that normally attends the unveiling of upgraded models. Actually, there wasn’t much in the way of fanfare over their debuts. But clearly these were no longer “stock” Performa3 models; nor were they sufficiently elite to re-certify as Revel Ultima2’s. Naturally, there were the usual gimlet-eyed skeptics, who pointed to the familiar cabinetry and began pondering what could possibly justify the hefty increase in price—it turns out, quite a lot. Welcome to Revel PerformaBe.

The PerformaBe series comprises two models—the $4000 M126Be two-way compact reviewed here, and its floorstanding big brother, the F228Be tower ($10,000). Visually, the clean familiar look has aged well. PerformaBe taps the same smooth, curvilinear lines of the Performa3, but embellishes the top panels with metallic-black painted accents and raised electroform badging. The enclosures have been models of rigidity from the beginning, and thus no changes were required.

But the source of the M126Be magic lies under the surface, with its all-new drivers and crossover network. Copping the leading role is a powerful 1″ beryllium-dome tweeter driven by hefty dual 85mm ceramic magnets. Why beryllium? Because it offers up to four-and-a-half times the stiffness and three times the damping of aluminum or titanium tweeter diaphragms. And it does so at only half the weight. Translation: speed, linearity, and extension. 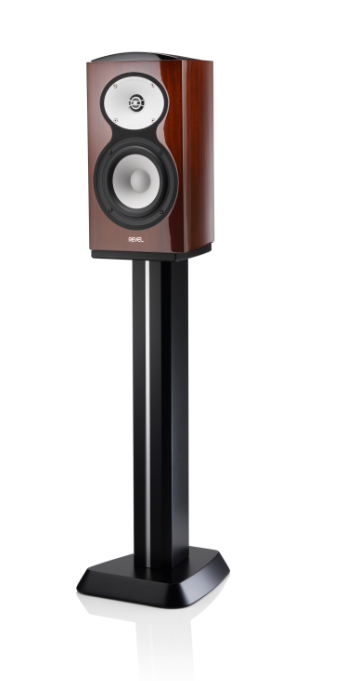 The mid/bass driver is a 6.5″ Deep Ceramic Composite (DCC) aluminum-cone woofer. Many will recollect that parent company Harman/Infinity has worked with ceramic composites for some time, but Revel’s Principal Engineer Mark Glazer explained that this cone design is new for the PerformaBe. Glazer added, “Our process uses an intense plasma discharge to fuse a deep ceramic coating on both sides of the aluminum core. The deep ceramic layers sandwiching the aluminum core provide constrained-layer damping that moves break-up modes well outside the passband.”

Complementing the tweeter is a fifth-generation ceramic-coated, cast-aluminum acoustic-lens waveguide. Compared with earlier versions, the waveguide flare has been refined (thank you, computer modeling) to improve directivity-matching to the mid/woofer and, by repositioning the lens, to improve high-frequency linearity. In Revel’s view, this adds up to greater efficiency, less compression, improved dynamic range, reduced distortion, and increased power handling. The high-order crossover networks were also refreshed for this series and utilize film capacitors and air-core inductors in the midrange and tweeter circuits. In the case of the M126Be, the crossover point is at 1.7kHz, a relatively low figure for a two-way compact but consistent with the added output furnished by the tweeter waveguide. PerformaBe series speakers are available in a choice of four high-gloss finishes. Handsome magnetically attached grilles are included, of course.

Turning to sonic performance, to describe the M126Be as merely the pepped-up and spit-polished version of Revel’s nifty two-way M106 does not give this new compact its musical due. Yes, in the broader sense of tonal neutrality Revel has stayed the course. Music reproduction through the M126Be will therefore be familiar to M106 owners. Familiar, but then the differences begin making themselves apparent. Along with the recognizable fireworks and butt-kicking dynamics—Revel staples—is a newly revealed silken refinement that’s rare in this segment. Low-level resolution, timbral realism, and top-end air and speed have improved across the board. Bottom-octave reproduction is a little out of this compact’s weight class, but it rarely puts a foot wrong in the bass octaves that it does cover. And it achieves all this without trading away its midrange vitality and resolution.

In character, the M126Be is a forwardly voiced speaker, with an ever-so-slightly cooler timbral cast. Any sub-par recording looking for a place to hide had better find another speaker. That’s not to say the M126Be manifests an aggressive temperament, but neither is it subtractive or forgiving in the upper frequencies. A well-recorded violin or coloratura soprano will gloriously soar to the heavens. A sub-standard or tipped-up recording will be exposed, warts and all.

Midrange and treble response is immediate and immaculate. The new Revel projects a broad, relaxing listening sweet-spot that doesn’t insist on a headlock (with shoulder harness) to enjoy music. Some may recall that beryllium tweeters of a “certain age” weren’t always easy to live with (they were fast and extended but could sound brittle and bleached). Revel’s design is airy and open and wellbehaved. Particularly welcome is a near total lack of driver localization; the tweeter integrates with its mid/bass partner with a precision that is point-source-like. These characteristics, plus its estimable micro-dynamic composure, make the M126Be a vocal lover’s dream with both male and female singers. A tough recording for a small speaker is the romantic velvet baritone of Dean Martin singing “I’m Confessin’ That I Love You” from Dream with Dean; yet his voice is reproduced with a presence and chesty resonance that compacts of this size often fail to capture. Another example is the excellent reproduction of the weight and rich overtones from the baritone and bass backup singers that anchor Chris Jones’ “No Sanctuary.”

Dynamically, the M126Be has near-imperturbable midrange output so that even under punishing conditions it retains its tonal voice. Transients are fast but not forced or needling. When I listened to trumpet player Clark Terry, his horn’s attack was crisp and focused but not steely or shrill. And during Lew Soloff’s trumpet solo on “Autumn Leaves,” there was appreciable bloom, even if traces of dynamic compression seeped in at high output levels. The M126Be is a loudspeaker that will make you think it has no limits. It does, of course, but few will want to test them.

The low-end response from this bass-reflex design was quick with little indication of nefarious port artifacts. Ray Brown’s acoustic bass on Soular Energy, for example, was richly defined in both pitch and grip. Befitting the speaker’s small footprint and two-way config, the bottom octave was a bit beyond the Revel’s reach. Thus, Janne Mertanen’s piano soundboard didn’t fully open up with sustained resonance. And don’t expect to measure the diameter of a bass drum during Winds of War and Peace or the chest size of bass-baritone Bryn Terfel, either. Still, there was perceivable output into the 50Hz range, and some satisfying glimmers of activity below that. More importantly the M126Be revealed a vast vocabulary of mid- and upper-bass expressiveness. Even though the M126Be can’t quite get to the resonant bottom of a baritone sax’s bell during the Jen Chapin cut “It Don’t Mean Nothin’,” the timbral distinctions that define the character of instruments in this range were rewarding in their complexity. Similarly, during Neil Young’s “Old Man,” the kickdrum had appreciable weight and texture. Truly a recording of a bygone era, I wouldn’t doubt that the front drum skin had been removed in order to stuff a thick blanket inside for damping. This is a good moment to note that, although the M126Be is relatively easy to drive at 86dB sensitivity, the wider performance envelope of its drivers means the speaker craves superior and substantial amplification to show its best, especially in low-end control and treble transparency. Beryllium tweeters expect no less. 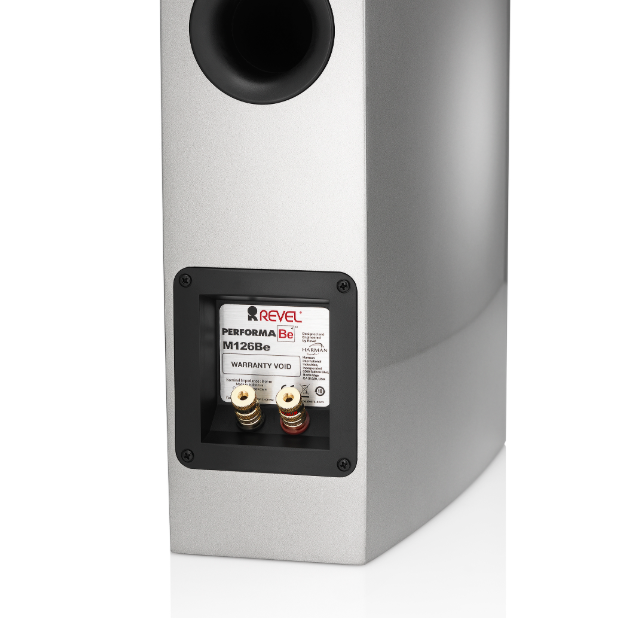 Parenthetically, it’s always a good tip to experiment with distance from the wall behind a speaker. Small compacts crave room reinforcement to fill in low-frequency soft spots. Also, while the M126 is satisfying on its own terms, I did get an opportunity to play it with the superb GoldenEar Technology SuperSub X. Given the Revel’s already honest midbass, dynamics, and output, this sub proved to be a terrific 2.1-channel pairing, with seamless integration.

Checking boxes of individual sonic criteria is one thing, but it’s the immersion and scale of soundstage presentation, linked with image specificity, that are the M126Be’s most impressive virtues and make it the speaker it is. Most compacts excel at image detail—are born with it—but often this is the result of an overly bright tweeter, iffy inter-driver coherence, or just a light tonal balance. That’s not the effect I got listening and living with the Revel. Rather, the M126Be is more about a continuous musical embroidery of naturally scaled images within an ambient sound space. This is exactly what I got as I listened to Diana Krall’s “I’ll See You in My Dreams”—there was the sense of sitting-in with the band, feeling the wash of ambience energizing the space, the excellent upper-bass pitch definition, and the bouncy steel-string guitar solo that breaks from the speaker within its own acoustic pocket.

Small speakers tend to play “small,” but the Revel creates a stage filled with musical images of credible scale and scope. While explaining the reason for this effect can be dicey, clearly the transducer upgrades and new profile of the waveguide are factors, as is Revel’s long-standing philosophy of designing speakers with smooth in-room power response and good on- and off-axis behavior.

Sometimes I think Revel is far too humble and just doesn’t toot its own horn enough. And yes, there is a significant bump in price between the Performa3 M106 and the Performa M126Be. However, if you are willing to open your wallet a bit wider, the sonic rewards span all criteria, and are especially audible in resolution and transparency. Quicker, better balanced, with enhanced output and grander limits, the Performa M126Be is one of the most rewardingly musical small speakers I’ve yet reviewed.