Sometimes all it takes to identify the essence of a loudspeaker—to glimpse its soul, if you will—is to hear the way it reproduces the relative simplicity of a single instrument. If you’re a guitar player, as I am, then Guitar Pleasures by classical guitarist Michael Newman [Sheffield] is one such recording. Michael Hedges’ Aerial Boundaries [Windom Hill] is another. But the same lesson can also apply to any solo instrument, from violin to clarinet to piano; when a speaker gets your instrument right—the timbre and attack, the harmonics and resolution, you know it. The acoustic guitars of Newman and Hedges were the first tracks I heard when I fired up the Revel Performa F52, and I immediately felt the hairs rise on the back of my neck.

While the Revel “house” sound has without exception commanded my respect, it has at times kept me at arm’s length, not as purely involved in the music. Revel models skewed toward the clinical, not reproducing the musical event as much as diagnosing it. The Performa F30 largely changed my perception, but though it was a standout in its price range it had a couple of colorations (a bit of midbass thickness and treble hardness) that I thought should be corrected.

The F52 has addressed these issues and then some. Of all the Revel loudspeakers I’ve heard, including the Ultima models, the sound of the F52 turns out to be the most rewarding to listen to and the most elusive to describe. It may be more cultivated than its predecessor, but don’t for a minute think that it’s a bashful speaker. It’s a chameleon in its ability to adapt to the environment and color of a recording. It won’t romanticize a poor recording, however it will take a naturalistic one (like the Newman) and render more detail and timbre more clearly than you might have thought possible.

At its core, the F52 is a control speaker. Instrumental images were as delineated as Waterford-cut crystal, and never wavered in their soundstage position. The F52 articulates and resolves detail equally well at nearly all levels, and nothing sounds generic. For example, you won’t just hear a guitar being strummed, you’ll be able to hear the box of the instrument and know whether it’s a large-bodied dreadnought or a smaller archtop. Likewise, when you hear Mary Chapin- Carpenter sing “This Shirt” from Party Doll [Columbia], you won’t merely follow the beat of a kickdrum behind her vocal; you’ll hear the combination of the impact and the quality of padding on the foot-pedal mallet as it strikes the drumhead.

Tonally, the Revel is a near-paradigm of neutrality. Though its presentation is slightly forward, its middle and upper middle ranges are open, with none of the cupped-hands shoutiness that can smear vocal images. While the F52 shares traits with earlier Performa models, its performance at the frequency extremes makes it an entirely different animal. It outputted solid response well into the upper 20Hz range, and its low-bass articulation and extension were the sonic equivalent of a speaker sporting a set of six-pack abs. Even on powerhouse symphonies like Vaughn Williams’ Antartica [Bakels/Bournemouth, Naxos] there was no sensation of the bass drums, kettledrums, or organ being belched out from a port. These instruments were reproduced intact—timbral character, speed, and decay characteristics unblemished.

I’ve “dinged” many a metaldome tweeter in the past, but the wave-guided aluminum-dome that Revel has designed has an airiness, a lack of constriction or material coloration that seems to allow the high frequencies to integrate with the mids with a continuity I’ve not often heard from multiple-driver systems. The effect is clear: High frequencies don’t congregate around the baffle; instead, they bloom outward. The openness of the highs, the sensation of music arriving naturally at the ear rather than being slingshot from a mechanical apparatus, was superior. Male and female vocals emerged cleanly from a single point in the soundspace rather than with ghostly halo trails at their peripheries. It’s a form of edge detail that elegantly feathers-in an instrument’s immediate boundaries without overetching the image. Precision without artifice.

Dynamically the F52’s output across the octaves was nothing short of Armageddon-like—an impression gleaned when I began listening to the new Rosanne Cash disc, Black Cadillac [Capitol]. For example, during “God Is In The Roses,” the electric bass puts out so much energy that I could almost feel the recoil in my gut. Likewise, Benmont Tench’s piano solo during “The World Unseen” has a jawdropping moment where he hammers his piano into a lower-octave nosedive that could have popped the nails from the floorboards. The Performa F52 may be the first speaker I’ve evaluated that reproduced the full weight and spectrum of the grand piano—an instrument that more than any other separates the contenders from the pretenders.

Although the F52 already performs at a very high level, I still don’t believe its treble is the last word in transparency and speed. It lacks the near-supernatural ease that is commonplace in the ribbon or electrostatic world. The soundstage width was notably wide, and images often gave the impression of spreading beyond the outer boundaries of the speakers themselves. However front-to-back dimensionality, at least in the smaller confines of my listening room, was merely run-of-the-mill. (Note: Midbass sometimes got a little heavy in my room, but switching the LF adjustment from Normal to Contour dropped the 40–50Hz range down about 2dB.)

The Performa F52 is a loudspeaker with the muscle and drive to reproduce grand music on a vast scale; at the same time, it has the grace and delicacy of a solo performer. Its balance is exquisite, its composure under stress unflappable. While crowning any component north of six grand a “bargain” might furrow the eyebrows of some, a brief audition should win over even the most hardboiled skeptics. Overall, this is the best speaker that Revel has ever produced, and one of the great high-end values. 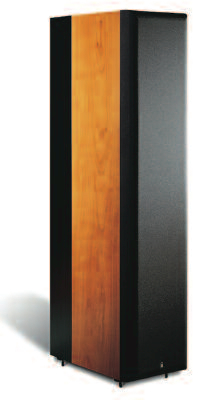