It might be a common perception, but a subwoofer’s role isn’t limited to just adding an octave or so of bass response and going boom. Ideally it should be all about the quantity and quality of low frequencies that restore a bass-shy system to a musical equilibrium—a balance that permits the full breadth of the recording to be realized. In short it’s not just how much but how well. If this sounds like a distinction in search of a difference, then you’ll need to spend some time with the REL T7i.

As many enthusiasts are aware, REL makes some of the classiest subwoofers in the high end. The T7i is no exception. Finished in a deep, glossy black (white is also available), and discreetly appointed with solid aluminum accents, the T7i is not much larger than a postage stamp (OK, at about a square foot it’s a little bigger than that). The T7i does its business with a forward-firing 8″ driver which is backed up by a bottom-firing 10″ passive radiator. This alignment is a reversal over its predecessor, the T7, which placed the active woofer in the downward position with the passive firing forward.

As REL woofer-in-chief John Hunter described to me, the new T lineup benefitted from the development of the Series S line. The Series S reminded him not only of the importance of both a lighter/stiffer driver but of the issue of self-quieting, which Hunter describes as design and engineering “intended to produce a cone/driver that starts and stops well and immediately quiets down and does not continue ringing.” Basically, no overshoot. And, given the choice between lighter and stiffer, stiffer was the big winner sonically. Nonetheless, the T7i still employs a composite of lighter-weight paper—REL even took the carbon black out of the paper because it added 1.4 grams per cone (who knew?). For stiffening the cone, REL designed specially prepared alloy center caps that overlap much of the surface area of the diaphragm. This innovation improved damping and resulted in slightly less weight and almost three times the rigidity. Additionally, cabinet depth was added to properly dissipate the backwave. And cabinet wall mass was increased to a full one inch. The fine Class AB 200W amp was left unchanged.

The back panel houses rotary settings for output plus the tiniest 39-step increments for adjusting the crossover over a range of 30–120Hz. There are dual low-level RCA inputs, plus an LFE, but the high-level input is and has always been the preferred installation. A lengthy Neutrik connector is provided for this purpose. It carries within its jacketing four wires for connection to an amplifier’s speaker taps. Famously, REL subs do not use high-pass filters—the main speaker’s performance envelope will remain unaltered. There’s a phase toggle, as well. 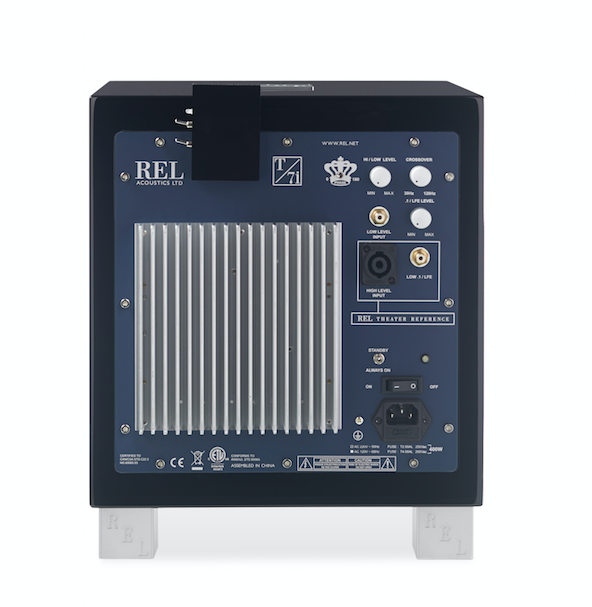 Corner placement is suggested by REL to begin, facing on a room diagonal. This not only maximizes room gain but allows “for the most linear low bass wave launch…the ability to tune the sub to the axial node of the room, or longest throw distance.” In my small room, this procedure works but don’t be shy about experimenting.

I ran the T7i with a range of compact loudspeakers that included the B&W 805 D3, Revel Concerta2 M16, Elac Uni-Fi UB5 (reviews forthcoming) plus my own ATC SCM20SL pro-monitor. These all have varying amounts of bass extension, roll-off characteristics, and sensitivity—differences that were easily compensated for with the T7i crossover and output settings. The low 84dB sensitivity of the sealed-box ATC, for example, required bringing up the output slightly, while the deeper extension and superior efficiency of the ported B&W necessitated a lower crossover setting and a slight reduction in output.