For a company that produced just five turntable models over its first 20-something years—1973’s original Planet (with a steel and aluminum platter), the original aluminum platter Planar (only 200 units made), followed by the long-in-production Planar 3 and 2 (the first commercial models sporting glass platters)—Rega has been on a roll this past decade, with a flurry of new designs I find it hard to keep pace with.

That said, Rega doesn’t release new models for the sake of it, just when significant improvements to previous ideas merit it. Having reviewed five Rega ’tables for this publication between 2012 and 2014, it’s been a while since I’ve taken a spin with a new Rega—a gap now bridged with Rega’s latest mid-priced design, the P(lanar)6.

Priced at $1595 with no cartridge—or $1995 (Exact mm), $2195 (Ania mc, which is how I’m reviewing it), or $2495 (Ania Pro mc) when fitted with one of three Rega cartridges—the P6 falls smack in the middle of Rega’s current lineup; with the Planar models 1, 2, and 3 below it, and the 8 and 10 above. Given the excellence of the P6’s performance, Rega’s deserved reputation as a high-value option remains solidly assured. 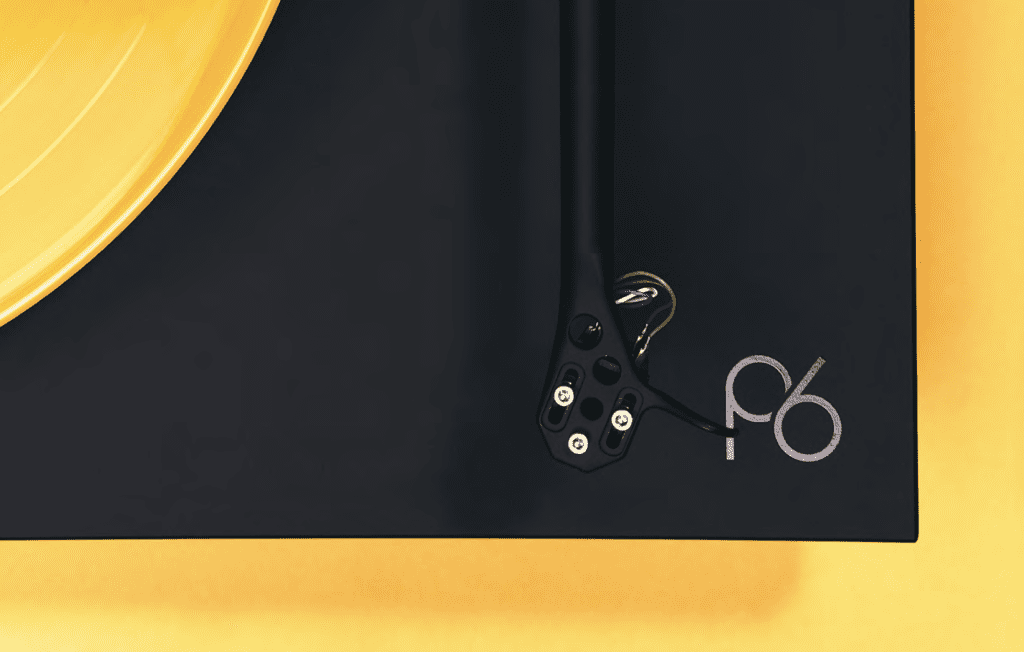 Should any reader need a refresher, Rega’s longstanding design philosophy is pretty straightforward, and rather contrary to the rest of the industry’s thinking. Rega’s iconoclastic founder and owner Roy Gandy firmly believes that lightweight, rigid plinths retain less airborne and playback-generated resonance than massive designs do, and therefore allow the entire package to more accurately track the miniscule canyons pressed into vinyl LPs.

This isn’t the place to weigh in on the myriad pros and cons of various turntable design philosophies. Like most opinions, everybody’s got at least one. And as I’ve written before, my lengthy experience with analog rigs—from the earliest Regas, Linn LP12s, and Goldmund Studios I once sold at retail, to the countless designs reviewed over the years, to my current reference Basis 2200 Signature/Vector 4 ’arm—I’ve found great musical satisfaction in wildly different approaches to turntable design. Be they lightweight on fixed plinths, like the Regas are, or massive designs with fixed plinths, or lighter suspended designs or heavier…the list goes on ad infinitum, as does the range of materials employed.

Besides, I really couldn’t add much to what my TAS colleague Paul Seydor so thoughtfully explained in Issue 311 in his review of the Helius Alexia turntable and Omega tonearm, and its accompanying sidebar “Vinyl Problems and Solutions, Theoretical and Real,” which I highly recommend reading.

Focusing here on Rega, what I will report is what I and many others have found compelling about these designs over the decades. Despite the fact that Regas (I’m generalizing here) don’t provide the deep bass weight and power of some, nor the nth degree of dynamic extremes and resolution of others, they do possess a lithe, catlike nature that transmits the ebbs and flows—as some call it, rhythm and pace or “toe-tap-ability”—of music in a way that makes them highly enjoyable to listen to.

For the past several years refashioned Rega models have benefitted from the company’s pedal-to-the-metal, no-expense-spared exploration of design approaches, which resulted in 2017’s limited-edition Naiad turntable. Rega’s website states that over the ensuing years the company “has made and sold more than 20 Naiads at a cost of £29,999 each.”

As it is with Rega’s RP8 and 10, lessons learned from the Naiad are applied to the P6.

Trickling down from the RP10 and 8 models are, to quote Rega’s design brief, the “ultra-lightweight Tancast 8 polyurethane foam core plinth (a material developed for the aerospace industry). This material is sandwiched between a new HPL (high-pressure laminate). HPL is exceptionally thin whilst extremely rigid and is presented in a stunning Polaris matte grey finished with high gloss polymer black edge trim.”

This marketing speak doesn’t really convey the effort that Rega put into utilizing the Tancast 8 and HPL materials, or how surprisingly lightweight the plinth, sans platter, is when you’re holding the thing—it feels as if it could float away with a strong breeze.

And for those who care about visual aesthetics, I can’t argue with Rega’s description of the finish. Although it’s quite simple, the P6 offers an unusually handsome take on the classic Rega profile. (The P6’s plinth is rectangular, while the 8 and 10 utilize the company’s wavy and even lower-mass “skeletal” plinth.)

Naturally enough the plinth incorporates the “double-brace” technology found for some time on Rega’s top-tier models—a metallic, oval-shaped, Swiss-cheese-like sandwich that neatly buttresses the top and bottom of the base between the ’arm mount and motor hub, greatly enhancing rigidity.

Also significant is the new sub-platter, which is fabricated from a single piece of machined aluminum on which the glass platter sits. This is a serious step up from the injection-molded plastic sub-platters found on earlier generation Rega models.

Rega’s been using its flywheel platter for some years now, in both glass and ceramic versions. The P6’s is glass and comprises two conjoined sections fabricated from “float” glass—a technique wherein molten glass is floated over molten tin in order to create the flattest possible surface and uniformity of thickness. To form the flywheel platter Rega joins two separate pieces of float glass, bonding the secondary “ring” platter to the underside of the main platter, thus adding mass to the outer circumference to increase the platter’s natural flywheel effect, improving speed accuracy and stability.

In addition, each of Rega’s newest model 24-volt motors is hand-tuned and matched to its own Neo outboard power supply and drive pulley. When I speed-tested the P6 via a strobe disc, I found the speed to be essentially on-point right out of the box.

Known for being very low friction in both the horizontal and vertical planes, Rega ’arms are employed by other turntable makers, who have wisely decided that they can’t better these fundamentally excellent designs for the money. The RB330 tonearm found on the P6 was designed using computer technology, resulting, says Rega, in a redistribution of mass that minimizes possible points of resonance throughout the armtube. Like all Rega ’arms, much hands-on labor goes into their construction.

Whatever cartridge you choose to mount on the RB330, these improvements to ’table and ’arm are significant both on paper and in practice. Now let’s discuss the sound with the Ania moving-coil of this all-Rega package.

Given our seemingly endless era of coronavirus—little to no travel, live concerts, or restaurant visits—what can any self-respecting audiophile better do with all that unspent cash than buy more records? And as we know, there’s never a shortage of choices to trigger one’s salivary glands.

The first thing I noticed immediately about the sound of the P6/Ania, and that proved to be a hallmark of this combo’s sonic signature, was a degree of bass depth, weight, and overall tonal richness I’d previously realized only from Rega’s upper-end models. This, without trading off Rega’s classic strength of musical agility.

For example, on Ella, The Lost Berlin Tapes, the piano’s lush, forward-rolling staccato intro to “Good Morning Heartache” is followed by Ella’s uncommonly intelligent phrasing that then weaves into and out of that piano phrase. Here you get it all: The necessary musical ebb and flow that casts a kind of magic spell, along with a fleshed-out tonal range and dynamic expressiveness that bring feeling to the lyrics (“Stop haunting me now, can’t shake you anyhow”). The P6/Ania’s combination of pace, speed stability, and tonal naturalness brought this rediscovered concert vividly to life.

Or take the five-LP Bob Ludwig remastered edition of Wilco’s Summerteeth. “Can’t Stand It” rips from the start with a freshness and clarity that seemingly connect much more directly with the original tapes. Chiming guitars, chugging bass, thumping drums, the almost alarming sense that Jeff Tweedy’s vocal cords are about to stretch just a bit too far; all are presented with a newfound sense of unbridled energy in the remastered vinyl edition, which is beautifully rendered by this Rega rig. Likewise, the harmonic layering on “She’s a Jar,” the depth and power of the bass, and the overall dynamic freedom proved revelations at the P6’s price point.

Likewise, on the wonderful Tom Petty set Wildflowers & All the Rest, the immediacy as well as relaxed naturalness of the performances were wonderfully rendered by the Rega gear. Acoustic guitars shimmered like a dreamy mirage; Petty’s sweet tenor was pure, upfront, and uncluttered; the fundamentalist drumming, akin to the ultimate garage band, seemed to have the time of its life.

Another recent record that beautifully illustrates what the P6/Ania is capable of is the Berlin Philharmonic’s superb direct-to-disc recording of Bruckner’s Wagnerian Symphony No. 7. The last BPO performance conducted by the then 90-year-old Bernard Haitink, this magnificent recording is not of the sonic spectacular variety, but is instead one of those recordings that is so natural it comes about as close to the real thing as is possible from vinyl. An LP playback system must be accurate to properly render the deep silences, dynamic subtleties, harmonic layering, depth of field, and sweep of this music.

Retuning to well-worn platters from my collection, The Grateful Dead’s “Box of Rain” from American Beauty allowed the Rega to strut its stuff with this song’s country-tinged blend of driving rhythm, layered vocal harmony, and twanging guitars, while the following “Friend of the Devil” had me smiling as I marveled at Phil Lesh’s beautifully melodic, groove-laying bass licks.

Finally, one record I return to over and over is clearly not the finest recording on my shelves. Way more importantly, however, it is among the music I cherish the most: Martha Argerich’s DG recording of Ravel’s enchanting Gaspard de la nuit. Yeah, I know, it’s a pianistic tour de force. But that’s not why I love this piece. Argerich’s virtuosity is undoubtedly the conduit for the music, but she never draws attention to how she’s playing, gifting us instead with an artistry that shows why this nocturnal music has been a lifelong staple of her repertoire.

I’ve probably played this LP on every turntable that’s been through my system over the past quarter-century. Needless to say with varying results. The LP can sound a bit thin and clangy, harsh as breaking glass, when not well tracked, or, while never exactly beautiful, neutral enough to allow this special woman’s artistry to shine past the recording’s technical shortfalls. Which, I’m pleased to report, is how the Rega set performed—conveying the silent background from which the piano emerges, the nuanced dynamic shading, cat-like trills, explosively percussive dynamic punctuation, and sheer beauty that makes Gaspard special to me. All the while the Ania on the RB330 tracked gracefully, without any audible distress even during the most challenging passages.

Wrapping up, while the P6/Ania doesn’t deliver the ultimate punch, detail, or transporting emotional thrill of the very finest vinyl playback gear money can buy, that’s hardly the point, or the design goal. The point is that like all of the best and longest-lived audio gear, the P6 compels us to play record after record, to revisit music we love, and explore music we have yet to discover. To say that the P6/Ania sets a new standard for Rega ’tables at this price point is not damning with faint praise; it’s instead high praise for what Rega has accomplished, and continues to, as its Naiad technology keeps expanding throughout the company’s formidable lineup.

Robert Harley previews the Göebel Divin Noblesse Loudspeaker and the […]