The Episode, the latest addition to the Reference 3A speaker lineup, may be fairly summed up as the Grand Veena’s smaller brother. Positioned between the Veena and Grand Veena it is said to offer an easier amplifier load and greater sensitivity. The Episode uses an 8″ full-range version of the Grand Veena’s 6.5″ main driver, but the 1″ tweeter, the Murata super-tweeter, and the Bybee Quantum Purifier are common to both.

To describe the Episode’s design as a two-way box speaker with a super tweeter would be superficial at best. Its raison d’être is a wide-range driver featuring a flared woven-carbon-fiber cone similar in shape to that of an exponential horn, except that the degree of flare is even more extreme than that, and is denoted as “hyper-exponential” by the folks at Reference 3A. The rationale for the flare is to improve high-frequency response. The wide-range driver is operated wide open without a low-pass filter. Measured by itself on axis (by disconnecting the tweeters), its frequency response was reasonably flat to 5kHz with extension to about 10kHz without evidence of any significant breakup resonances. Beyond 10kHz, the response starts rolling off quickly and exhibits a “last-gasp” breakup mode centered at around 14.5kHz. Wide response and no crossover network translate into uniform phase response and excellent time domain behavior. The fly in the ointment for any wide-range driver is treble dispersion. The phase plug helps some, but even so, moving the microphone to about 10 degrees off-axis produced a dramatically different frequency response with a gentle roll-off starting at around 2kHz.

Measured full-range, by reconnecting the tweeter and super tweeter, the Episode produced a surprisingly uniform response at 10 degrees—even better than that measured on the tweeter axis. While the on-axis response highlighted a slightly hot treble range, off-axis the response gelled, producing one of the most uniform response curves I’ve measured to date at my listening seat. Not surprisingly, the owner’s manual recommends that the speakers “be positioned straight out to the general listening area with the tweeters on the outside and no toe-in to the listening position.” This raised an eyebrow initially as I am accustomed to optimizing the soundstage by tweaking three parameters: distance to the rear wall, spacing between the speakers, and toe-in angle. In fact, the classic approach is to toe-in speakers so that the tweeter axes intersect in front of the listening seat. That worked very well with the Esoteric MG-20s, so naturally I felt that one of the available degrees of freedom was being taken away from me and I was determined to experiment in this regard anyway. What I discovered was that while a toe-in did help expand soundstage width and depth, the resultant sound wasn’t as smooth and a bit too hot in the treble for my taste. Since the 1″ tweeter rolls in around 3kHz (a first-order network), when listened to off-axis (e.g., 10 degrees), it contributes most of the upper midrange and presence region output at the listening seat. I think that this is preferable—cleaner-sounding relative to having the wide-range driver contribute much in the way of direct sound over these octaves. Conclusion: The folks at Reference 3A know what they’re talking about. I suggest that you closely abide by their set-up recommendations.

The 1″ tweeter features a silk dome and a copper Faraday ring. It is built to Reference 3A’s specifications in Asia and is currently modified in-house for more controlled back-chamber pressure-release to minimize dome breakup modes. The Murata super-tweeter features a spherical piezoelectric diaphragm and is actually advertised as a “harmonic enhancer.” It presents a bit of an enigma in that it kicks in around 19kHz and its range extends to over 80kHz, well beyond the limits of human hearing. Precious few of us can hear anything above 15kHz, and with some program material (standard Red Book CD), there is absolutely nothing above 22kHz anyway. So it’s fair to ask if there’s a benefit to such a device. When I reviewed an earlier stand-alone version of this super-tweeter some years ago, I found its effect to be addictive. It helped bridge the gap between live and reproduced music. When I disconnected the super-tweeters, the effect was akin to turning off the lights—the presentation became darker and less present. It stands to reason that, in the context of the Episode, the Murata adds a dose of sonic Viagra to what otherwise would have been a soft and laid-back treble range. 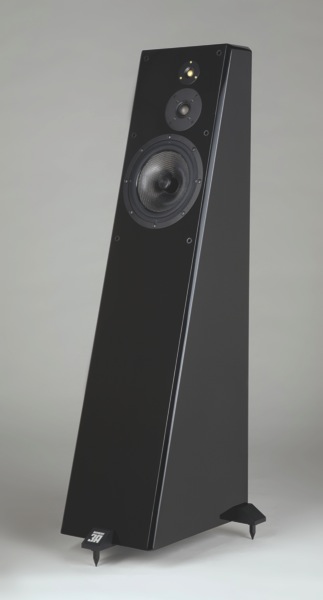 The Episode benefits significantly from attention to detail, and I mean lots of little details. Reference 3A’s Tash Goka reminded me of the famous quote that God is in the details, and added in jest that the details get so much attention probably because there is no crossover to play with. The main driver is mechanically grounded to the cabinet’s spine brace. In addition, it is treated with Anti-Vibration Magic Fluid, which is applied much like paint in thin layers to the voice coil, cone, and shorting ring to dampen microscopic vibrational energy. Cabinet walls are constructed with different thickness of boards, ranging between 25 and 40mm, to minimize cabinet vibrational resonances. Highest-quality components are used, including Bybee Quantum Purifiers and Mundorf caps. Current production further benefits from several upgrades. Internal wiring is now PTFE-coated continuous-cast pure copper. Optimal wire thickness is used for each driver: 0.6 mm for the tweeter and 0.8 mm for the wide range. Soft brass screws are used to fasten drivers for reduced driver/frame resonances. The floor pads and cones are now made of brass and the cones are larger and height adjustable. The binding posts and jumpers have been upgraded as well and I’m told that all connectors, internal wiring, and metal driver parts are now being cryogenically treated.

Note that a long break-in period is mandatory. With time, a slight veiling of the soundstage lifted much like the morning fog. And the midrange smooths out as well. A fair amount of effort was expended searching for an optimum amplifier match. I tried both the ModWright KWA 150 and the Pass Labs XA30.5 amps, and in both cases I admired the resultant bass reach and definition. Bass response in my room was flat to 40Hz, and I found it hard to believe that the Episode is in fact a bass-reflex design. But it is, with a box tuning of around 45Hz. Jazz bass lines were tightly controlled with almost no added cabinet signature, making it possible to resolve pitch modulation to a degree rare in a box speaker. Yet I was still unhappy with soundstage dimensions and, mainly, my inability to connect with the music. The tonal balance deviated slightly from neutral with a perceived lightening up of the lower midrange and upper bass. For all these reasons it seemed logical to try a tube amp. In went the Audio Space Reference 3.1 (300B) power amp and you should have heard the resultant “whoosh” sound as I instantly got sucked into the performance. There is no doubt in my mind that the Episode needs and wants a tube amp to sound its best. OK, so bass control might suffer a bit, but it’s a small price to pay for a truckload of sonic magic. Note that the impedance magnitude over the frequency range of 150Hz to 20kHz is quite flat and tube-amp-friendly, lying within a narrow band of 5.5 to 8.5 ohms. Expect only a minor interaction with a tube amp’s source impedance.

With tubes firmly in control I could report that image outlines were solidly anchored within the confines of the soundstage, and fleshed out in palpable fashion. Depth perspective was still diminished relative to what I was able to obtain with the more expensive Esoteric MG-20, which has raised the bar to new heights when it comes box-speaker soundstaging. The Episode sailed right through female vocals with excellent timbre accuracy and emotional expressiveness. Male voice was uncolored—a testament to a lack of resonances in the lower midrange. String tone was luscious, and harmonic colors were portrayed vividly. There was plenty of detail in evidence, yet at no time did I perceive the presentation to be hyper-detailed. The music boogied along naturally and scored high on the listenability scale.

I absolutely hate a comatose-sounding speaker, and let me make this perfectly clear, the Episode is far from zombie-like in its reproduction of dynamic contrasts. In fact, the dynamic range from soft to loud was reproduced with plenty of conviction. However, there was occasional trouble during loud program peaks, at which point the upper midrange and presence regions congested and turned hard and shouty. This was an issue with both analog and digital program material and with both the Audio Space and higher-power ModWright KWA 150 amplifiers. The upper midrange is the transition region where the 1″ dome tweeter kicks in. I wondered if the tweeter was being sufficiently protected by a first-order network, which forces the tweeter to work harder with decreasing frequency. Obviously, it is working from a power-handling standpoint, but its distortion spectrum appeared to rise significantly whenever it was hit hard. If you’re looking for a speaker to deploy in a large room, I suspect the Episode is not for you. 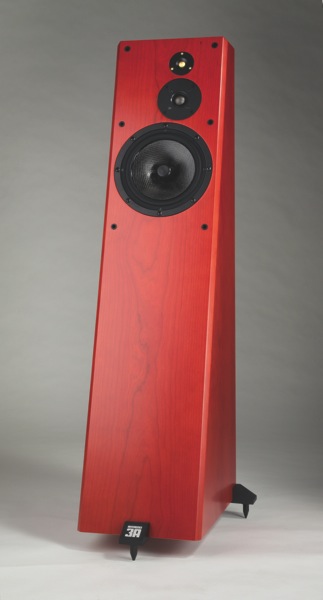 The demise of box speakers has been greatly exaggerated. You would think that, at least in the high end, high-tech speakers such as electrostatics and planar/ribbon magnetics would have displaced cone-driver technology. But electrodynamic speakers survived the challenge because they can be miniaturized to blend into a smallish domestic environment or be made large enough to reach levels of bass extension and dynamics unattainable otherwise. In addition, many audiophiles prefer a box speaker’s soundstaging with its pinpoint imaging precision. The Episode is a case in point. No, the midrange lacks electrostatic transparency, and neither does the dome tweeter approximate the performance of a ribbon transducer. When set up as recommended, there’s much to cheer and not much to complain about. The Episode is a complete package, well-engineered and executed; it sounds coherent and musical—felicitous on female voice and in harmonic colors. And you don’t get cheated at the frequency extremes. In particular, bass definition and extension are excellent—as good as they get at this price point. Then there’s the Murata super-tweeter, which serves to animate the upper registers. When driven within its dynamic comfort zone, the overall presentation can best be characterized as eminently listenable—lively and engaging without being assertive. At its asking price, the Episode represents a superb deal for music lovers and audiophiles alike.