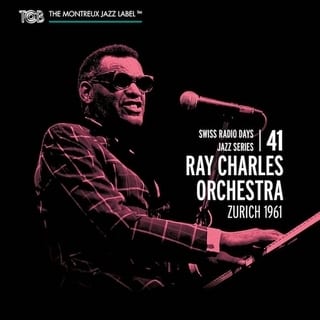 By 1961 Ray Charles had already changed the face of pop music by transforming Hoagy Carmichael’s “Georgia on My Mind” into a soul ballad and Percy Mayfield’s “Hit the Road, Jack” into a gospel rave-up. When he arrived overseas for a fall tour, he brought a big band—by then a true anomaly—and renewed purpose to continue breaching artificially constructed musical barriers. The lineup included a number of Quincy Jones cohorts (check out Hank Crawford’s impossibly tender alto sax lead on an instrumental version of Erroll Garner’s “Misty”), and Q himself arranged several tunes in the Orchestra’s repertoire. Issued now in vivid remastered sound, a tour-opening set at Zurich’s Palais des Sports captures the musicians’ collective energy and smarts and the heat of the fabulous Raelettes (with incendiary vocalist Margie Hendricks). But the story is Ray in spectacular voice, from his gospel importuning in a searing vocal set-to with Hendricks on “My Baby” to the depth of his lowdown blues readings of Arlen-Mercer’s “Come Rain or Come Shine” and his own “I Believe to My Soul.” Past and present meet the future with this recording.