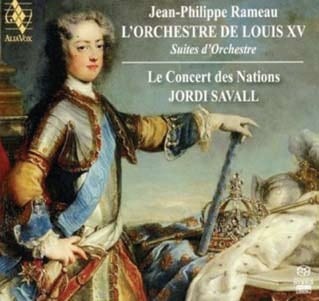 The almost suspiciously prolific Jordi Savall has delivered another brilliant program of some of the most interesting Baroque music ever written, four suites from Rameau’s ballets and operas. It’s raucous, it swings, it woos, it brays, it marches, and it laughs. Rameau’s writing flashes like Vivaldi in a lightning storm, and sometimes spoofs the entire Renaissance period. Toward the beginning of Les Indes Galantes, you’ll swear the Chieftains made an appearance, and another part sounds like an escapade from Offenbach’s Gaite Parisienne. Harmonies behave badly, tempos and moods change like the weather, and there’s off-beat playing that brings to mind head-banging with a powdered wig. Who knew there was this much humor and dottiness underneath all those solemn Baroque ruffles? There’s little polyphony, too—nary a fugue in sight. It may not wear quite as well as Bach’s Brandenburgs, but it’s a hoot! The surround encoding is especially realistic and involving, making the whole shebang that much more entertaining. (The harpsichord continuo is very light—it’s meant to be heard more by the orchestra, for ensemble’s sake). The booklet has about 90 pages of excellent notes, too.