Imagine a company that claims its $1295 loudspeakers make “real sound for real people,” and what’s likely to be your gut reaction? At the very least, it’s safe to say you wouldn’t expect such a speaker to sound “great.” And as a rule you’d be right.

Well…meet the exception. PSB has created a transducer of incredible value for an incredibly reasonable price: the aptly named Imagine X2T Tower. (Indeed, it is already an award-winner—a Reviewer’s Choice Award from Soundstage! HiFi—and will likely get a Golden Ear from me and earn well-deserved spots in our next Buyer’s Guide and Editor’s Choice lists.)

In appearance, this four-driver three-way is anything but flashy: a slim, compact, dual-front-ported, quasi-D’Appolito (midrange on top, dual woofers on the bottom, tweeter in between) floorstander about three feet tall, with an MDF enclosure that comes in any finish you want as long as it’s black ash. Perhaps the X2T’s main distinguishing feature is the mustard-yellow hue of its twin woofers, whose cones are made of injection-molded, clay/ceramic-reinforced polypropylene. But what the X2T lacks in eye-catching looks, it more than makes up for in ear-pleasing sound. 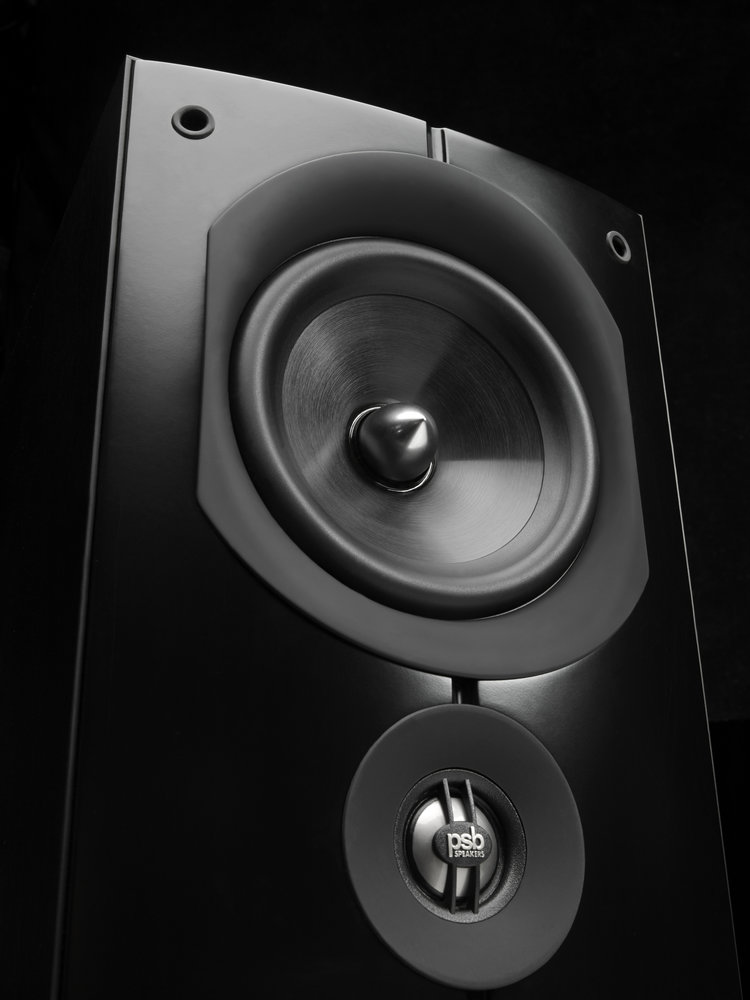 Famous for being persnickety when it comes to sonic quality, PSB founders Paul and Sue Barton—the husband-and-wife duo whose initials form the Canadian company’s name—have consistently found ways to bring high performance to lower price points. Their goal for the Imagine X line was simply to offer the most accurate sound for the money. Naturally, various design and build compromises came into play, with careful consideration paid to what could be stripped away from PSB’s more expensive models, and what had to be retained.

Luckily for listeners (particularly those who are just getting started or who might not have the deepest pockets), PSB does its homework. In a pioneering move, in 1974 it became the first loudspeaker company to use the advanced acoustical labs housed at the National Research Council Canada (NRC) for product development. Since that time, the PSB design team has devoted many years to research at the NRC facilities, where the focus has been as much on how we perceive sound, as on what sounds good. PSB’s double-blind testing eliminates listener bias, enabling researchers to gain insight into which sonic characteristics are most important—and which can be more or less left out of the equation.

Beneath its unpromising exterior the X2T is a highly engineered speaker artfully designed to play to the ear. Geared to getting the most out of the midband, this three-way uses a midrange driver that is housed in its own enclosure for ideal dispersion and minimized distortion at high SPLs. Moreover, the driver features an injection-molded, poly-filled carbon-fiber cone designed especially for the X2T. The one-inch tweeter dome is made of pure titanium, with a phase plug that is intended to help extend high-frequency response and control breakup (in addition to protecting the dome).

In part because of their surprisingly powerful bass (which we’ll get to in a moment), the X2Ts should be placed away from walls by three feet or so—to help minimize room reinforcement, especially in small-to-mid-sized spaces. Solid-state amplifiers probably are the way to go for better grip on the woofers, and (once again) to help offset some of this transducer’s inherent low-end emphasis. For this review, I used the Odyssey Audio Stratos monoblocks fed by an ARC tube preamp and phonostage.

Before delving into my listening notes, I feel compelled to share one of the most striking discoveries I experienced listening to the X2Ts. In spite of their darkish overall balance, these speakers can be quite transparent—that is, they regularly reveal a given recording’s strengths and weaknesses. As a consequence, sound quality varies widely and (naturally) from disc to disc. For example, the X2Ts really elevated their game on certain extremely well-recorded selections, such as the Analogue Productions 45rpm reissue of the Rachmaninov Symphonic Dances, where (despite some slight, yet attractive depression of the brilliance range) their beauty, resolution, and power were reminiscent of much more expensive speakers.

According to the PSB’s website, the X2T’s new 5¼” midrange driver features a novel shape and filleted surround intended to optimize the reproduction of voice. And, indeed, vocals generally proved to be a strong suit. Madeleine Peyroux’s soulful rendition of Leonard Cohen’s tune, “Dance Me to the End of Love,” for instance, had a surprising measure of the smoky sweep and gentle swing that it has through JV’s superb $220k Raidho D-5s. However, the PSB’s darker, “bottom-up” balance was also evident on occasions, giving something like Pete Seeger’s sunny tenor on The Weavers’ classic “Guantanamera” (from the group’s live 1963 Carnegie Hall reunion LP) a decidedly baritone tint that it doesn’t have on the Raidhos (and didn’t have in life).

On the other hand, Louis Armstrong’s trumpet—which plays into the PSB’s wheelhouse—on “Stars Fell on Alabama” from Ella and Louis [AP] blew me away. (Then again, it would be a sad speaker day if Satchmo’s playing didn’t shine.) On this same album, the recording quality of the accompaniment varies, and here it often faded far into the background. (I had the image of Oscar Peterson’s piano being played timidly, unobtrusively in a corner, as if he didn’t want to detract from the main event.) This wasn’t really the speakers’ fault; they merely became the “messengers” of what had been recorded. Although such transparency to sources is far from unique, it’s still pretty impressive in $1295 loudspeakers.

The X2T’s primary strengths lie in the power range and the bass, where it can really turn heads. This little speaker delivers surprisingly dense tone color and hefty, extended low end—an unexpected feature in such a package at such a price point. Because bass is something audiophiles tend to drop big coin for, the X2T’s quality in the bottom octaves is a rare treat that absolutely sealed the deal for me. In definition and solidity, the X2Ts may not deliver the kind of bass you can sit on, but its bottom octaves are still unusually full, powerful, and nicely differentiated in pitch.

Actually, the slight predominance of the two 6 ½” woofers (each housed in its own separate acoustic chamber) produces what I’ve already said is a bottom-up sound. Whether or not you like this kind of bass-centric balance, it is hard to deny that it can add lifelike richness and body to the presentation. In general, I found it to be rather pleasing.

I appreciate accuracy, but I also like a little heft and warmth with certain styles of music, some rock ’n’ roll or pop, for instance. So I did some 80s throwback listening (and 90s, too). Much of REM’s Life’s Rich Pageant on MoFi vinyl powered through with exciting energy and drive. On the spare ballad “Swan, Swan, H,” Peter Buck’s acoustic guitar resonated beautifully with realistic articulation. Marshall Crenshaw’s “Someday, Someway” on MoFi was also reproduced with impressive accuracy on jangly guitar, jingly bell, and bass guitar. And in spite of Crenshaw’s somewhat limited range, the X2Ts really allowed the emotion of his voice to shine through. On Dead Can Dance’s “Spider Strategem,” percussion had relatively crisp snap and the tabla beats thrilled, creating a pleasing counterpoint to the ethereal vocals. The track sounded at once heavy and light—and quite agreeably so—despite some murkiness in the bottommost octaves. (I’d estimate that the bass goes down into the upper thirties or low forties before nose-diving.) As I’ve already noted, some of the X2T’s finest moments arrived with Rachmaninov’s Symphonic Dances and Earl Wild’s piano and Arthur Fiedler’s Boston Pops ensemble on Analogue Productions’ great reissue of the RCA Rhapsody in Blue. (Classical music seemed to be another forte for the X2Ts.) These famously well-recorded masterpiece’s strengths were revealed in all their regal glory, though here and there winds, strings, and higher-pitched percussion could have used a little more energy, air, and sparkle in their top octaves.

In staging, the X2T is decidedly upfront, though still expansive. The soundstage might not be the deepest around, but in almost all cases the imaging of singers, instruments, and players was pretty precise, offering greater sonic verisimilitude. The sax, horns, and bass on The English Beat’s classic “I Confess” on MoFi vinyl dazzled with full, and quite realistic, exuberance.

As impressive as the X2Ts are, some lambs had to be sacrificed in order to get so handsomely to this price point. Though they don’t lack speed of attack, the X2Ts aren’t the lightning bolts that some (much pricier) transducers are; nor do they have the same definition and articulation of such big-bucks speakers (although this was more apparent on certain instruments and recordings than others). At times, as I’ve said, I was a little hungry for more soundstage depth. And the reproduction of upper harmonics left a bit to be desired, with a general feeling of rounded softness in the brilliance range and shading in the treble that made some instruments either fade down or sail past like Macy’s Thanksgiving Day floats on an overcast November morning.

But I wouldn’t want to dwell on these shortcomings. With the X2Ts, you get your money’s worth and then some. Exceptionally well engineered for their price, these speakers play with a midrange focus and naturalness, and a bass-range power and resolution that simply aren’t available in most other loudspeakers at this price. They really deliver the goods, especially on well-recorded music, be it classical, jazz, or rock ’n’ roll. Vocals, strings, piano, drums, low-pitched winds, and brass tended to have the greatest accuracy and realism, but the X2Ts provided surprisingly faithful reproduction of most recordings.

As easy as these speakers are to enjoy—and especially given their unbelievably high value—they certainly live up to PSB’s marketing message: “real sound for real people.” I loved ’em.