Very early on in my TAS tenure, in Issue 259, I had the pleasure of reviewing the original Sprout integrated amp, and it delighted me so much I bought the review sample. So when I found out there was an updated and upgraded Sprout100, naturally I was intrigued. After reading and editing so many reviews from TAS writers, then later having the opportunity to peruse their reviews of the next-generation versions of the same products, I now get my turn to take that route. It feels like a milestone, and happily it’s been rewarding to discover that the new li’l Sprout100 delivers an outsized array of big improvements both inside and out. Not only does this 100Wpc successor pack double the prior model’s power, it also exceeds it in sonic prowess and flexible functionality—whether you dig digital, analog, or both—while adding a few other new small yet significant details. Both Sprouts were conceived by Scott McGowan, PS Audio founder Paul McGowan’s son, who also serves as sales director for the Boulder, Colorado, company. Clearly the McGowans and their team paid attention to customer feedback for the next-gen Sprout100’s product development.

In form the Sprout100’s clean, retro-inspired aesthetic remains the same—as do its weight and diminutive dimensions. I’ll admit, as I have before in these pages, that I’m a sucker for sexy design—in addition to great sound, of course—so this compact amp appealed to my eyes and hands before my ears. Adorned with a real-walnut top and trimmed in solid aluminum, it strikes an elegant balance between cool and cute, between natural wood and streamlined machine. The front panel features two machined-aluminum rotary knobs—one for stepped volume control, power on/off, and bass boost on/off, the other for input selection (vinyl, analog, digital, Bluetooth). There is also a ¼” headphone jack (an adaptor for 3.5mm is included) on front. The volume knob turns smoothly but lacks a line to show its degree of rotation. Being unsure of its level, I hesitated at times to crank it up, as it kept turning and turning. This odd, if minor point aside, the Sprout100’s operation couldn’t be more convenient or user-friendly, amounting to a quick push of a button or turn of a knob. No impenetrable deep-dive menus or complicated touchscreens here. The Sprout100 now comes with a remote control for basic functions; the original was strictly hands-on in operation.

On the old model, the power switch was a toggle on the back panel, i.e., out of sight, so I would have to put my hand on top to check the unit’s temperature to determine whether it was on or off. (Also neither model has a dedicated AC mains switch.) A small (literally) but useful improvement in the new Sprout100 is a teeny-tiny LED status indicator displaying whether the power and/or bass boost is on or off, etc. 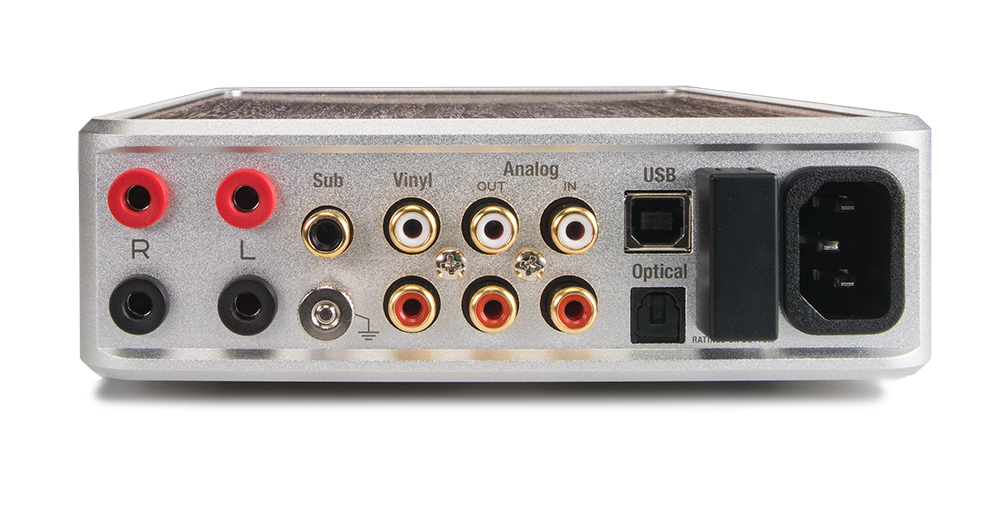 As befits PS Audio’s high-end audio ethos, this sleek and stylish little package also contains about as full-featured an integrated amp as you could wish for. There’s a newly redesigned phonostage (moving-magnet only, fixed gain and loading), a swanky new DAC (an ESS Sabre 9016 that decodes 128DSD and 384/24 PCM), and Bluetooth 2.0. Other new features in the Sprout100 include an optical input, a variable mono subwoofer output, and “bleeding-edge” ICEpower amplifier technology. Indeed, as I’ll soon describe, the Sprout100 delivers a much bigger, bolder sound than its name and size would suggest. It’s quite portable as well, and international travelers/markets may appreciate the universal AC voltage input, which handles anything from 100–240VAC 50/60Hz. The Sprout100 also ships with a 6-foot power cable, four gold banana speaker connectors, a headphone jack adapter, and an owner’s reference manual with clearly detailed and helpful instructions geared toward newbies and more seasoned audiophiles alike.

Conveniently, my review of this small-footprint integrated coincided with my recent move into a new space, so I was able to enjoy music more immediately through a fine yet simple system that was quicker and easier to set up than my current reference gear. The Sprout100 served as a capable core in front of single-driver Air Tight Bonsai loudspeakers connected via AudioQuest Venom cables with my iPhone 8 Plus via Bluetooth as a “quick-and-dirty” source, playing back mostly Tidal tracks, or my MacBook Air using Roon. In my previous abode, I’d set up the original Sprout in the same configuration, and during my critical listening I swapped the old unit in for more direct comparison with the updated model. Right from the get-go, dramatic differences between the old and the new jumped out at me: heartier low-end (particularly with bass boost on), wider dispersion with more openness and sense of depth, lower noise floor, and higher resolution.

Firing it up on some funky tunes, I was immediately struck by the Sprout100’s bigger, better bass. Exhibit A: The heavy, deeply funky grooves and bass lines of Nina Simone’s “Funkier Than a Mosquito’s Tweeter” from the remastered Miss Simone: The Hits were reproduced with satisfying substance. Leopoldo Fleming’s congas conveyed convincingly quick, crisp snap on attacks; other percussion layers from tambourine to kickdrum were also cleanly rendered with body and texture. Obviously with one-way speakers, one can’t expect outsized images and cavernous soundstaging but the Bonsai’s powerful single-driver coherence and openness carried the day.

Speaking of bass, the Sprout’s bass boost option comes as the default setting, and, depending on the source material, it often became my default. Although the term “bass boost” might suggest more “bottom-up” sonics, its effect was more subtle, not obvious or overblown; it seemed to provide a slightly more substantial foundation, like the stiffer underpinnings of a garment, keeping the low end, uh, tighter. Generally it enhanced the kinds of music you’d expect it to: dance, electronica, rock, etc.—music that tends to be heavier on bass. It did fewer or less apparent favors with detailed acoustic music, and more intimate and closely miked recordings, such as jazz combos, but neither did it detract from them.

When the function was defeated (by simply holding down the power knob for a few seconds), resolution might have been heightened a smidge, but the presentation sometimes skewed slightly leaner. Again, the effects were usually subtle. On Holly Cole’s “Jersey Girl” from Temptation, the tambourine’s timbre was less pleasing and convincing with a little sizzle on cymbals with the bass boost off. A bit of brightness and sibilance crept in on some vocals, too.

The Sprout’s sonic signature resides mostly in neutral territory—especially for a Class D design—but occasionally delivers just a gentle touch of warmth. There was a hint of dryness, too, on certain instruments—cello, for one, but maybe this relates to the combination of the Sprout and the Bonsai’s doped paper cone (or other system factors). Honestly, this little integrated’s sonic shortcomings were few and hard to find fault with, and it certainly defied expectations in this price category (and at times beyond). The degree of detail, dispersion, and naturalism was striking, particularly on well-recorded material. Cat Power’s “Stay” compelled me to lean in and listen closer: You could hear the piano pedals release gently, her diction captured closely, powerful presence, delicate vocal harmonies, and long decays at the end of notes. On “Walk It Back” from The National’s Sleep Well Beast subtle yet clearly distinguishable breaths were audible between Matt Berninger’s baritone vocal lines, adding to the track’s undercurrent of tension and urgency.

As in the original Sprout, the Sprout100’s headphone amplifier was a standout. (An aside: While listening with headphones, I discovered that to turn the bass boost on or off you must unplug the cans first, as the function is tied to the speaker output; the volume level also goes back to a lower preset.) I listened with two pairs of headphones: Sonus faber Pryma with dynamic drivers, and the more upper-tier and harder-to-drive HiFiMan Edition X planar-magnetics, which the amp was more than up to the task of driving, albeit at higher volume levels. Full of pep and bounce, Boris Blank’s “Electrified” amazed, or should I say, electrified me with rapid-fire attacks from a quiet background. I gave in to the urge to crank it up, and the Sprout didn’t flinch. It kept on packing punch and exciting energy with solidity. Layers and effects I’d never heard before jumped out from both channels.

As a vinyl lover, I appreciated the built-in phonostage, though I’d suspect that the Sprout100 would more likely be primarily employed for digital purposes. I still had on hand the excellent MoFi Electronics UltraDeck turntable I’d recently reviewed (Issue 284)—and would highly recommend—fitted with MoFi’s UltraTracker cartridge, a moving magnet that outputs 3.5mV, a figure on the low side of the Sprout’s recommended input (though still within the user manual’s specified range). Compared with the degree of dynamism and detail heard on other modes of playback, the results on phono were polite and even-handed, more laid-back than slamming. Images’ edges were more softly focused. On cuts from the Mobile Fidelity reissue of Pixies Doolittle, “Silver” and “Gouge Away,” I was still nodding my head in time to the beat, backgrounds were quiet, but the presentation felt slightly sluggish, the sonic equivalent of having jet lag—present but not fully alive and awake. Some of this could have been attributed to the lower output of the cartridge, but this was still an entirely respectable and listenable presentation. Post-move system limitations aside, the inclusion of this phonostage is welcome and commendable—and the circuit is bound to perform better with a more ideal moving-magnet cartridge pairing (i.e., one closer to Sprout’s preferred specs). However, when I played those same cuts back on Tidal using Roon on a MacBook Air (running macOS High Sierra 10.13.6) via USB connection, higher resolution returned, as did greater impact, texture, and presence. Attacks, such as the drumkit thwacks on “Gouge Away,” were elevated a notch, as if they’d had a double-shot of espresso or a swift kick in the rear.

Conclusion
In some ways, the original (and now the 100 version) Sprout could be viewed as a harbinger in its category, predating both the recent upswing in integrated amplifier releases, and the ongoing trend of simplifying componentry and systems while increasing flexibility of functions. What’s more, this full-service integrated also shines in broader crossover appeal. For music lovers just getting started in the hobby—or who just want better sound—the Sprout100 offers quite an affordable, approachable core component. For other audiophiles it could anchor a secondary system in, say, a bedroom or office (headphone amp!).

With the release of its next-generation Sprout100, PS Audio has succeeded in making the tired terms “new and improved” actually mean something by addressing many real-world audio needs. There are upgraded features outside and updated technologies inside. Sonically, you get more headroom, heft, and body, plus greater substance and resolution. Revisiting my review of the original Sprout, I can say that my conclusion still rings true: “The Sprout offers plenty of quality without complication. Just connect the little guy and use the knobs on the front. For simplicity, versatility, portability, and affordability, it’s tough to beat. You get a helluva lot for your money. It’s hard to imagine a more fun, cool component.” With the Sprout100, expect big sound and even bigger bang for the buck.