In an era of streaming network-attached digital music sources you might think the time for listening to music as played from spinning silver discs is past, but that isn’t necessarily the case. In fact, if you have read between the lines of commentary from many of our reviewers you might have noticed a quiet trend; namely, a softly spoken preference for the sound quality of music played from discs as compared to the sound of the same music played from network-connected players or servers. It’s hard to say what accounts for this preference, but one explanation may be that top-shelf disc players are able to harvest audio data from discs with very few read errors (and thus minimal intrusion from error detection and correction algorithms) and can likewise present that data in as jitter-free a manner as possible. If that’s the case, then high-quality disc players may still enjoy a worthwhile performance edge vis-à-vis typical streaming solutions, meaning our prized disc collections might in turn have a new lease on life.

Naturally, the DirectStream Memory Player plays CDs, but it also happily handles many other disk types including HDCDs, SACDs, DVD-Audio discs, HRx discs, Blu-ray audio discs, and even user-created CD-R/RW, DVD±R/RW, DVD±R DL, and BD-R/RE discs. In addition to discs, the Memory Player can also play files directly from USB thumb drives via a convenient front panel-mounted USB port. To achieve this level of versatility, the DirectStream Memory Player is based on the time-tested Oppo universal disc player transport, but it is important to understand that it is not merely a re-badged or restyled Oppo. On the contrary, the Memory Player adds distinctive output features that distinguish it from the Oppo and most other transports on the market. 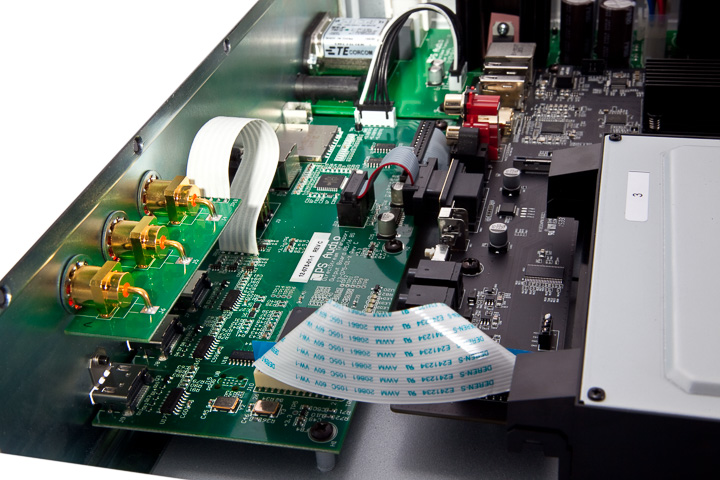 Perhaps more importantly, the DirectStream Memory Player is – unsurprisingly – a ‘memory’ player; rather than outputting data read directly from discs it instead outputs data from a very low-jitter buffer system that PS Audio calls a “Digital Lens”. However, the “Digital Lens” architecture used in the Direct Stream Memory Player is different to and better than the lens system found in the earlier Perfect Wave Transport. The old lens, says PS Audio, “relied on an intelligent RAM buffer to isolate digital data from the mechanical optical drive and laser mechanism” to output data “through a fixed low jitter clock to the DAC”. The new lens architecture “solves timing, noise, and isolation problems through a unique combination of buffer memory and FPGA-based digital processing” with the upshot that the new Memory Player “has been able to shorten the memory requirements and improve the timing of digital audio data”. In practical terms the DirectStream Memory Player moves from disc reading to ready-for-playback status faster than the original Perfect Wave Transport did and it sounds noticeably more sure-footed into the bargain.

One major benefit of the DirectStream Memory Player is that it can output DSD data from SACDs directly through its 12S outputs, provided they are connected either to PS Audio’s DirectStream DAC or DirectStream Junior DAC (both DACs can accept DSD data through their 12S or USB inputs). No other player we know of offers this sort of DSD data transfer option, which is a boon for those who own (or might wish to own) large collections of SACDs.

For my tests I used the DirectStream Memory Player in my reference system, which includes a recently updated DirectStream DAC, an AURALiC ARIES wireless bridge with 2TB music library drive, and a variety of loudspeakers, including the GoldenEar Triton References, Totem Signature One monitors, and Dynaudio Special Forty monitors. This system allowed back-and-forth comparisons between the sounds of streamed content (from the ARIES) vs. the sounds of the same content played from discs. The results proved eye opening.

Let me begin by saying that sonic presentations of the ARIES and DirectStream Memory Player were competitive with one another and similar enough in broad strokes that casual listeners might have declared them to ‘sound the same’. But more careful and critical listening reveals that in fact the two sources don’t sound the same, with the DirectStream Memory offering a number of individually small and subtle but cumulatively significant and worthwhile sonic benefits. Let me expand on this point.

First, I found the Memory Player offered consistently superior low-frequency pitch definition and clarity. For example, when I listened closely to the pitch-bending tympani statements heard in the third (Adagio) movement of Bartók’s Music for Strings, Percussion and Celesta [Reiner/Chicago, RCA Living Stereo, SACD], I found the Memory Player capture the attack, sustain, pitch shifts, and decay of the drums with greater clarity and more textural detail (such as the ‘skins sounds’ of the drum heads), significantly enhancing the overall sense of realism.

Second, the Memory Player enjoyed a notable edge in terms of capturing transient sounds of all kinds, such as the sounds of Chris Thile’s delicately but precisely plucked mandolin notes as heard on ‘Speak’ from Nickelcreek’s This Side [Sugarhill, SACD]. In particular, the Memory Player unlocked the mandolin’s at once incisive but also sweet-tempered voice in a highly believable way. I observed similar benefits when listening to the Joe Wilder – Marshal Royal Quintet’s rendition of ‘Mood Indigo’ from Mostly Ellington [BluePort Jazz/NuForce Media, DVD – 96/24]. On the expressive horn solos in ‘Mood Indigo’ the Memory Player let me hear small transient sounds such as the soft click of saxophone valves opening or closing, or tiny shifts in embouchure, that—in subtle ways—made the track feel much more vivid and alive (and less like mere ‘hi-fi’). 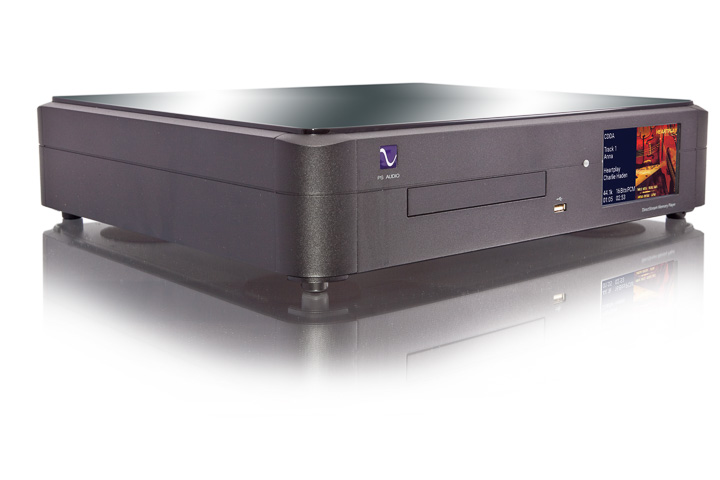 Third, the Memory Player did a better job of delivering both harmonic and reverberant information in the music, as in the percussion track ‘Stank’ from Jamey Haddad, Lenny White, and Mark Sherman’s Explorations in Space and Time [Chesky, 16/44.1]. Small, filigreed details and harmonics from percussion instruments large and small were rendered with greater delicacy and a suave, self-assured sense of ‘feel’. What is more, instrument harmonics remained wonderfully consistent with their underlying fundamentals, rather than being presented in a clinical, disembodied manner. Finally, the Memory Player let me hear small, low-level echoes and reverberant details that helped place the trio within a large and naturally reverberant recording space. This ability to render not only the musical performance but also the context in which it unfolds is one of the Memory Player’s greatest strengths.

You might infer from the comments above that the Memory Player is all about harvesting and presenting more musical information, which it does well, but the Memory Player can also have the effect of smoothing and—in a subtle way—enriching presentations that can might otherwise sound bit edgy or raw. A good example would be the wonderful Hadden Sayers’ track ‘Back to the Blues’ as performed by Ruthie Foster and Hadden Sayers on Foster’s Live At Antone’s [Blue Corn Music, 48/24]. When heard in a streamed context, Foster and Sayers’ voices can sound somewhat rough-edged and raw, while Sayers’ Fender Stratocaster can sometimes exude an overly ragged and almost ‘zingy’ quality. But, when the album DVD is played through the Memory Player Foster and Sayers’ voices smooth out noticeably and sound richer, while the sound of the Stratocaster reverts back to its usual, soulful sonic character.

Finally, the Memory Player helps unlock the emotion in good recordings in ways that streaming sources can’t always duplicate. A fine example would be Steve Strauss’ ‘Dead Man’s Handle’ from Strauss’ Just Like Love [Stockfisch, SACD]. Günther Pauler of Pauler Acoustics produced this album and one of his techniques is to apply, selectively, varying degrees of echo and reverb to give extra emphasis to certain lines of phrases. Streaming sources can capture these details to a certain extent, but not with the laser-sharp focus and precision that the Memory Player affords. One such reverb-soaked line is Strauss crooning, “Lord, take me home/to my baby”, where the Memory Player lets you hear and feel the comingled weariness, longing, and desire in the singer’s voice. For just that moment, Strauss’ voice seems to expand, surrounding the listener, and filling the entire room. It is just this sort of musical moment that makes the Memory Player seem so worthwhile.

During my time with the DirectStream Memory Player I found it to be about 99.9% reliable, although it did exhibit a few command and control glitches when playing one or two DVD-Audio discs (e.g., Buena Vista Social Club [Nonesuch], where the Player had problems identifying track boundaries). Even so, the remote let me quickly sort our workarounds so that the disc could be played. However, with CDs, HDCDs, SACDs, DVDs, Blu-ray audio discs, and HRx discs the Player proved utterly trouble-free.

If you’ve bought into streaming source components in a big way, you may find PS Audio’s DirectStream Memory Player will force you—in the nicest, gentlest, and most rewarding way—to reconsider the sonic merits of disc-based music playback. Streaming sources can be very, very good, but in many cases and in many ways, the DirectStream Memory Player often proves to be that extra ‘Nth degree’ better, in the process helping music to sound more vivid, emotionally rich, and alive.