February 7th and 8th found me visiting the showrooms of GTT Audio & Video, in Long Valley, NJ, for a private audition of the new Audionet Humboldt integrated amplifier. Though I had attended the official Humboldt launch in Munich last May, this would prove to be my first serious audition.

Like the other Scientist Series Audionet products, Humboldt takes its name from a prominent man of science, in this case eighteenth and nineteenth century Prussian polymath, geographer, naturalist, explorer, and influential proponent of Romantic philosophy and science, Friedrich Wilhelm Heinrich Alexander von Humboldt.

Conceived on the same platform as the Stern linestage and using the same unique floating panel design for optimal resistance against microphonic effects as well as temperature stability, the $55,000 Humboldt offers a stereo output of 320Wpc into 8Ω, or 460Wpc into 4Ω, with a frequency response of 0–700,000Hz (-3dB), DC, or 3–700,000 Hz (-3dB), AC. The A-weighted signal-to-noise ratio is given as greater than 120 dB, with a channel separation greater than 140 dB, from 20–20,000Hz.

The Humboldt offers three pairs of single-ended rhodium-plated Furutech RCAs, and two pairs of balanced, gold-plated Neutrik XLR inputs, as well as one pair each single-ended rhodium-plated Furutech RCAs and gold-plated Neutrik XLR outputs. The high-resolution display on its front panel shows user-defined names for each input, as well as a readout for the power supply monitor and menus for adjusting individual input levels. For more information, see the Audionet Website (http://en.audionet.de/machines/humboldt/). 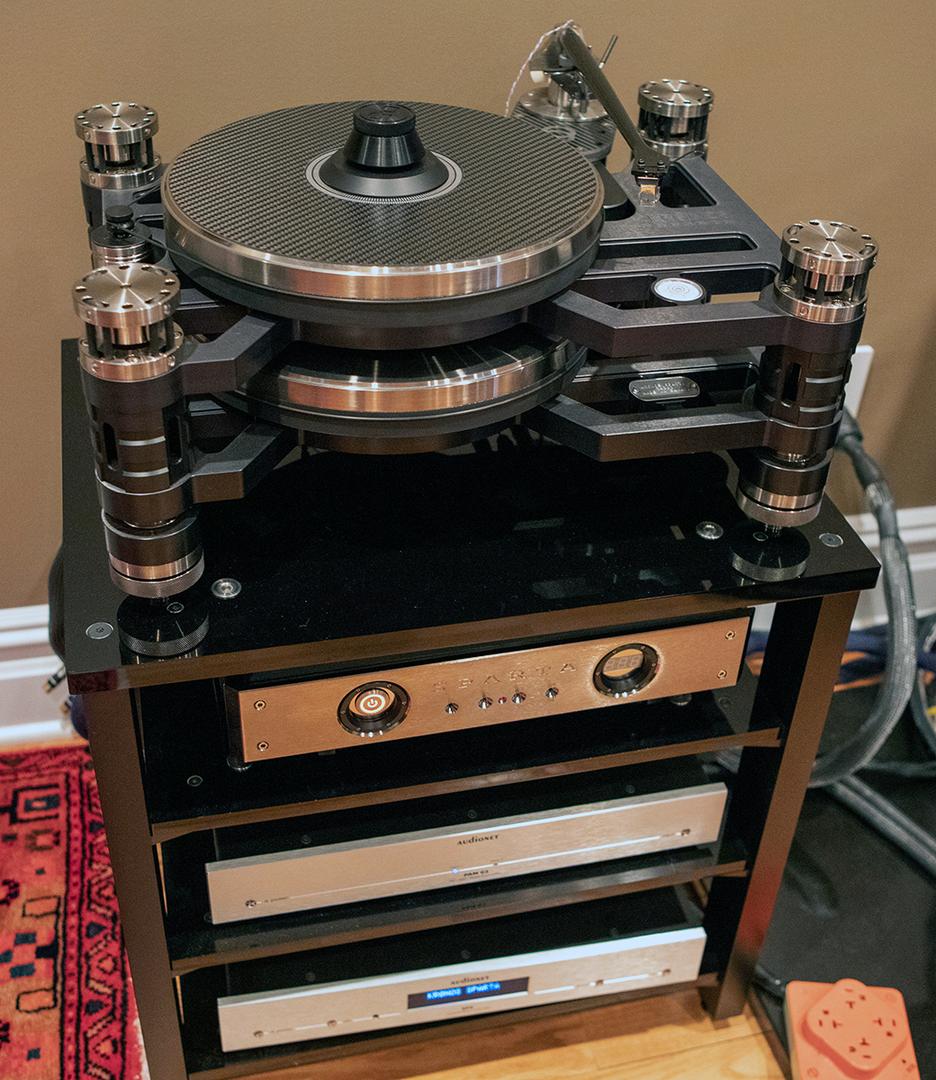 Because I had brought nearly two dozen of my own LPs for this audition, our source was exclusively the Kronos Sparta with Black Beauty Arm, Carbon arm board and optional SSCPS ($45,875), fitted with the MY Sonic Labs Signature Platinum MC cartridge ($11,000), feeding the Audionet PAM G2 remote-controllable phonostage with the EPC Power Supply ($16,800). Speakers were the YG Acoustics Hailey 2.2 ($46,800), and all cabling was Kubala Sosna Elation Series interconnects and speaker cables ($7000 for the first meter, $1500 per each additional meter), and power cords, ($2000 for the first meter, $500 per each additional meter.)

It should come as no surprise that I was captivated by its exemplary level of performance almost from the first note. Humboldt shares many design features with the Audionet flagship Stern linestage and Heisenberg monoblocks, notwithstanding the essential compromises needed to pack all this finesse and authority into this not-so-tiny but still single chassis.

With LPs like Beethoven’s Piano Sonata No. 23 in F Minor, Op. 57 “Appassionata” (45rpm RCA RDC-4), David Bowie’s Cat People (Putting Out Fire), a 45rpm 12-inch single (MCA MCAT 770), or Rickie Lee Jones’ 10 inch EP Girl at Her Volcano (Warner Bros. 9 23805-1 B), all remarkably dynamic in their own way, Humboldt proved to be frighteningly good. The Beethoven “Appassionata” features Ikuyo Kamiya putting a Bösendorfer Imperial Concert Grand piano through its paces, alternating from a mere whisper to full-on thunder, and is nearly an impossible test of dynamic capabilities, both micro and macro. While this track has been known to distress many excellent playback systems, the Humboldt showed no hint of compression, minimization, or slurring of musical scaling, even at near-concert-hall playback levels.

On the Tchaikovsky Spectacular with André Previn leading the London Symphony Orchestra (Mobile Fidelity MFSL 1-502), the speed and resolution exhibited when recreating leading transients with strings, piano, horns, or percussion was blistering. And notably, while it clearly served the propulsive energy and body of this music, the Humboldt also reveled in delivering the music’s overall organic warmth and texture, rendering tone color vividly and truthfully.

Overall, deeply extended bass on up through the midbass and power range was recreated with virtual effortlessness and remarkable speed, resolution, and definition, matched by a good sensation of weight and impact.

Midrange performance bordered on sublimely magical, with an intoxicating combination of instrumental body and bloom with timbral and textural accuracy that can only be described as wholly organic. Its ability to portray the individual brilliance and sheen of instruments, like those from my original 1971 Island release (ILPS9154) of Cat Stevens’ Teaser and the Firecat, the recent Mobile Fidelity reissue of Dire Straits’ Communique (MFSL 2-467), or the aforementioned Girl at Her Volcano, was breathtaking. 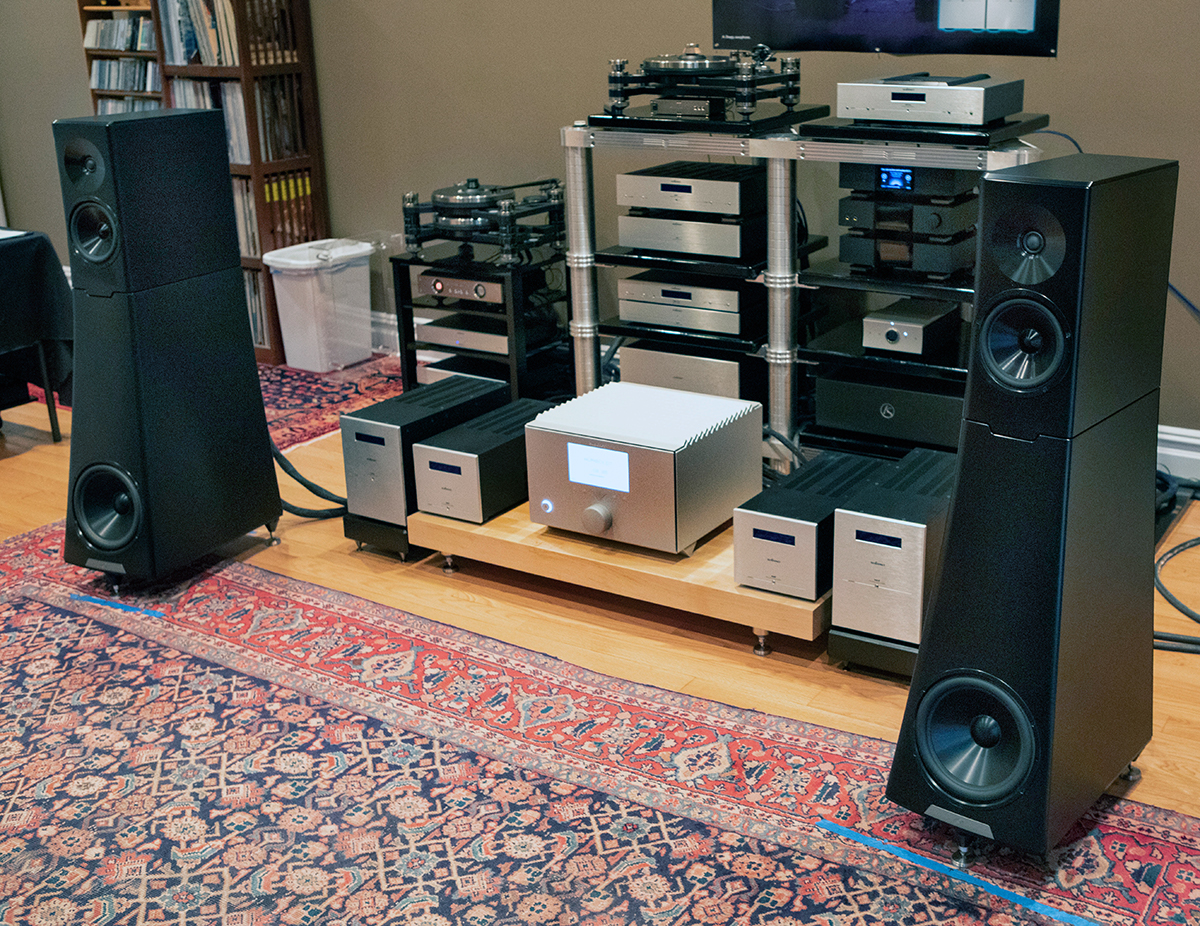 Uppermost octaves flow with an effortless sense of air, space, and delicacy that is remarkably authentic, most effectively demonstrated by instruments like cymbals, triangles, and chimes. With the proper recordings, you are treated to remarkably extended decay, yet with clarity, texture, and extraordinary tonal fidelity.

When it comes to soundstaging and imaging, Humboldt is truly world-class. Not only was the stage compellingly wide, deep, and most notably, of proper height, but image sizes were completely realistic, with solid and stable locations, and a get-up-and-walk-around-in dimensionality. This was demonstrated consistently, with every genre I played, from classical, to classic rock, to the blues.

From the lowest register to its uppermost extensions, the Humboldt displays a remarkably consistent, unwavering tonal balance, which, when combined with its exacting speed and dynamic prowess, yields one of the most credible senses of tempo, pace, and drive imaginable.

The Audionet Humboldt is one utterly enchanting machine. My notes for this audition repeatedly mentioned two sonic attributes more frequently than all others…tone and texture. Its ability to render low-level textural, transient, and timbral details in such a complete and holistic manner allow the Humboldt to let any music it recreates flow with heightened nuance and immediacy. As a result, voices are at once more natural sounding, purer, and more expressive, bringing you that much closer to the artists intended message.

While it is clearly not the equal of the Stern/Heisenberg separates, it did make a compelling and engaging showing, readily asserting its Audionet heritage. Yet, to be honest, I don’t believe the YG Acoustics Hailey 2.2’s allowed the Humboldt to deliver everything it has to offer. I think it was held back to some degree, and I wouldn’t hesitate to pair this Audionet integrated with speakers selling for as much as what it retails for or more—it is that good!

What the Humboldt revealed to me over some 10 hours of listening was its innovative combination of clarity with expressiveness, focus with body, resolution with bloom, delicacy with power, and especially of detail with texture, leaving no question that this is one of the most serious integrated amplifiers available today, one that conspicuously bears the distinctive DNA of its larger, more expensive separate brethren.