I wanted to give a quick preview of the goings-on at Rocky Mountain Audio Fest 2014. Official show reports will hit the site soon, but this will be a short list of some things that I’m excited about and are of interest to us audiophiles.

There are a lot of really great things happening in high-end audio, and some really great rooms at RMAF 2014. Probably the biggest and most exciting thing to happen at RMAF 2014 was the launch of TIDAL, the U.S. version of WiMP, which is the CD-quality music streaming service that Europeans have been enjoying for some time. TIDAL has over 25 million songs (and adds thousands more every day), is compatible with many high-end brands’ proprietary tablet/smartphone apps, can be used with any Android or iOS app, and is only $19.95 per month.

TIDAL has the potential to radically revolutionize the way we listen and access music. Streaming services are nothing new, and if you read my feature article on the personal audio revolution in our 2015 Buyer’s Guide issue 247, you will see that I’m a big fan of streaming services, especially Spotify. While Spotify is an amazing tool to discover and access music, it is limited by low-res 320kbps audio. TIDAL will offer CD-quality streaming at its launch, and word on the street is that we will see 96kHz/24-bit streaming in late 2015. This is huge.

While RMAF 2014 was TIDAL’s “launch,” the service is still a few weeks away before it’s ready for the consumer market. I will receive a test subscription for TIDAL, and will thoroughly test the service, its sound quality, and its catalog to give you a better idea of whether the service is worth it.

I’m going out on a limb here, but I think it will definitely be worth every penny. I had the opportunity to see TIDAL in action in the PSB/NAD/Bluesound room at RMAF 2014, which was streamed via the BluOS app on an iPad. I’ve been using Spotify via the BluOS app with the Bluesound products I reviewed in our Buyer’s Guide issue—which I liked so much that I purchased them—and the results are amazing. Even though the integration with Spotify isn’t perfect, and is a little clunky at times, I can stream music to my entire house and control everything from my iPad. If TIDAL can offer the same ease of use that Spotify does, then it’s a winner in my book. 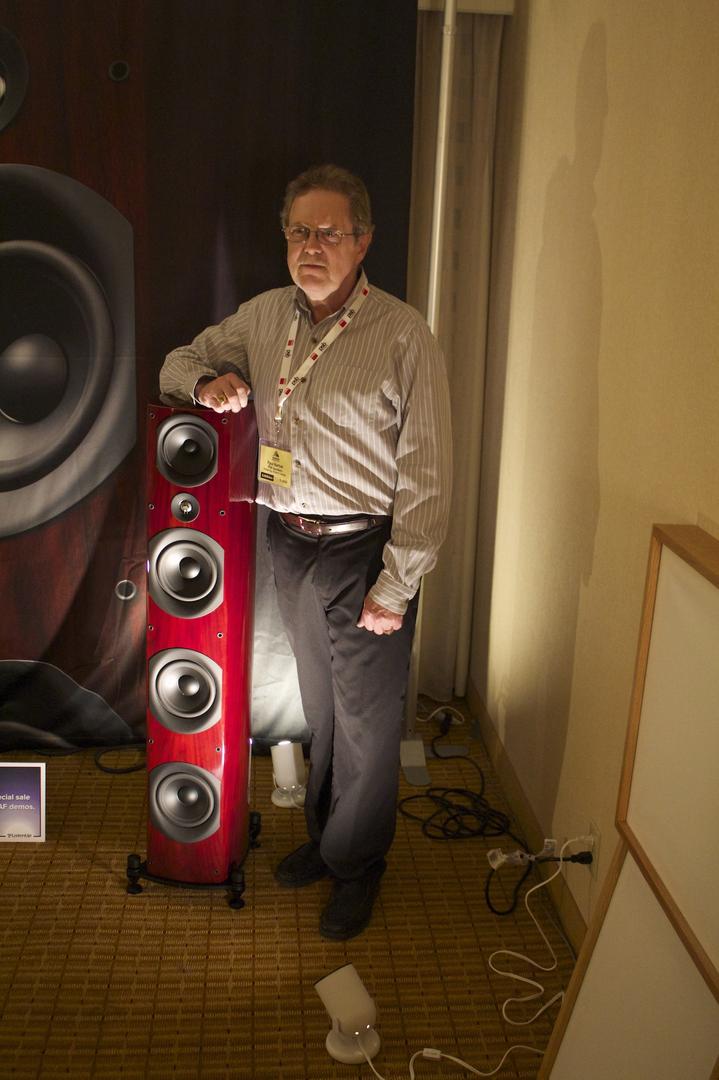 Paul Barton, founder of PSB, gave me a short demo with the new Imagine T3 floorstander ($7500) driven by NAD electronics, and TIDAL was the source material. While “CD-quality streaming” didn’t actually match the CD-quality of a good transport spinning an actual disc, it was 85-90% there. The TIDAL team forewarned that the service was still in Beta and that the kinks were being worked out, but sound quality was a large improvement over Spotify and other streaming services. When the service is 100% operational, I will report back with a more in-depth analysis. As of now, I will still be using Spotify to discover new music. Because the service is only $9.99 per month, it’s still my #1 recommendation. Yes, it’s not CD-quality, but at least you can stream music for a month or two while TIDAL is brought up to speed.

The other big thing that I’m excited about is actually a pretty small thing, the Sprout integrated amplifier ($799) from Scott McGowan. If the name looks familiar, that’s because he’s Paul McGowan’s son, the founder of PS Audio. The sprout has digital inputs, including Bluetooth, phono input, and a very healthy 50W class D power output. While the Sprout is diminutive in size, it doesn’t lack in substance. There were some technical hiccups while listening to the main PS Audio system during an after-hours jam session, so Scott, his wife, my significant other, and I moved over to the Sprout room—which featured a Sony reel-to-reel, GoldenEar Aon 3, and PS Audio cabling—and I was blown away by how good the system sounded, a system that cost less than $2k. 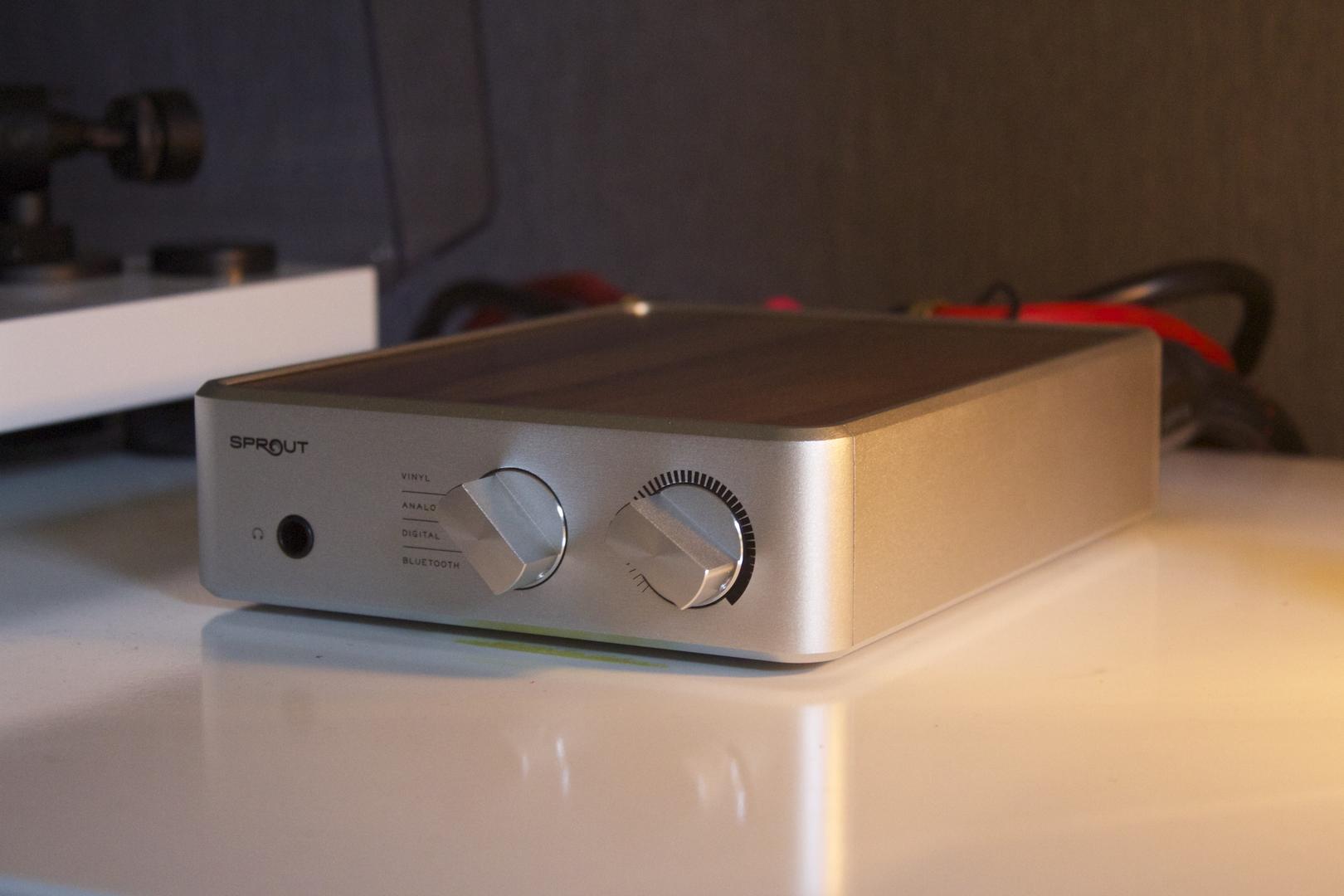 I have a review sample of the Sprout at my house and have been using it for a month or so with various speakers, and it really is a killer product. Scott is a really passionate young designer, which is a pretty scarce thing in this industry these days, and when speaking with him it was obvious that he designed Sprout to strike a chord with not only veteran audiophiles, but with the younger generations as well. At $799, the Sprout is an attainable high-end product for most everyone, and is an amazing segue into the world of high-end audio or a great device for a second system. If you have a reference system, the Sprout might not provide you with what you need, but it isn’t something to be dismissed. Then again, while the flagship PS Audio system had some issues with the classic Infinity IRS speakers in the room, the Sprout was up and running without a glitch. There’s something to that: A high-end system that works, sounds good, and makes you want to dance without loads of tweaking and adjustment. 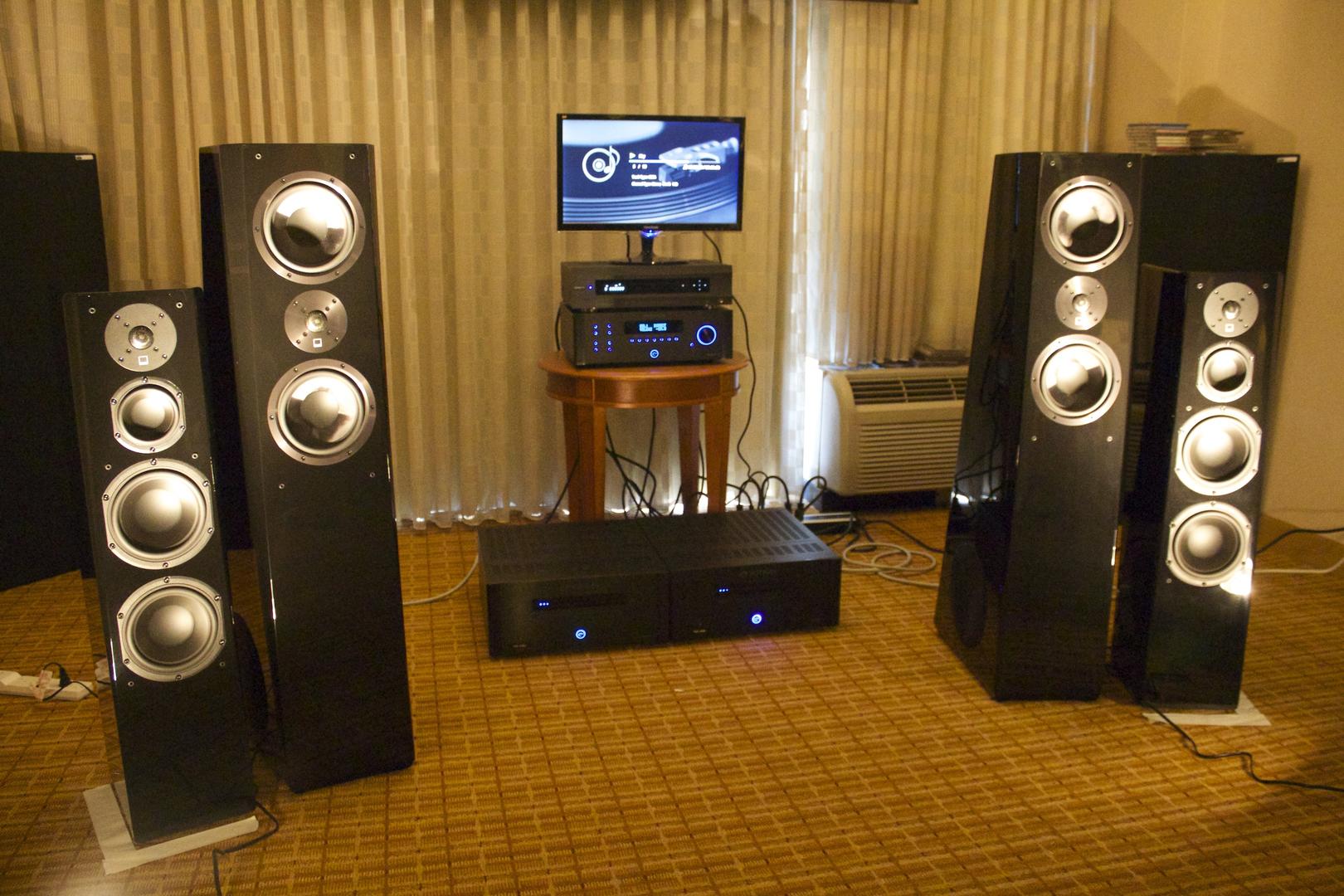 The last thing I’d like to mention before the official reports come out are two speakers from SVS Sound, better known for their subwoofers than anything. SVS was demonstrating two new speakers, the Prime Tower floorstanders ($1k) and Ultra Tower floorstanders ($2k). When SVS asked me to visit their room for a demonstration, I will admit that I wasn’t expecting much. I mean this in the nicest way, too. When you listen to $100k systems all day, it’s difficult to be really excited about $1k speakers. But let me tell you, these speakers, when listening in nearfield, are some of the best I’ve heard in the budget speaker category. I liked the Ultra Tower a lot better because of the tighter and deeper low-end extension, but even the smaller Prime Tower sounded good. If you have a small room or small apartment, but want the low-end extension that floorstanders provide, the Prime and Ultra Tower speakers should be a serious contender for your next purchase. svsound.com

Keep an eye out for more reports coming your way.