The Swedish-built I35 Prisma integrated amplifier, the latest model in Primare’s highly regarded 30 Series, exemplifies a new breed of integrated amp. Where once upon a time the integrated existed in a world apart from separates, and then only as a humble, low-cost, space-saving component, the last few years have seen a rise in high-powered, full-featured, upmarket contenders brimming with connectivity and outfitted with premium internals. Much of this uptick can be credited to the introduction of high-resolution onboard DACs. But streaming services and storage options have also elevated the integrated amp to even greater heights as a complete one-box solution. So much so, that many enthusiasts might start asking, “Separates? Who needs ’em?” It’s a question that kept occurring to me as I’ve evaluated the new generation of integrateds.

Outwardly, the I35 is pure Primare, a pristine appearance that has remained unsullied over the years. The thick, brushed-aluminum faceplate sports a wide rectangular OLED display and a quartet of small buttons that include power, menu, and configuration. The display is flanked on the left and right by pleasingly tactile selector and volume knobs.

In spite of the front panel’s minimalism, the I35 is teeming with connectivity: Wi-Fi and Ethernet for network-based storage, Bluetooth, AirPlay (for Apple devices), Spotify Connect, and more. Perhaps most importantly, the I35 is equipped with Chromecast (a streaming portal à la Apple TV) that when connected via a Wi-Fi network (or Ethernet) can “cast” a galaxy of music-streaming services to the Prisma and, when operated from the Google Home app (a free download), will connect with a panoply of Google home/multi-room devices. (For Old School users dedicated to conventional sources, such as CD players, the I35 is available in an analog-only version sans DAC and network connectivity.) 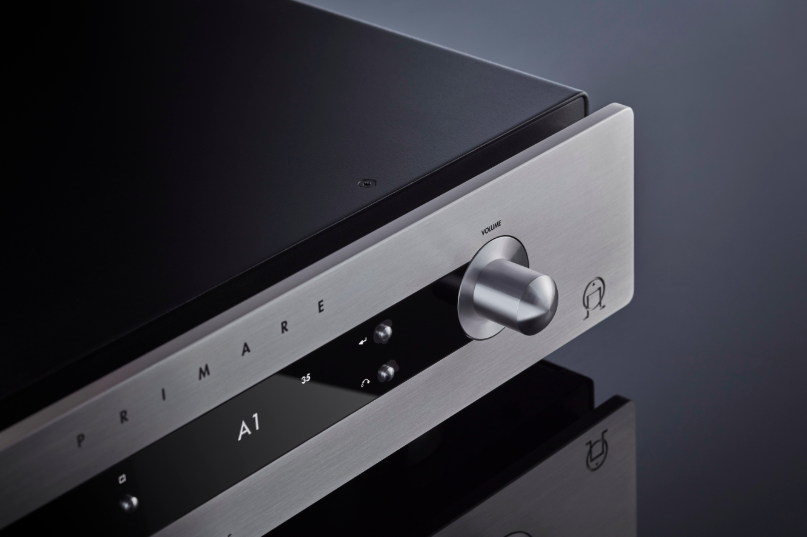 The relatively crowded real estate of the back panel speaks to the wide-ranging inputs that the I35 offers. The top row of digital inputs includes four optical, a pair of coaxial plus USB-B for a computer (PC or Mac), and a coaxial digital output. Sturdy footers isolate the chassis from vibration. Network LAN connections and a USB-A slot reside between the dual antenna taps. The bottom row is dedicated to analog inputs, including a pair of balanced XLR and three unbalanced RCA, a pre-out, and a line-level out. The speaker terminals are on the lower left beside the IEC plug and on/off rocker switch. Irksome, however, is the placement of the speaker terminals which are positioned so low on the panel that it is difficult to affix commonly used spade connectors and larger cables. Prospective owners might consider banana plugs instead.

The amp section of the I35 is the first to use Primare’s proprietary UFPD 2 power-module technology, powered by a switching power supply. Primare’s literature states that the new circuit improves on earlier generations with “immediate and sustained high power output with very low distortion, lower noise and extended headroom, instantaneous rise time, and absolutely linear amplification across the entire bandwidth… over an ultra-wide frequency range.”

My review sample included the DAC stage—an AKM AK4497EQ 32-bit stereo DAC capable of supporting up to 768kHz PCM and 22.4MHz DSD. Noteworthy is that this DAC “integrates a newly developed switched-capacitor filter ‘OSR Doubler’ that greatly reduces sound degradation from noise shaping, achieving a flat noise floor up to 200kHz.” Further, the USB-B input allows playback of files up to PCM 768kHz/32-bit and DSD256/11.2MHz.

Given the sophistication of today’s streamer amps, organization is key. For the I35 that responsibility is mostly handled by the Prisma app—a free download onto a smart device such as an iPad or comparable Android tablet. I connected an Ethernet cable to my router, and in the time it takes to say “Swedish meatballs” I was off to the races. With my NAS drive automatically configured, I was effortlessly streaming content from Spotify, Tidal, and TunedIn within the Chromecast folder. Fortunately, the configurable world of the I35 keys well off the Prisma app. The graphical interface is nicely sorted out for selecting input sources and streaming services; it’s stable and, after brief experience, intuitive to navigate. It controls volume, renames source inputs, and even adjusts input gain per source with a swipe or the touch of a virtual button. More than likely you will end up putting the traditional remote control in a drawer. But don’t lose it—it comes in handy when your teenager makes off with the iPad.

A couple of minor quibbles: The characters of the OLED display are perfectly legible up close, but so tiny that you’ll need a pair of binoculars to read them from more than a few feet away. The front-panel menu interface on the I35 needs updating, and users are much better off getting cozy with the comprehensive Prisma app. Finally, Chromecast worked well (the more Google Home stuff the better) but, on occasion, toggling between the Prisma app and a streaming service like Tidal caused the audio output to default to the iPad’s internal speakers. It took only a moment to reselect the I35 output, but this was a reminder of the complexity of these systems.

In sonics, the I35 walked the straight and narrow musically with solid, pitch-precise behavior in the bass, a full midrange, and a treble that didn’t etch or irritate. I would characterize the I35 as being on the slightly cooler side of the tonal spectrum, but not by a wide margin. Vocalists of all stripes exhibited a lively, natural sound; from Tom Waits’ craggy baritone to the sassy, songbird soprano of Linda Ronstadt, voices were reproduced with sensitivity to sibilance and low-level intimacy. Singers were not rendered as cutouts, either. They had the physical presence of being within the soundspace—Waits’ voice suggesting deep chest resonance, Ronstadt’s a mix of high-altitude extension and gutsy brio. Although some treble dryness crept in during violinist Anne-Sophie Mutter’s performance of the Tchaikovsky Violin Concerto, the I35 maintained the violin’s intensity, tempered with overtones of harmonic sweetness on top. During solo piano passages it convincingly generated the necessary soundboard fullness and harmonic resolution that I associate with a concert grand—the most difficult instrument in the orchestra to reproduce in full. Bass response was nicely extended, alive with a level of timbre and texture that made it easy to separate a rock kickdrum and an electric bass guitar playing in sync, four beats to the measure. Or the pitch and sustain from the cascading kettle drums during Copland’s Fanfare. 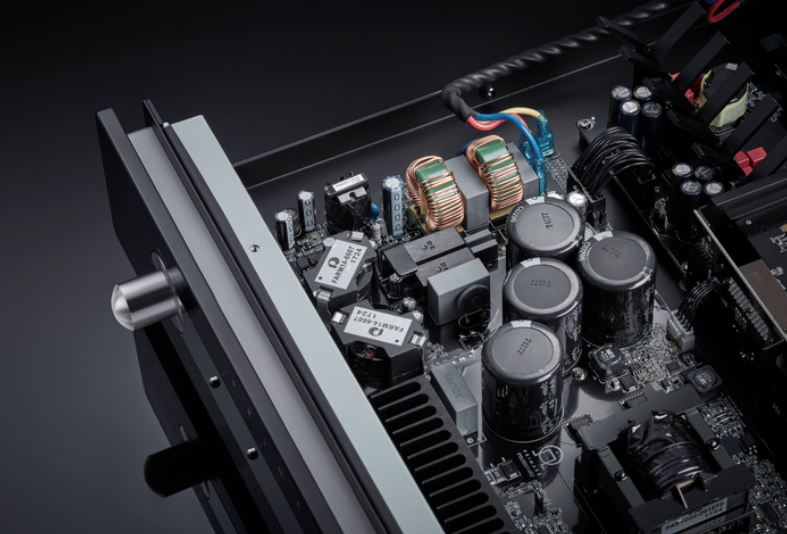 Transient behavior was swift and clean. Picking up the leading edge of a tambourine rattle, a trumpet blast, or even the fingernails of a classical guitarist was part of the enjoyment of living with the I35—not because it drew attention to itself but rather because of the ease with which transient information was being integrated into the larger performance. Its cooler balance was sometimes revealed during brass passages, but I think this was due more to a hint less bloom than to aggressive tonality.

Class D power, often mischaracterized as digital amplification, was once the elephant in the room as regards sonic quality. Many were quick to point out its deficiencies while not fully appreciating its strengths and its potential. Typical gripes were the airless top end, lack of dimensionality, and an extended but overly controlled bass region bereft of timbral detail. I found this seldom to be the case with the I35, as it largely ameliorated the clichés that dogged early Class D. In fact, the I35 easily upstaged the Primare I20, the excellent 70Wpc integrated I reviewed way back in Issue 143—a Class AB design.

Imaging was very good, sufficiently precise without sounding unnaturally clamped in a vise. Soundstaging and dimensionality were good, but not as immersive as I would have liked. Although there were glimmers of front-to-back depth reproduction—especially during orchestral passages—I felt the I35 could improve slightly on providing the full expanse of players layered from the edges of the stage to the furthest upstage recesses.

On the macro-dynamic level, the I35 was explosive and superbly controlled. However, by a small margin I felt the gradations of micro-dynamic energy that I’m accustomed to hearing when listening to a large chorale or smaller collection of voices were less than fully resolved. A track like “After the Gold Rush” is a good example. The song, which features a three-part harmony sung by Emmylou Harris, Dolly Parton, and Linda Ronstadt, is from their Trio album and it’s a wonderful track in the way it reveals the finely-honed efforts of these artists. In this instance, the I35 closes in on but doesn’t entirely express the low-level vocal interplay of these iconic singers and the soundspace surrounding them. In fairness this was a subtle subtraction and a conclusion I only arrived at when I swapped out the I35’s on-board DAC for my reference Lumin S1 media player. In the great scheme of things, I’d call it a minor deduction. A little perspective: Compared with some personal (and pricey) faves in this segment the I35 can’t quite muster the pop or Wagnerian bass response of the MBL C51, the dynamic fireworks of the Pass Labs INT-250, or the earthy mid and top-end romanticism of the Aesthetix Mimas. However even in the midst of this elite company, and at a fraction of the price, the I35 puts in a top-notch, nicely balanced performance.

Never have integrated amps been asked to do so much musically and functionally. But any way you want to listen, the I35 Prisma is at your beck and call. Maybe you only want to stream from Tidal or one of the other services. Or play back music from a computer or network storage. Maybe you’ll never spin a CD or an LP, or even own a recording in any physical format. The I35 is non-denominational. But like a virtual butler, it’s poised at the ready should you change your mind. In sum, Primare’s latest is a rock-solid performer excelling in a highly competitive bracket. It met or exceeded all my expectations.