As the name implies, the all-tube EVO 400 represents an evolutionary upgrade from the DiaLogue Premium preamp and one that the PrimaLuna team is particularly proud of. Probably the most significant (and obvious) new feature is balanced connectivity, implemented using mu-metal-shielded quadfilar line transformers to provide two stereo XLR inputs and one output. I should hasten to add that the audio gain circuitry is still single-ended from input to output. And if you don’t need balanced connections, there’s the less expensive single-ended EVO 300. Cost margins have been kept tight so that, as Upscale Audio’s Kevin Deal puts it, you don’t have to be some rich dotcom dude to be able to afford world-class performance.

Further enhancements include power supply upgrades, including an improved tube filament supply for reduced hum. Six expensive tin-foil capacitors sourced from a Swiss factory that typically only supplies the likes of NASA and Boeing are used in critical coupling locations. Swiss-made silver-plated OFC wiring is used in the signal path along with Japanese custom-built Takman resistors, which are known for their musicality. Instead of an input-selector switch, sealed relays mounted at the rear of the chassis (adjacent to the input jacks) are used for switching sources. This results in a secure low-noise connection. A soft-start circuit allows tube filaments to reach operating temperature before applying high voltage. Folks, this is truly a high-end preamp in terms of design, parts-quality, and execution.

I don’t think that Kevin Deal would forgive me if I failed to mention the AC Offset Killer, a feature common to the EVO line, which eliminates DC offset at the AC mains input and is effective in eliminating potential mechanical transformer hum. The chassis layout is dual mono, even when it comes to power supplies. This translates to two large toroidal power transformers potted in mu-metal shields and two separate tube rectifier and filter circuits with huge chokes. The only deviation from dual mono is the volume control, a stereo motorized Alps Blue Velvet conductive-plastic potentiometer. Sonically, this is a superior volume control that in previous listening tests had eclipsed IC-based digital controls. But since both channels are adjusted in tandem, there is no provision for channel balance. 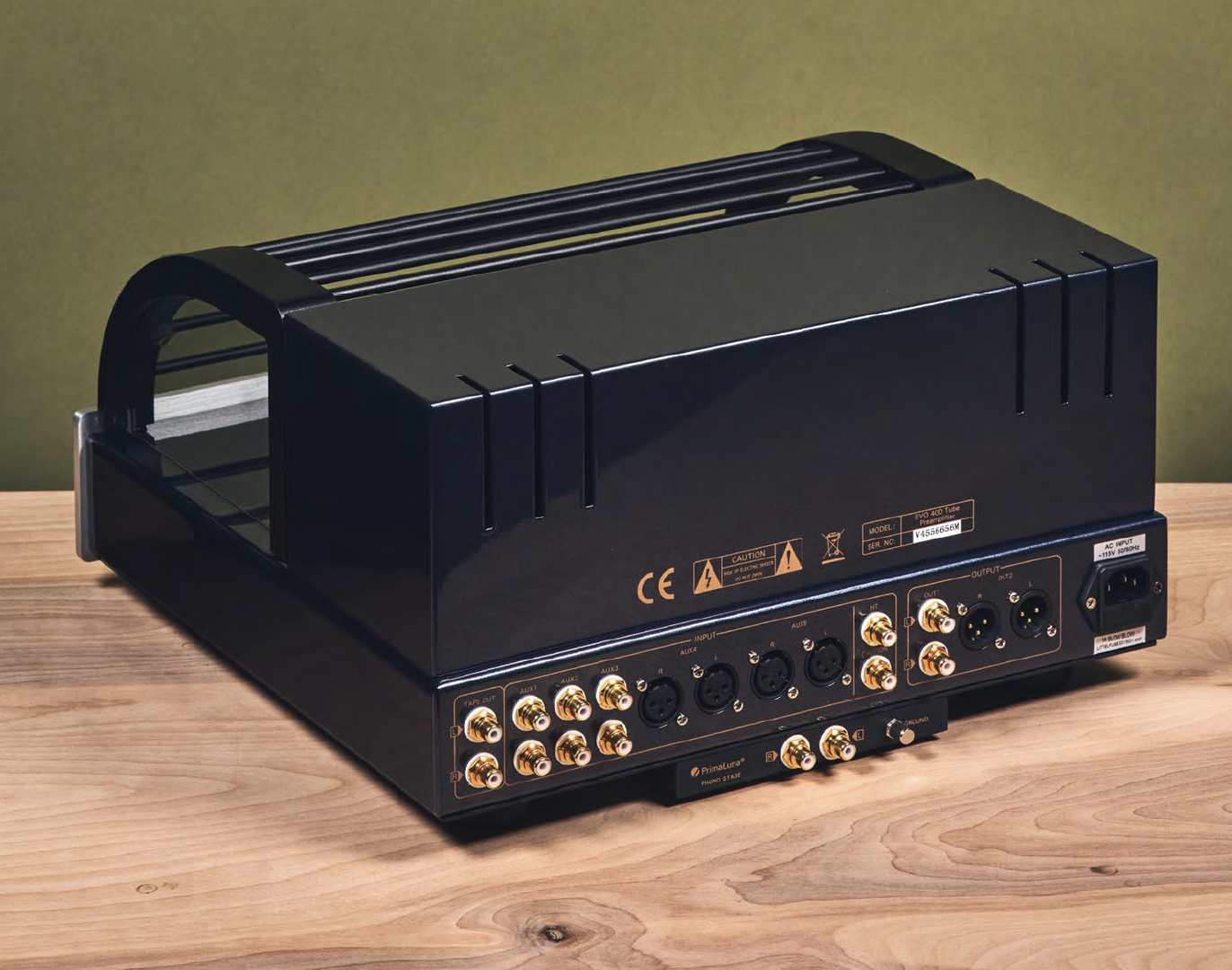 One of the EVO400’s surprising aspects is its weight. Just try lifting it up and prepare to grunt. Despite a modest footprint, this thing is a beast at about 53 pounds! I guess the two massive toroidal power transformers are to blame. The preamp weighs more than many 60W tube power amps, and I’m hard pressed at the moment to think of another line preamp that exceeds the EVO400 in the weight category. Being overweight is not a bad thing when it comes to power supplies and is further proof of PrimaLuna’s commitment to excellence.

Despite the presence of three 12AU7 dual triodes per channel, the overall voltage gain is surprisingly only 10dB (about a factor of four). Of course, that’s by design, and Marcel Croese, former chief engineer at Goldmund, knows exactly what he’s doing. Less gain equates to less noise and tube hiss, a godsend for those of us with high-sensitivity loudspeakers. The signal-to-noise ratio is 93dB, an impressive figure for any linestage, especially for a no-global-feedback tube one.

Most digital sources generate output voltage levels of 2V to 4V, which are adequate to drive any power amp to full power. In such a scenario, a line preamp would be attenuating rather than amplifying incoming signals. In the old days, a line section was designed with much higher gain, typically over 20dB, to mate with an internal phono section. Most external phonostages today already have plenty of gain, so there’s really no good reason for a high-gain linestage in the digital age. To keep the overall gain low, the two triode sections of each 12AU7 are connected in parallel, reducing the triode count effectively from six to three per channel. Each paralleled 12AU7 has the same gain as before but with higher plate dissipation and increased transconductance. The first two triodes provide voltage gain while the third is configured as a cathode follower with low output impedance for driving long interconnect runs. Looking at the 12AU7 tube array, the input stages consists of the two middle tubes (V5 and V6), flanking them are V4 and V7 which make up the second gain stages. The outer tubes, V3 and V8, are the cathode followers. The volume control is sandwiched between the first and second gain stages. This unusual topology has been dubbed by PrimaLuna as “PerfectMatch.” In just about all preamp designs, the volume control precedes the input stage with the consequence that the input impedance varies with the setting of the volume pot. Here the input impedance remains a steady 220k ohms, irrespective of the volume setting.

In my experience, tube rectification has proven to be a prime requisite for approaching vintage tube sound. I’m very fussy about tonal weight and have found myself being disappointed in the past by solid-state-rectified tube preamps, so for me it’s discouraging to face the fact that tube-rectified preamps are rare birds these days. Thank you PrimaLuna and Lamm Industries for being true believers. Modern tube sound can best be characterized by a combination of transparency, imaging excellence, and refined detail, but the fly in the ointment is typically a lightweight lower midrange. Tonal gravitas is not easy to come by, but it became obvious pretty quickly that the EVO 400 has it in spades. To my mind, the 5AR4 tube rectifiers were at least partly responsible for the preamp’s tonal integrity, fleshing out the lower octaves and, in particular, infusing upright bass and cello with a full complement of tonal heft.

The EVO 400 did wonders for Linear Tube Audio’s ZOTL Ultralinear amp. For the record, it replaced LTA’s microZOTL reference preamplifier in the chain, which had earned my respect in terms of detail resolution and transient speed, basically as an exemplary purveyor of modern tube sound. But, as you might have guessed by now, it lacked convincing tonal weight. The EVO’s twin virtues of Goldilocks-like textural liquidity and tonal conviction saved the day, delivering a much needed infusion of textural fat and richness of tone. The really good news was that it delivered the beef without sacrificing speed and detail. Transients were negotiated with admirable speed and control. Struck cymbals shimmered with plenty of air, and massed string sound was supremely realistic. The treble range was simply sweet and detailed without gratuitous brightness or brashness to interfere with the reproduction of violin overtones or the upper registers of soprano voice. There was not much to complain about at the other frequency extreme. The bass range was reproduced with excellent pitch definition and timing, though bass control did not quite equal that of the much more expensive Lamm L2.1 Reference. Of course, ultimate bass extension would be totally dependent on the associated loudspeaker and matching power amplifier. But know that the EVO 400 can dig as deeply as your system will allow.

In the context of the Fyne Audio F501 loudspeaker, imaging could only be described as spectacular. Image outlines were almost palpable and focused within the confines of a soundstage of remarkable depth and breadth, which was totally untethered from the speakers. Stage dimensionality was a function of the recording and, in particular, took full flight on Calrec Soundfield single point-source microphone recordings. Midrange clarity was such that it allowed each recording’s ambient information to be readily discernible. Given an excellent front end, the EVO proved itself time and again not to be the weak link when it came to low-level detail or spatial resolution. Neither did it impede the program material’s dynamic prowess. Its feel for microdynamic nuances and ability to scale the macrodynamic range from soft to loud captured much of the music’s dramatic content.

My initial concern was that the stock Chinese 12AU7 tube complement might prove to be a weak link in the overall implementation based on first impressions right out of the box. By the way, all of the preamp tubes were measured on my Maximatcher MaxiPreamp II digital tube-tester for gain, transconductance, and noise. All of the stock 12AU7s were low-noise and tightly matched in terms of gain. Eventually, my initial perception of slightly grainy textures dissipated and remained just barely noticeable in the context of solid-state amplification. Lesson learned: The stock tubes take a very long time to break in. So be patient, there should be no urgency to roll-in vintage types as the stock tubes are quite good. But if you’re as curious as I was, start off with the first gain stage tubes (V4 and V5) since they appear to capture about 80% of the sonic changes. I tried both 1950s Raytheon black plate and RCA clear tops for the first gain stage and noted clear improvement in the areas of tonal color saturation and microdynamic contrasts, though I preferred the Raytheon 12AU7 due to its greater textural liquidity. I’m sure that there are many other worthwhile substitutions as there are tons of 12AU7 variants out there, and, no doubt, Kevin Deal would be happy to weigh in on this subject as well. 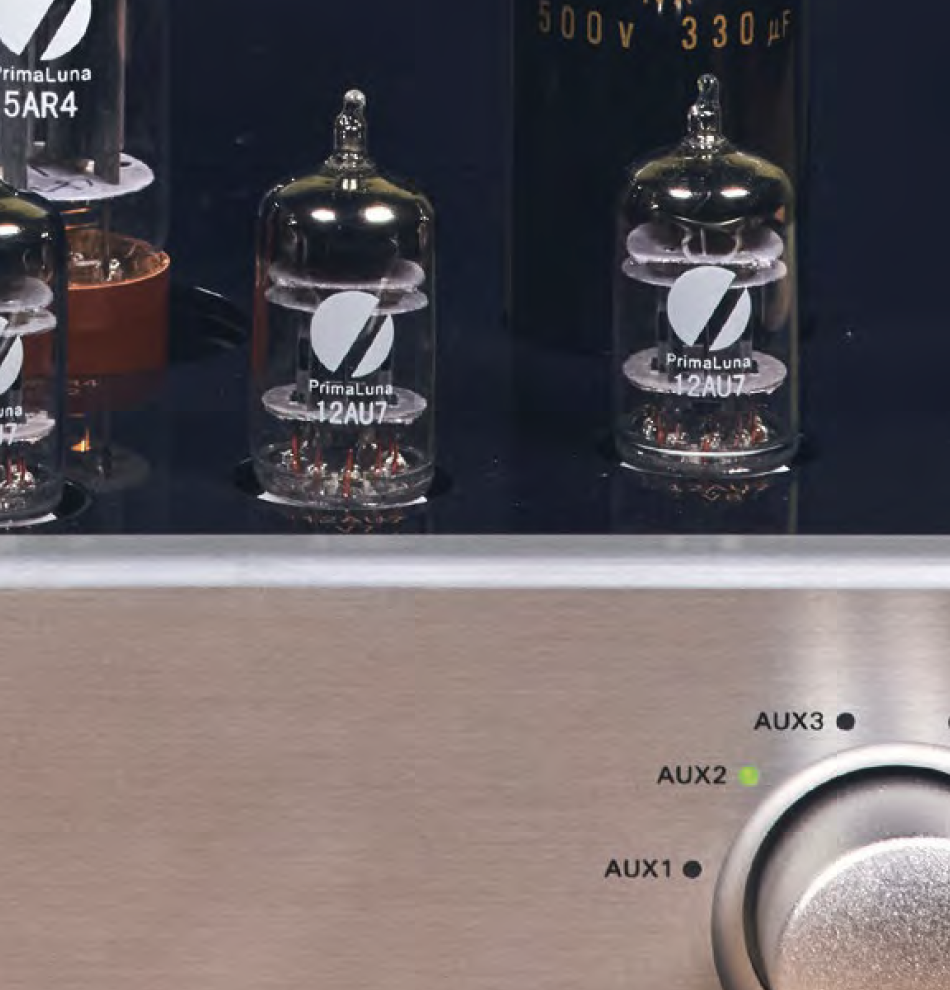 The balanced connectivity turned out to be a big deal. Driving the Wyred 4 Sound SX-1000R monoblocks, which feature switchable RCA and XLR inputs, I was hugely amazed at how much more refined the XLR connections sounded. Clarity took a big step forward, and anybody with a functioning pair of ears would have had no trouble at all telling the difference. These monoblocks are known to sound better with balanced inputs, but the sonic enhancement in this setting was larger than I had noticed previously. It would appear the output stage cathode followers are quite happy with the balanced output quadfilar transformers.

The EVO 400 is not only PrimaLuna’s best line preamp offering ever, but it also holds its own against ultra-high-end competition. It’s hard to escape the impression that it was designed from the ground up on a power amplifier chassis. It features massive and sophisticated power supplies, high-voltage regulation, exotic passive parts, and, oh yes, tube rectification via a pair of 5AR4s. Miraculously, it manages to combine the virtues of modern tube sound with the tonal heft and timbral realism afforded by vintage tube preamps. If purity of expression and tonal realism are two of your sonic priorities, get ready to embrace the EVO 400. I certainly did. In a nutshell, it’s an insane audio bargain that delivers pure tube magic.

The Changing Face of the Saxophone

The Scorching Beauty of Electric Guitars

Rok’san Roll, Baby Not long ago, the appeal of integrated […]

The Shure Corporation, founded in 1925 under the moniker “Shure […]