In Part 1 of our ‘Postcards from Las Vegas” series, Hi-Fi+ Editor Alan Sircom provides and excellent overview of the 2015 CES event. For my part of the article, however, I thought I might provide just a small series of snapshots of a tiny handful of products that caught the eyes and ears of high-end listeners in attendance at the show. My small grouping, here, should not be construed as any sort of ‘Best Of’ list, but rather as a collection of products that created no small amount of ‘buzz’ at the show.

Raidho is justly famous for its C and D-series monitors, which have garnered a reputation for offering exceptional detail, resolution, dynamic contrasts, and a wonderful quality of emotional nuance. Still, some at Raidho felt a certain something—call it the ‘fun factor’ if you will—was missing. With an eye toward recapturing this elusive fun factor, while still retaining all or nearly all of the traditional Raidho virtues, designer Michael Borresen has created the new Raidho X-3 tower-type speaker ($30,000/pair). 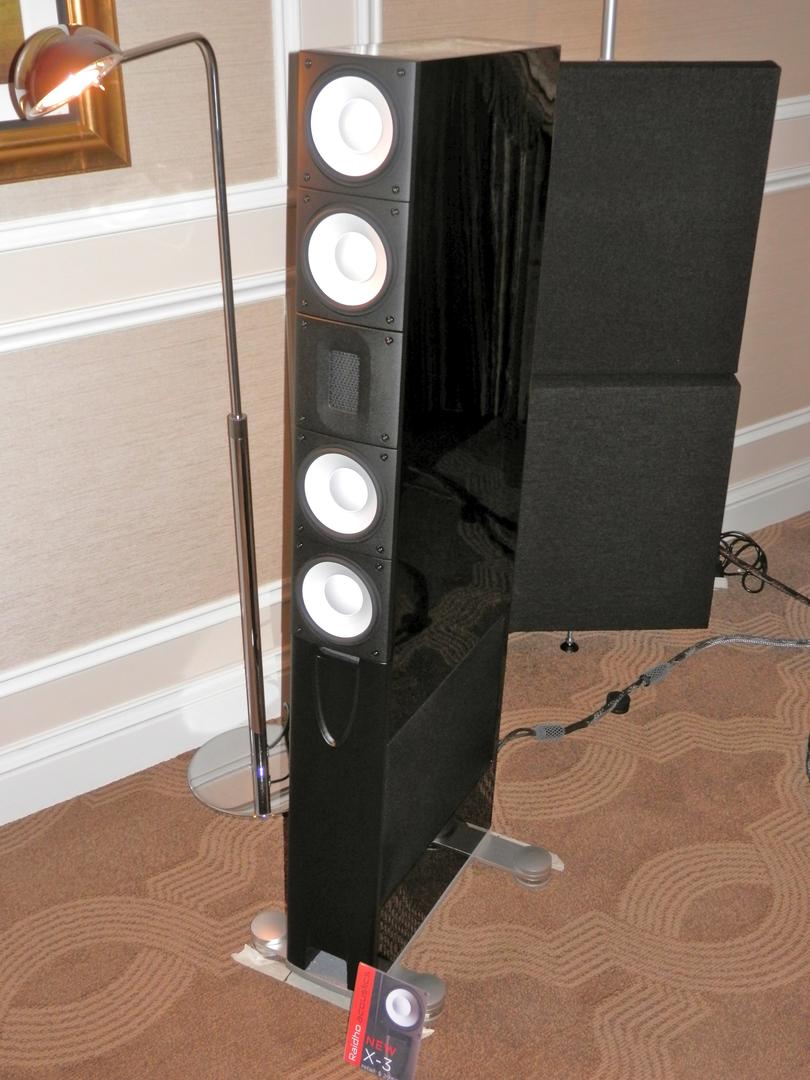 The X-3 driver array comprises a centrally positioned ribbon tweeter that is flanked by two pairs of relatively small-diameter ceramic mid-bass drivers, with a larger side-firing bass driver occupying the lower section of the X-3 cabinet. The end result is a speaker that is very, very special indeed—one that possesses most of the resolution, focus, and nuance of the flagship C and D-series models, but that offer, for its price, considerably deeper bass extension and the ability to—how shall I put this?—flat out boogie. For our point of view, this makes the X-3 the Raidho for all seasons and reasons, and who wouldn’t like that? 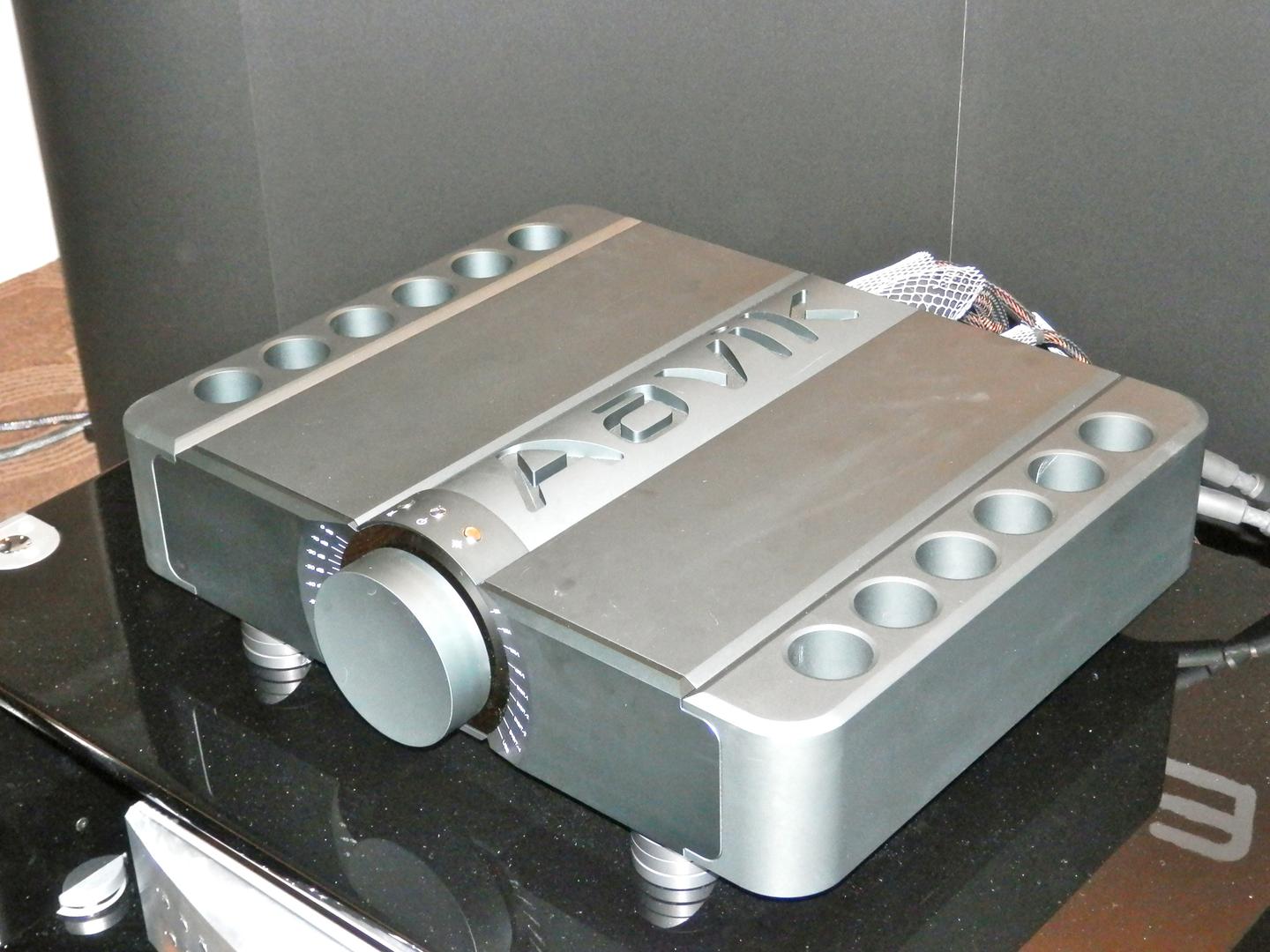 Ably abetting the X-3 in its mission is the new Aavik integrated amplifier/DAC, which offers power, subtlety, and nuance aplenty, striking an uncanny balance between the ability to dig (very) deep into recordings to capture their innermost details, while also exhibiting unfailing musicality. Our only thought is that prospective customers who already own fine electronics components are likely to demand that the Aavik DAC be sold as a separate component in its own right.

If you have ever wondered what a cost-no-object HiFiMAN headphone/amp package might be like, then the HE-1000/EF-1000 pair provides your answer. Both new components are spectacular in their own rights, but to our thinking the HE-1000 must stand as ‘first among equals’ for its ground-breaking design. 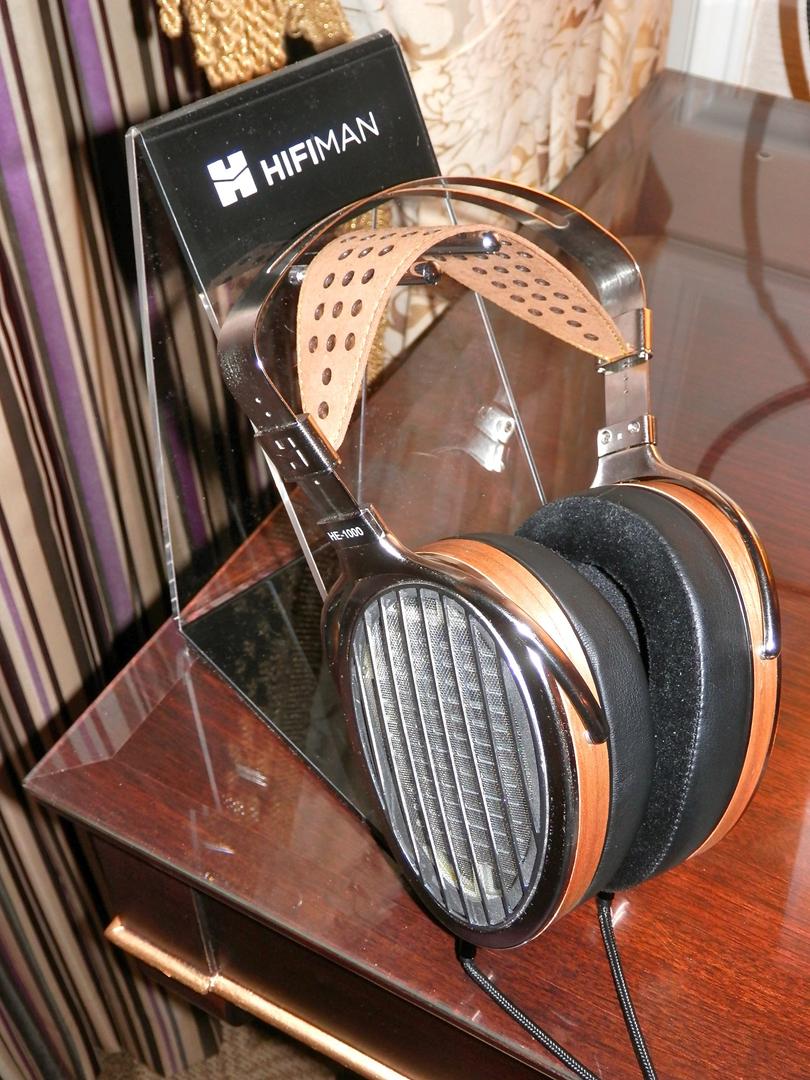 Company founder Dr. Fang Bian earned his doctorate in nano-chemistry and he brought his expertise in this field to bear in the development of the HE-1000 by creating for this headphone a true nano-material diaphragm (this in contrast to some other designs that apply nano-material coatings to much thicker diaphragm materials). The result is diaphragm that is extraordinarily light, low in mass, and incredibly responsive. Not surprisingly, then, the HE-1000 seems to offer traditional planar magnetic virtues aplenty (including powerful and nuanced bass, wide range frequency response, and vivid dynamics), plus staggering levels of resolution and detail. For the listener, the net effect is not unlike having one’s ears and brain ‘hard-wired’ to the original recording console, which affords an exceptionally intimate view of the music. 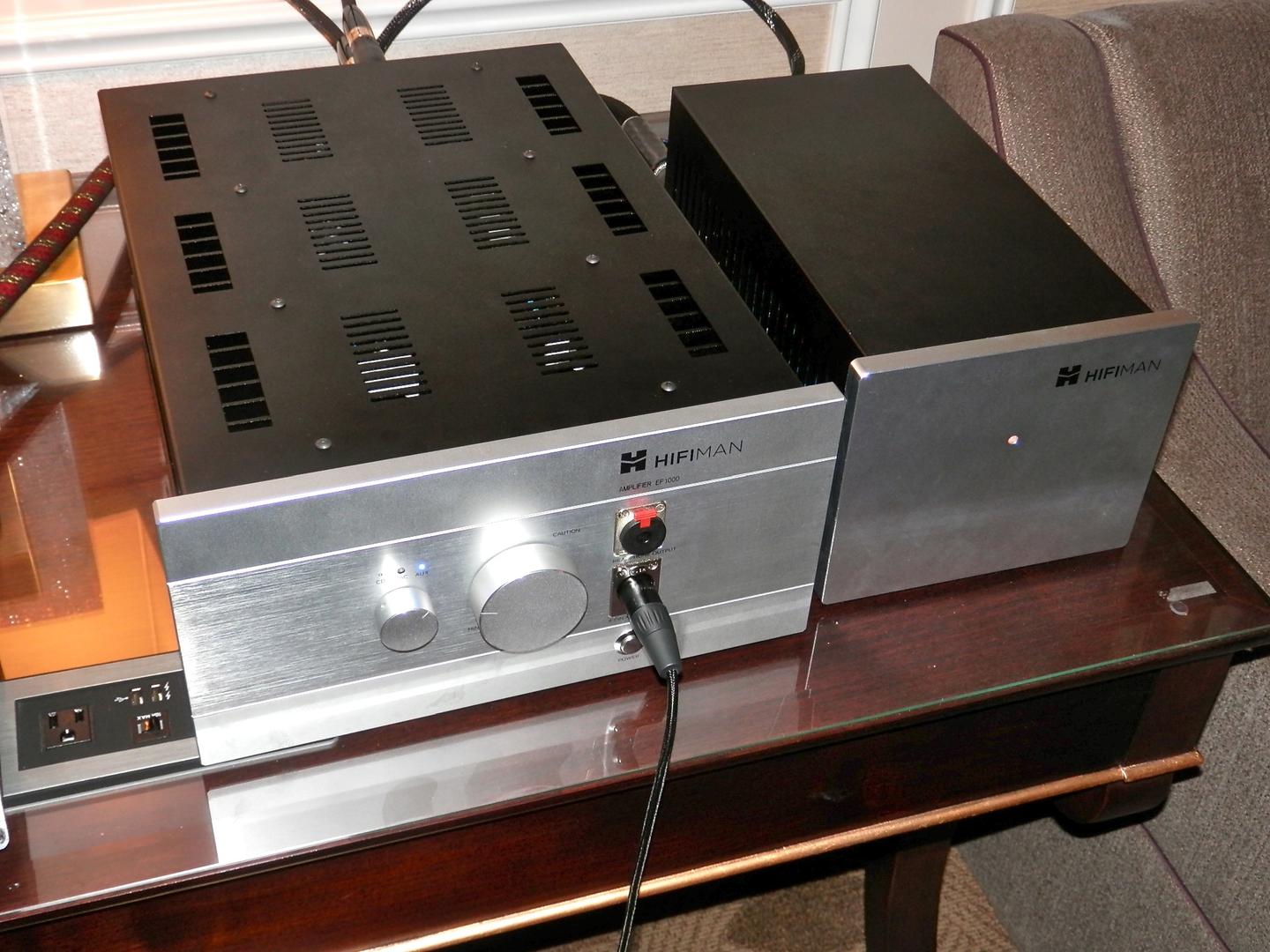 Supporting the HE-1000 is the also very impressive two-chassis EF-1000 amplifier. The amp can be used either to power headphones or full-size speaker systems, with output, in class A mode, of 50Wpc or, in class A/B mode, 150wpc. As you can imagine, the EF-1000 offers superabundant power for purposes of driving most any dynamic headphone you might care to name.

Pricing for the HE-1000 and EF-1000 has not yet been determined. Dr. Bian advises, too, that good though the HE-1000 prototypes shown at CES are, he has a few more performance tricks up his sleeve that he expects to implement before the headphones are released at some point in mid-2015. Judging by the sound of the system, we anticipate pricing to be very high (as the products are arguably worthy of premium prices).

ENIGMAcoustics is best known for its self-energised electrostatic supertweeters, but for more than a year now the firm has been working on its design for a new hybrid electrostatic/dynamic driver-equipped headphone, called the Dharma ($1,200). The Dharmas incorporate electrostatic drivers that are self-energised and thus require no outboard power supplies, unlike most other brands of the electrostats. Complementing the Dharma is the lovely Athena A1 valve-type (single-ended triode-based) headphone amplifier. 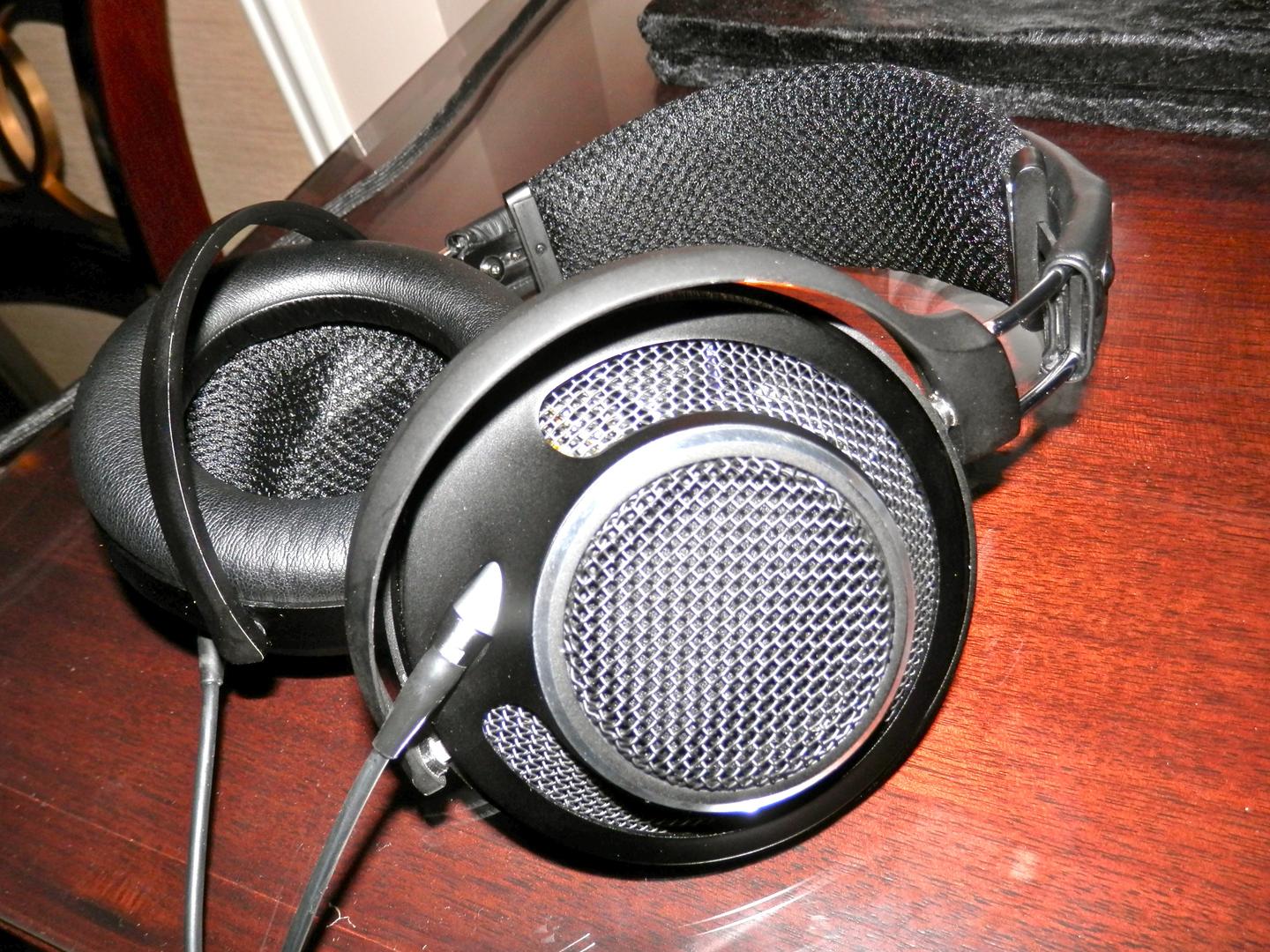 Though I had time for only a cursory introductory listen, the Dharma/Athena A1 pair well and truly blew my mind, and here’s why. This pair provided what stands out in my mind as the most spacious and compellingly three-dimensional sound I have ever heard form any headphone system to date. 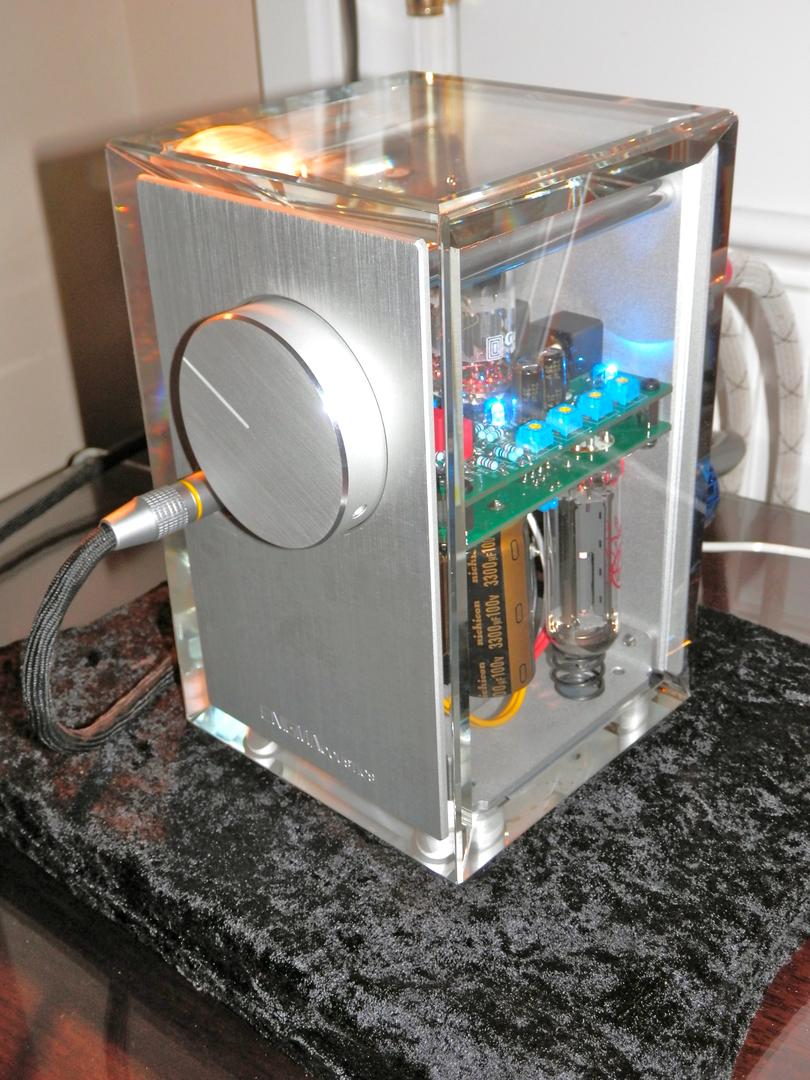 At times, the Dharma/Athena A1 created the compelling (though in my experience extremely difficult to achieve) illusion that sounds were literally emanating from far, far outside the headphone’s ear cup housings. In practice, this meant the Dharma and Athena combo yielded amazingly wide soundstages with very, very precise placement of vocalists and instrumentalists within those stages. Most impressive.

GoldenEar’s roughly $5000/pair Triton One floorstanders with active built-in subwoofers have garnered no small amount of critical acclaim throughout 2014, but for an encore the firm announced its purely passive Triton Five floorstander ($1998/pair)—the firm’s most ambitious passive loudspeaker to date. 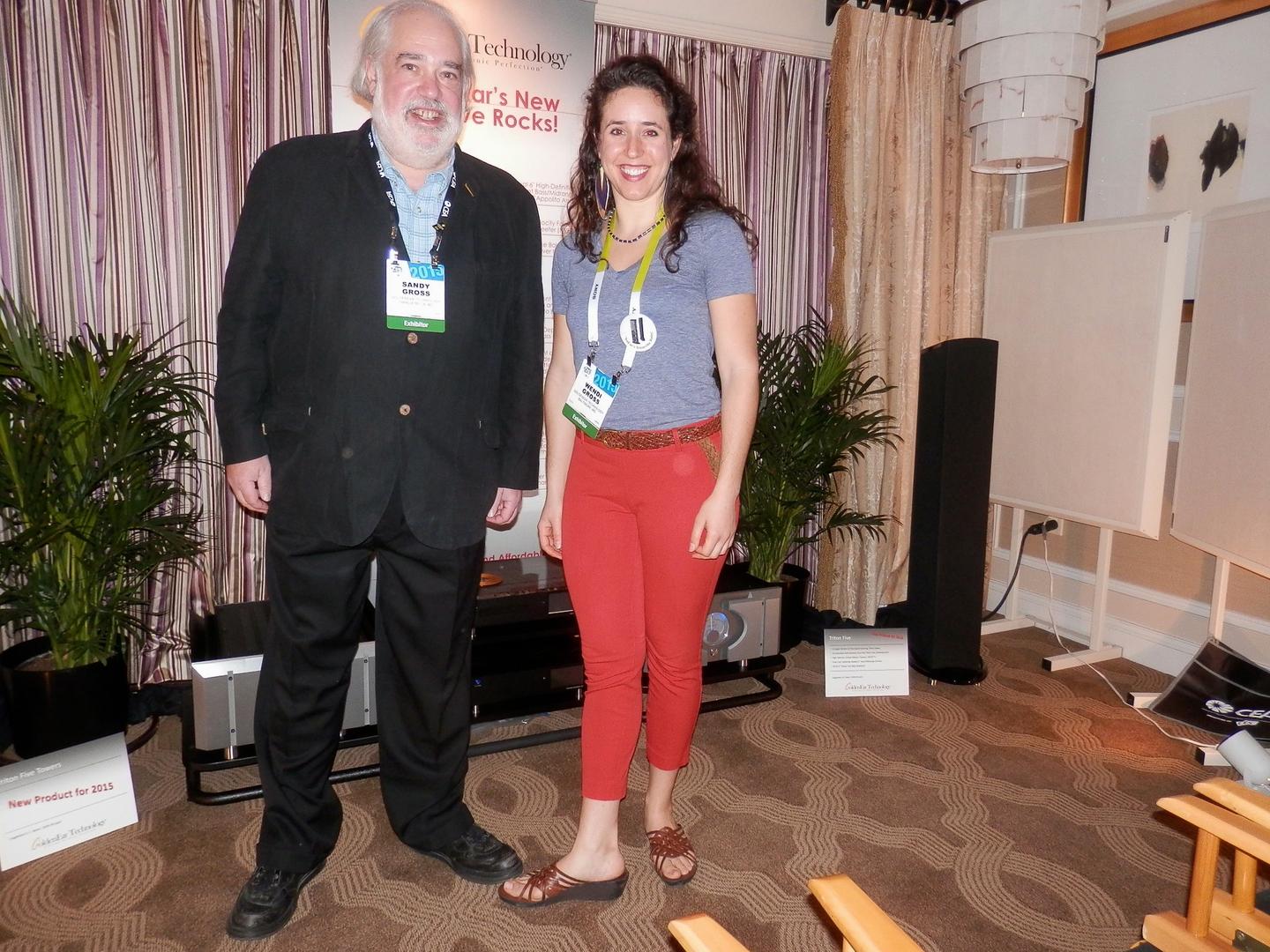 As we have by now come to expect from GoldenEar, the sonic whole of passive Triton Five is much greater than the apparent sum of its parts. How good is it? Let’s just put it this way. First time listeners who had read our and other publications’ reviews of the Triton One walked into the GoldenEar sound room and mistakenly concluded—purely on the basis of observed sound quality—that the Triton Five was surely the more than twice as expensive Triton One (itself a stunningly good value). As you can imagine, those listeners were stunned to learn they were in fact hearing the Triton Five, a loudspeaker that will sell for a tick under $2000/pair. The value for money on offer here is clear off the charts.

The US-based planar magnetic headphone maker Audeze had a very good year in 2014, with both the firm’s LCD-X and LCD-XC headphones ($1,699 and $1,799, respectively) garnering considerable acclaim from the high-end audio press. But for 2015 Audeze has moved in a new and unexpected direction to create two new, very high-performance, yet easy-to-drive and decidedly cost-reduced new planar magnetic headphones: namely, the open-back EL-8 and the EL-8 closed back models, both selling for $699 each. But do not be deceived by the accessible prices. Judged purely on the basis of sound quality, either of the EL-8 models could easily pass for mid-$1000 range units. They’re that good. 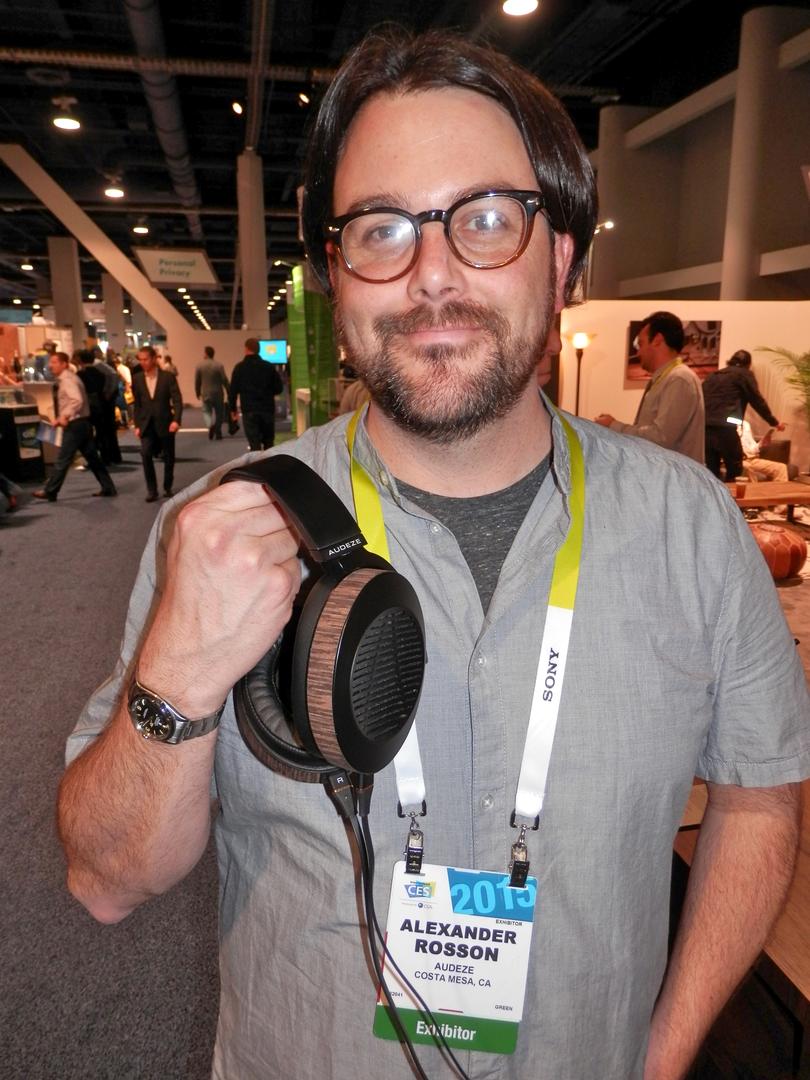 How did Audeze achieve this result? Well for industrial design assistance, Audeze turned to none other than the BMW Design Group, which helped create a fresh, distinctive, upscale, and up-to-the-minute look and feel for the new ‘phones. On the inside however, Audeze pulled out even more stops, leveraging three distinctive patent-pending technologies known as Fazor, Fluxor, and Uniforce technologies. 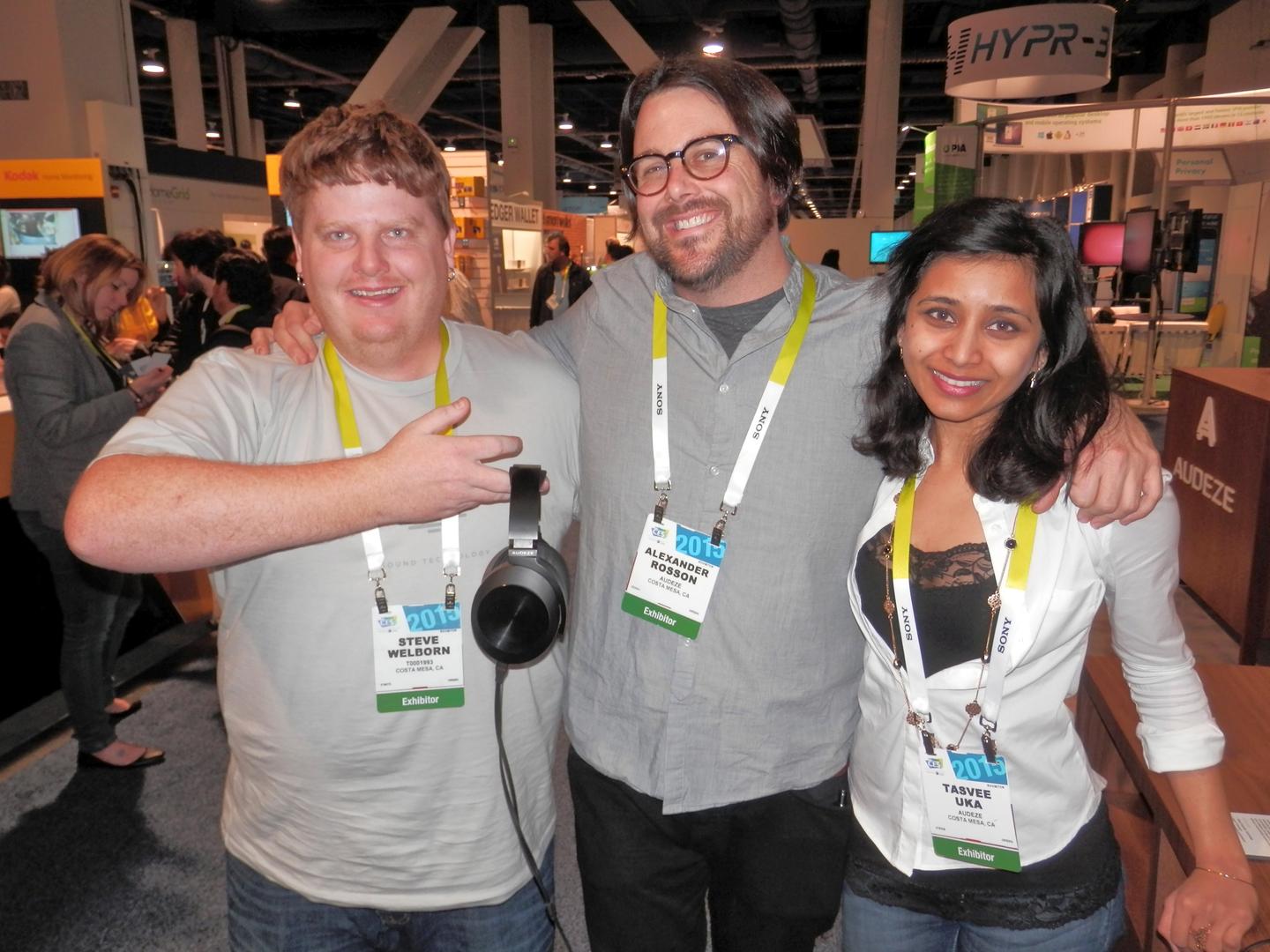 In simple terms, Fazor technologies offer a waveguide that helps smooth wave launches from the ear side of the headphone’s driver. Fluxor technology, in turn, is a proprietary magnet configuration system that focuses the lion’s share of the magnet array’s flux field toward the diaphragm side of the magnet array—thus dramatically increasing the headphone’s efficiency. The only minor catch is that Fluxor technology does tend to introduce flux field ‘hot spots’ in certain localised areas across the driver diaphragm. To address this issue, Uniforce technology is a proprietary method of widening or narrowing conductor traces on the driver diaphragm to compensate for the aforementioned flux field hot spots. As a result, the driver diaphragm experiences uniform driving for across its entire surface area. A clever solution, no? 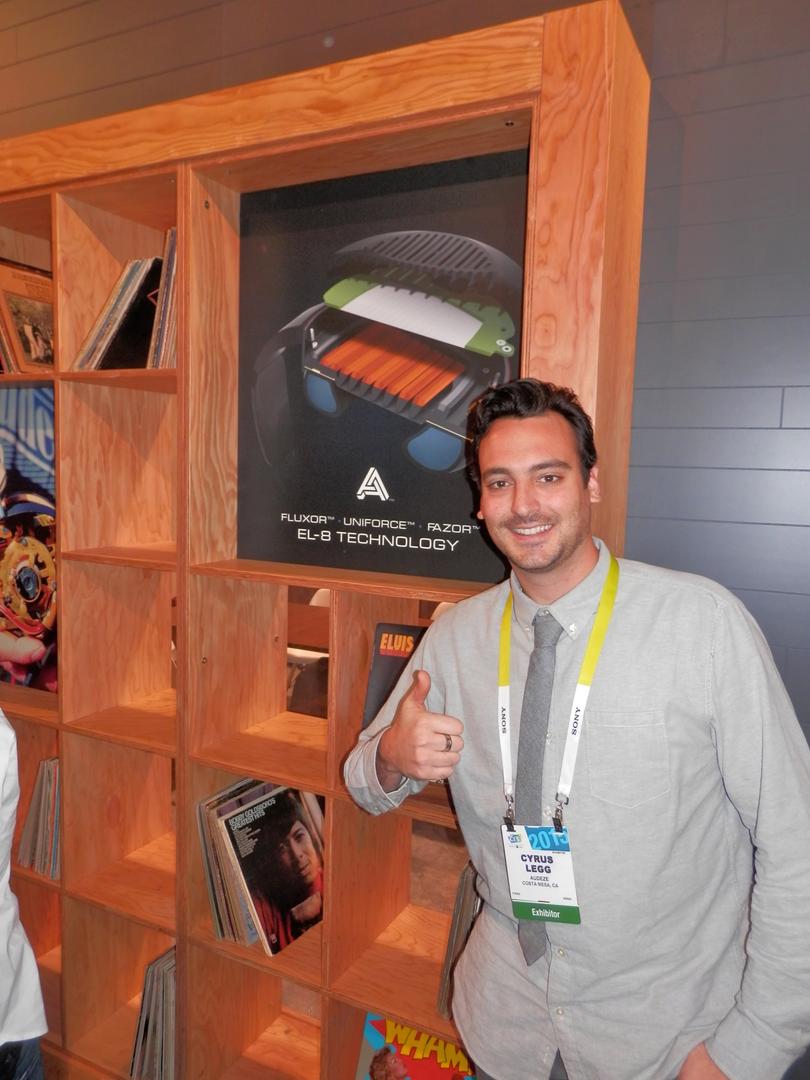 I heard both EL-8 (pronounced ‘elate’) models driven from the new Pono player, whose electronics were developed by none other than Ayre. The results were very impressive indeed.

Watch for more in-depth CES coverage from Hi-Fi+ over the next several days.

In the meantime, and as always, we wish our readers happy listening.