There’s something special about a tower speaker that takes two people to carry up a flight of stairs. High-end audio prizes size and weight, and in some cases that preference is borderline fetishistic, but for a tower speaker mass plays a real role, given the delicate balance of physical motion and stasis inherent in a box with vibrating cones. Big, honking, heavy, solid towers feel like they’ll sound good, and the new Polk L600 ($3498 per pair) does not disappoint in that regard.

The L600 is a part of Polk’s latest top-of-the-line Legend series. It’s a four-way tower with a wide-open bass port at the bottom, which I’ll talk more about in a second. Each tower weighs 77.8 pounds and is absolutely solid. Rapping a knuckle against the side produces barely a dull thunk, and the wide base makes this an extremely sturdy product—there’s no chance my toddler’s going to tip it over. Each speaker includes a 1″ Pinnacle ring-radiator tweeter, a 5.25″ Turbine cone for the midrange, and two 7″ mid/woofers. My review pair was matte black, but the L600 also comes in brown walnut. I particularly appreciate the feet—they were designed for both hardwood floors and carpets. They’re adjustable and I was able to get them perfectly level with very little effort, plus the soft tips provide a bit of isolation. At the opposite end of the tower from the base, at the very tippy-top, there is a strange, screwed-in rectangle that’s not noticeable unless you’re looking for it. That’s where the L900 height module for Dolby Atmos can be installed, but that’s an optional accessory not reviewed here.

Claimed frequency response is 28Hz to 50kHz, and I’ll say that lower number sounded very accurate in my listening room—though I’m getting ahead of myself again. Nominal impedance is around 4 ohms with a rated 86dB sensitivity, so these are going to be moderately difficult to drive, which I confirmed in my listening. A small and gentle tube amp’s not going to power these Polks to a satisfying level, so keep that in mind—Polk recommends 100Wpc. My Parasound HINT 6 puts out 160Wpc, and while that was plenty, I did feel that more would’ve been even better. I listened briefly using the NuPrime AMG STA in monoblock mode, which put out a very solid 300Wpc, and all that glorious power really made the L600 sing. My recommendation is to aim for higher wattage where possible, and to keep the sensitivity and low impedance in mind when matching equipment. 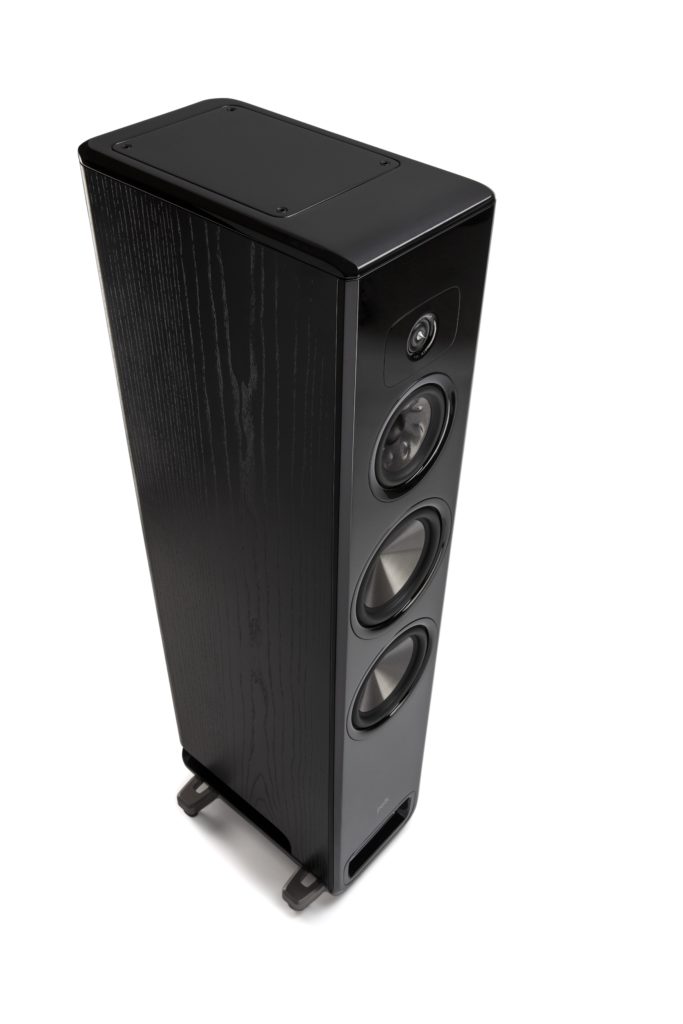 Finally, that bass. I grew up in a world devoid of bass: scratchy, tinny, pathetic little white iPod earbuds were the norm, and you had to crank them to ear-bleeding levels just to hear anything in the low end. Experiencing real bass is still a revelation for me, and I felt that body-shaking physicality with the L600s. It’s really impossible to write about the L600s without mentioning their massive bass port—the entire back bottom of the enclosure is cut out, making the speaker look as though it’s floating. Inside the port is a cone that’s pointed at the top and flares toward the bottom. Polk claims its “enhanced Power Port” eliminates noise and “chuff,” and lowers distortion for a cleaner air transition and a smoother, louder low end. Now, I can’t say for sure whether Polk succeeded in all that, but I can say without a doubt that the L600s have a massive amount of floor-shaking low end.

Honestly, despite what I wrote above, I’m not necessarily a bass head, but I do like my kick drums to approximate that chest-thumping feel you get during a live performance, and the L600s got the closest to that in my listening room that I’ve experienced so far. Even compared to my GoldenEar Triton Three Plus, which includes an active bass sub, the L600s dig down shockingly deep, and are similar or even slightly heavier than the Golden Ears. Whether that’s because of the port design, I can’t really say—but they sound very, very good. If you’re looking for bass and don’t want a sub, the L600s might be perfect.

Diving into listening, then, these review notes were written with my HINT6 as the primary amplifier. I started with Emma-Jean Thackray’s new album Yellow streamed via Qobuz in 44.1kHz/24-bit. Overall the album sounded massive, with multiple instruments playing at breakneck speed, and synths and drums slamming in and out together. The L600s kept all these disparate sounds and voices separate yet still cohesive. In “Say Something,” the singing, chanting voices were never overwhelmed by the big aggressive percussion, which spoke to the L600’s quality midrange. The squealing synth line remained discreet and never got shrill, which in the past was always possible when the volume was cranked and the top end got ringing.

Bass was solid and hefty throughout Yellow, but it was the voices that drew me in and kept me listening. The midrange had a nice, buttery smoothness, and female vocals were dialed in just right. Bass can overwhelm delicate midrange harmonics if it is out of control and wooly, but the L600 wasn’t bloated at all, while still retaining that surprising physical heft. Deep brass instruments in particular sounded fantastic. The L600s were equally good when Yellow turned huge and orchestral, or when it went for smaller, more traditional jazz-band sonics, such as on the track “About That.” The spacious, more free-sounding jam was still tightly controlled, and each instrument floated in its own section within the soundstage. Overall, I found the L600s were surprisingly accurate.

On Spiral, the new release from the duo Nicolas Jaar and Dave Harrington’s band Darkside, “Libertybell” opened with a smooth, tight groove, and bass came off heavy but restrained. Rhythm was on point and never lagged or felt overwhelmed by the low end. Jaar’s signature vocals were centered and smooth, but not lost in the relatively cluttered composition. In general, Spiral had a fresh, trippy, psych-rock sound mixed with break beats, and the repetitive motifs could come off flat and uninspired if not reproduced with heft and a touch of finesse. Fortunately, the L600s were up to the task, while maintaining upper-level subtlety throughout. On the latter part of “Libertybell,” Harrington plays a very high and fast solo, and it never resolved into screeching or discomfort, with just the right amount of sparkle on the finish.

In general, Spiral was a great example of how versatile the L600s could be. The album features midrange vocals, some high, droning guitar and synth work, and tight, deep drumming. It could sound like a muddy mess through less resolving speakers, but the L600s kept each instrument in its place, even when there were multiple layers and sounds all dropped on top of each other. I found this part of the review difficult to write, because I kept forgetting I had to pay attention to the little details—I wanted to get lost in the music. Another reviewing cliché, but very true in this case. The “soundscape” of Spiral invites the listener to vanish within its vast, seemingly infinite depth. The L600s were up to that task, with weight down low and a good bit of shine up top, and lots of pleasant listening in between. Tracks like “Inside is Out Here” begged for volume, and I was more than happy to turn it up and let that echoing mix of voice, drum, guitar, and droning noise crescendo into a massive waterfall of sonic heaven.

I ended my listening with a couple of jazz titles. First, the reissue of Cat by Hiroshi Suzuki. It was a funky, trombone-heavy banger from start to finish, in particular the track “Walk Tall,” which features a blistering sax solo from Takeru Muraoka. The solo was big and bold with the right amount of reverb and succinct attacks and decays. Drums were killer, especially those deep kicks and massive fills. When the trombone took over later in the track, it had the right amount of grit on those low, throaty blows, and bellowed the way a big brass instrument should. Throughout this raucous, breezy jam, the bass line remained centered and nicely fleshed-out, never getting subsumed within the noisy horns.

Next up was the Music Matters Jazz version of Art Blakey and the Jazz Messenger’s Indestructible. I find myself coming back to the opening track “The Egyptian” all the time for a masterclass in jazz composition. The way the horns play off each other was gorgeous—Fuller gets the first solo while Shorter’s sax plays a repeating motif beneath him. This mix of upper and lower lines worked extremely well through the L600s, and Fuller’s trombone had the right amount of grit and grime without getting too shrill or distorted. Meanwhile, Blakey’s drums were intense and suitably Blakey-esque: big, bold, and constant. His fills sounded on point, and his rhythm remained dead center. “The Egyptian” is one of my favorite Jazz Messengers tracks, and I’ve listened to it through every pair of speakers I’ve had in my listening room. With the Polks it sounded as fresh as it did the first time it blew me away. The sheer weight of the L600s, their ceaseless low end, their effortless bass lines helped fill out the song and give it an entirely different dimension that was lacking with smaller bookshelf speakers. I heard details from Workman that I missed in other listens—for a variety of reasons, but chiefly due to the L600s digging down deep. I walked away from that listening sessions greatly pleased.

My time with the Polk L600 speakers was well spent. I found myself rifling through my horrifyingly disorganized vinyl collection to pull out gems I hadn’t listened to in months. More often than not, the L600s were a match for whatever I threw at them: hip hop, bluegrass, prog rock, classical, and a whole lot more jazz.

If you’re looking for bass without a sub, the L600s would likely be more than adequate, but they aren’t just for bass-heads. The L600s have a pleasant midrange and a shiny upper end, and all that for a reasonable price. Highly recommended with no reservations.