The Plinius Hiato is a beast of an integrated amplifier. I don’t know how else to put it. It’s big, heavy, and at an indomitable 300Wpc simply outguns most of the competition. Plus it loves teaching loudspeakers how to behave. For me the Hiato recalls the New York street scene from the movie Crocodile Dundee, where our hero, an Aussie from the outback, is confronted by a mugger brandishing a modestly sized switchblade. To the assailant’s horror a bemused Dundee takes in the situation, then smoothly unsheathes and contemplates his own horrifyingly long Bowie knife. Shifting his eyes between the mugger’s weapon and his own, he utters the immortal line, “That’s not a knife; now this is a knife.” Spend a few hours with the Hiato and you know exactly what he means. Now this is an amp.

In the language of the Maori of New Zealand, Hiato means “harmony” or “bring together.” In an e-mail exchange with Plinius senior technician Aidan Moody noted that Hiato “came about from the need to build on our recent evolution of products with a integrated unit of the same high caliber.” Its beginnings can be traced to the Odeon multichannel amplifier and, later, the 225W SA-201 amplifier. The Hiato’s added muscle is courtesy of twenty output devices (ten per channel) and a commensurately larger power supply than the SA-201. The preamp stage is derived from the current flagship Tautoro, while the optional phonostage clones design and topology directly from the Koru phono preamp. Moody noted that “special attention was paid to noise sources such as power rails and control data in particular. PCB’s were carefully laid out to ensure correct treatment of signals and appropriate distances to isolate any unwanted effects from the audio. Wire and track lengths are equal and layout is highly symmetrical to ensure channel equality.” Additionally, key choices in components, connections, and wire types were also made.

The Hiato carries over the wrap-around front panel from the Odeon and 9200. Stylistically, the quasi-industrial look with its exposed blue subchassis has aged well. Grab handles at the rear will aid the courageous few who attempt to hoist the Hiato into a rack. Per current Plinius practice, the broad front panel houses no “big-screen” numerical display—a potential source of noise. Rather, each input is indicated with a row of bright micro-LED pin-lights. A single gently pulsating beam signifies the Hiato rests in Standby mode. There is a change to the mute feature as it’s now only accessible from the remote control. In a pinch, I like being able to mute from the component as well. The Hiato offers four line-level inputs with WBT RCA connectors, an optional all-new phono input (derived, as noted, from the high-performance Koru and adjustable for gain and loading), and balanced XLR inputs for CD and Line One. There’s also a home-theater bypass, a ground-lift toggle, remote IR output, 12V triggers, and a 3.5mm front-panel jack for portable media. Four pairs of speakers terminals are provided for biwiring. In a harmonious nod to going green, the Hiato also adheres to the latest international standards to eliminate substances harmful to the environment. Finally, there’s an aluminum full-function remote with the kind of nightstick heft that would make a prison guard proud. 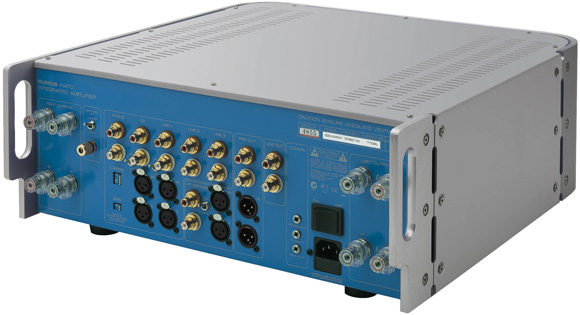 It’s fair to say that I’ve been TAS’s unofficial Plinius reviewer for a few years. Recently I’ve written about the 9200 integrated, the CD-101 player, and the powerhouse SB-301 amplifier. [I lived with the Plinius Odeon multichannel power amplifier and thought it was of reference quality.—RH] Let me be clear from the outset—the Hiato is not just a beefed-up 9200. Nor is it an SB-301. Its sonic character has the Plinius signature—rich though not overly ripe mids, solid tightly controlled lower octaves, and superbly extended treble. Where the 9200 seemed to show its musical best from the midrange outward, the Hiato starts from a deeper place, virtually redefining the nature and timbre quality of low-frequency extension in this segment of the market. Rocket-sled transient attack has always been a staple of Plinius designs, and that hasn’t changed. But the Hiato is even more dynamically resourceful than previous integrated models by virtue of its massive power supply. There’s little to no sense of compression; with dynamics it throws lightening bolts. The only thing comparable to the experience of listening to the Hiato through a major speaker system like the Magico V2 (to be reviewed in our next issue) would be joining the circus and having yourself shot from a cannon.

The Hiato’s greatest achievement, however, is reserved for subtler issues, particularly the interplay of tonal and micro-dynamic contrasts. It somehow draws sharper distinctions between adjacent images than most amps. It creates a sort of sonic topography that places each vocal and orchestral player in physical relief vis-à-vis one another. Put another way, each section of the orchestra—even each instrument within that section—is heard delivering specific, highly graduated volume and timbre information, accenting note-by-note distinctions and firmly grasping them from beginning to end, as in the Tchaikovsky Violin Concerto with Anne Sophie Mutter and the LSO [Telarc].

The Hiato is not a sweetening device. And it doesn’t tend to darken images. Its character has a cooler, drier dimension, particularly in the extended treble but also in the lower octaves where it exhibits such uncanny control. That’s not to say the Hiato is a heartless, cold fish of an amp. It will reveal a truly romantic recording for what it is, but it will also allow you to hear a pair of backup singers overloading a microphone deep in the mix on a Linda Ronstadt track like “Poor Pitiful Me” from Simple Dreams [Asylum]. And it exposes layers of information in the way an archaeologist brushes away millennia of dust and debris from a Bronze Age relic no bigger than your thumbnail. But don’t look for it to have the emotive warmth of the Pass Labs INT-150 or the soothing, delicate, and comparatively darker top of the tube-hybrid Magnum Dynalab MD-309. Plinius amps have generally opted for a fast and slightly brilliant presentation, and so it goes with Hiato.

As I had just installed the Sumiko Celebration Palo Santos moving-coil cartridge in my system, the timing couldn’t have been better when it came to giving the Hiato phonostage a whirl. It’s easy to access the gain and loading DIP-switches from the Hiato’s back panel. At first I noted a bit of low-level hum—all traces of which disappeared beneath normal playback levels. However, I have since been informed that this was an early-production-run anomaly and has been solved with minor re-routing of some internal wiring. Nonetheless, compared to my current reference the JR Transrotor Phono II, the Hiato fairs very well indeed. It has a warmer, silkier flavor than the JRT and exhibits a stronger and more specific sense of the three-dimensional. Bass performance is roughly on a par with the JRT, which is to say very good. In fact, once I began listening to LPs through the Hiato I essentially gave up listening to digital for most of this review’s duration. The Plinius unit breathed new life into old LPs, uncovering miniscule details that I didn’t remember hearing before. Even on a recording as familiar as Fleetwood Mac’s hit Rumours [Warner], the Hiato’s lack of compression and accuracy of timbre made songs like “Dreams” and “Second Hand News” sound as if they’d been recently remastered. Like the best amplification, the Hiato has the resolution to bring out the inner life in acoustic instruments and vocal harmonies. On Rumours I developed a new appreciation and respect for Mick Fleetwood’s colorful and textured drumming, Lindsey Buckingham’s stunning guitar work, and the overall sonic brilliance of the production. 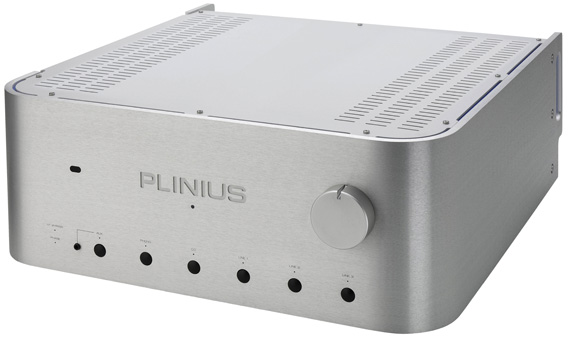 On the direct-to-disc recording The Power and the Glory [M&K RealTime], the Hiato brought the full breadth and dynamic voice of the organ of the first Congregational Church of Los Angeles to life. More than any single attribute I admired the absence of an electronic curtain overlaying the soundspace. Instead, there was an organic (absolute) sense of music simply occurring in space rather than being reproduced via a hi-fi. Soundstage depth was superb, and thanks to the thirty-two-foot pipes and the intensity from the high-pressure trumpets, the scope of the venue began to take shape in my room. What really struck me was the ultra-low-level detail that the Hiato seized upon during “The Bells of St. Anne de Beaupre.” Here, the organ plays a deceptively simple motif of delicate and seemingly distant church bells supported by a low-level bass tremolo. If your system (and tonearm/cartridge) is capable, this track will recreate a voluminous acoustic space and the weird rumbling sense of a seismic fault-line developing beneath your house. I’ve never heard this track reproduced in my room at this level of excellence.

Since I reviewed the Plinius SB-301, it’s only natural to draw comparisons. The Hiato reveals a cooler personality in the upper octaves than the rosier complected SB. Some of the ease and double-jointed suppleness that is so much a part of the SB’s lower and middle octaves tightens somewhat. Harmonic energy grows a little harder; the softer currents of air that seemed to lift the treble for the SB-301 are a little thinner and cooler with the Hiato. On a track like Bruce Springsteen’s “Thunder Road” from the Hammersmith Odeon concert, the Hiato accentuates the speed and clarity of Springsteen’s vocal, but there is also a little less bloom expanding beyond the immediate orbit of the image.

Another point bears discussion. Do you need 300Wpc? Yes and no. Two highly demanding speakers I had on hand, my own ATC compact monitors and the Magico V2 never came nearly as alive as when the Hiato was propelling them. The soundstage lacked elevation, and both speakers sounded darker, looser, and more dynamically stifled. The Hiato removed these restrictions and artifices. Musical textures increased in complexity to the degree that I began to forget the overall chain of electronics. I became involved in a more basic elemental way. So the short answer is, the Hiato truly shines at being assigned the large-caliber jobs that require bringing low-sensitivity or demanding speakers like the ATC or Magico into line. Certainly, less demanding speakers like the Verity Audio Finn (reviewed in this issue) are also going to benefit from the Hiato—its preamp stage is superb—but a lot of its output potential is just going to sit around idling.

The Plinius Hiato is an audacious force to reckon with. Under the proper circumstances—paired with an exceptional loudspeaker and source components—only a handful of competitors can challenge it. While the last word has yet to be spoken in this segment, the Hiato needn’t worry, at least for now. This is benchmark performance that speaks volumes.

The World’s Most Expensive Loudspeakers