How do you put a smile on the face of an oenophile and an audiophile at the same time? Easy—just take a peek inside the wooden box bearing the name Playback Designs. Not only will you discover digital audio in the form of the Sonoma Series Merlot DAC or Syrah Music Server, but you’ll also encounter a very nice bottle of red wine along with a crystal wine glass.

Actually the intersection of fine wines and high-end audio is a familiar one. It’s a shared passion for many, combining a dedication to the finer things in life, a penchant for extreme quality control, a sense of exclusivity, and of course, the hobbyist mentality for categorizing and collecting.

This symbiotic relationship clearly struck a chord with Playback Designs’ Andreas Koch, leading the company to partner with Santa Ynez winery Carhartt, founded in the mid-1990s, and noteworthy for, you guessed it, its Merlot, Syrah, Pinot, and other varietals. If the Koch name rings a high-resolution bell it should. Back in the 90s, Koch worked at Sony in San Francisco, where he was leading figure in the development of Sonoma, the first DSD recording and editing workstation for the production of SACDs. 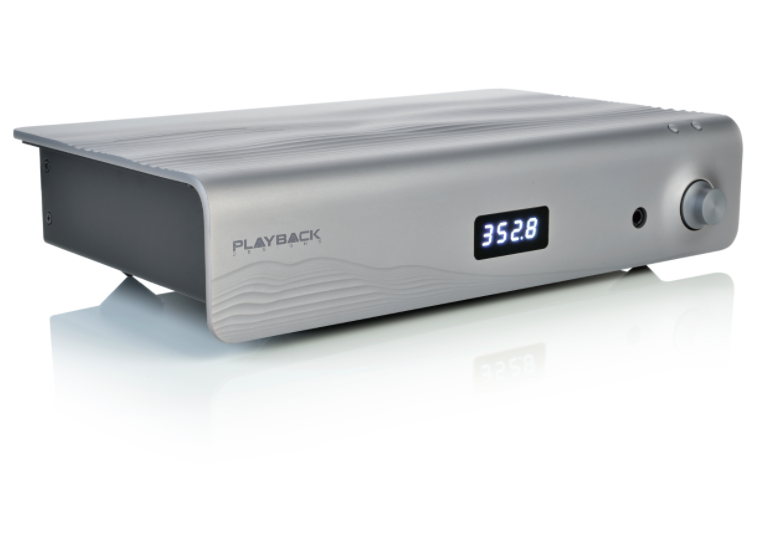 Putting aside my glass of red for a moment, here’s a little background. Playback Designs (PBD) was founded in 2008. Its Sonoma lineup debuted a couple of years ago and comprises three discrete components operating like a tag-team. Considered here are the Merlot DAC and the Syrah Music Server. Rounding out the line are the Pinot ADC, an analog-to-digital converter, and a D/D converter known as the OpBox—a board mod-kit for Oppo universal players that captures all the native audio data supported by the Oppo (including SACD and Blu-ray) and relays it via a direct digital link to the Merlot for conversion. I’ll leave these last two for another day.

Encased in an aluminum enclosure with organic wave-like ripples flowing across the top cover and front panel, the Sonoma gear looks uniquely elegant. The Merlot DAC includes AES, SPDIF, and USB inputs and will handle formats up to 384kHz PCM and 11.2MHz DSD (DSD256). The AES and SPDIF inputs also support DSD via DoP. The Merlot uses a differential discrete DAC of PBD’s own architecture and design. The rear panel sports a set of balanced and unbalanced analog outputs. The unadorned front plate has a small, lighted panel that provides information about inputs and playback sample rate. Additionally, there’s a headphone output with excellent sound quality controlled by an analog volume control. The headphone amp is a discrete design driven directly by the DAC and separated from the fixed line-level outputs.

Getting to Know the Terroir
Controlling and organizing the flow of digital music is the Syrah Music Server. It uses a reconfigured version of Windows 10 Pro for audio and network processing. Its hardware is based on the Intel NUC, which uses a Celeron processor and is outfitted with 4GB of RAM. Syrah includes 2TB of internal storage (solid-state drives are available at extra cost), but it can also be connected to self-powered external storage, such as hard drives and networks. Like the Merlot it welcomes virtually any file format or native sample rate. Syrah also supports DLNA streaming and services like Tidal from any AirPlay-supported device. The Syrah package includes an outboard disc drive so users will be able to rip compact discs to Syrah’s internal storage. Playback software is the popular JRiver media server. The remote app for tablets is loosely based on JRemote, but has been customized for fully automatic ripping (with dbPoweramp), metadata retrieval, backup, metadata editing, and some other features. 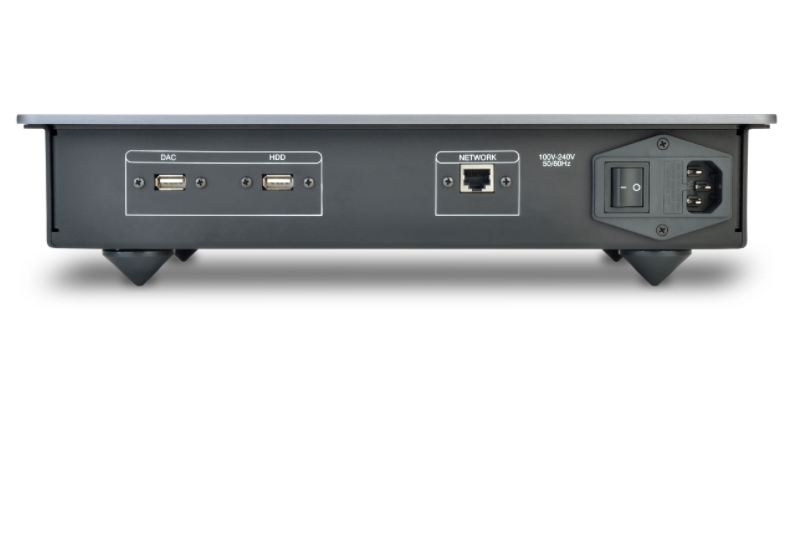 In a significant break from many in this segment, the Sonoma series is based on an open architecture. PBD does not use any off-the-shelf components, including DAC chips. The platform is user-programmable, which ensures future-proofing. Plus, any new algorithms that PBD offers can be uploaded by the user as they become available, free of charge. Rather than using fixed-frequency-domain filters that measure well with sinewaves but perform poorly with transient music signals and cause digital ringing, Playback uses time-domain-variable filters that continuously adjust to the momentary transient characteristics of the music being played. Playback Designs has also eliminated the PLL, which is used to control and minimize jitter, in favor of its own approach. In this way, PBD states, it can “extract a clock from any incoming digital audio stream that results in less harmful clock jitter than any other known method.” Merlot also employs a linear power supply with a custom toroidal transformer with magnetic shielding. Support along with firmware and software updates are available on the Playback Designs site.

Setup was relatively easy. Frankly, I always hold my breath when adding a music server to my network, but except for the need of a modem reboot there were no sweaty-palm moments. Merely connect a USB cable to link the Syrah to the Merlot, and the system is good to go. The Playback Designs app, which I downloaded to my iPad from iTunes (Android is also available), offered a series of well-organized, navigable menus, which included a wide range of settings and attractive, readable graphics. Playlist organization, as well as the agility to dive deeper into an album’s info and track selections, was excellent. I also appreciated the volume control and the soft mute, which gently fades the track’s volume and smoothly brings it back up. There’s always a learning curve with an app, but this one was particularly well executed.

Partnering the PBD with a great chain of electronics is critical to extracting what it is capable of. It loved the Ypsilon Phaethon integrated to such an extent that I suggested they get a room. Also making beautiful music together with the Syrah/Merlot was the Constellation Inspiration 1.0 integrated (review forthcoming) and the MBL Corona C51. Cabling was the Audience Au24 SX. In a system of this resolution, a high-performance USB cable makes a significant difference, and once again I called on my go-to USB cable, the Audience Au24 SE.

Uncorked
It was abundantly clear at the outset that listening through the Syrah/Merlot was going to be memorable—like tasting a first-growth Bordeaux for the first time. The overall tonal character was ripe with a liquid and lively sweetness in the lower treble. Potentially aggressive wind ensembles, or the trumpet solo during the Manhattan Jazz Quintet’s Cover of “Autumn Leaves,” were reproduced with genuine transient and harmonic complexity, followed by a bloom of reverberant decay. Wine fans might call the PBD’s tonal balance “fruit-forward,” but for me this was digital reproduction with a lively sense of musicality. Classical music, either symphonic or chamber, had a ripeness and an elasticity and an acoustic openness that stood in sharp contrast to earlier generations of “Brand X” digital with shriveled treble harmonics, added edge, phasiness, and smear, paper-thin imaging, and a flattening of the soundstage that made every performance sound as if it had been run through a colander. To my ears, Playback Designs sounded more like a digital/analog hybrid, able to hang onto digital’s obvious strengths, such as tonal neutrality, broad dynamics, and firmly resolved low frequencies, while also preserving the harmonics, air, and fluidity of the real thing.

What also propels the Syrah/Merlot into the upper echelon of digital audio was its ability to bring clarity and resolution to instruments at the lowest volume levels. Like a sonic zoom lens Syrah/Merlot zeroed in and precisely described the fine grit of a brushed snare, the singing rattles of a tambourine struck at the back of a symphony hall, the ripple of air off the string from a concert harp, the gentle drone of Joni Mitchell’s dulcimer., This represented the PBD at its finest, and made it one of the first DACs in my experience that could musically and sonically walk and chew gum at the same time. 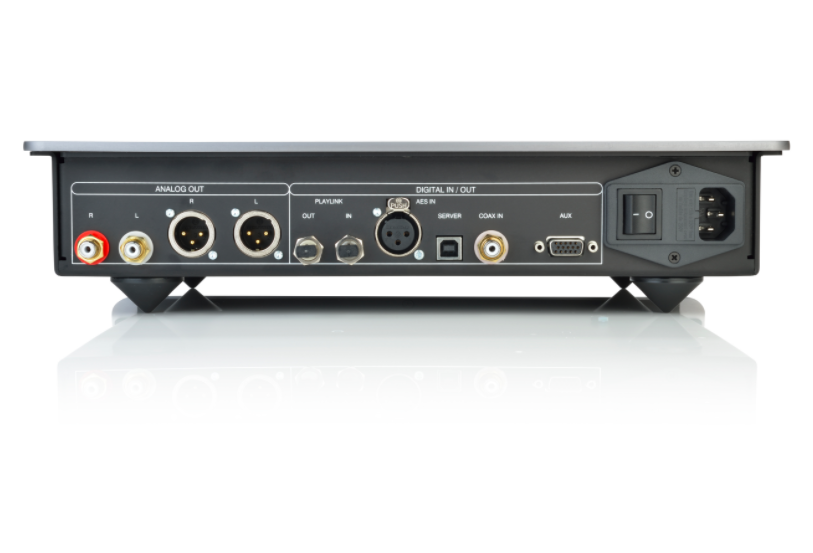 I’ll Drink to That!
However, what ultimately did it for me was PBD’s resolution of a key issue that separates the good from the great in the digital world—that is, how well the component deals with music’s dimensional world. Can it reproduce a layered section of violins without smearing, or can it track the placement of percussion cues across the back of a symphony hall, or that final reverberant decay of a pair of timpani at the furthest recesses of an auditorium? The PBD can. For example, during the Rutter Requiem, the movement of bass resonances and decaying harmonics throughout the acoustic of the Meyerson Symphony Center was truly remarkable. Overall I felt that the PBD staged music with a very slight forward tilt, at least in comparison to my reference music server, the Lumin S1. Yet, it still extracted sufficient depth to remain convincing. Its lateral staging was exemplary.

Finally, all of the forgoing impressions added to the skill with which the Syrah/Merlot reproduced an instrument’s physical “being” within ambient or three-dimensional space. Vocalists, for example, were not disembodied blobs of unmoored sound, but firmly grounded images with an embodying sense of air dispersed around the edges of their voices. When I cue up the double-DSD file for Cat Stevens’ “Hard Headed Woman,” it’s the intro of the flat-picked acoustic guitar that either sparks my attention and leads me to listen further, or causes my mind to wander off. What is so darn special about the guitar and the overall track? Simple—it’s a classic, all-acoustic, minimalist recording where the live, unvarnished sound of musicians playing together in real time has been truthfully preserved. As reproduced through the PBD, that’s the kind of goosebump realism I encountered.

This impression inspired me to fire up the turntable and listen to my original British Island pressing of Cat Stevens’ Tillerman. This sonic comparison actually narrowed the gap rather than increased it. The DSD struck me with a little more middle-range presence, a bit more overall density, and a thicker, darker bass. The analog in comparison was a bit more fragile and intimate, cymbals and flat-picked acoustics sounded lighter and more delicate. Stevens’ vocals were slightly more forward with the DSD, while the LP found a hint more front-to-back dimension but less energy. Overall a relative toss-up. Those with fancier analog rigs than mine will no doubt argue the case, but what is inarguable is that high-order digital like the PBD is drawing ever closer to my beloved LP playback.

A Sobering Experience
As this listening evaluation drew to a close, I was left with the sense that the historical divisions between digital and analog continue to fall away even as each segment keeps surpassing its preceding generations. The Merlot DAC and Syrah Music Server produced some of the most compellingly musical audio that I’ve heard from a source component—digital or analog—in quite a while. And if that’s not worth raising a glass to and celebrating, well, then I don’t know what is. Drink this one in while you can.