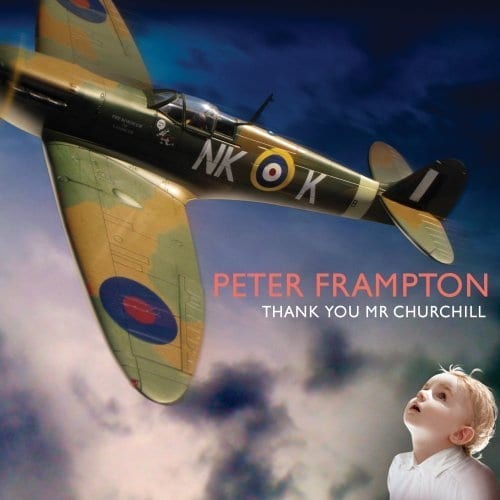 The first thing I want to say about Peter Frampton’s latest record is that it surprised me, and the second thing I want to say is that it surprised me in a good way. Aging rock stars are supposed to become self-derivative, repeating formulas that used to work but that yield increasingly small dividends both artistically and commercially—and, for reasons that we need not go on about, they’re supposed to strain a bit when it comes time to crank up the volume. Sometimes you wonder if, had each new release been a debut, any fuss would have been made about it at all.

Thank You Mr. Churchill shares none of those pitfalls. Catchy melodies abound, and none of them sound like thinly disguised facsimiles of the days when Frampton was a teen heartthrob. In fact, although the sunny pop sound of the seventies occasionally surfaces, Churchill is often darker and more aggressive than early Frampton—and more serious. On the opener and title track Frampton tips his hat to Winston Churchill “For making sure that I was born.” Although it’s not stated overtly, we assume that Frampton’s gratitude extends to a few billion other births as well. That sounds like the recipe for sappiness, but the music is ominous straight out of the gate, as if warplanes were gathering, and a surprising lyrical twist—a plea for peace—helps the song avoid straying into predictable feel-good territory.

Five of the first six tracks rock hard (at least in places) and feature unrestrained, sometimes virtuosic guitar solos that again come as a surprise. Guest vocals by Frampton’s son Julian on “Road to the Sun” help provide an explanation for the new sound, as does the appearance on most of the album by Pearl Jam and ex- Soundgarden drummer Matt Cameron. Apparently Frampton has listened to some newer rock, and he has assimilated it well. In fact, songs like “Solution” and “Road to the Sun” might appeal to young listeners more than his long-term fans. As catchy as a Beatles song and as good a tune as Frampton has written, “I’m Due a You” should please both camps.

Churchill does, however, lose steam toward the end. A lengthy instrumental, “Suite Liberté,” is little more than filler. In spite of the fact that Motown’s legendary Funk Brothers appear on “Invisible Man,” it sounds formulaic and safe; suddenly the chemistry among musicians that characterizes the rest of the record is missing. And heartfelt though it may be, “Black Ice” is one of those bittersweet, highly personal songs about a relationship that feels more like a diary entry than a fully-realized piece of music. In fact, the weakest moments on Churchill tend to occur when Frampton looks inward. Even some awkward stabs at writing socially-conscious lyrics are offset by impressive songcraft.

Much care was given to the recording of Churchill, with vintage instruments and amplifiers and 24-bit/96kHz high- resolution audio—and it’s also available on vinyl. The follow-up to Fingerprints, a 2006 Grammy winner for Best Pop Instrumental Album, Churchill provides the sustained career momentum that has eluded Frampton since Frampton Comes Alive! set the bar so high that both Frampton and his audience must have wondered if he would ever again become a relevant artist. Apparently he has.

Steve Tibbetts is less famous than some other guitarists in […]