While the Pear Audio Blue Kid Thomas turntable ($5995) has a unique look, there are some things about its appearance that may seem very familiar. There is good reason for this because the Kid Thomas was designed by the late Tom Fletcher (of Nottingham Analogue fame)—as were all the Kid ’tables in the Pear Audio Blue lineup. Some of those visual similarities are the look of the motor pod, the dampening rings around the platter circumference, and the shape of the tonearm.

Peter Mezek, the principal of Pear Audio Analogue, was a longtime friend of Tom’s. The two worked together to create the Pear Audio Blue lineup. According to Mezek, Tom Fletcher wanted to advance the performance of his older designs; to do so, he started with a clean slate. According to Mezek, the new design ideas “led to great improvements in sonics, musicality, realism, phasing, coloration, etc., which would never have been possible trying to further develop the old designs.”

Pear Audio Blue’s production initially took place at the Nottingham Analogue factory (before Fletcher passed away). Today, all Pear Audio Blue products are hand-built by Mezek and his team in Slovenia.

One of the key principles in creating the Kid Thomas was the careful mix of materials. Pear Audio Blue’s goal is “sonic harmony.” The idea is to marry materials in a way that results in the turntable system that performs as a whole better than the sum of its individual parts. To achieve this, Pear considers the size and shape of all turntable and tonearm components, and their effect on music reproduction. Each part, no matter how small, is tested for resonance characteristics and listened to in the system for optimal performance. If a part doesn’t measure up, it isn’t used; if making something prettier results in poorer sound, a different finish is applied. One outcome of this approach is that less metal is used in the Pear Audio Blue ’tables and ’arm than in previous Fletcher designs. 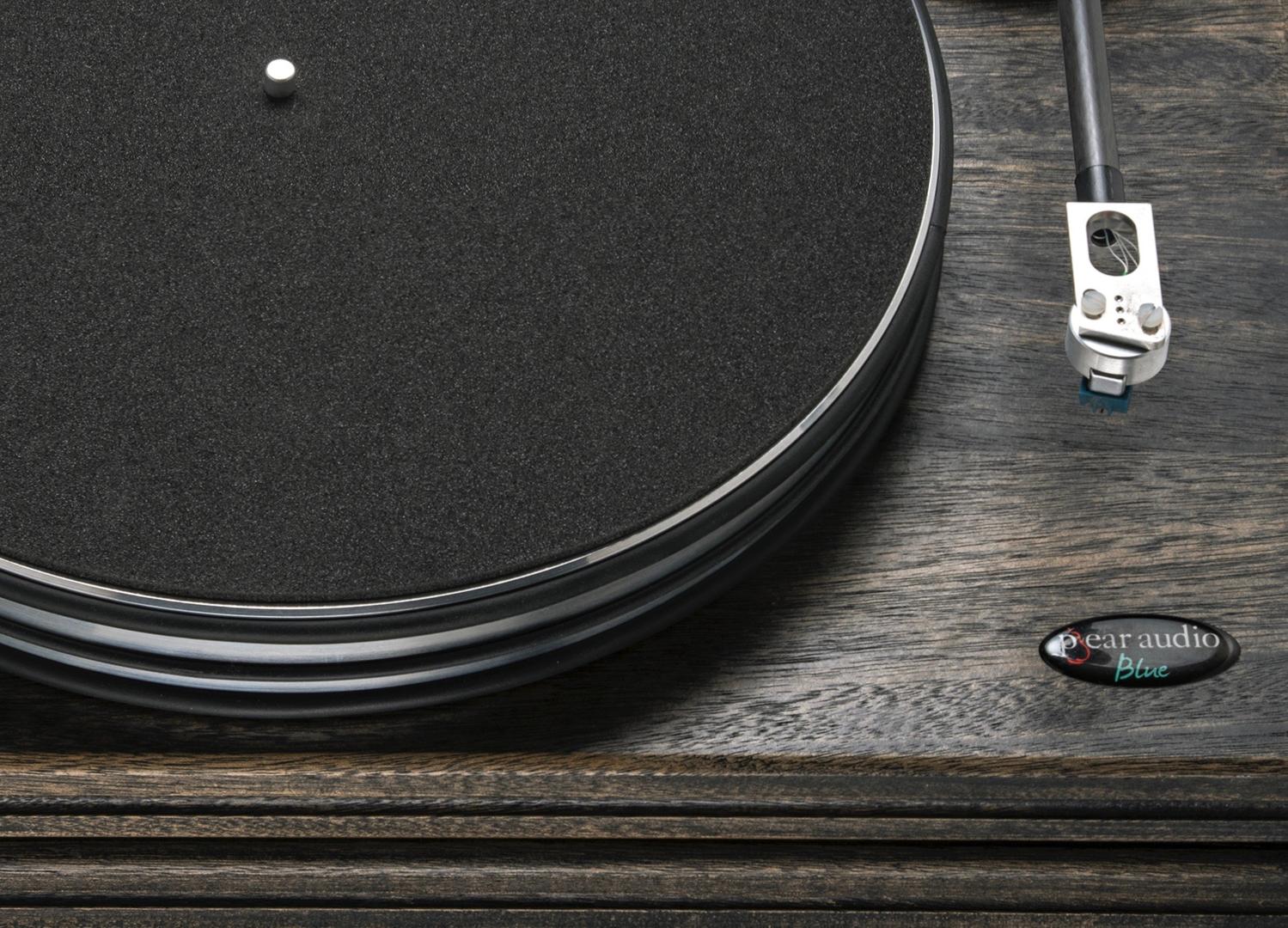 The Kid Thomas has two plinths, each approximately 30mm thick, in an isolation sandwich. The isolation is provided by eight rubber feet recessed in cavities under the top plinth. (The plinth is made from an unspecified wood with properties that, Mezek says, Fletcher had been searching for most of his life.) The lower plinth has three height-adjustable support feet with smaller rubber feet attached underneath for additional isolation. There are two support feet in the front corners of the Kid Thomas and one in the center rear of the ’table. The front support feet have two small half-sphere-shaped rubber feet under them while the rear support foot has nine. There are two circular cutouts in the lower plinth for the platter bearing and tonearm wires to pass through. An additional circular cutout holds an insert with what looks like a flexible closed-cell rod that (when fully assembled) touches the bottom of the platter. The flexible rod is said to aid in maintaining speed stability. The upper plinth has one open circular cutout for the flexible rod. The two additional circular cutouts hold the lower bearing assembly for the platter and the tonearm base with mounting collet. When both plinths are properly aligned at their corners, a U-shaped cutout on the left side can be used to enclose the motor.

The motor is nested in a housing that is friction-fitted into an outer housing. There are three adjustable that allow for setting the proper height. The twenty-five-pound aluminum-alloy platter (approximately 58mm thick) has four concave grooves along the outer edge that hold rubber dampening rings. These rings effectively attenuate what would otherwise be a high-pitched metallic sound that can be heard if the platter is struck when the rings aren’t in place. Attached to the lower center of the platter is a bearing shaft that mates to the bearing assembly on the upper plinth. Once the proper amount of oil is added to the outer bearing assembly, the platter/bearing can be inserted to complete the main ’table assembly. The final piece of the platter assembly is a foam platter mat that provides additional isolation.

The Cornet 2 tonearm ($2295) is said to be a unipivot, but the actual design is a bit more complicated than a typical unipivot. The tonearm pivot comprises two short parallel metal bars (traveling in the same plane as the headshell to counterweight) that are located horizontally on either side of a roller bearing. The roller bearing sits atop a unipivot shaft. The roller bearing and horizontal bars restrict ’arm movement in unwanted directions and help keep azimuth settings stable. The armtube is made of carbon fiber with the long grain oriented between the headshell and pivot point. The brass counterweight is secured to the ’arm by a springy, friction-fit, open C-shape clamp. Tracking force is adjusted by sliding the weight back and forth in this spring clamp. The ’arm has a collar with height-adjustable screw for fine VTA/SRA adjustment, once VTA has been roughly set with the base collet. Offset angle and overhang, as well as provisions for anti-skate and azimuth, are also user-adjustable.

The optional external power supply ($1995) accepts connections from the ’table motor and the AC inlet. (There is a power switch on the rear of the unit.) The external power supply has a rotary frequency control on the front that allows the user to precisely set the speed of the turntable. Once adjusted, there should be no need to change the setting during normal use. The motor used on the Kid Thomas is a low-torque design that helps to reduce motor vibrations that otherwise could be transferred to the platter via the drive belt.

The complete turntable package (Kid Thomas, Cornet 2, and external power supply) arrived in a single triple-walled cardboard box with an additional triple-walled internal cardboard surround. The assembly was divided into four sections separated by foam inserts. The lower section contained the platter, the second level from the bottom held the double plinth, and the third section from the bottom had accessories. The final top section contained three boxes that held the tonearm, motor assembly, and external power supply. Assembly of the ’table was fairly easy when following the instructions in the user manual. The manual mentions, whenever possible, letting the dealer set up the tonearm to get the best sound from the system. Without going through the cartridge set-up routine, there are some things to be aware of. All of the fittings are friction-fit and the adjustment screws are nylon (except the VTA/SRA fine-adjustment screw). Pear Audio recommends just enough pressure to secure the fixtures and no more. The distributor mentions that making screw connections too tight will result in brighter sound.

One of the many reasons vinyl playback is enjoyable to those who delight in the format is the hands-on experience: touching a record; placing the LP on the platter; positioning the tonearm; watching or hearing the needle seat itself in the record groove; marveling at the way such an old technology can bring so much life to music. While vinyl may not be for everyone, music played back on a finely tuned analog setup is something to behold for those inclined to experience joy from this wonderful audio-playback medium. The Kid Thomas adds to this hands-on nature of playing vinyl by literally requiring hands on the platter to give it a spin. The low-torque motor of the Kid Thomas is always on and always running. In order to get the motor’s spindle to move and sync with a rotating platter, the operator must give the platter a healthy nudge to get things going. What seemed like an extra step initially quickly became a satisfyingly engaging step in the process of playing the LP. To stop the rotation, the same procedure is done in reverse with the placement of hands (fingers actually) on the outer side of the platter to slow it to a stop. This is a simple and effective platter start (and stop) tradeoff for the low-torque motor implementation.

A first listen to the Kid Thomas was conducted with the Ortofon Cadenza Bronze supplied by the U.S. distributor. This combination was played as set up by the distributor for a couple of weeks before I performed a full reinstallation of the cartridge. The initial sound was promising but the goal at that moment was to put some playing time on the ’table until a full cartridge setup could be performed.

Once the full setup of the Cadenza Bronze was complete, the sound of the Kid Thomas system was very quiet, full-bodied, rich in the midbass to lower midrange, and smooth albeit somewhat reduced in amplitude in the high frequencies. Resolution was very good on medium-to-loud music but low-level signals had a slightly opaque character. On Chris Isaak’s “Kings of the Highway” from his Heart Shaped World LP, the Kid Thomas blended his overdub vocals into a slightly diffused single entity. On the plus side, the bass (while a tad full in the power region) was big and powerful with a soft starting transient that was made up for by a larger development of the notes. Every LP played was delightfully listenable, approachable, and entertaining. The sound was how the ’table had performed at some of the U.S. audio shows—full, rich, musical, and never aggressive. 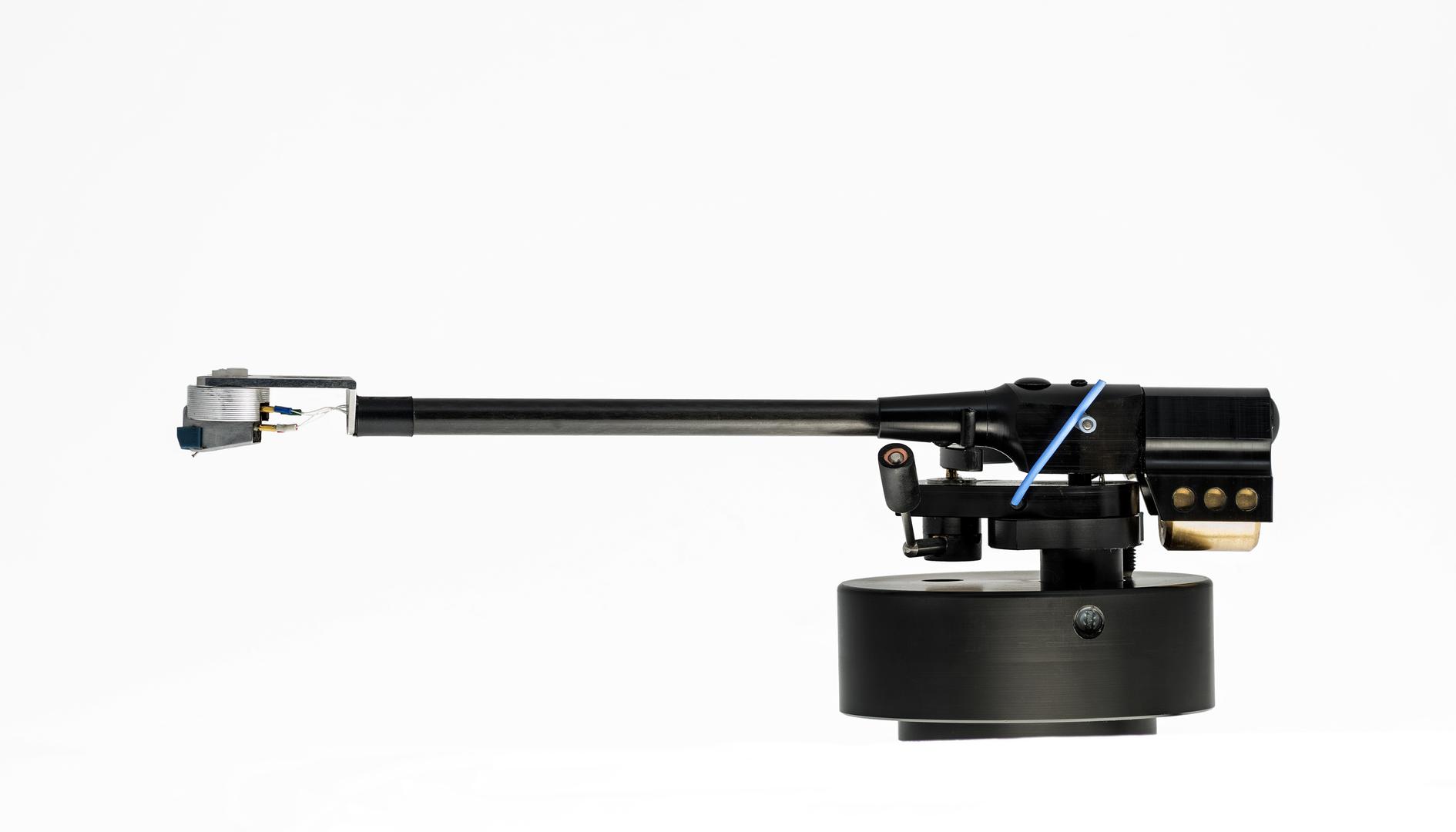 To kick things into a higher gear, the van den Hul Colibri XGP was drafted for cartridge duties. The established character of this particular cartridge is clarity, speed, low-frequency warmth, non-aggressive behavior (with careful setup), and well controlled (but generous) high frequencies. Playing “Kings of the Highway” with this cartridge tightened up the bass substantially and added more transient drive; guitars sparkled, with individual notes sounding better delineated; the soundstage became more saturated with energy; and Isaak’s overdubs were clearly discernable. Every aspect of the Colibri’s performance was on display to one degree or another.

Regardless of which cartridge was mounted on the tonearm, music never ventured into aggression, never lost drive, and never lost macro-dynamic impact. The soundstage was always wide and deep with the degree of saturation dependent of the cartridge installed at the time. The noise floor remained subjectively low—a trait not often found to this degree on sub-$10,000 ’tables. With either cartridge, it didn’t matter if the music played was jazz, classic rock, heavy metal, hip-hop, folk, blues, or classical. Whether solo piano or orchestral crescendos, the ’table performed with the same fundamental sonic character.

Having been able to contrast the Kid Thomas/Cornet 2/external power supply with different cartridge types, it is safe to say this analog combination serves as an excellent platform to play music and host your cartridge of choice (within reason and compatibility). Given the admirably low noise of the Kid Thomas, the materials-management approach to the design of this $5995 turntable appears to have been a success. The entire package offers subjectively quiet playback and reproduces music in a way similar to more expensive turntable systems. This system’s smooth playback, coupled with the level of silence displayed, earns a recommendation for an audition. Just be sure to choose the phono cartridge that fits your listening tastes—the reward is waiting.

Josh Berman Trio: A Dance and a Hop