In 2009, Ortofon introduced the $4200 MC A90 phono cartridge to commemorate its 90th year of operation. The A90 was a limited-production item only available to 500 owners. As it was a unique and ambitious product, the A90 positioned Ortofon to compete in the upper tier of cartridges available. Within the pages of an earlier issue of The Absolute Sound, our very own HP and JV (Issue 208) shared opinions about the A90 set up and auditioned in their individual systems. Having been involved with the installation of the A90 in JV’s system (among many others), using the set-up procedure documented in the pages of Issue 244 and now available online, the cartridge’s performance proved to be the best Ortofon had achieved at the time.

Two-and-a-half years later, Ortofon released its flagship phono cartridge, the $8924 MC Anna. Building on the successful Selective Laser Melting (SLM) manufacturing process first used in the MC A90, the MC Anna continued the theme with a larger, closed-body design made of titanium. Along with a new magnet system, enhanced damping, and a host of additional adjustments, the MC Anna easily became Ortofon’s highest-performing (and highest-cost) cartridge to date. Its reputation as a top-tier performer in capable systems is well deserved.

Fast-forwarding to 2015, Ortofon’s 95th anniversary is being celebrated in a similar fashion with a 500-piece, limited-run moving-coil cartridge. This time the cartridge is the MC A95. Five years of experience designing the most advanced cartridges has allowed Ortofon to combine all the technical advancements and knowledge gained from producing the A90 and Anna into what appears to be an ideal mix of the two cartridges. The resulting performance of the A95 ($6499) is much closer to the performance of, but not better than, that of the MC Anna in most respects, and surprising in others. At a cost that is roughly half the difference between the A90 and the Anna, which could make it more affordable to a greater number of readers, the MC A95 may be considered the next step by those who desire to go beyond the A90 but can’t quite reach the higher-priced Anna.

Arriving nicely packaged in a silvery wooden box within the same-color, foam-insulated cardboard outer box, the MC A95 (Serial #001) was mounted to a clear plate. Included with the cartridge are three sets of mounting screws, a screwdriver, a stylus brush, a set of headshell wires, and the user manual. 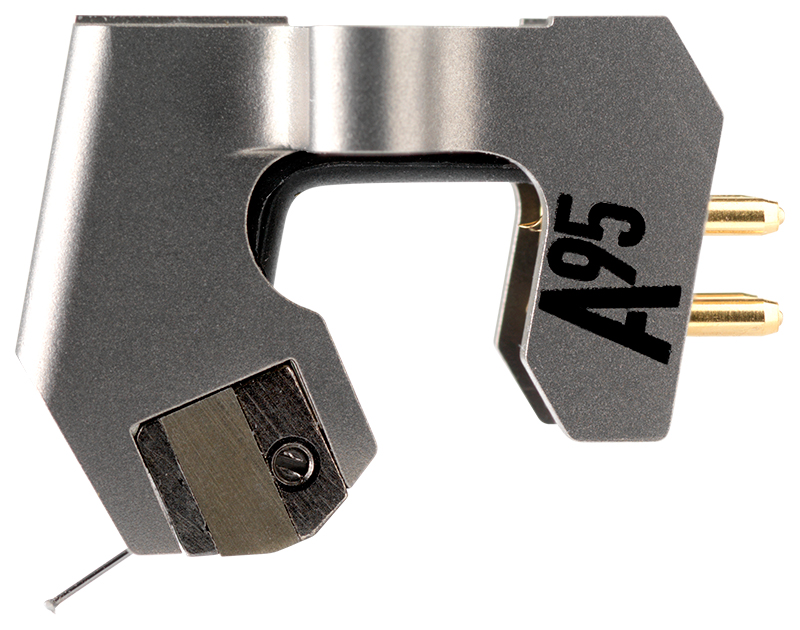 The cartridge uses the Anna’s semi-magnetic armature design to give the A95 more stable reproduction of cantilever movements, which (in concert with the Field Stabilizing Element [FSE] controlling the movement of magnetic fields) produces greater height, depth, and dynamics, according to Ortofon. Further paraphrasing Ortofon’s literature, the Wide Range Damping system is integral to the cartridge’s above-average tracking abilities, low distortion, and resonances; the Replicant 100 diamond is responsible for the A95’s groove-tracing ability. Ortofon also claims that the Aucurum coils of gold-plated, 6Nx oxygen-free copper,  the “zero-loss” transmission of stylus motion to the motor, and its resonance-damping Thermo Plastic Elastomer contribute to the A95’s performance. (Much of this information is available online at Ortofon’s website.) The body of the MC A95 has the shape of the A90 as opposed to that of the Anna, but is made (using the SLM process) of titanium rather than the A90’s stainless steel. The main visual differences at first glance are the “A95” identification tag, the absence of the A90’s three circular holes in the front support for the magnetic assembly, and the new (much better) stylus guard.

The A95 was first set up according to Ortofon’s basic suggestions in the user manual. Ortofon makes a point of stating that there are a host of approaches to cartridge setup, and it encourages users to explore the options available but also states that alignment consideration must be made for azimuth, anti-skating, and VTA/SRA in order to maximize cartridge performance. Following Ortofon’s approach to setting azimuth yielded objectively measured results that exceeded the specifications for channel separation at 27.7dB (left) and 28.0dB (right) with channel balance just above specifications (but still good) at 0.8dB when referenced to 1kHz. Electronically adjusting azimuth improved the measured results for channel separation (and consequently the sound) to 33.6dB (left) and 32.7dB (right) with 0dB of difference in channel balance. A tracking force of 2.25 grams produced the most favorable sound with an SRA set slightly greater than halfway between 91 and 92 degrees in this specific setup. Loading varied depending on the phonostage in use, but in the case of the solid-state units without step-up transformers, a loading north of 100 ohms was sonically ideal.

During the evaluation, the A95 spent all its time mounted in a Basis Vector IV ’arm connected to either a Basis 2800 Vacuum or Debut Vacuum ’table. The phonostages available for the duration of the cartridge review included the Lamm LP2 Deluxe, Ayre P-5xe, Tritschler Precision Audio Devices TPAD 1000, Musical Surroundings Phenomena II+, and a custom-designed modified unit called The Raptor.

One of the questions a current A90 owner would ask first is: Is the A95 is a worthy upgrade if I’m ready to replace an aging cartridge or interested in taking the next step up in performance? This is an easy question to answer. Having listened to both cartridges (the A90 in multiple locations) in the same setup, there is no area in which the A95 isn’t a better performer than the A90. The A95 produces much bigger dynamic swings, and is more at ease while doing so. Where the A90 tended to be less generous with instrumental sustains, the A95 holds each note’s decay longer, giving the entire presentation a richer sound that is similar to (but different than) that of the MC Anna. An excellent example of this difference is observed when playing the title song from Simply Red’s Picture Book LP. With the A90, the sound is well controlled but somewhat overdamped in the bass with a bit less decay on the electronically processed instruments and voice. With the A95 playing the same track, the bass drum feels like the stick is twice as large (if not more that that) resulting in a much more substantially authoritative note that decays longer. Speaking of decay, every instrument’s engineering is now reproduced in such a way that it is heard clearly—even the cymbals’ processed decay, hidden from the A90, is now audible. The third movement from Reference Recordings’ LP of Rachmaninoff’s Symphonic Dances takes this a step further, making the big bass drum sound as though it is being struck by the same double-sized mallet, while also increasing the size of the perceived space around the entire performance three-dimensionally in every direction.

A comparison with MC Anna using the same music led to a much more interesting observation. The biggest surprise, which led to a full day’s worth of installation/reinstallation A/B’s between the A95 and Anna, is the sheer macro-dynamic weight and power the A95 shows compared to the more incisive and controlled Anna. On “Picture Book,” the Anna plays the music with greater grace and poise in direct comparison with the A95. However, the A95 packs more of a wallop in the low registers and seems to continue that trend macro-dynamically up the scale. Mick Hucknall’s voice soars with dynamism on the A95 while being more composed and controlled with the Anna. The bass line and drums are noticeably stronger on the A95, standing out with each guitar note and beat. Unsurprisingly, these same observations held true with the third movement of Rachmaninoff’s Symphonic Dances. The A95 produces a bigger and fuller soundstage that appears dynamically more muscular. The Anna counters with incredible control in the upper midrange on strings and better instrumental separation. In some respects, the A95 plays with more perceived warmth due to its more generous bottom octave and subjectively stronger macro-dynamics—surprising, indeed.

On its own, the A95 has shown itself to be one of Ortofon’s best efforts. While almost, but not quite, as controlled and composed in the upper registers as the MC Anna, the A95 does some things the MC Anna doesn’t, with its perceptively greater dynamic contrasts and power (at least in my observation).

When compared to any other Ortofon cartridge I’ve had experience with, the A95 is ahead in subjective performance by a significant margin. It seems to me as if Ortofon has voiced the A95 to allay any concerns about its tonality veering toward the cool and threadbare. Even so, the A95 seems to stay in the neutral lane with the perceived addition of greater weight and dynamic expressiveness when compared with the A90 (or even the Anna in some regards).

While the A90 was Ortofon’s highest-performance cartridge nearly five years ago, the A95 is much better sounding in every respect. Although it doesn’t outperform it, the A95 nips at the heels of the highest-quality cartridge (the MC Anna) in the manufacturer’s current lineup, and it does so at a more favorable price. For the Ortofon owner, or anyone looking to move into the Ortofon line, the MC A95 deserves serious consideration and a serious audition.