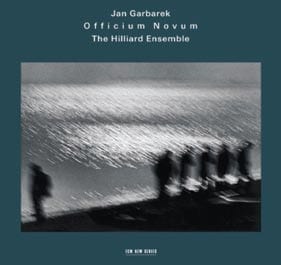 Jan Garbarek and the Hilliard Ensemble have released their third album, after Officium and Mnemosyne, both of which were damned by purists and praised by the more adventurous. The conceit is that the singers perform mostly ancient religious music while Garbarek improvises around them on saxophones. Armenian music is central to this program, and there are also Russian Orthodox hymns, Byzantine chants, Perotin’s “Alleluia, Nativitas,” a Spanish love song, and Christianity’s oldest extra-scriptural hymn, “Phos Hilaron,” (known in English as “Hail, Gladdening Light” and rendered here in Slavonic). The Hilliard Ensemble sings beautifully, and the saxophone adds a Romanian flavor, sounding like a taragot at times. The total effect is often startling, as if you’re hearing music in a church, but the stained glass has been removed and you’re seeing the wildness of the mountains outside. Garbarek’s playing isn’t jazzy— it’s ecstatic at times, but mostly respectful. (The improvisation in the Perotin sounds like “The Irish Washerwoman” in spots, one of the few missteps on the disc.) The singers are positioned better than in their other releases and can be heard more clearly; sonics are warm and airy.