I don’t have a ton of experience with NuPrime, but here’s a quick, high-level history lesson: The company was founded back in 2014 by Jason Lim, the former CEO of NuForce, and it specializes in boutique Class D amps, media streamers, and many other products. I was very excited to get a nearly complete system of its AMG STA power amplifier and AMG PRA preamp. The amp and preamp combination have the same form factor and were clearly designed to work in tandem. While I’m a fan of mixing and matching equipment from a wide range of manufacturers, there’s something special about listening to the products from a single line, and getting a sense of  how they work in tandem.

Diving in, the NuPrime AMG STA ($1695) is a sleek, compact Class D power amplifier with a Class A preamp stage and linear power supply. The chassis is simple, with only a metal switch on the front for power, a small white LED indicator, and the NuPrime logo. My review sample came in dark gray, and looked good in my relatively tight equipment rack.

As power amps go, the AMG STA never gets overly hot—likely a product of its very efficient Class D output module—though it does get somewhat warm. The back is relatively cramped, and it took a little contortion to get everything hooked up, but that didn’t matter much once it was plugged it and powered on. The power amp supplies a solid 130Wpc into 8 ohms in stereo mode and 300Wpc into 8 ohms in mono mode. That’s one of my favorite features of the PRA—its ability to work as either a single stereo amplifier or in tandem with a second STA as part of a monoblock setup. 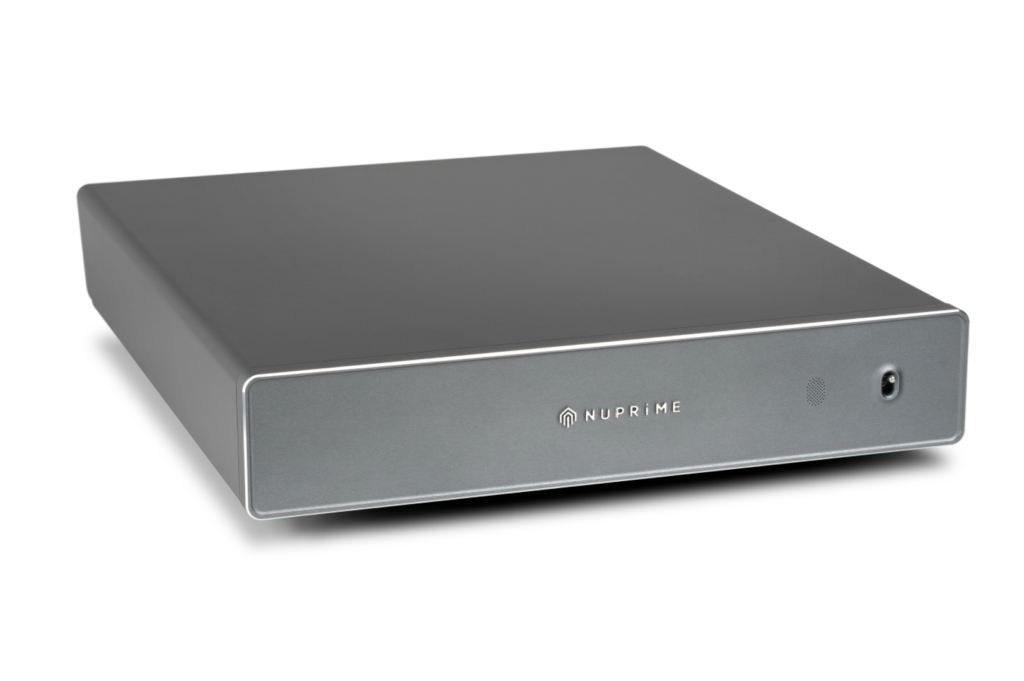 The AMG PRA ($1795) looks almost exactly like the AMG STA power amp—sorry for the vaguely confusing names—but with two knobs and an LED indicator for channel and volume setting on the front panel. The left knob controls the unit’s loudness compensation feature, which is something I’ll talk about in a second. The right knob plays a bigger role—push and hold for standby mode, push briefly to select inputs, and turn to adjust volume. Two toggles on the front switch between high and low gain and between normal and inverted phase. On the back, the PRA includes one set of balanced inputs and three unbalanced RCAs, along with a balanced and unbalanced out. The remote is heavy enough to break a toe if dropped and seems to be milled from solid aluminum; it performed all the functions I could possibly want—from power to volume control to input switching. Overall, the PRA’s design is simple, but attractive and effective.

Before I dive into listening, it’s time to look at the “Active Low Frequency and Harmonic Gain” control feature. To put it very simply, this knob is somewhat like Ye Olde Loudness switch of yore. When turned on it very noticeably boosts bass, without increasing the overall volume. It is an interesting EQ effect, and definitely achieves NuPrime’s stated goal of giving smaller speakers a bit more natural low end. It worked well with my Wharfedale 225s, and actually sounded fairly nice with my Omen Dirty Weekend on its lowest setting. However, through the Polk L600 (review forthcoming), the knob made the bass a little too flabby, which makes sense. (The L600 have a very deep low end, and compensating made the bass a little too intense.) Each setting on the knob is a different EQ curve, and it may be worth experimenting with them to find the one that works best in your setup. For the following review, I kept the knob turned to the left, which turns the feature off.

First up, I plugged in a single AMG STA amplifier with the AMG PRA preamp. (I was sent two STAs by NuPrime, so I did half my listening with one, and half with the dual-mono setup.) The single STA was more than enough to power my Zu Omen Dirty Weekends, and made my copy of the recent Ray Charles vinyl reissue Genius + Soul = Jazz sing and scream and shout. Lows were suitably solid, and the midrange really shone with an extremely pleasant smoothness. I never felt as though the AMG STA lagged behind or ran out of headroom powering the Zu DWs, even on this very dynamic recording. Ray Charles sounded fantastic, and his organ really grooved in tight and exciting lines.

Valerie June: The Moon and Stars: Prescriptions for Dreamers

Let me begin this review with my conclusion: The new […]