I first became curious about Nottingham Analogue Studios (NAS) turntables and tonearms after reading Stephan Harrell’s favorable 2002 review of the NAS Space Deck ’table/arm combo in Issue 138. What appealed to me was Harrell’s description of the Space Deck as an analog playback system that was highly three-dimensional, richly detailed, yet not excessively analytical, sterile, or bright. I enjoy audio products that offer ample resolving power as much as the next fellow, but not if resolution comes at the expense of sound that is persistently brighter than the real thing. Eager to learn more about Nottingham, I began to do background reading and gradually to form a mental picture of Tom Fletcher, the company’s founder and chief designer. Fletcher, as near as I can tell, is roughly equal parts inventor, materials scientist, and audio pragmatist, with a bit of iconoclast thrown in for good measure—a man who, in his own words, wants “music, not hi-fi.” Not surprisingly, Fletcher’s Nottingham turntables and tonearms are models of functional simplicity, yet they incorporate unconventional design touches in subtle but purposeful ways. Two good examples would be Nottingham’s Space 294 turntable and Ace-Space 294 tonearm ($3999 for the pair), which combine elements of simplicity and innovation to serve music in a rare and beautiful way. 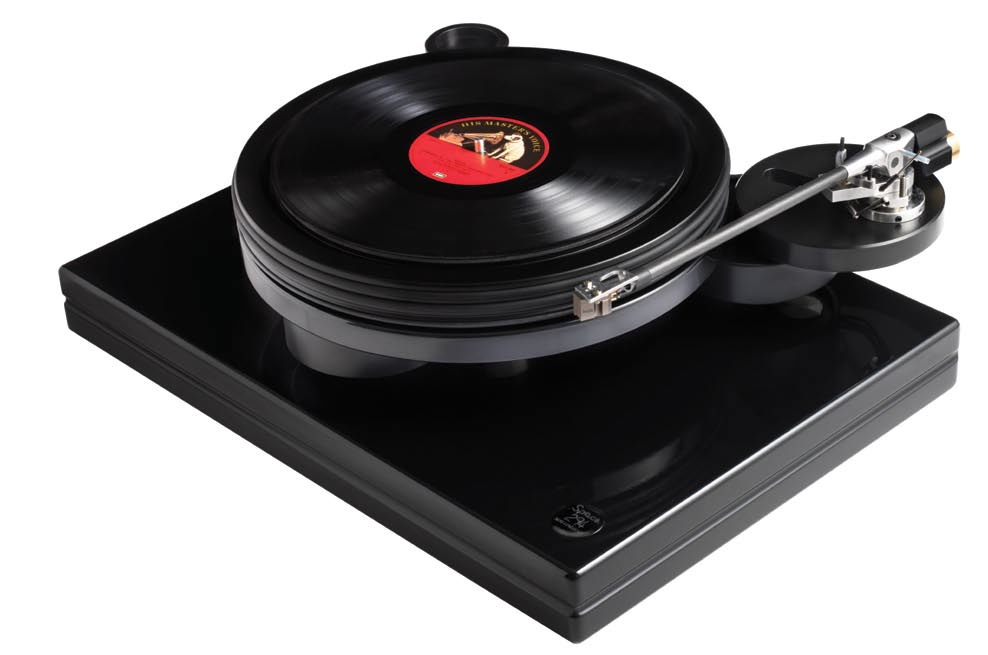 The Space 294 is a large belt-driven turntable designed specifically for use with 12-inch tonearms such as the Ace-Space 294, whose pivot-to-spindle length happens to be 294 millimeters (hence the “294” appellation). Constructed with an eye toward maintaining consistent rotational speed, the Space 294’s features an oversized, 14-inch metal platter that is damped by two large rubber O-rings that fit in grooves on the platter’s rim. During my listening sessions the Space 294 exhibited virtually no audible speed fluctuations—not even on passages that tend to reveal speed instabilities. When I played the “Three Cowboy Songs” medley from Dave Grusin’s Discovered Again [Sheffield Labs], a track whose solo piano sections often expose speed problems, the Nottingham made Grusin’s piano sound as stable as the Rock of Gibraltar. Nottingham’s optional Wave Mechanic outboard power supply might improve speed stability even more, but I think most audiophiles would be well satisfied with the Space 294 in standard form.

To ensure low-noise operation, the Space 294 features a hardened steel spindle that rides within an oil-pumping lead-bronze main bearing. Machining tolerances are so precise that, upon initial installation, the platter/spindle assembly takes several minutes to settle to the bottom of the bearing well. Friction is so low that when I gave the platter a gentle push I found it continued to rotate for more than three minutes before slowing to a stop. To make the most of the Space 294’s main bearing and platter, Fletcher deliberately equips the turntable with an ultralow- torque synchronous motor. Because the motor cannot (and does not attempt to) bring the turntable’s platter up to speed from a dead stop, Nottingham foregoes a traditional on/off switch. Instead, the motor remains plugged in at all times, while the platter must be started and stopped by hand. Why this unorthodox approach? Fletcher believes turntable motors should supply “just enough energy to keep the platter spinning; any motor with enough power to start a heavy platter has too much to properly play records.”

Initially I had misgivings about the Nottingham’s always-on motor and kick-start platter, but once I heard the Space 294 in action I had to concede that it produced quieter backgrounds than any other turntable I’ve had in my home. In fact, the Space 294’s noise floor was so low that it became easy to discern minute variations in levels and textures of tape hiss and record surface noises. The Space 294 reveals that blank grooves on 1970s vintage Columbia discs typically exhibit more grit and grain than those on EMI discs of the same period. Similarly, the Nottingham shows how eerily silent the disc surfaces on Analogue Productions’ 45rpm LPs really are. The point is that the Space 294 is so quiet that it effectively removes itself from the playback equation; all you hear is the record, and nothing but the record.

Complementing the Space 294 is the Ace-Space 294 tonearm, which features a long-grain carbon-fiber arm tube and an underslung counterweight. Unlike most unipivot arms, the Ace-Space 294 does not use eccentric counterweights or side-weights of any kind for azimuth control. Instead, Nottingham says, the arm uses internal “stabilizer bars and tiny ball bearing chases to maintain azimuth,” with the bars and central pivot bearing both coated with a proprietary, highly viscous damping material that “does not flow and does not require ‘settling time’.” The arm also incorporates a so-called “in-line” headshell that features no finger lift and no offset, and is positioned directly in line with the arm tube. As a result the Ace-Space 294 arm exhibits minimal side-to-side rocking motion and requires little if any azimuth adjustment, at least with some cartridges. 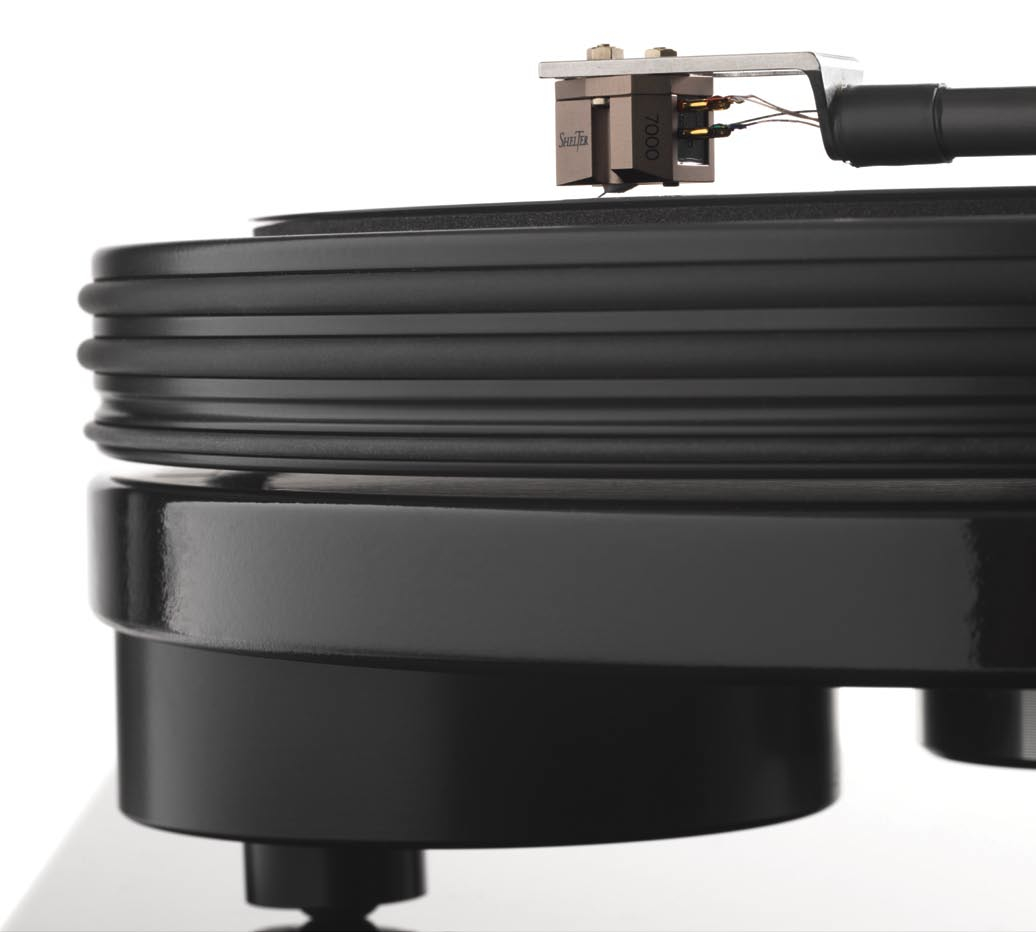 Should azimuth tweaking be required, as was the case with the Shelter 7000 cartridge I used, another surprise awaits. Unlike tonearms whose headshells are made of one piece with the arm tube, the Ace-Space 294 provides a milled aluminum headshell that is coupled to its carbon-fiber arm tube via a tight but hand-adjustable press fitting. To fine-tune azimuth, users grasp the arm tube in one hand and the headshell in the other, then carefully rotate the headshell into the desired position. On paper this might sound somewhat imprecise, but in practice it works like a charm. This arm pays huge sonic dividends for those who take the time to get azimuth and vertical tracking angle properly dialed in. Though it takes a fair amount of trial and error to reach an optimal setup, the good news is that the Ace-Space 294 makes the effects of even minor adjustments easy to assess, so that when you reach the sonic “promised land” you’ll know it. And once that happens, here’s what you can expect.

First, on good recordings, the Nottingham produces soundstages of exceptional depth, width, and overall three-dimensionality— arguably the turntable’s greatest strength. I put on the Von Karajan/ Berlin recording of Stravinsky’s Apollon Musagète [Deutsche Grammophon] and was dumbstruck by the way the ’table captured the sheer size and physical stage presence of the Berlin Philharmonic. The Nottingham let me hear how individual orchestra sections interacted with one another and—especially—with the hall, conveying a sense of the orchestra as a living, breathing organism. This is not one of those polite turntables that presents soundstages in miniature; on the contrary, the aptly named Space 294 sounds appropriately big and full-bodied, always letting you hear and appreciate the acoustics of the recording venue.

Second, the Nottingham produces rock-solid images that are consistently stable and tightly focused. On “Missile Blues” from the Wes Montgomery Trio’s eponymous album [Riverside, Analogue Productions reissue, 45rpm], I was floored by the vivid illusion that Montgomery’s sweet-sounding guitar amp was located only a few feet away and directly across the room from my listening chair. The illusion was further enhanced when, as Montgomery emphasized certain notes and phrases, I was able to hear the acoustic sound of his picking and fingering noises as separate and distinct from the amplified sound of the guitar. A thousand and one small sonic details have to come together in unison to produce images this believable, and the Nottingham captures them effortlessly.

Finally, the Nottingham delivers a carefully balanced combination of resolution and detail on the one hand, and natural warmth on the other. Tom Fletcher is on record as saying that “our (Nottingham’s) turntables are generally on the warm side of neutral,” though I think his statement is somewhat misleading. If we use the sound of live music as our standard, then I would argue the Space 294/Ace-Space 294 sound is truly neutral, where many “definition-driven” products sound colder, brighter, and more clinical than the real thing. Let me provide a concrete example to illustrate the point. As I write this paragraph, I am listening to the Michael Tilson Thomas/Boston recording of Debussy’s Images pour Orchestre [Deutsche Grammophon]. Many analog systems capture the basic beauty of this recording yet impart a cold, steely quality over the top of the strings, which spoils the effect I believe Debussy was after. But the Notthingham is different; though very detailed in its overall presentation, it nails the rich, almost buttery-smooth quality of the Boston strings in a way that brings the entire composition alive and lets it sing.