Located directly across the street from the John Wayne Airport, the Newport Audio show would have done the Duke proud. Spirits were high, old hands abounded, and a few greenhorns showed up to sample the latest and greatest in audio way out West. By evening most attendees were tuckered out and restoring their spirits in the lobby of either the Hilton or Atrium hotels, both of which also abounded with purveyors of vinyl. Listen closely enough and you might even have heard a few show visitors humming a few bars from Sonny Rollins’ tune “I’m Just An Old Cowhand.” As for me, I got to play the role of the searcher.

The most amazing thing about the show this year wasn’t the sound—which ranged from middling to very good—but the ubiquity of the LP. The CD looks to be heading the way of the Dodo bird. TAS editor Robert Harley had asked me to cover both digital and vinyl, but it was the latter that, by and large, dominated. In almost every room, it seemed that a ‘table was present, whether a rehabbed direct drive Denon or a new take on vinyl reproduction. There was also a ton of vinyl for sale from the likes of Analogue Production’s Chad Kassem as well as a number of purveyors of vintage vinyl in the Atrium Hotel, including one hawking an original pressing of Miles Davis’ Kind of Blue for $200. In addition, Ron Rambach, the head of Music Matters, which is releasing gorgeous editions of Blue Note LPs on 45 rpm, regaled all and sundry with tales about chasing after rare vinyl. 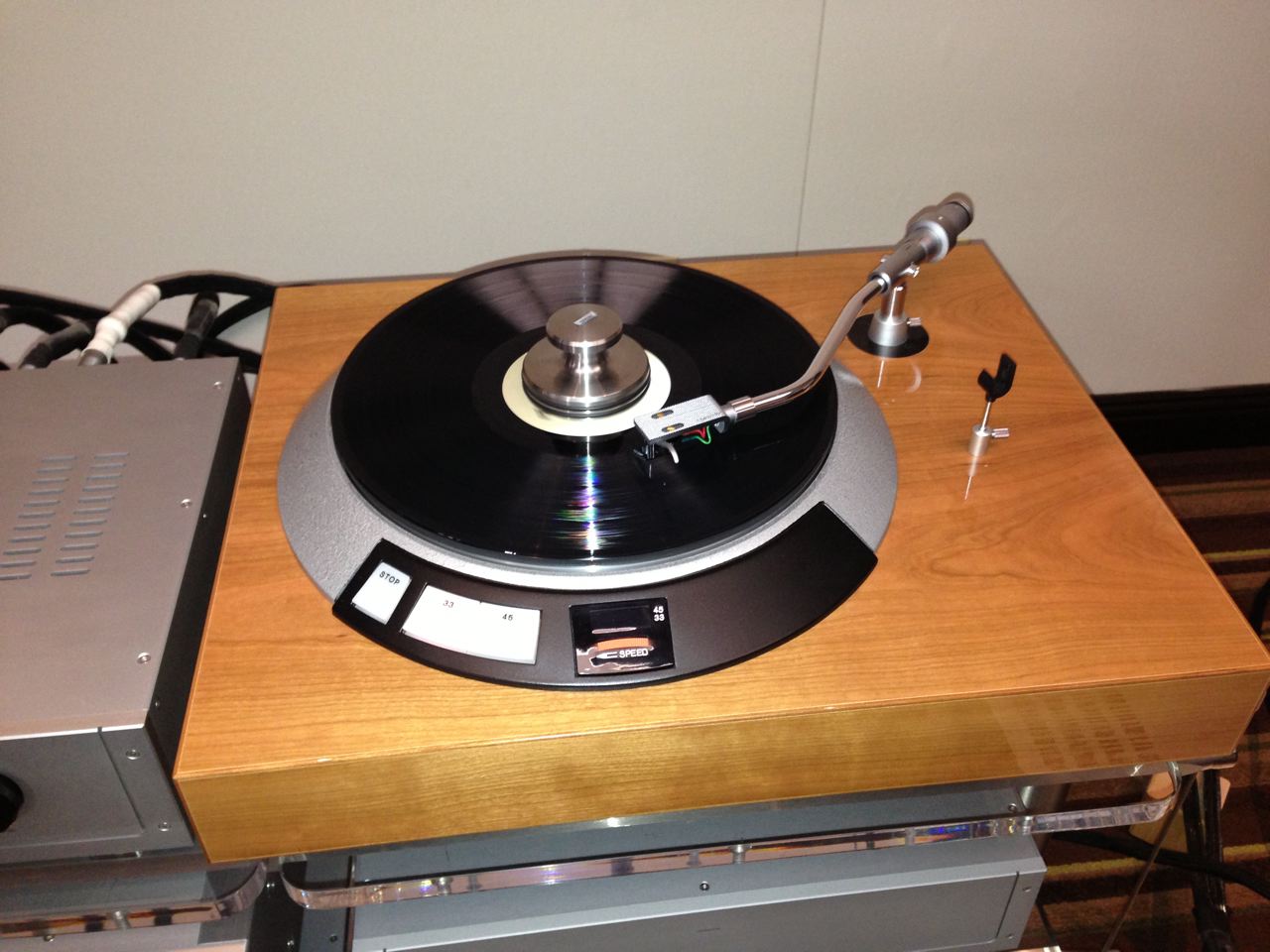 Does this mean that vinyl was always superior to digital? Nope. In Brian Berdan’s Audio Element room, which featured the $18,000 VTL MB-450 Series III Signature amplifiers, a VTL TL-7.5 Reference linestage, and VTL TP 6.5 Signature phono stage, the $36,000 Sonus Faber Amati Futura loudspeakers, the $110,000 dCS Vivaldi digital playback system, and the Grand Prix Audio turntable, I was distinctly more impressed by the digital sound than vinyl. I immediately recognized all the characteristics of the Vivaldi, which I’m using at home. The Vivaldi was simply smoother in the treble region and fuller than the Grand Prix, and not by a small margin, either.  The Sonus Faber speakers do not deliver the last word in resolution, but they sounded smooth and engaging. The VTL tube amplifiers are a steal at the price and supplied a wonderfully open and airy midrange, which Los Angeles audiophiles will shortly be able to sample when Berdan’s new store Audio Element opens this summer in Pasadena.

Close by was the $12,600 Magico S1 loudspeaker, which sounded splendid with the Constellation Performance series—engrossing and organic. It was a pleasure to listen to such refined sound. With Magico, it really was a tale of two speakers. The Q7, the company’s flagship situated downstairs in a large and square room, could hardly have looked more imposing, flanked as it was by various VAC amplifiers and a bevy of Synergistic Research products. Synergistic Research’s lead designer Ted Denney III always puts on a wonderfully evocative and compelling presentation of his wares. The actual sound, though, never really captured me, which I attribute to a room that was quite problematic. The sound was big and pristine, but I could have done with a little more harmonic refulgence.

An even more vast room was located in the Atrium where Dynaudio was demoing the new $85,000 Evidence Platinum loudspeaker, which I will be reviewing soon. Once again, the presentation was underwhelming, mostly, I suspect, because of the cavernous acoustics. “Lullaby” sung by Leonard Cohen sounded big and powerful, but also diffuse. Or maybe I should plead guilty simply to playing the track too loud, prompted by the size of the room. Nor did the Wilson Alexia coupled with Audio Research equipment truly grab me, at least when coupled with the Audio Research Reference DAC—the treble was way too acerbic for me, which I know, from using the Wilson XLF, is not the characteristic of the marvelous new silk-dome tweeter that the Alexia sports. So far, I have not been able to cotton to ARC’s digital efforts. 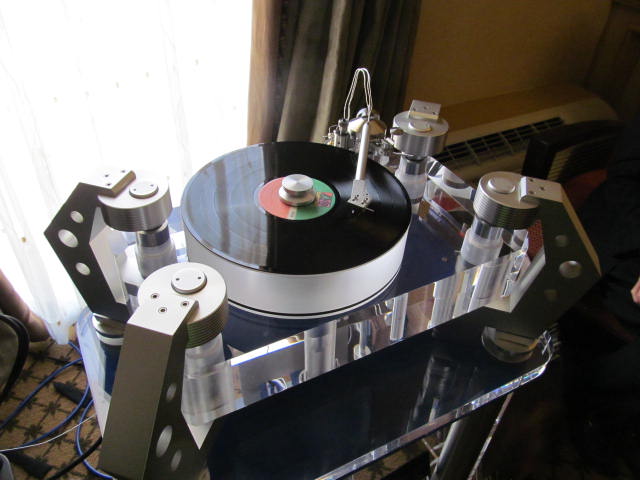 Initially, I was also puzzled by another big system staged by Santa Monica’s Optimal Enchantment–the combination of the megabuck Basis Work of Art turntable, the new Audio Research Ref 10 preamp, and the Vandersteen 7 loudspeaker. But when I returned on Saturday to listen, the sound was, in fact, enchanting—dynamic, fast, and articulate. Word is that new output tubes were inserted into the Audio Research 250 amps on Friday and needed some time to hit their stride, which they apparently did. I wasn’t the only person in the room listening intently on Saturday. A.J. Conti has clearly hit a home run with his new $14,000 Basis Superarm 9. Conti may groan, but I can’t help wondering what his ‘table would sound like if he substituted a heavier metal for his acrylic platter. It was also clear Audio Research has much improved the performance of its preamp from the 40th Reference Anniversary, which lacks the snap and speed of its two-box successor.

Overall, it was the smaller systems that really caught my attention. Bluntly put, there’s less to go wrong. From the outset, Garth Leerer, the president of Musical Surroundings, got it right with his combination of the wonderful $17,000 AMG turntable (which was outfitted with the $15,000 Clearaudio Goldfinger Statement cartridge), the $10,000 Aesthetix Janus preamp, and the $27,900 Wilson Sasha loudspeakers. There was something tight and captivating about his system, particularly on the excellent jazz cuts he was spinning. There was also a noticeable lack of bass bloat that afflicted many other rooms. The drums were simply immaculate and the power and precise soundstaging of the Sasha was showcased at its best. Another room that had excellent playback featured the Triangle Arts turntables along with some sensational NAT equipment. Meanwhile VIV lab was offering a new tonearm called the Ha, which boasts a “rigid float.” 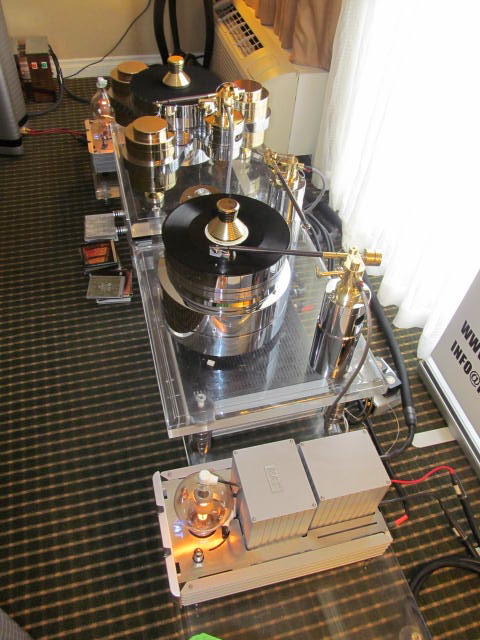 Another small system that caught my eye (and ear) was Jonathan Tinn’s Playback Designs IPS-3—Integrated Playback System 3, which was introduced as a “World Premiere” at Newport. Advertising folderol aside, the thing rocked when playing through the $4,300 MMMicroOne loudspeakers. The IPS-3 is an all-in one unit, consisting of a 130 watt amplifier, preamp, and DAC in one box and retails for a cool $13,000. If you’re looking for an elegant and unobtrusive stereo package, this may be it. Fine sound, too.

Another fairly thrifty system came courtesy of the indefatigable Walter Liederman of Underwood HiFi, who demoed his CS2.3 Emerald Physics Mk2 loudspeaker. He was using a PS Audio Perfect Wave DAC MK2 plus DSPeaker for room correction—the whole shebang costs $12,990. It wasn’t quite as dynamic as Walter suggested it would be. Sorry, Walter! But I will tell you one thing: that system mated perfectly with a small room—a tidy sound with zero bass overhang and bloat, which counts for a lot. There is something to be said for room correction when it’s done correctly, or so this nifty system began to convince yours truly.

Another piece of gear that was rather eye-catching is B.M.C.’s new PureDac which retails for $1600. Brian Ackerman of AAudio Imports seems to have an infallible eye for discovering handsome equipment from Germany that he imports to the states. BMC, which has just hired Paul Bolin as its representative, appears to be making an aggressive move in the mid-priced market. Another sweet product is the Lynx Hilo reference D/A converter, which offers multiple analog outputs and digital options. It looks like an amazingly versatile product and includes an LCD touch screen and front panel. I also got to admire but not hear the Zodiac Platinum DSD DAC, which it says offers “widest DSD support” and up to 768 kHz sampling rate via a custom USB chip.

So what really grabbed me most at the show? Well, the biggest shocker was the KEF room, where the $1500 LS50 was delivering a real wallop from its 5.25 driver”. I suppose expectations are always lower and easier to exceed when the product isn’t too expensive. Nevertheless, I was most favorably impressed by the LS50’s performance even if it didn’t quite boast the fidelity of some of the bigger systems. What it did for the money was hands down the most shocking experience of the show. Perfect for small room and guaranteed to leave anyone who hears them slackjawed. Rule Britannia! Also quite exhilarating was MBL’s room, featuring Sergeant Pepper’s on tape, which produced a wide-open sound in the treble plus a few vocal inflections that I simply have not heard before.

But when it comes to best sound, it would have to go to Garth Leerer and the Wilson Sashas. Not the biggest soundstage. Not the loudest presentation. But there was true grit in Leerer’s room, which offered the most musical and coherent presentation I heard at Newport. The AMG ‘table is clearly a killer and the Jim White’s Atlas amps drove the snot out of the Sashas. My interest in Leerer’s setup, you could say, never waned. 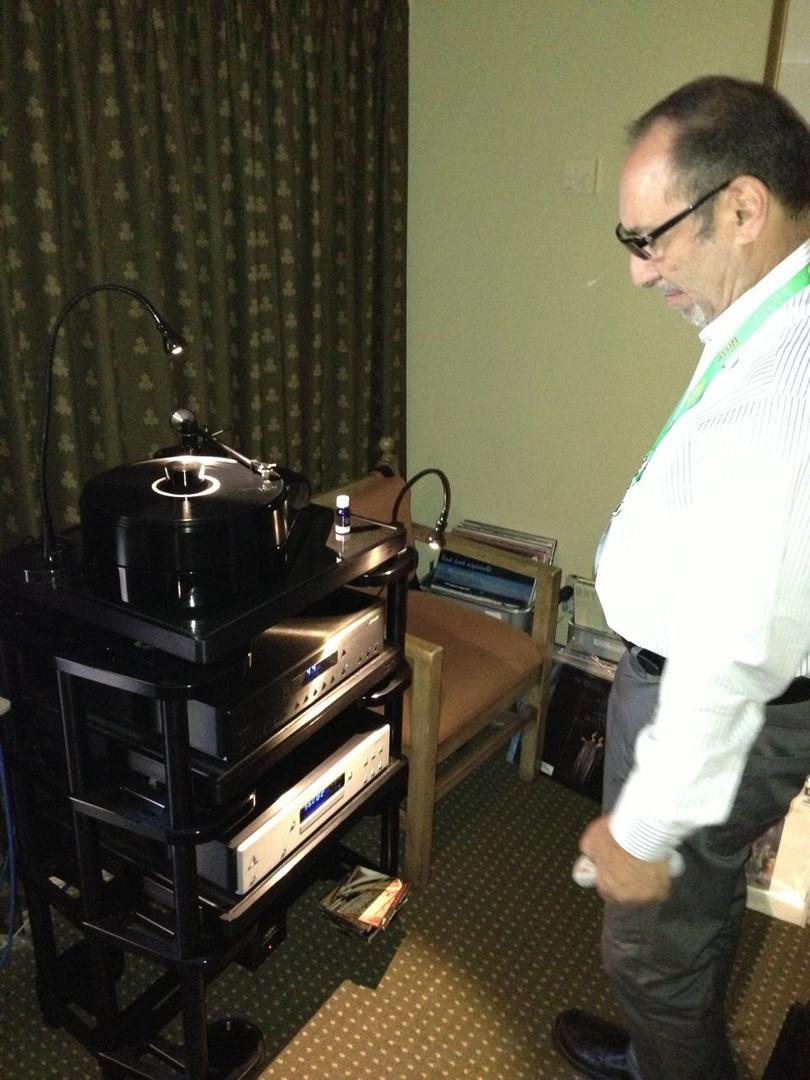