New Interconnects and Cables from Cardas, MIT, and Wireworld

Earlier this year I reviewed Dynaudio’s XEO 5 wireless speaker system, which wasn’t truly wireless. While it was true that speaker cables were relieved of their duties, plenty of work was still found for AC cords, line-level interconnects, and coaxial and USB cables, which makes me doubt whether such “wireless” designs will ever be seen as a threat by the wire-makers of the world. Wire and electronics go together almost inseparably; yes, it’s possible to make one that operates without the other, but it is relatively difficult to do. Wires, or more specifically the conductors inside wire, do a splendidly efficient job at two things that make electronics go: transmitting power and isolating small-scale signals. But conductors, any conductors—because none can completely remove itself from the process of transmitting an electrical signal—can’t help but impart a signature of their own, as subtle as that may be. Thus, paradoxically, the best cable firms are also working hard to make the wires between components “disappear.” Three of these firms are here under the spotlight in this survey of their latest mid-line interconnects and speaker cables.

Rightly or not, I took as gospel that it was the goal of cable designers is to eliminate any character imparted to the audio signal by the device itself. I also assumed that the more there was of the device, the easier it would be to discern this character.

So I asked for three meters of interconnect—which wouldn’t be out place in order to more conveniently place a preamplifier near the listener—and another three meters or thereabouts of speaker cable. Although none of the interconnects tested was marketed as such, I also tried each connected to a moving-magnet input of my Parasound Z phono USB preamp, leaving the other end disconnected, as a check for shielding against hum and noise.

To preserve my sanity (and yours) and because most people I suspect would buy wire by the label, I chose not to report on the results of mixed-brand listening, although I did give it a try. My conclusion? Differences among the interconnect cables out-weighed those among speaker cables. Finally, and again in the interest of my own sanity, I limited the music material to three recordings: 96/24 hi-res renditions of Ella and Louis [Verve] and the Grateful Dead’s American Beauty [Warner Bros.], and Glenn Gould’s 1981 performance of Bach’s Goldberg Variations on State of Wonder [Sony], ripped to my computer and upsampled to 96kHz.

There are two things to like about these Cardas cables even before you connect them up. The first is that they are proudly (any other adverb possible?) designed and made in the U.S.A.

The second is packaging, which is about as low-key and at the same time environmentally agreeable as you can get: a zip lock plastic bag and two-pieces-of-paper-worth of product info. I put the paper in the recycling bin and used the bags for sandwiches. Ok, maybe a brown paper bag would beat this, but really! All perfectly adequate to the purpose, and neither adds nor detracts from the inherent quality of the product itself. And, I think, a classy choice.

For the uninitiated, Cardas Audio is built on the philosophy of the supremacy of the “golden ratio” otherwise known simply as the irrational number 1.618 (in short form). It has been argued that this ratio accounts for the most pleasing aesthetics in art, architecture, and the human form. It is also suggested that it explains the growth patterns of some animals, including the nautilus shell, a cross-section of which is the corporate symbol of Cardas. I suppose George Cardas reasoned that if the golden ratio was good enough for art and nature, it should work a treat in cable-conductor geometry.

At $692 for a meter pair, the Clear Light is Cardas’ second priciest interconnect, but it’s still a huge step below the top-of-the-line Clear’s $1840 price tag, while the Clear Sky speaker cable, at $900 for a three-meter terminated pair, is fourth out of nine in the Cardas pecking order (the top-range Clear Beyond is priced at a cool $9884).

Aside from the packaging, the fat blue cables are suitably physically impressive, and yet the soft rubber casings made them very flexible and easy to dress.

Except for the Wireworld Equinox 7 speaker cables, the Cardas wires were the chunkiest I’ve ever used in my system, and I can’t help to think that the visual image I have of these cables might have affected my aural observations (if true, then blind-listening tests may indeed have a purpose). So is my mind equating big and fat cables with big, fat, round, bassy sound? I may never know, but I heard good detail along with a slight fullness to the upright and electric basses. This warmth invited me when listening to Ella and Louis to focus a bit more than normal on Ray Brown’s bass playing, which is really not a terrible thing, although the record’s presentation now became that of three headliners rather than two. However, Phil Lesh’s electric bass on “Box of Rain” was at the boundary of being a little too full, and with it suffering a wee loss of control and definition, although not unlike an experience I had listening to them live in New York’s Madison Square Garden back in the early eighties.

Mind you, this was a relatively small magnitude effect which could easily have been the result of a system mismatch with my Snells and could be welcome in other setups. Hum rejection was quite good although somewhat less so than the Wireworld cable, which was almost inaudible. 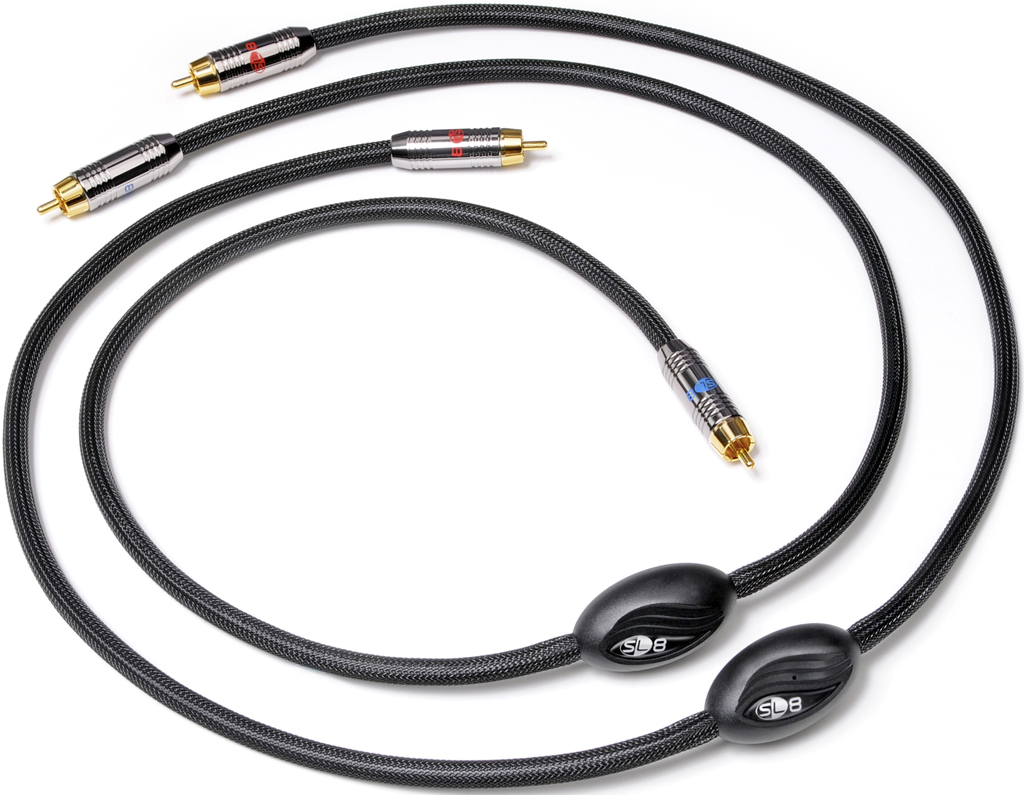 I always equated MIT (Music Interface Technologies) audio cables with crazy-unreachable prices even if you do get a set of magic boxes along with the wire. Try $17,000 for the Oracle MA-X Rev. 2 Proline Balanced (1 meter) or $53,500 for eight feet of Oracle MA-X Super HD Bi-Wire speaker cable, and you see what I mean.

But that’s only the very top end of a quite large range in cable pricing. Towards the other end is the new StyleLine series, which starts at $200 per meter pair for the SL 3 interconnects and $500 for an eight-foot pair of SL 5 speaker interfaces (MIT speak for cables). I reviewed the slightly more expensive SL 8 ($499) interconnect and SL 9 ($799) interface. This line also encompasses HDMI, digital coaxial, TosLink, and USB cables, as well as power cords.

I’m not going to go too deeply into this as I hardly understand it myself, except that superficially the numbers (3, 5, 8, 9, and so on) stand for the number of “poles of articulation,” of which (you guessed it) the more the better. The company’s high is 159 poles, so you see I’m really slumming. According to MIT a pole is an optimized range of frequencies at which a cable most efficiently stores and transports energy and therefore is the region where it has best articulation. These poles are relatively narrow, so the more you can get in and distribute evenly across the audible range, the higher the articulation achieved.

Whatever is going on in MIT cables, the results sounded pretty positive to these ears. The SL 8 did have the poorest rejection of 60Hz hum and noise, but when it was used as intended I heard a very neutral top-to-bottom balance. Bass was certainly present, but it didn’t overwhelm everything else. On the other hand, I was able to bask in the detail-fest that makes the sport of high-end audio so much fun: mouth sounds, the signatures of the microphones, the “sound” of the recording studio, the bite on brass that makes me fear for what Pop’s chops must have been going through on Armstrong’s solo breaks on “Isn’t it a Lovely Day.” How about the sound of the action on Glenn Gould’s piano? Clear as day. Magic boxes? Poles of articulation? Just like my late-model computer-controlled car, it’s beyond me how it works, but I do like what it does.

The Equinox is right smack in the middle of Wireworld’s extensive new Series 7 line of interconnect and speaker cable, which also encompasses HDMI, USB, coax/TosLink, and power cables. Priced at $200/meter pair (interconnect) and $870/3 meter pair (speaker cable), Equinox appears to be good value in a range that tops out at $3000 and $24,400 respectively. 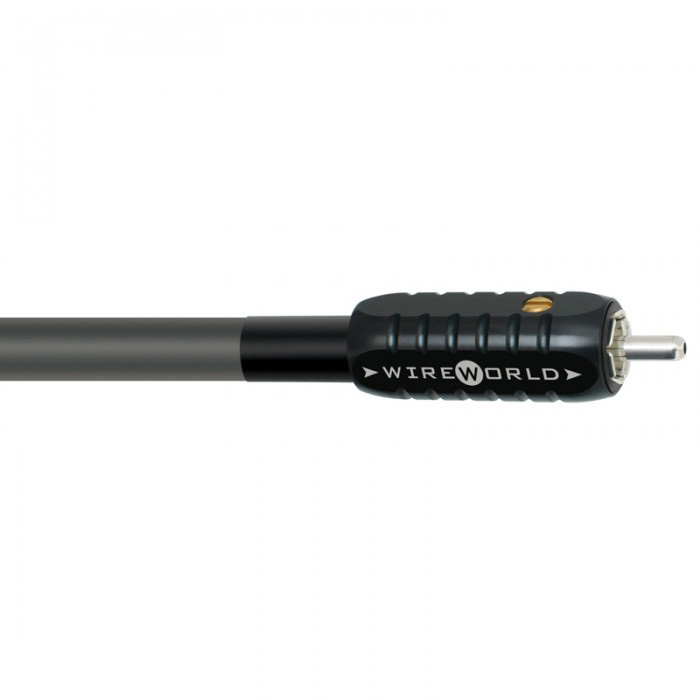 Unlike MIT cables, there are no “magic boxes” to be found; instead, the Equinox is all about good quality materials and geometry. The conductors are of Ohno continuous-cast copper, and these are arranged to minimize inductance effects in what the company calls its DNA Helix configuration. Wireworld claims a side benefit of this is superior immunity to EMI and RFI noise. Indeed, the 7 interconnect displayed the best hum and noise rejection of the cables in this review.

The Equinox 7 interconnect is a particularly good value, being possessed of a pleasingly rounded and warm presentation not unlike the Cardas Clear Light but for less than one-third the price. The tremendously bulky and stiff Equinox 7 speaker cable was also very similar to the Cardas Clear Sky in sonics, but in this case the prices were similar as well. While the Equinox was easy and never fatiguing to listen to, the added warmth was not what my system needed. But in a hi-fi that’s a bit tilted forward towards the right of the frequency continuum, the Equinox 7 may be very welcome indeed.

Like choosing among mid-priced sedans from Honda, Nissan, or Toyota, it will be hard to go wrong with any of the cables reviewed here. This is really no surprise as Cardas, MIT, and Wireworld are “blue chip” companies that have been in this business for quite some time, and they know what they are doing. Yet there are sufficient differences in the sonic personalities of these components that I highly recommend a trial listen before committing to a purchase.