Some of the best sound was reserved for the very nicely dialed-in Genesis room (above) which featured the stunning 2.2 Junior loudspeakers, a towering, line source dipole with servo –controlled powered woofers ($85k), all Genesis electronics, Absolute Fidelity racks and wiring. And spinning the vinyl was the debut of the Vertere Acoustics SG-1 turntable. The design of Touraj Moghaddam Vertere’s CEO and founder (and formerly of Roksan) the SG-1 is a transparent Lucite construction comprised of three main upright pillars with a fixed top plinth that suspends a sub-platter via elastic bands, not unlike the uprights in current SME designs. The arm and platter are additionally isolated from the plinth on its own sub chassis, the motor independent as well. There are two models and various upgrades availabre that can lift the price appreciably higher. The configuration here was SG-1 Standard Record Player + SG-1 Motor Drive w/Pulse-R cable + SG-1 Tonarm with Handbuilt wiring $ 29,795. Playing freshly minted vinyl , and original master tapes by recording artist Lyn Stanley, (who also entertained the crowd with recording studio anecdotes) the sound from this collection of 1950’s standards was rich, mellow, and composed. The sonics were also resolutely sensitive to the finely shaded vocal dynamics of the Julie London-esque stylings of the talented Ms. Stanley. 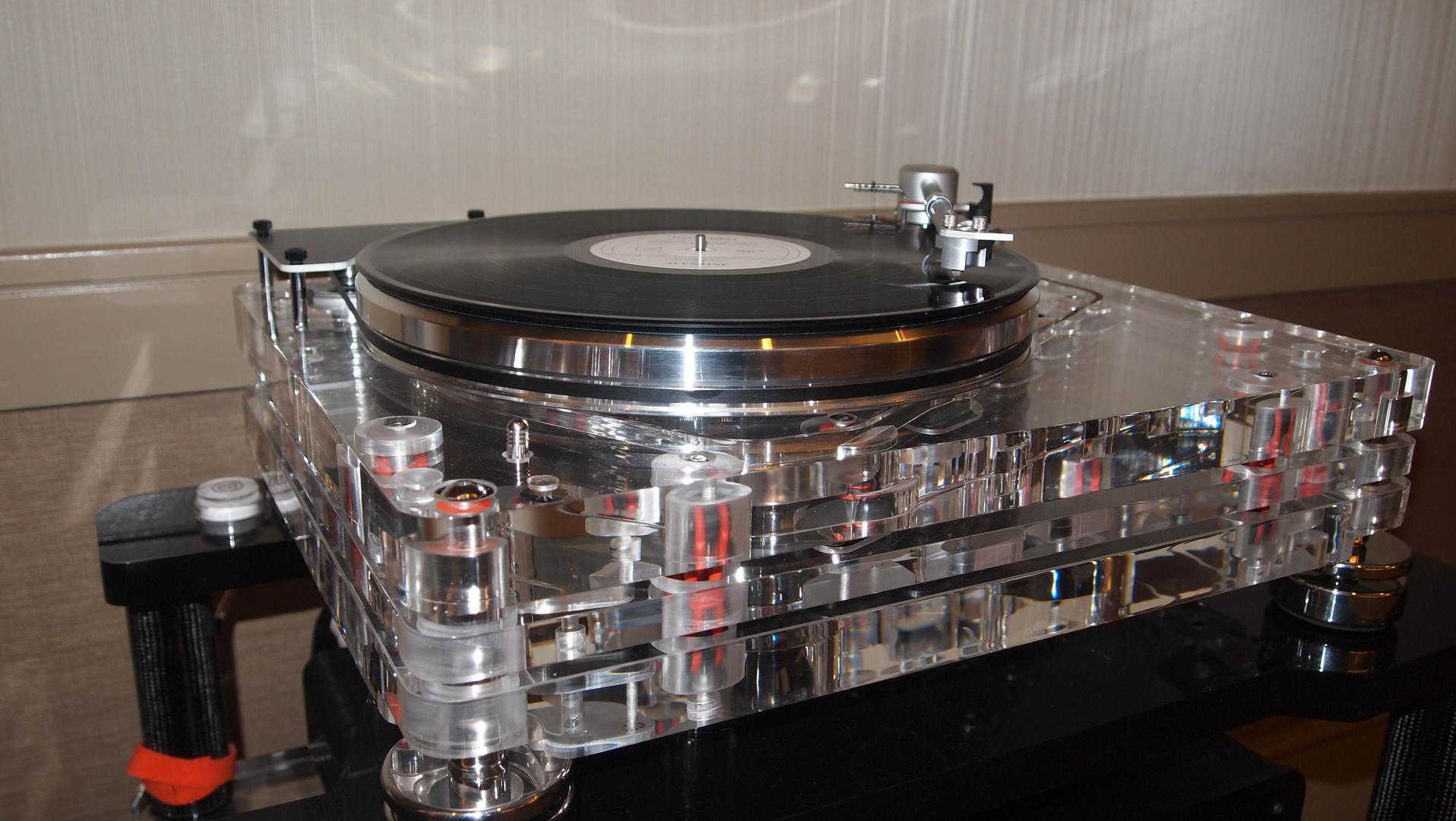 Sound Lab, normally the rarest of sightings at audio shows demonstrated the mighty eight foot plus ( or was it closer to nine?!) Majestic ($40,570). Although the room could barely contain the formidably tall ‘stats, when the levels were kept in check (and didn’t overly pressurize the room) the sound became airy, fast, voluminous with a marvelous image of Sammy Davis, Jr and guitarist Laurindo Almeida from the DCC remastering of the 1966 duet album. Constrained by room size I would have loved to have heard these in a larger environment where the panels could really spread their wings but it was still a thrill to experience them in the flesh. 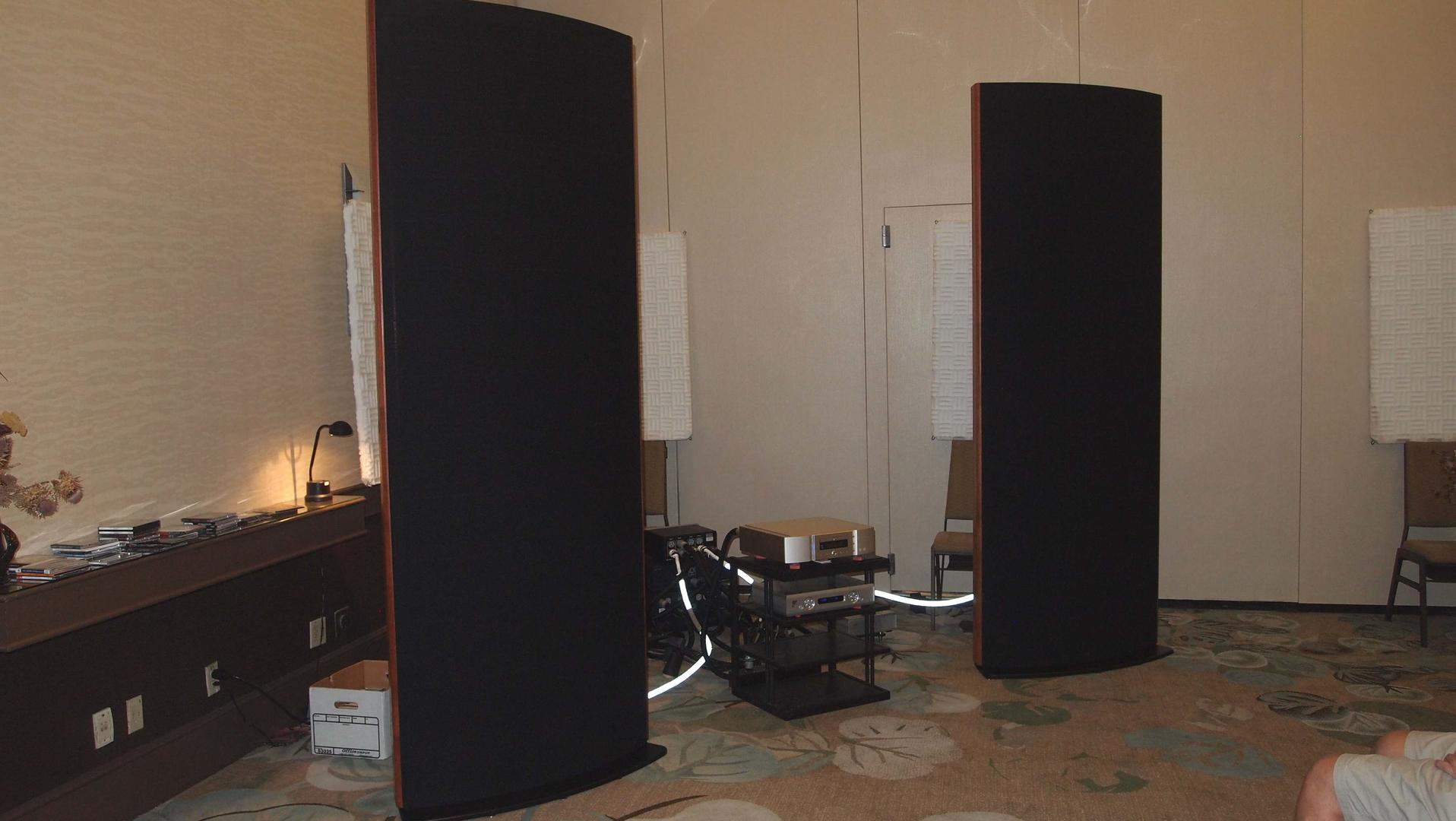 The Spatial Audio  Hologram M1 Turbo edition (seen below-with upgraded circuit components and WBT NextGen terminations) an open baffle speaker ($4000) was paired with Audion tubed-electonics, Revelation Audio Labs Cryo-Silver wires and Isotek conditioning for some of the best sound in the show. Its performance was box-less as you would expect, but also fast and composed. It reproduced the ambient field of a performance and possessed an immersive character that is unique to the open baffle segment 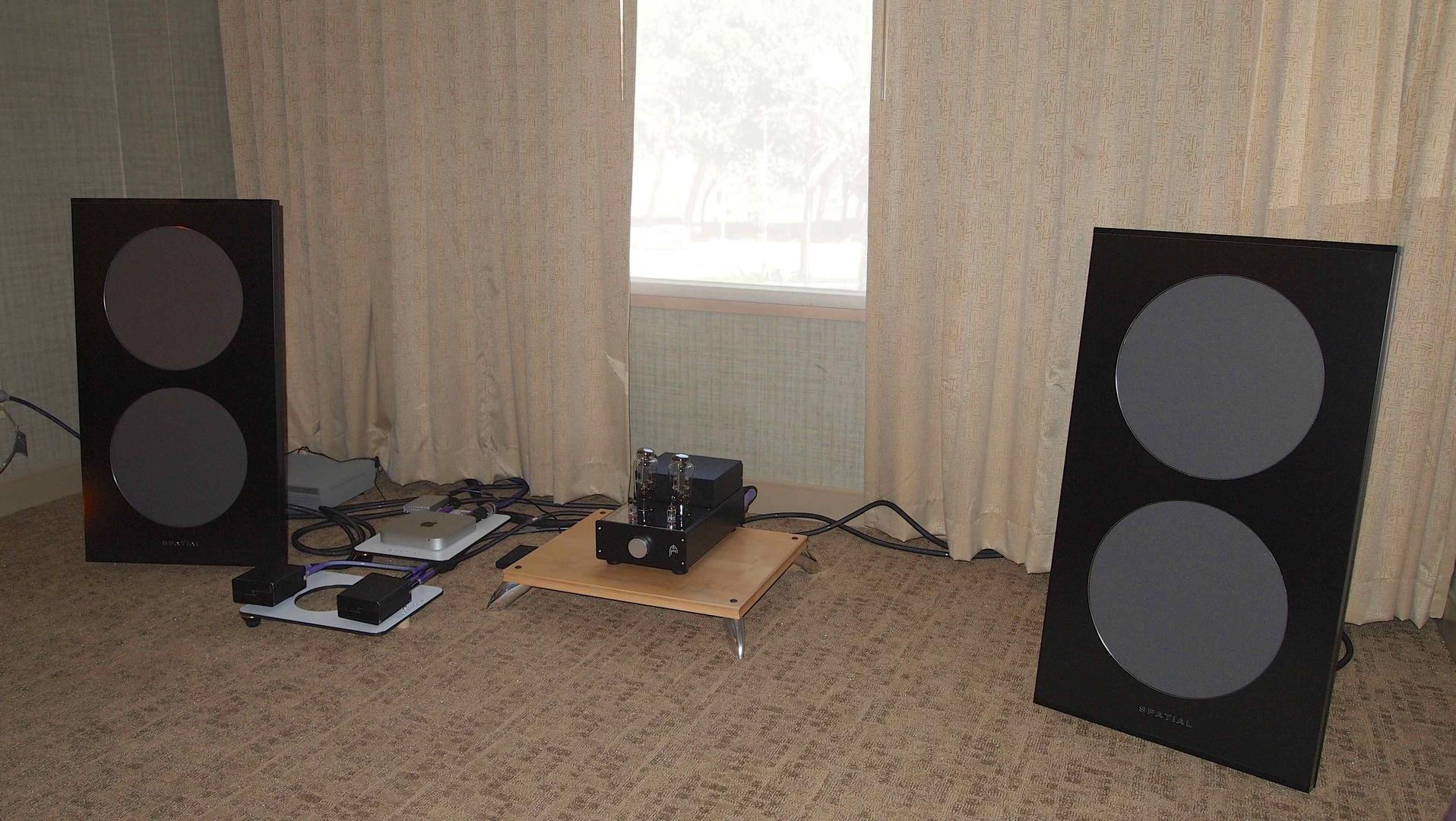 Bluetooth was clearly on the minds of many at CAS. Wyred4sound (exhibiting with Audion and MartinLogan) for example announced bLink, a device that offers a Bluetooth stream from any wireless device with an 96kHz ouput sampling frequency, with digital inputs that support up to 24/192 and a Femto-grade reclocker to reduce jitter. This baby will be shipping soon for $499. This was also the second exhibit (Soundscape AV, the other one) that I was afforded an opportunity to experience the ML Motion  loudspeakers, this time the Motion 15 for $799/pr. And once again it revealed itself superb small monitor–dynamic, clean, with excellent extension at both ends of the frequency spectrum. 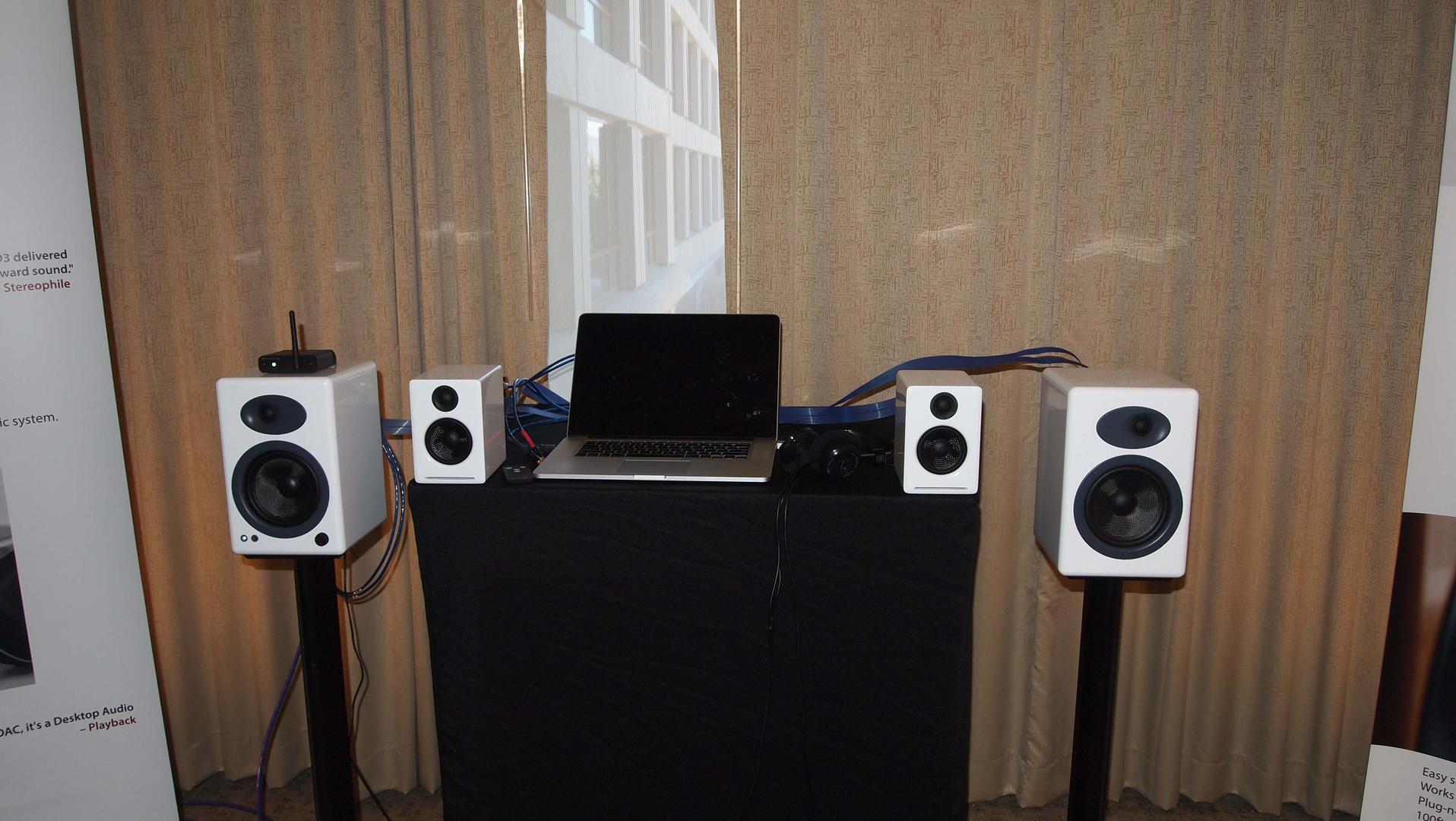 Enter the Audioengine room (above) and there’s always a bustle of multigenerational activity. The differnence is that typical 40-somethings are asking for information, while under 30s understand the tech without explanation. In any case, the tech-saavy and price-friendly brand appeals to the desktop and headphone set like few others. What caught my eye this time was the B1, a Bluetooth Music Reciever, with aptX and s 24-bit upsampling DAC stream from a smartphone, computer or tablet. Tiny in the extreme as was the price at $199. However you look at it, atop the speaker on the far left,  it appears to be another winner. And I’d say that even if I didn’t get a free T-shirt. 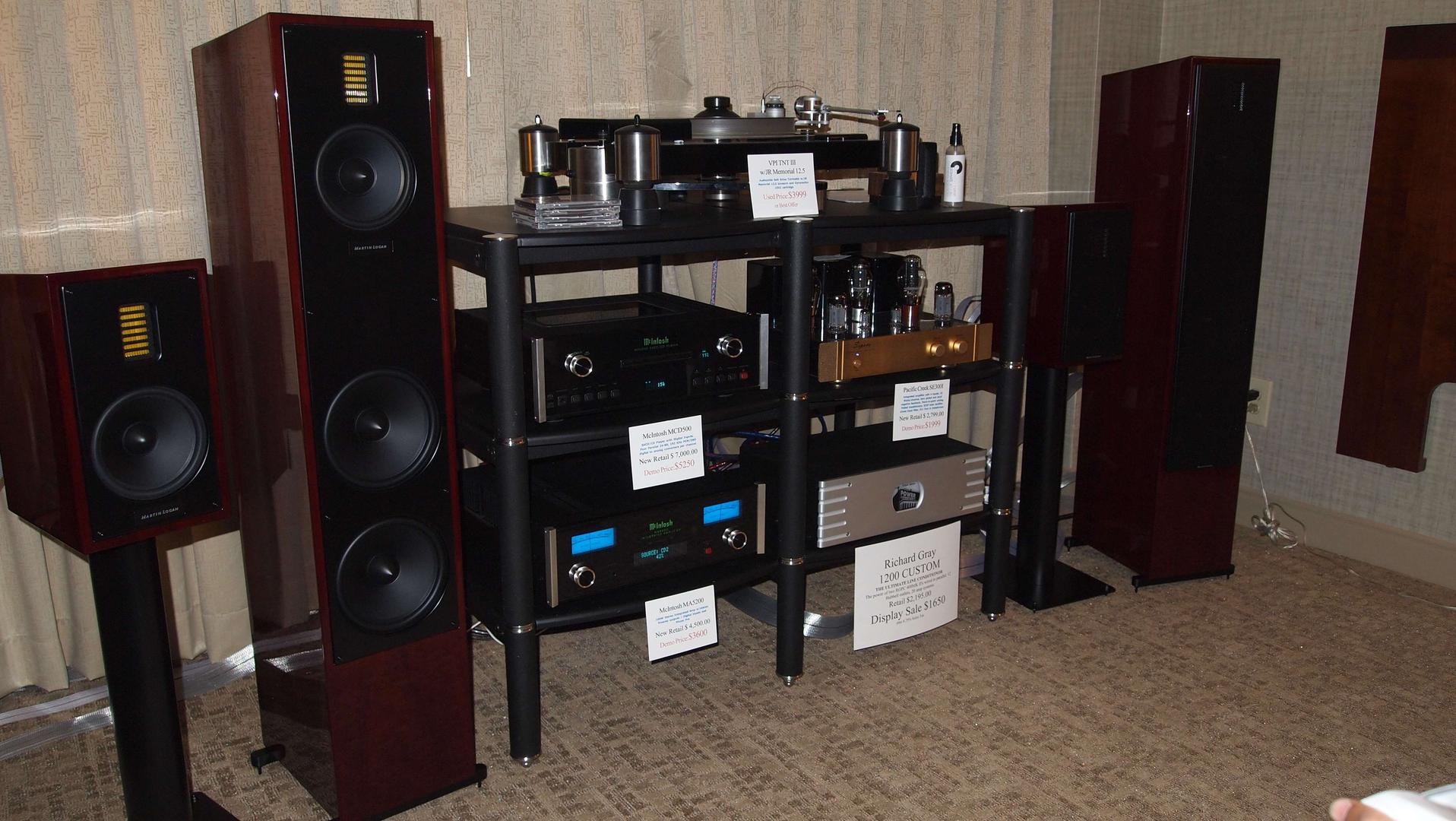 Soundscape AV of Santa Rosa demoed a pair of terrific and affordable MartinLogan Motion Series speakers, the Motion 35XT–a two way compact $1200/pr– and the Motion 60XT floorstander –$3000/pr. Both use ML’s folded motion XT tweeter that boasts a 40% larger radiating area than its predessor.  This real world and price-approachable system was joined to McIntosh gear, the MA5200 integrated and MCD500 SACD/CD player while connections were courtesy of Nordost.  Fearlessly cueing up the Taiko drummers the sound was coherent, with superb image stability, and an all-of-one piece transparency. Ditto for it’s floor standing big brother-similar midrange voicing but with a wider dynamic window and greater LF extension.

Kathleen Grace: No Place to Fall