Filling a cavernous ballroom ain’t easy but  Perfect 8 pulled it off with reasonable aplomb.  It’s The Force line source (est. $350K), a  provocative and evocative speaker/subwoofer combination combined both eye and ear popping translucency like no other mega-scale system at the show. Paired with BaLabo electronics, a gorgeous Bergmann Sleipner turntable, this system is scary in its transparency and orchestral scale dynamics. Not as fully developed in the low bass as was the quad subwoofer setup at this year’s CES but impressive notwithstanding. Yet it’s also eerie in its delicacy with voices and single instruments becoming almost tender. With its thick glass enclosures exposing the exquisite internals, this is an exhibitionist’s dream system. Still I’d like an opportunity to hear it in more normal surroundings-hopefully soon.

An example of how experience prevails in terms of dialing in the room setup was the Zesto Electronics room (phono stage/preamp/amp in concert with the Merrill-Williams Audio turntable TAD Evolution One loudspeakers and Wywires Platinum cabling. This team knows it’s system and how crucial room integration can be at these shows.  Fact is,  I had just heard the high rez digital file of Eva Cassidy’s cover of Sting’s “Fields of Gold” in another system–the sound was steely and hyperdetailed with an odd silvering of top end energy. (While this tune’s sonics are overrated Cassidy’s performance is such a gem that it constantly ends up in heavy rotation at these affairs.)  However as I seated myself in the Zesto room the sound was much less steely, warmer,  and beautifully dimensional within the framework of the modest listening space. Sonically, a completely different take on the identical track. Was it  attributable to the LP based, tube powered system or the setup? A little of both but mostly I think to the patience and experience of the exhibitors, Wywires Alex Sventitsky and Zesto’s George Counnas. 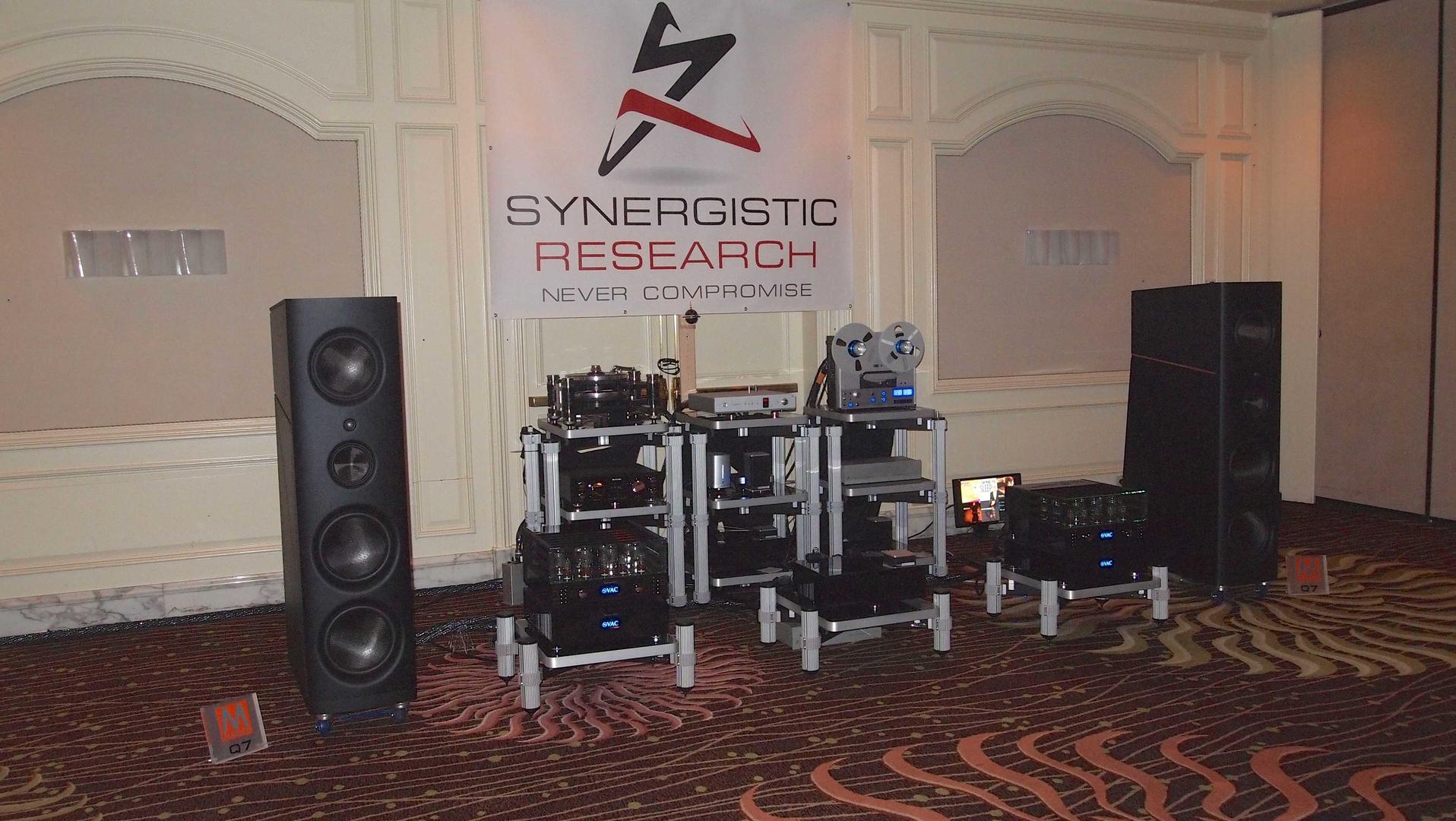 Sharing a ballroom with Scott Walker Audio of Anaheim was cable manufacturer Synergistic Research. The no-holds barred mega system was comprised of Magico Q7 Speakers ($185K), VAC Master Signature Preamp w/Phono Stage & matching Statement monoblocks; Kronos Sparta Turntable w/ Arm; Sonorus ATR Reel to Reel Machine. But this was all Synergistic’s and lead designer Ted Denney’s show. The company has been on a tear the last few years in the area of room tuning and resonance control with introducitons of critically lauded products laden with  battling acronyms like XOT and HFT and FEQ. His continuing quest to expand soundstage and imaging information to limits of the recording has led to a new product; The Black Hole bass treatment modules  are passive devices designed to operate singly or in threes (a single can be positioned out into the room, another optional pair behind the system). They did indeed appear to smooth and tighten low end response, some residual lumpiness in the midbass–quite a triumph in such a unwieldy, cavernous space. I’d love to put them through their paces in a more typical listening space. They should be hitting the market soon. ($TBD). 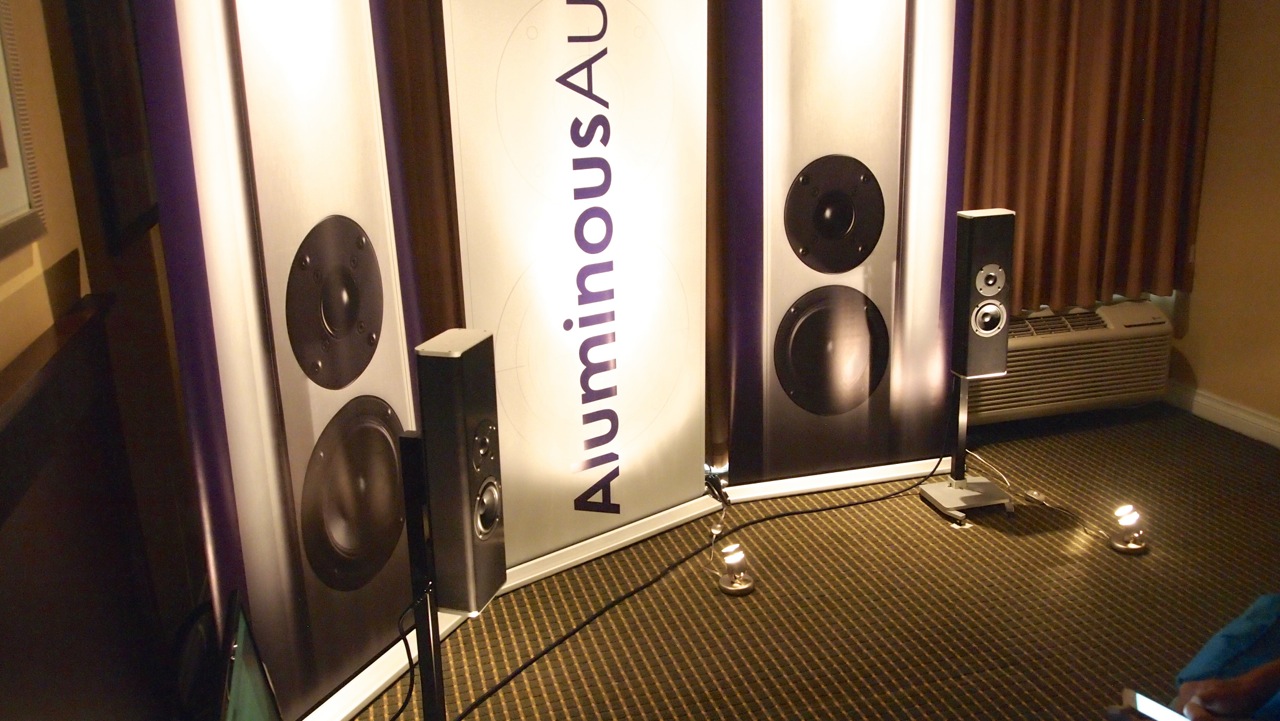 New to Newport were the Aluminous Audio speakers, a classic 2.1-channel system hand-made in Spokane Valley, WA, Using aircraft-grade aluminum, costly drivers and hand-made crossovers. the subs and sats can be purchased individually, but the monitors are only good to around 90Hz.  The AL13.02 Monitors ($15k) (87dB sensitivity) are available as stereo pairs or single speakers for multi-channel aspirations, while the AL13.01 Subwoofer ($5k) uses a 10** woofer in an sealed enclosure (roughly 13** square weight 70 lbs). The SU13.01 Subwoofer also takes advantage of the inherent strength of aluminum construction and the rigidity and damping of smaller structures. The crossover is variable from 30Hz to 120Hz and driven by an internal 175 watt class-D amplifier. The sound boasted terrific imaging and a credible disappearing act but overall tonal balance was a little light suggesting that given the presence of dual subwoofers room setup might have been the culprit.  A promising though expensive package nonetheless. 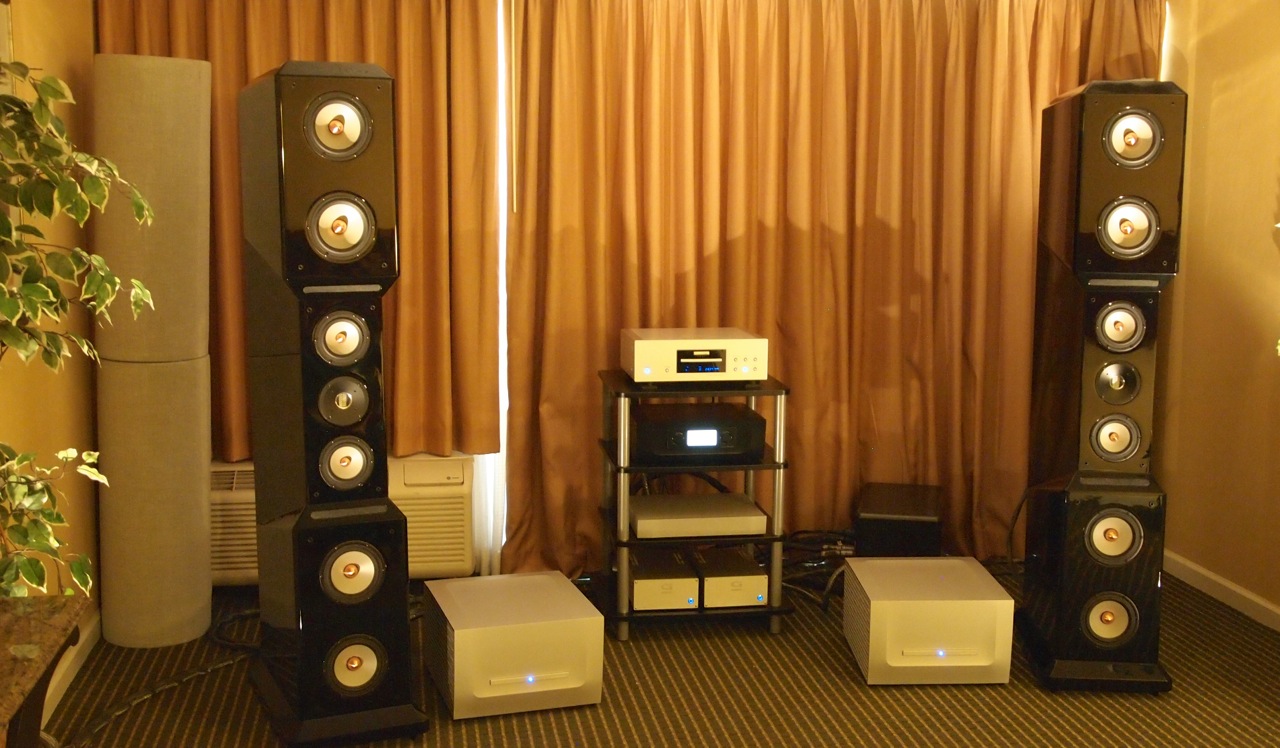 Four years in the making,  Von Schweikert Audio presented the finished prototype of its statement loudspeaker, the towering VR-100XS Universe. When fully deployed the $140,000 twenty driver system includes two outboard subwoofer modules (sans woofers in this demo) and built-in room bass correction. In the smallish room that the system was demonstrated  power was provided by Constellation monoblocks and Esoteric playback. The sense of ease and transparency sweeping through the soundspace from Ray Brown’s Soular Energy disc was as persuasive as it gets with fast transient response, zero edge distortion and a piano sound that was both harmonically sweet and extended top end. Brown’s bass was drum tight and pitch perfect. A speaker that brings the  fireworks and the finesse to music reproduction. 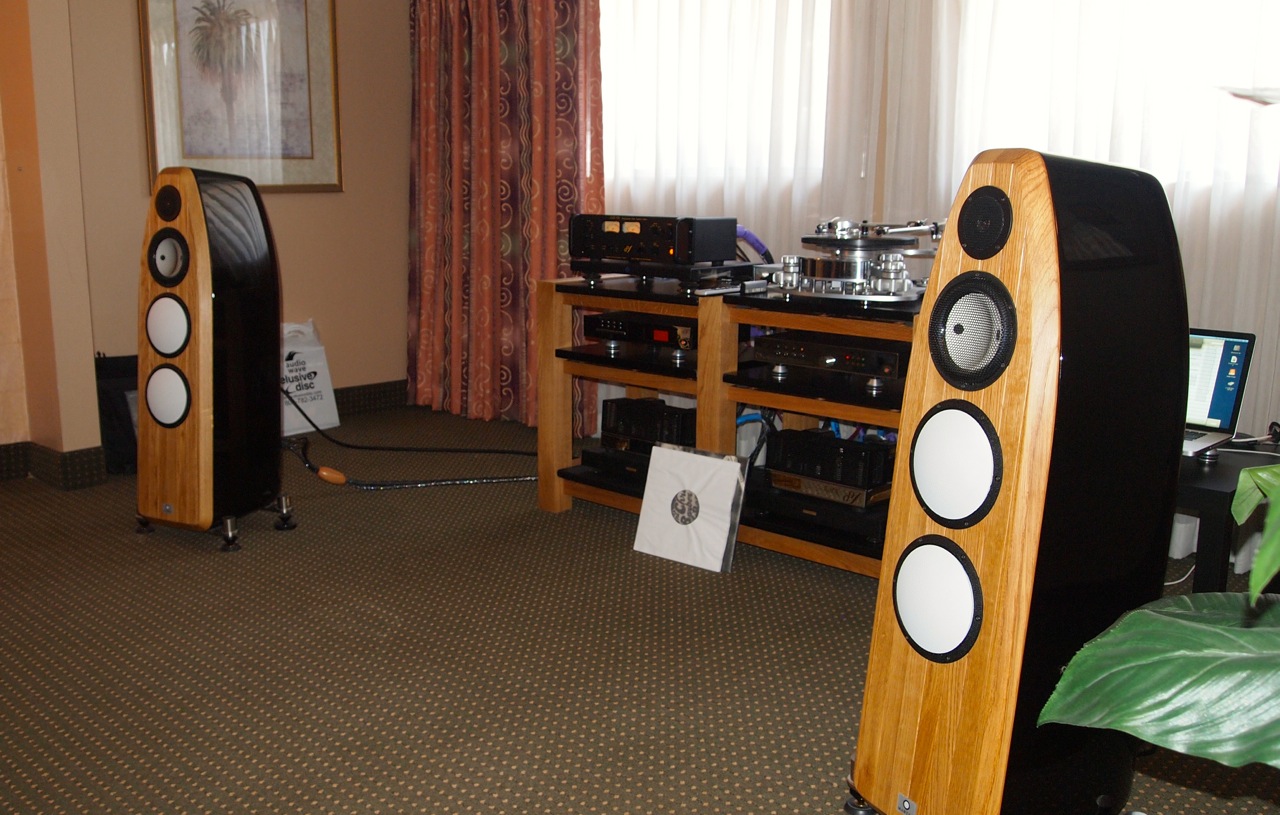 One of the most balanced and well, lovely presentations came from Dan Meinwald’s exhibit. I’ve heard the Marten Coltrane Tenor loudspeaker (pictured above, $85k) under varying conditions at different shows as well as in Meinwald’s showroom–it has never failed to impress me with its uncanny balance, tonal execution, top end transparency low end extension and punch. Ably accompanied by EAR pre and monoblock electronics and digital front end components plus EAR’s stunning Discmaster turntable/Helius Omega Silver Ruby tonearm and Jorma cabling, I later checked my listening notes in which I had scrawled, “It’s a system that does it ALL in a reasonable space”. Amen to that 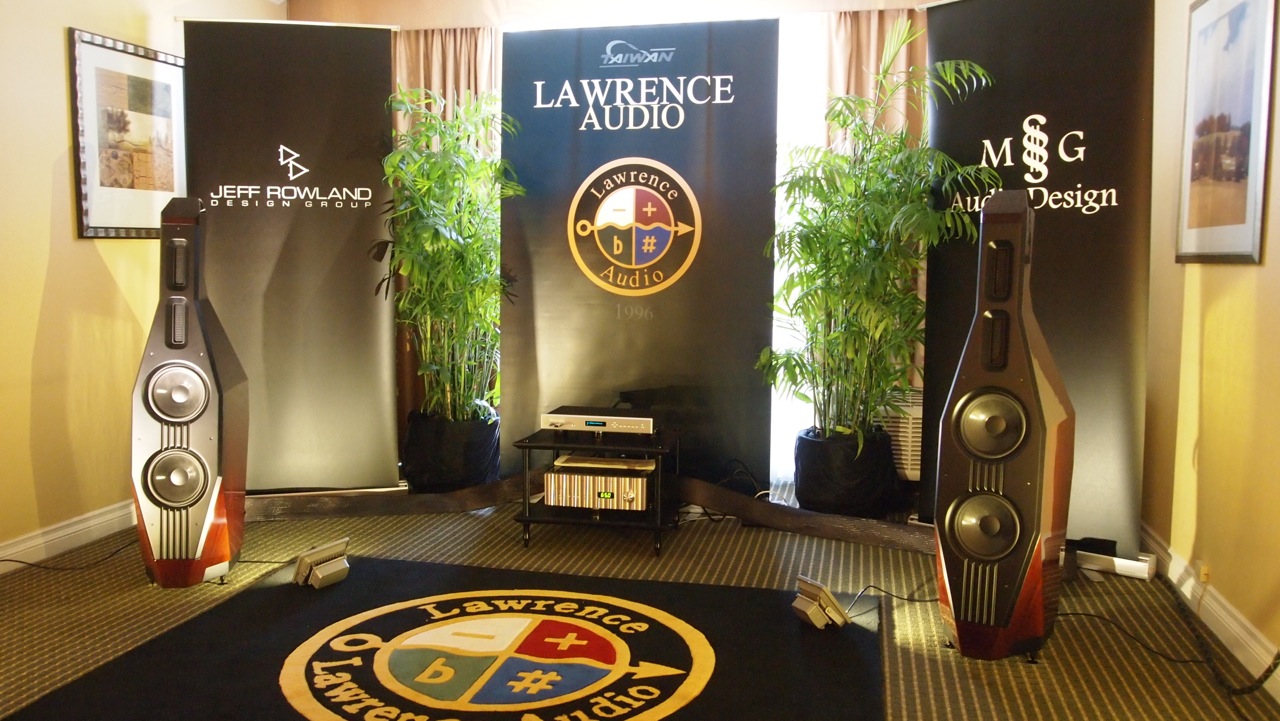 People often complain about loudspeakers looking too much like boxes but what about speakers that resemble musical instruments. Lawrence Audio (from Taiwan) calls it’s line Sonic Art and it’s a claim that’s hard to dispute. It’s Cello floorstander ($18.5k) is a 3.5-way bass reflex design with dual AMT tweeters, a pair of 8** midbass drives and a rear firing ribbon–all packaged in a complex multi-angled cello-profile cabinet.   There’s also models dubbed Double Bass, Violin and Mandolin all sized and priced accordingly. I have to admit they’re beautifully finished and might achieve a greater acceptance factor in some situations but more importantly the Cello made really good music driven with the Jeff Rowland Design Group Continuum S2 integrated and a Bryston BDP2 digital player. The sound was focused, vocal energy was richly conveyed and transient response was excellent as I would expect from the AMT drivers. And I was surprised by how well these tweeters integrated with the traditional mid-bass cone drivers, no easy stunt.

Normally I would reserve this space for some glowing exhortations about the MBL X-treme loudspeaker system but frankly I’m  flat out of superlatives having witnessed the magic, the majesty and the kick-ass intensity this system can create on many previous occasions (including at the factory). However, home cinema is something I haven’t covered for sometime and though it falls outside the purview of this report the MBL 7-channel system still brought me back to my salad days with The Perfect Vision. Viewing the 4K sampler of movies and music was not only deeply immersive and impactful, it was also detailed and nuanced in ways not dissimilar to fine two-channel at its more intimate. Some may complain that omni loudspeakers lack the directivity and image specificity recommended for home cinema but my experience with MBL gear demonstrates that with proper setup these factors can be dialed in quite satisfactorily. For the record:  The audio portion of the system included 7 channels of MBL Corona Line C15 monoblock amps, $12,500 each. mbl 111 F main left and right speakers, $42,000/pr.  mbl 120 RC (radial center) THX spec center radialstrahler hybrid speaker, $11,300  mbl 116 F pairs as sides and rears, $29,000/pair  JL Audio Gotham subwoofers (two) at $14,000 each. Kimber Select copper cabling throughout. SHun Mook Concert Hall Resonators and SMT Wing diffusor panels. The video and processor end included a DataSat RS 20i Digital Audio Processor with Dirac Live room optimization software in 7 channel configuration, $18,000; Kaleidescape Premiere Media Server, @ $18,000 as configured; Sony Ultra HD 4k projector: VPL – VW1100ES $27,999; Stewart Filmscreen 14′ wide in 16:9 configuration.

At this level it’s all about room system synergy-Perfect8’s The Force though stellar was at a slight disadvantage in a cavernous, runaway space. The Focal Grand Utopia EM however was masterful and unrelenting at every sonic level.

I’m smitten. The quintessential mighty mite Raidho X-1 is a little sweetheart of a loudspeaker that melds with smaller spaces with the tenacity of a fly strip. On its heels is the Magnepan .7– perhaps the planar buy of the year.

Most Significant Product Introduction
Muraudio Domain Omni ESL loudspeaker-read about it in Part I of my report.

The state of music downloads versus streaming services. Is it all going to cloud? Will high rez be available strictly for download streaming or both.? Tiered pricing? More questions than answers.

Lyra Etna cartridge-backordered into eternity or so it seems. Just try and get one!